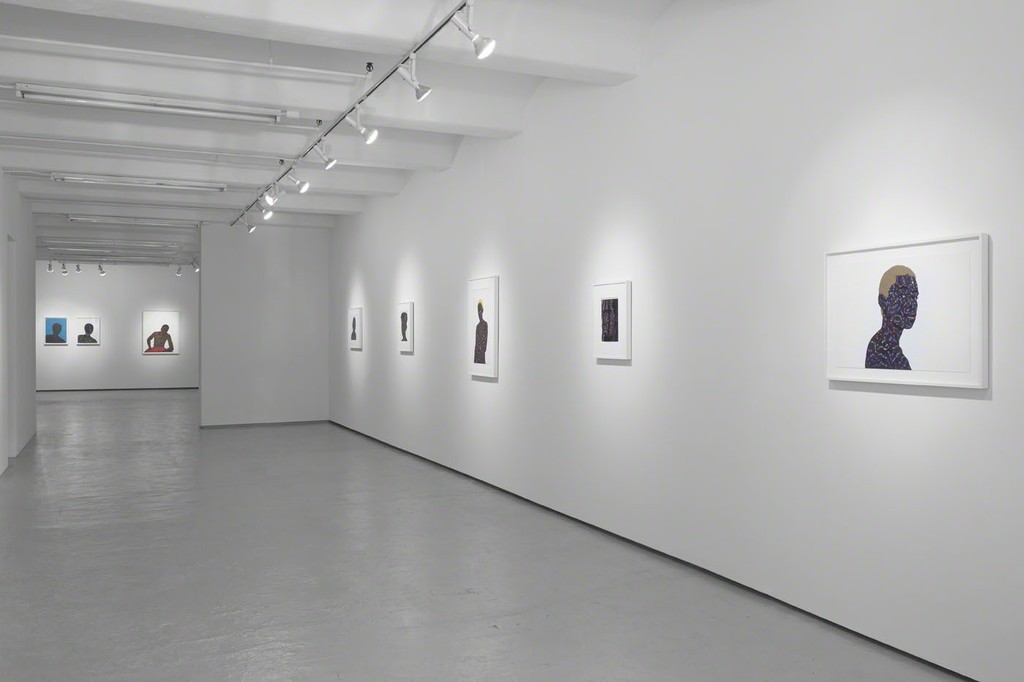 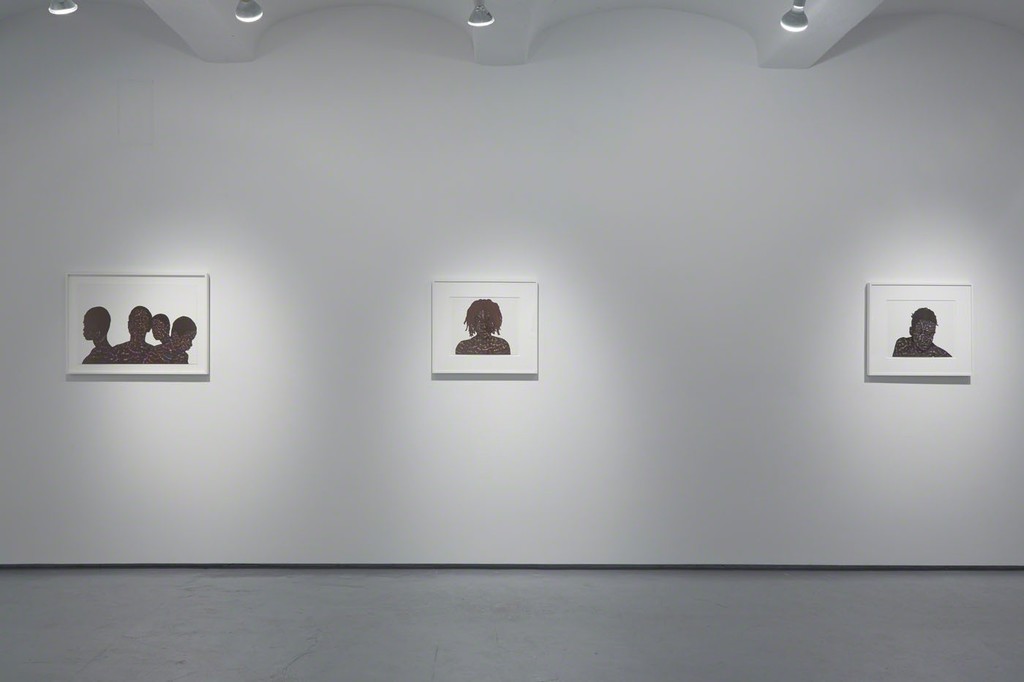 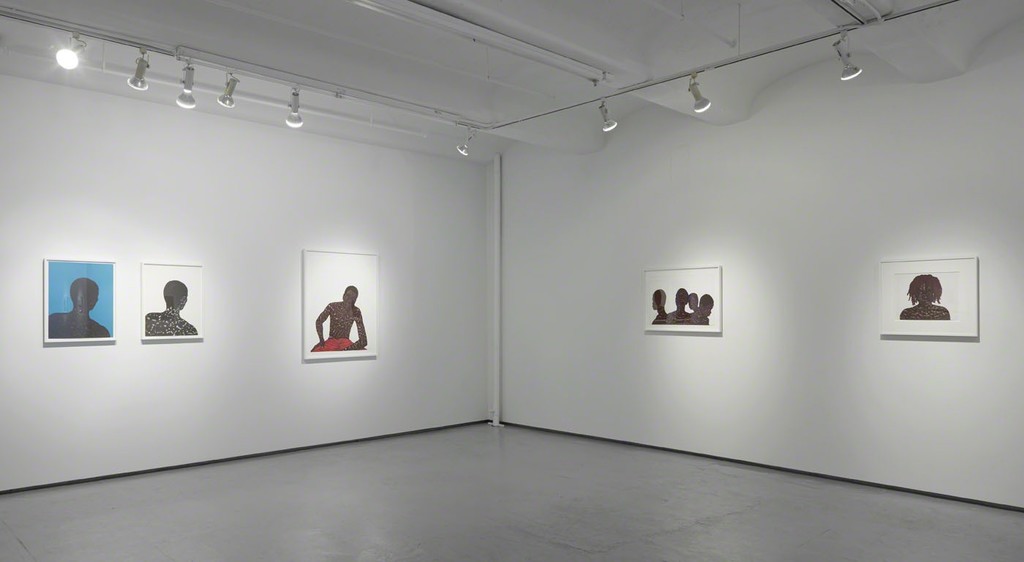 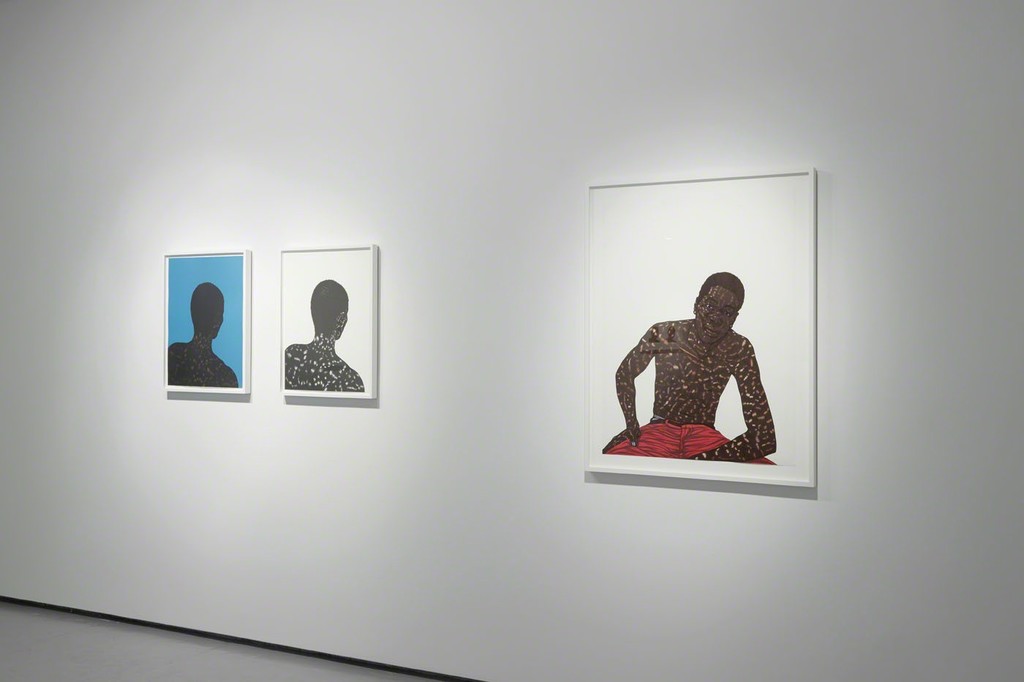 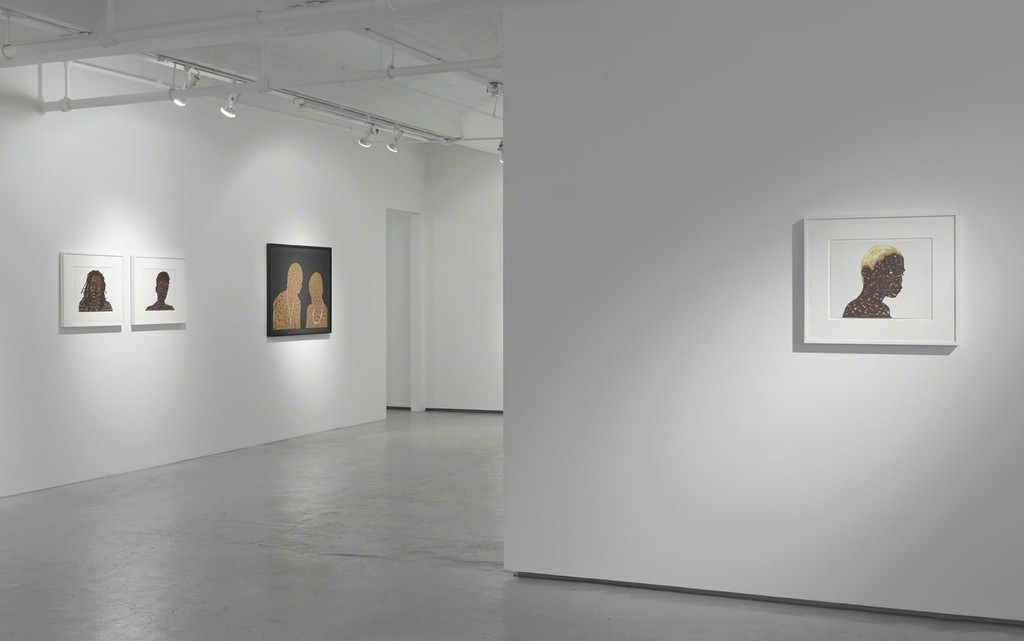 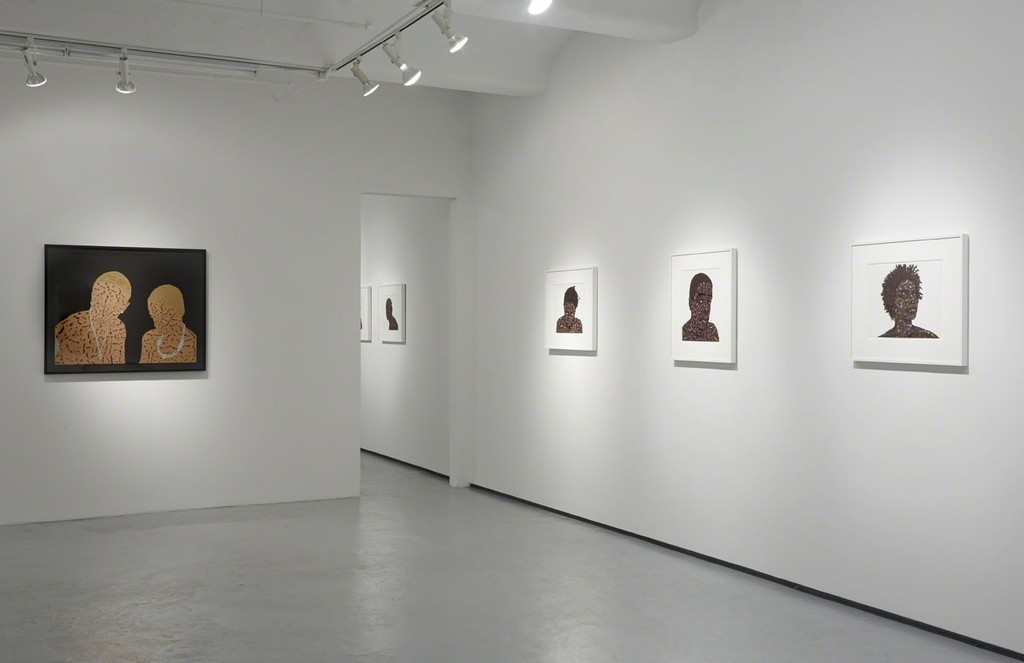 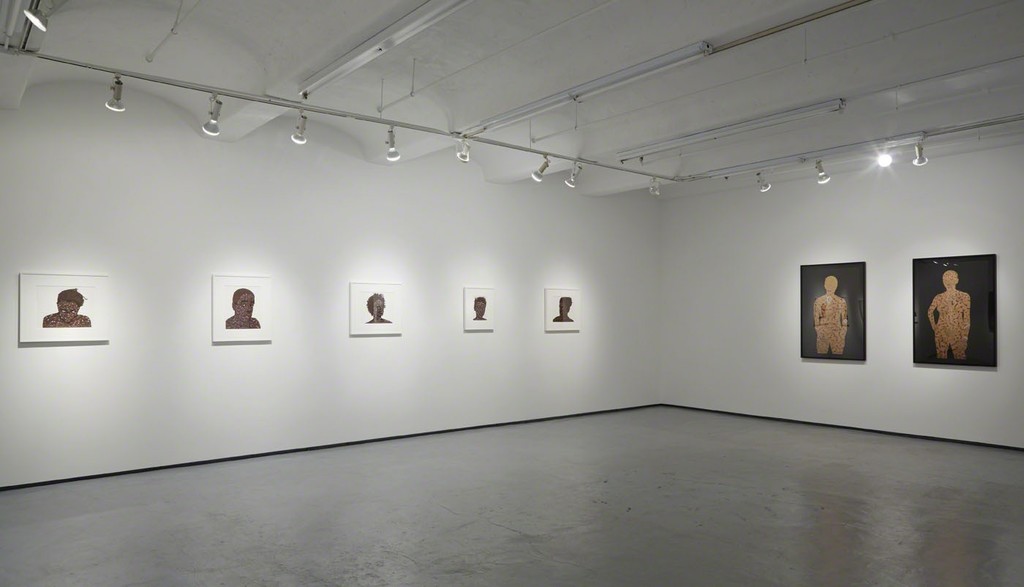 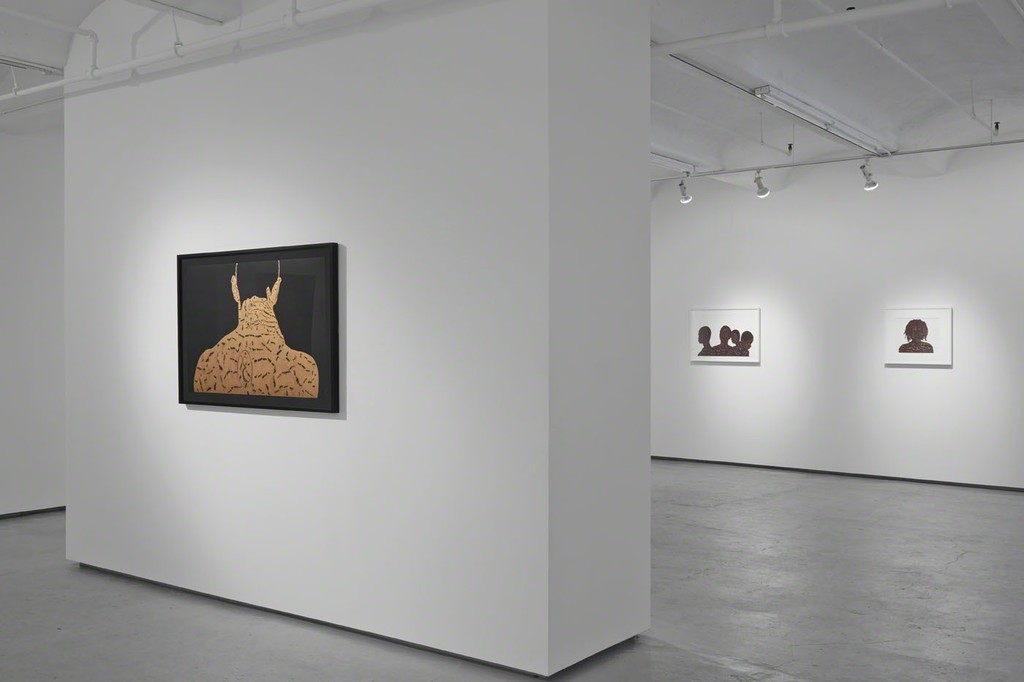 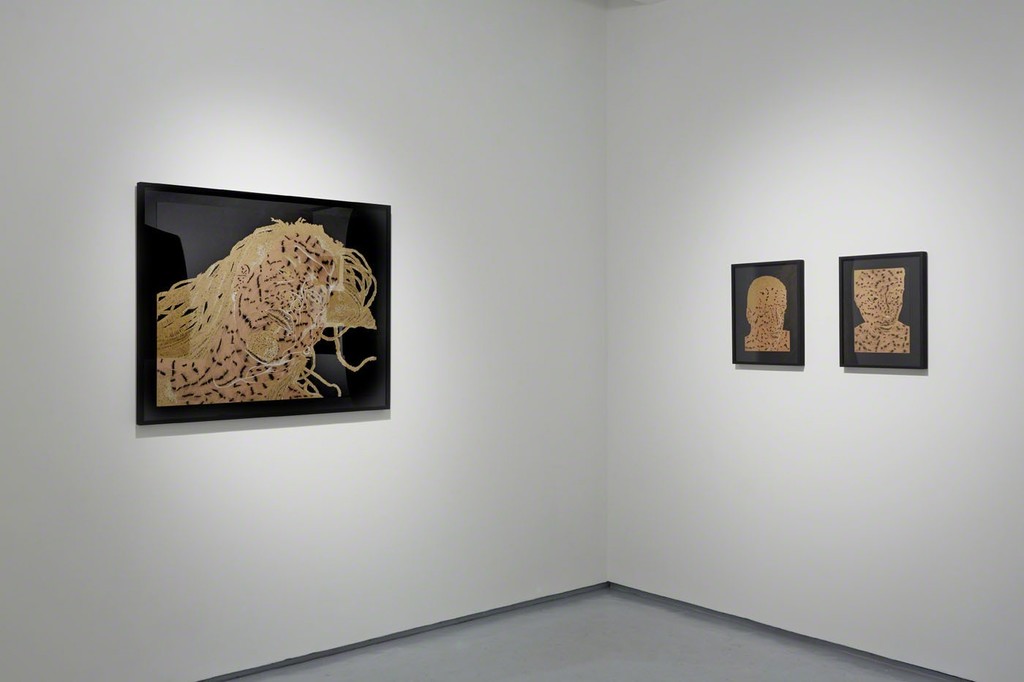 Jack Shainman Gallery is pleased to announce My Country Has No Name, an exhibition of pen ink drawings on paper, metallic marker drawings, ink on black board and new lithographs by Toyin Odutola. Together, the range of works represent Odutola’s practice which is grounded in an obsessively fine and meticulous application of line that has become the specified visual language through which she explores the human form as a landscape. My Country Has No Name is an exploration of identity rooted in the friction created by hyphenated nationalities and a study into what comes from a reconciliation of seemingly distant and divergent cultural homes to form a new multilayered reality.

Her pen markings, dense and engraved, either stand alone or cover kaleidoscopic color fields that emanate from within. The acute depictions of skin and hair both portray the figure, often Odutola, as well as reference scientific renderings of subdermal muscular structures. While concerned with the historical representation of the black subject in modern and contemporary portraiture, Odutola’s focus shifts to the transcendence of skin (color) and placement (origin), opening a field for the viewer to place themselves in the work; finding spaces to belong or to reject, to possess, to implant one’s self or to find freedom from the rejection of that space.

All These Garlands Prove Nothing is a series of self-portraits recording the range of hairstyles donned by the artist. By isolating the figure against the blank white background and repeating the subject, Odutola is confining the differences mainly to the hair and position of the body. The interest is less in style and more in the undertones and associations this specific physical embellishment provides when thinking about the pliability of identity. These works dance between the understandings of one’s own identity and the understanding of one’s identity as it relates what is being reflected back from another’s gaze.

In Come Closer: Black Surfaces. Black Grounds, Odutola uses black ink on black board to question the validity, the aesthetic and the meaning of the material aspect of blackness and how those connotations feed into social identities and as she describes, “a personal rejection of all the ideas I associated with blackness in myself”. The series Gauging Tone employs the same black board, but instead of black ink, Odutola uses a metallic Sharpie to cast lines and fill the negative space. Odutola questions the inversion of her own aesthetic and in doing so looks upon the equally problematic proposition of how black people see one another.

Toyin Odutola, born in Nigeria, currently lives and works in Alabama. Her work has been exhibited throughout the United States. Selected group exhibitions include Ballpoint Pen Drawing Since 1950, Aldrich Contemporary Art Museum, Ridgefield, Connecticut, 2013; The Progress of Love, Menil Collection, Houston, Texas, 2012-2013; and Fore and Gordon Parks: A Harlem Family 1967, The Studio Museum in Harlem, New York, 2012-2013. She is a recipient of the Murphy and Cadogan Fellowship Award; Ellen Battell Stoeckel Fellowship Grant, Yale/Norfolk; and the Erzulie Veasey Johnson Painting & Drawing Award. She is included in the public collection of the Birmingham Museum of Art, Birmingham, Alabama; The Contemporary Museum, Honolulu, Hawaii and The National Museum of African Art, Smithsonian Institution, Washington, D.C.