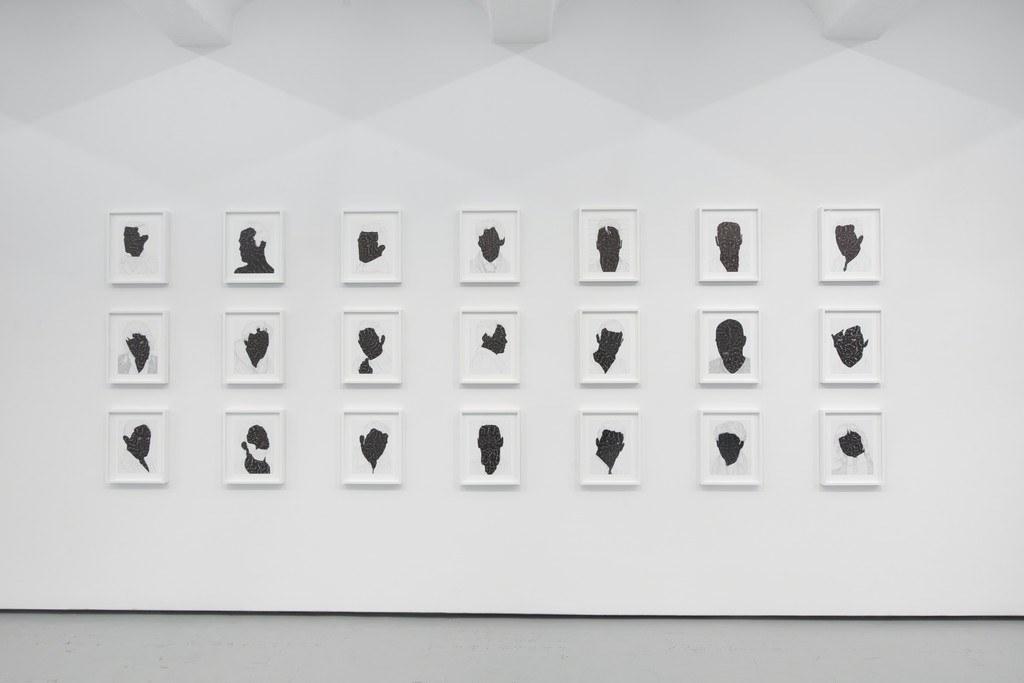 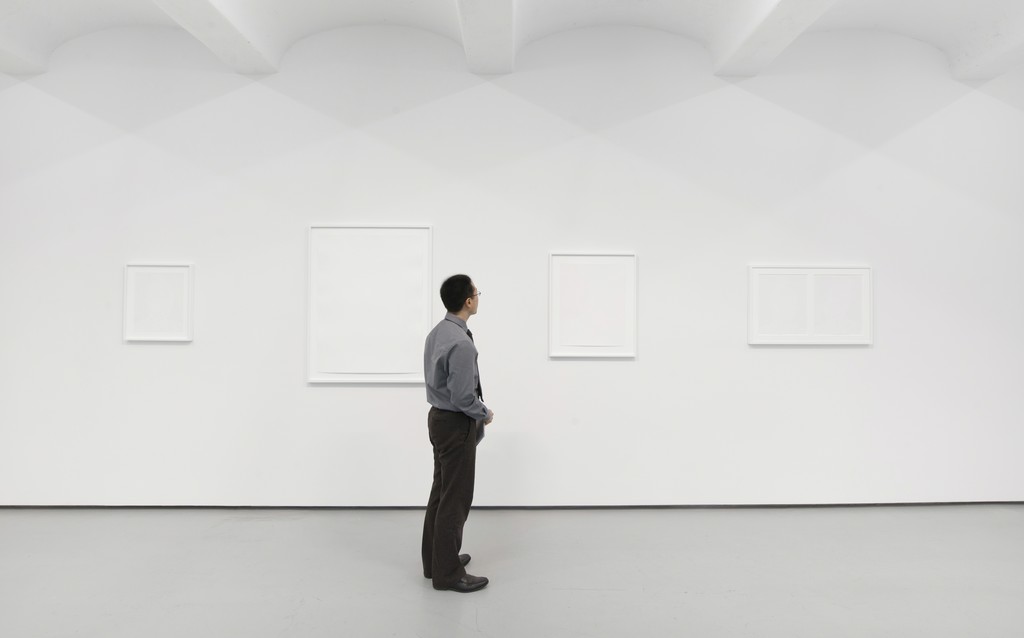 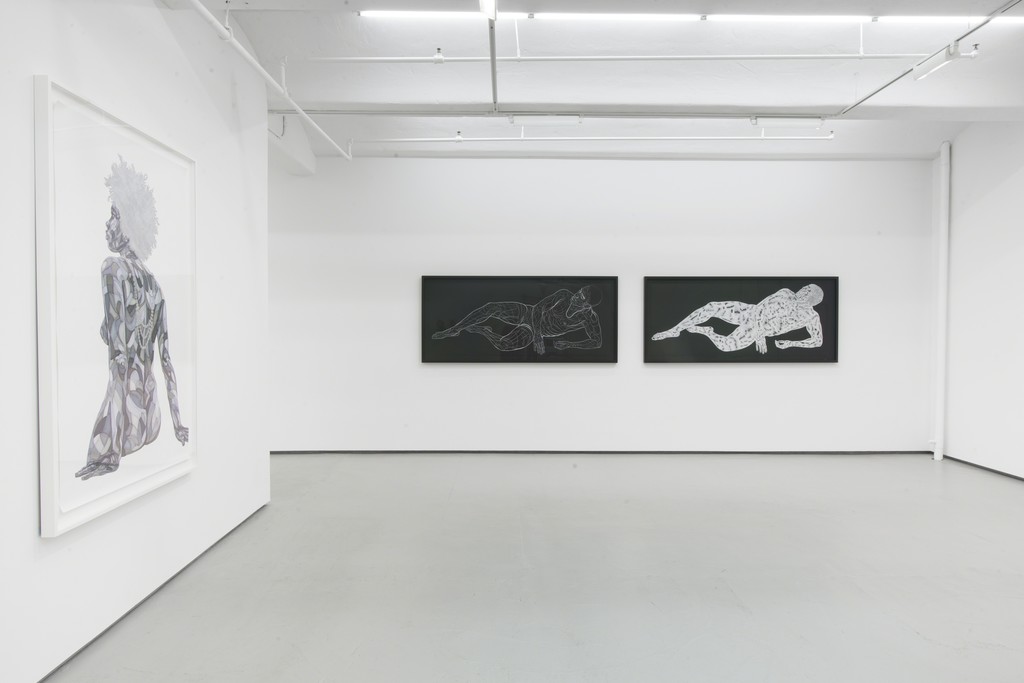 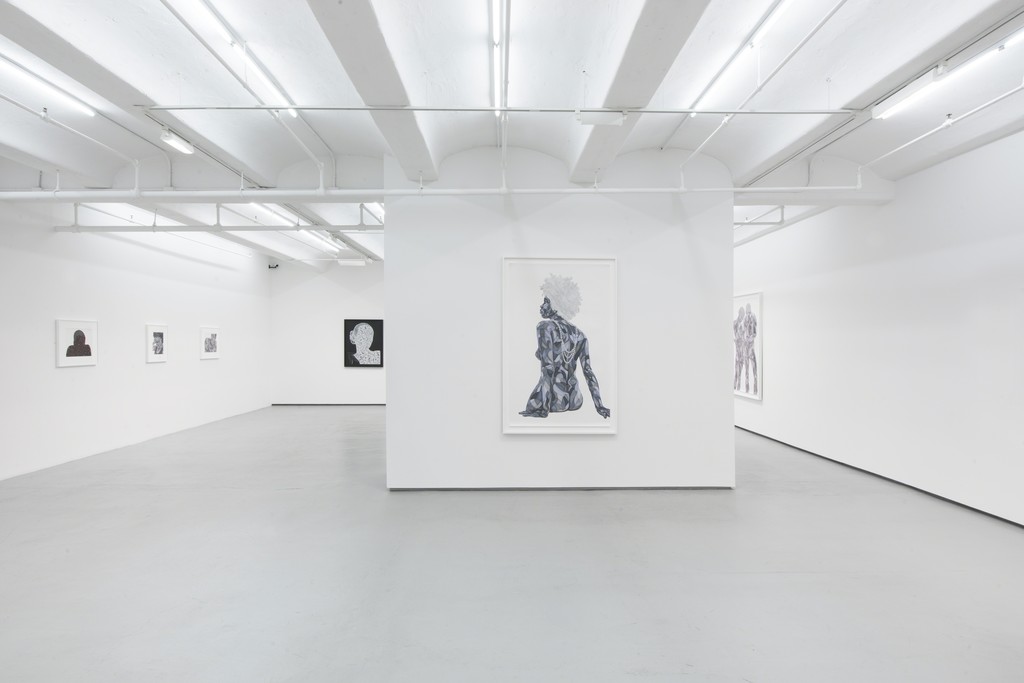 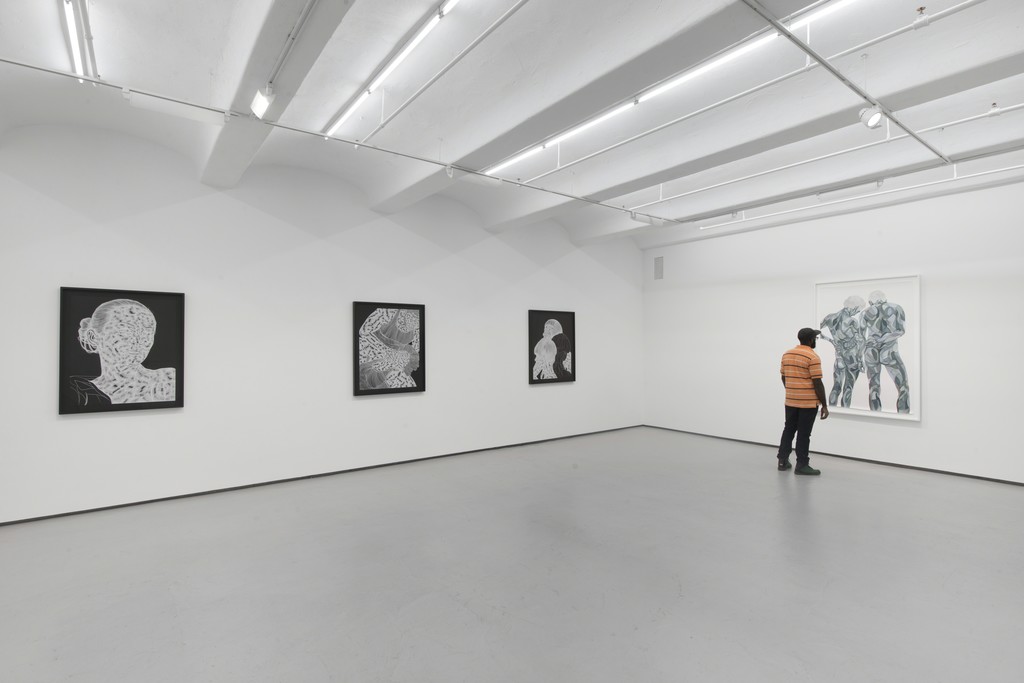 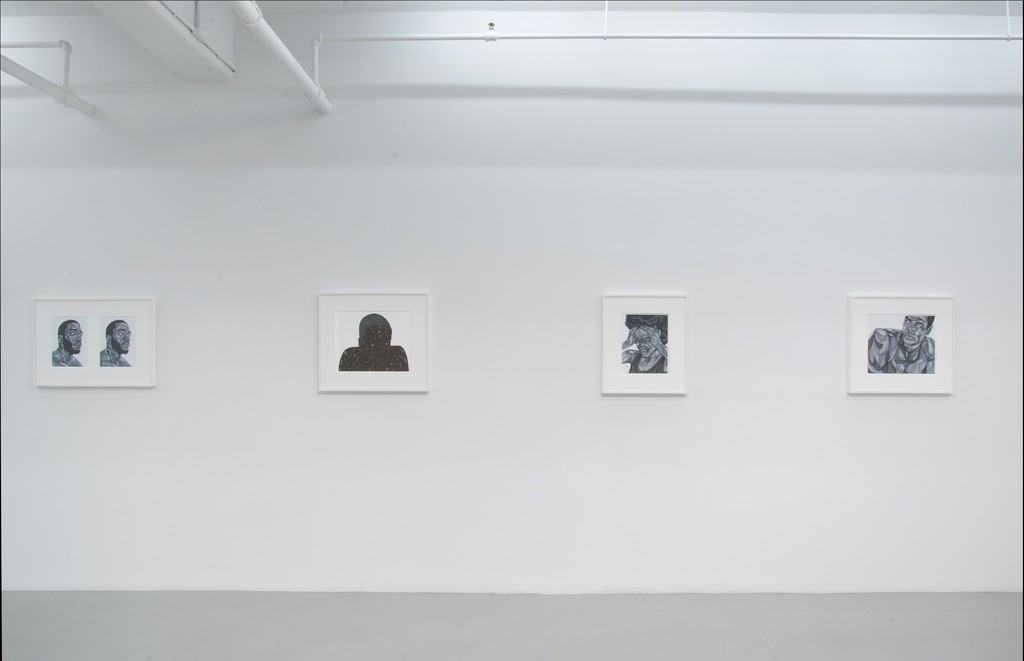 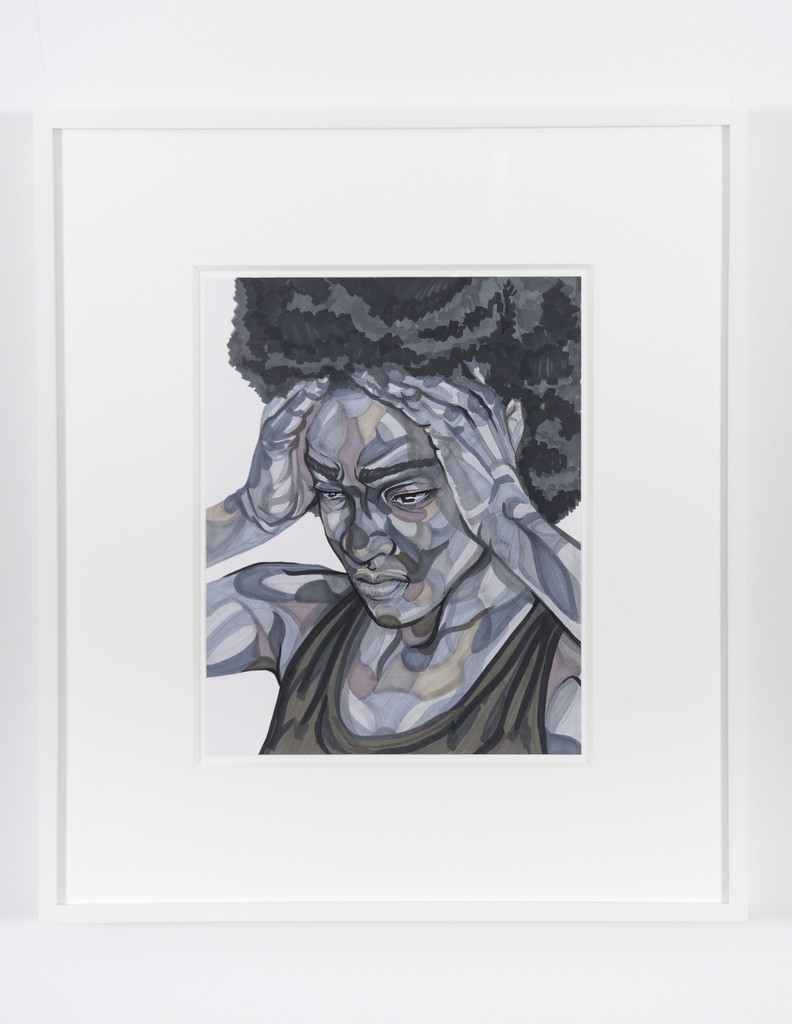 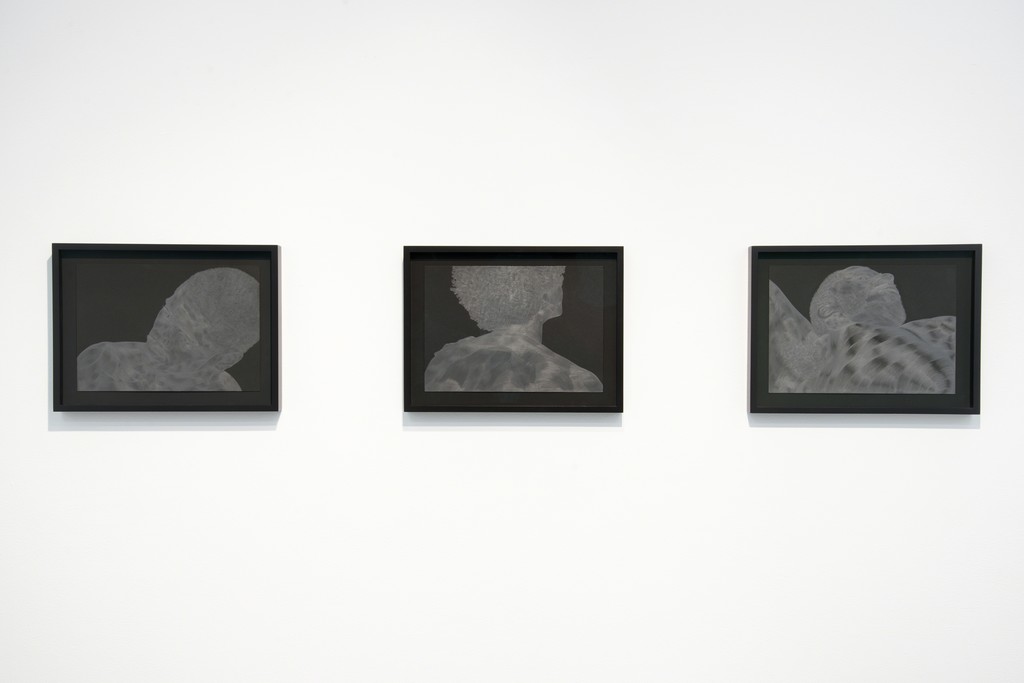 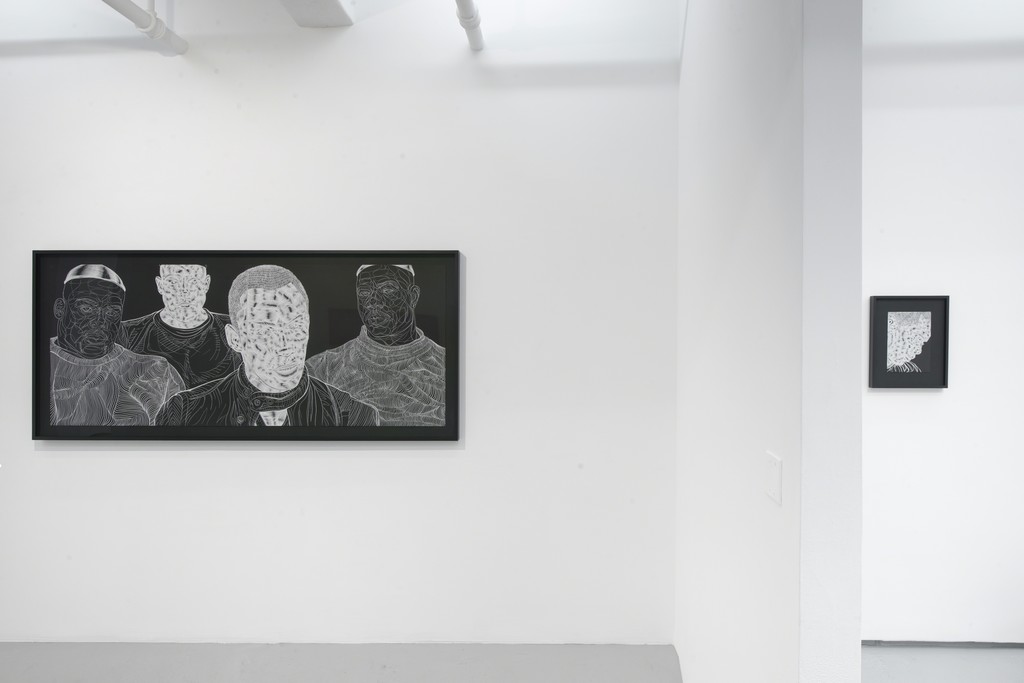 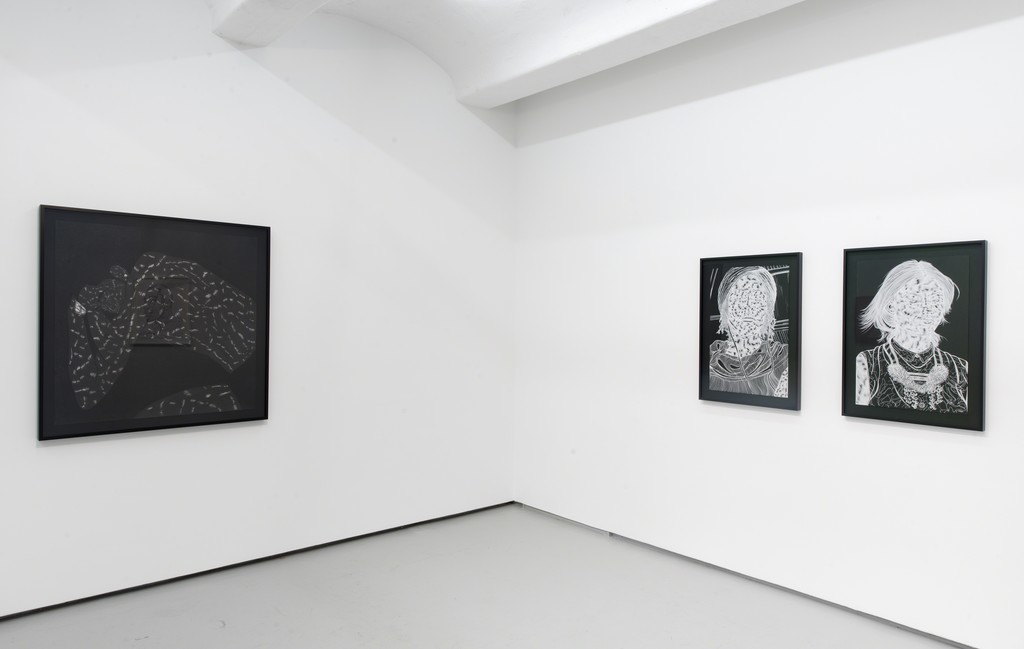 Jack Shainman Gallery is pleased to announce Of Context and Without, the fourth solo exhibition by Toyin Ojih Odutola at the gallery. In this selection of new drawings, Ojih Odutola incorporates chalk, ink, pen, and marker into textured portraits addressing the interplay between line and form, as well as context and perception. The subjects in the exhibition have been pulled from the vastness of everyday imagery, but Ojih Odutola transforms them into studies of mark-making and material, the results denying placement in any stable setting.

The bracing contrast of white charcoal on black board marks a new direction within Ojih Odutola’s practice. Study of Aldo I and Study of Aldo II, 2015 exploit negative space, underscoring an overall reversal and creating a disorienting effect. Further obscuring immediate recognition, in And She Accepted This, 2015 the same lines that delineate body parts and facial features are analogous to the lines describing skin, therefore complicating the discernment of identity—at first glance, limbs tangle into other limbs, the striation of skin infuses the work’s surface.

Ojih Odutola’s embrace of the line freed from color allows for a focused exploration of the line itself. In art theory, the line orders and controls while color is pure freedom and emotion. In Ojih Odutola’s hands, the line is still a deliberate, often highly intricate mark, but it problematizes its own clarity, pulsing with an energetic rhythm that redefines what a line can do. In The Object is the Technique + The Technique is the Object, 2015, swaths of gray, black, white, and navy come together to form the contours of a woman’s body. This camouflage-like patterning, however, does not disguise its subject, but rather points to its process—the marks describing the blocks of shading are left as distinct lines, evidence of their making.

The Treatment, 2015 further builds on this investigation of the limits of the line. For this series, Ojih Odutola culls images from an array of references, including the art world, pop culture, and politics. Translated into graphic black and white portraits, the subjects take on an uncanny uniformity, denying their individuality and therefore their explicit recognizability. Here, the most detailed marks are concentrated in the faces, while the hair and clothing are left unfinished. The sources are intentionally not named, leaving the viewer to contemplate not only the elusive nature of the subject, but the motivations behind interpretation and the desire to project values onto an image. By complicating the line’s ability to delineate identity, Ojih Odutola’s portraits resist categorization.

Ojih Odutola was born in Ile-Ife, Nigeria in 1985 and currently lives and works in New York. Recent solo exhibitions include Toyin Odutola: Untold Stories, Contemporary Art Museum, St. Louis, Missouri, 2015 and Toyin Odutola: The Constant Wrestler, Indianapolis Museum of Contemporary Art, Indiana, 2013-2014. Her work is currently on view in Black: Color, Material, Concept, Studio Museum in Harlem, through March 6, 2016, and Disguise: Masks and Global African Art at the Fowler Museum through March 13, 2016 and traveling to the Brooklyn Museum in April, 2016.