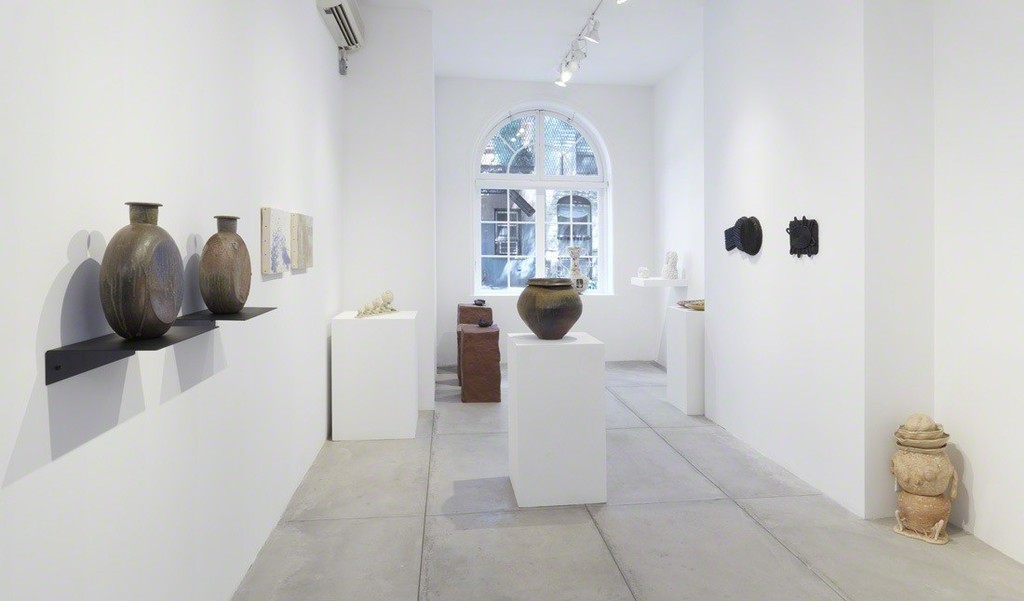 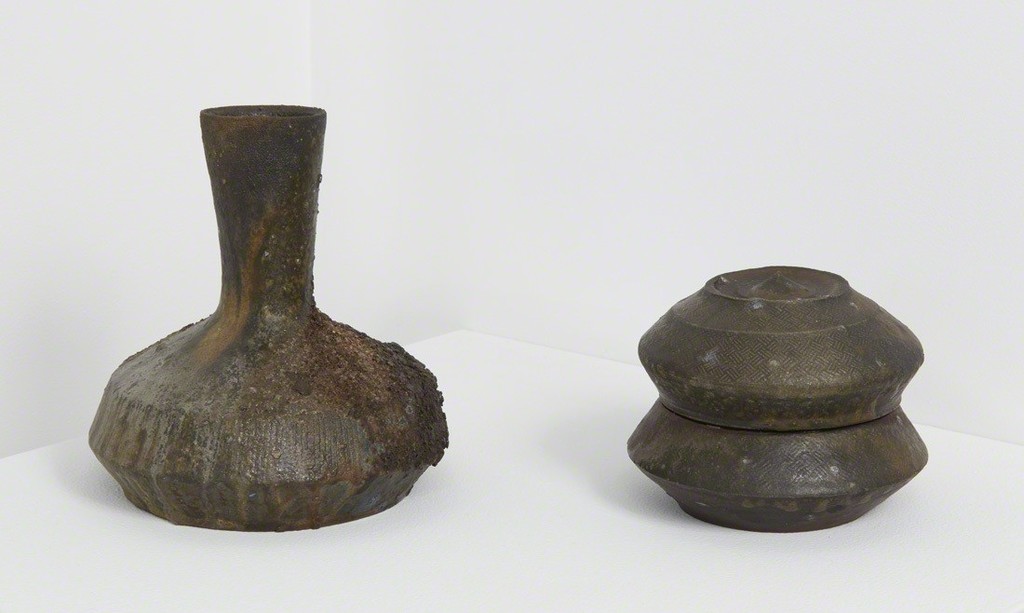 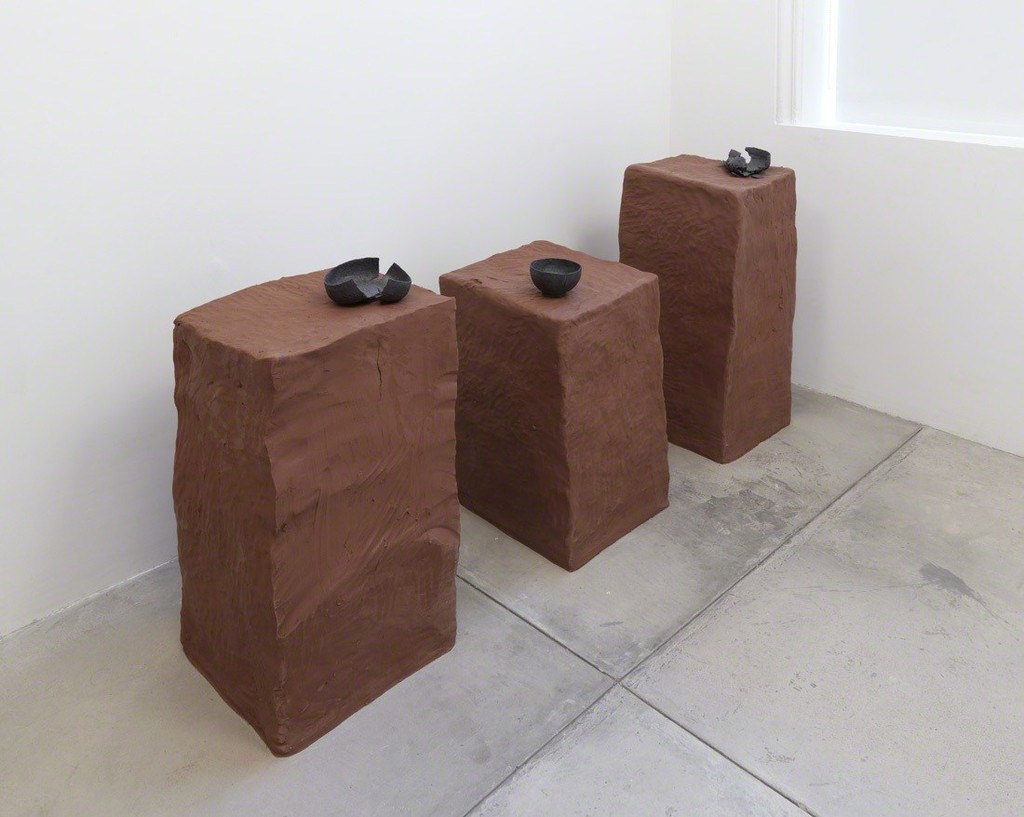 The Jane Hartsook Gallery is pleased to present work by our 2017-2018 artists in residence: Nicolás Guagnini, Samuel Johnson, Pam Lins, Linda Lopez, Mathew McConnell, Eun-Ha Paek and Rirkrit Tiravanija. The Greenwich House Pottery residency is a distinguished program that fosters artistic growth by providing artists with a creative community, time, space, material and technical skill to explore and generate new bodies of work in ceramics in the center of the art world.

Contemporary artist, writer and filmmaker Nicolás Guagnini works across disciplines to engage with concepts of labor, capital and masculinity. His exhibitions frequently mix mediums—ceramic sculptures are paired with books from his personal library, flowers, ink-soaked pedestals, critical writing and unique text design—with every component adding a layer of meaning deeply tied to the project’s philosophical basis. Guagnini used his residency to work on large-scale ceramics sculpture.

Samuel Johnson is a potter known for his woodfired utilitarian pottery. He sees the uneven shapes and dark varied surfaces of his finished work as a reflection of humanity’s capacity for reason and mathematical precision while simultaneously being half-wild, full of biological and spiritual mysteries. Johnson is using his residency at GHP to develop new forms in utilitarian ceramics.

Primarily a sculptor, Pam Lins works across disciplines using classical to contemporary art, craft and design forms to question the nature of sculpture and materiality. During her residency, Lins developed a collaborative project with artists Trisha Baga and Halsey Rodman and approximately 50 other artists to create and decorate ceramic and mixed-media artwork that will culminate in December at Greene Naftali Gallery in what Lins, Baga and Rodman hope will be an unruly event that is simultaneously a party, a play, a show, a cocktail lounge, a conversation circle and a fundraiser.

Linda Lopez creates sculptures that anthropomorphize the objects around us. She is perhaps best known for her “dust fury” sculptures, round or oblong creatures composed of hundreds of drops of clay, often sprinkled with gold luster nuggets of “lint.” Resisting the idea that objects are inanimate, Lopez studies objects and their relationships to one another to discover their psychological states and personalities, which she reveals in her work. Lopez continued this investigation during her residency.

Mathew McConnell uses his studio practice to explore concepts of authorship and to consider the developing art historical moment. McConnell begins with the work of other visual artists, sometimes making what appear to be exact facsimiles of the works, sometimes reinterpreting them beyond recognition, but always with a mind towards understanding the moment at which the work becomes more his than theirs. McConnell’s 2016 solo show in the Jane Hartsook Gallery was hailed by art historian and critic Garth Clark as, "a new benchmark for himself, the field and the genre."

Eun-Ha Paek is an animation filmmaker and illustrator based in Brooklyn, NY who creates narratives that use humor to process the full range of human emotion. She brings the characters in these narratives into the physical world through ceramics, creating sculptures that are familiar and yet strange—at times dark, but always playful. As a fellow, Paek considered the mutability of memory. She 3-D scanned and printed hand-built sculptures and then scanned and printed each subsequent iteration of the sculptures, allowing the regular defaults in the process to accumulate. In the same way that parts of a memory gain or lose resolution over time, the sculptures slowly mutated with each remaking.

Artist Rirkrit Tiravanija is perhaps best known for creating installations and events that emphasize social engagement, though he creates traditional material-based art as well. He made a name for himself in the early 90’s by eschewing typical visual arts practices and engaging audiences by cooking for them. He has continued this practice in relational aesthetics with subsequent installations, and made it a part of his residency—cooking steak in his handmade flameware to make lunch for the Pottery’s community. Tiravanija used his time at GHP to expand his work on the potter’s wheel and experiment with forms based on the teabowl.