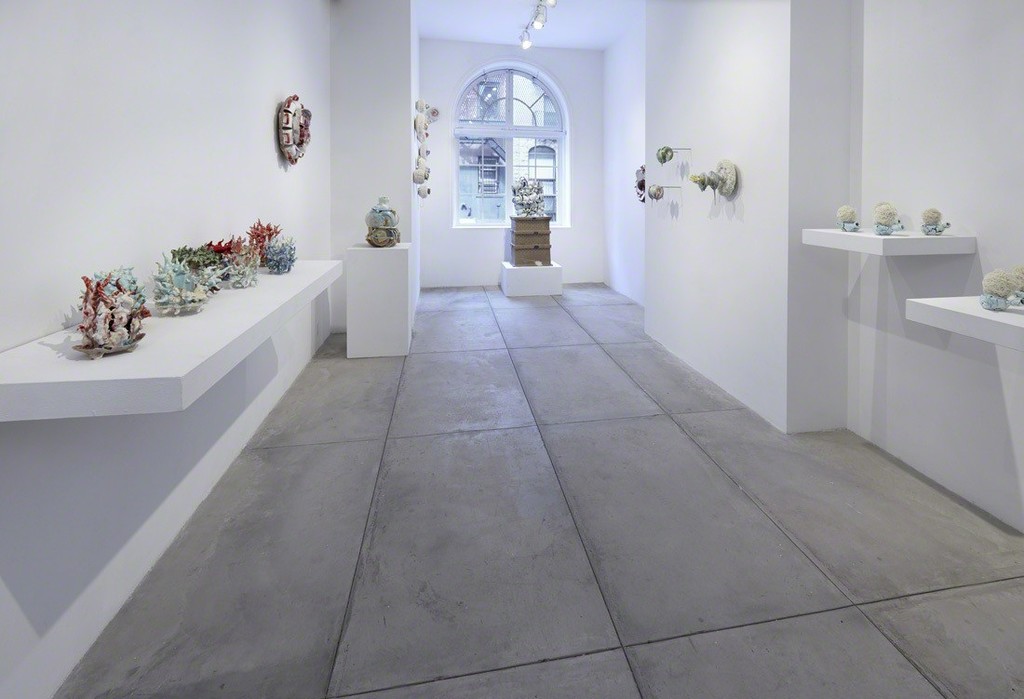 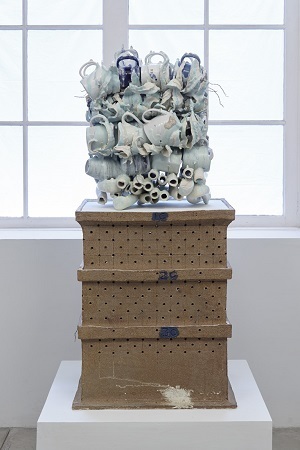 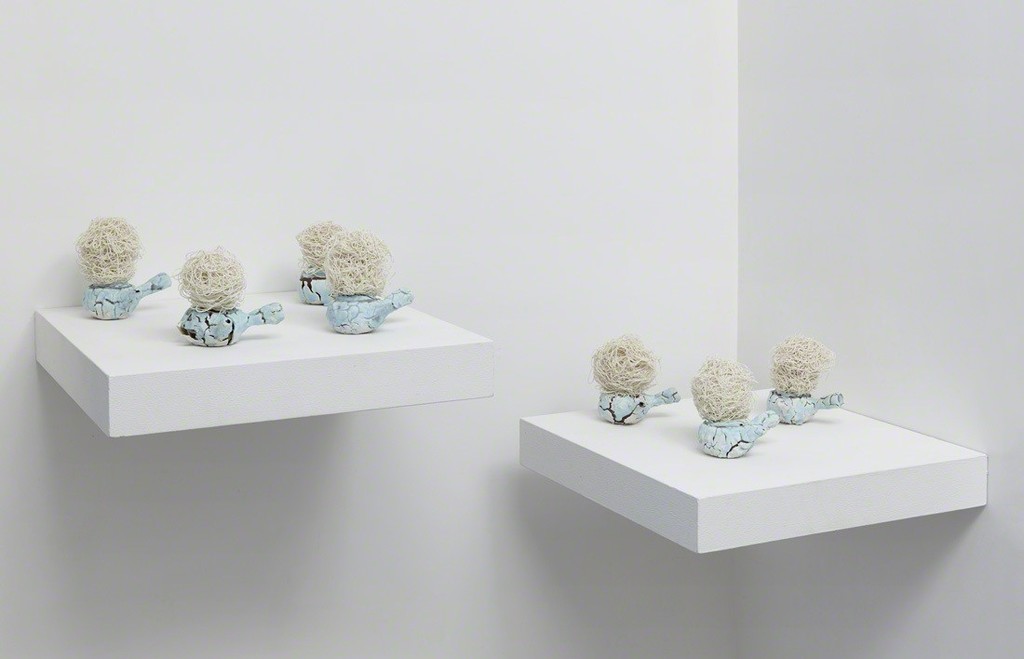 The Jane Hartsook Gallery is pleased to present new work by Daniel Bare. Bare’s sculptures are a critique on the wastefulness of American consumerism. He collects unwanted pottery from thrift stores, landfills and abandoned kiln sites and assembles them into stacks that often seem posed on the brink of collapse. Highlighting the uniformity of mass produced goods, Bare stacks similar items together making it seem as though they are replicating of their own accord. Other forms are more organic, resembling marine landscapes or waves of discarded consumer goods poised to overwhelm the viewer.

Bare creates his sculptures by stacking the mugs, plates and bowls in a saggar container inside the kiln, often securing precarious forms with nichrome wire. He drips casting slip and glazes overtop, squirting or “glopping” glazes by hand, spatula or glaze bulb – a tool similar to a turkey baster. This added glaze and the liquid clay, or casting slip, work in tandem with the glaze on the collected pottery to fuse it into a finished sculpture. These found objects add an element of the unknown since Bare is not always sure what temperature they can withstand, which sometimes leads to his sculptures collapsing unexpectedly during firing. The saggar containers protect the inside of his kiln from being ruined by clay or glaze that melts unpredictably. Bare pushes his materials to this precarious brink – hoping they shift or slump in the heat of the kiln without fully collapsing. The resulting fusion of individual objects into a unified whole adds to the unsettling sense that each of these sculptures will continue to grow and absorb more material, eventually overtaking everything in their path.

Bare is a full-time Lecturer in the Art Department at Clemson University. He has called the Upstate of South Carolina home since 2010. Born and raised in Lancaster, PA, he earned his MFA in Ceramic Art from Alfred University (Alfred, NY) and BFA in Crafts/Ceramics from the University of the Arts (Philadelphia, PA). His practice in clay and professional experience includes international and national artist residencies at acclaimed programs in China, Japan, Canada and the United States. His ceramic work is featured in Glaze: The Ultimate Collection of Ceramic Glazes and How They Were Made (2014), as well as 500 Ceramic Sculptures (2009), 500 Teapots Part I & II (2002; 2013). He exhibits and presents public lectures about his work at Beijing Fine Art Academy in China, the Michigan Ceramic Art Association, the National Council for Education in the Ceramic Arts (NCECA) conferences and many universities and art centers in the US and abroad.