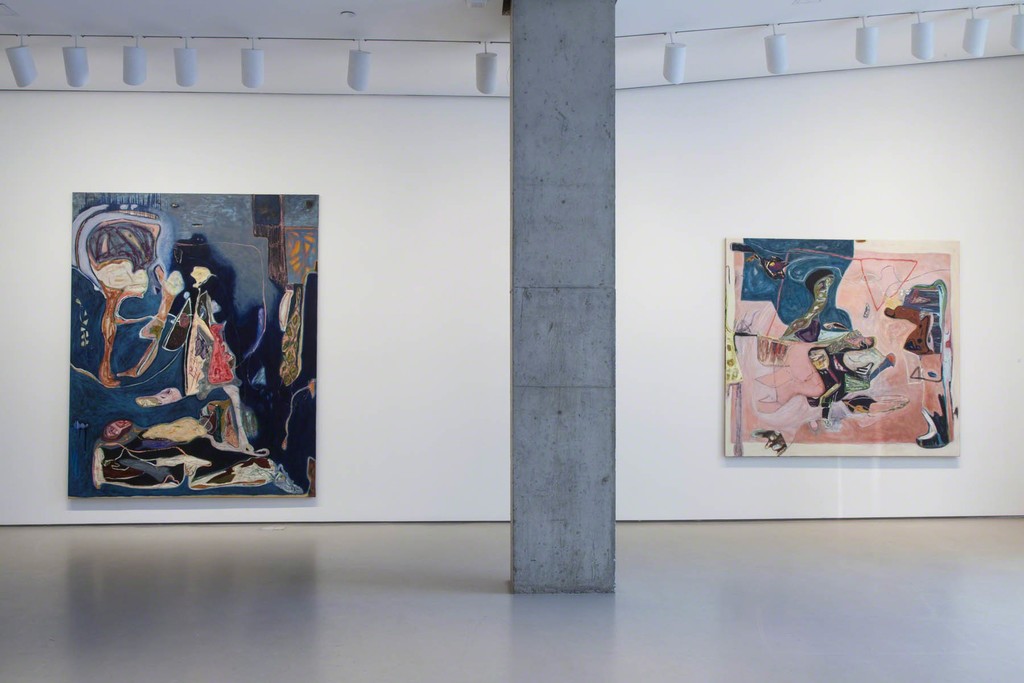 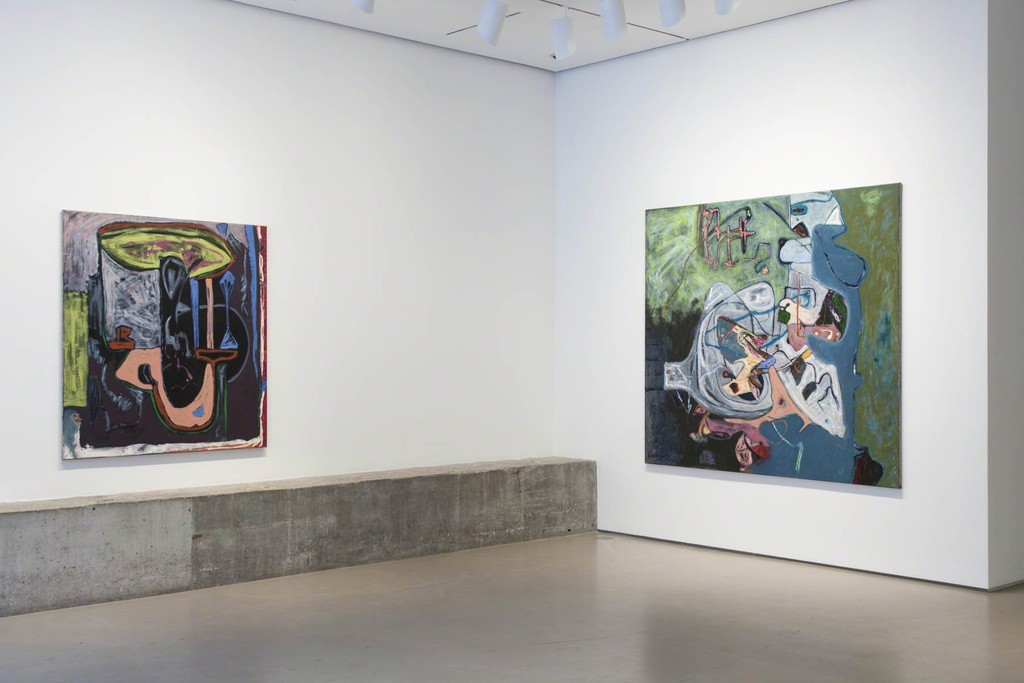 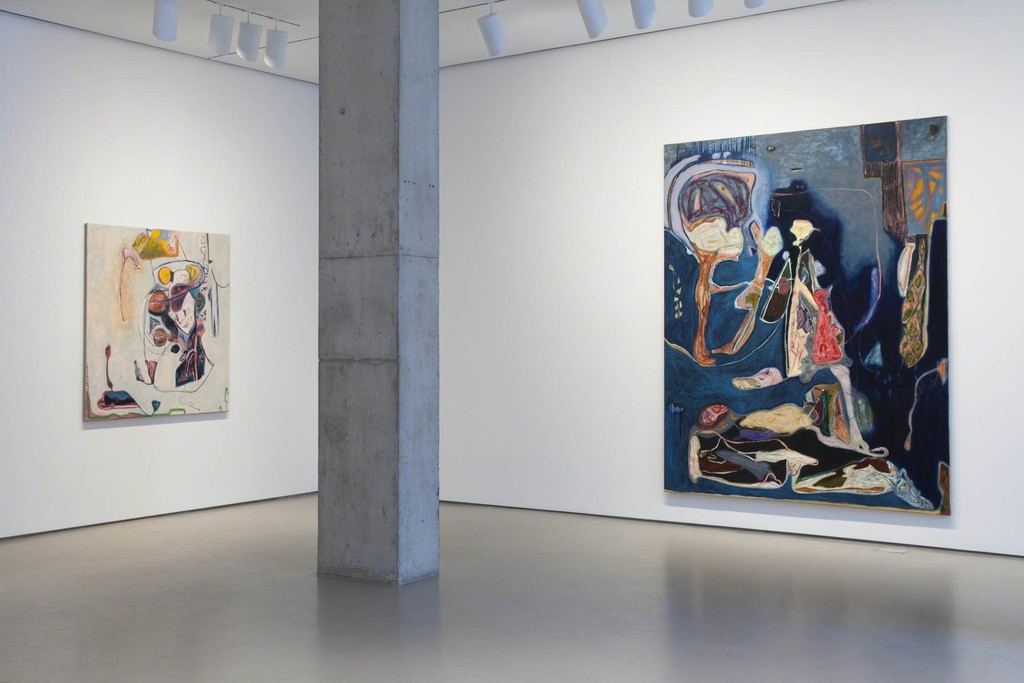 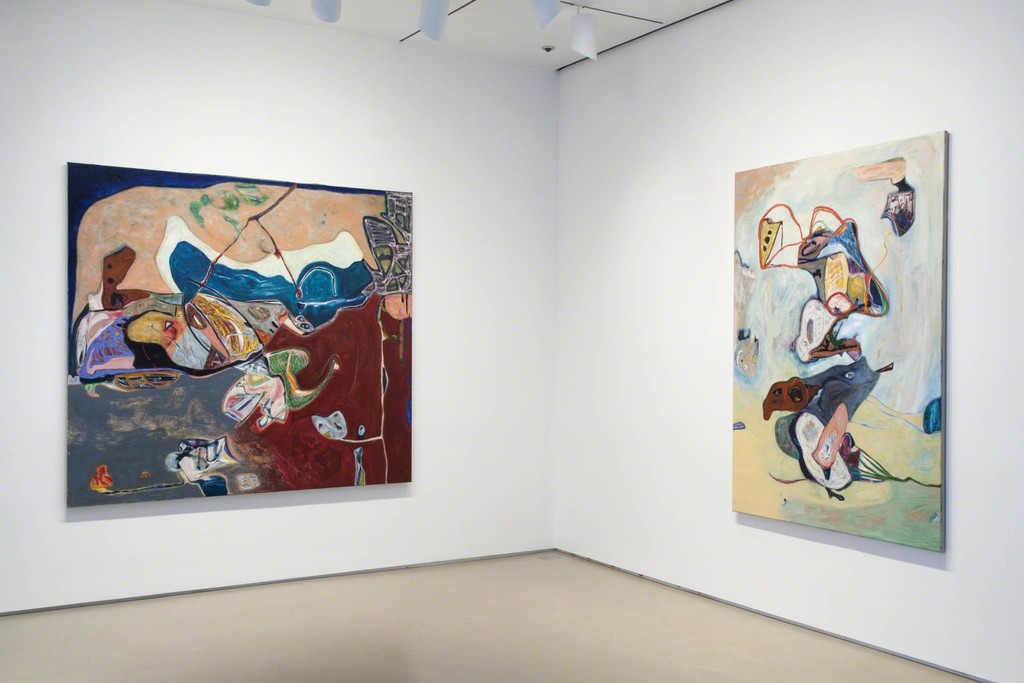 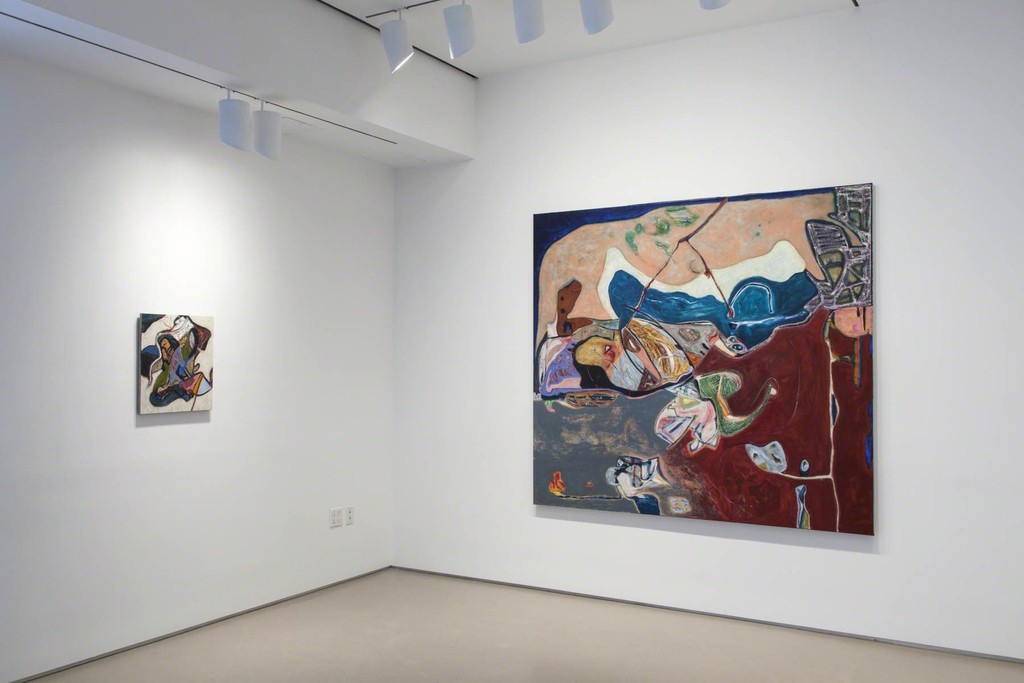 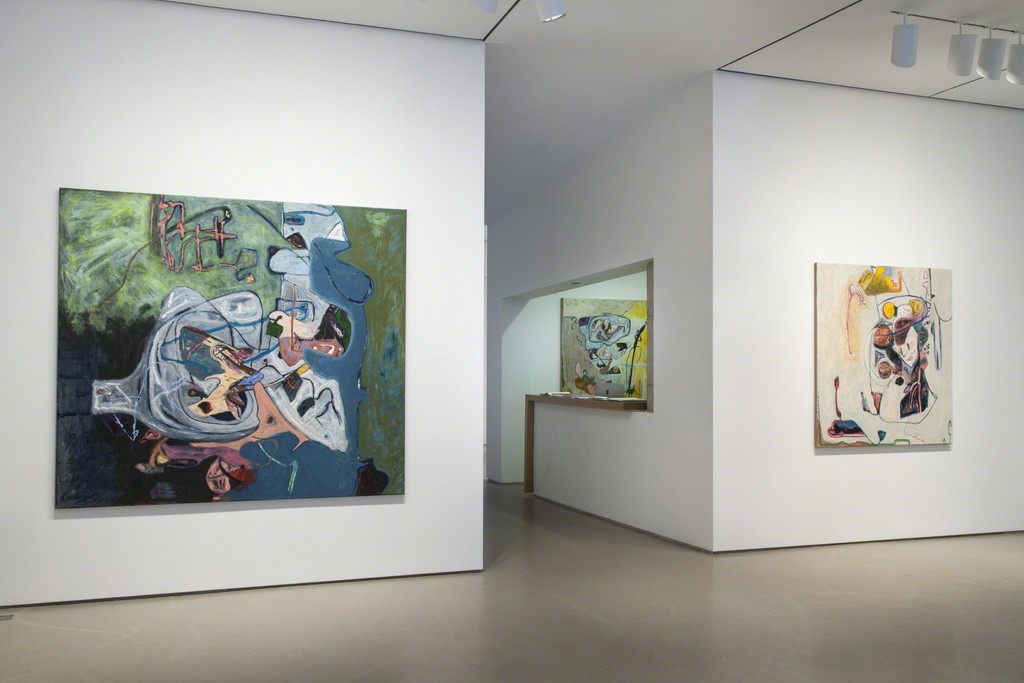 Jane Lombard Gallery is pleased to present, as its inaugural show, Sarah Dwyer’s first solo exhibition in New York. The title of Sarah Dwyer’s first solo exhibition in New York, ‘Sunk Under’, is taken from a poem by Seamus Heaney, entitled ‘Bogland’. The poem describes the Irish landscape of Heaney’s childhood and begins by comparing its ‘swampy’ expanse to the open prairies of the American Southwest. Heaney later described this kind of bogland as ‘...a landscape that remembered everything that had happened in and to it.’ Similarly, Dwyer’s paintings harness the kinetic energy expended in their making, retaining a visual tension whereby the pictorial narrative is in constant flux.
In her quest to unearth her image Dwyer undergoes a process similar to that of digging; dragging colours and forms to the surface, as if the paint itself were the turf and peat of Heaney’s poems. One of the nine paintings that make up this exhibition is entitled ‘Butter, Sunk Under’ (2015). This title refers to ‘bog butter’, a form of food preserved for thousands of years in peat bogs. This sense of preserving something that carries its own history across thousands of years, then retrieving it, like lost treasure, is the stuff of Dwyer’s paintings.
For Dwyer there is an intimate relationship between the act of painting, the unconscious drive and pure intuition. Elements of this are redolent of the tenets of Surrealism, although a total submission to the unconscious urge does not dictate her process. Rather the fast paced and energetic manner in which many of the paintings are resolved reveals traces of the unconscious. Like the memory of a dream, the paintings exist on the outskirts of conscious understanding, occupying a space somewhere between physical reality and the subconscious.
Dwyer’s process of conceiving an image is rooted in the line, always retaining the impulsive nature of drawing. A scratched mark might suggest the contours of a landscape, a stream carved out of a hillside, a figure or a portrait. The European history of landscape painting, stretching back to the Romanticism of Caspar David Friedrich, and onwards to the more localized landscape painters of the British St Ives group of artists from the 20th century, provide a lineage for Dwyer, as well as a shared visual vocabulary and palette. But the form that finds its way through, whether resembling a figure or a rocky shore, always settles back into an unresolved entanglement that can neither be read as a narrative nor accepted as pure abstraction.
The surfaces of Dwyer’s paintings often appear densely worked; the result of repeated application and erasure, where the brush moves between areas of impasto, chalky white washes of paint and sketched lines that seem to reveal an amorphous shape, or corral a cluster of forms. This method of revealing and concealing holds the surface of the work in constant tension. Dwyer’s is a remembered landscape, one mined from her personal history, from her subconscious, and not the romantic setting for the ‘figure in the landscape’. Citing many different literary sources, poetry, folkloric traditions and mythology, the written word is the key to tracing the path etched out in Dwyer’s paintings. The starting point for each work is often deeply personal, the response to her own lived experience and losses she has suffered. Words such as Psycho pomp (from Greek mythology, referring to creatures charged with guiding the dead into the afterworld without judging them), trigger narratives which the artist explores and sometimes later, once the painting is complete, return to settle as titles for the works.
Although there is no preceding visual strategy, there is an individual vocabulary of forms and tones that unifies Dwyer’s paintings, where particular shapes and drawn lines recur in different works. This unity is upheld by the palette that Dwyer employs. A soft luminosity that seeps out from the paintings’ ground,irrespective of whether the surface is dominated by a melancholic dark sea blue or a fleshy-pink, recalling the very physical paintings of Willem de Kooning and Arshile Gorky. Together, the lexicon of marks and the tonal range across the group of works allow them to cohere and suggest a wider narrative underpinning the series. This is deliberately followed through in the installation of the paintings, which are staged in dialogue with one another.
The act of painting is a cathartic one for Dwyer. These works, sometimes very fast paced in their making, are suggestive of personal and shared histories, drawing on myth, religion and psychoanalysis, in order to grasp the real within the imaginary.
Sarah Dwyer (b. 1974, Ireland) earned a Master’s in Painting from the Royal College of Art, London, in 2004 after an MFA from Straffordshire University in 2001. Solo exhibitions include Josh Lilley Gallery, London; Kevin Kavanagh Gallery, Dublin; Kybidou Gallery, Tokyo. Dwyer lives and works in London. Recent group shows include New Order: British Art Today, Saatchi Gallery, London and Fade Away (Touring exhibition), Transition Gallery, London.