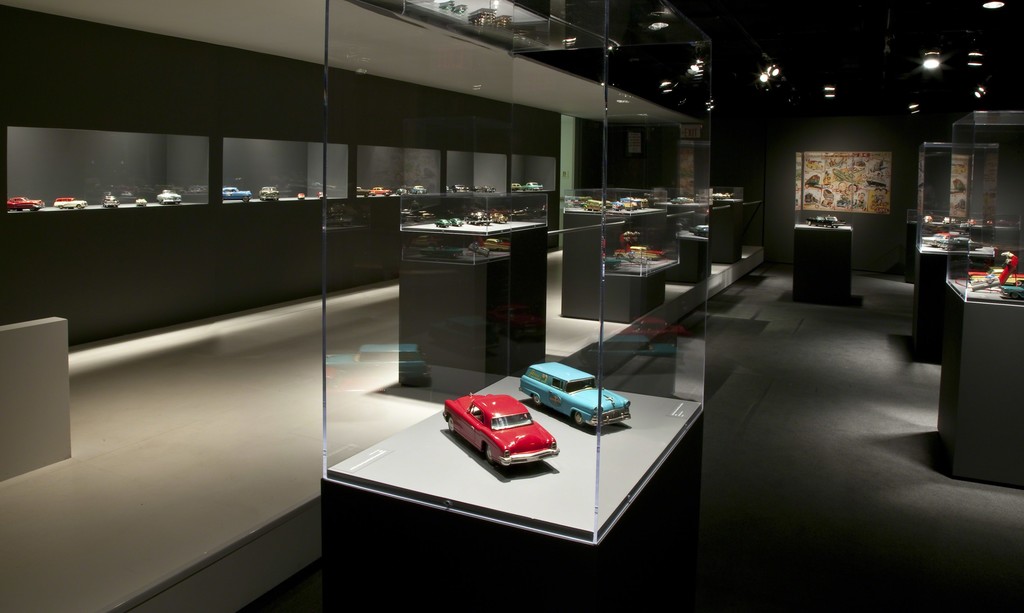 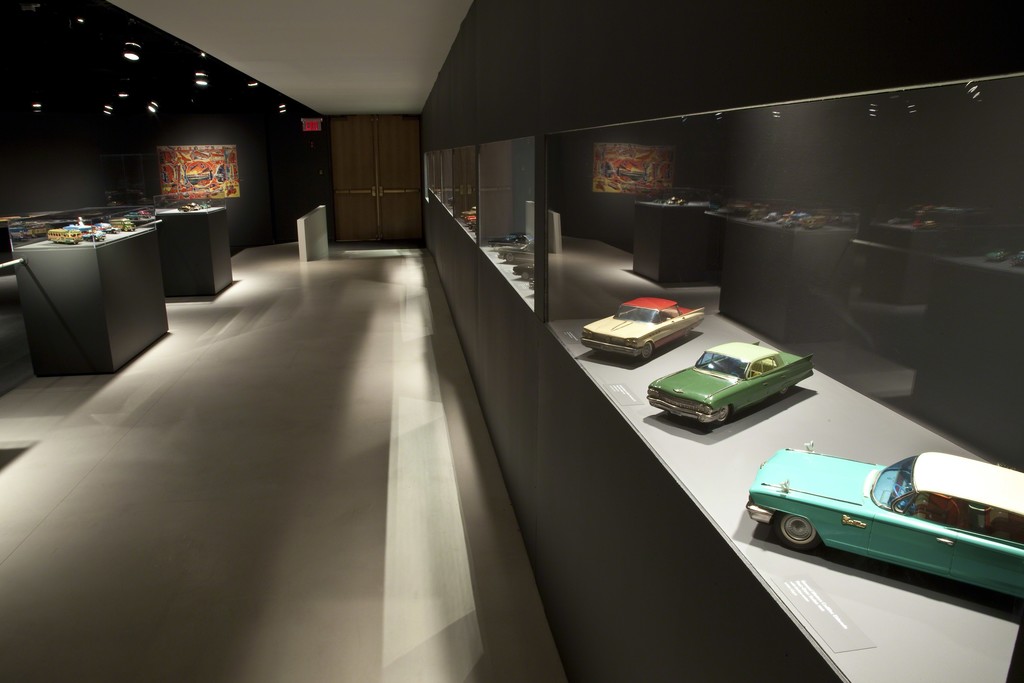 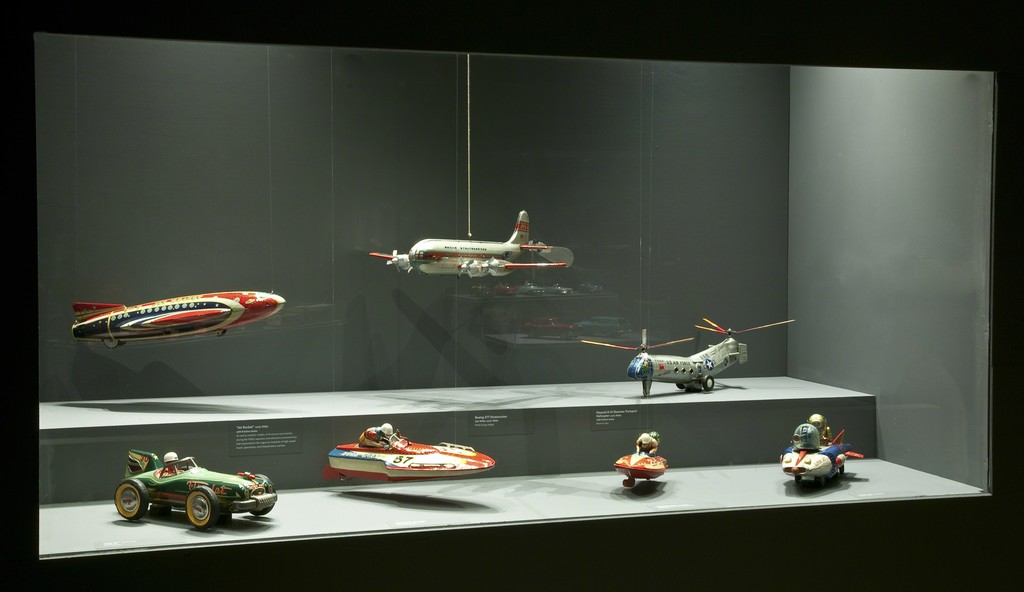 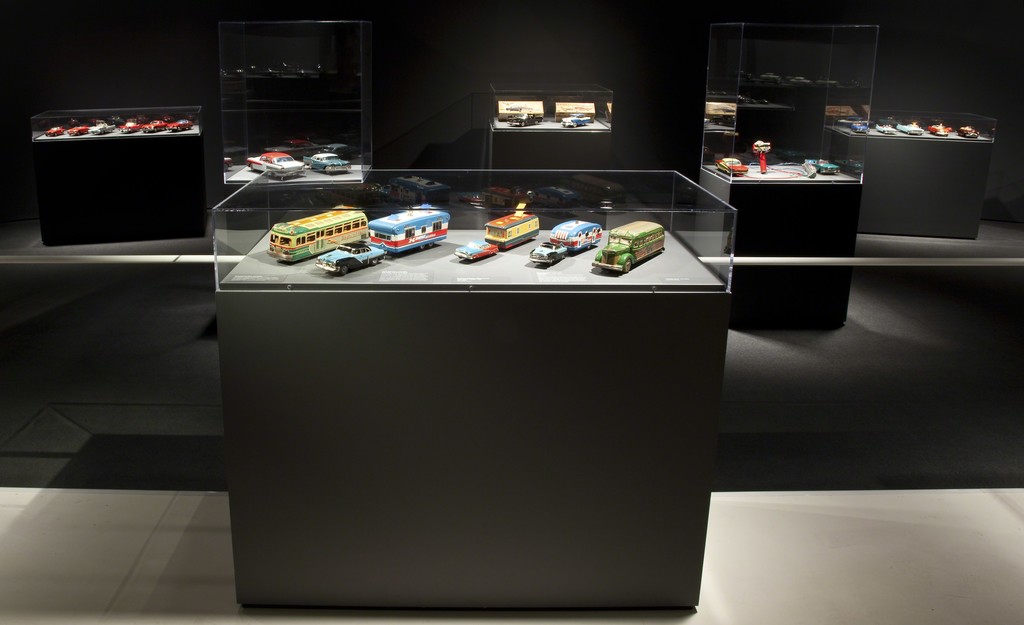 New York -- A Japanese toy designer took a discarded tin can in 1945 and hammered it into the shape of a U.S. Army jeep. Just inches in length, crudely painted by hand, and powered by nothing more than an elastic band, Matsuzō Kosuge’s jeep spawned a huge automotive industry--in miniature.

From July 9 to August 16, 2009, Japan Society Gallery trains a spotlight on tin-toy vehicles manufactured in Japan in the decades following World War II. “Replicating the automotive styling of Detroit’s ‘golden age’ down to the tiniest fin, these pint-sized vehicles helped repurpose Japan’s manufacturing sector from munitions to peacetime production,” says Joe Earle, Director, Japan Society Gallery. “They also salved a pent-up thirst for glamour and beauty in the then impoverished country, as well as in the newly affluent United States.”

This akogare (yearning) is tellingly captured in Buriki: Japanese Tin Toys from the Golden Age of the American Automobile, The Yoku Tanaka Collection by pristine tin-toy vehicles drawn from the previously unknown collection of Yoku Tanaka, a Tokyo-based businessman who first began collecting Japanese manufactured toy models as a teenager in 1961.

The 70 tin-toy vehicles on view range from small, rudimentary examples made in the fledgling phase of Japan’s postwar toy industry--beginning with a bottle-green Cadillac sedan stamped “Made in Occupied Japan”--to later, elaborate models made for the high-end American market. The latter often sport a combination of battery-powered lights, electric (as opposed to friction or clockwork) motors, remote controls, chrome trim, and retractable parts.

Not all of the featured automotive models are sedans: convertibles, station wagons, delivery wagons, buses, trailers, and racing cars are included, as are the “show” cars that so captured the imagination of the American public in the 1950s and 1960s. Among the “concept” or “show” cars on view are a 10-inch-long Pontiac Club de Mer, modeled after a prototype inspired by contemporary aircraft construction; the Firebird II Turbine car, designed by GM’s chief designer Harley Earl in 1956; and the 1955 Ford Lincoln Futura, which never made it into production, but achieved immortality as the model for the Batmobile in the Batman television series of the 1960s. As well, a handful of jets, helicopters, and speedboats are featured to help provide a sense of the variety of products created by the tin-toy industry in Japan during these years.

Many of the featured tin toys retain their original packaging, including one 1959 Ford Fairlane 500 Skyliner convertible whose cardboard box, on view in the exhibition, touts, “amazing pushbutton automatic top-forward-reverse and steering.” Also on view is a blowup of a 1951 board game depicting Japanese children riding every type of American conveyance, including a Jeep and a Cadillac sedan and boxes depicting prosperous families, blessed with ample leisure time, speeding through America’s “great outdoors.”

Early manufacturers of buriki (derived from “blik,” Dutch for “tin toy”) often had to rely on photographs to style their models, for few American cars and automotive reference materials could be found in Japan in the post-war years. Says Joe Earle, Director, Japan Society Gallery: “In those early years, more than half of the metal toys made in Japan went overseas--helping to pay for vital imports such as rice as well as meeting a severe shortage of toys in the U.S.”

One of the first manufacturers to repurpose to toymaking was Murasan Shōten, which emerged as an industry leader and innovator. Murasan was the first company to lithographically print seat fabric onto pressed tin to create more life-like models. Visitors to the exhibition can view its charming Chevrolet Bel Air sedan of 1954, where a minutely scaled red, yellow, and blue striped upholstery pattern can be glimpsed inside a two-toned chassis of bright yellow and red.

A 15½ inch-long 1962 Chrysler Imperial, manufactured by Asahi Toy Co., is another highlight of the exhibition. Modeled after the luxury model that Chrysler hailed as “The Finest Car America Has Yet Produced,” the swank black four-door sedan has a wraparound windshield, white wall tires, a chrome grill guard and chrome stripes, side mirrors, and rocket-style tail lights. A period dashboard, steering wheel, and leather-like upholstery make up the interior. The signature golden script reading “Imperial” appears on the side door. (Today, the ’62 Chrysler Imperial is one of the “Holy Grails” of Japanese tin-toy cars collecting.)

A foot-long Greyhound Bus, from the mid 1950s, with faces of blonde schoolchildren painted on tin tabs in the windows, is among the unusual road vehicles on view, along with a camping trailer attached to a 1955 Oldsmobile. Printed in bright primary colors, the latter is a scene of nuclear family domestic bliss, fifties style: Dad at the steering wheel, Mom at his side, and kids in the back seat.

The buriki industry was not immune to the rising cultural importance of manga and anime. The exhibition features a 1962 Cadillac Eldorado Biarritz convertible issued in the early 1960s with a miniature figure of Maguma Taishi--known as Ambassador Magma, the hero of Osamu Tezuka’s popular manga story of the same name--in the driver’s seat.

Buriki: Japanese Tin Toys from the Golden Age of the American Automobile, The Yoku Tanaka Collection takes the story of Japanese tin-toy cars to the mid-1960s. In five to ten year’s time, nearly all of the more than a dozen toy companies in the industry had gone out of business, overwhelmed by competition from plastic. “Despite its inevitable victory on grounds of cost and safety, plastic could never approach the sense of the ‘real thing’ that is conveyed by the large, beautifully crafted tin-plate masterpieces,” concludes Earle.