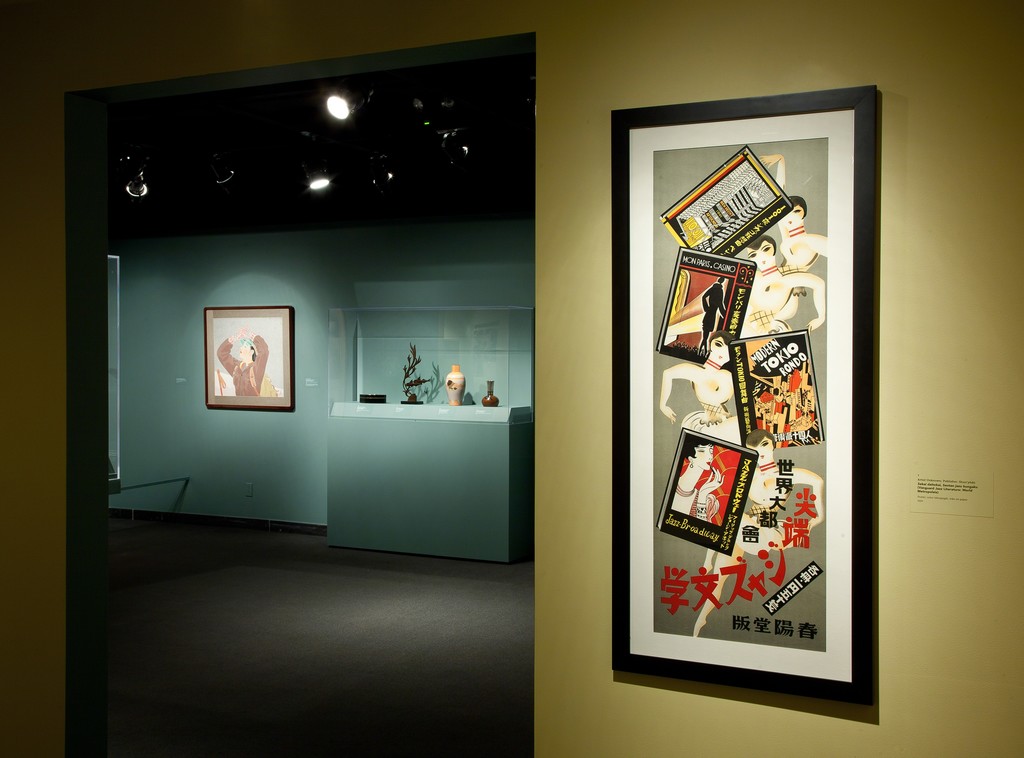 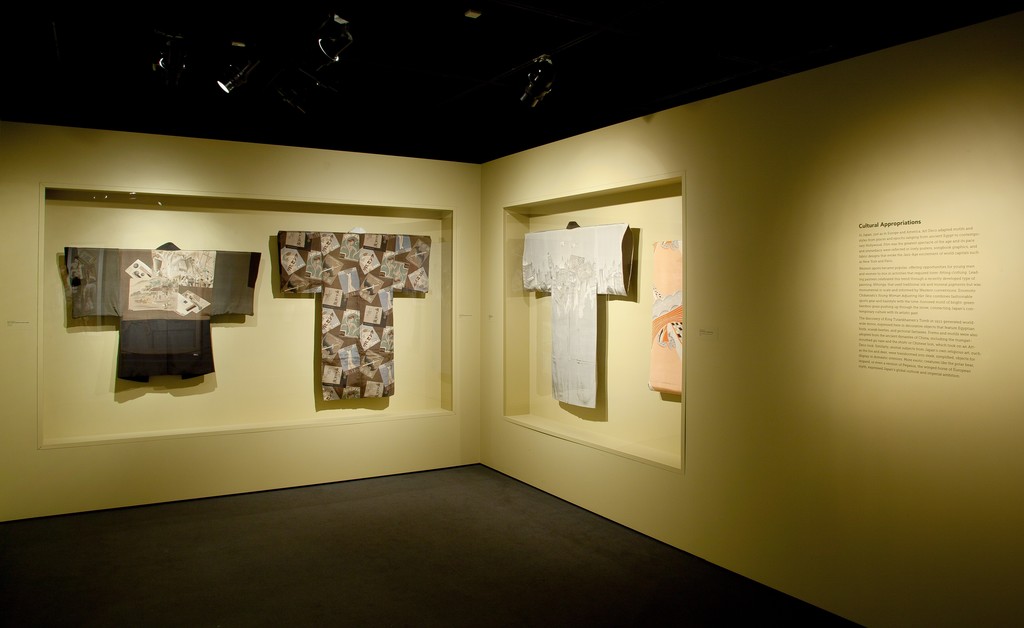 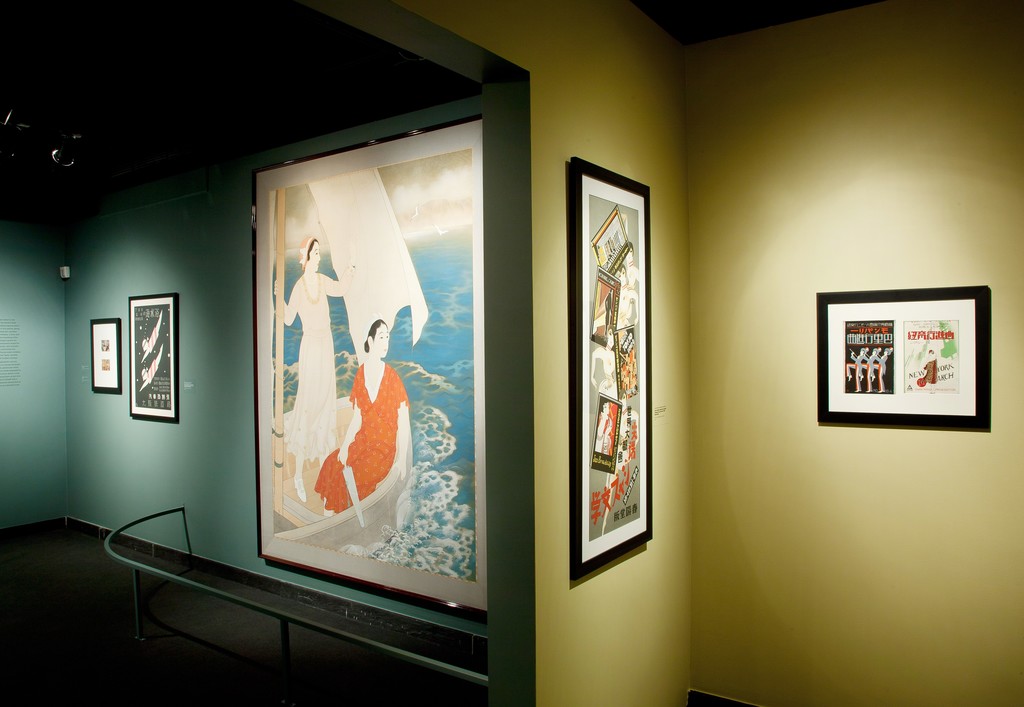 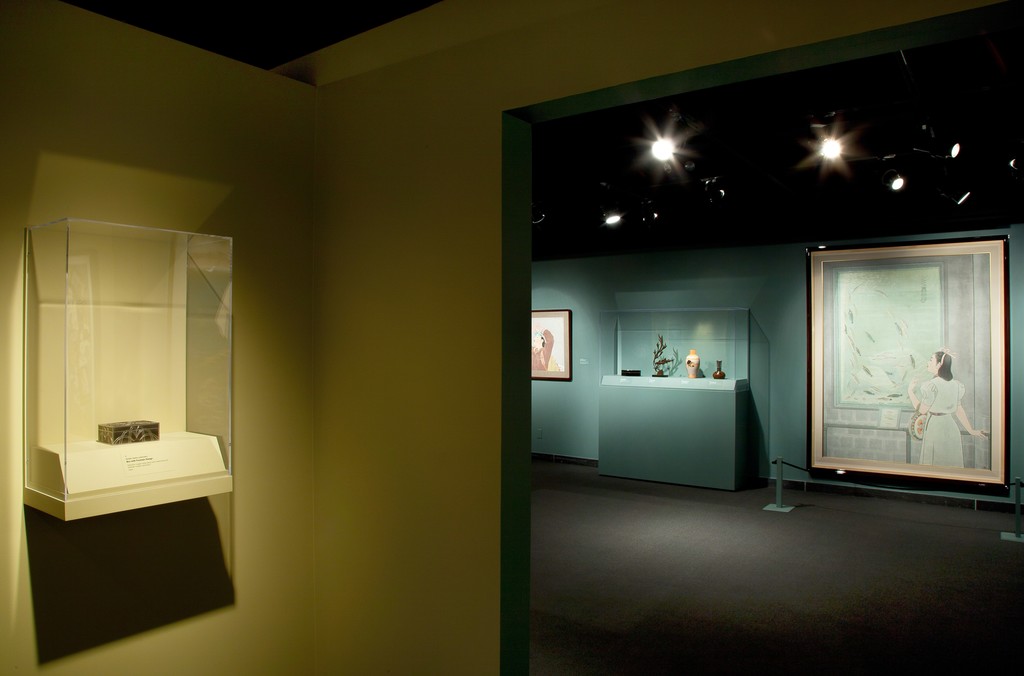 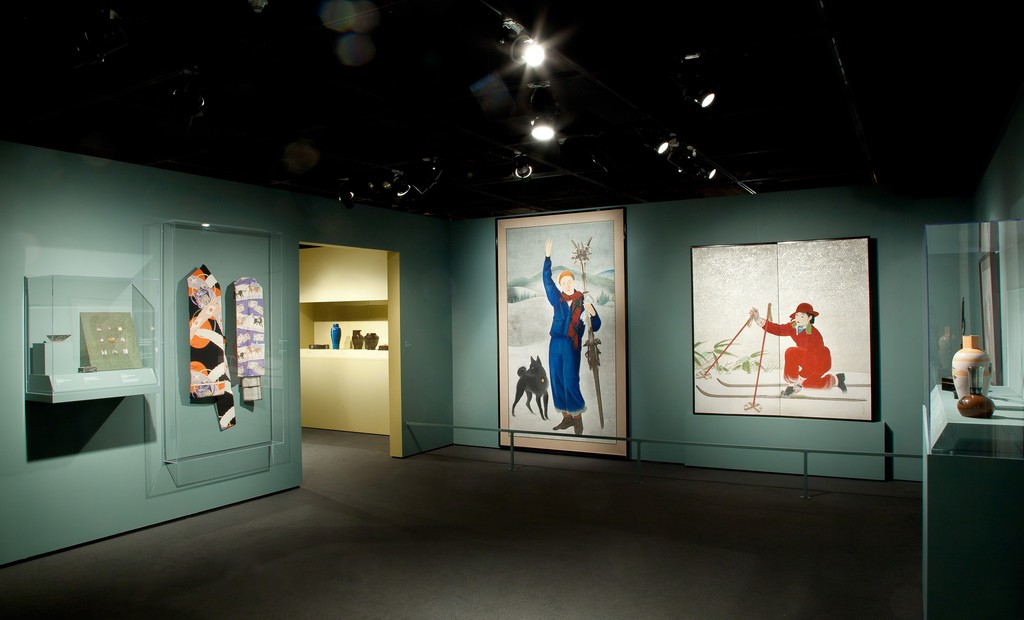 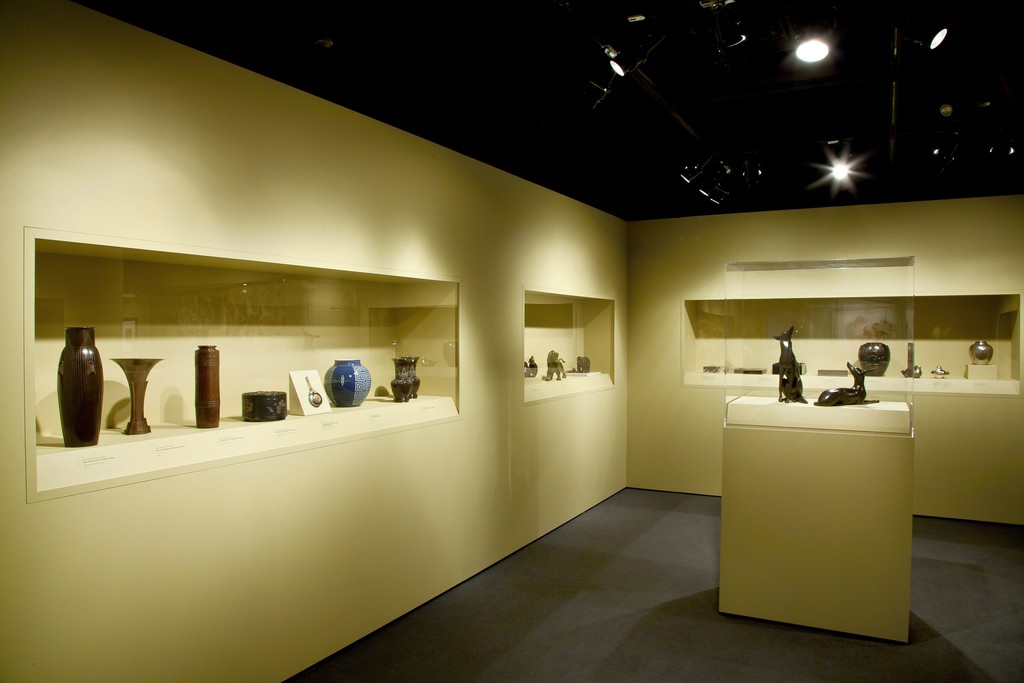 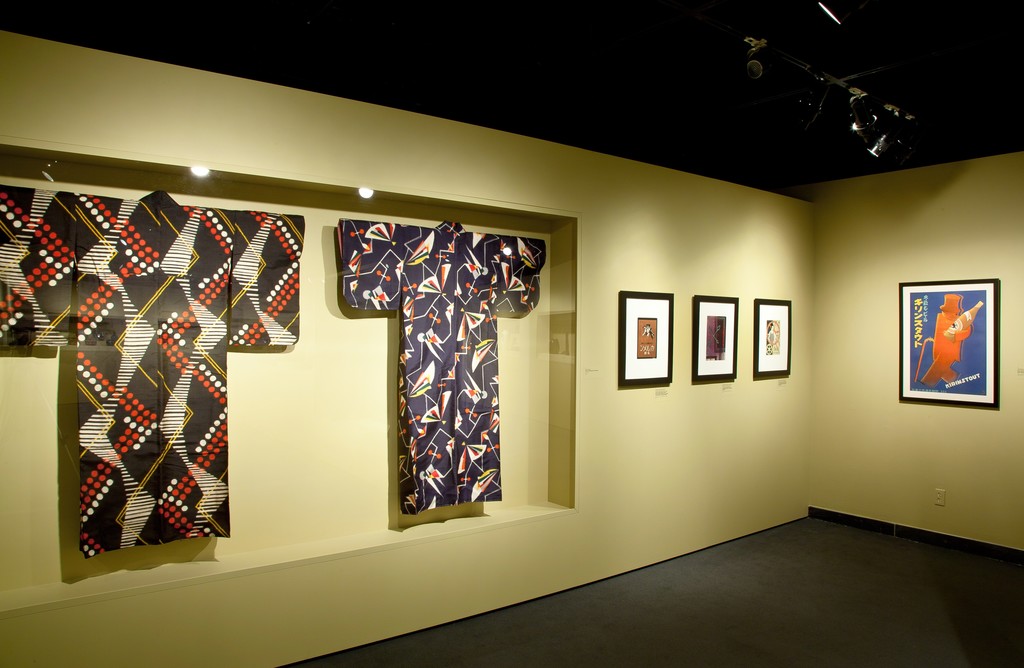 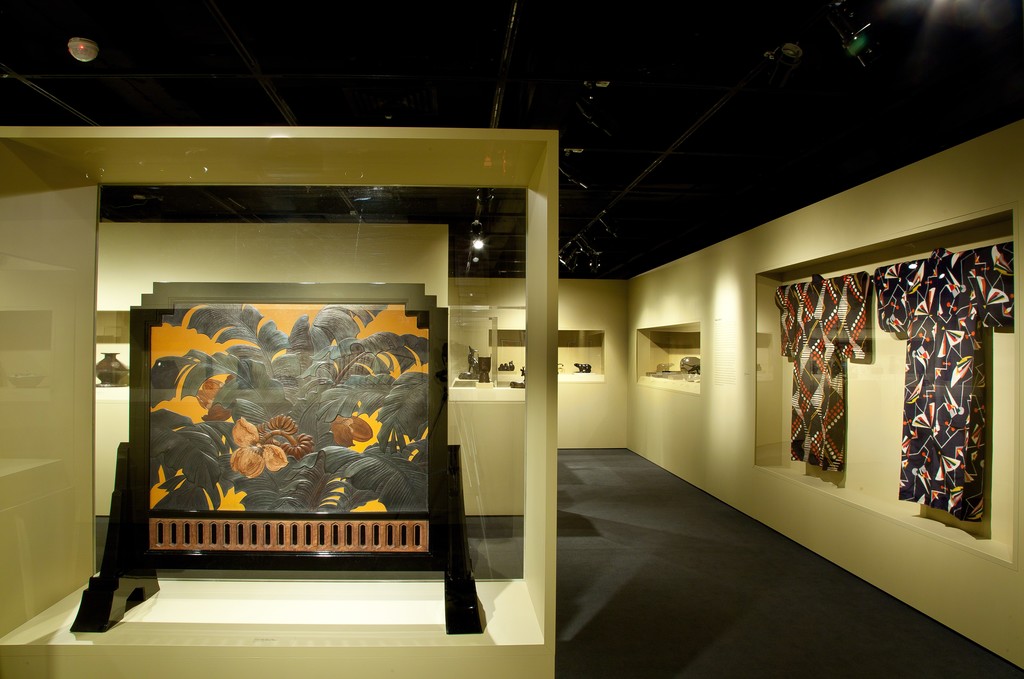 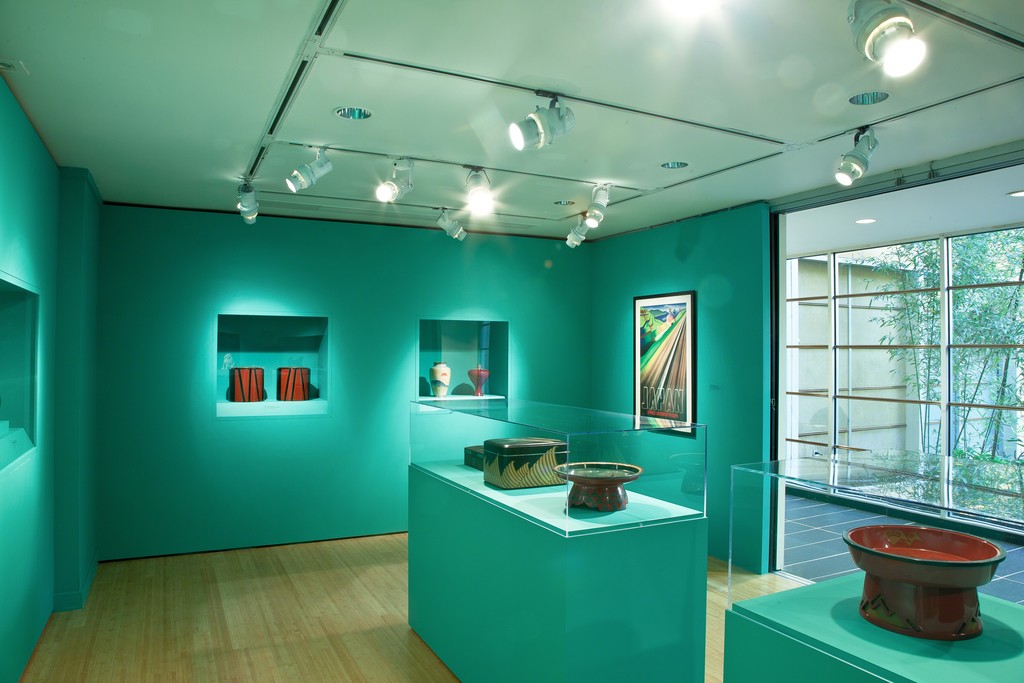 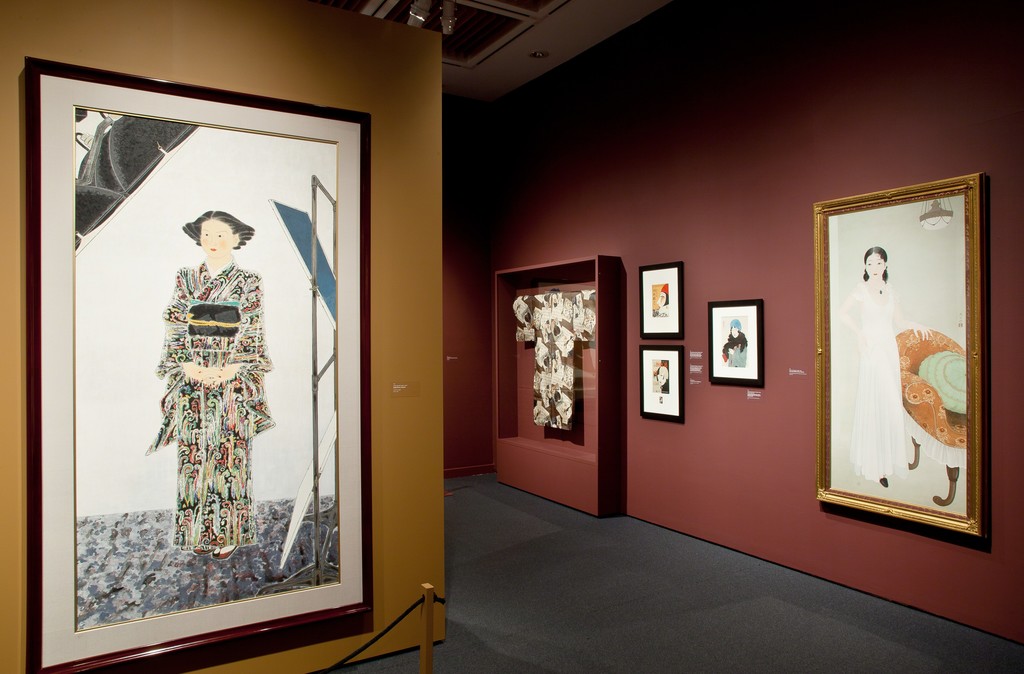 New York, NY— A thoroughly Japanese expression of the first truly global design style—Art Deco—came into being in the 20s and 30s, when the luxe and the low, the old and the new, and the East and the West were shaken and stirred into a unique cultural cocktail.

The Gallery at Japan Society considers this phenomenon from March 16 to June 10, 2012 in Deco Japan: Shaping Art and Culture, 1920–1945. The exhibition assembles fine examples of the sophisticated craftsmanship and design one associates with Japan—in ceramics, lacquerware, glass, metalwork, jewelry, textiles, sculpture, painting, and lithography—contextualized by colorful ephemera and goods mass-produced for the modern home. Some 200 works are drawn from the Levenson Collection, the world’s finest private holding of Japanese art and design from the Art Deco period.

All bangs, bob, and bright red lips, the modern girl, or moga, is undoubtedly the star of the show. As the primary subject as well as the primary consumer of Art Deco design in Japan, the moga appears on a vast majority of the works featured in Deco Japan. “Beginning in the early 20th century, Japanese women began to enter the work world in force, as typists, shop assistants, office clerks, and the like,” says guest curator Kendall H. Brown, Professor of Japanese Art History at California State University. “Their desire to display their newfound freedom helped to fuel the vitality of the era and spawn new floating worlds in the fashionable districts of Tokyo. “

After its showing in New York, Deco Japan travels to The John and Mable Ringling Museum of Art, Sarasota, Florida (July 2012); The Albuquerque Museum of Art and History (February 2013) ; The Society of the Four Arts, Palm Beach, Florida (November 2013); and other venues to be announced. The exhibition and its tour are organized by Art Services International, a nonprofit traveling exhibition organization in Alexandria, Virginia.

“In the late 20s and 30s, Tokyo was rebuilding and modernizing in the wake of the 1923 earthquake,” notes Joe Earle, Director of Japan Society Gallery, who collaborated with Dr. Brown to organize the showing. “There was a pent-up desire, after years of hardship, to make, consume, and shake off tradition in favor of the new, modern way of living.”

This thirst for the new, in tandem with other complex social forces, is examined in Deco Japan. “Rather than grouping by medium, we have juxtaposed different kinds of objects in order to shed light on the appropriations, formal strategies, and social context of Art Deco in Japan,” says Dr. Brown.

Near the beginning of the exhibition, the visitor encounters a man’s kimono with a skyscraper motif and a delicately lacquered silver and gold box with a leaping Pegasus on its lid: just two examples of how Japanese artists of the period gave vitality to a variety of popular manias, whether it be for skyscrapers and Classicism or Egyptian art, Chinese antiquity, and horse racing.

The intricate diamond shapes of a cloisonné vase, the dots and swirls animating a glass bowl, and the hint of a metal mechanical spring in the autumnal cattails of a bronze tea ceremony screen: these and other visual riffs suggest what enormous pleasure the artists of the period must have derived from their new and inventive manipulations of form and pattern.

The Museum of Fine Arts, Boston is lending five spectacular paintings for the exhibition at Japan Society. Originally displayed in the fashionable Gajoen hotel and wedding hall, one of the notable consumer sites in 1930s Tokyo, the panels depict the fashionably attired modern girl—skiing, sailing, celebrating Christmas, and visiting a tearoom. Here, rich hues and sinuous lines applied with mineral pigments and ink illustrate how naturally the precision of traditional Japanese painting lent itself to art deco streamlining.

The taste for the exotic is evident in many of the 20 sculptures (okimono) on view in the exhibition. Here, exotic and mythological beasts like lions, bulls, unicorns, and dragons are realized in a variety of ways, from a mass-produced powder blue ceramic bear to a pair of masterful silver and gold figures of paper cranes no larger than the palm of the hand.

In sharp distinction to the café culture values illustrated in one of the most expressive works in the exhibition—a color woodblock of the modern girl with a cocktail in a café—a good number of the featured works convey a militant nationalism. A phoenix on the lid of a round container, a ferocious dragon cast in bronze, and a heron snatching a fish in its beak atop a lacquered box: these subjects would have been clearly understood as symbols of imperial prestige and the will to power that characterized the years preceding and during World War II.

Deco Japan’s last room features with examples of luxury commodities and mass-produced goods conceived for the modern “culture house.” A pair of lacquered vases with leaping hares created in 1942, a cubist-like sake flask in the shape of an Akita dog from the 1930s, a decorative cabinet, carpets and an extraordinary bronze table clock with a rabbit pounding rice-cake on the moon, which reimagines a medieval Japanese tale, bringing the show to a close with a perfect pairing of tradition and modernity.