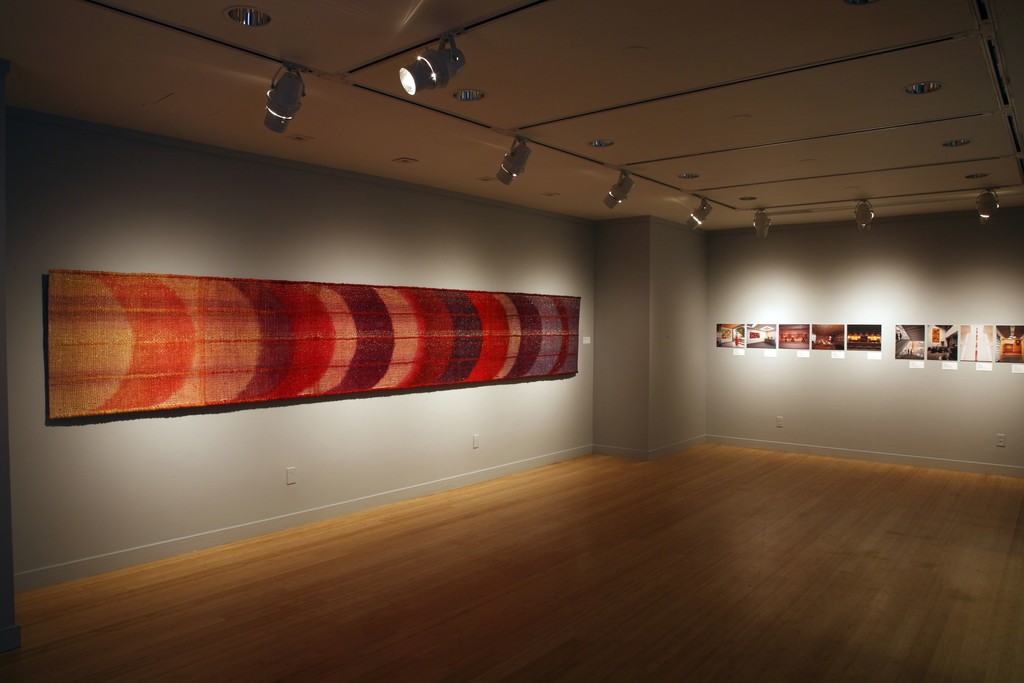 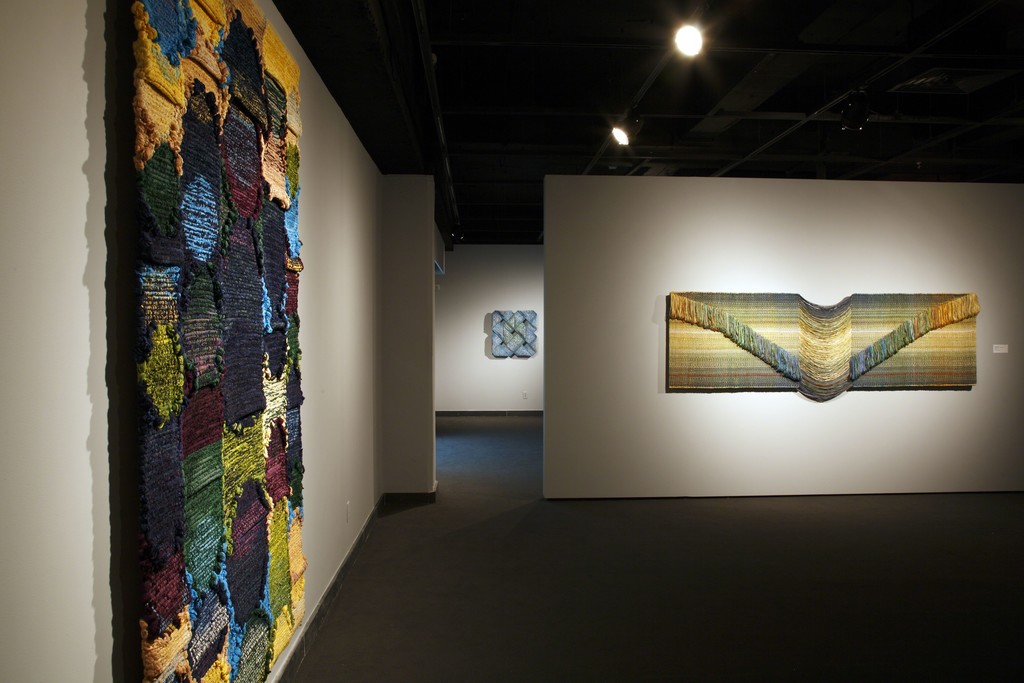 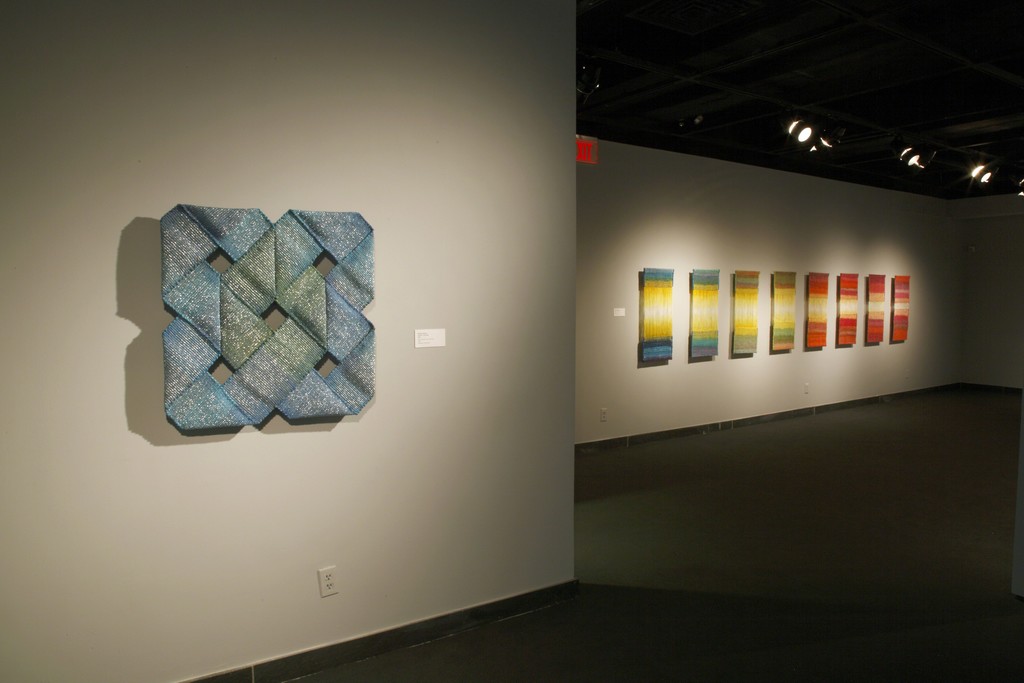 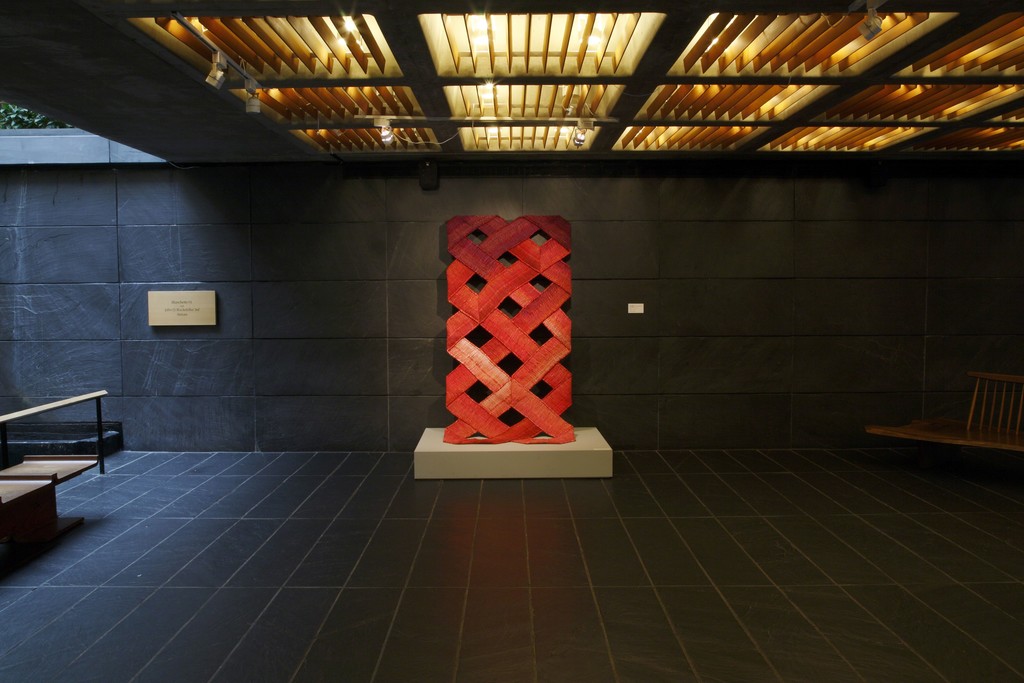 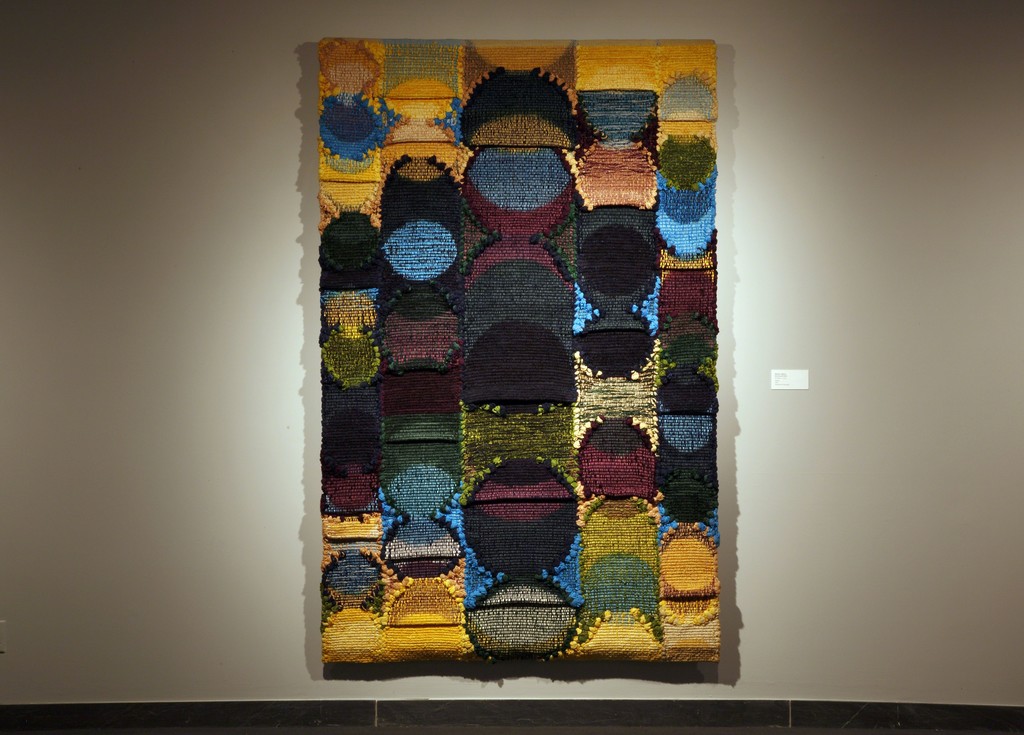 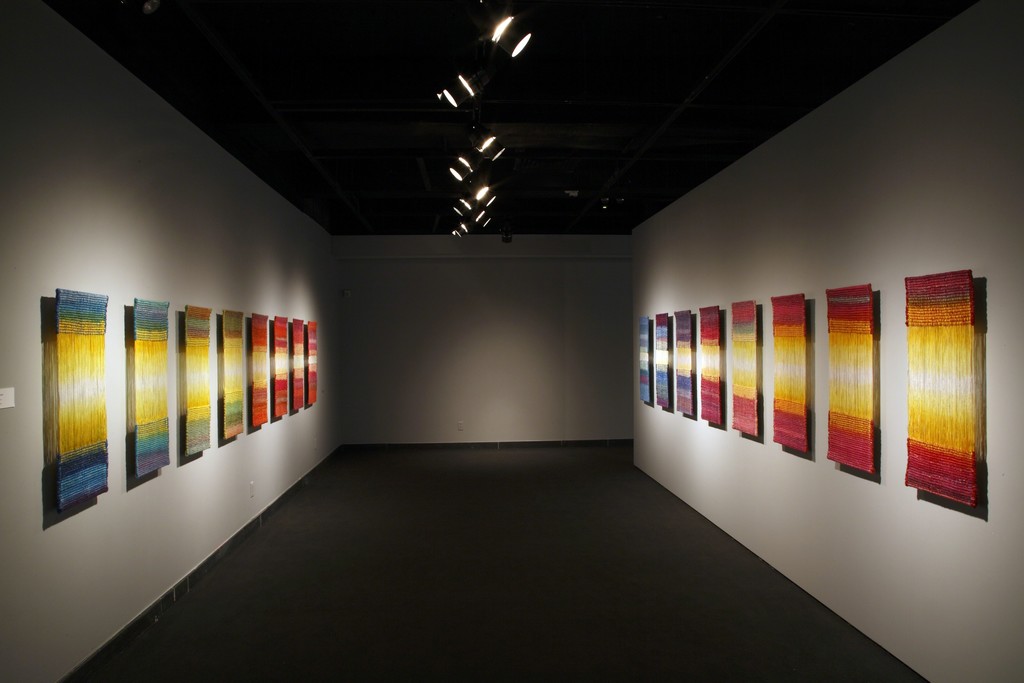 Tapestry in Architecture: Creating Human Spaces features works specifically commissioned by clients including Hie Shrine for its new building in downtown Tokyo, Pfizer Global Research and Development for its laboratories in Nagoya, Resona Bank in Osaka and more. Because the works are integral components of these buildings, rather than remove them for the exhibition, Asakura has painstakingly created exact copies to travel in the exhibition. The dramatic enhancement of these architectural spaces, ranging from a cutting-edge pharmaceutical laboratory in Nagoya, Japan to a shrine in Tokyo, Japan, with site specific tapestries is documented in the exhibition by large-format photographs that show some of the works in situ. In addition, a four-minute video shows Asakura working in her studio creating a tapestry from selecting the dyes to weaving on her traditional Japanese loom. Marking the first time Asakura's work has been publicly exhibited in the United States, Tapestry in Architecture is accompanied by a 60-page catalog featuring an essay by Akira Tatehata, the director of the National Museum of Art in Osaka.

About Mitsuko Asakura
The daughter of an artist and dyer, Mitsuko Asakura was born and raised in Kyoto, the former capital of Japan. Growing up helping her father in his dyeing workshop and surrounded by the traditional craft artists of Kyoto, Asakura developed a passion for weaving. Deeply immersed in the traditional textile culture of Japan, she created her own original style of textile art by mixing traditional fiber dyeing with experimental shapes. Asakura’s tapestries are notable for their sensitive use of color and unusual forms. All of her dyes are handmade, often featuring a combination of natural ingredients sourced in the nature surrounding Kyoto and cutting-edge chemical substances. The interplay of the natural and man-made materials in the dye creates vibrant and subtle colors that distinguish her work. These dyes create vibrant and subtle colors that distinguish her work. Most striking is her series of works entitled Oritatamu, which she first started creating in the 1970s. Oritatamu is a play on Japanese words which translates to “weaving and/or folding.” Unlike her contemporaries who were also exploring three-dimensional textile forms that were free-standing, Asakura has always created her dimensional work to be hung on a surface like a tapestry.

In the book Listening to the Thread, published in 1994, Asakura explains her influences and approaches to her work. As a child, she was profoundly affected by the parades held during Kyoto’s annual mid-summer Gion Festival. In this month-long festival that dates back to 869 AD, European tapestries, primarily from the 16th and 17th centuries, are used to ornament huge floats pulled through the streets by teams of people. These enormous tapestries influenced her approach to dyeing and weaving. As a young artist, Asakura began an extensive study of tapestry traditions around the world, including a year working and studying in the Netherlands. The constant interplay of these different traditions with her own is a hallmark of her work. She sees the structure of weaving as comparable to that of pointillism in painting, pointing out that colors never really mix together in textiles but keep their distinct colors. Combined with the effect of intercrossing warp and weft that create slight shadows at the point of intersection, the tapestry conveys a “visual symphonic wholeness” that “echoes in the distance.” Her work, like the Gion Festival floats, is best appreciated when viewed from a proper distance.

Along with her many commissions, Asakura’s work has been featured in numerous exhibitions both solo and group, primarily in Japan.