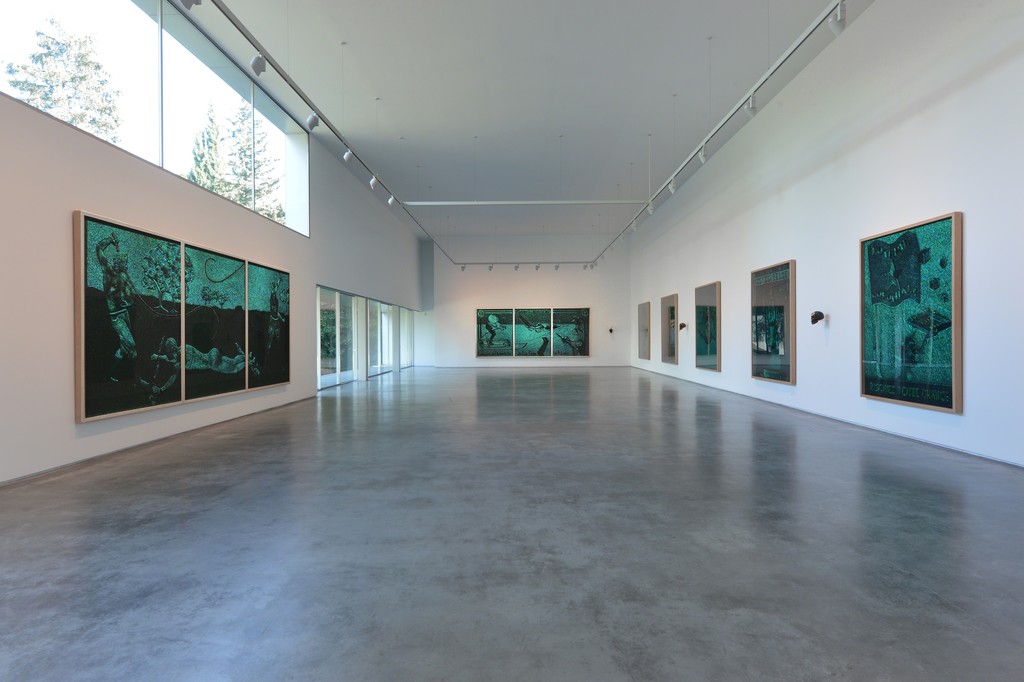 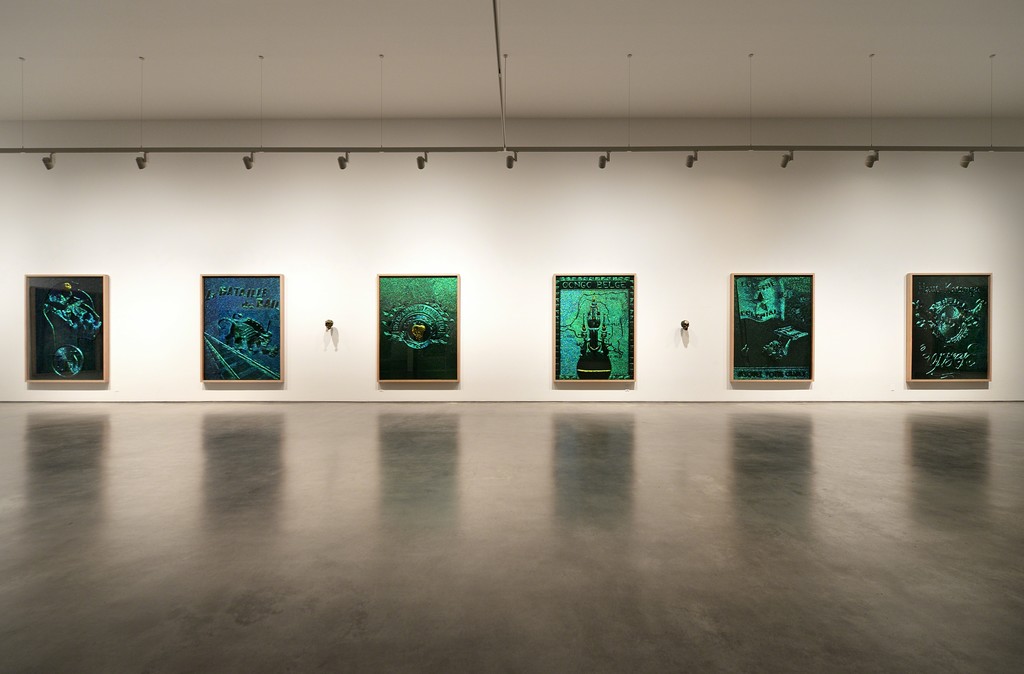 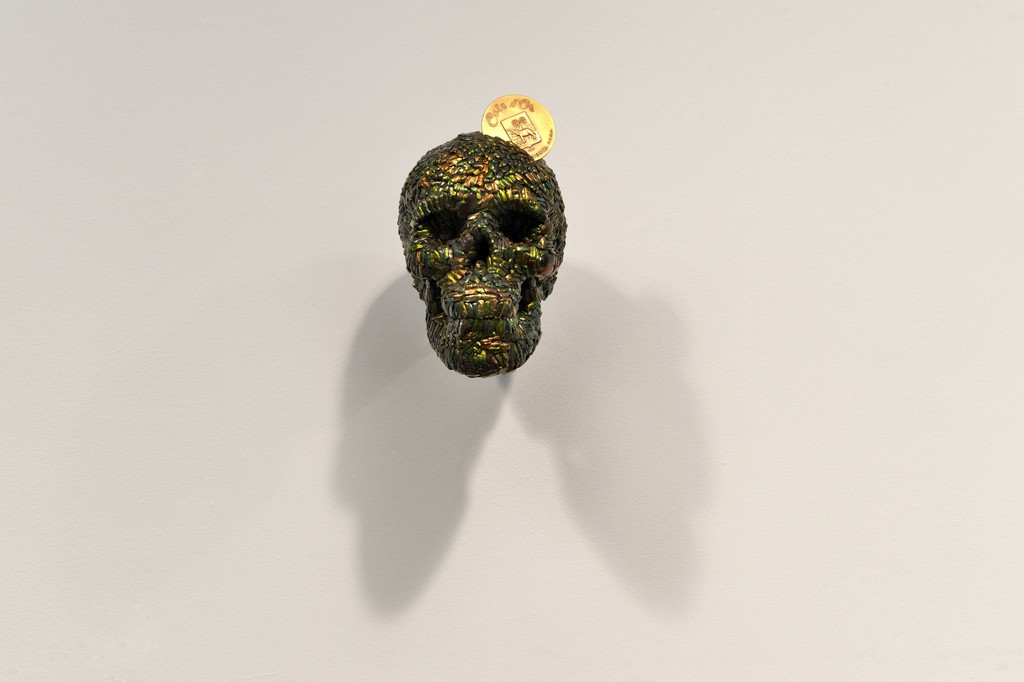 Jan Fabre (b. Antwerp, 1958) is presenting his first solo exhibition at the Galería Javier López & Fer Francés and, for the occasion, he has selected fifteen of the impressive mosaics that belong to the two series Tributo al Congo Belga (Tribute to Belgian Congo) and Tributo al Bosco en Congo (Tribute to Hieronymus Bosch in Congo). The works are imposing on account of their large format, further emphasised in two cases by the arrangement of the compositions as triptychs, and their impact derives above all from the material used: the wing-cases of thousands of jewel beetles give a mesmerizing iridescent lustre. Close up, the works attract the viewer with the beauty of the brilliant surface, which shimmers in tones that range from the purest greens, the dominant colour, to varying shades of blue, with touches of golden reds and yellows, used to highlight details to great effect. From the right perspective, the viewer discerns scenes that are extremely raw in the violence and the degradation of values that they symbolise.

Fabre conceived the works as a critical reconsideration of his country’s shameful colonial past, a frontal attack on its policies in the Congo at the end of the nineteenth century under the rule of Leopold II—who is portrayed in one of the works. These two symbolic series present a visual lament over injustice, senseless violence, guilty indifference, which sadly remain all too present in our current world. The titles give an idea of the circumstances of the Belgian Congo at that period: the systematic exploitation of the country and its riches (ivory, gold and diamonds), the brutal cruelty used to enslave and tyrranise the black Africans, the greed of the white colonial officials, hungry to accumulate personal wealth. Joseph Conrad’s novella Heart of Darkness is a powerful testimony to what was taking place in the Congo around 1891, an allegory of the soul’s depths that so fascinate Fabre.

Jan Fabre admires Hieronymus Bosch’s superlative imagination and his capacity to create ambiguous images, and he has chosen Bosch’s Garden of Earthly Delights as the inspiration for this Tribute, since the hell imagined by Bosch centuries ago became horrific reality in the Belgian colony. He offers homage to the Flemish master of the uncanny by means of parallels between scenes of fantasy and terror from Bosch’s triptych, now housed in the Prado Museum, and real incidents that occured in the Congo Free State between 1885 and 1908, when the region was the private property of the Belgian monarch. He isolates and enlarges details from Bosch’s painting to make them the main subjects: naked male figures skating, nuns looking like pigs, frog-headed men, inside huge seashells or with an egg on top of them…. Fabre adapts the monstrous, surreal combinations and the elaborate methods of torture depicted by Bosch to call our attention to the beauty of the horror; once evil is rendered banal, fascination walks hand in hand with horror, attraction with fear, the sacred with the gruesome. The exhibition is rounded out with sculptural works created in the same material, the wing-cases of the scarab in darker tones covering skulls and endowing them with the aura of a religious relic or ritual object.

Jan Fabre is recognised as one of the most multi-faceted creative artists on the international scene, critically acclaimed as a visual artist, theatre artist and author. He understands the practice of art as an interdisciplinary experience that offers him a completely free choice of medium and technique to express himself, whether through drawing, sculpture, thinking models, installation, performances and performance films. His recent projects include, most notably, exhibitions at the State Hermitage Museum in St Petersburg and at the Abbazia di San Gregorio as a Collateral Event at the Venice Biennale this year. The exhibition at the gallery coincides with the launch of his “Night Diary” in Spanish, Diario nocturno, specially edited in two volumes covering 1978–1984 and 1985–1991, and it falls between two stunning theatrical productions in Spain: the premiere of Belgian Rules at the Teatro Central in Sevilla (27 October 2017) and a performance of his Mount Olympus at the Teatros del Canal in Madrid (12–13 January 2018).

Gallery hours are Monday to Friday, 10 a.m. to 5 p.m.
For further information or images, please contact the gallery.