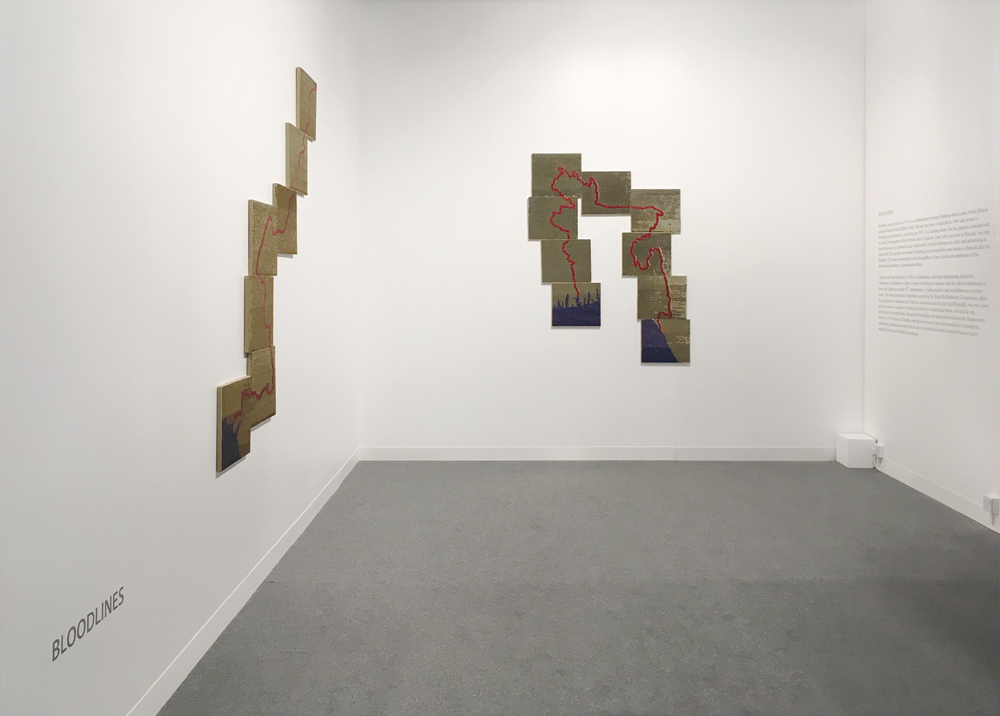 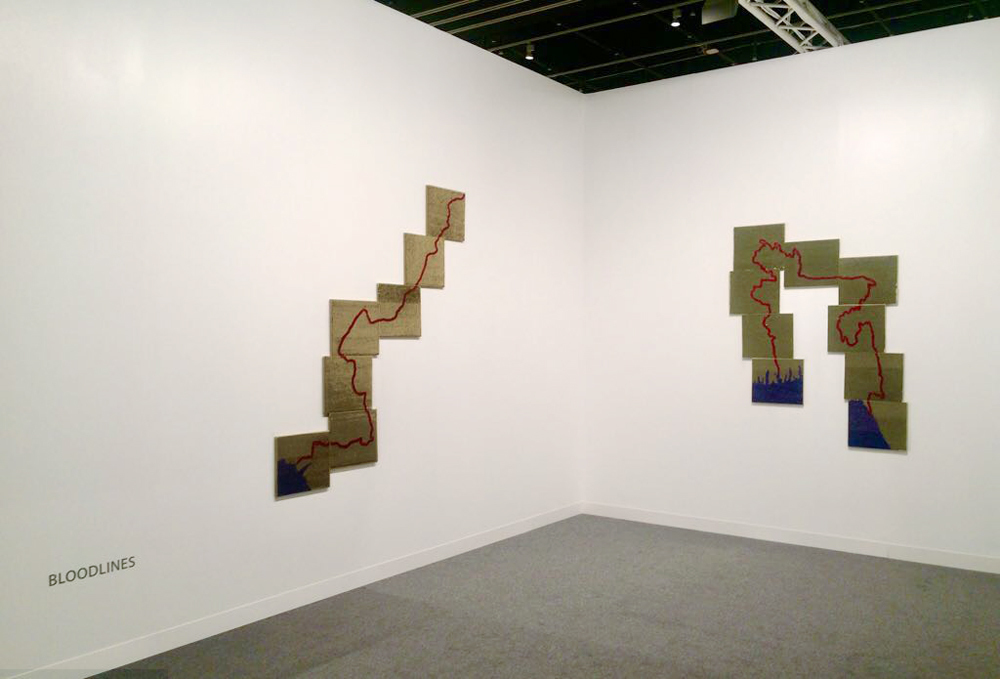 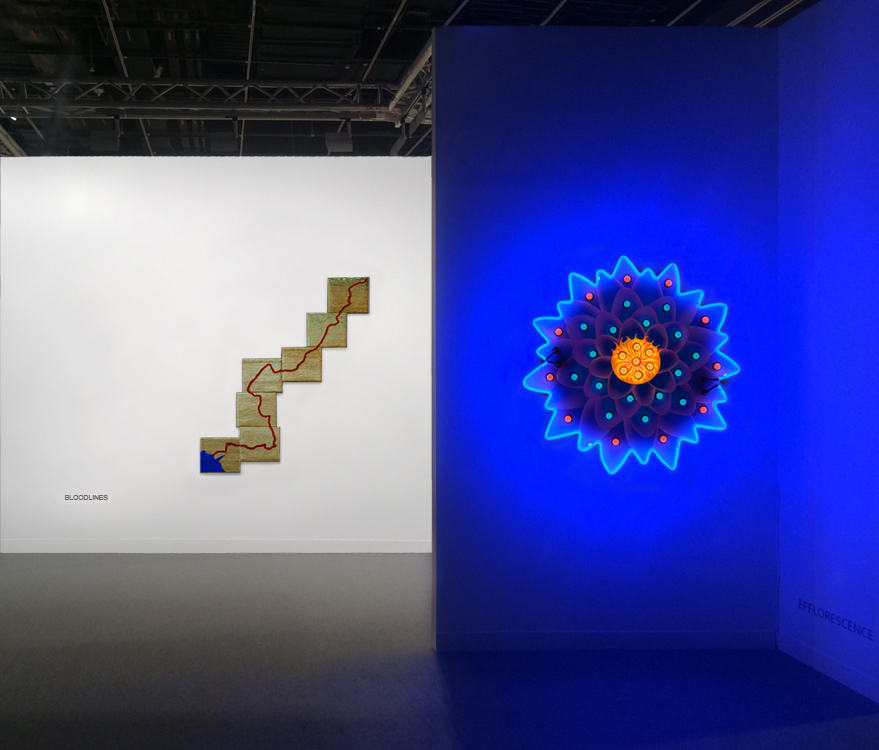 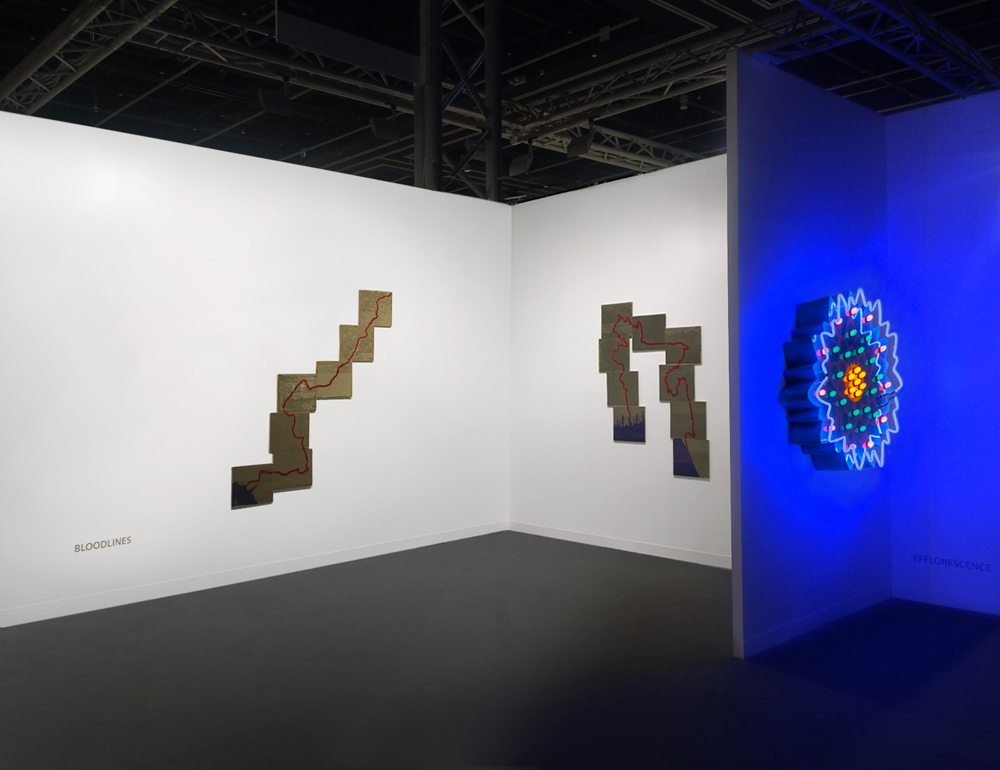 'Bloodlines' was produced in 1997 as a collaboration between Bombay-based artist Nalini Malani and the Karachi-based Iftikhar Dadi. Malani was born in Karachi in 1946 and moved to Bombay (now Mumbai) a year later, in 1947. As a leading artist, she has played a principal role in artistic investigation of the Partition and its legacies. Dadi, who was born in Karachi, has long been interested in a productive and collaborative relation between art, craft, and informality in South Asia. His parents were based in Bombay and traversed the new border to Karachi after the Partition. The crossed trajectories in the biographies of these artists are emblematic of the dislocated experiences of
innumerable others.

Malani and Dadi first met in 1996 in Copenhagen, and they subsequently decided to collaborate on 'Bloodlines' to offer a version of history at variance with the official celebrations of India and Pakistan on their 50th anniversaries of Independence and establishment as nation-states. The work remaps the borderlines created by the Radcliffe Boundary Commission, which was appointed to demarcate the Partition and was headed by Sir Cyril Radcliffe, who was given only five weeks to complete the task and had never visited India before, nor had he any knowledge of its complexities. Enormous bloodshed and dislocation followed the demarcation.

Both the 1997 version of 'Bloodlines' and the more recent ones were produced in Karachi by embroidery professionals who work in zari, the traditional metal-wrapped threads used to embellish Indian and Pakistani garments.

Widely considered the pioneer of video art in India, Nalini Malani explores drawing, painting, and the extension of those forms into projected animation, video, and film. Her works in new media often take the form of monumental and immersive shadow play pieces that create mesmerizing layers of imagery and sound. Committed to the role of the artist as social activist, Malani focuses on creating dynamic visual stories about those who have been ignored, forgotten, or marginalized by history. Drawn from history, culture, and her direct experience as a refugee of the Partition of India and the legacy of colonialism and de-colonization, Malani’s work explores violence, the feminine, and the politics of national identity. Malani’s work is represented in numerous public collections including the Asia Society Museum, New York; Centre Georges Pompidou, France; Museum of Modern Art, New York; National Gallery of Modern Art Mumbai, India; National Gallery of Modern Art New Delhi, India; British Museum, England; and Stedelijk Museum, Netherlands. In the past decade alone, solo exhibitions have been shown at museums including the Stedelijk Museum, Netherlands, the Institute of Contemporary Art Boston, Massachusetts (2016); Kiran Nader Museum of Art, India (2014); Art Gallery of New South Wales, Australia (2012); Musée Cantonal des Beaux-Arts, France (2010); and Irish Museum of Modern Art, Ireland (2007). In October 2017, the Centre Georges Pompidou, France, opened a retrospective of the artist’s work. Malani was born in 1946 in Karachi, India. She currently lives and works in India and Europe.