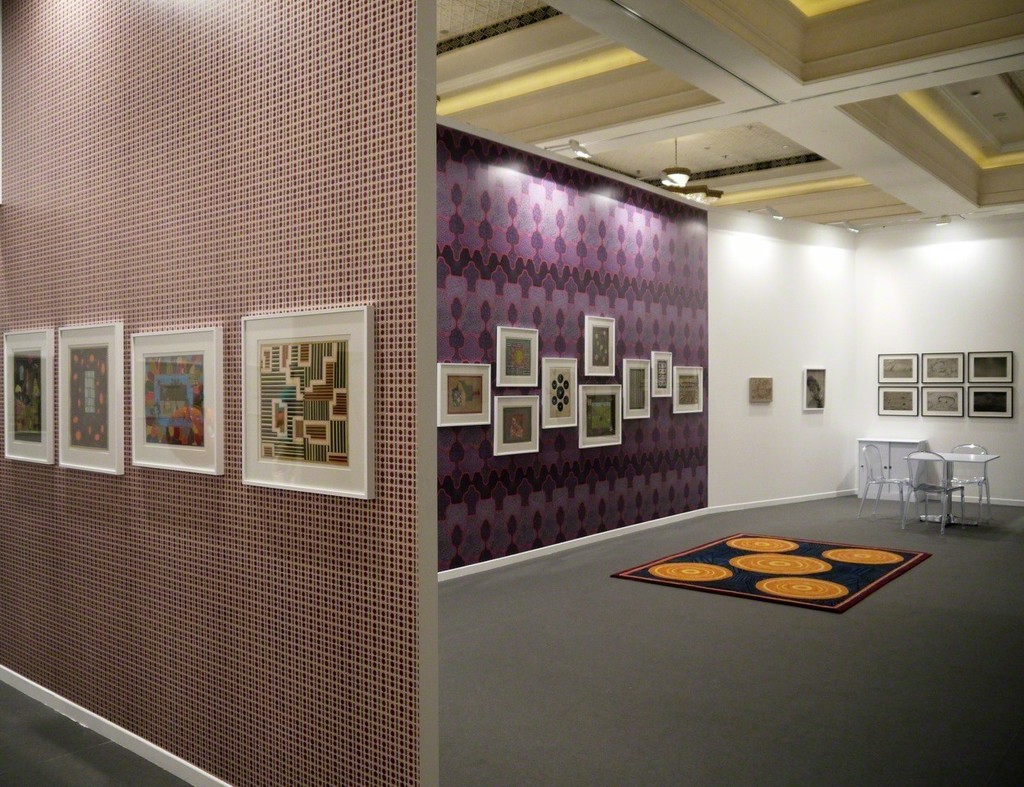 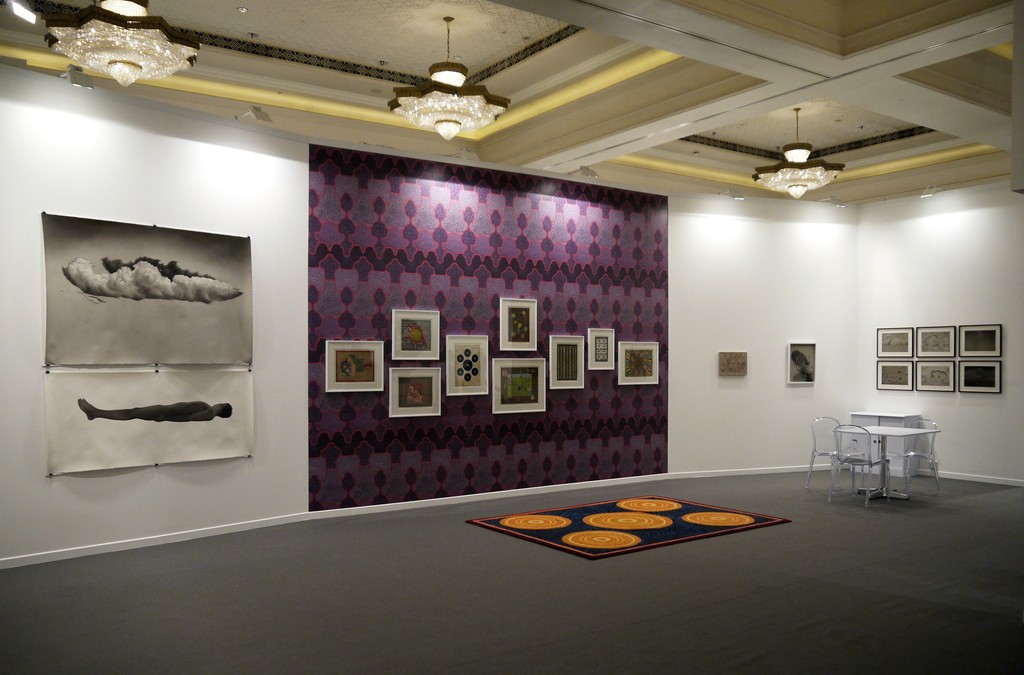 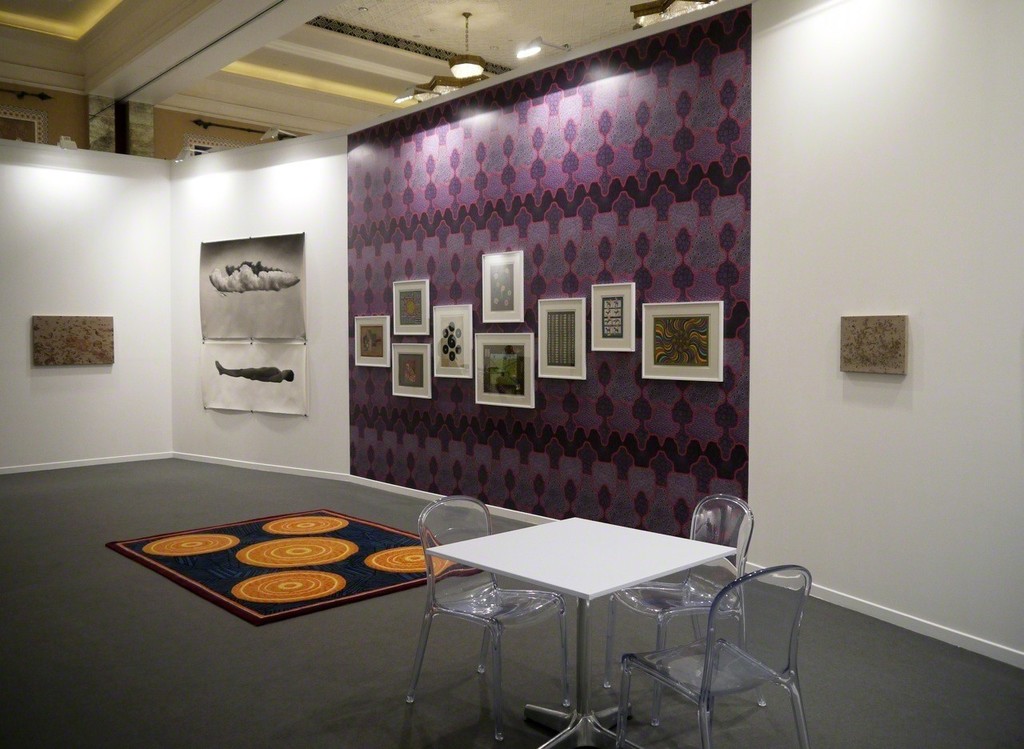 Jhaveri Contemporary’s presentation for Art Dubai foregrounds a conversation between two artists: Alexander Gorlizki (b. 1967, London) and Ali Kazim (b. 1979, Pattoki, Pakistan). The practice of both artists is rooted in the tradition of miniature painting, and each uses its techniques and iconography to create a distinctive visual language.
Alexander Gorlizki lives and works between New York and Jaipur, India, where he maintains a studio with a small group of master painters. His works on paper draw on a wide and varied range of sources, from Eastern and Western iconographies and historical references to ornamental and textile patterns and collage elements using found photographs and magazine pages. Gorlizki’s compositions move between geometric abstraction and whimsical narrative scenes, incorporating everything from Uzbek textiles, designs from 1940s American advertising, and Syrian ceramics. Forgery and ambiguity play a part too, as antique papers are often used as a backdrop to traditional representational images grounded within a flattened and contemporary visual space. An abiding interest in the crossover between fine and applied arts has led him, more recently, to extend his visual vocabulary to floors and walls, creating immersive environments layered with wallpapers, carpets and three-dimensional objects.
Ali Kazim’s extraordinary skill in rendering the human body, using the traditional techniques such as siyah qalam and pardakht, has resulted in a series of delicately sensual male portraits. Typically simple forms set against flat, clear backgrounds or fields of earth-toned colour, Kazim’s protagonists are reservoirs of mystery, absorbed in reverie, in inner places of truth and stillness. Material is metaphor for the artist, and in a new suite of drawings presented here, he uses tracing paper and black pigments to respond to the ruins of an ancient city near Lahore. Eliminating all colour and brushstroke – but with the very same acute sense of observation for which he is known – Kazim captures a landscape scattered with broken terracotta pieces, shards of pottery uncovered by the monsoon rains. “I like the idea of tracing traces of ruins on tracing sheets,” he writes, “placing these shards on a smooth translucent surface, carefully, one by one, as though performing a sacred ritual.”

Ali Kazim (b.1979, Pattoki, Pakistan) received his BFA from the National College of Arts, Lahore, in 2002 and an MFA from the Slade School of Fine Art, London, in 2011. His work has been exhibited widely in solo and group shows internationally, including: Rohtas 2, Lahore (2015, solo), Leila Heller Gallery, New York (2014), Yallay Art Gallery, Hong Kong (2014), Selma Feriani Gallery, Tunisia (2014), Summaria Lunn Gallery, London (2013), Jhaveri Contemporary, Mumbai (2013, solo). He has held residencies at The Art House, Wakefield, UK (2014) and Art OMI, New York (2006) and was recipient of ‘The Land Securities Studio Award’, London (2011), ‘Melvill Nettleship Prize for Figure Compostion’, UCL, London (2011), ‘Young Painter Award’, Lahore Arts Council. Kazim’s work forms part of numerous public collections, including the Metropolitan Museum of Art, New York; The British Museum, UK; The Victoria and Albert Museum, UK; Queensland Art Gallery, Australia; Asia Pacific Museum, Pasedena; Burger Collection, Hong Kong; Creative Cities Collection, Beijing; and Kiran Nadar Museum of Art, New Delhi. The artist lives and works in Lahore.
Alexander Gorlizki (b.1967, London) received his BA from Bristol Polytechnic, Bristol, in 1994 and an MFA from the Slade School of Fine Art, London, in 1996. Recent solo exhibitions include: 'We Are One', Galerie Eric Mouchet, Paris (2014); 'What Gives?' Baldwin Gallery, Aspen Colorado(2014); 'Are We There Yet?' Galerie Kudlek, Cologne (2013); 'For Immediate Release', Van Doren Waxter, New York (2013); 'We Like It Here, We’re Not Moving', Jhaveri Contemporary, Mumbai (2012). Gorlizki’s work has been exhibited widely in private and public institutions in North America, Europe and India and is included in the collections of the Victoria & Albert Museum, London; the Royal Ontario Museum, Toronto; the Museum Kunst Palast, Düsseldorf; and the Denver Art Museum, Denver, along with a number of important corporate collections. Alexander has recently been commissioned to produce a Limited Edition Art Watch special for Swatch and his work regularly features on the covers of The London Review of Books. He is currently working on a large-scale solo show for the Crow Collection of Asian Art in September 2015. The artist lives and works in Brooklyn, NY and maintains a studio in Jaipur, India.