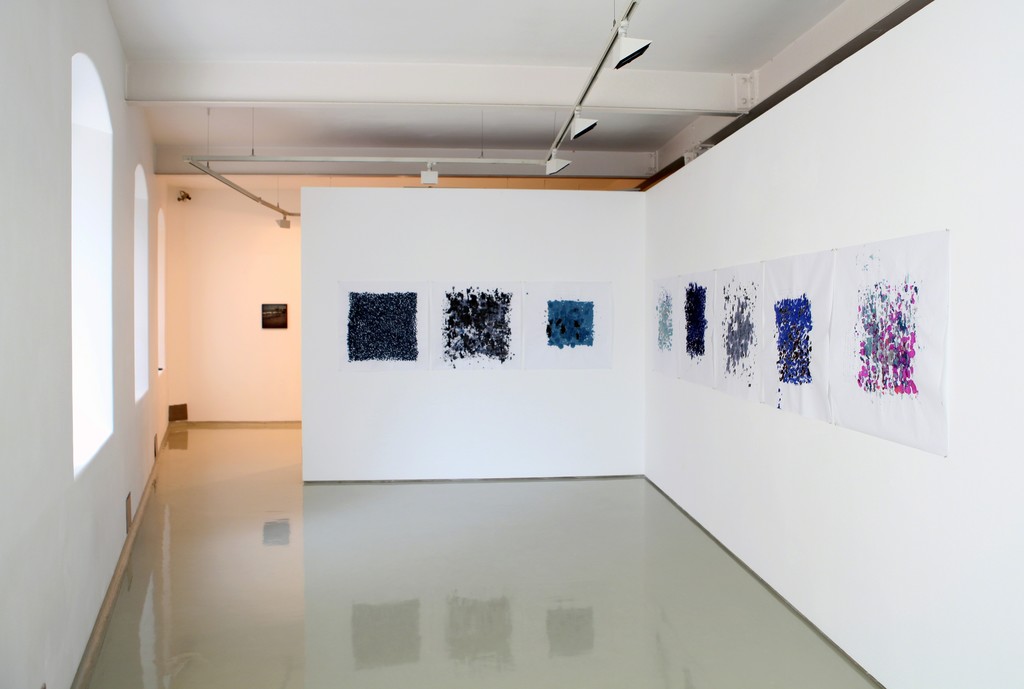 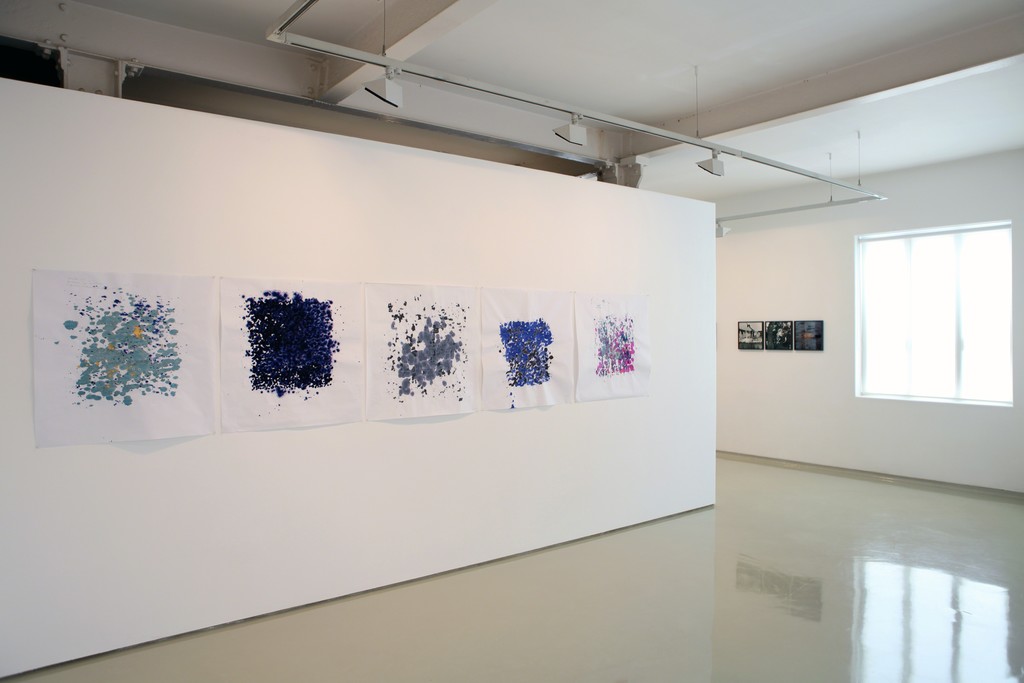 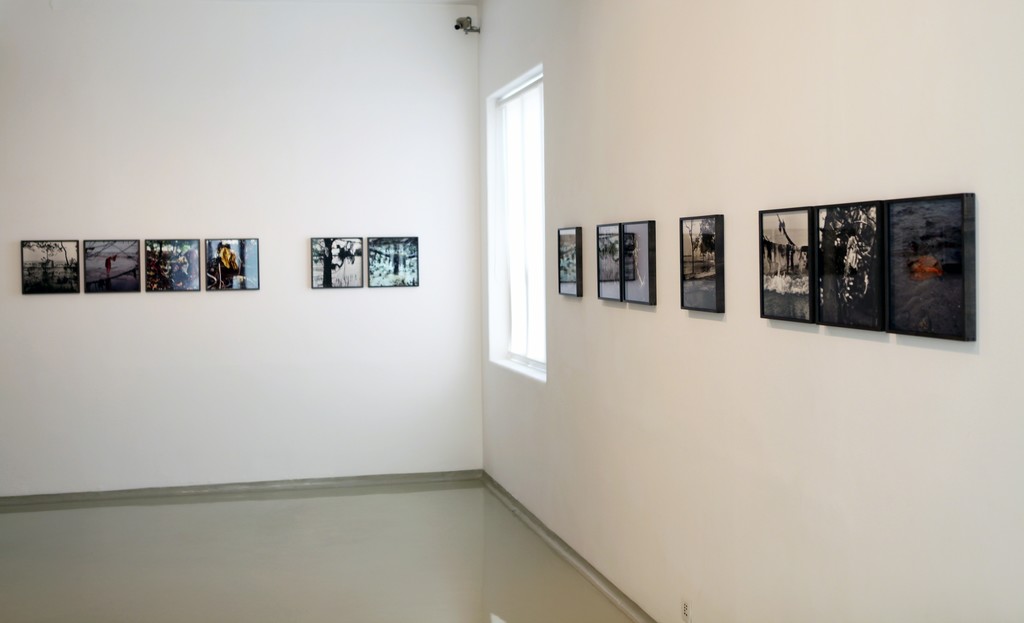 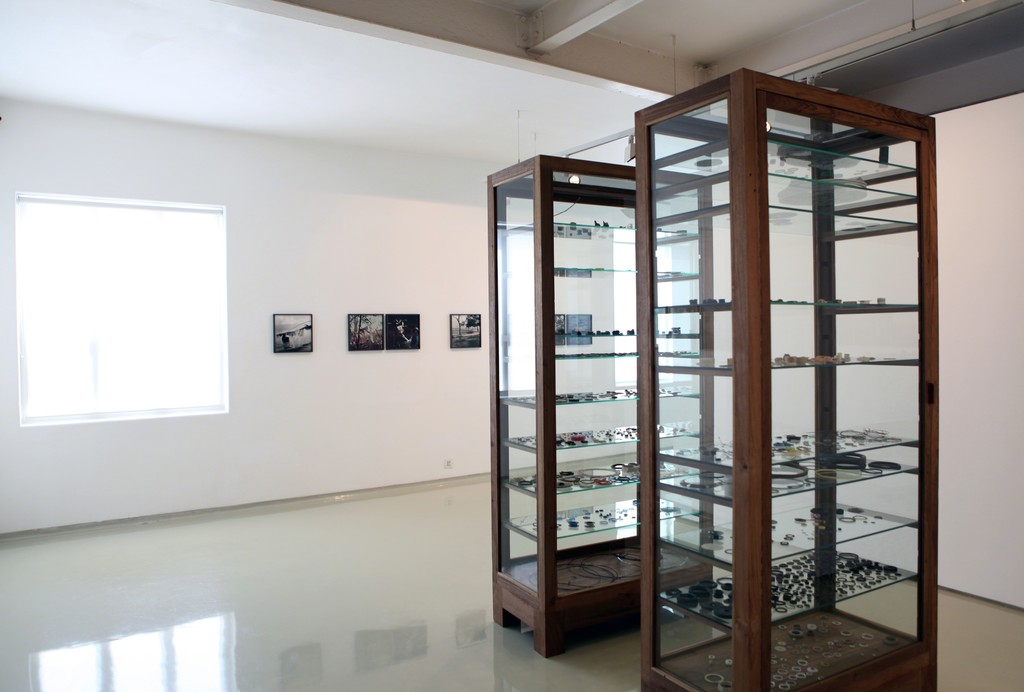 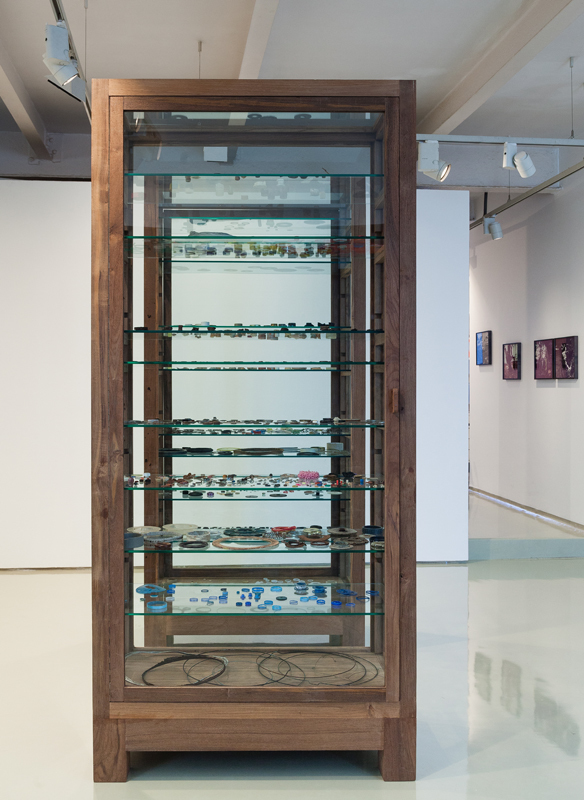 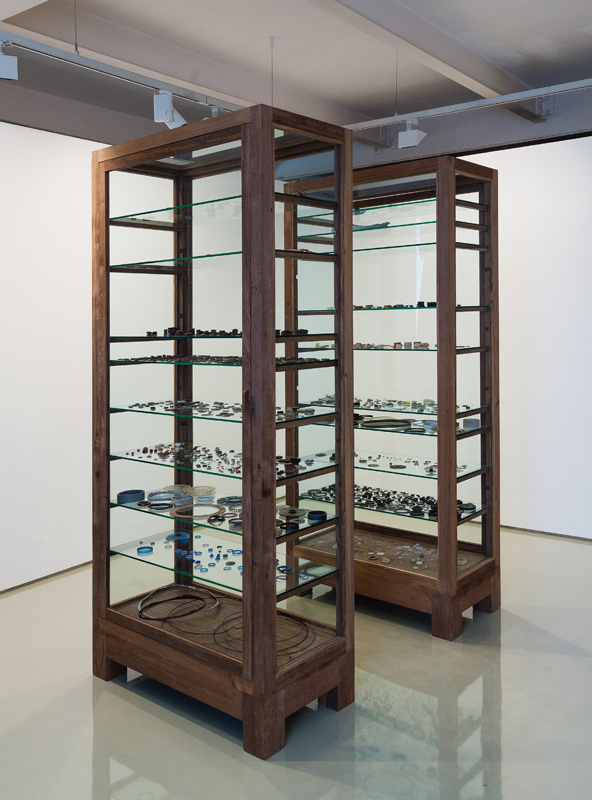 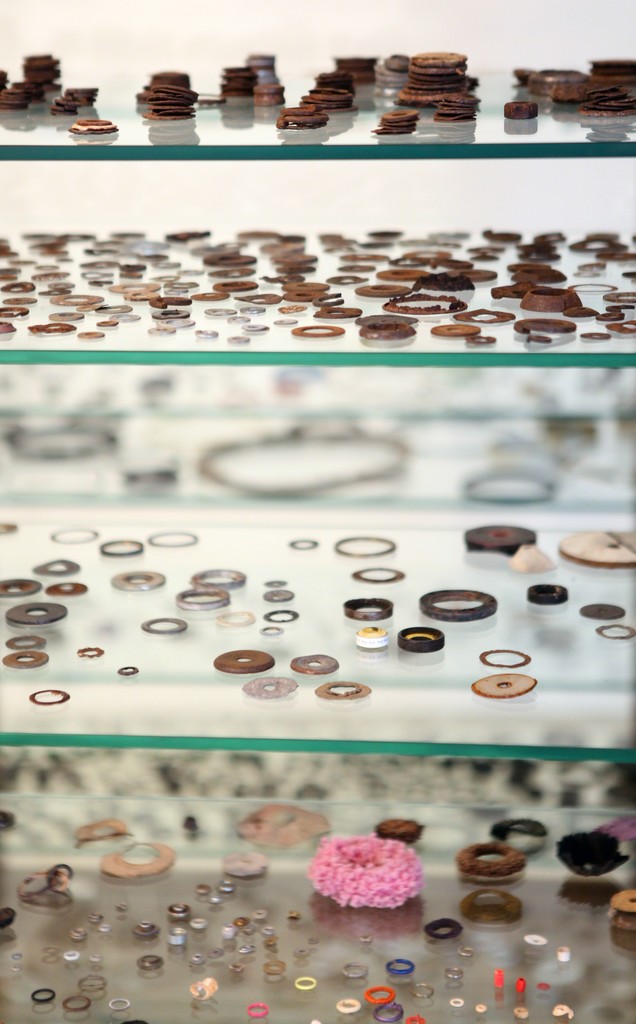 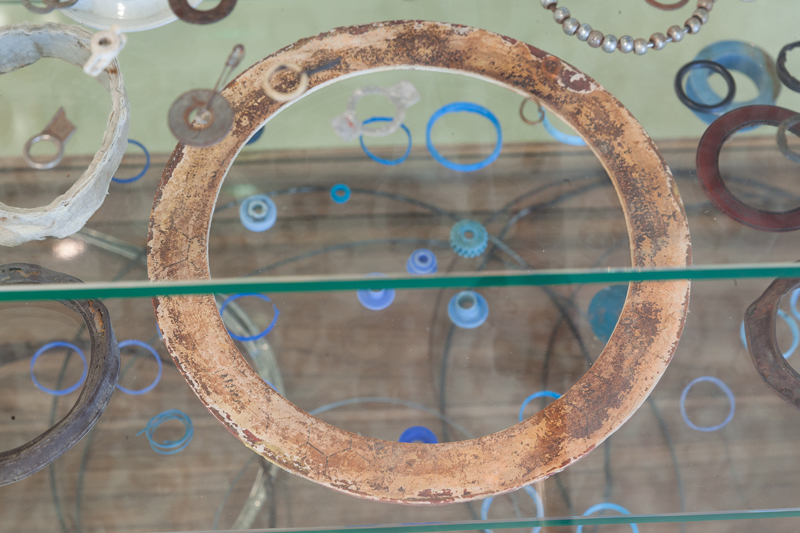 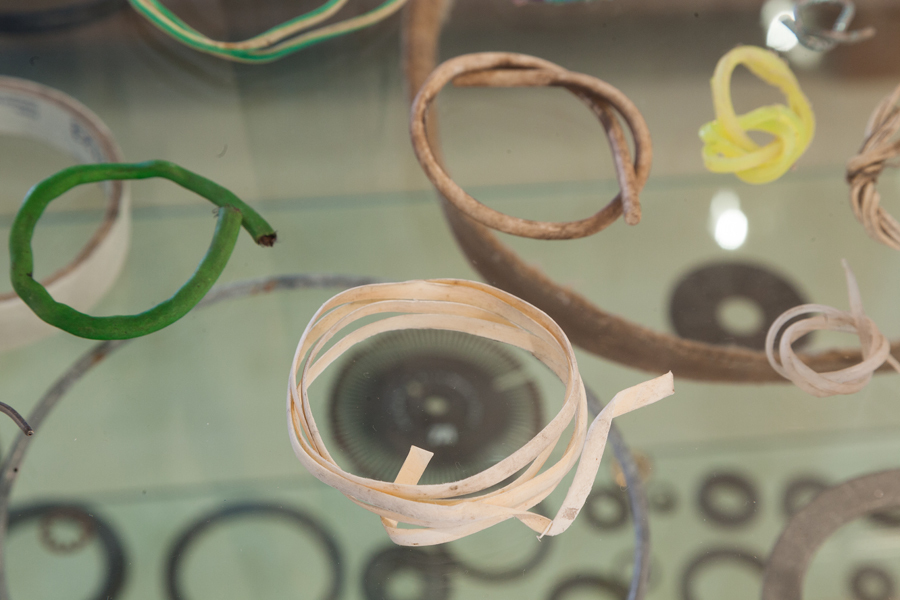 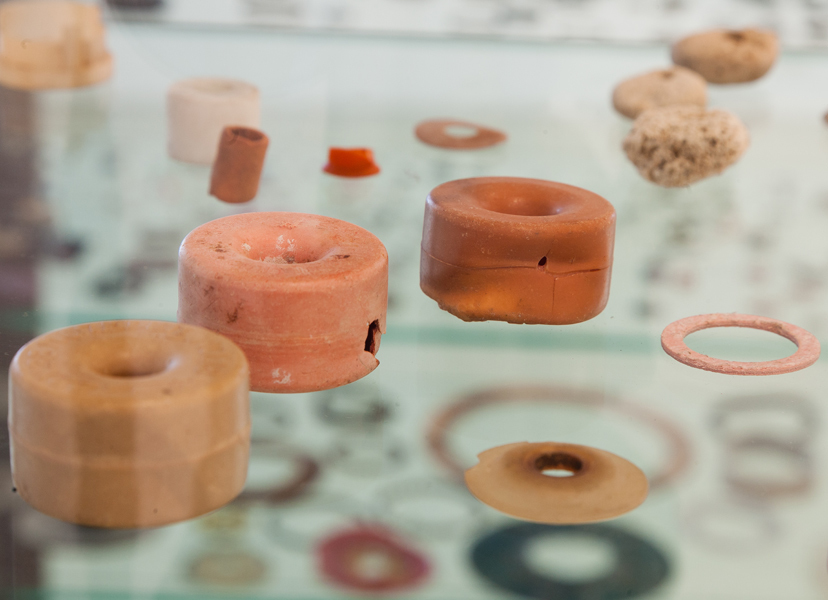 Stormy Days is Simryn Gill’s second exhibition with Jhaveri Contemporary, Mumbai, and brings together three recent works, all of which are studies in shape and found colour.
Ink Studies (Stormy Days) (2015) is a series of studies of different inks, rather than studies in ink. Positioned between writing and drawing, the stains made on mahjong paper – used as a smooth surface on which to play a game of chance and skill – are as much about the colour of the inks and the poetry of their names as about the patterns they form on paper: Rowney Kandahar India, Youth Royal Blue, Hero Washable Royal Blue, Chelpark Ruby Red, Tom Norton’s Walnut, Sea-Lion Liquid.
Channel (2014) is a series of 29 mostly colour photographs of plastic and cloth debris caught in the roots of coastal trees in front of the artist’s father’s house, becoming visible when the tide is out. As ciba-chromes printed in Sydney by Sandra Barnard, with whom the artist has worked for nearly twenty years, they are also a set of decisions made about how to work with the last rolls of a photographic paper that uniquely captures depths of colour, but is not made any more.
Naught (started in 2010) is presented as two cabinets that hold a collection of zero-shaped objects usually found by the artist while out walking. Some were given to her by friends after they got to know of her ongoing collection. They even keep these for her when they come across them, sometimes sending one or two in the post. The artist gathers these naughts in a somewhat absent-minded way, finding them here and there, mostly on the ground. They form a kind of register of time – a diary of bending over to pick something up.