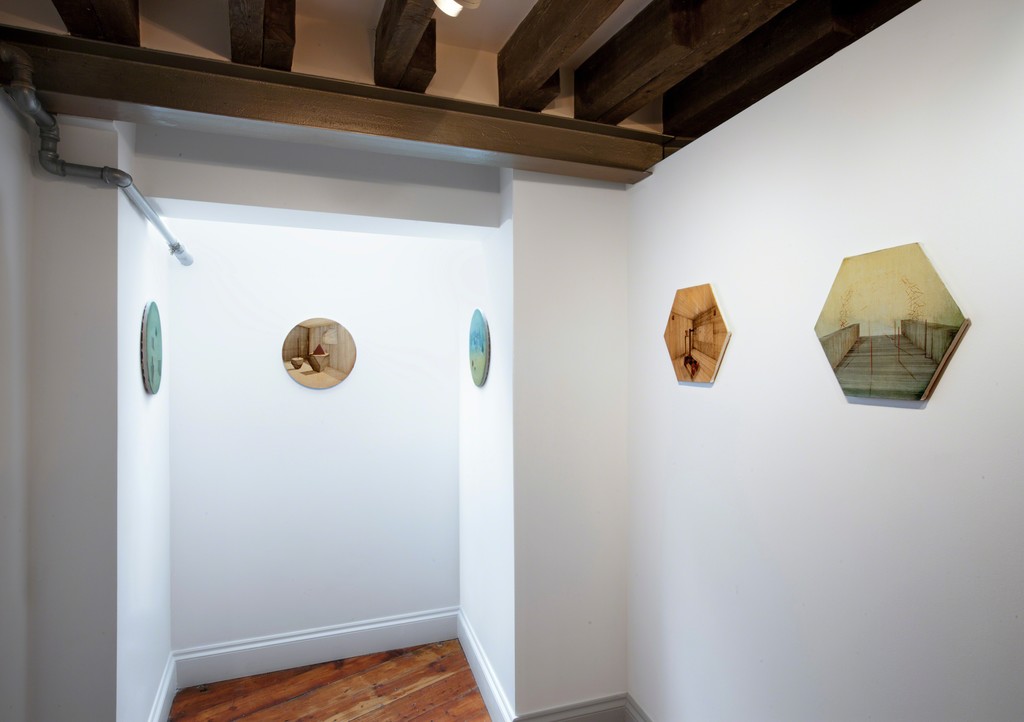 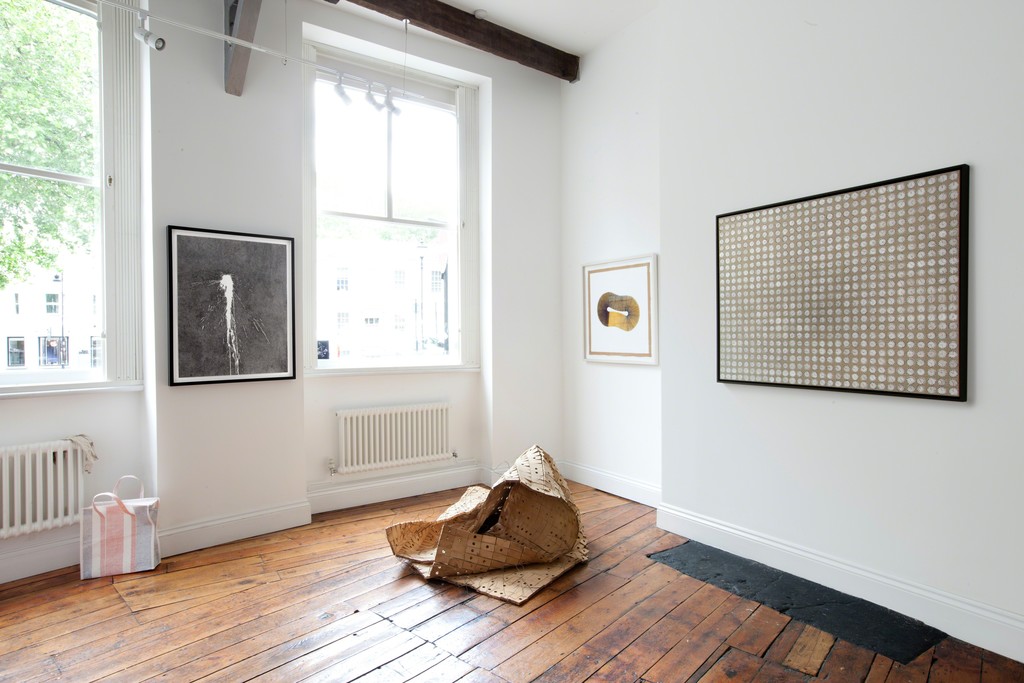 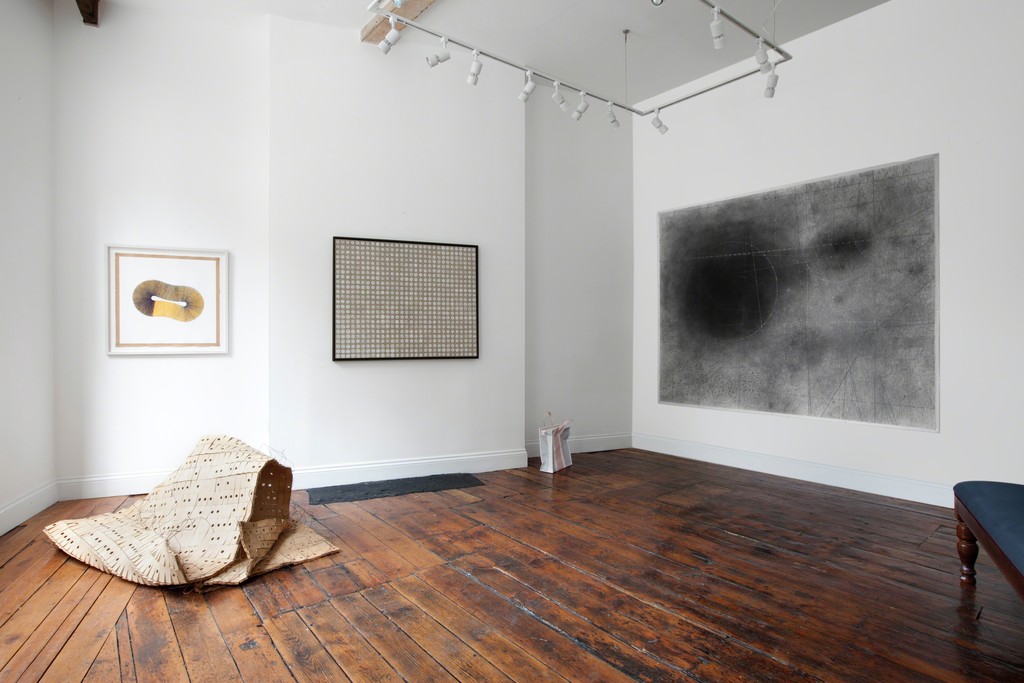 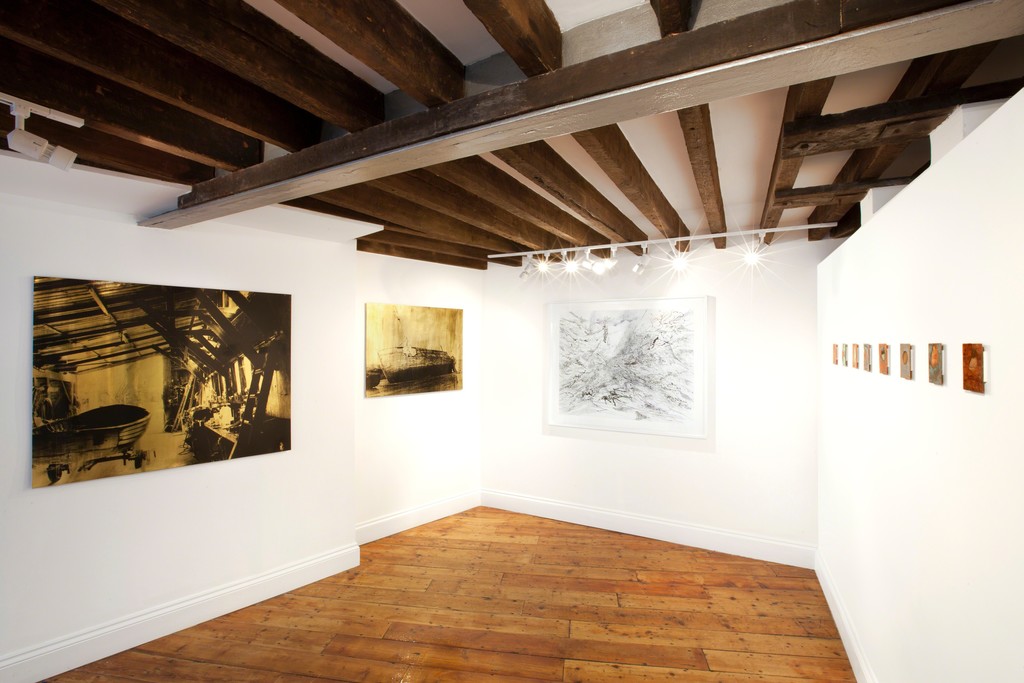 Mapping Time (2-7 June 2015, London, EC1) presents the work of nine contemporary artists, proposing new insights into the show’s eponymous themes through the resulting interrelations. Seemingly disparate practices are linked via the collective compulsion to map data by means of recording, documentation, repetitive toil and endurance, in order to examine the ephemerality of time and space. Whether in literal, temporal, conceptual, or abstract form, artists often use the duality of structure and spontaneity to create a visual conversation. In selecting the works for Mapping Time, curators Julian Page and Joanna Bryant seek to offer a stimulating, eclectic and thoughtful approach to the show’s titular premise.

The artists and works:

Victoria Burge uses maps as an interior infrastructure, transforming the patterns found within these geographies (locations of cities, railroad lines, empty highways, hypothetical coordinates) to generate new celestial terrains. Her drawings and prints often capture fleeting moments of nature: light falling on water, weightless particles of snow hanging in the thickness of cold air, or a collection of stars connected by a network of imaginary constellations. “I am interested in presence of absence. What it means to visually catalogue the idea of the space between spaces…”

Susan Collis’s deceptive artworks focus on the function and value of labour, time, endurance and repetition to highlight the metamorphic possibilities in everyday items. Her seductive drawings and sculptures of spontaneous-looking gestures or ordinary objects are meticulously crafted. Such subject matter would not normally be deemed worthy of such astonishing endurance or such humble tools, in the process of creation. “I guess my guiding principle is to get a balance between something that is very lovely or very ordinary and then the absolute opposite of that.”

Alan Franklin’s drawings and sculptures are a playful exploration of materials and processes, as well as of our perception. Proceeding from a simple strategy and at times the result of laborious repetition, Franklin manages to move the familiar towards the delightfully unexpected, creating artful, intriguing and often profoundly meditative pieces of work. “I want my work to stray or wander away from what we think we know in order to be surprised, not by something new, but by something which is already there.”

Elizabeth Hayley’s large-scale silver gelatin prints on brass, seek to trace a record and likeness of the experience of life lived on and surrounded by water, making references to the past and impermanence. Remarkably, the pictorial quality of her photographic tableaux correlates with their documentary value: about life on a ship, old vessels, or boat communities; about ways of seeing and ways of doing, yet they also invite us to experience the density and transparency of time.

Alexander Massouras combines academic conceptual and formal concerns within painting sculpture, drawing and printmaking. For Mapping Time his work ‘Now and Then’ - an exercise in recording an otherwise elusive moment - is an image of 720 clock faces, each configured to a different minute of the day. The image therefore always tells the correct time; to do so, it recruits the viewer to find the correct face. This demand is reminiscent of what Gombrich termed 'the beholder's share' in perception, describing the knowledge and cognitive function used by the viewer in order to see and interpret images.

Emma McNally’s drawings are a "visualisation of complex systems”, often associated with mappings of geological formations and constellations. They resemble the results of scientific readings yet have been made intuitively. “I mine all sorts of ways of thinking visually about space and time: the spiral paths of particles in bubble chambers, which are infinitely fast and small; images of cellular mitochondria; the Hubble Deep Field images that probe deep time, where all time is held in the surface of the image but can’t be reached. I like looking at images that show fleeting events and images of aerial views of cities at night—all the emergent formations at a macro scale that look like deep-sea organisms in the dark water.”

Julie Mehretu’s large-scale, gestural paintings are built up through layers of acrylic paint on canvas overlaid with mark-making using pencil, pen, ink and thick streams of paint. Mehretu’s work conveys a layering and compression of time, space and place and a collapse of art historical references. Her paintings present a tornado of visual incident where gridded cities become fluid and flattened, like many layers of urban graffiti. Mehretu has described her rich canvases as, “story maps of no location”. She sees them as pictures into an imagined, rather than actual reality. Through its cacophony of marks, her work seems to represent the speed of the modern city depicted, conversely, with the time-aged materials of pencil and paint.

Jayne Wilton’s work has increasingly focused on documenting, mapping and making connections between natural forces and phenomena on both a micro and macro level. She is fascinated by the universality of nature’s patterns and the poignancy of events that unfold through transient and ephemeral processes such as the changing state of materials and the human breath. Her current work with the Wellcome Foundation is continuing her investigations to embrace the in-breath and the pause between breaths, along with her work to document the dynamics of the humble spent breath. The work shown in Mapping Time, references her early recordings of the out-breath on copper plate

Joella Wheatley calculates, maps, measures and positions highly structured lines and objects that embody an enclosed space, hinting towards human activity and opening doors into the processes, complexities and voids of solitude, through perspective projection. Wheatley’s paintings invite viewers to detach themselves from the notion of normality, question their reason for being and confront isolation.

Julian Page and Joanna Bryant are independent art curators and dealers, supporting emerging and contemporary artists. From June 2015 they aim to work together to hold exhibitions that reveal surprising dialogues through the process of collaboration.

Victoria Burge’s work has recently shown at Works on Paper, Steven Amedee, NY, 2014 (solo), and included in the 2015 International Print Biennale. Her work is in collections including the British Museum, New York Public Library, Smithsonian, Philadelphia Museum of Art. She has an MFA from University of Arts in Philadelphia, 2012.

Susan Collis’s recent solo exhibitions include The Price of Nails at Meessen de Clercq, Brussels; Since I fell for you, Ikon, Birmingham; Twice Removed, Espacio Minimo, Madrid. Collis was selected as the Commissioned Artist for The Armory Fair 2010 and published three charity editions to benefit MOMA, NY. She has an MA (Sculpture) from the Royal College of Art, 2002.

Alan Franklin was awarded an MA (Fine Art) from Goldsmiths College in 1983 and has since exhibited his work on an international arena from London to Japan. He has completed residences in remote locations such as Iceland, Poland and the Grizedale Forest in Cumbria.
Elizabeth Hayley has recently exhibited in Awaiting Tide, Pascaline Mulliez Gallery, Paris, 2014 -2015 (solo) and won the Printmakers Council Award, RCA Show 2013. She has an MA (Printmaking) from the Royal College of Art, 2013.
Alexander Massouras's work is in collections including the British Museum, the Victoria and Albert Museum, and the Rhode Island School of Design Museum. He was awarded a Paul Mellon Fellowship in 2014, and is currently a Leverhulme Early Career Fellow at Oxford University's Ruskin School of Art. He read Law and then Art History at Cambridge and wrote his PhD thesis about the concept of the ‘emerging artist’.

Emma McNally studied Philosophy and English Literature at York University followed by an MA in Political Philosophy at York, 1993. Her dissertation ‘Contingency and Constraint’ explored the dynamic between doubt and certainty in relation to knowledge foundations. Recent exhibitions have included MirrorCity, Hayward Gallery, 2014-2015 (group) and Abstract Drawing, Drawing Room, 2014 (group).

Julie Mehretu was born in Addis Ababa in 1970 and lives and works in New York. She has exhibited in many important exhibitions including From Picasso to Julie Mehretu, British Museum, London, 2010 and Documenta 13, Kassel, 2012. In 2015 she was honoured with the US State Department's 'National Medal of Arts'. She has an MFA from Rhode Island School of Design, 1997.

Jayne Wilton has an MA (Fine Art) from the Slade School of Fine Art, 2010 and has since completed a Leverhulme funded residency at Brunel University where she worked in collaboration with particle physicists Professor Peter Hobson and Professor Akram Kahn. She has since completed a residency with the Royal Brompton Hospital and is currently appointed to the Wellcome funded Life of Breath Project.

Joella Wheatley is an emerging contemporary artist, graduating from the Arts University Bournemouth in 2012. Since then she has been shown in Zeitgeist Arts Projects, The Future Can Wait & Saatchi New Sensations, and I Cheer a Dead Man’s Sweetheart at De La Warr Pavilion, Bexhill.