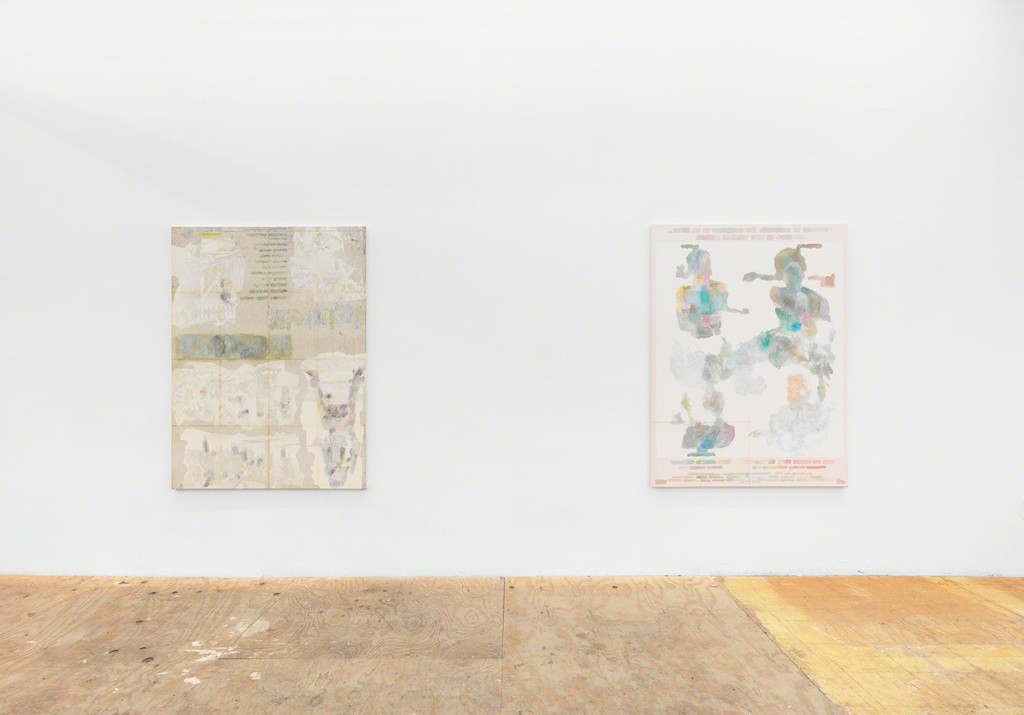 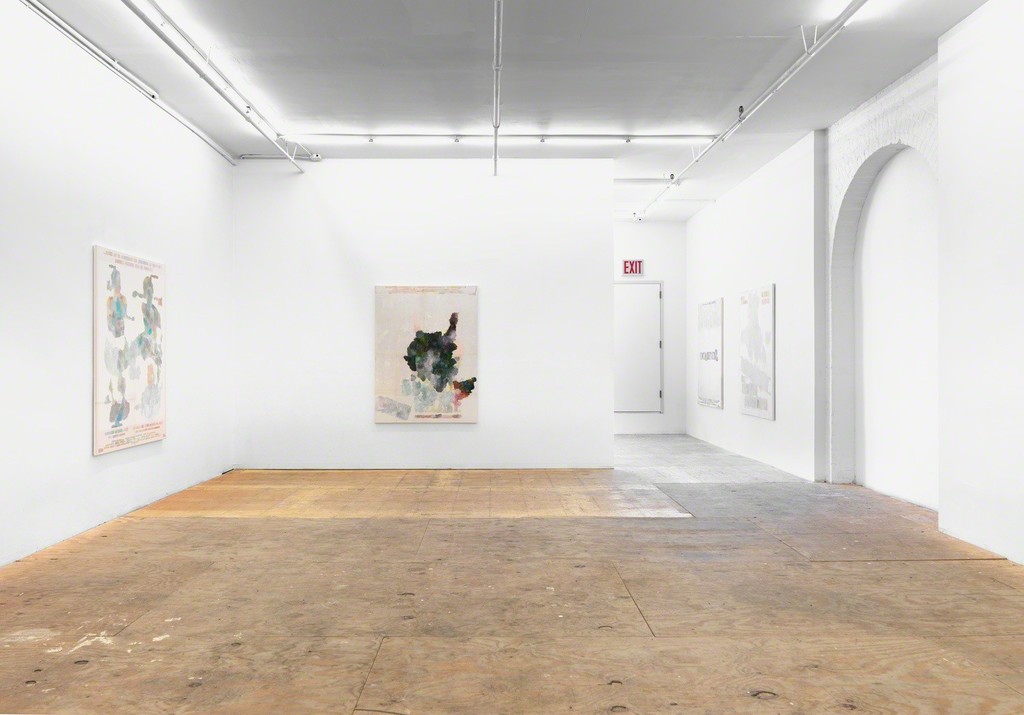 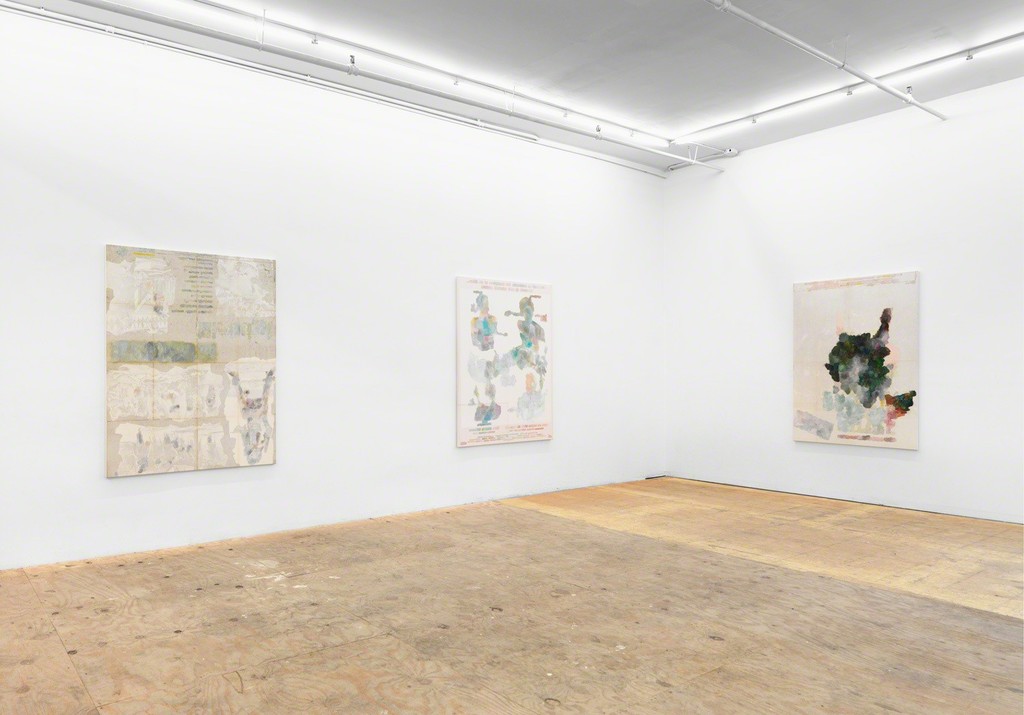 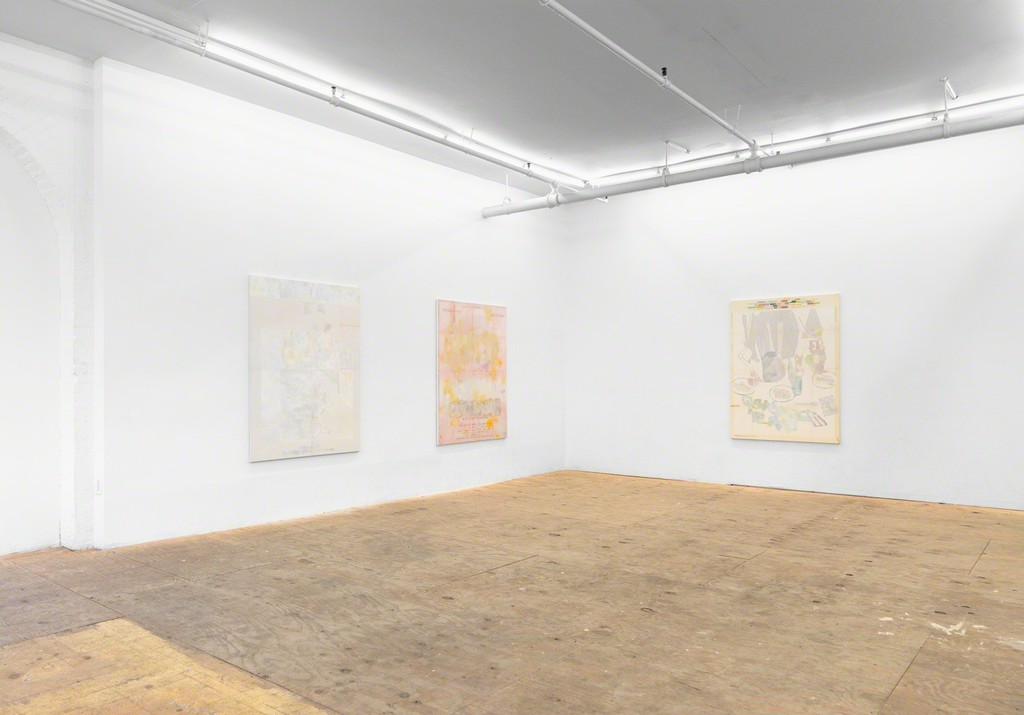 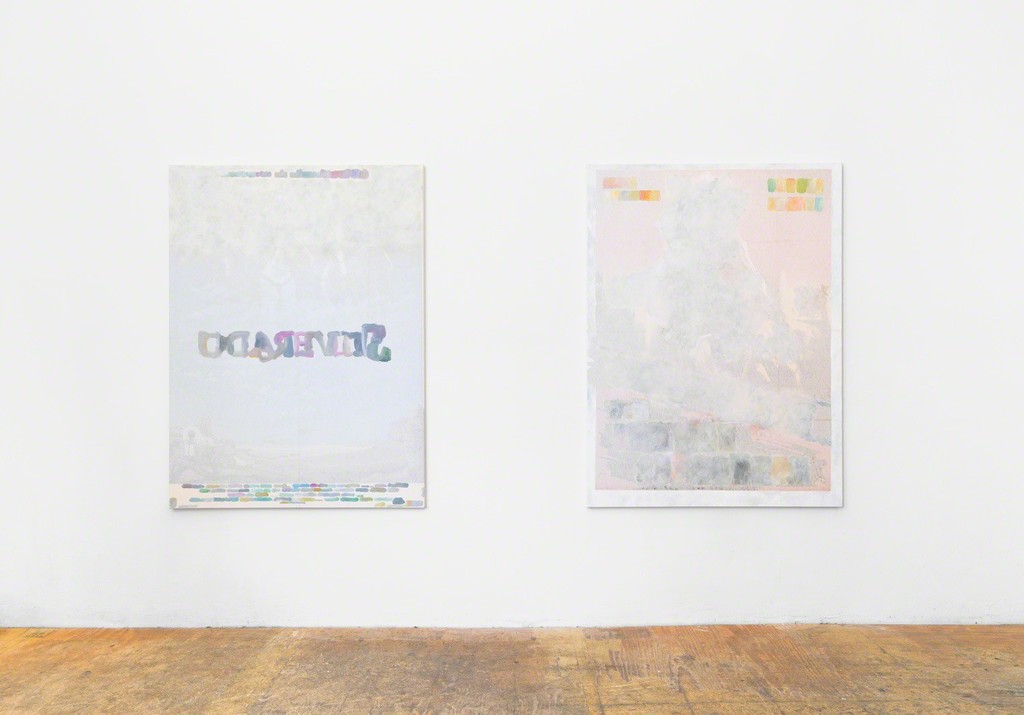 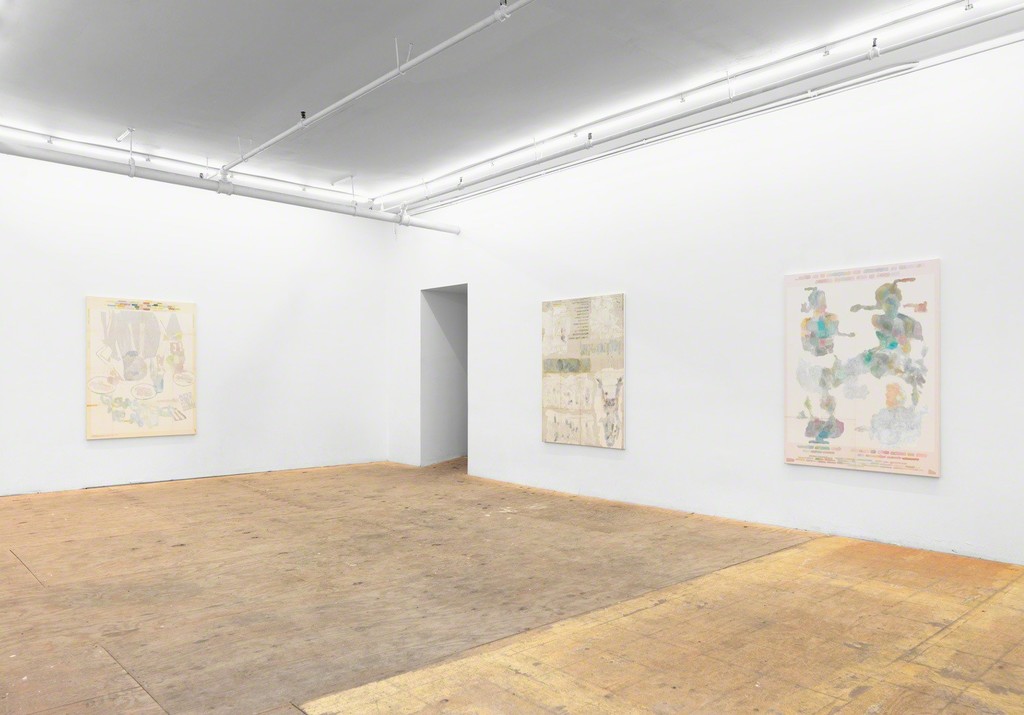 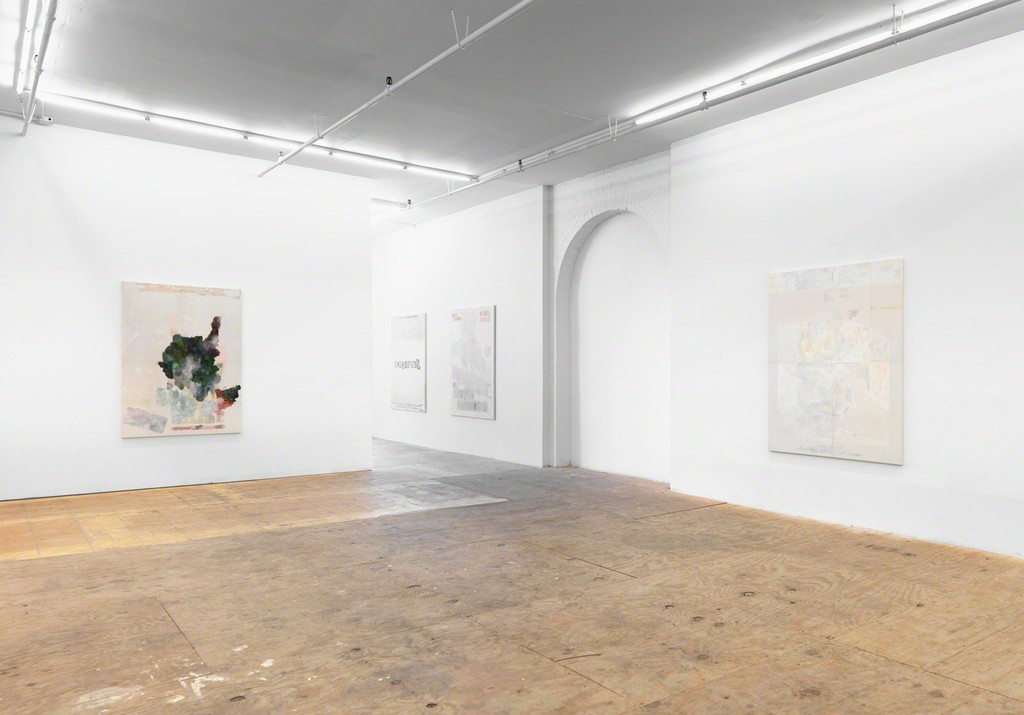 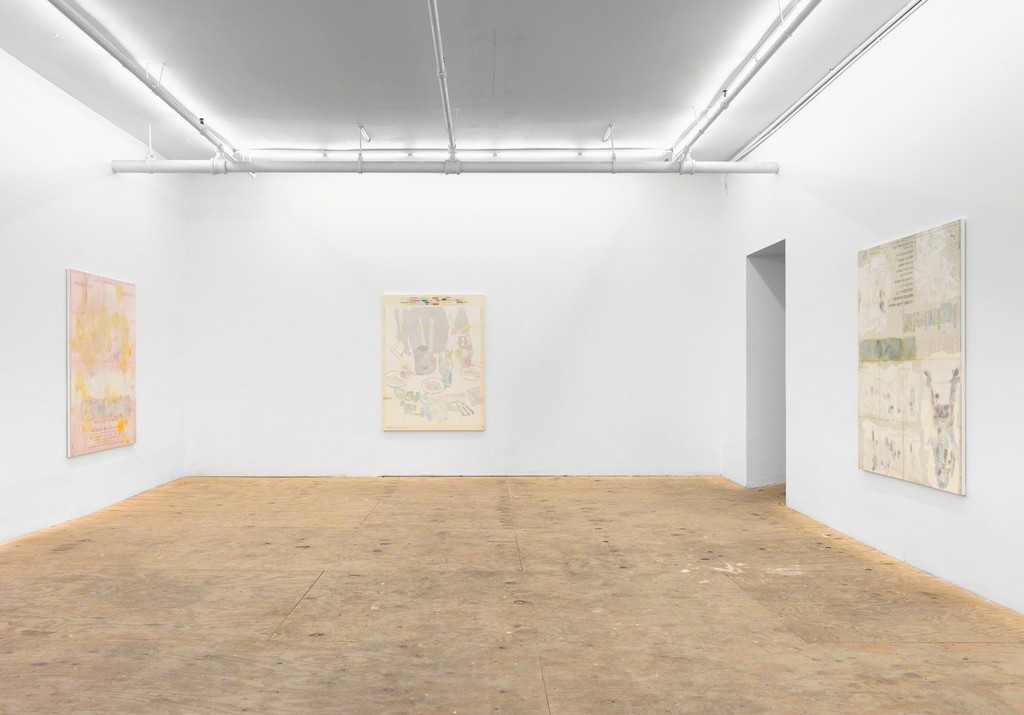 Johannes Vogt Gallery is pleased to present “Behind The Scenes,” the first solo exhibition by
Brussels-based artist Benoit Platéus at the gallery. The exhibition features new paintings from
Platéus’s Behind the Scenes series, atmospheric canvases fashioned from old movie posters. In
the works exhibited, Platéus uses painting not to represent but to blur an image—to emphasize
as much as to obscure.
To create the Behind the Scenes paintings, Platéus reverse-mounts movie posters—often
posters for old B-movies or forgotten films, which he sources online and in dedicated shops—on
canvas and then paints directly onto them. Though the posters face backwards, a few details
show through: fragments of text, outlines of a figure. Platéus paints in response to these, adding
or erasing details with a faint pastel palette so that they don’t quite resolve into comprehensible
information. Instead, the details form subtle fields of color on the surfaces of the paintings, which
hover delicately between abstraction and figuration.
Platéus is interested in the nature of images: how they transmit information, how they mutate and
break down, how they represent and generate reality. Found images often serve as a starting
point for his work—as in the earlier series Ghostburn, in which the artist re-photographed archival
images, allowing the resulting photographs to be warped by sunlight. With Ghostburn as well as
Behind the Scenes, found images incite a sense of nostalgia for a lost, or rapidly degrading, past.
This sense of impermanence, of the fragility of visual culture, extends throughout Platéus’
practice. Central to his work is the idea of the fade, referring both to the material effects of his
intervention into the posters, but also to a temporal process—to the gradual aging and sunbleaching
of images over time. Yet despite the pigments Platéus uses to conceal, traces remain.
And those traces enable the viewer to “unfold”—the posters often come to Platéus literally folded,
and their creases remain visible even once they have been applied to canvas—the paintings,
allowing their multiple layers of meaning to emerge. With these paintings, Platéus suggests new
ways that we might see, and read, images.
BENOIT PLATÉUS was born in 1972 in Liège, Belgium. He lives and works in Brussels. Recent
solo exhibitions include Skibum MacArthur, Los Angeles; Galerie Albert Baronian, Brussels;
Annarumma Gallery, Naples; and Galerie Jeanroch Dard, Paris. His work has been exhibited at
Palais de Tokyo, Paris; Karma, New York; Almine Rech, London; among elsewhere, and is
included in several collections around the world, among them the Fond National d’Art
Contemporain, France and the Musée d’Ixelles, Belgium.