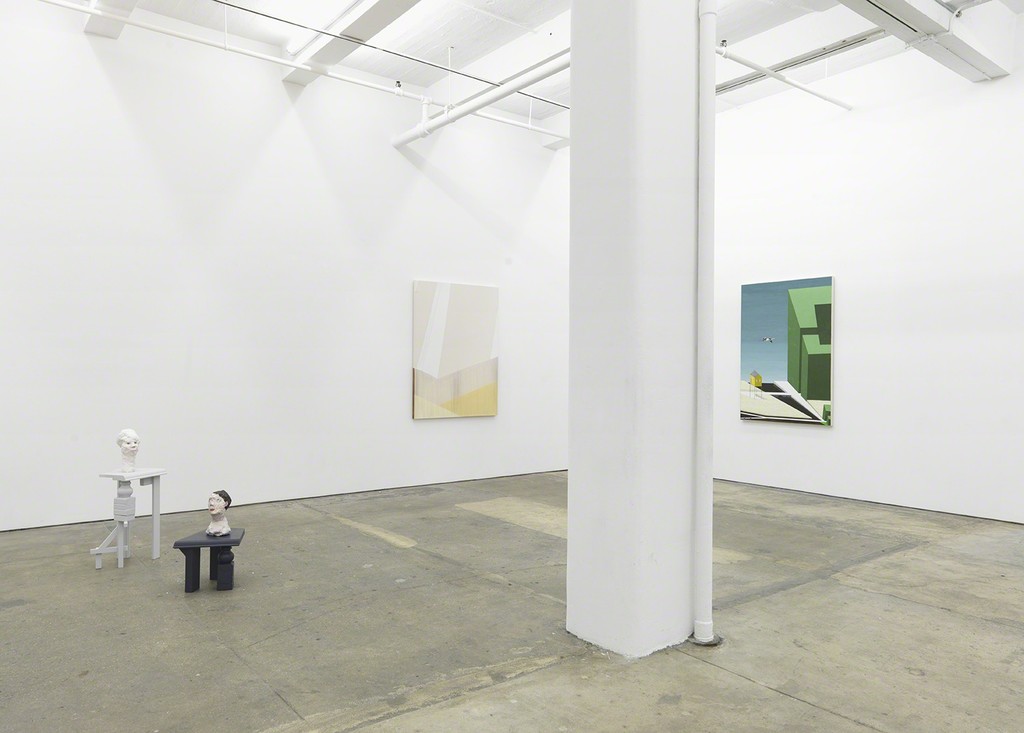 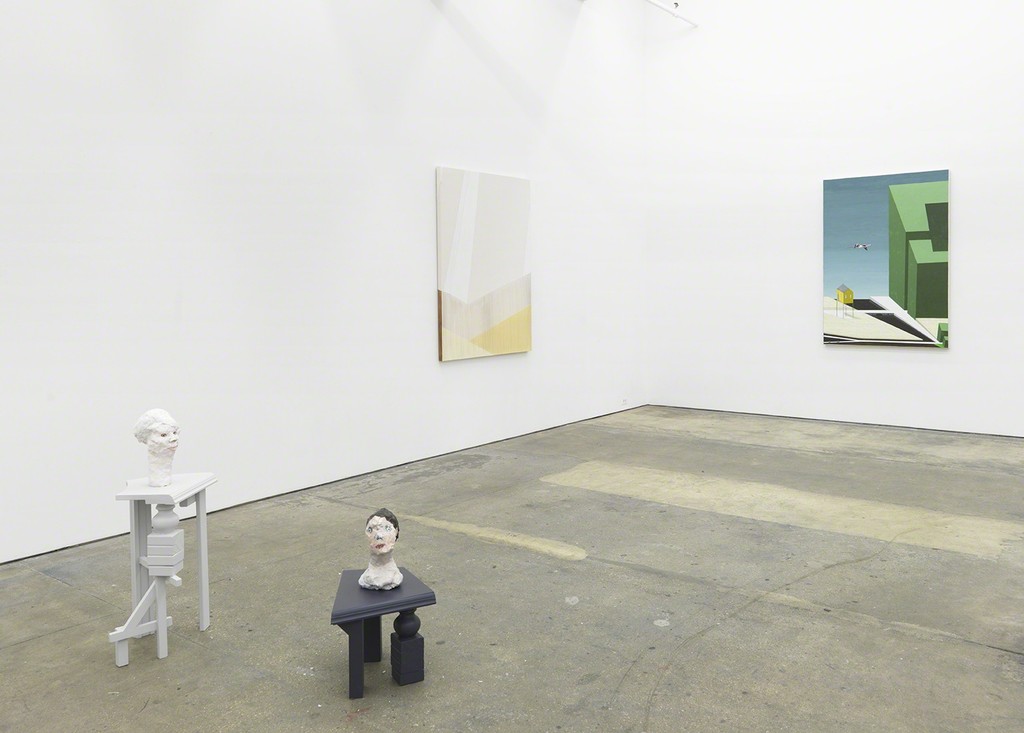 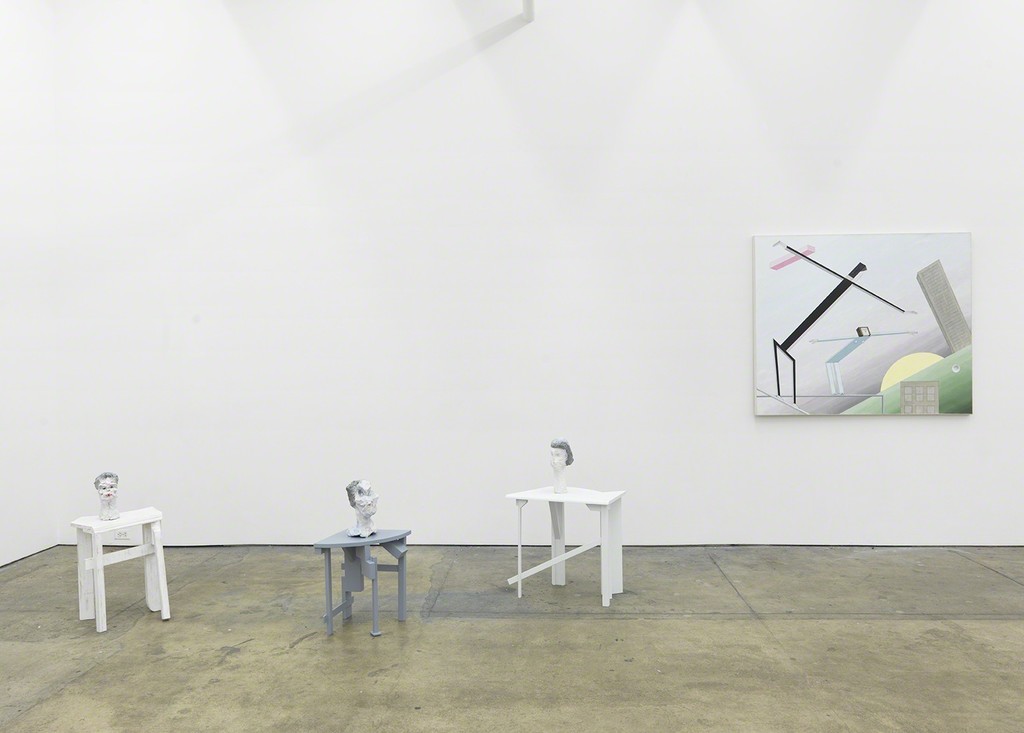 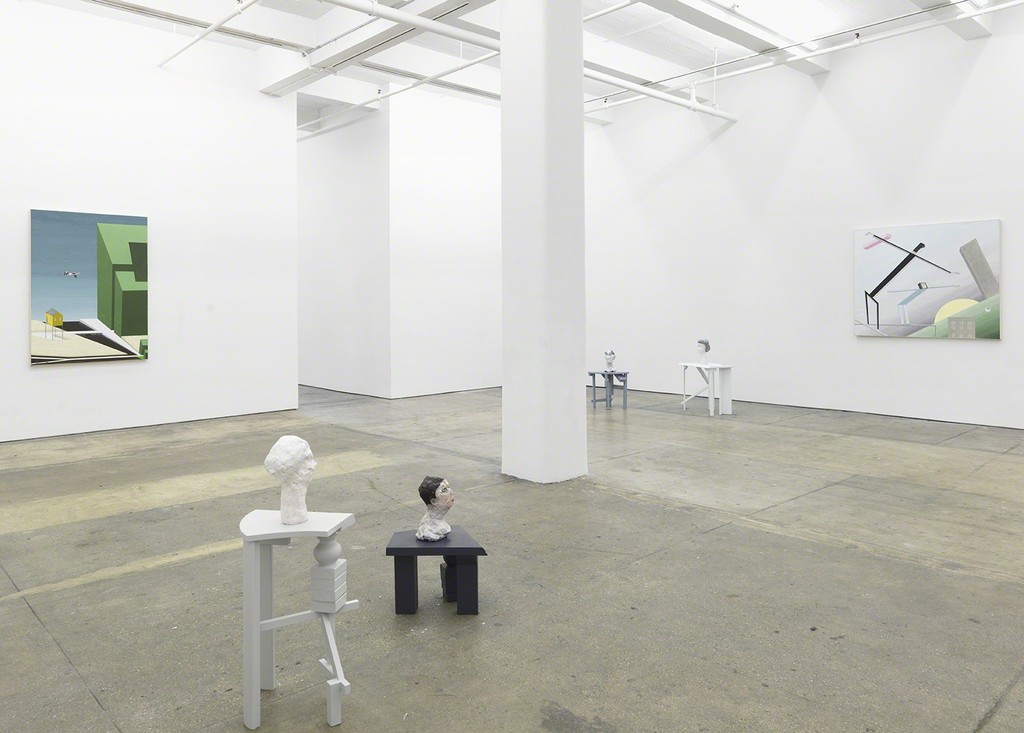 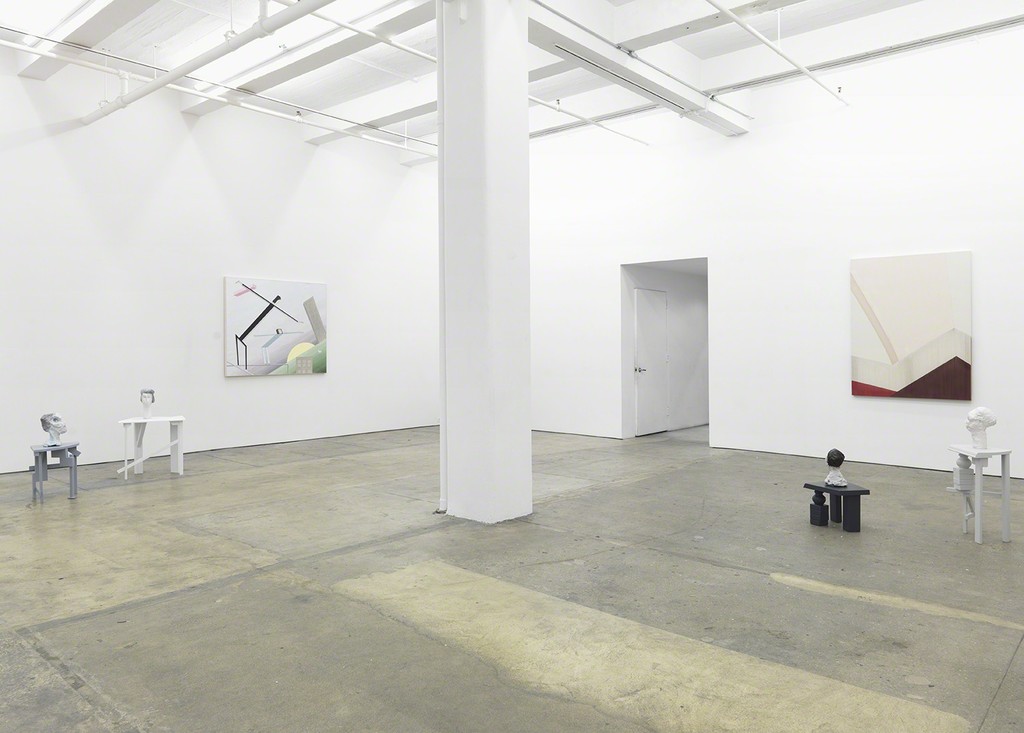 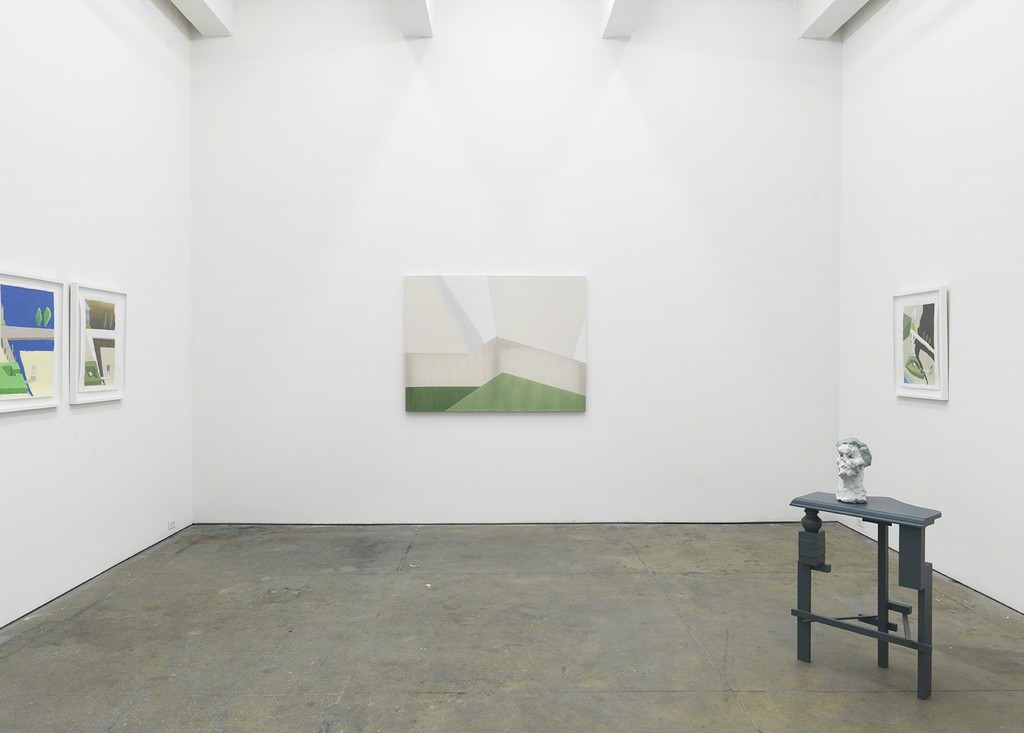 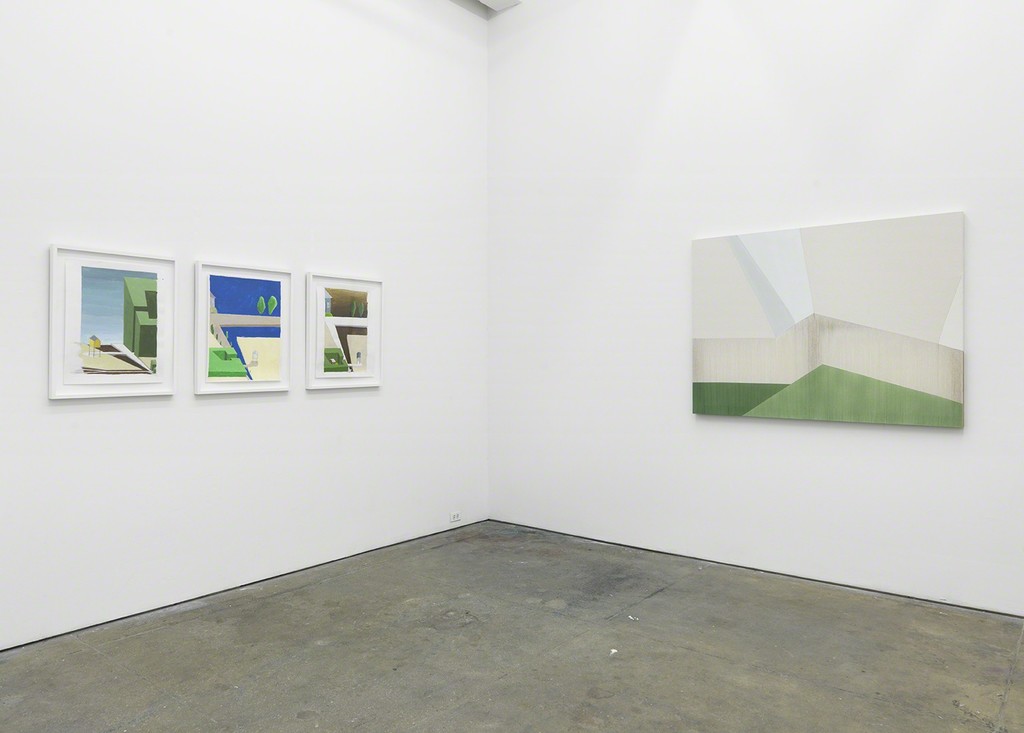 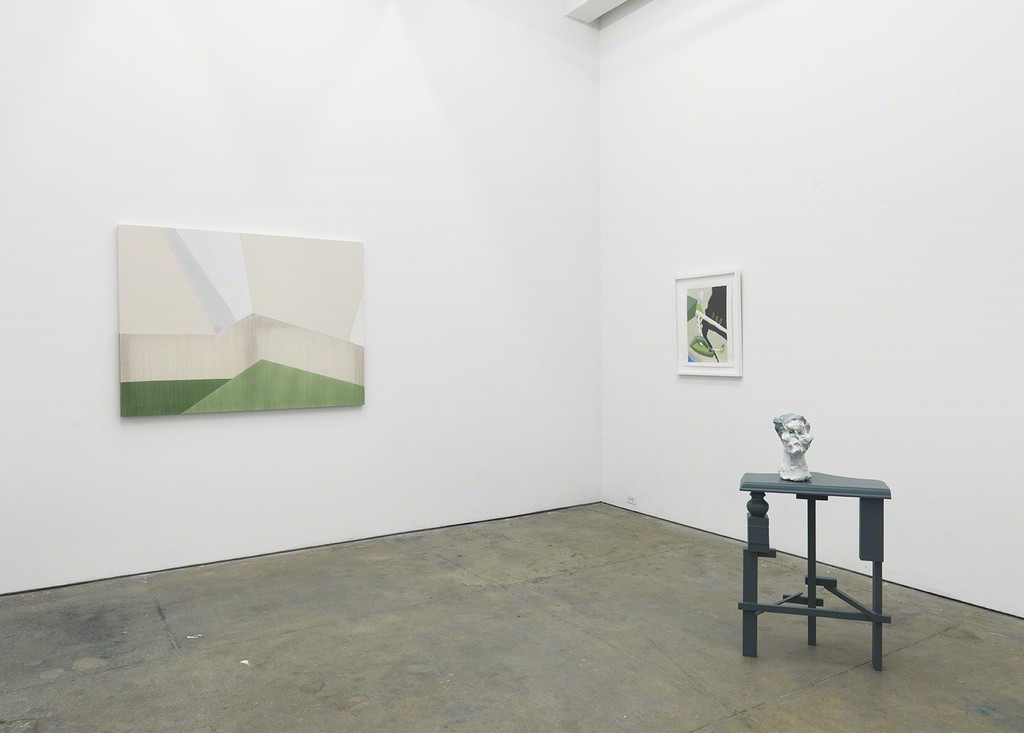 Johannes Vogt Gallery is pleased to present 3 Shifts, a three-person show featuring works by Garth Evans, Mernet Larsen, and Rebecca Ward. “3 Shifts” explores a dialogue between generations of practices which engage with the shifts and distortions that can occur in the abandonment of idealism. With varying approaches to sculptural forms, perspectival skews, and an awareness of the substrate through delicate deconstruction, the three artists’ works relinquish what should be in exchange for what can be.

Garth Evans' latest sculptural work combines his life-long engagement with abstract forms and his interest in the human head. A group of strangely identifiable characters sit atop wooden structures of constructivist appeal, generating an ever-changing dialogue between personalities and forms.

Mernet Larsen has been developing her unique mode of geometric figuration since the early 1980’s. While her paintings evoke the aesthetics of the digital, they are in fact grounded in Russian Constructivism, Japanese Narrative scrolls, and 15th Century Italian painting. Furthermore, they aim to dislocate the viewer by establishing interactions between Renaissance, isometric and reverse perspectives. “3 Shifts” features pieces from her “Great Outdoors” series. Floating figures are depicted against abstracted landscape backdrops where they meet a mimetically rendered flying flamingo - Larsen's interpretation of a scenery observed in Ozello, FL.

Rebecca Ward subtracts elements of painting by conflating canvases and volumes. Similar to minimalist practices, Ward employs clean lines and geometric forms derived from the digital to create her work. However, in contrast to the industrial materials normally used by the genre, Ward employs the dyeing, unraveling and sewing of canvas, leather and silk, which inserts domestic feminine practices, penetrating the male discourse and providing a new layer of meaning to abstracted images.

Garth Evans (Manchester, UK, 1934) settled in the USA at the midpoint of his career. He has exhibited widely in Europe and the United States since the early 1960s. His work is represented in major public and private collections in Australia, Brazil, Portugal, USA and the UK, including MoMA, Metropolitan Museum, Brooklyn Museum, the Arts Council Collection, the British Museum, the Victoria & Albert Museum and the Tate. Evans has been the recipient of numerous awards, as well as holding a number of distinguished teaching positions. Since 1988, he has taught at the Studio School in New York City where he is head of the sculpture department. In 2013 Philip Wilson Publishers, London, released a well-illustrated scholarly book on Evans’s practice, edited by Ann Compton.

Mernet Larsen (1940) has recently been the subject of solo exhibitions at James Cohan, New York (2016), Various Small Fires, Los Angeles (2015), and Johannes Vogt Gallery, New York (2012). In 2016, Larsen was selected to be included in Phaidon Press’s forthcoming edition of the Vitamin P: New Perspectives in Painting series, to be published this fall. Reviews of her work have also appeared in Mousse Magazine, ArtForum, The New York Times, Hyperallergic, ArtReview, and The LA Times.Additionally, her work is housed in many significant collections, including The Walker Art Center, Minneapolis, MN., Los Angeles County Museum of Art, CA., Zabludowitz Collection, London, Levy Collection, Paris, Ringling Museum of Art, FL, Museum of Fine Arts, St. Petersburg, FL, and the Tampa Museum of Art, FL. Since the late 1970s, Larsen has exhibited extensively in Florida, having over 30 solo exhibitions, including career retrospectives at the DeLand Museum of Art, Florida (1992), and the Morean Art
Center, St. Petersburg, Florida (2010). In addition, Larsen has been part of over 70 group shows including Sadie Coles HQ and White Cube in London, the National Museum of Womenin the Arts in Washington D.C., and the American Academy of Arts and Letters, Regina Rex, the New York Studio School Gallery and Lisa Cooley in New York City.