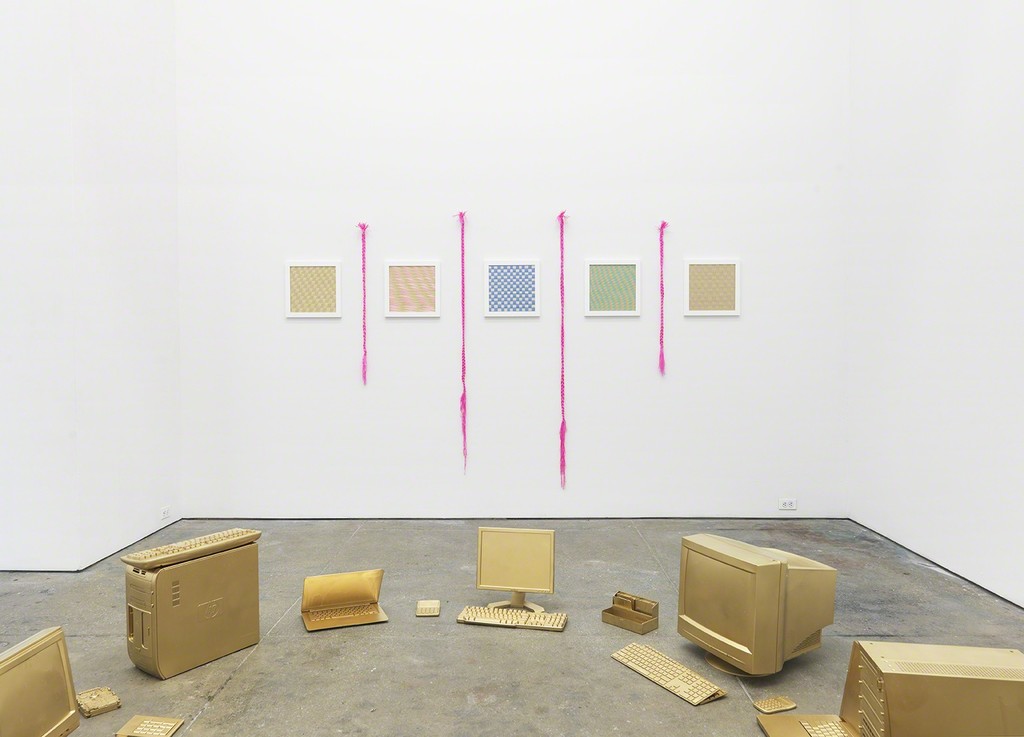 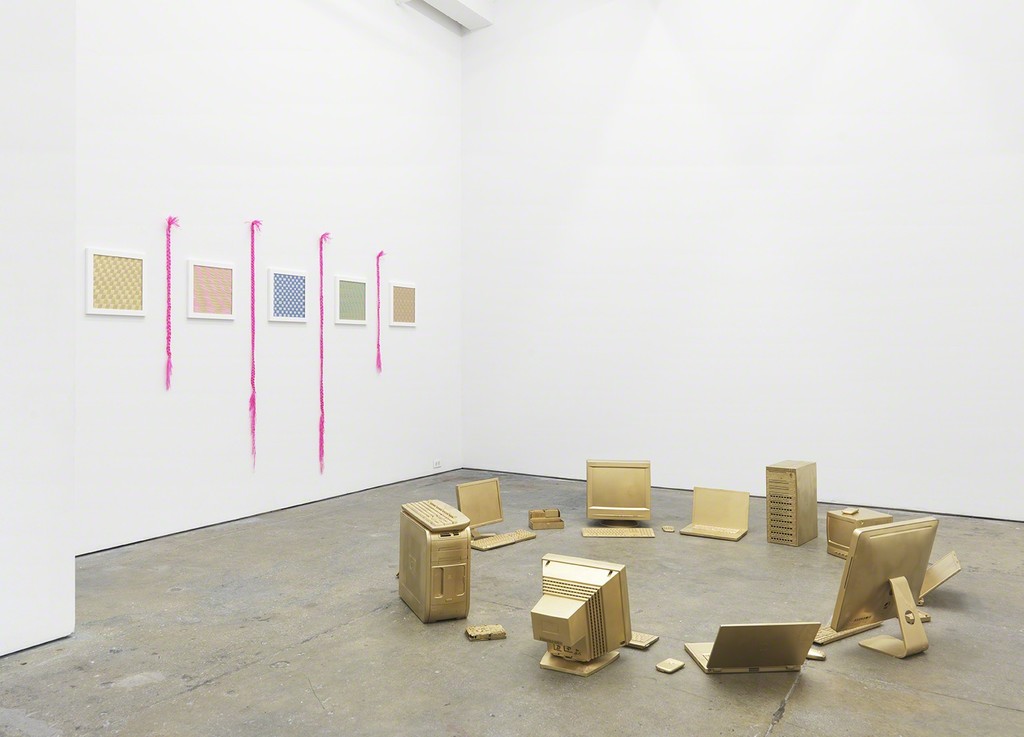 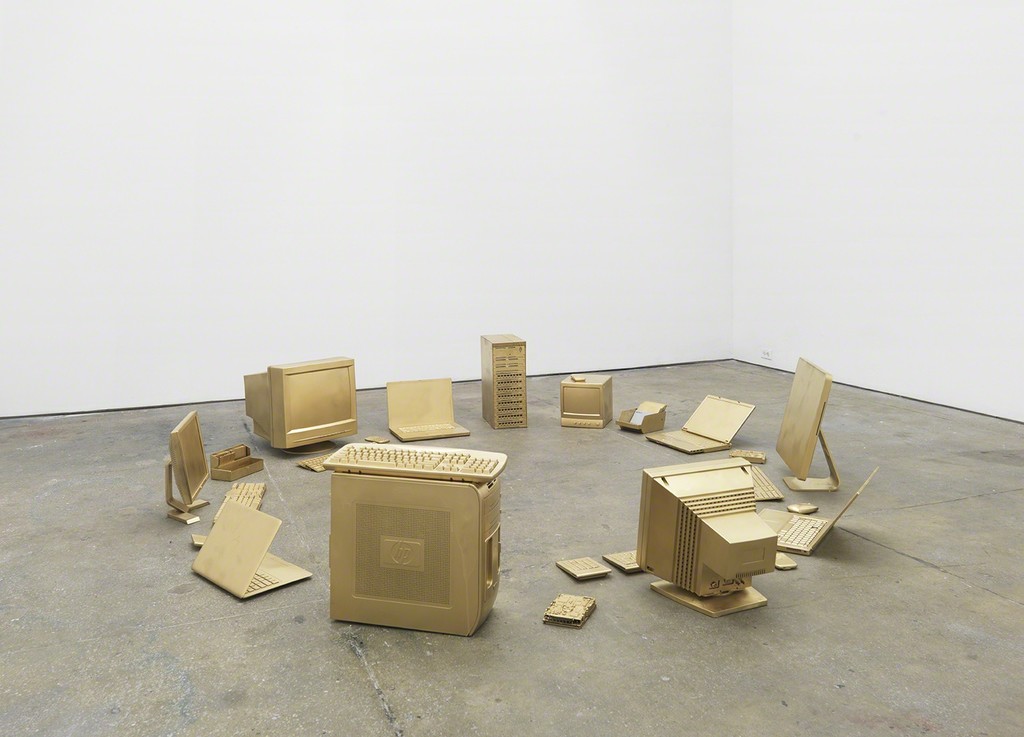 Johannes Vogt Gallery is pleased to present “Fool’s Gold," an exhibition by Marisa Olson, that continues the artist’s ongoing research on our relationship to technology and its effects on memory and the environment. The show features new sculpture, glitter paper-based weavings, and oversized friendship bracelets.

The sculptures in Olson's Time Capsules series trace her concern with what she calls "upgrade culture" and the environmental impacts of consumers' constant cycle of procuring and trashing once-coveted objects of commodity fetishism in favor of newer toys & tools. Olson sees these technological objects as both vessels of cultural change and endangered units of time. Whereas most time capsules are buried, Olson is trying to prevent these artifacts from landfill interment, instead rescuing them, taking the objects out of circulation, and painting them gold ("Fort Knox-style") in reclamation of their value.

Fool's Gold will feature an installation of computers, smartphones, and related components assembled in a circular, Stonehenge-like monument. Presented in this self-conscious manner, viewers are reminded of the life-cycle of these deceased devices. Beginning as inanimate objects uniformly rolling-off assembly lines, the forms becoming deeply personal when users begin staring at them for hours a day, holding them close to their bodies, sleeping next to them, constantly stroking their surfaces, speaking to and through them, and investing in them spiritual value that swells over the duration of the relationship. Whereas these objects are typically demoted to the status of inanimate again immediately upon being dumped for younger models, Olson's installation works to retain the sense of intimacy attached to them.

The same themes are carried-through into Olson's oversized friendship bracelets, shaggy braids of hot pink construction twine whose form pays homage to Second-Wave feminist crafts while hanging somewhere between comfort object and the string tied around a finger for the purposes of remembering. Each plait is a visual mnemonic for the lifecycle on view, hardware store materials exposing the soft side of our friendship with computer hardware.

Likewise, Olson's "pixel weavings" use the vernacular material of glittery scrapbook paper meant to resemble blingy animated gifs, the uniform size of which was predetermined by a behind-the-scenes series of corporate conversations determining that 12x12 inches is the industrial standard par excellence for preserving and displaying one's memories. Extending the language of gilding to the weavings, Olson performs an overlapping of pop and folk gestures in these sparkly planes that serve to consider the disposable versus archival status of photographic memories in an era of digital photography. As with the Time Capsules, the Pixel Weavings offer meditation on the tension between the things we choose to preserve versus the memories we elect to bury.

Olson is also an active media scholar whose writings on digital media, performance, and postinternet art have been widely published, translated, and anthologized. Previously Editor & Curator of Rhizome, she has also curated programs at the Guggenheim, New Museum, SFMOMA, White Columns, and Artists Space. She studied Fine Art at Goldsmiths, History of Consciousness at UC Santa Cruz, and Rhetoric & Film Studies at UC Berkeley. She has recently been a visiting artist at Yale, SAIC, Oberlin, and VCU; a Visiting Critic at both Brown & RISD, and Visiting Faculty at Bard College's Milton Avery Graduate School of the Arts.