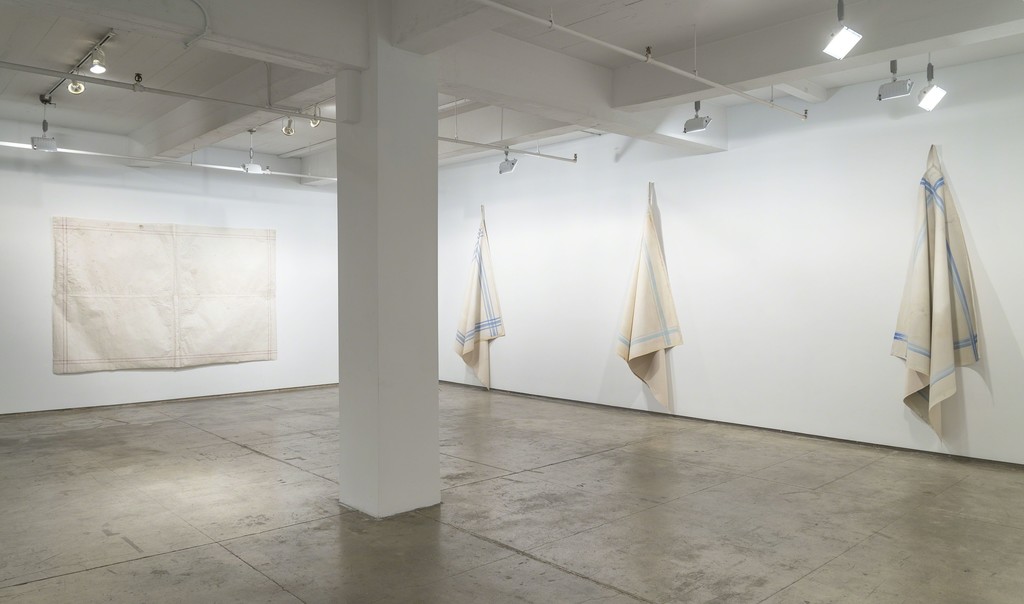 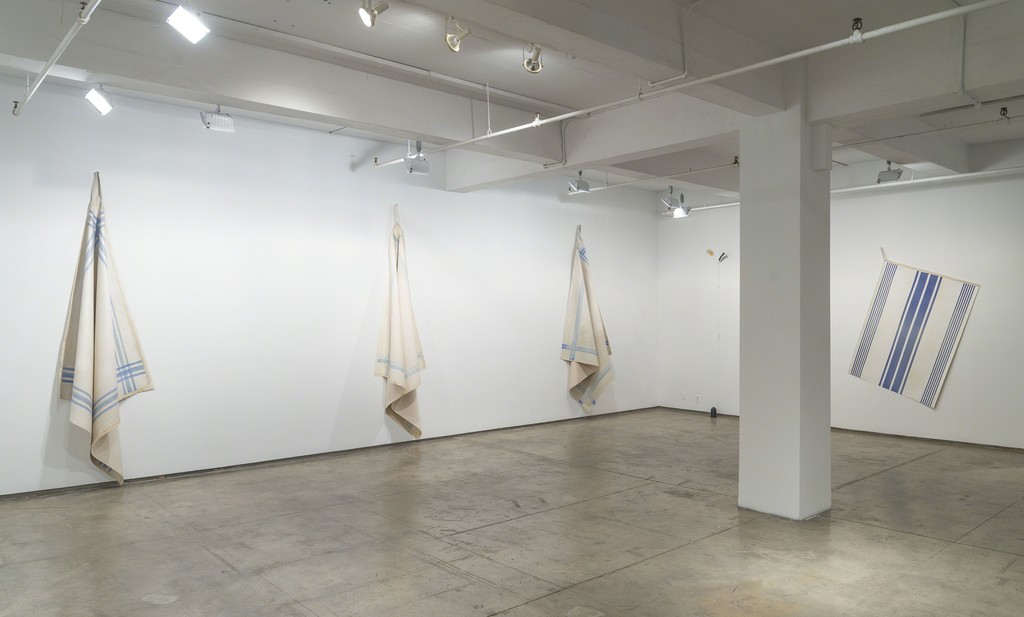 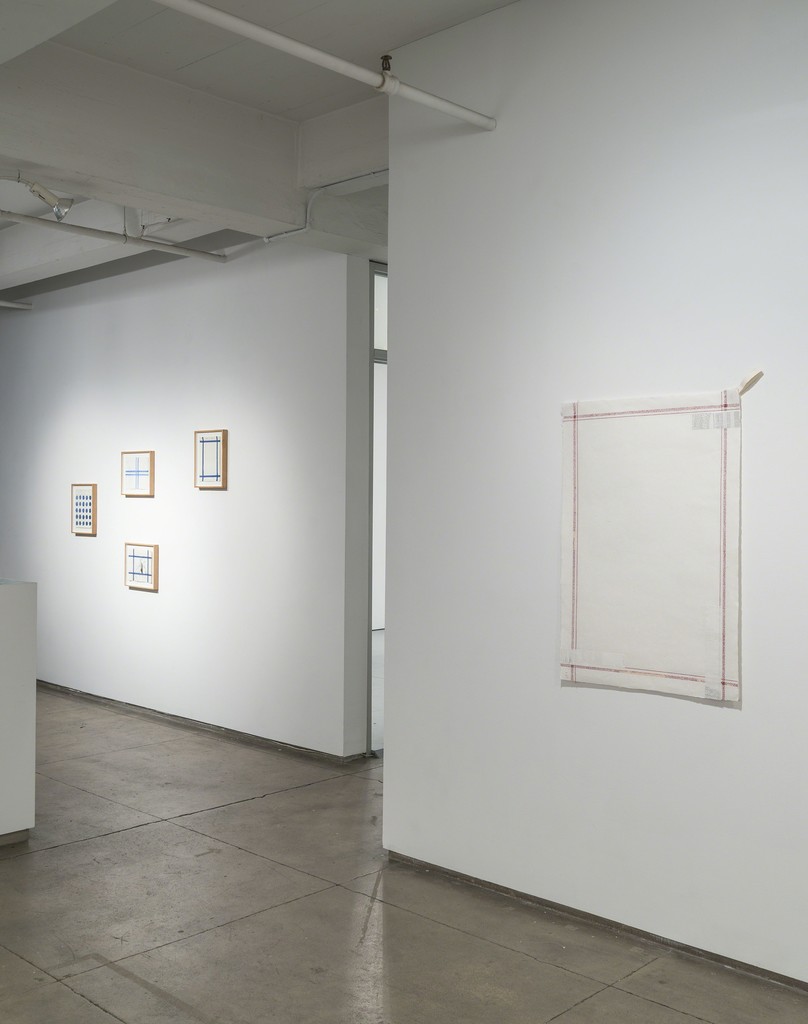 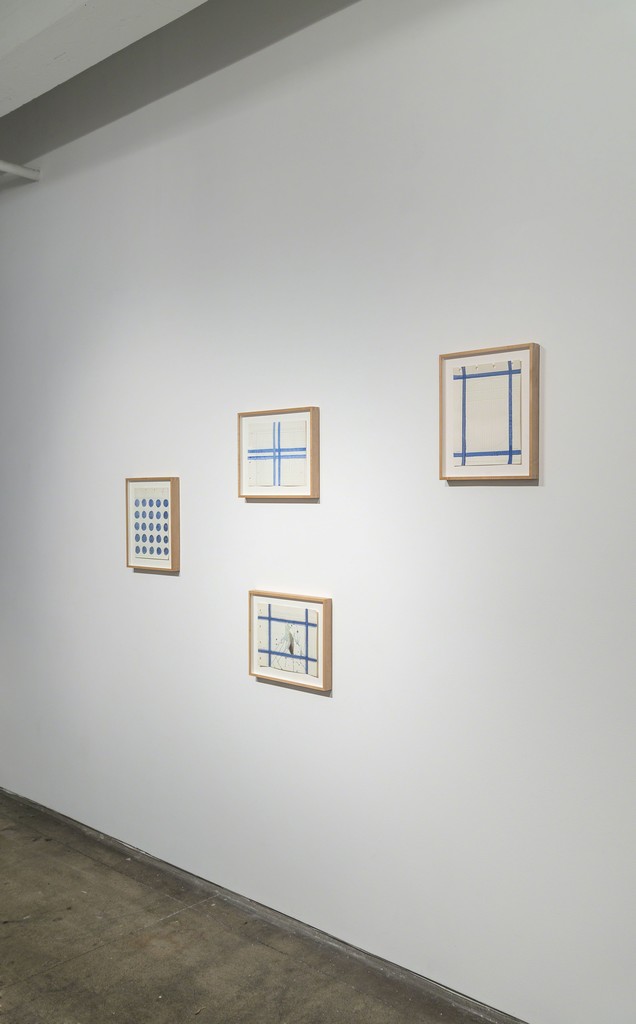 "When Elena del Rivero sews a letter she is carrying out an etymological operation, as text comes from texture and textile, hence textual. The depth of this relationship goes beyond the verbal and contaminates the whole semantic field. Thread, stretcher, loom, needle and awl. ... all have their correspondence in writing: discourse, page, study, pencil or quill." (Jose Maria Parreno).

Josée Bienvenu Gallery is pleased to announce: Letter from Home: a rendez-vous, a solo exhibition by Elena del Rivero. Born in Spain, Elena del Rivero has been based in New York since 1991. The exhibition will be on view from April 16 through May 23, 2015. This is del Rivero's first show with the gallery since 2004. The exhibition explores the recurring motif of the dishcloth throughout the past 15 years of her practice.

Elena del Rivero's work is rooted in estrangement and recollection. Studio practice and domestic life are intrinsically intertwined. Attention to detail coexists with a feeling of neglect and abandonment. Repetitive markings, words that don’t carry any meaning, and the reusing of destroyed materials are a constant in her process. Many of her aesthetic gestures are simple, even minimal, but their generative intent is expressive and autobiographical.

The title of the show, Letter from Home: a rendez-vous, with its Duchampian resonance, refers to one of del Rivero's most significant bodies of work. Over the years, she has written/drawn more than four thousand Letters, including: Letter to the Mother (1993); Letters from the Bride (1997); Unfinished Letter to a Young Daughter (1998-99). The Letters point to the social archetypes most commonly assigned to women. They "seek correspondence with an invisible audience sometimes figured as an absent mother, lover, or friend". For del Rivero, the acts of sewing, drawing, writing and repairing are equivalent. She sews the fragile remittance of meaning and turns mending into an art form.

The exhibition is centered around a giant Dishcloth made of paper that was originally created for [Swi:t] Home, one year of my life, curated by Catherine de Zegher at The Drawing Center in 2001. [Swi:t] Home, a performance-based work made at the artist's studio/home over a one year period, challenged traditional notions of drawing. It started with 20 large sheets of hand-made abaca paper, spread over the studio/home floor. The sheets shifted from room to room and as a result of being literally underfoot, showed the imprints of their movement. Watermarks, paint stains, rips and footprints were among the visual elements therefore generated.

After seven months, the sheets had taken on the texture of worked fabric, much like used dishtowels which, through time, become a tattered testament to use encoded with life spent and slowly destroyed by the process of registering it. The paper was then carefully repaired, by cleaning, patching and sewing: transformed into five giant dishcloths.

The project traveled to the Institut Valencia d’Art Modern (IVAM) in Valencia, Spain in 2006 and subsequently to The Corcoran Gallery of Art in Washington, DC, in 2008. It will be displayed unfolded, as a blanket measuring 80 x 120 inches. As a counterpart to the monumentality of the largest piece, two small dishcloths left unfinished in 2001, have been completed this year and tie the project to the present.

Moreover, four of del Rivero's most recent works in oil on primed canvas will be on view. The majestic fall of these last Dishcloths is a counterpoint to the delicate intricacy of the paper ones. The giant canvases, hanging from one nail in the corner, just like a dishcloth in a kitchen are monuments to domesticity and its monstrosity. They are painted with the traditional pattern of a European dishcloth made with stitch-like brushstrokes, followed by staining and altering the surface with dirt from the studio floor or coffee from the breakfast table.

A suite of six watercolors on ledger paper, where traditional dishcloth patterns playfully mingle with triangles and rectangles drawn with thread, use a vocabulary running through many of her paintings and drawings. The work bears the tool of its making, with the needles left over hanging from a thread. From handmade paper the size of bed linens or banquet cloths, to pocket-sized diary pages, sheet music, silver or gold embossed, paper, in many forms, has always played a major role in her work.