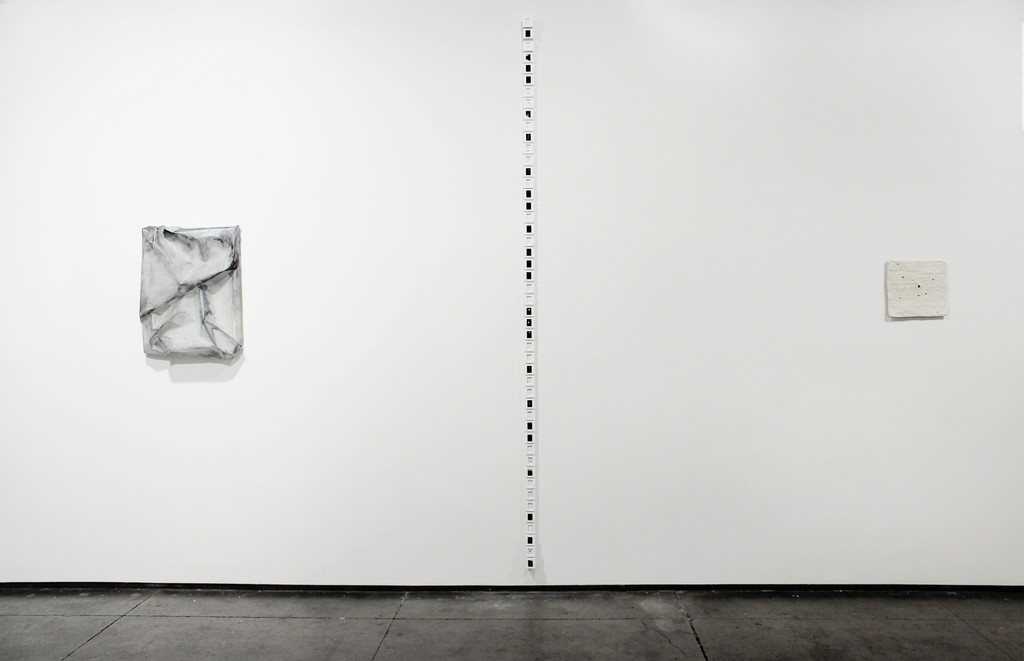 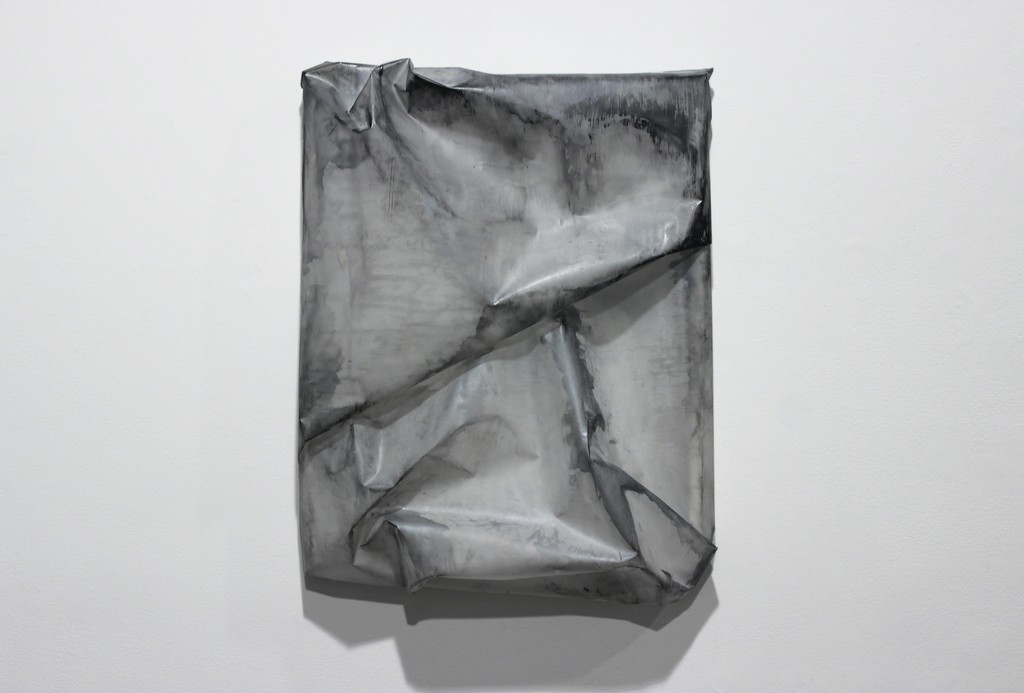 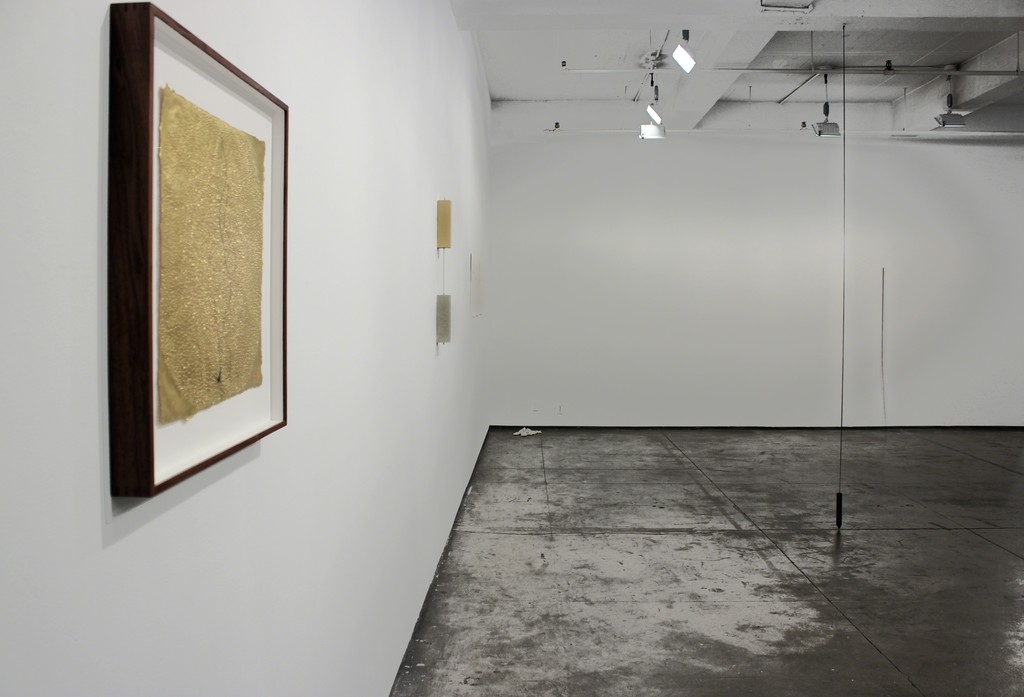 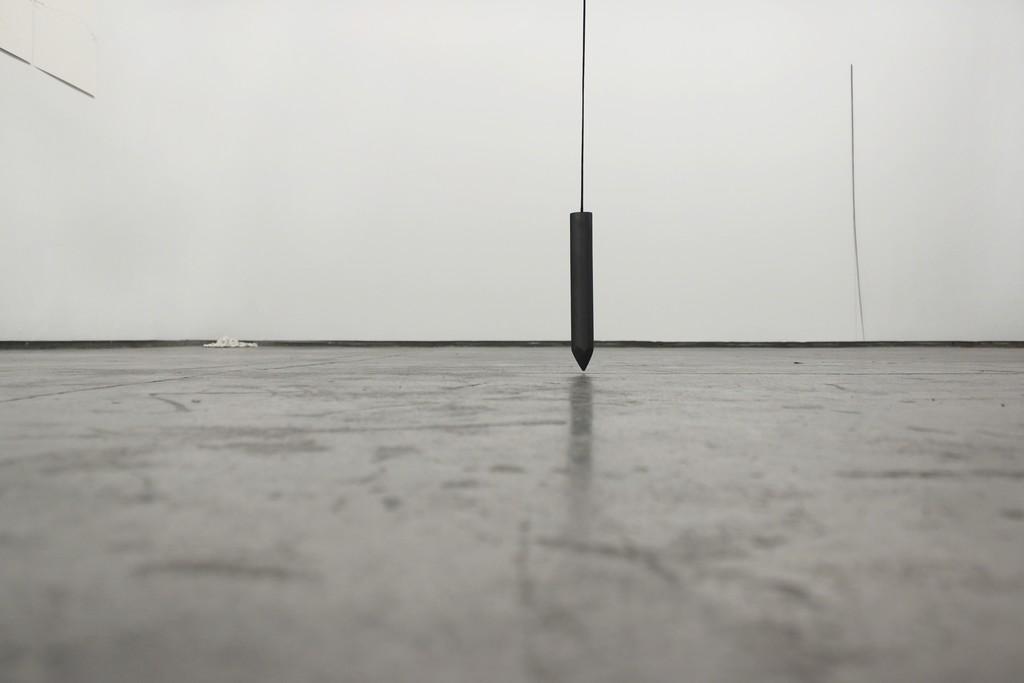 Ana Bidart’s work is concerned with the possibilities and impossibilities of drawing, in space and across time. She explores nomadic and hyperactive art forms by bringing to life found objects: the formally exquisite yet intrinsically disposable or the materially precious but casually discarded. With Disappointment she reconstitutes meaning in potential interactions between two found objects. Born in Montevideo in 1985, she lives and works in Mexico DF.

Jonathan Callan explores the relationship of disembodied knowledge to embodied experience. The books that form the footprint of Range are forever held in sedimentary layers that will never be opened. Knowledge is often thought to precipitate down through history and accumulate as the sum of many human additions, but here the plaster, like snow, sprinkles down in mountain peaks denying access to the books under the weight that covers them. Born in Manchester in 1961, he lives and works in London.

Beth Campbell creates works that challenge the notion of a physical world beyond our perception. Drawing upon philosophy, phenomenology and psychology, Campbell choreographs space, crafts uncanny objects, and maps thought. In Campbell’s installations and recent sculpture, what appears at first glance to be a facsimile of the everyday will reveal startling complexity: forms repeat and stutter, interiority is externalized and the familiar becomes strange. Born in 1971 in Illinois, she lives and works in Brooklyn, New York.

Martí Cormand's work is a testimony to the degradation of certainty. For the past two years, he has been investigating the notion of conviction by observing and rendering iconic works of the conceptual art movement "When no one has too many certitudes any more, processes become essential. I have nothing urgent to communicate, no absolute convictions. I investigate the certainties that others had in the 1960s and 1970s. My favorite subject is the study of conviction" (Martí Cormand). Born in Spain in 1970, he lives and works in Brooklyn, NY.

Elena del Rivero’s works are rooted in estrangement and recollection. Work and daily routine often intermingle in her oeuvre to become one. In most of del Rivero's work, delicacy and a sense of loving attention coexist with a feeling of neglect and abandonment. In Wound, a hint to Fontana's Concetto Spaziale, the punctured 24k gold leafed paper surface, bears the tool of its making with a needle and a thread, left over hanging in the center of the work. Born in Valencia, Spain in 1949, she has been living in New York for the last 30 years.

Marco Maggi's drawings and sculptures encode the world. Composed of linear patterns that suggest circuit boards, aerial views of impossible cities, genetic engineering or nervous systems, his drawings are a thesaurus of the infinitesimal and the undecipherable. Marco Maggi's abstract language refers to the way information is processed in a global era. Marco Maggi divides the act of drawing. Born in Montevideo in 1957, he lives and works in New York and will represent Uruguay at The 56th International Art Exhibition - La Biennale di Venezia this year.

Distillation of time and obliteration of information characterize Stefana McClure’s drawings and sculptures. All of her work involves translation, transposition and reconstruction as music is changed into text, and text is turned into image. The Planets (op. 32), is a spectacular symphonic suite scored for large orchestral forces and a wordless chorus, written by Gustav Holst between 1914 and 1916. The 192 page score has been sliced and rejoined as continuous lengths of paper yarn and each of the seven movements have been knitted back together again. McClure unveils and reveals the visual fabric of The Planets (op. 32): drawings to a symphonic suite by Gustav Holst as she translates and transposes the synesthetic structure that connects music and image. Born in Lisburn, Northern Ireland, she lives and works in New York.

Lauren Seiden’s work explores the essential elements of process and materiality through an intuitive and intimate layering of graphite, breaking down the surface and transforming the paper into a physical, textural and structural form, further expanding upon the notion of drawing as painting and painting as sculpture. The act of folding strengthens the structure while weakening the surface allowing for necessary manipulation of the material in order to maintain stability. These dualities of strength and fragility are encapsulated within a process that, like the work itself, strikes a balance between the internal and external. Born in 1981, she lives and works in New York.

Sergío Sister's work stands at the edge between painting and sculpture. The Ripas, ladrillos, pontaletes appropriate the names of the manufactured products from which they are derived. Sergío Sister's work relates to the US tradition of minimalism and to the Neo-Concrete movement of the 1960's in Brazil. Many bridges can be drawn between Sister's attempts to incorporate three-dimensional space and Mira Schendel's Sarrafos or Willys de Castro's Objectos Activos. Made of wooden beams dressed in canvas, Sisters ladrillos investigate surface and depth through subtle color dislocations. Born in São Paulo in 1948, he lives and works in São Paulo.

For more than a decade, John Sparagana has been working with found magazine images as his primary material. His work has developed into a full-fledged investigation into the way information is presented and disseminated visually within contemporary culture. Born in 1958 in Rochester, New York, he lives and works in Houston and Chicago.

With lightness and gravity, Julianne Swartz places equal importance upon negative space, ambient sound, interruptions of sculptural line, and the interface between outside and inside. Her work encourages a quizzical reconsideration of our relationship to our body, to each other and to our surroundings. Lean, a steel rod defies reason as it leans towards a wall but doesn’t touch it, pushing the limits of physical gravity very literally, while exploring gravity metaphorically, in reference to the limitations, fragility and endurance of the body, and the weight of human relationships. Born in Phoenix, AZ in 1967, she lives and works in Kingston, New York.