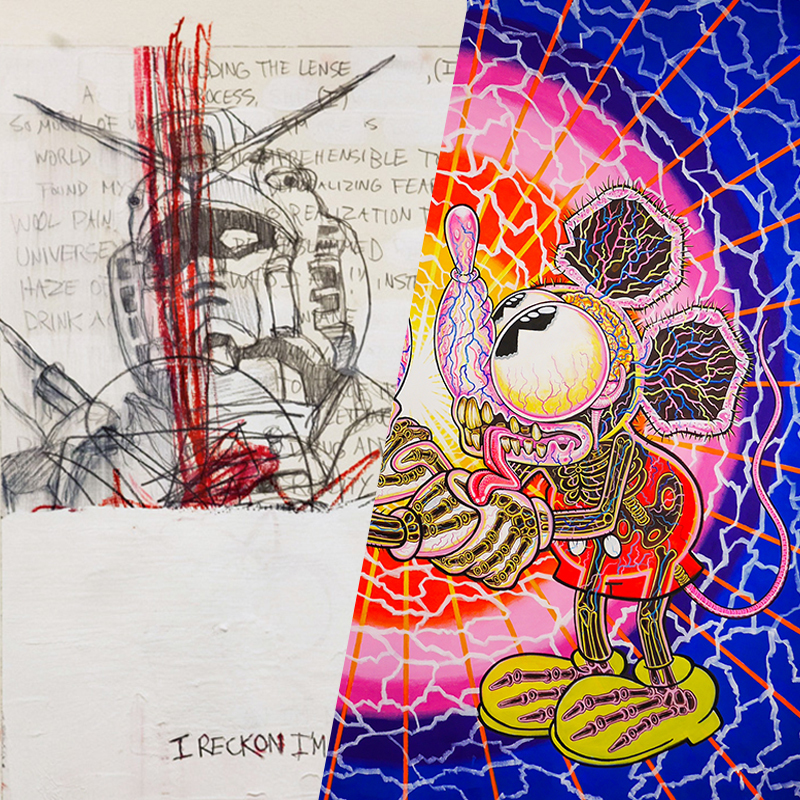 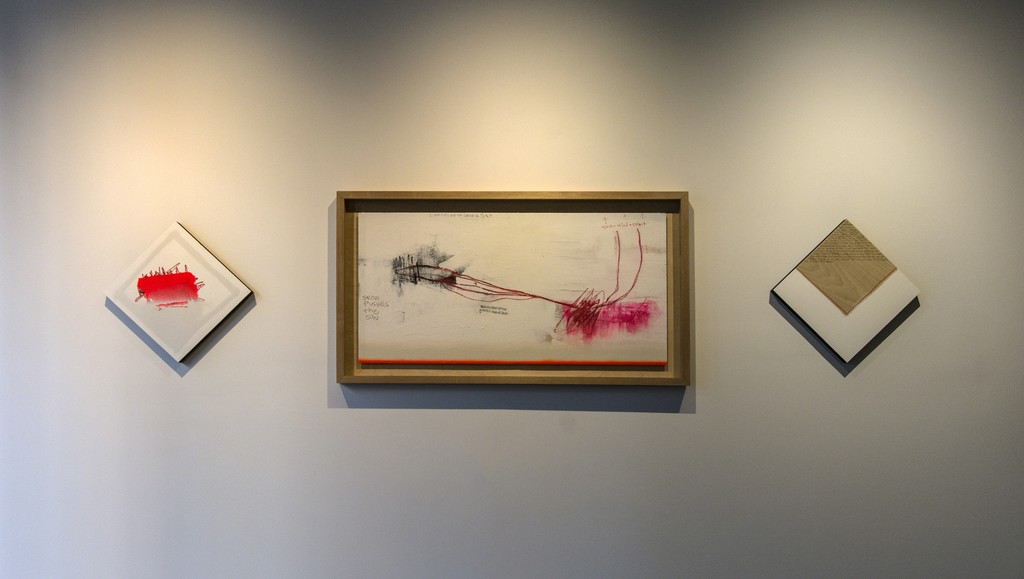 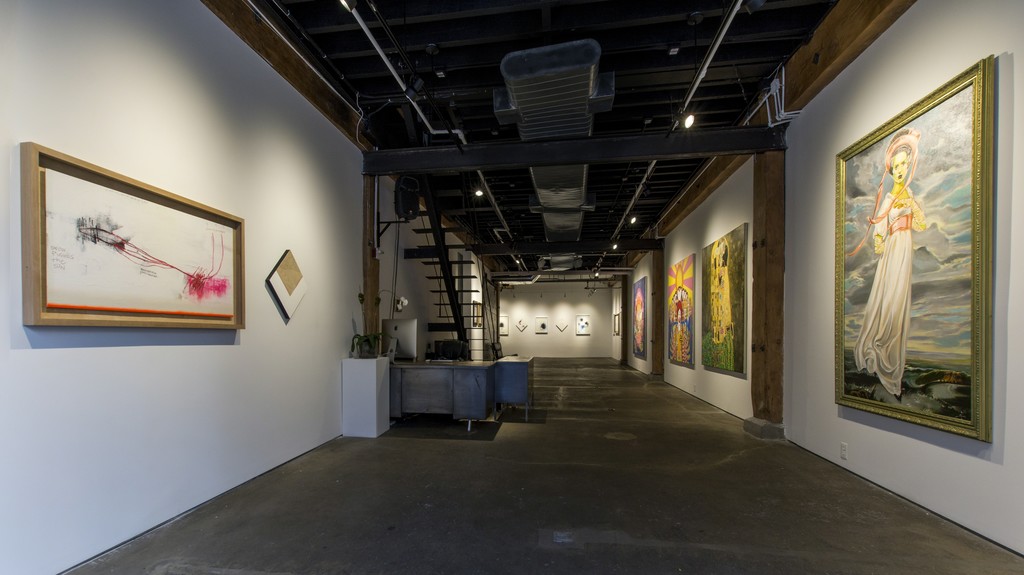 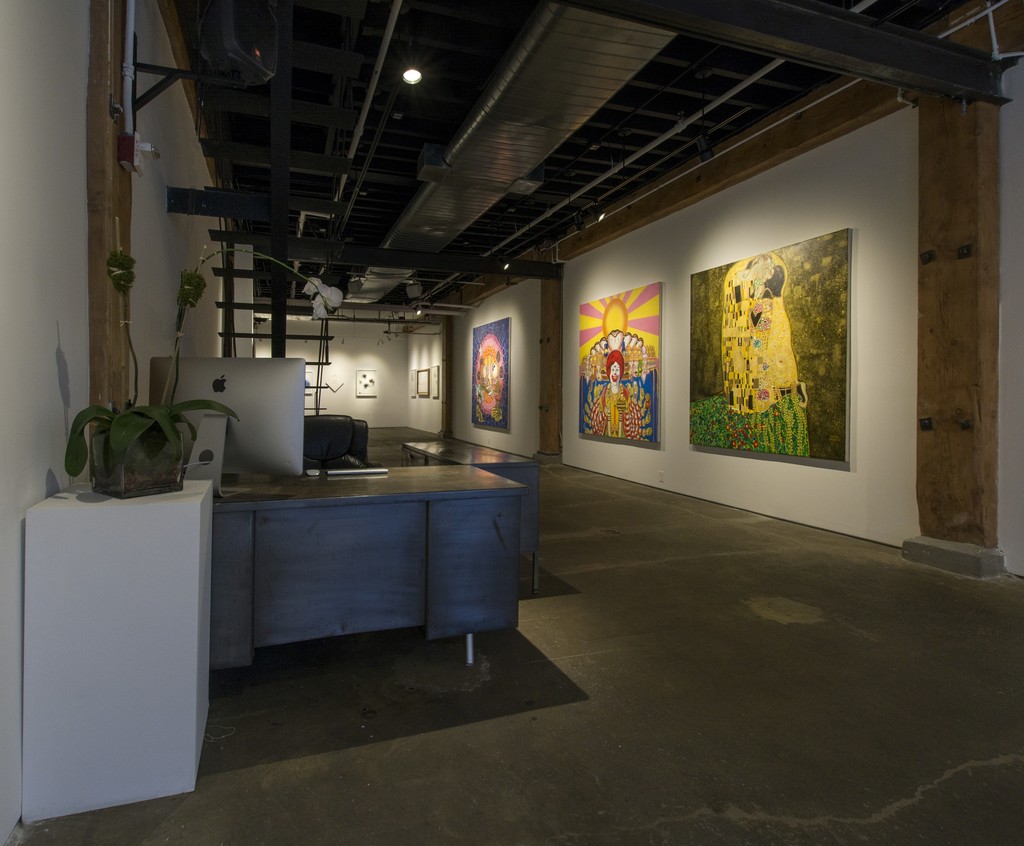 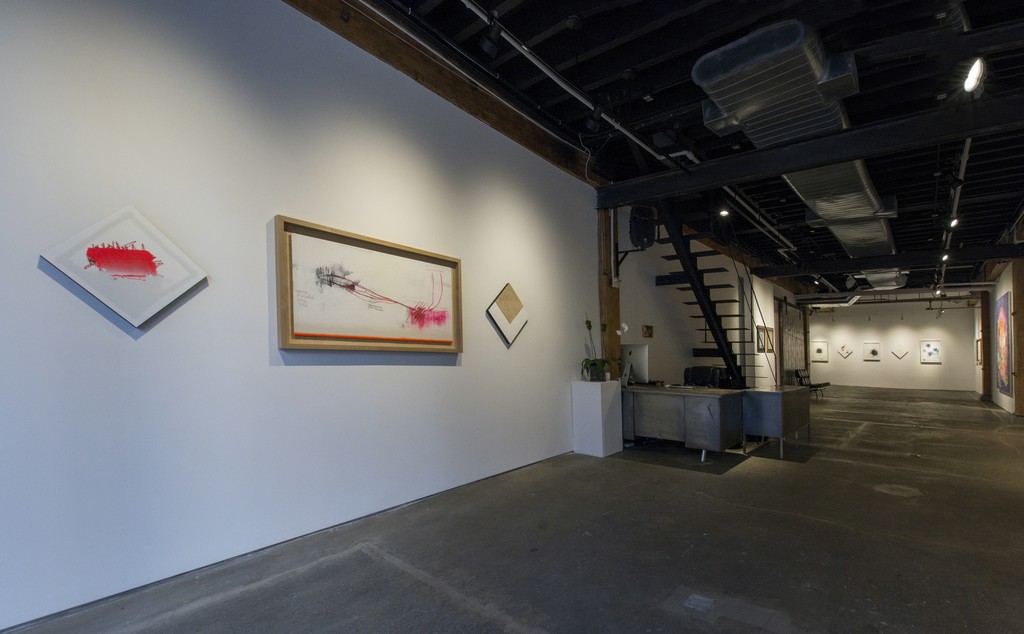 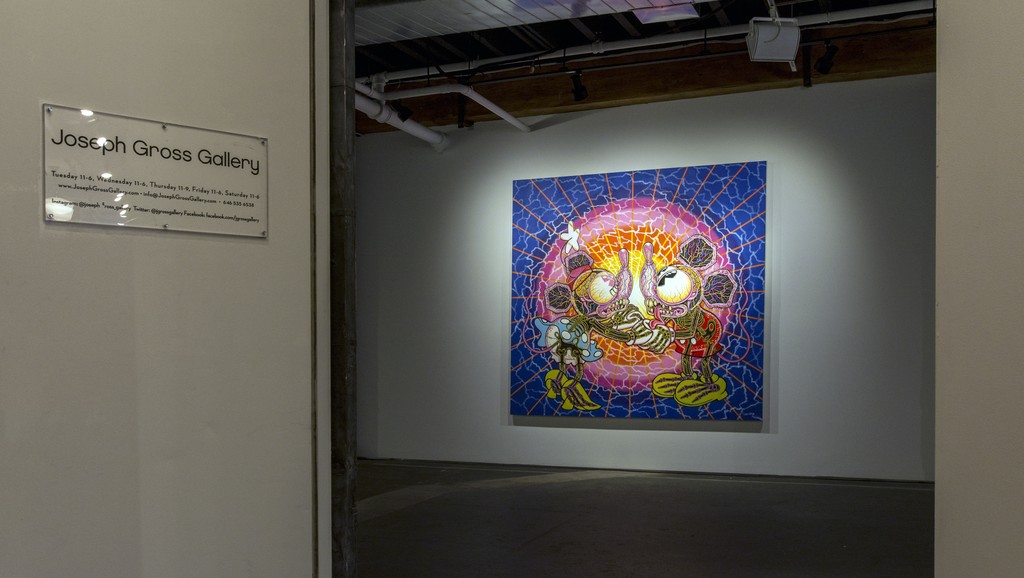 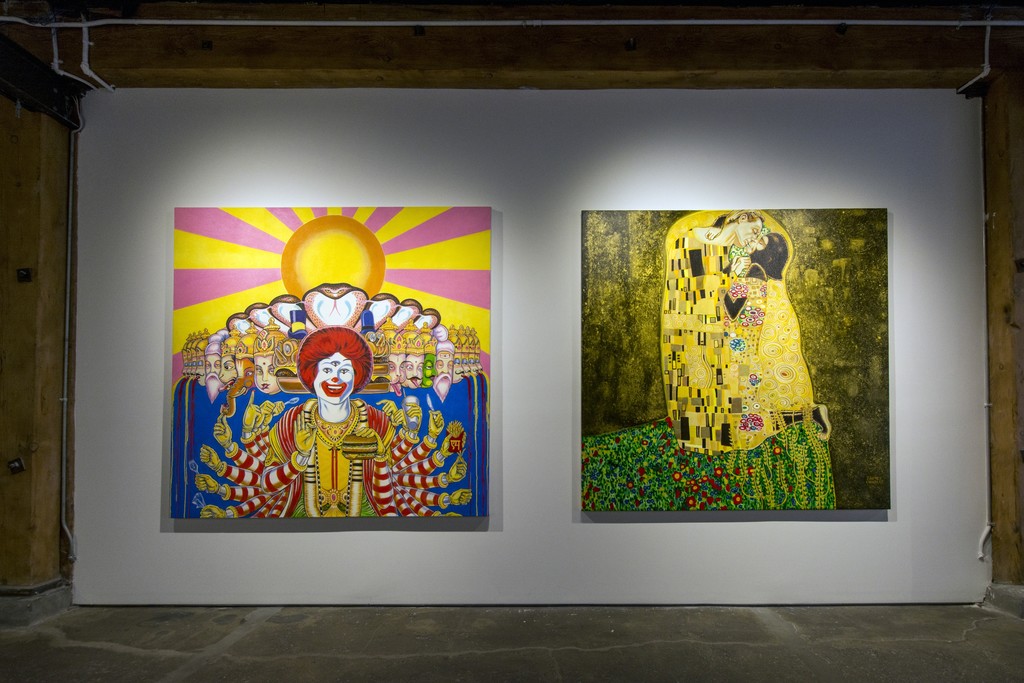 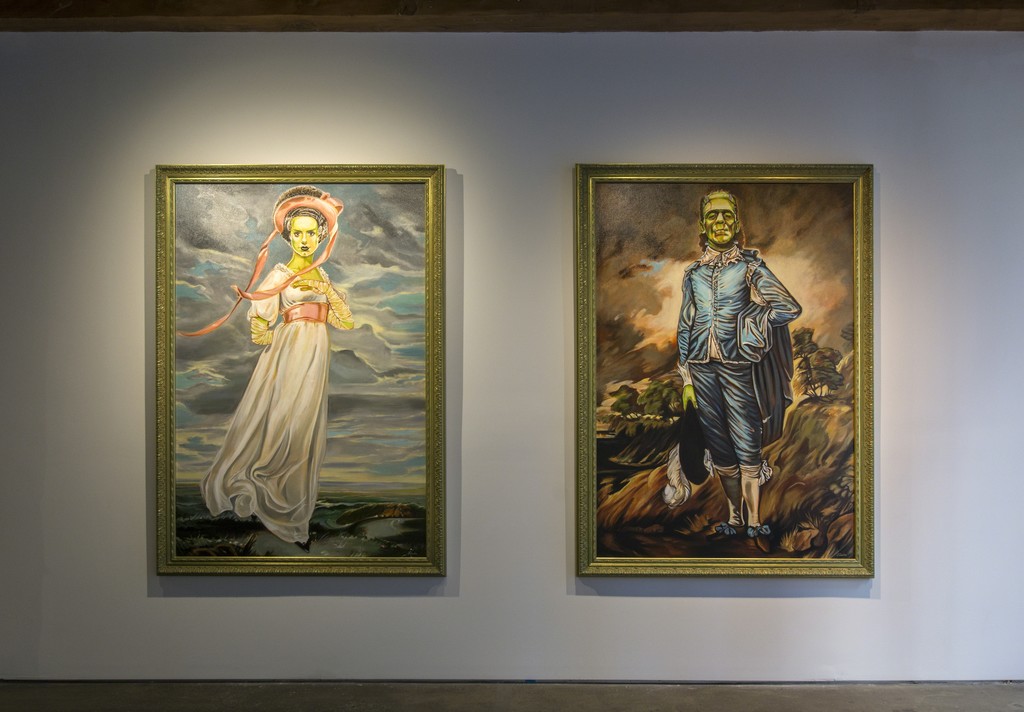 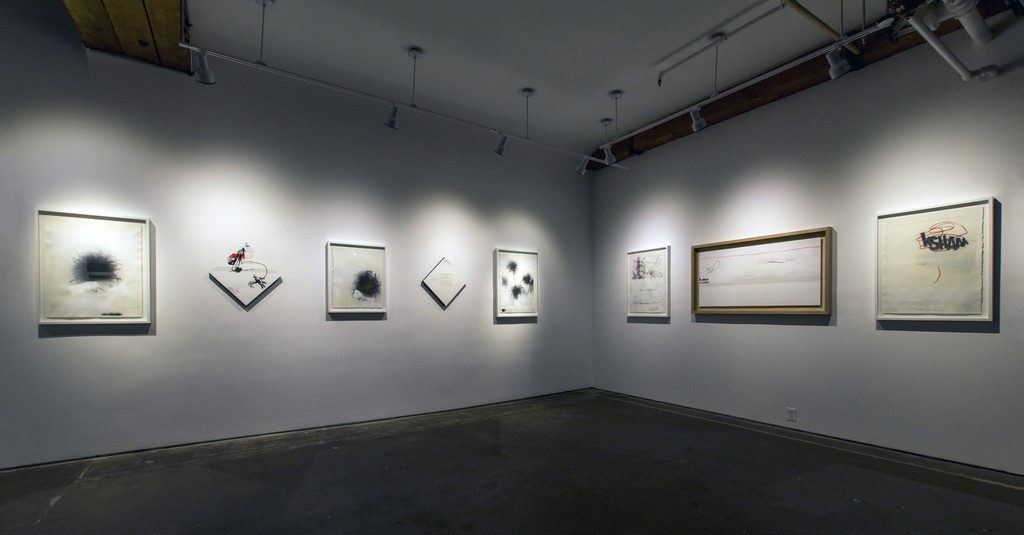 Joseph Gross Gallery is pleased to present Monstro Eyegasmica, a
solo exhibition of new paintings by James Charles. Charles is well known in the San Francisco Bay Area for his
colorful statements on consumer culture. He will début a series of large scale vibrant paintings inspired by pop
culture, alongside his signature detailed work on banknotes.
548 W 28th St.) on November 5th, 2015 from 6:00-8:00 p.m.
Gross Gallery (
The opening reception will be held at Joseph
Monstro Eyegasmica is a
of vivid, large mixed media paintings in
which the artist
are at once
familiar and unsettling. Charles’ brand-jamming artwork irreverently combines pop culture characters with
traditional iconography and embodies a sarcastic sense of humor.
His fluorescent painting
Axis Bold as
McLove is based on the image on the album cover of Axis: Bold As Love, released by The Jimi Hendrix
Experience in 1967. Charles’ painting updates the image by replacing Hendrix with Ronald McDonald holding
an array of fast food items. This unapologetic image of a fast food mascot alongside a God is an explicit
critique of the commercialization of contemporary society.
culmination of James Charles’ new series
combines illustration, painting, and collage-style composition to create works that
Monstro Eyegasmica will feature new additions to Charles’ ongoing Bank Note Project as well, for which he
first gained notoriety in 2010. In this ongoing series, presidents and historical figures on bills are replaced
seamlessly with pop icons such as Mr. T, Yoda, and Spock. These small works have a broad impact: by
transforming these bills, Charles puts a wrench in the recirculation process and declares that these bills are no-
longer currency, but art. His political gesture is a playful one.
About the Artist
James Charles (born in Seattle, Washington,1963) is a mixed media artist based in San Francisco, CA. He
graduated from the San Francisco Art Institute in 1990 and received the prestigious Sobel Memorial
Scholarship in Printmaking. Charles has shown at various galleries across the United States, as well as
internationally. He has worked with many renowned fine artists and also as a commercial sculptor, creating toy
prototypes for the likes of Disney, Mattel, and Hasbro. One of the founding members of the Oyster Pirate
Collaborative Workshop, James Charles now works and resides in San Francisco.

Joseph Gross Gallery is pleased to present From Here, an exhibition of
new works by Oakland, CA based artist John Felix Arnold III. This is Arnold’s first solo show with Joseph Gross
Gallery. The gallery will host a reception for the artist on November 5th at 548 W. 28th St. from 6 to 8 p.m.
From Here is a turning point in Arnold’s career. These stark pieces define themselves sharply against Arnold’s
previously maximalist, densely detailed work in painting, collage, print, sculpture, and installation. This time
around, Arnold is working by subtraction, by paring down. Utilizing twelve mixed-media pieces on wood panels
and paper, he’s created a series that builds off of his earlier style by the process of effacement; a release of
past convention necessary to regeneration.
Arnold is working within and simultaneously against his trademarks. The process of creating these works was
purifying, even ritualistic. Many pieces remain rooted in an older style of painting, but done-over in white paint,
the ghosts of letterforms, panels from Akira, and giant robots linger in the background behind raw, red pastels
and scribbled automatic writing. Others are dustbunny-like voids, black holes in the psyche that seem to tunnel
themselves out of their frames.
The divergence in Arnold’s recent work is a direct outcome of intense personal growth for the artist. Created
quickly in a two-month period, these smaller, more controlled pieces offer a sense of loss and isolation, but
also that of trajectory and possibility. A departure from his past work exploring a post-apocalyptic vision
between the organic and the mechanic, the recollection of a childhood framed by comic books, action films,
anime and Ukiyo-e imagery, From Here addresses an interior world beyond that specific set of references,
creating an entirely new kind of painting for the artist alongside his fresh worldview.
 This mature new collection illustrates the depths of his artistic process, the painful cavities of uncertainty and
 self-consciousness. Ultimately, his instinct towards devastation is overridden by the more deeply rooted instinct
 to survive and evolve.