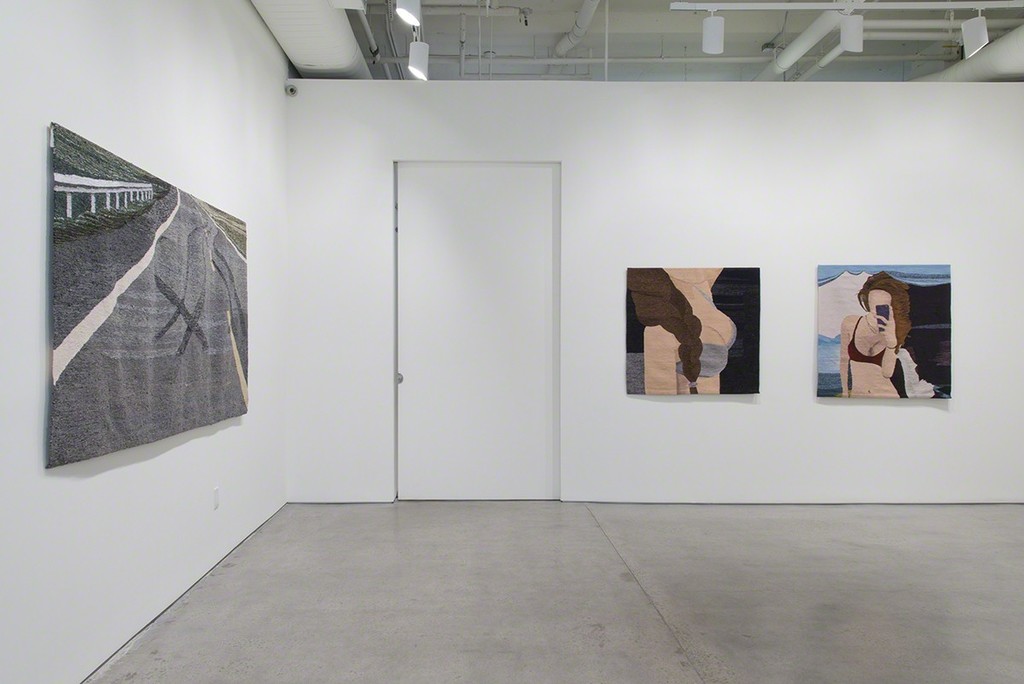 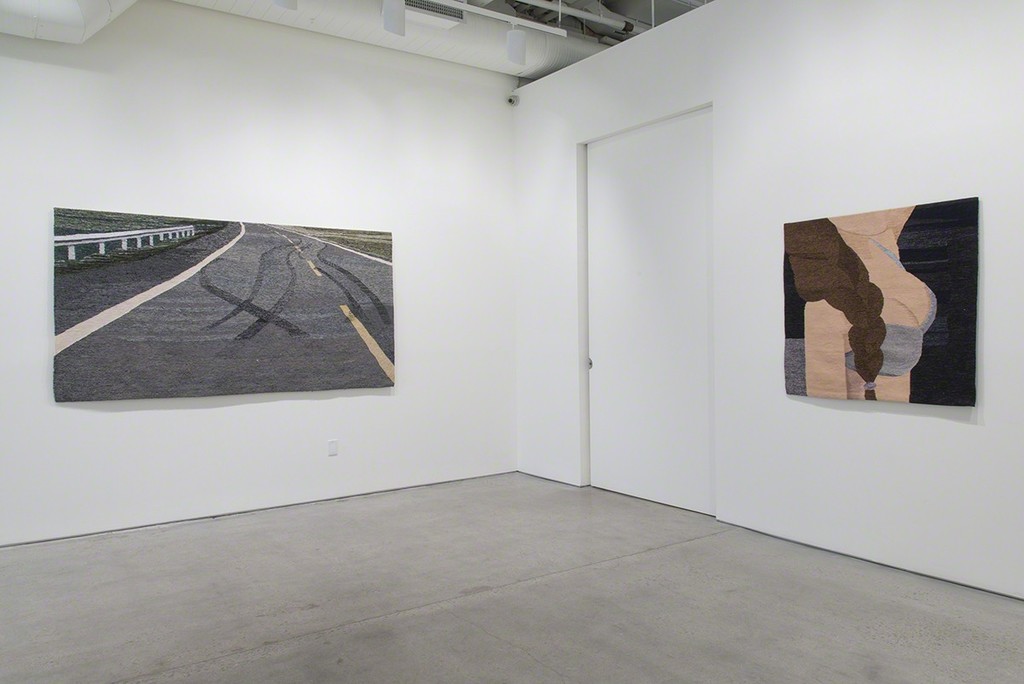 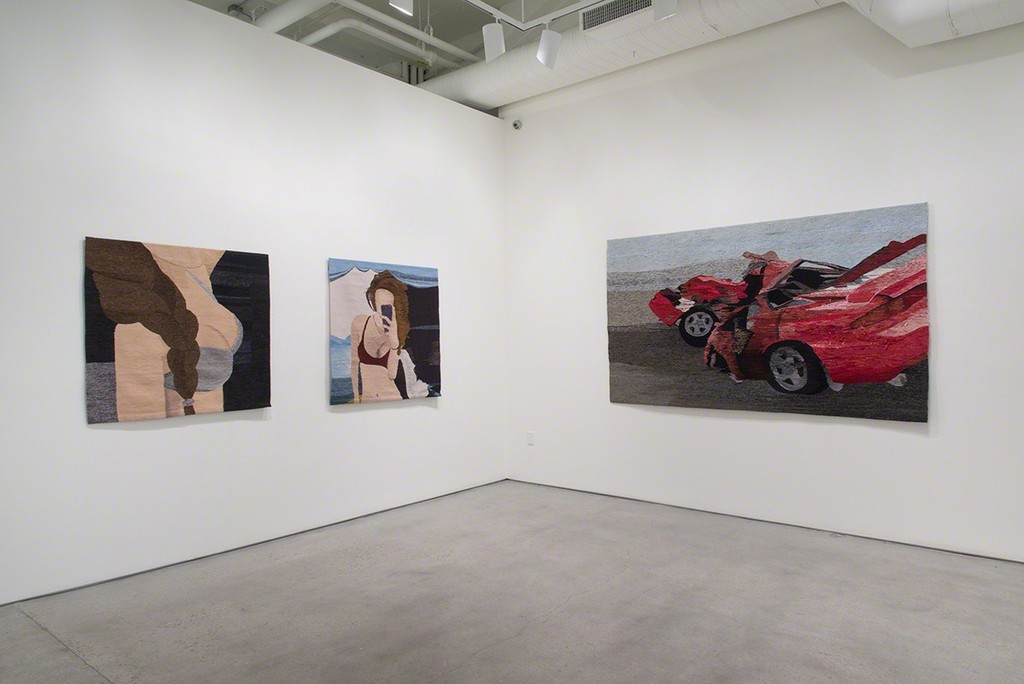 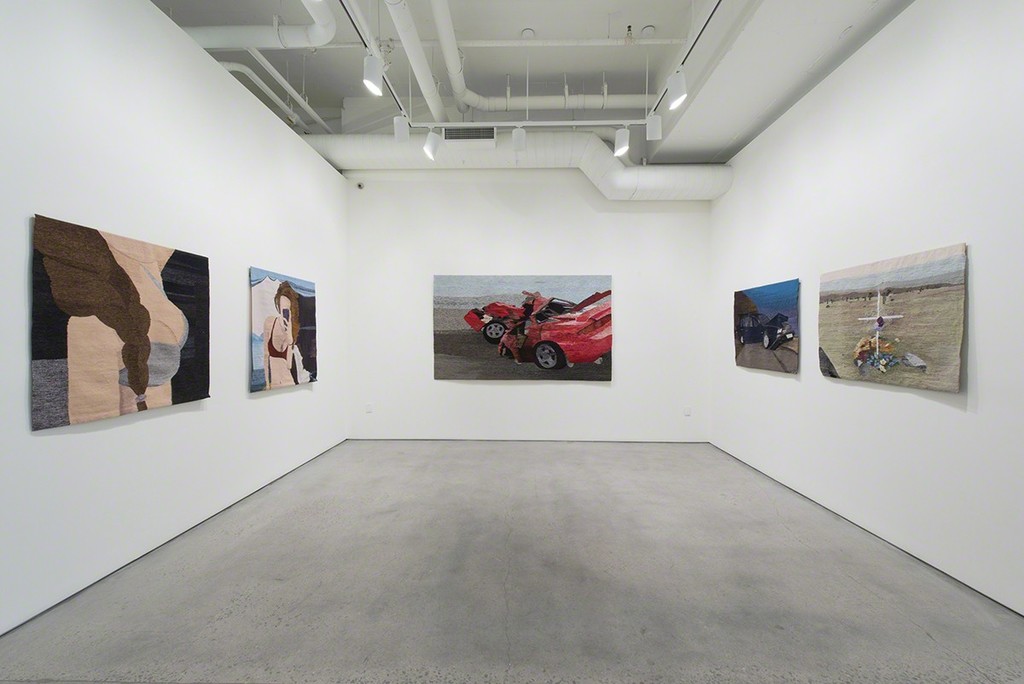 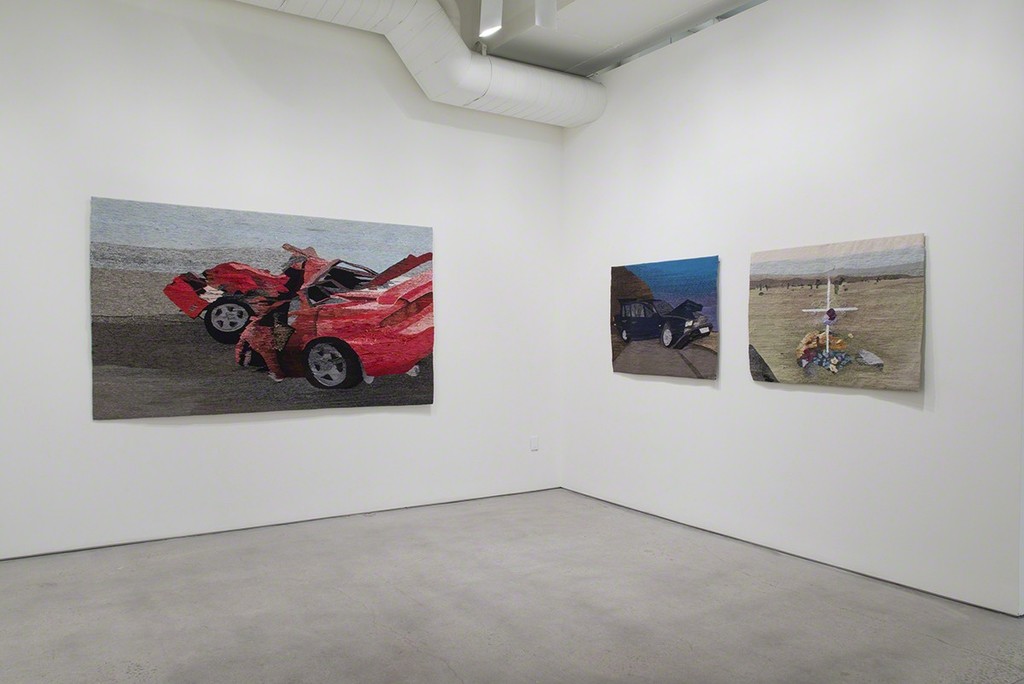 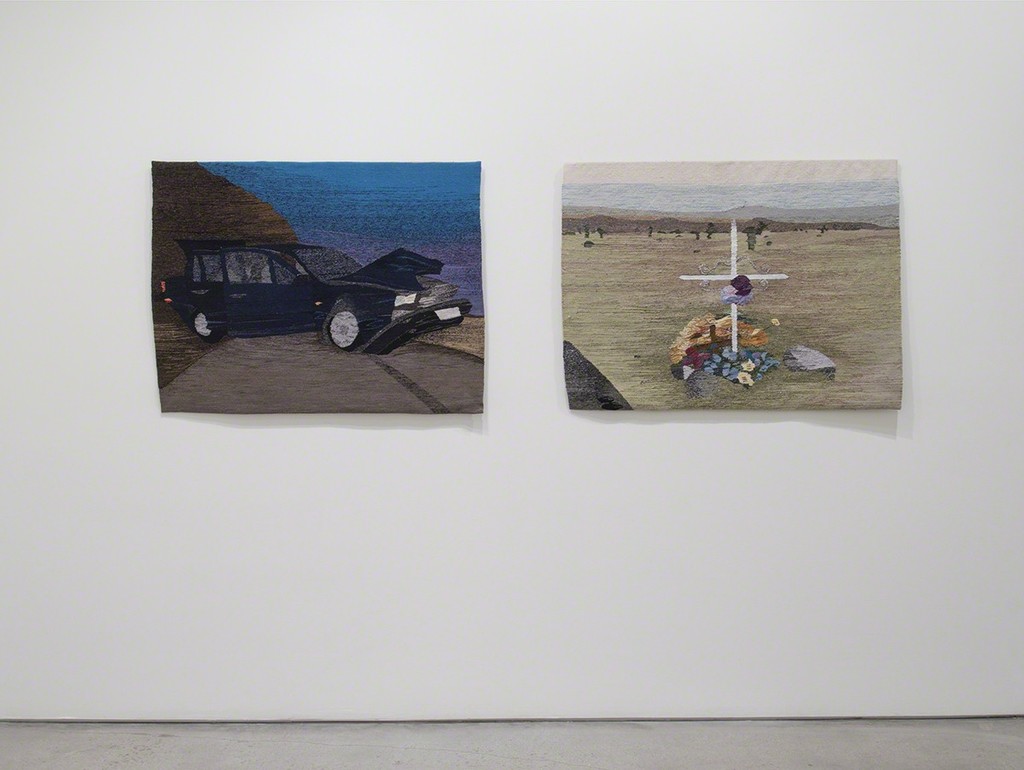 Joshua Liner Gallery presents Darkness Lies Ahead, a solo exhibition of new handwoven tapestries by Brooklyn-based artist Erin M. Riley. This will be the artist’s first exhibition with the gallery and will display the largest work from the artist to date, with tapestries over eight feet wide. The artist will be in attendance for the opening reception on Thursday, May 7, 2015.

When considering tapestries and textile arts, images of pastoral landscapes and decorative designs come to mind. Erin M. Riley sources contemporary imagery from the Internet, exploring the millennial fascination for young women and self-portrait photography, colloquially referred to as “selfies.” Riley explains, “I grew up on the Internet, so for me nudity is very normal… I happened upon a Twitter account that was nothing but images of a girl in her underwear in the bathroom mirror. I was fascinated by the way my generation was searching to connect and remind each other that we exist moment by moment.” Riley’s Nudes 24 depicts a young woman in a fleeting instant capturing an image of her mirrored body with an iPhone. The selfie discloses a fraction of the woman’s external identity and serves as a reminder of the human need to exist and connect. The artist elaborates, “So much of our interactions as young people are spent online. The selfie for me was a reminder that we are flesh.”

Early on in her career, Riley received criticism that her work is purely voyeuristic and misogynistic. In an attempt to quell these misconceptions, the artist delved further into her investigation by introducing her own self-portraits. Riley began taking portraits of herself and contacting old boyfriends for photographs she’d sent them while they were together, amassing a supply of imagery of her own body to explore. “In a way, I was allowing [a woman’s] vulnerable moments to stand in for mine so I finally decided to use my body as well… it proved that I was committed and that I was just like these girls,” explains Riley.

In contrast to the intimate nude pieces, Riley explores scenes of car accidents and highways with off-road veering skid marks. Collectively known as The History Pieces, the artist notes, “[These works] explore the residue of trauma, the scars that we all have from death, life, and the moments in between.” History 35 reveals a brightly-lit road, the darkness of the night ahead. Swerving tire marks abruptly interrupt the mid-ground, metaphorically signifying the bumps and bruises of life, relationships, and the trauma that accompanies it. Riley further explains, “I am attracted to the skid marks particularly because they are temporary, eventually disappearing… for me, so much of my interactions with men have been turning points, either adding or taking away from my well-being.” The laborious, time-consuming process of weaving allows a chance for meditation and contemplation. The artist reflects on this time as a sort of catharsis.

Using a Macomber floor loom, the time spent weaving each piece can take between forty and eighty hours, depending on size. The yarn for Riley’s work is sourced from various discontinued mills around the country. Before a single thread is woven, the artist will wash, strip, and hand dye every string herself. Riley avoids examining her work until its completion, moving directly to the next piece––preventing her from focusing on mistakes within the work and the subsequent disappointment. The artist explains, “Working every single day on a piece, you only see the things you wish you could change. It’s nice to be able to step back and just see it for what it is.” The very nature of the artist's medium makes it nearly impossible to unravel, much like any regret in life––you cannot ask for a do-over. Riley’s dedication to her craft is both analytical and curative, despite the provocative and disastrous nature of the imagery.