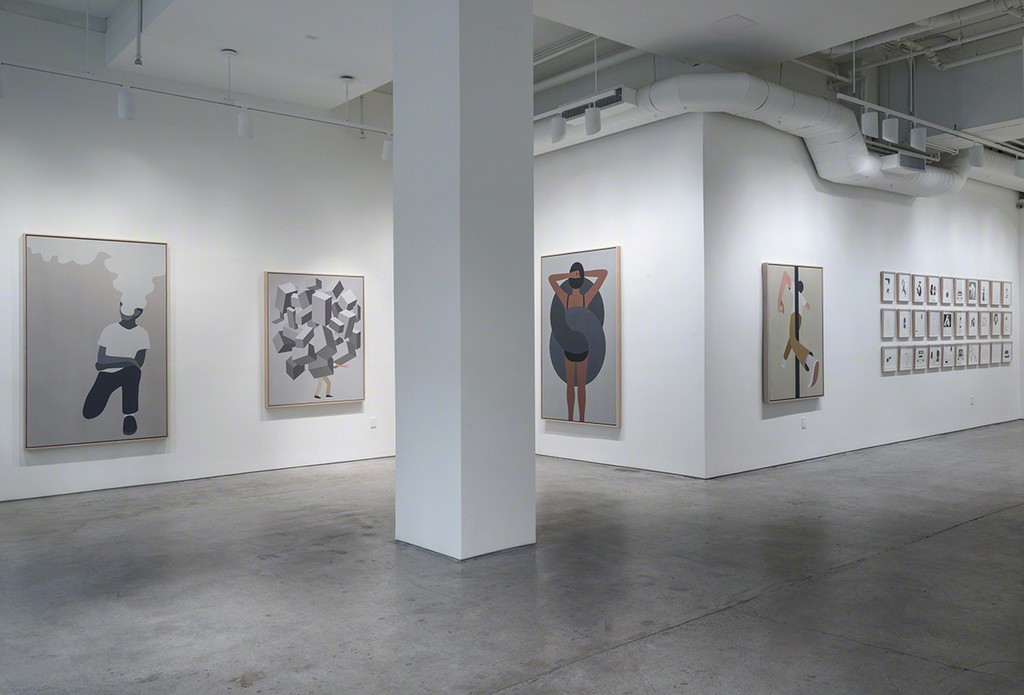 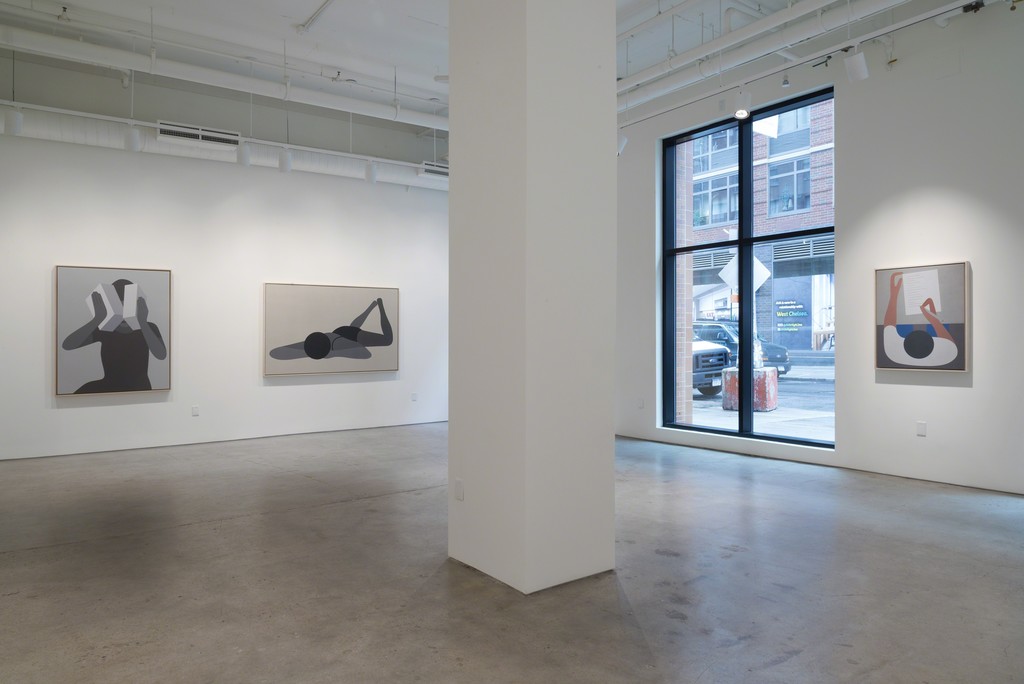 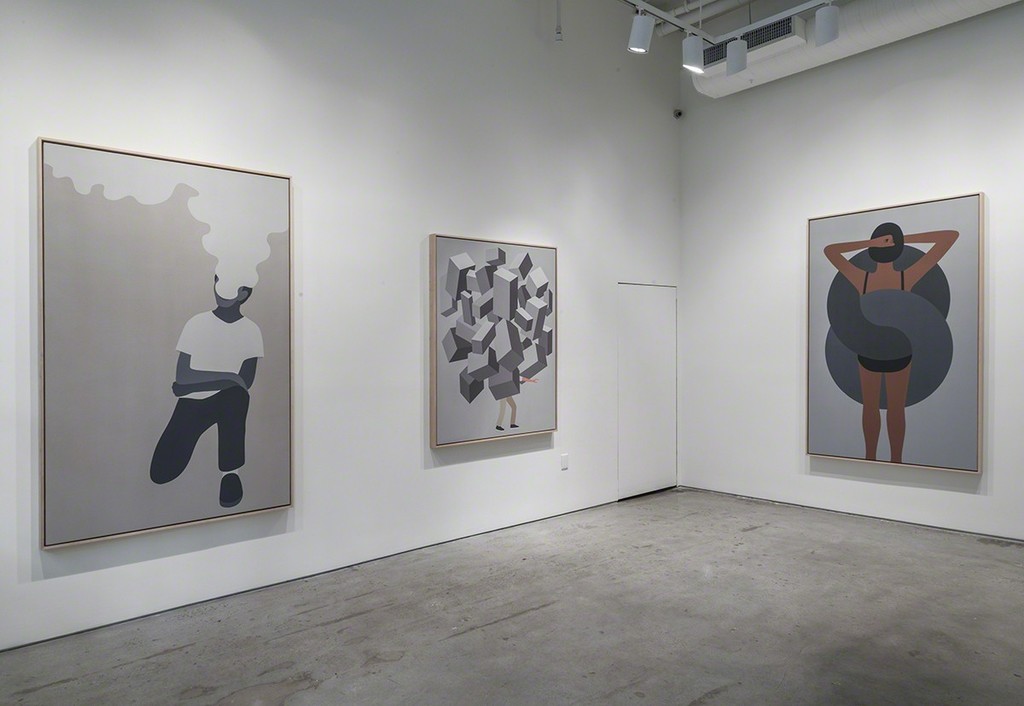 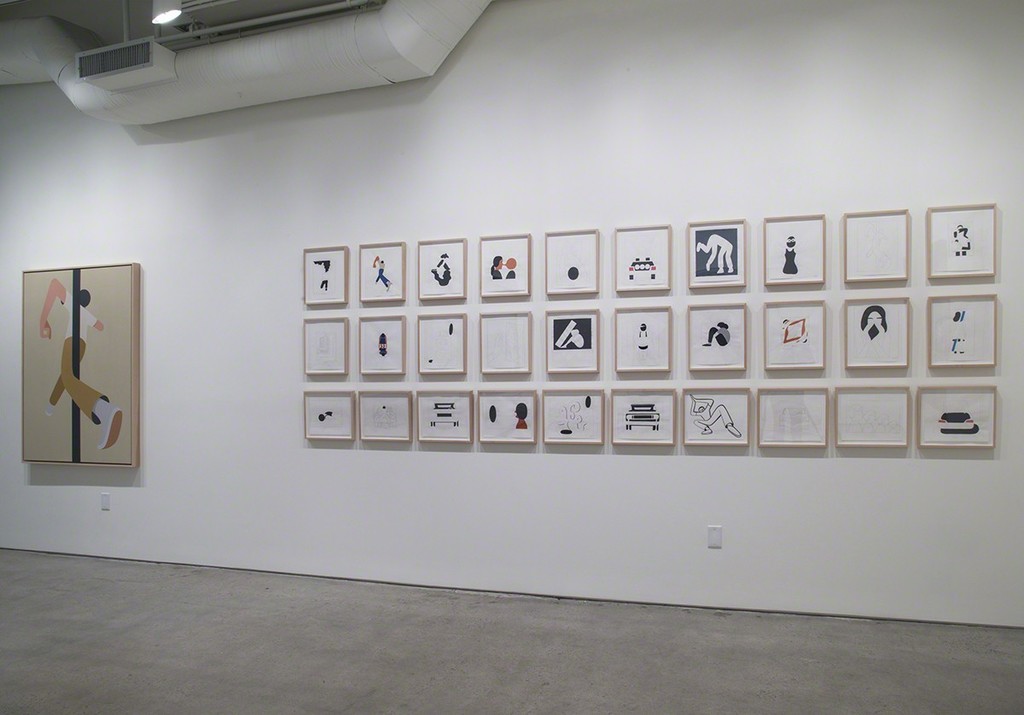 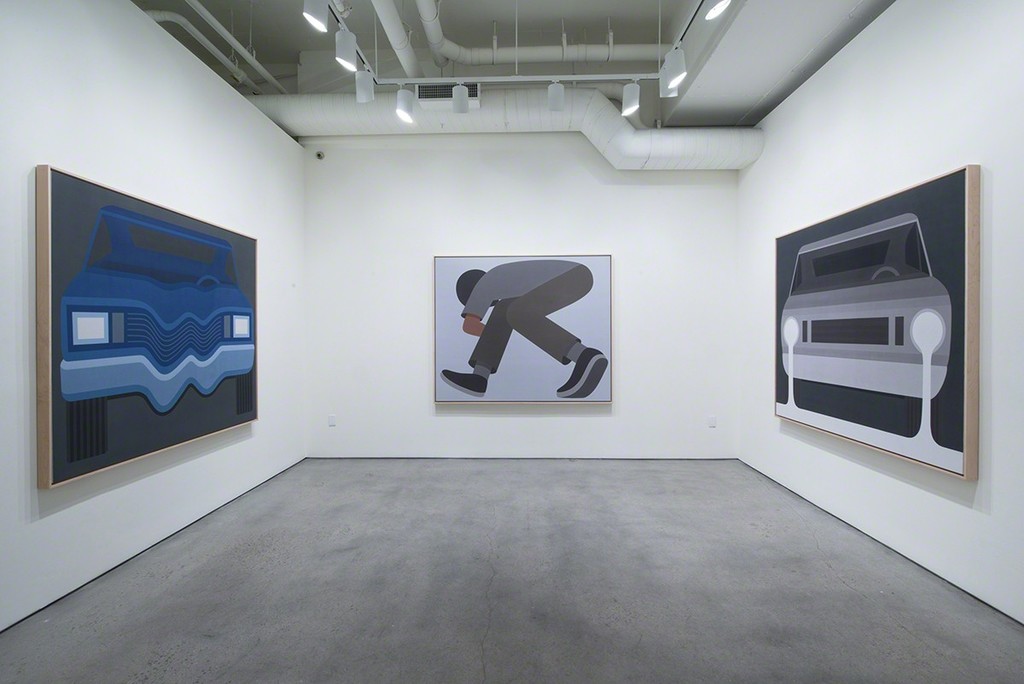 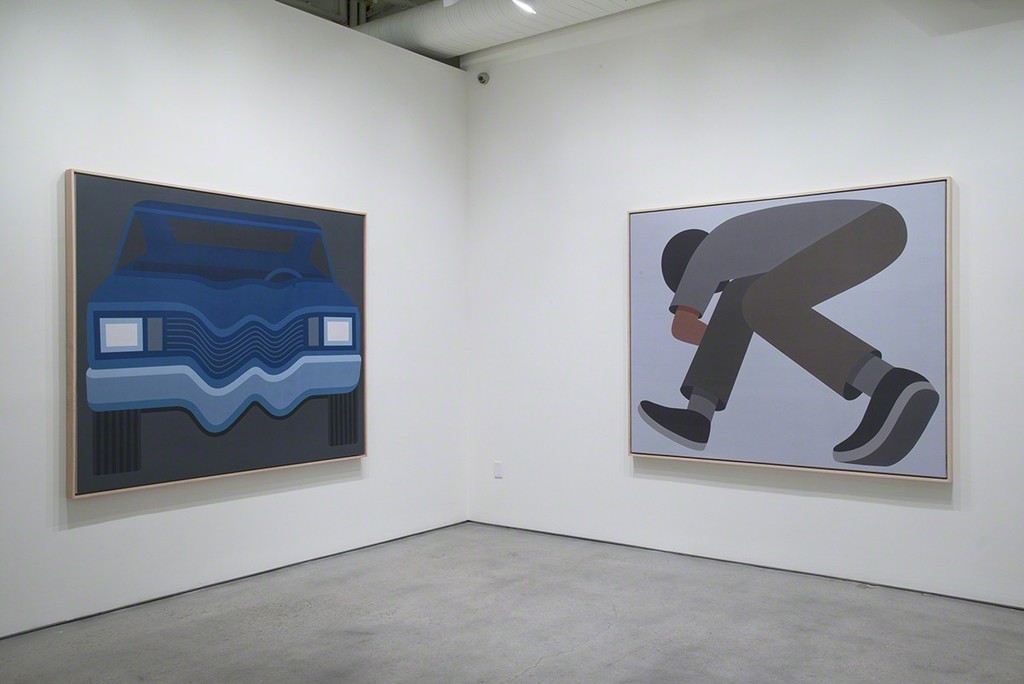 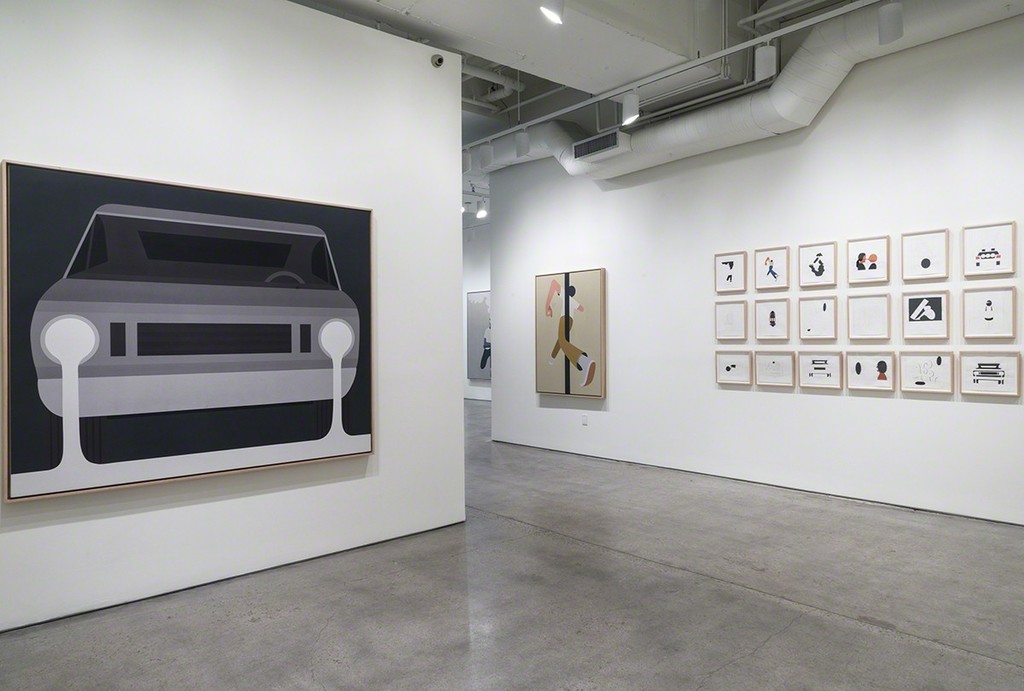 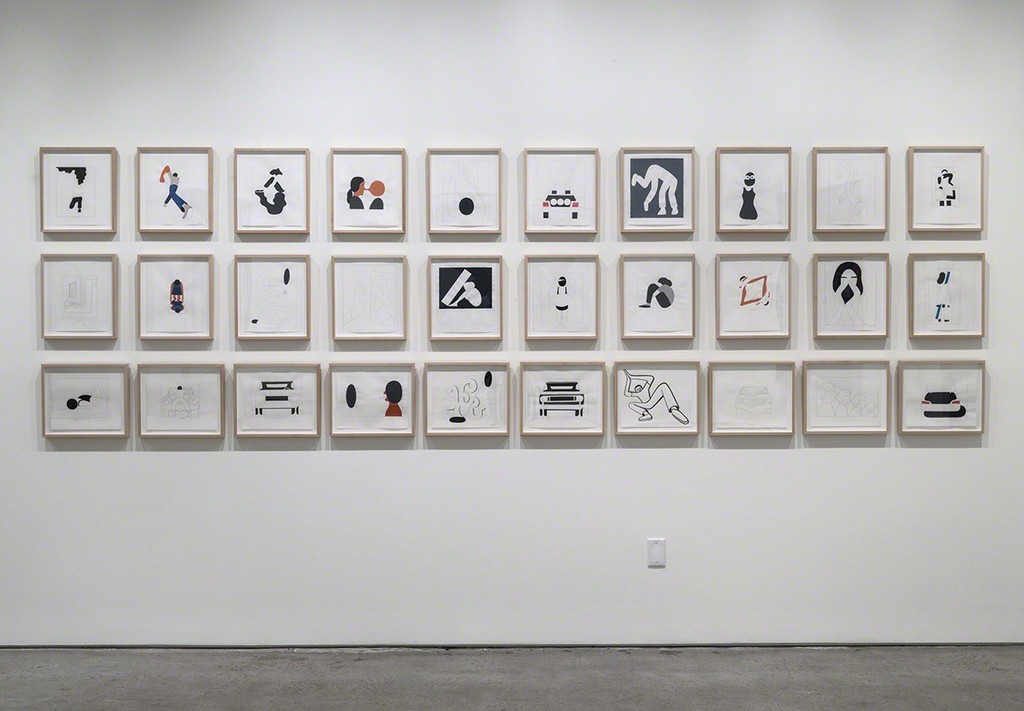 Joshua Liner Gallery presents It Looks Like It Says, a solo exhibition of new work from Los Angeles-based artist and graphic designer Geoff McFetridge. This is McFetridge’s first solo exhibition with the gallery, and will include ten works on canvas, and numerous smaller works on paper. The artist will be present for an opening reception on Thursday, September 10, 2015.

Involved in an abundance of creative and commercial projects ranging from murals to animations, textile and wallpaper design to sculpture, ceramics, painting, and work on paper, McFetridge’s signature style—rooted in simplistic imagery playing with smooth lines, matte colors, and perspective—is at the forefront of every project the artist undertakes.

Despite their simplistic, uncomplicated aesthetic, McFetridge’s works rendered in acrylic on canvas and paper are developed from a systematic process of repeatedly sketching and refining imagery, both in pencil on paper and the computer. The artist explains, “The process involved in making [these paintings] is that of drawing and redrawing an image until only the most essential pieces are left.” The Beach Seen Through Limo Tint portrays a woman lying down with a perfect circle for a head, a smooth stripe for the strap of a bathing suit and soft contoured limbs separated by variation in tone for perspective. Like pieces to a jigsaw, the shapes fit together to form cutout-like imagery that is rudimentary yet striking in its simplicity. McFetridge adds, “The paintings are done in a process of putting pieces together, like a puzzle. Until the last color is put down none of the colors make sense.”

In addition to multiple sketches and studies on paper, the artist will often scan drawings to a computer, repeating the process and selecting precise colors for each composition. McFetridge elaborates, “Often I scan the drawings and work on them on the computer. I then trace the computer drawing by hand and start to add color on the paper… The colors are what hold the paintings together. The canvases have a very consistent surface, and simple imagery so color is vital.” In one work on canvas, a simple silhouette of a figure dressing is depicted in a mere three colors. A sky blue background surrounds a stark white tank top, with flesh-toned blocks and stripes for torso and arms, connected to two smooth prongs for a hand. Viewed separately, these shapes, reduced to their simplest forms appear abstract, and fall apart. The artist poetically explains, “Often the sensation of painting the last color on a painting is one of plugging in the vacuum cleaner, the painting comes to life; noisy and vibrating.”

Aside from the practice of sketching and refining, McFetridge calls on memory, imagination, and an ability to visualize the subject, rarely using physical references. A new motif emerging in the artist’s paintings are cars: “I have never painted cars before… I now draw them in the same way I draw anything: without reference. They are an amalgamation of cars real and imagined.” Pulling from past memories growing up in Canada in the 1970s and 80s, and present life living in Los Angeles, McFetridge notes “Cars are an essential element to life in Los Angeles, and the suburbs I grew up in in Calgary.”

Other works rely entirely on imagination and the artist’s visual vernacular to describe intangible notions as seen in the works Soundlessness and A Weird State. The artist notes, “For me, even as a four year old drawing was a way to tell myself stories, or to make something exist, not to record or translate something from the real world… the paintings are a catalog of my experience growing up and living in the West, and most importantly a language I am most fluent in.”

Born in 1971 in Calgary, Alberta, Canada, Geoff McFetridge received his BFA from the Alberta College of Art and his MFA from the California Institute of the Arts. A respected graphic designer, McFetridge’s design studio Champion Graphics has done title designs for Spike Jonze and Sophia Coppola, shoes for Nike, carpets, wallpaper and blankets for the Standard Hotel, created ceramics for Heath Pottery, Snowboards for Burton and Salomon, a line of shirts for UNIQLO, and logos and campaigns for Patagonia. McFetridge was a part of the Beautiful Losers show that traveled globally, as well as Art in the Streets at MOCA Los Angeles. The artist has been awarded three public mural commissions including the Crenshaw/LAX Transit Project (Florence/Hindry Station), the City of Ottawa Light Rail Transit (Lyon Station), and the City of Huntington Beach large-scale mural for the entrance to the Pacific City development. Selected solo exhibitions include Meditalucination, V1 Gallery, Copenhagen, Denmark, 2014; Around Us and Between Us, Ivory & Black, London, United Kingdom, 2012; The Westest, Half Gallery, New York, 2010; and In the Mind Seattle, Art Museum Olympic Sculpture Park Pavilion, Seattle, 2008.