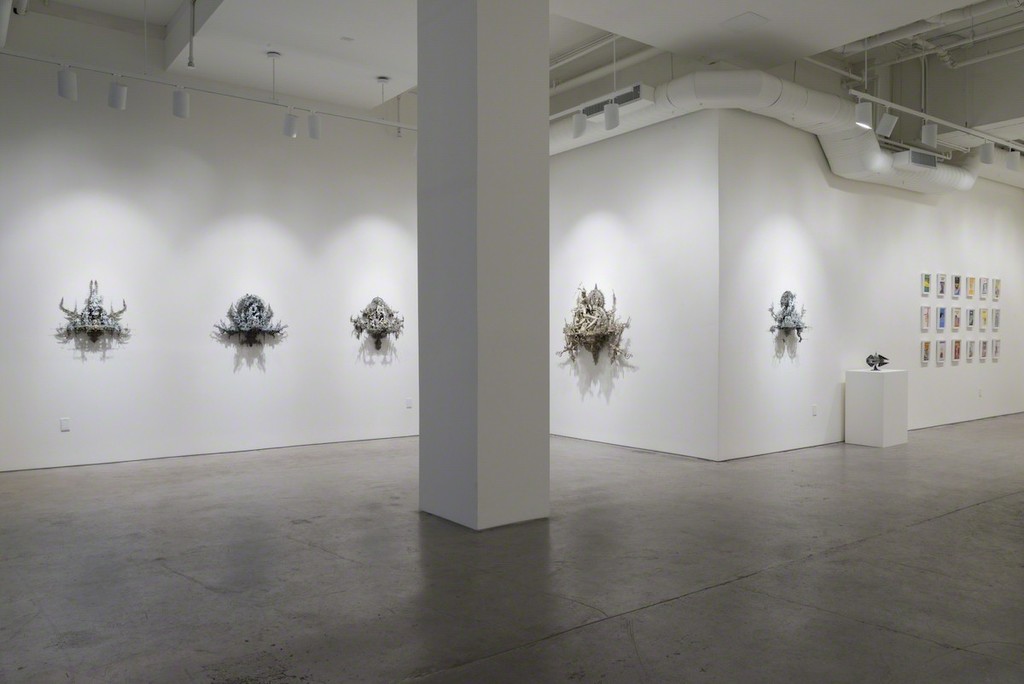 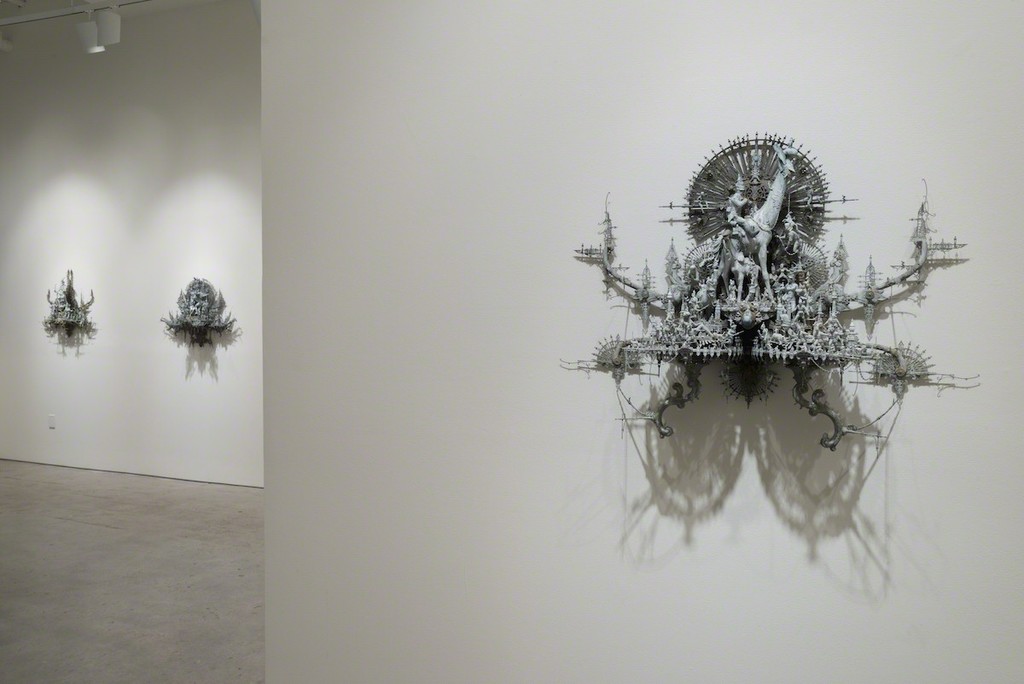 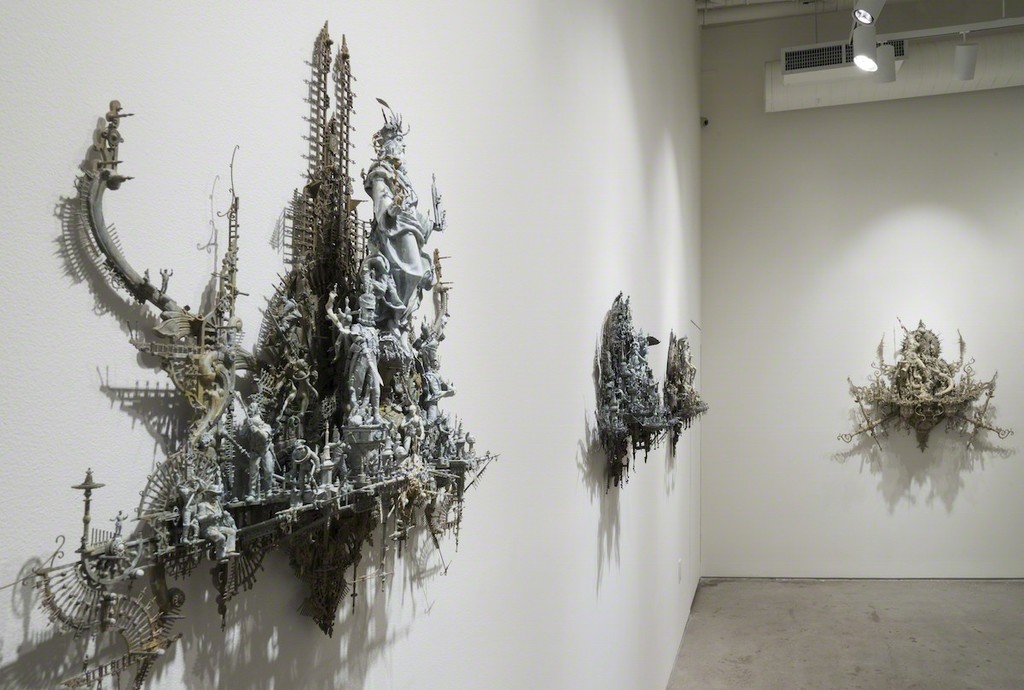 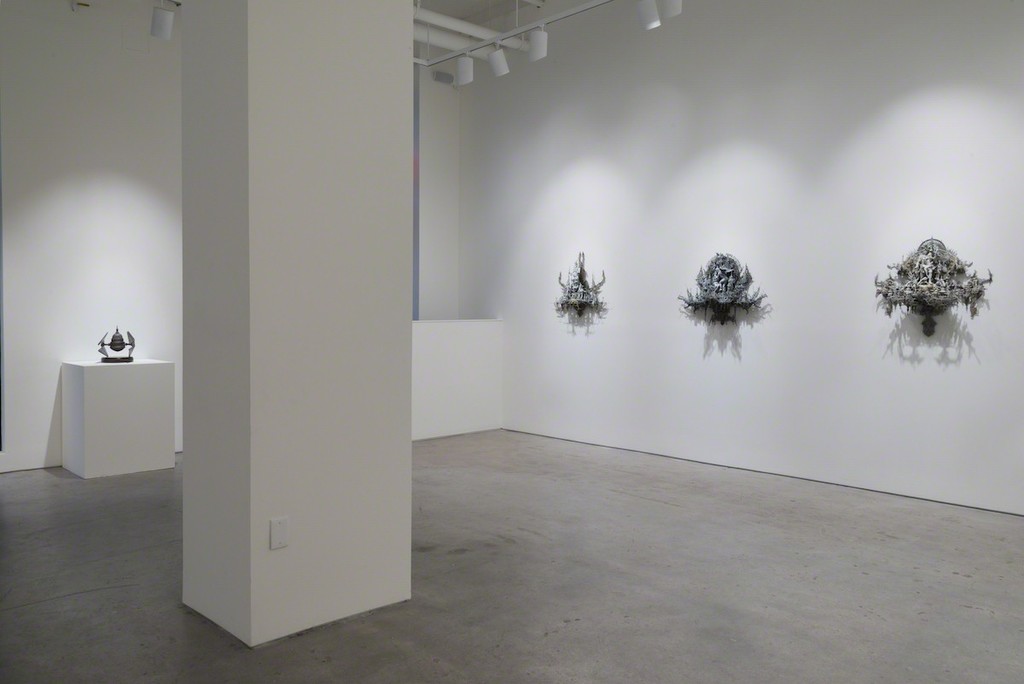 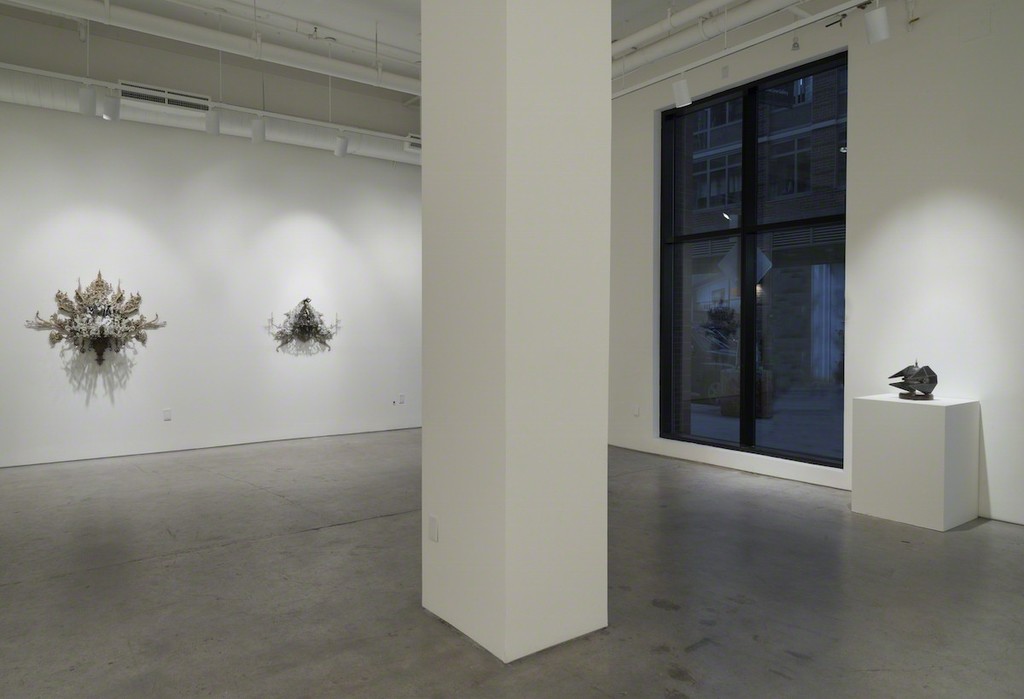 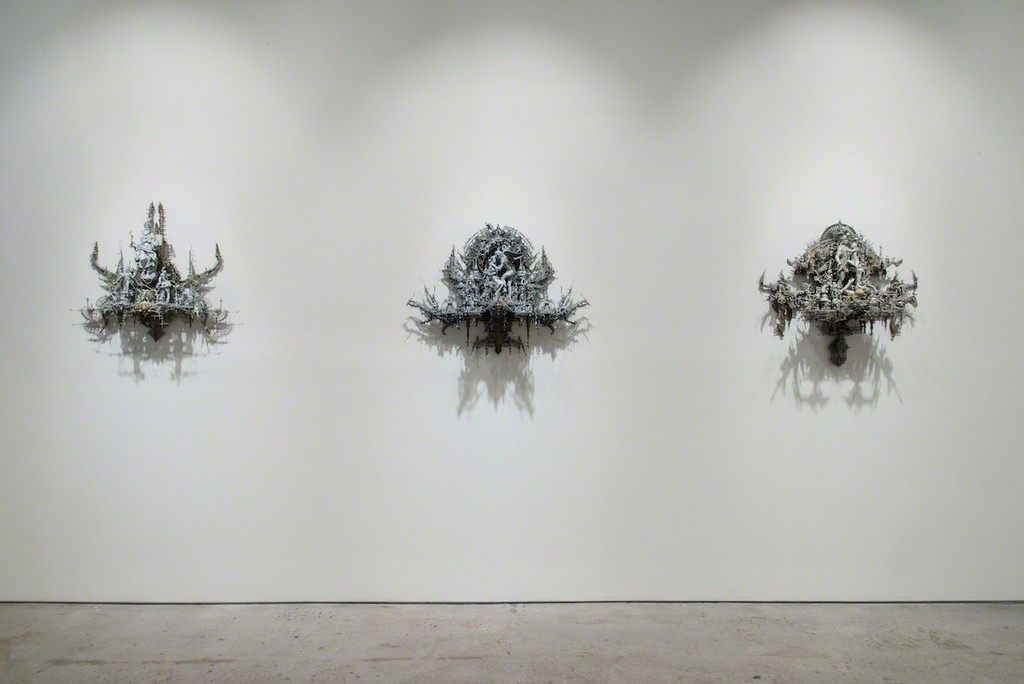 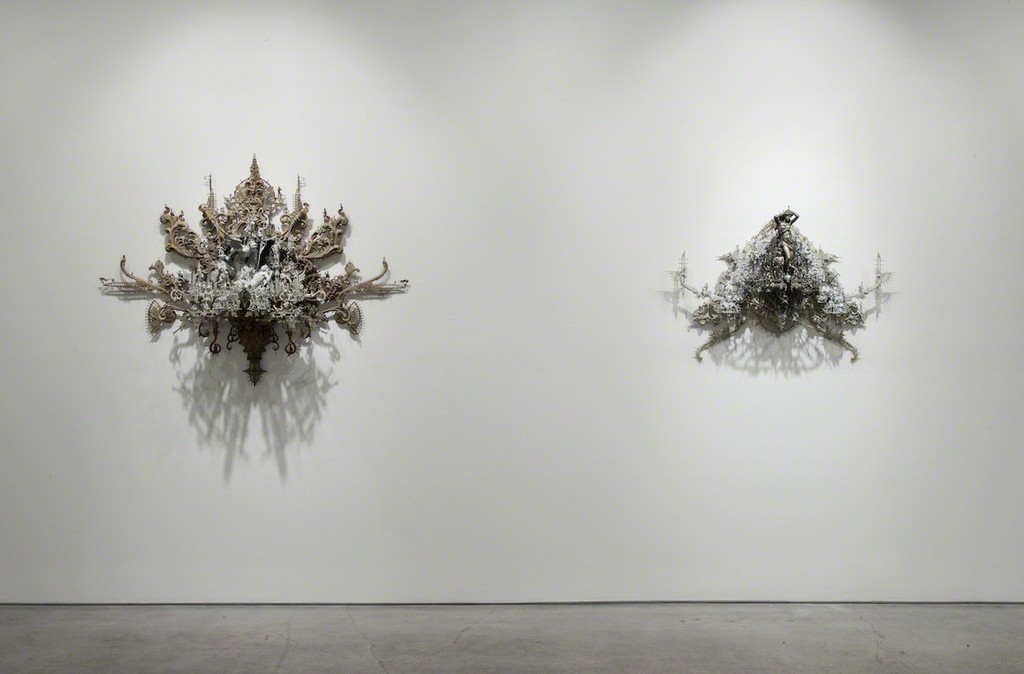 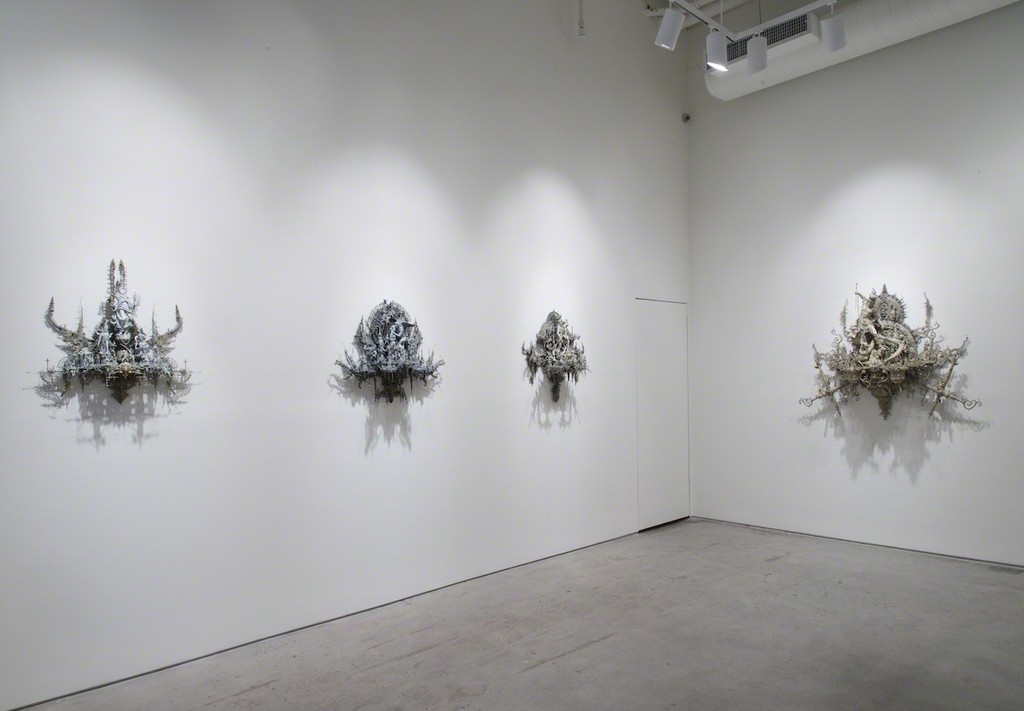 This will be Kuksi’s fifth solo offering with the gallery and will include eight works in the artist’s signature medium of mixed media assemblage. The artist will be in attendance for an opening reception on Thursday, October 15, 2015.

When observing the delicate wall assemblages Kris Kuksi constructs, intricacy seems almost an understatement. Excessively detailed, each work plays out an epic drama meticulously assembled piece by piece. Largely influenced by the ornamental details of the Late Baroque and Rococo movements, these embellished pieces possess a darkness. Chaos, downfall, and anguish are poignant struggles amongst Kuksi’s miniature models, their plight serving as commentary on humanity’s social, political and spiritual obstacles. The title of the exhibition—Amalgamation—sheds light on Kuksi’s elaborate process of collection, and also bears reference to the multiple chaotic narratives taking place in each ornate piece.

Many of the central figures in Kuksi’s assemblages resemble deities, transcending the disorder and turmoil that surround them. Rage and conflict between the smaller, less dominant figures is literally below them. In Farewell to Arms, a mythical warrior rises above a mass of smaller figures clambering beneath, struggling to keep hold of their heavy artillery. Perhaps this profound difference in size between the godlike central figure and smaller mortal figures metaphorically reveals the sheer distance humanity is from total serenity. Kuksi elaborates, “Human beings are limited by their greed and carelessness yet they know it. Humans know how to be better and solve problems that are pressing the advancement of our species but we don’t always do the right thing. We are consumed by our darkness and yet we don’t realize we don’t have to be. I think if we can embrace our dark impulses, we can overcome them.”

The process of assembling these intricate works is complex and time consuming, and sourcing the right piece to fit can take months. Balance and placement are of equal importance in the construction of the assemblages, thus resulting in the majority of the works having a symmetrical appearance. Kuksi explains, “It is balance of chaos vs. symmetry which can take lots of time just thinking out the arrangement for balance and control, rushing the process will leave too much chaos.” Aside from the painstaking arrangement of each assemblage, the artist pays special attention to every individual piece, hand painting them with careful patience. In many cases, the final result is unknown and it is the process of assemblage that builds the narrative and speaks to the artist.

Over the many hours spent constructing a piece, Kuksi develops a fondness for each work as he explains, “I will love a new piece I’m building and I will sink in sadness to have to come to an end just to finish it.” However, the necessity to move on and begin another work is vital to the artist’s ambition as he explains, “My hope is that my art is a tool for recognition, at least in the short term. Tomorrow is always a new struggle and a new fight to survival.”