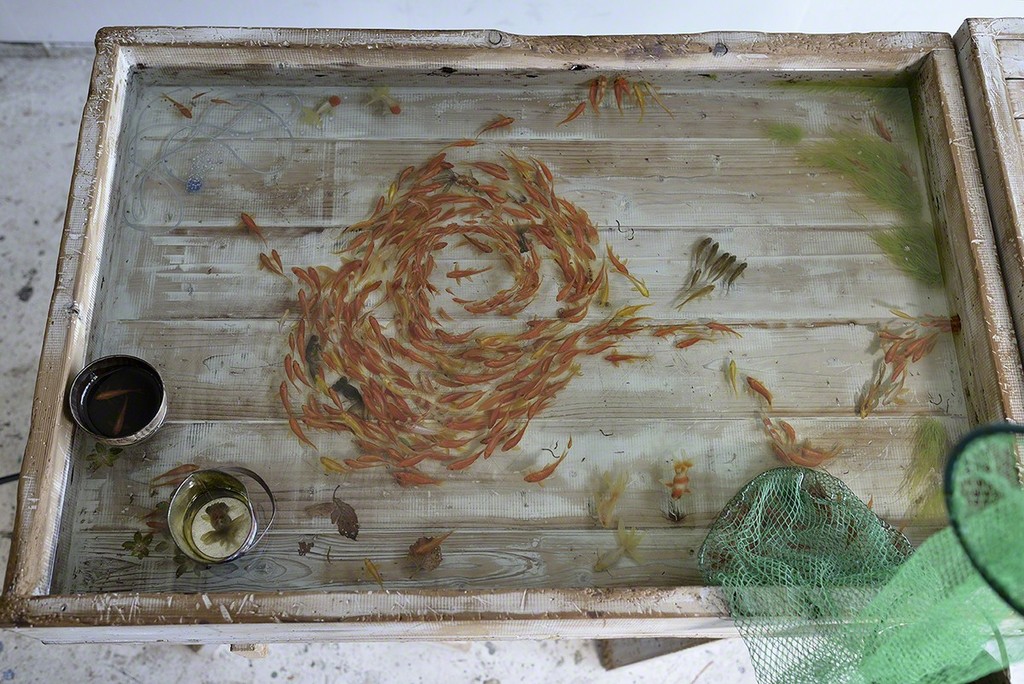 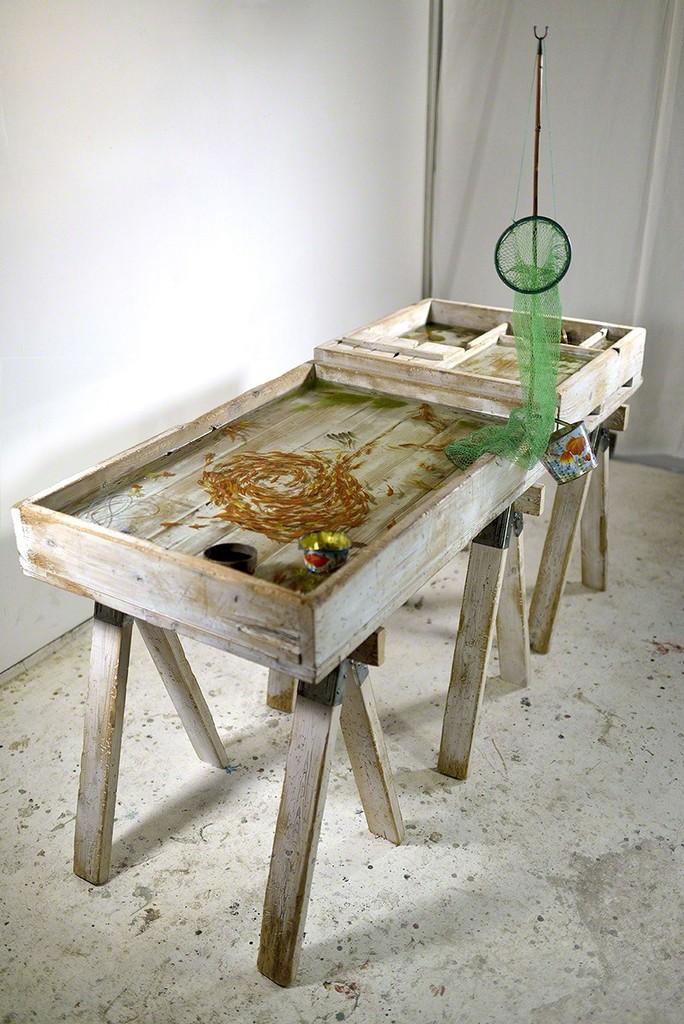 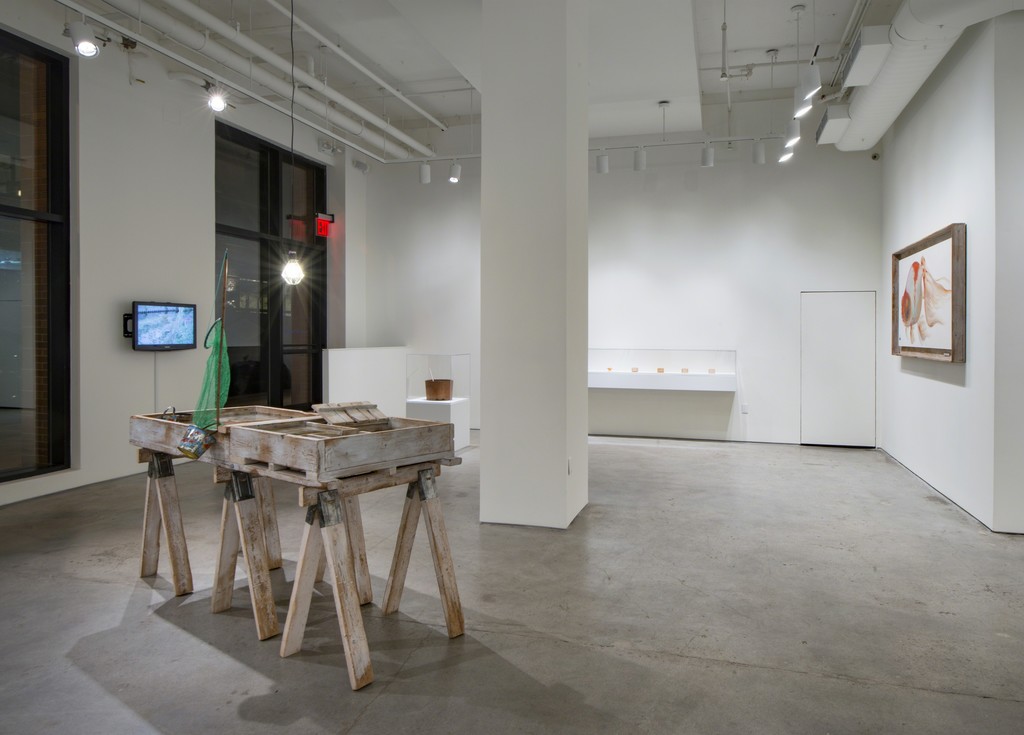 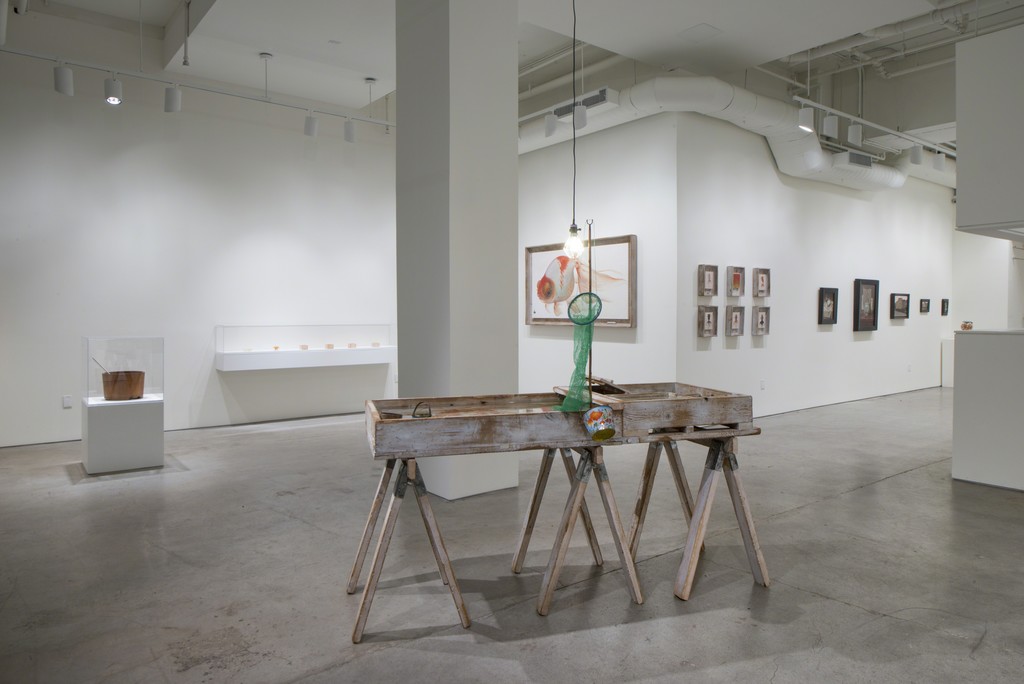 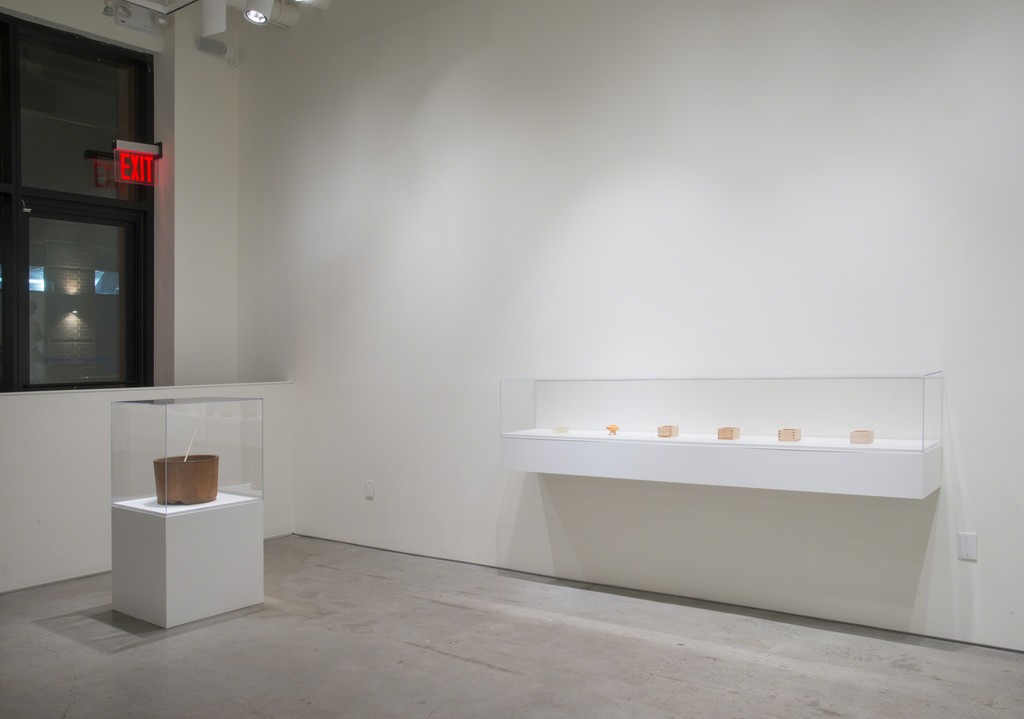 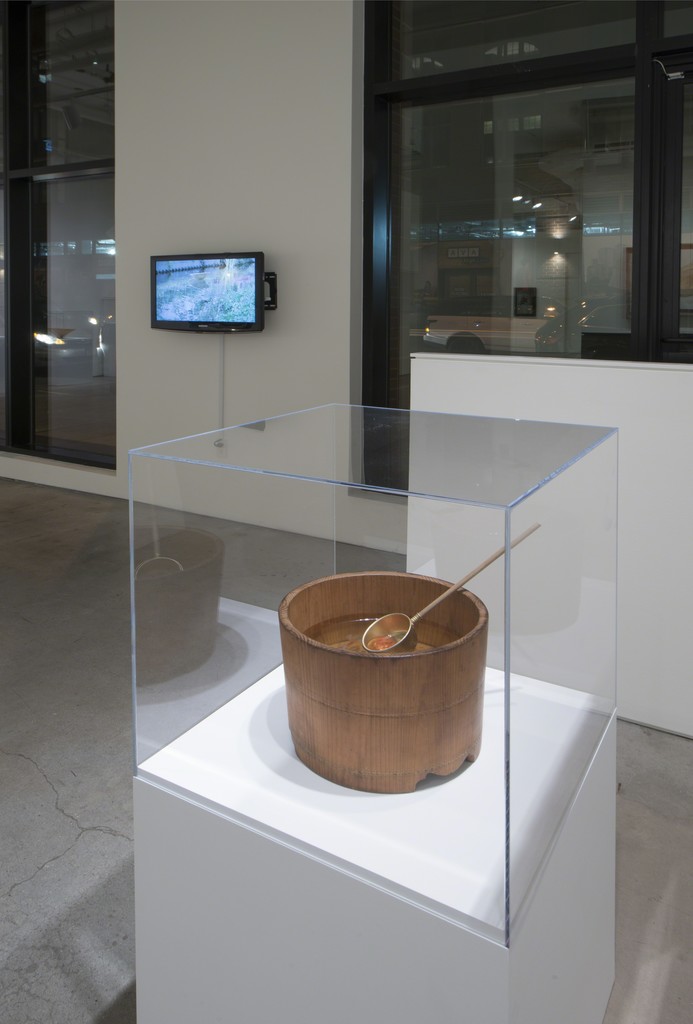 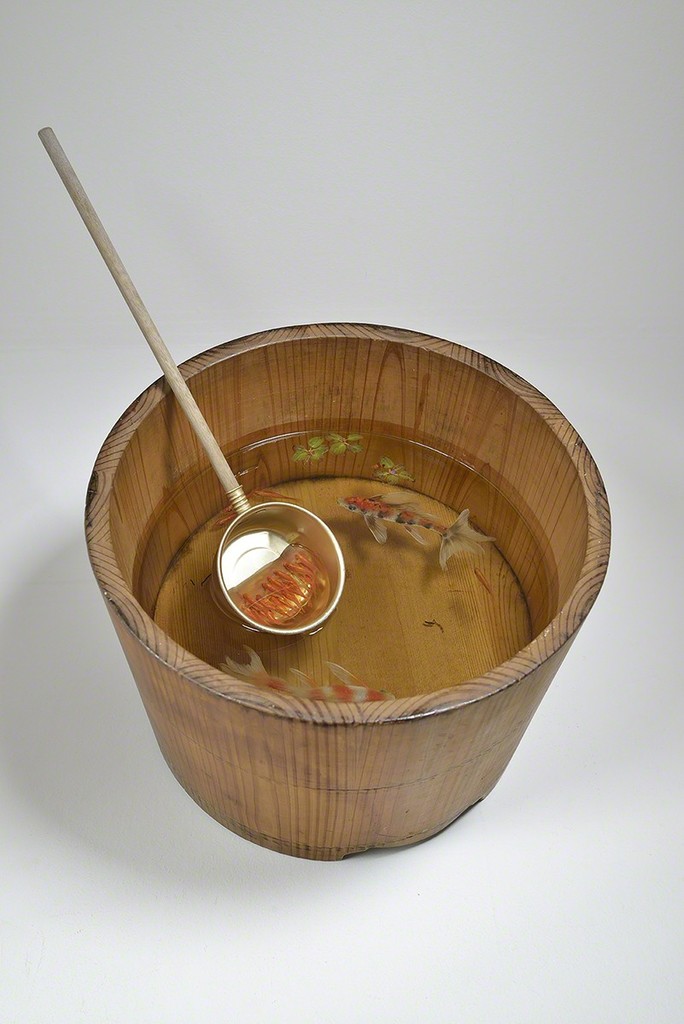 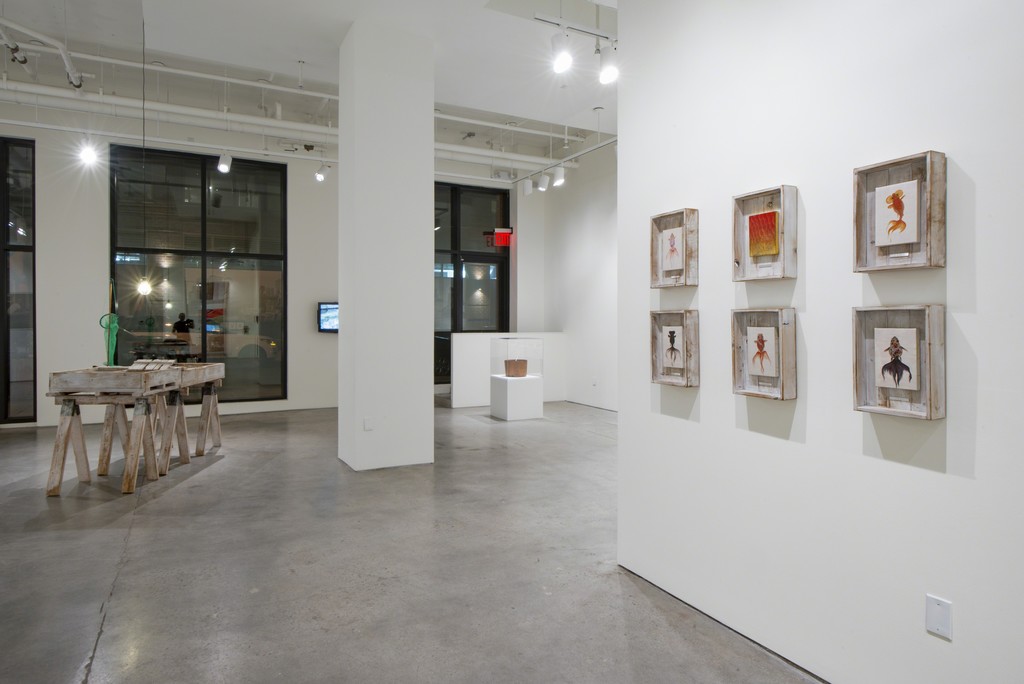 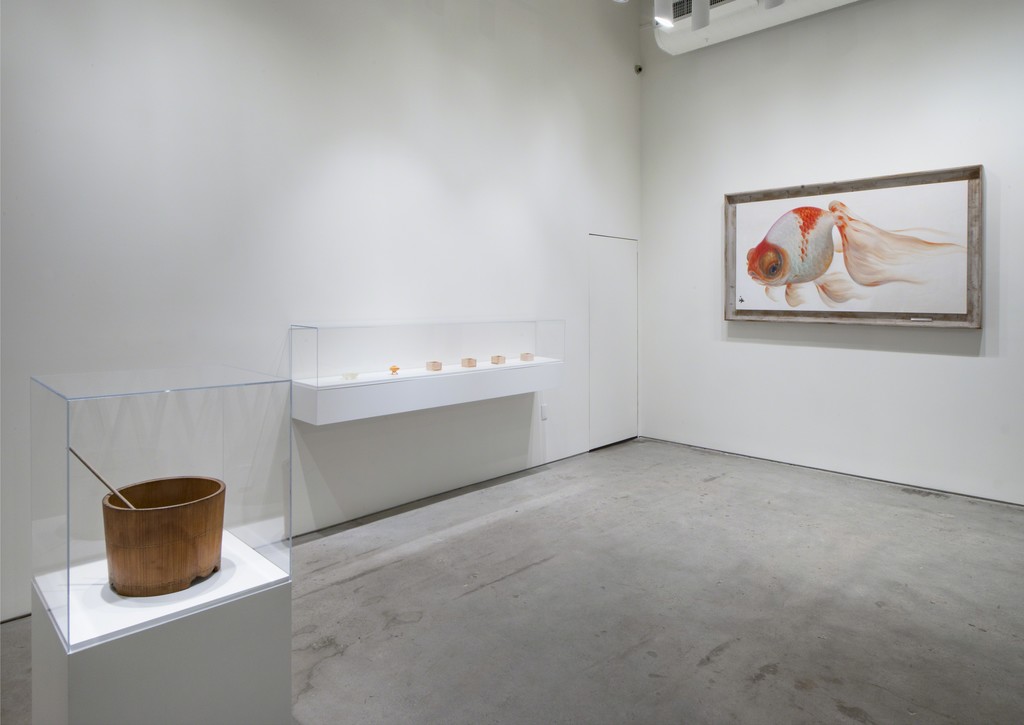 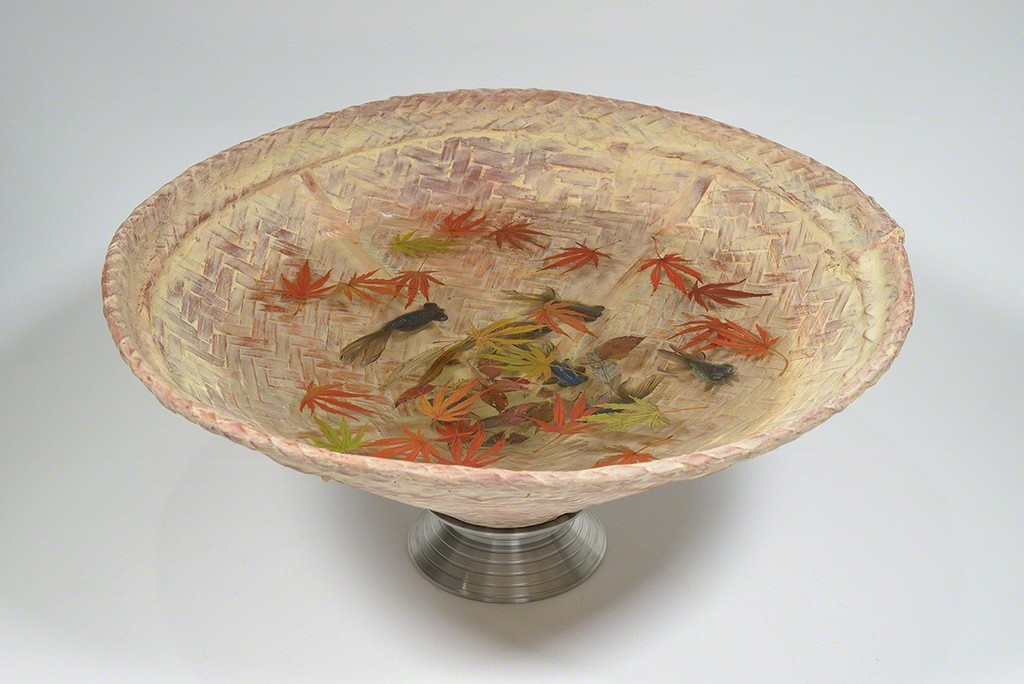 This body of work will feature Fukahori’s signature three-dimensional acrylic and resin paintings of goldfish—one of which is the artist’s largest work-to-date. In addition to the highly popular resin works, Fukahori presents a series of acrylic works on canvas and wood, as well as his first video work. The artist will be in attendance for an opening reception on Thursday, November 19, 2015.
For Goldfish Salvation, Fukahori reinforces his sincere connection to the crucian carp’s modern relative as a symbol of identity, both collective and personal. As the title of the exhibition suggests, Goldfish Salvation tells the story of Fukahori’s profound revelation after a period of uncertainty in his artistic career. Fifteen years later, the artist continuously paints these fish that have come to represent him, his weaknesses, and in a broader sense, humanity. Fukahori explains, “In the aquarium, similar to human society, there is a story of birth and death. As long as they live, these goldfish will continue to soil the fish tank, and if not changed, the water will only get tainted leading to death for all the goldfish. This is quite true for the human species as well... The goldfish that I paint are not really goldfish, but representations of people. I feel as though the fish tank is only foretelling what would happen to the earth in the future. We as human beings are the main source polluting our own air we breathe.”
Keeping dozens of fish in tanks and bowls around the studio, Fukahori observes the fish and sketches each one, using this as his only form of reference for the paintings. Time in particular is essential to the artist’s resin works. Each hyper realistic painting is completed over a period of many months. Beginning with a base layer of resin, the
artist will paint a layer of the fish’s pelvic fins, followed by another layer of resin and set to dry for two days. The process is repeated layer by layer for the body, eyes, and top scales, until Fukahori is satisfied with the result. Combined, each layer builds a striking illusion and form shadows below the fish, liberating the painting from a traditional flat canvas. A small work such as the artist’s Kingyo Sake cups can take two months to complete while more substantial pieces such as the artist’s largest work Kingyo Sukui (The Ark) take much longer.
In Four Seasons of Rain, Fukahori presents a series of four Japanese umbrella hats turned upside-down to reveal small pools of water. Each pool contains fish and foliage reminiscent of the four seasons—fire orange carp and fallen petals for autumn, black moors and burgundy leaves for winter, a pair of comet fish and sprouting moss for spring, and a single white fantail resembling a glowing sun for summer. An extension of this series is explored in the artist’s first video work. The film depicts an umbrella hat drifting through a river, eventually making its way to the ocean. Fukahori elaborates, “The scenery in which umbrellas flow symbolizes the time passing and is a visual compilation of my process in creating all of my works.” Inspiration for the work came from the eleventh century Japanese poet Kamo-no-Chomei: “The river never stops flowing. The water is always new and never the same...People in this world and their abodes change in the same way.” It is this philosophy that emphatically encapsulates the artist’s ethos.
Alongside the resin works and the video piece, Fukahori will present a series of works on canvas of various breeds of goldfish. Iridescent paint is applied to the canvases as a subtle reference to the lustrous colors of each fish’s scales. The artist’s work is exclusively focused on the subject of these fish, as they were the catalyst for Fukahori’s invigorated artistic motivation, “To me, goldfish are everything. By acknowledging their presence, I was able to proceed to a deeper level of expressionism... I have been trying to figure out why I felt the passion that fell upon me and will continue my journey to find the answer.”
Born in 1973 in Aichi, Japan, Fukahori currently lives and works in Yokohama. Selected solo exhibitions include Goldfish Salvation 2 (2014) at ICN Gallery, London, United Kingdom, exhibition in conjunction with a live painting and artist talk at the Japan Foundation; Goldfish and Water Yue (2014) at E & C Gallery, Fukui, Japan; and The Painted Breath (2013) at Joshua Liner Gallery, New York, NY. Group exhibitions include Direct Address (2013) and Summer Group Exhibition (2012) at Joshua Liner Gallery, New York, NY; and Mystery (2005) at Hamada City World Children’s Museum, Hamada. public collections include the Edogawa Art Museum, Tokyo, Japan and The World Children’s Museum, Hamada City, Japan.