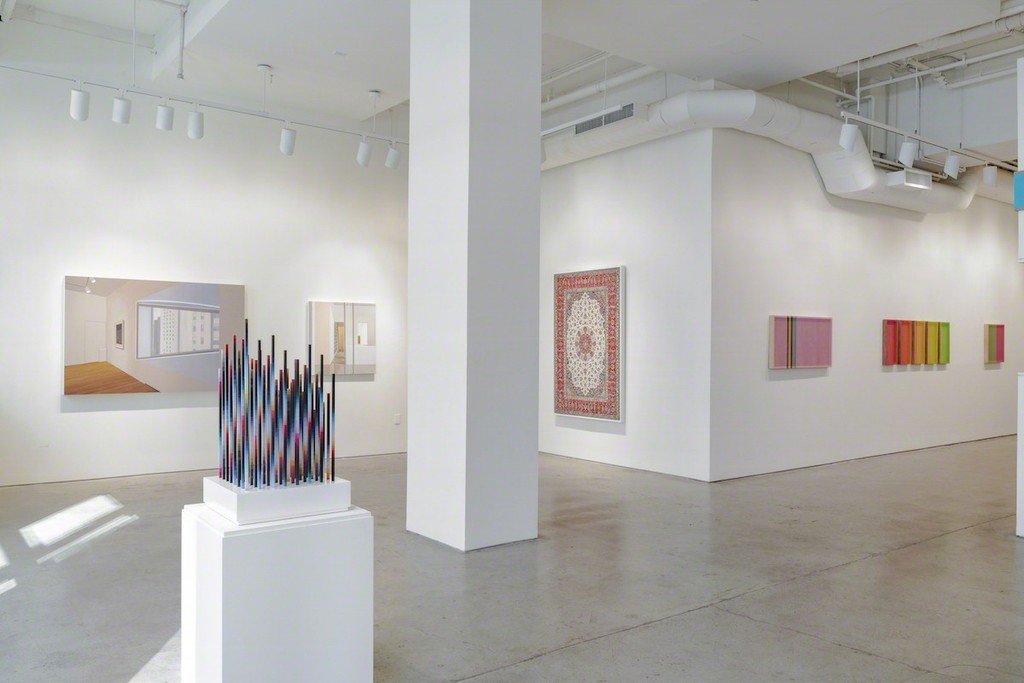 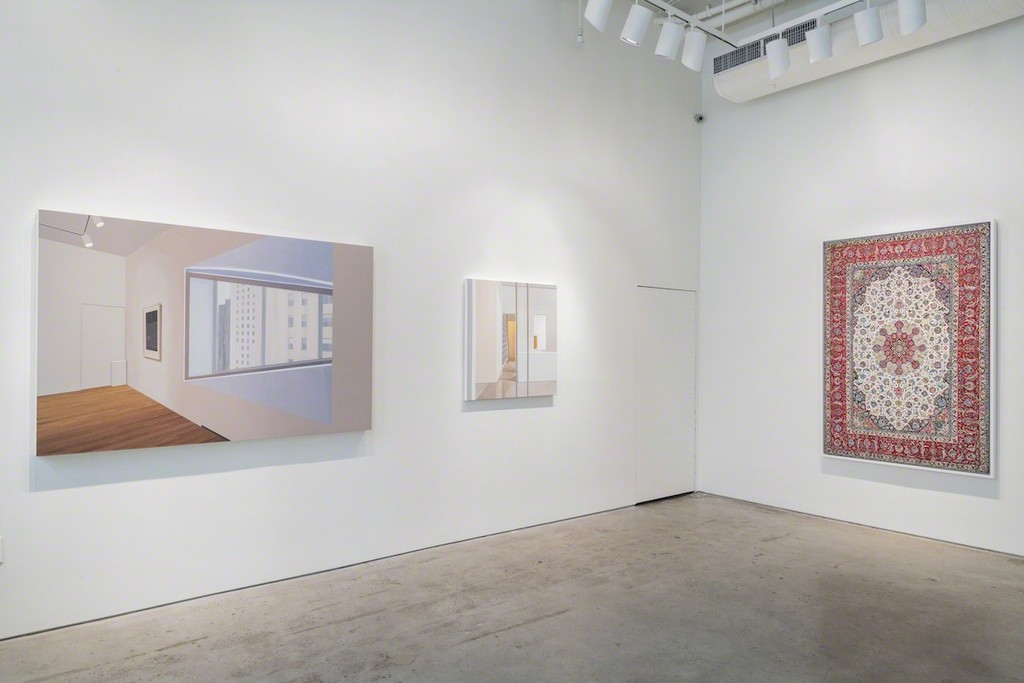 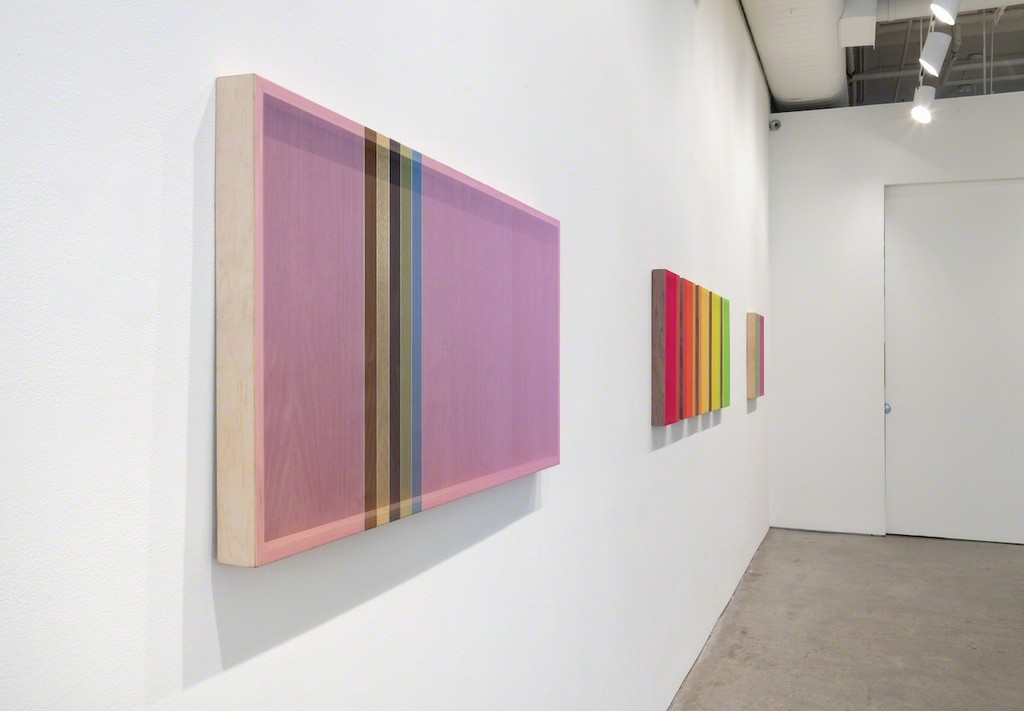 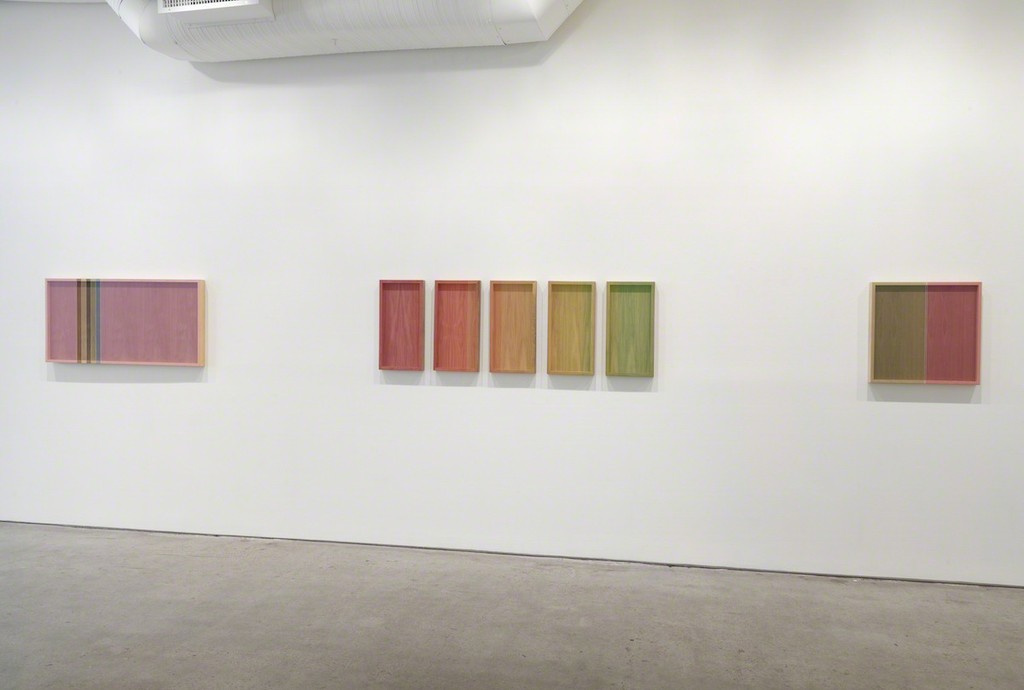 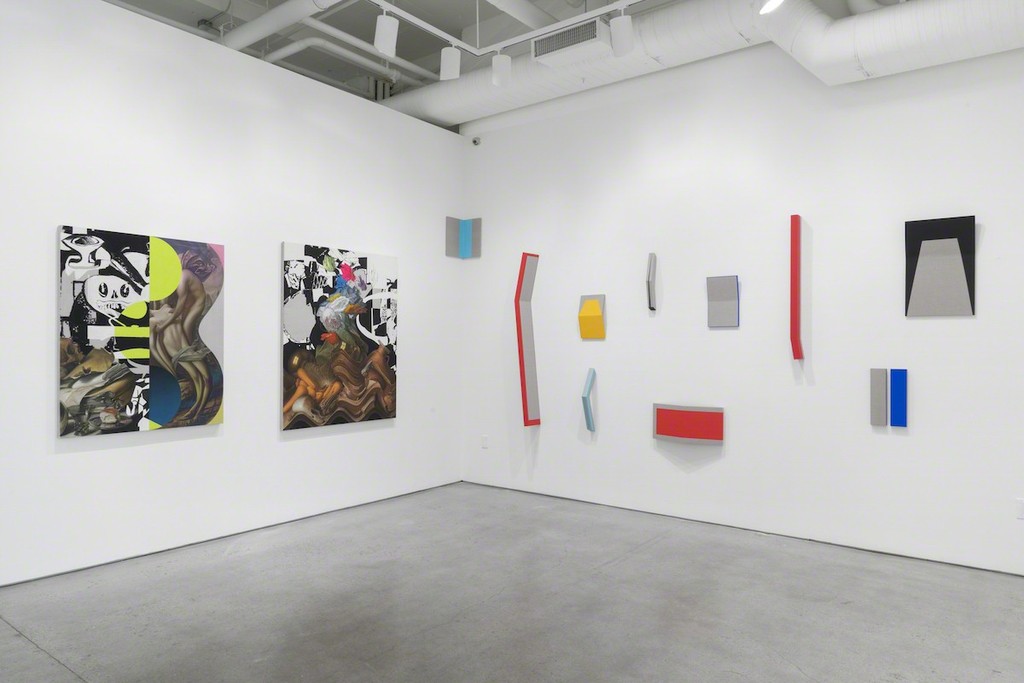 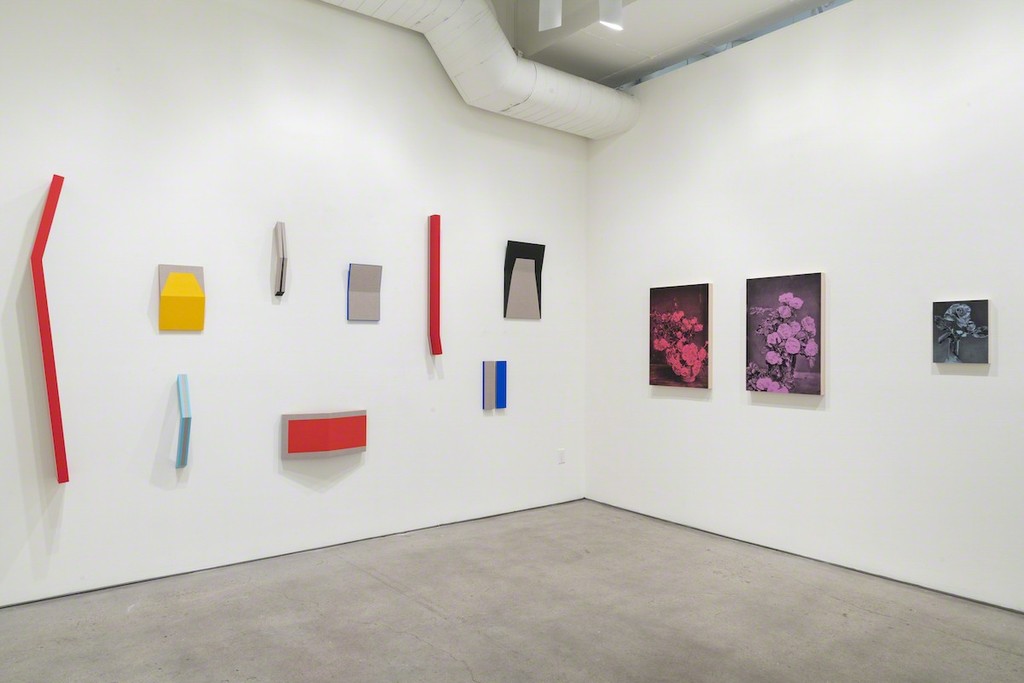 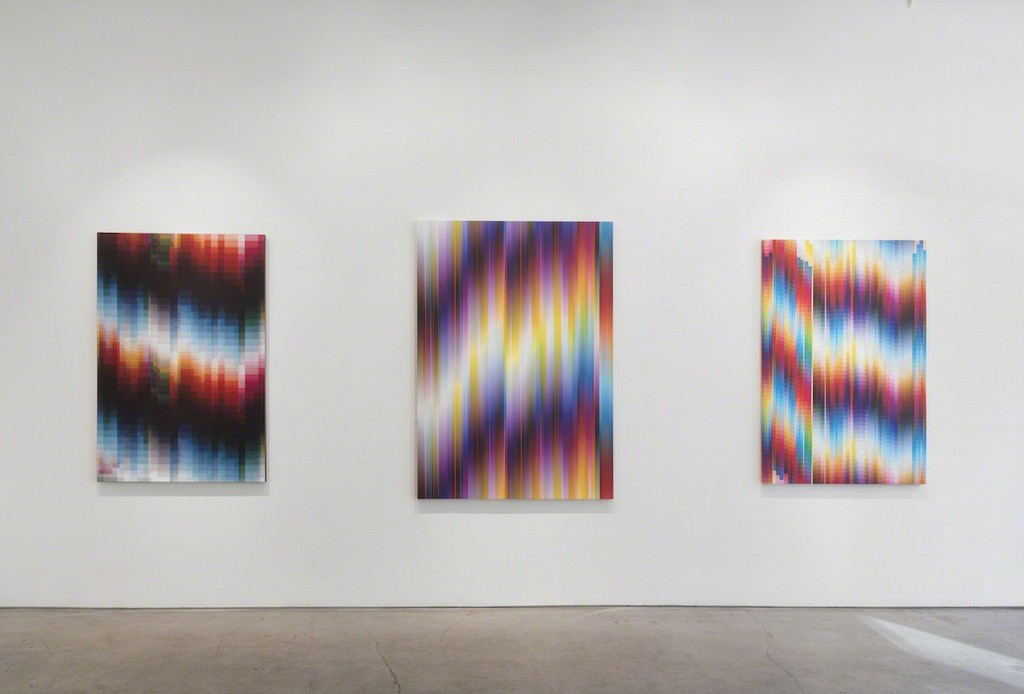 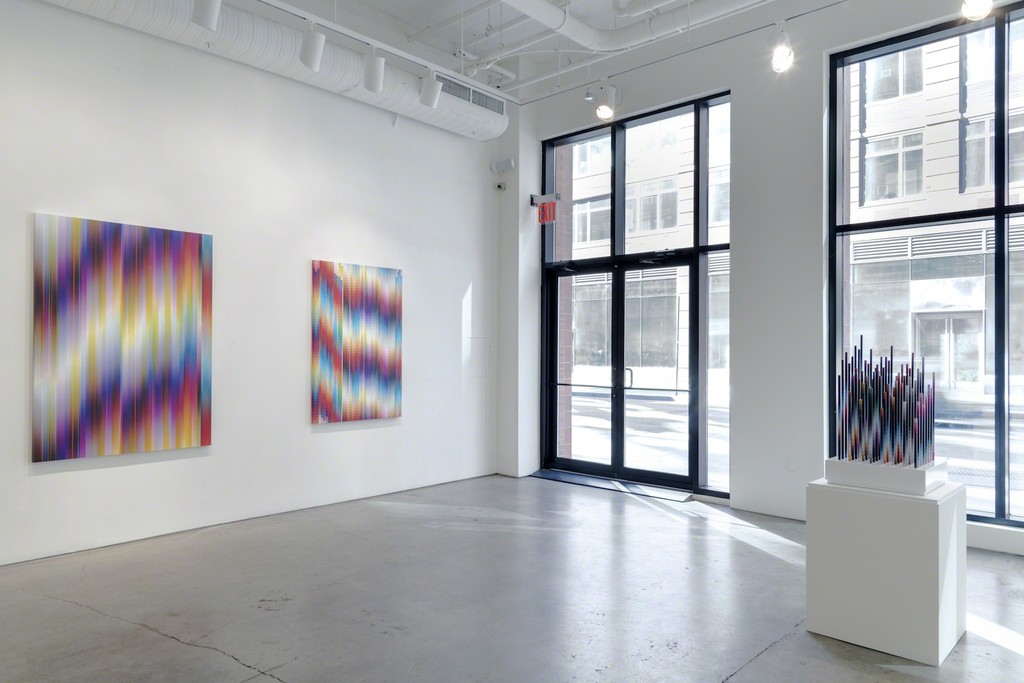 From Geometric Abstraction and Minimalism to Digital Art, this exhibition covers an extensive scope of contemporary artistic movements. Summer Mixer opens on July 12 and will run through to August 17, 2018.
Miami-based artist Jason Seife presents a new Persian carpet painting alongside a related work on paper. Seife recreates Middle Eastern material culture using modern day materials and compositions, encouraging viewers to notice traditions hidden in plain view. Inspired by his heritage, Seife imbues his Persian carpets with personal meaning and emotion by using palettes that reflect his mood. Even though these paintings use non-traditional colors and compositions, they manage to capture the motifs and tenants of traditional Islamic art but with a fresh and personal approach.
Louise Blyton creates three-dimensional paintings that interact with the architecture of the gallery space. By manipulating the shape of the traditional canvas, the Melbourne-based artist, conceives her own spatial dimension, confusing the standard relationship paintings have to any gallery’s standard white walls. Some works appear to climb the surface of the walls, while others straddle columns and corners, interrupting the flow of the white cube. To create these works, Blyton stretches raw linen over custom supports and adds coats of dense pristine acrylic paint or layers of pigment. From afar, these constructions appear robust with clean planes of color, however, up-close there is evidence of the artist’s hand in the subtle shifting satin and low gloss finishes.
Los Angeles based artist Brian Wills meticulously places colored rayon thread over wooden panels and shallow boxes, constructing abstract works that are in a constant state of visual flux. The surface of Wills’ works vibrate and come to life with motion and ambient light, by virtue of the interaction between the densely spaced strings with each other and wood grain beneath. Depending on the viewer’s movement, proximity, and angle to the painting, the strings either appear to gain or lose translucency at times or transform into thick ribbons of color. Wills’ precise craftsmanship erases the artist’s hand and gives the illusion that his brightly colored paintings are manufactured by machine.
Moving into the realm of Digital Art, Felipe Pantone presents new paintings and sculpture, showcasing his futuristic style; one noted for its electric, kinetic, and dynamic quality. The Argentina-born, Brooklyn-based artist exploits an ultra-modern aesthetic as a way to “evoke digital experience through inanimate objects” and integrate technology into the realm of fine art. To create his works, Pantone applies cyan, magenta, and yellow inks to an aluminum panel using a CMYK printer. By moving the panel during the printing process, the artist gains some authorship over the end result. The gradients and psychedelic accents that appear in Pantone’s paintings and conduit sculpture recall Italian Futurism and computer glitches, bringing together elements from the past, present, and future.
Tangentially related to Pantone, Beacon, NY based artist Andy Mister also explores the relationship between mechanical and manual reproduction in his Xerox-realistic drawings of floral arrangements. Mister blends graphite, carbon pencil, and charcoal over acrylic-washed paper, achieving an aesthetic reminiscent of zines and albums of the DIY and punk scene. Meaning is both created and lost when Mister copies source material taken from magazines, film, and the internet. Through this process, Mister removes visual culture from its specific historical context, allowing new associations to emerge. Mister states, “I am interested in the relationship between images and connections that the viewer creates when encountering them, connections that I cannot control.”
Matt Hansel and Sarah McKenzie round out the exhibition with paintings that investigate the history of the medium: stylistically and institutionally. Hansel creates Postmodern work that references and incorporates the tenants of 17th Century Dutch still lifes and vanitas painting. Layering trompe l’oeil elements with imagery from classical painting and warped cartoons, Hansel’s work plays with visual absurdity and perception by uniting seemingly contradictory iconography. While Hansel reinterprets the past through a digital lens, McKenzie explores “the role that architecture plays in orientating the viewer’s experience of a work of art,” in her White Walls series. McKenzie gives equal attention to the empty benches, doorways, and exit signs as the art depicted, compelling the viewer to consider the contrived and sterile environment of galleries and museums. Deliberately undermining the illusion of depth and unity, McKenzie applies oil and acrylic paint, blending various painting styles simultaneously on one canvas.