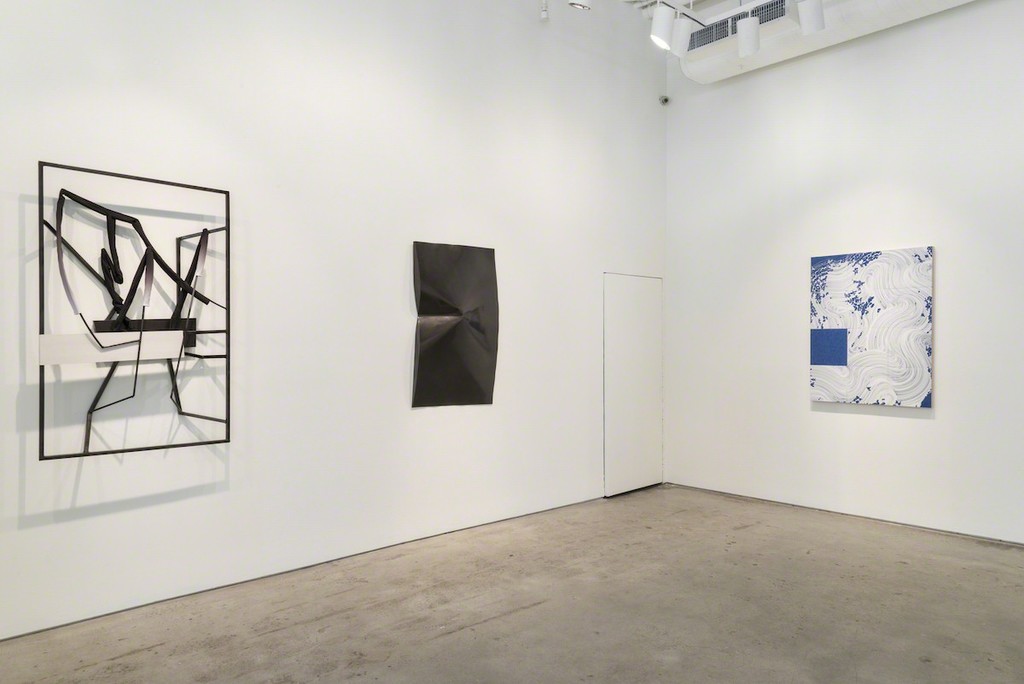 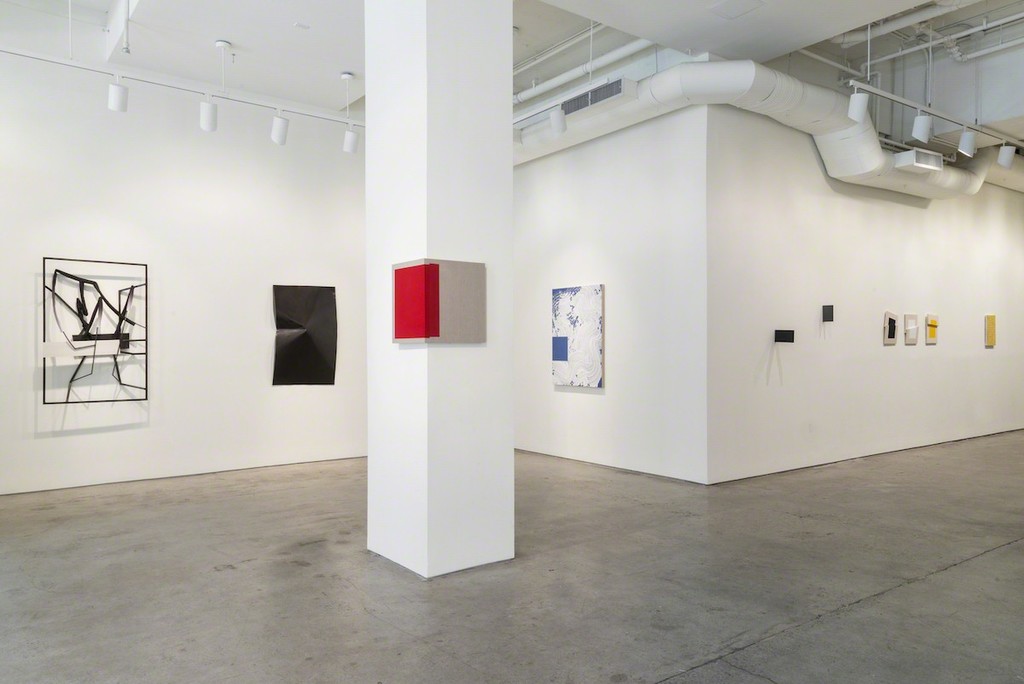 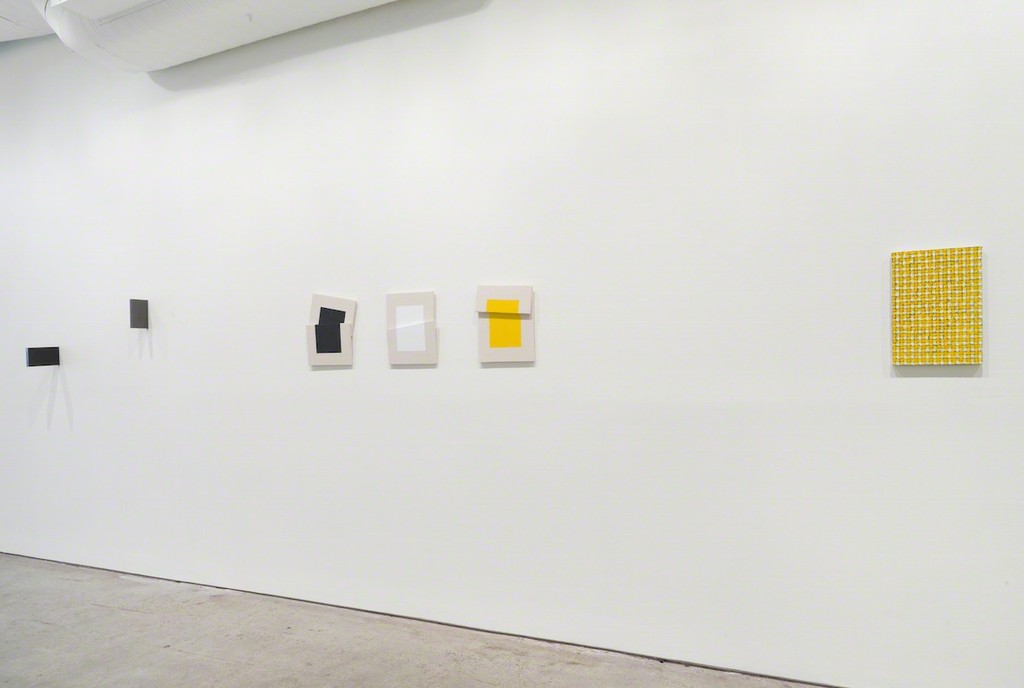 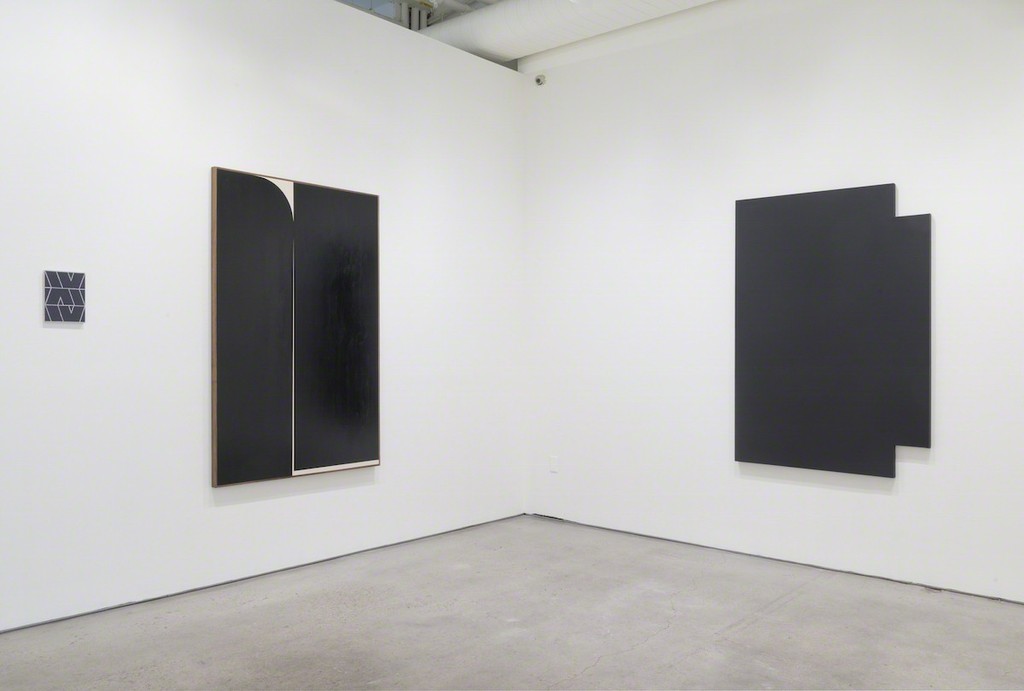 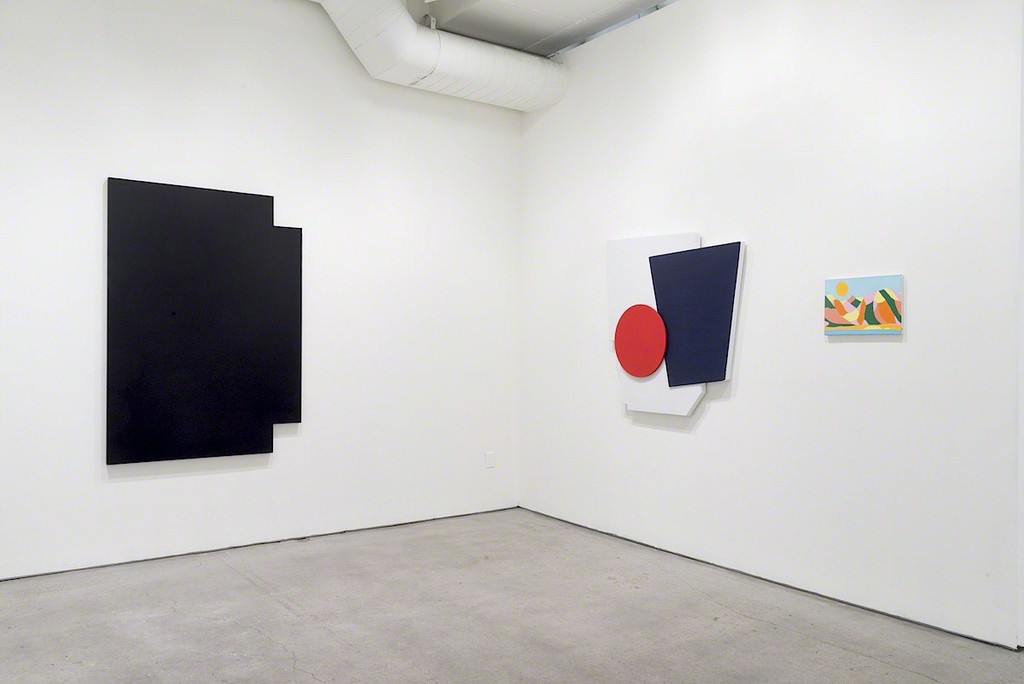 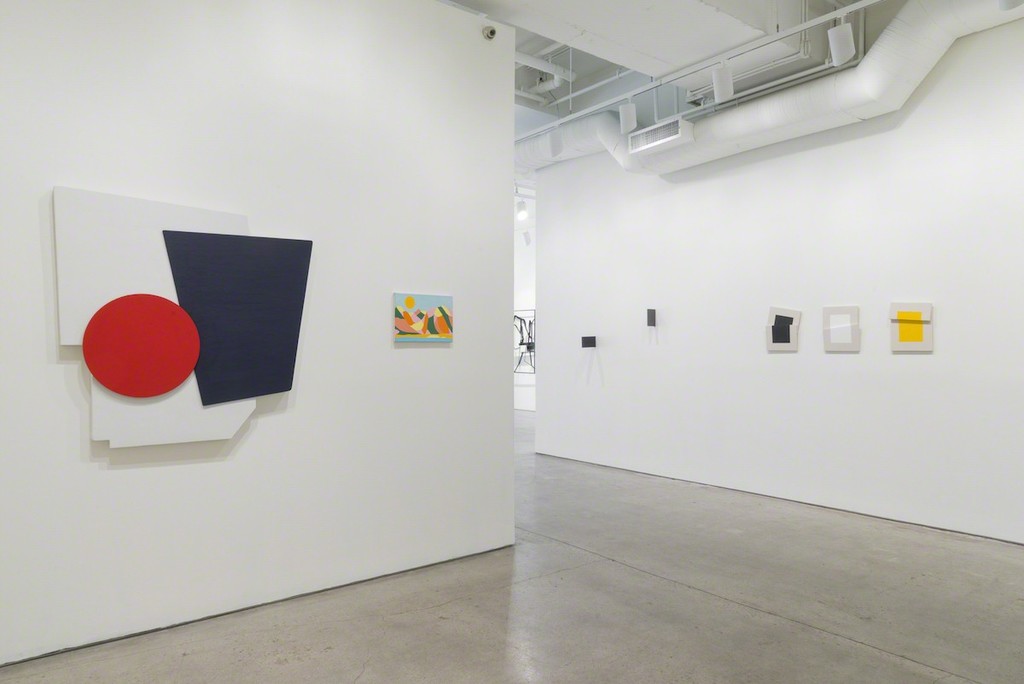 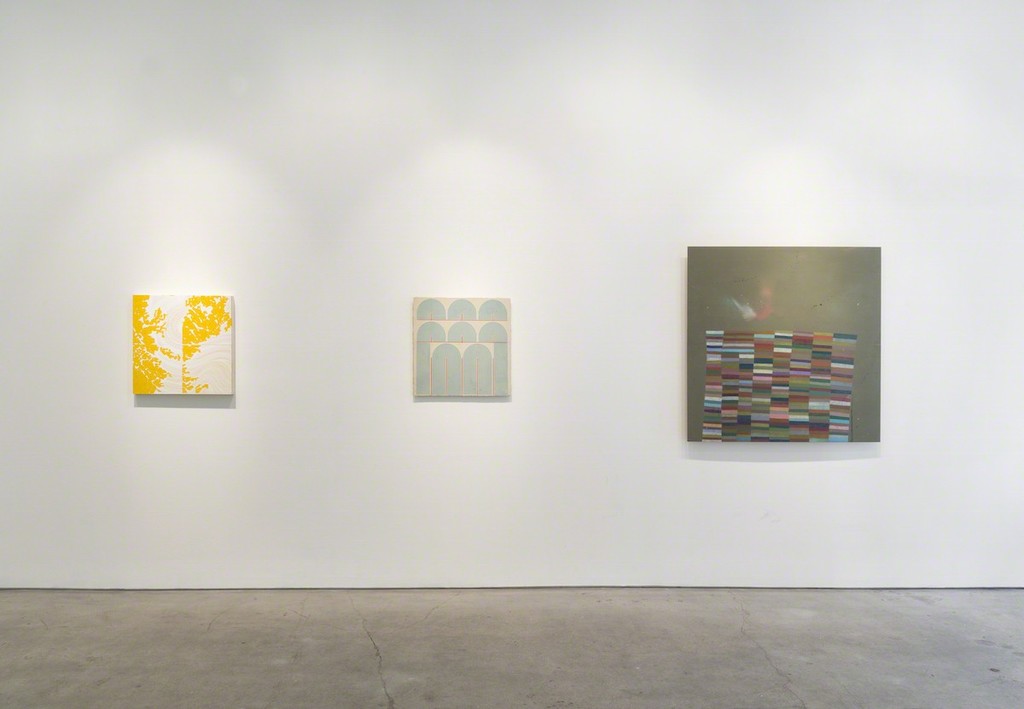 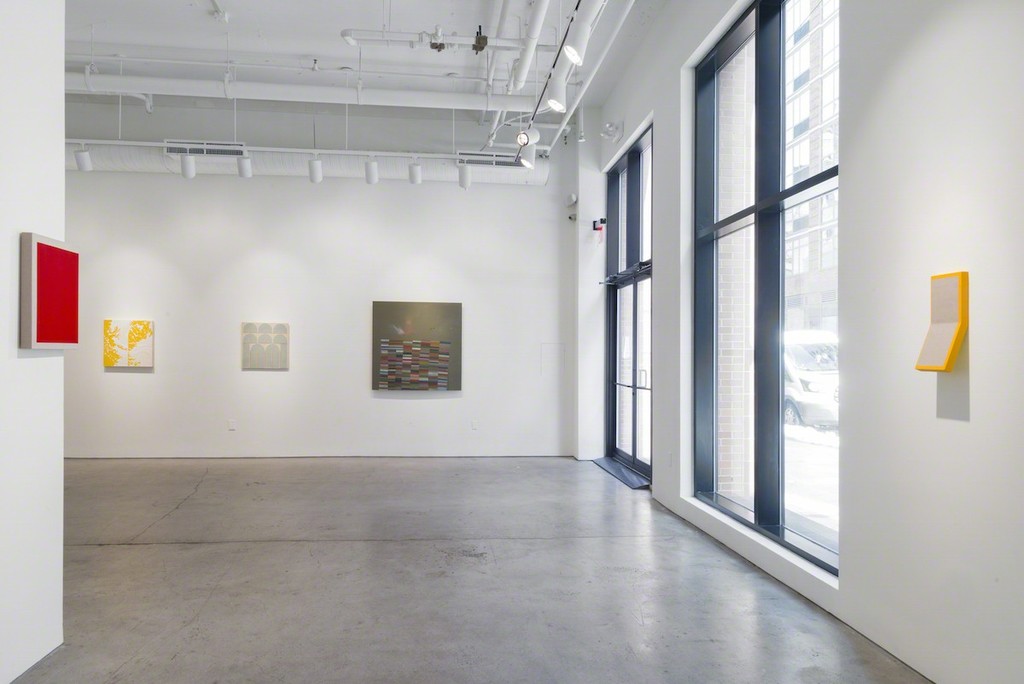 Superposition is a term borrowed from quantum mechanics, referencing the ability of electrons and other atomic building blocks to exist in multiple places and states at the same time. With precise observation these atomic elements can reveal seemingly paradoxical positions simultaneously This show seeks to contextualize work that shares a certain visual nuance and subtlety by locating individual works in discrete relation to each other, revealing surprising insights through the possibility of alternate and contradictory states.

Evan Robarts and Susan York clearly have a deep connection to their materials of construction, yet each resists the traditional categorization associated with their chosen media. Robarts’ “mop paintings” consist of linoleum tiles mopped with plaster and mounted to the wall. This seemingly straightforward process manages to invert expectations of both material and application in that plaster is often associated with sculpture and mopping is typically a method of erasure. Yet Robarts manages to create a painterly mark using a technique meant to remove marks. In a somewhat similar way, York’s cast graphite sculptures appropriate the classic drawing material and transforms it into three-dimensional objects devoid of both line and mark. Her primary concern is exploring the transition between the second and third-dimension, although with a different character than Robarts. Robarts is comfortable blurring the boundaries, but York seems to want to define and explore those boundaries. Indrikis Gelzis also resists being located in any one mode of expression. His use of steel, fabric, and wood are also employed in a way reminiscent of painterly lines in space, albeit more rigid and angular. These artists actively choose the liminal space between painting and sculpture, somehow being both and neither thing.

Vanha Lam and Stephen Somple seem to rebel against traditional notions of design and composition. Both embrace elements of chance and deformation as a means of creation. Somple makes hybrid organic and geometric forms by violently crushing flat metal sheets with three-dimensional objects. Lam, starting with geometric elements on paper or canvas, creates creases and cuts that divide the familiar into the unexpected. For both artists, geometry is employed less as a tool of composition and more as symbolic representation, it’s distortion an iconoclastic impulse that acknowledges the paradox of composition through chance. Following in this sophisticated use of composition, Louise Blyton creates her own spatial dimension by manipulation of the canvas shape, which escapes from the flat surface of the wall, confusing its role as a painting, while appearing to climb across the surface of the space. Elise Ferguson, on the other hand, seemingly embraces the design process by carefully planning compositions digitally. But from there her complicated process of construction, involving layering plaster, masking with tape, silk screening and other labor-intensive methods, allows for mistakes and flaws. The final product finding the perfect balance of order and chaos.

Johnny Abrahams and Joshua Evan both use shaped panel and a monochromatic black palette, however, seen side by side, their work reveals a complicated contrast. The curved shapes and glossy, textured surface of Abraham’s work contradict the sharp edges and matte, void-like quality of Evan’s canvas. Evan presents the viewer with absence, a portal to climb through and lose themselves, whereas Abrahams high gloss surface presents a mirror, inviting the viewer to confront themselves and their surrounding environment.

Creating work that references her long history in the street art community, Alicia McCarthy’s paintings share a kinship with Alain Biltereyst who takes inspiration directly from company logos and graphic design. The worlds of graffiti and advertising, both public visual expressions but with opposing ideological positions, exist in harmony when eloquently moved from the public sphere to the intimacy of the gallery. At the same time, Michelle Grabner, using a similar visual language of pattern and weaving, draws inspiration from the domestic sphere bringing it to the relative community of the gallery. Each artist occupies both public and private space at the same time although in profoundly different ways.

Kevin Umaña and Tessa Perutz share a similar pallet and present the most vivid and colorful works in the show. However, these artists approach abstraction from very different perspectives. Perutz, working directly from nature, flattens landscapes into their formal components into interlocking geometric puzzles. Umaña’s work similarly flattens formal elements into shape and pattern but in a less pictorial way, abandoning the figure in a search of more fundamental concepts of form and structure.

Superposition hopes to bring emerging and established artists together to highlight work that defies easy categorization, embraces contradictions and treats subtlety as a virtue. It’s an invitation for the viewer to consider radical differences between the seemingly similar and to create connection where one would expect conflict.