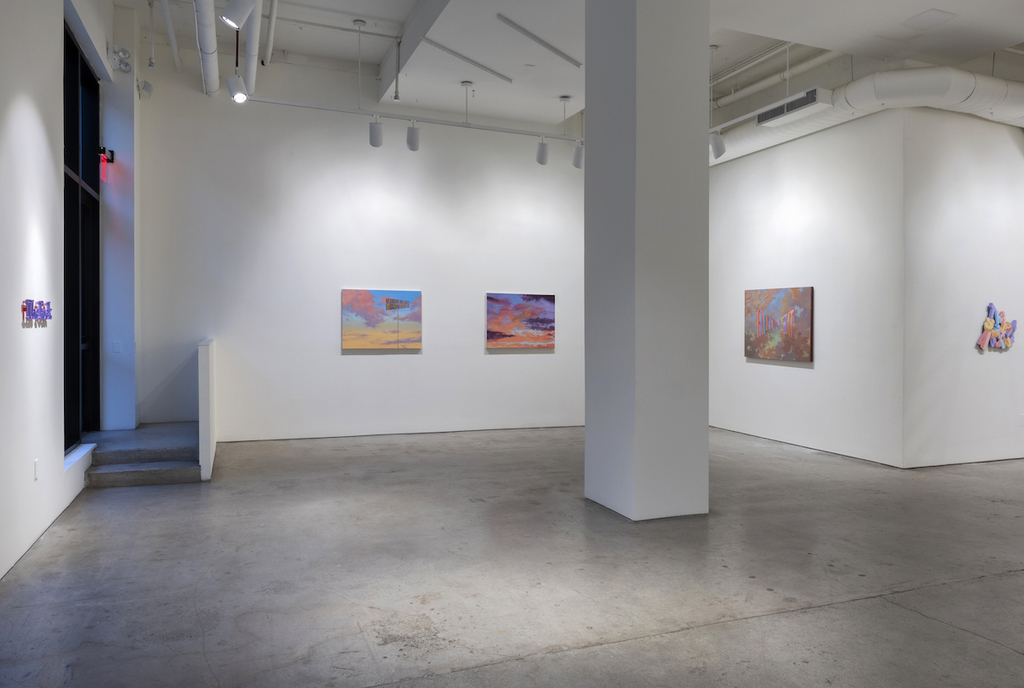 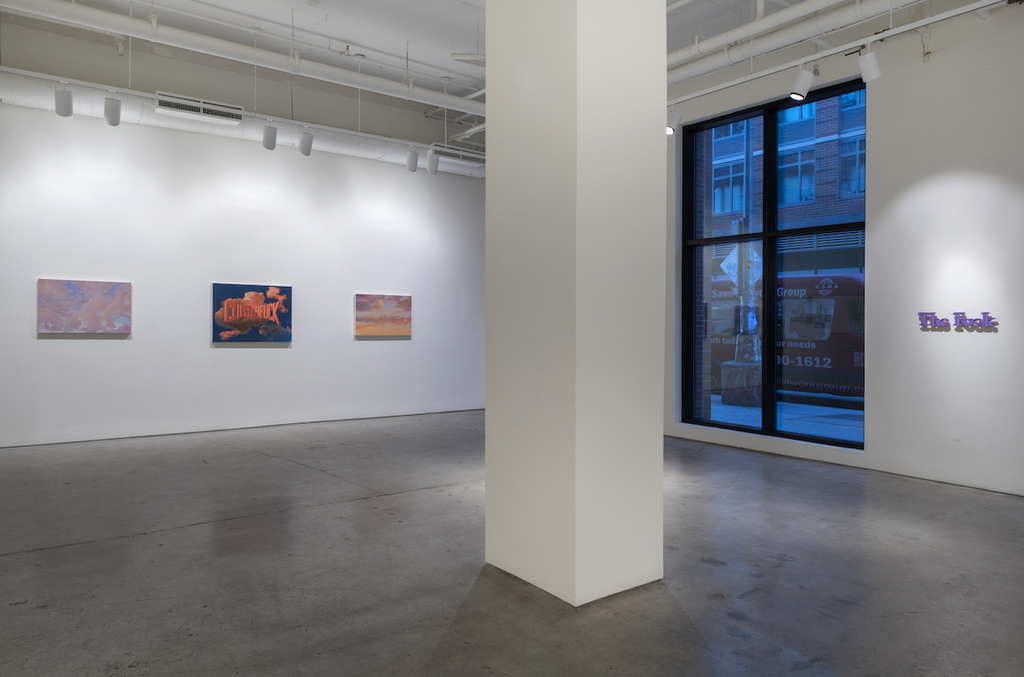 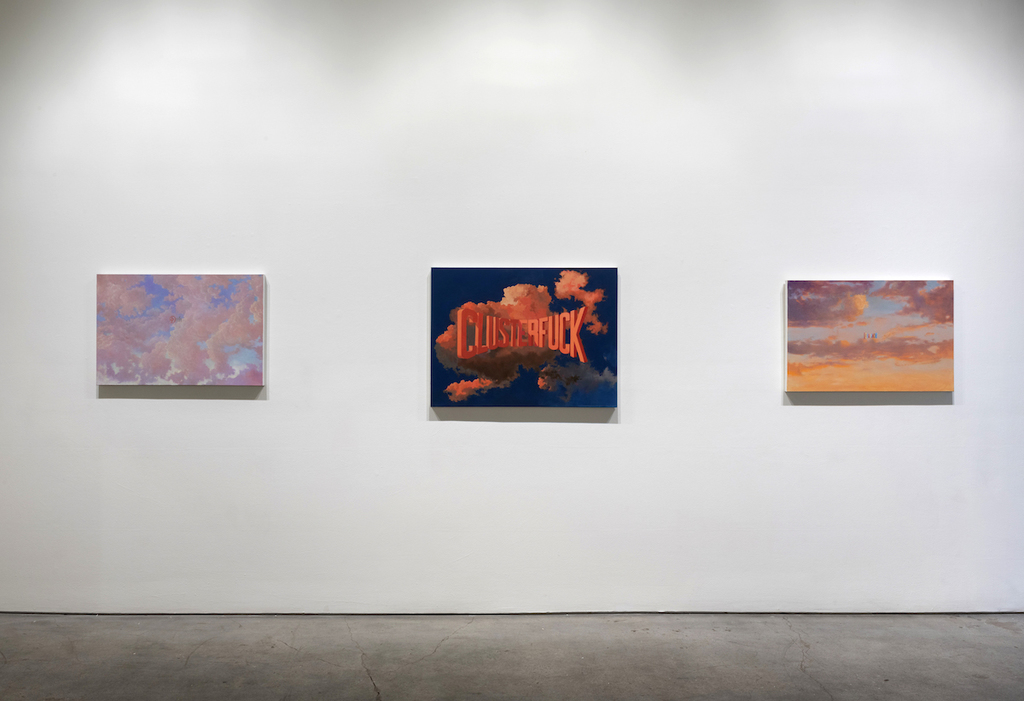 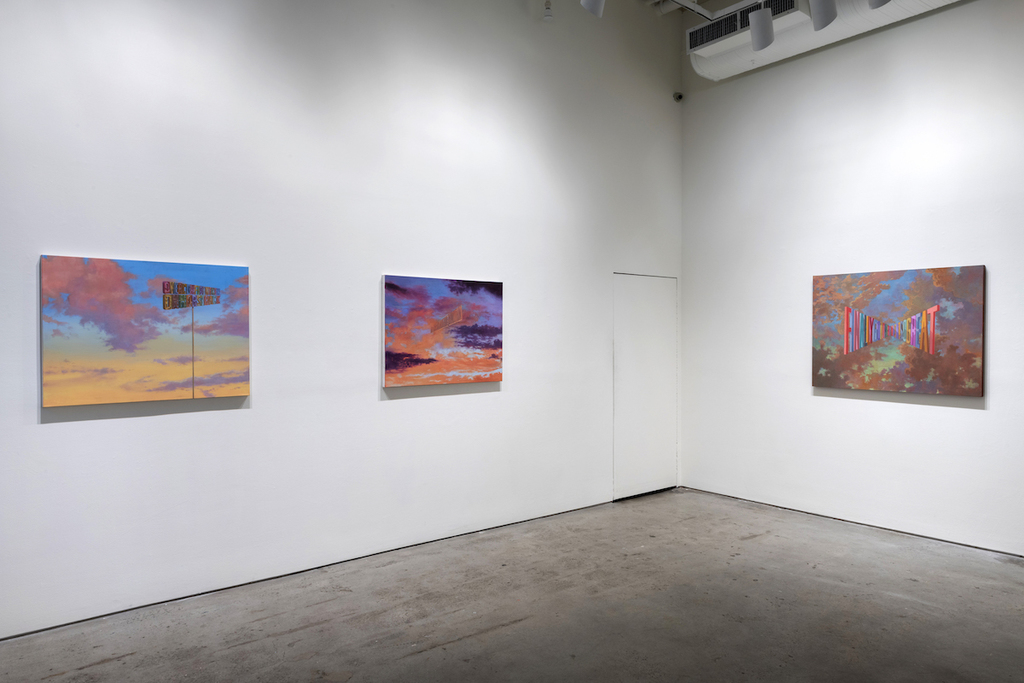 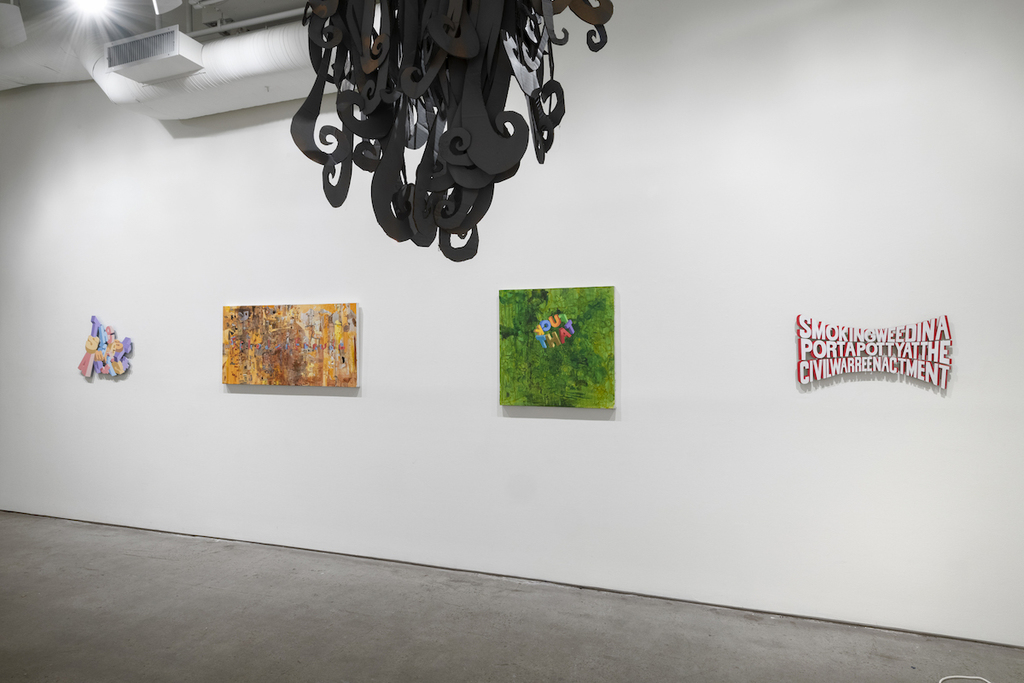 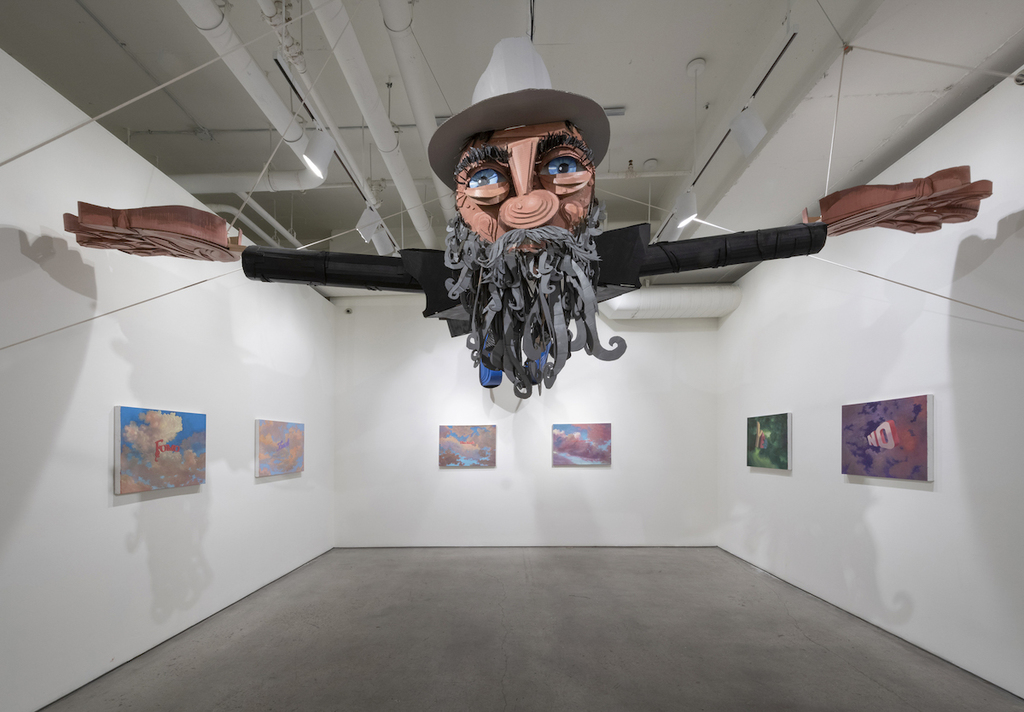 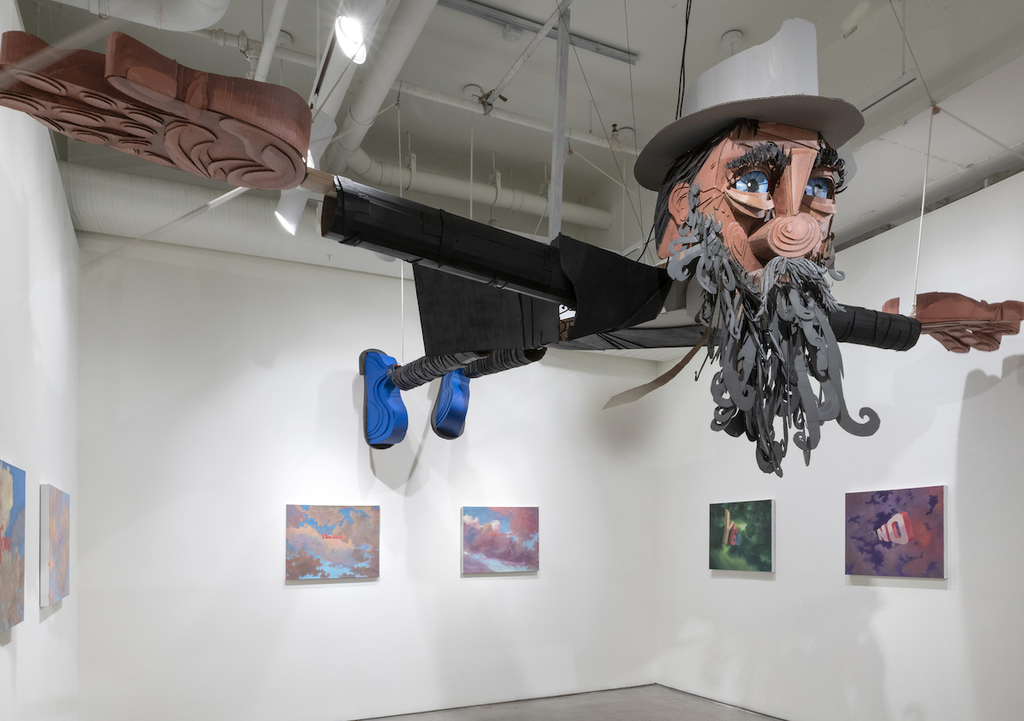 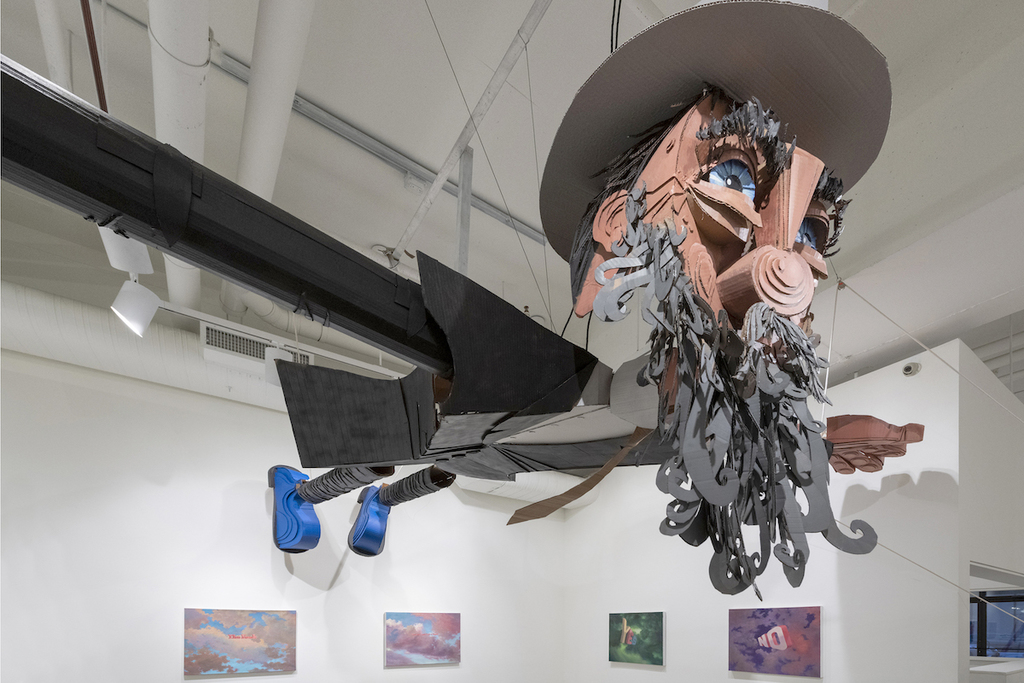 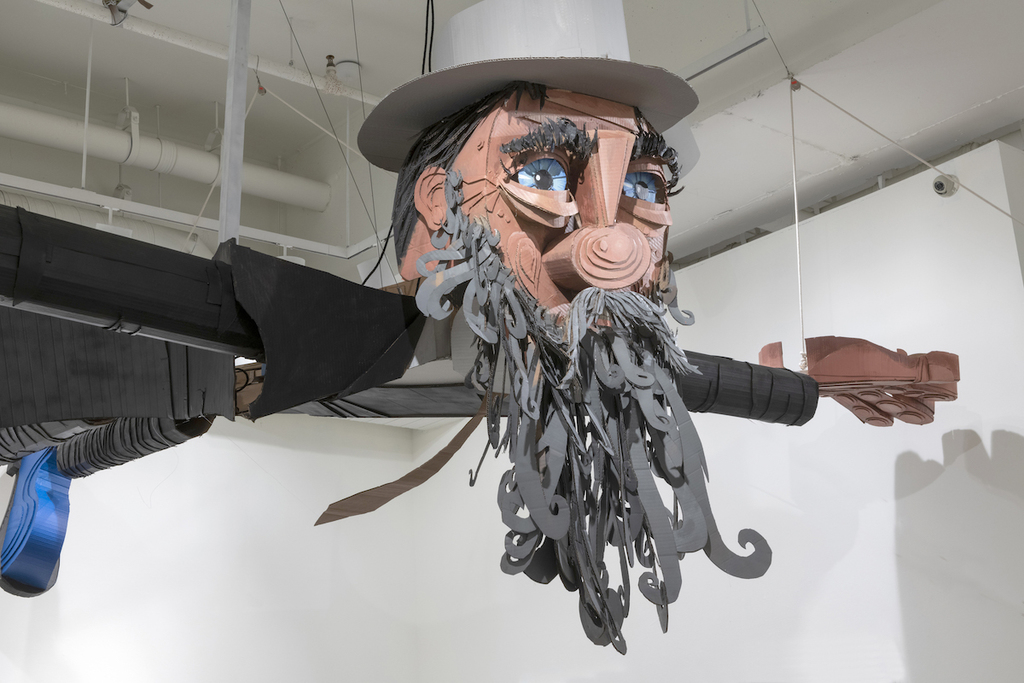 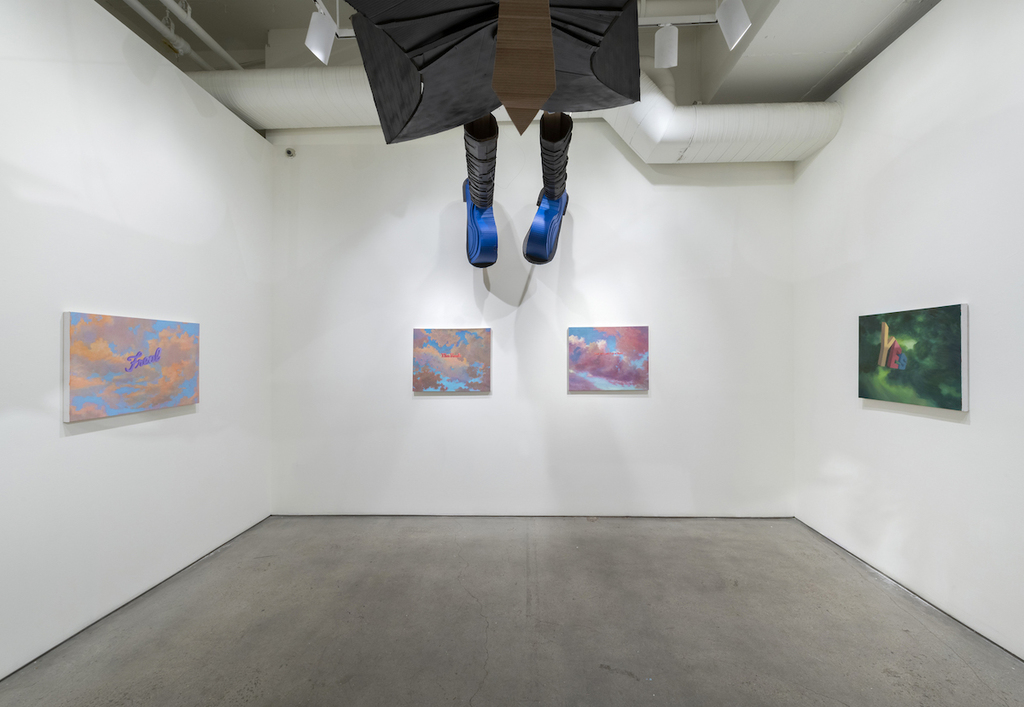 Joshua Liner Gallery is thrilled to announce Wayne White’s fourth solo exhibition with the gallery, I DON’T KNOW. The Los Angeles based artist will present new word paintings that feature hand painted backgrounds, laser cut word reliefs, and an oversized kinetic puppet. I DON’T KNOW will open on January 9 and remain on view through February 8, 2020. The artist will attend the opening reception.

Over the past thirty-five years, Wayne White has infused humor into all facets of his creative career as an artist, art director, illustrator, and puppeteer. As the artist states, “Humor is underrated. It’s seen lesser than drama, but it’s more important. Humor is probably our most sacred quality. Because without it, we’re dead.” In the 2000s, White merged his adoration for history and humor by integrating anachronistic text and phrases onto offset vintage lithographs, playfully incorporating the lettering into bucolic landscapes and seascapes. Aptly named word paintings, this body of work utilizes text to address vanity, ego, and the artist’s memories of the South. As White explains, “The found landscape prints are used in the spirit of found object collage. They are empty stages for my typographic dramas. They are the American background.”

I DON’T KNOW showcases White’s recent word paintings, which mark a new direction for this beloved series. As framed vintage lithographs get more difficult to source, White is starting to adapt his practice to accommodate this shortage by making word paintings entirely by hand. Creating his own backgrounds allows White to explore specific subjects and gives him total control with how the text and background interact with one another. In 2019, the artist started creating acrylic on canvas and oil on linen cloudscapes reminiscent of John Constable and Maxfield Parrish, adding text overtop ethereal sunsets. These canvases continue to reflect White’s sardonic wit, while simultaneously revealing his vulnerable side, evident in his conscious decision to adorn the hand painted backgrounds of sunsets with text that reads “Finally Got There Wasn’t So Great” and “I DON’T KNOW,” adding a particularly somber tone to the exhibition.

Continuing with the sky theme, I DON’T KNOW also includes a ten-foot long cardboard effigy of White suspended from the ceiling of the back gallery. This larger than life puppet flaps his arms, as if he is flying through the air.

Born in 1957 in Chattanooga, Tennessee, Wayne White currently lives and works in Los Angeles, California. Many are familiar with White’s work from the iconic 1980s television show Pee-wee’s Playhouse, earning the artist three Emmy Awards for production design. White is also noted for his work on music videos, such as, Peter Gabriel’s “Big Time” and The Smashing Pumpkins’ “Tonight, Tonight.” More recently, his extensive career was chronicled in the 2012 feature-length documentary, Beauty is Embarrassing, directed by Neil Berkeley. In 2013, following the success of the documentary, White presented “You’re Supposed to Act All Impressed,” a TED Talk on his work and career as a fine artist. The artist’s work is included in numerous public institutions and esteemed collections, such as The New Museum of Contemporary Art, New York, NY; Bunker Artspace, The Collection of Beth Rudin DeWoody, Palm Beach, FL; Country Music Hall of Fame and Museum, Nashville, TN; The Detroit Institute of the Arts, Detroit, MI; Frederick R. Weisman Art Foundation, Los Angeles, CA; The Progressive Art Collection, Mayfield Village, OH; and Laguna Art Museum, Laguna Beach, CA.