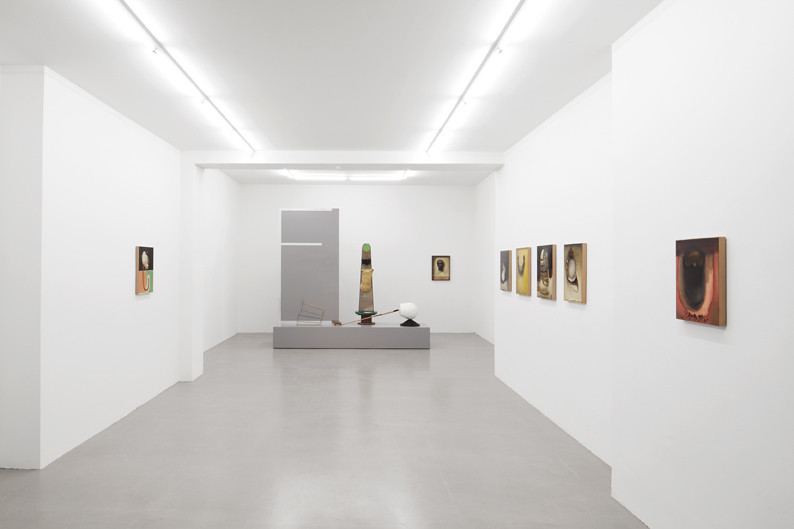 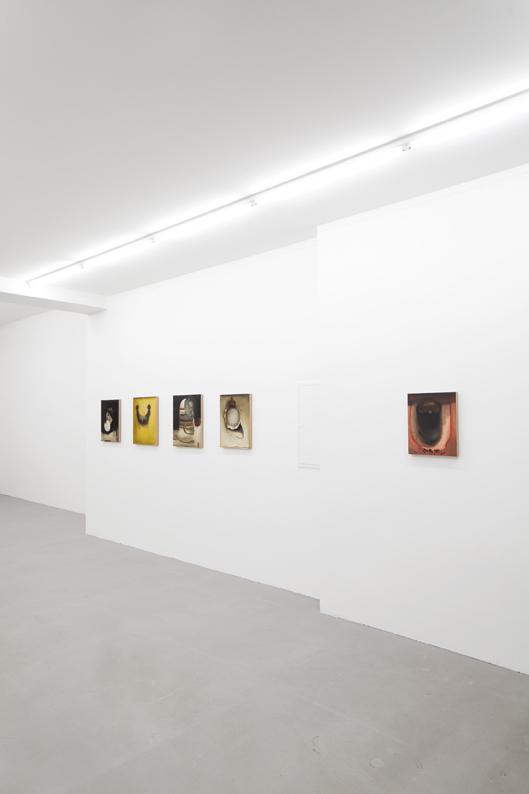 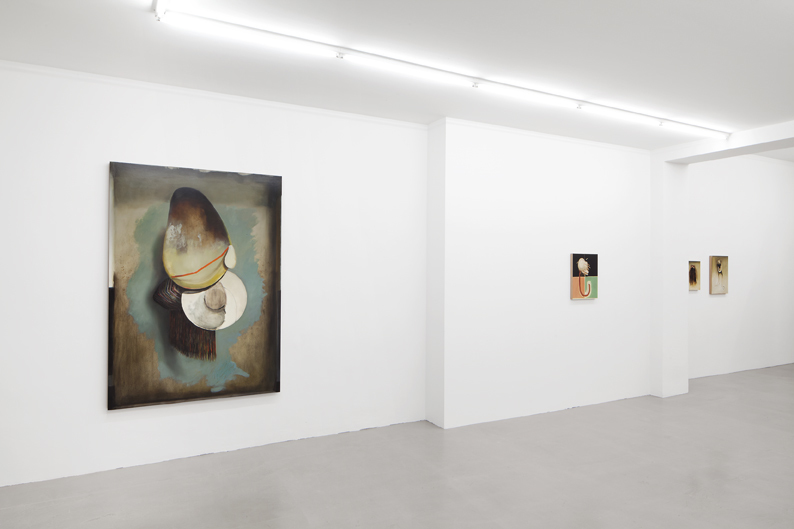 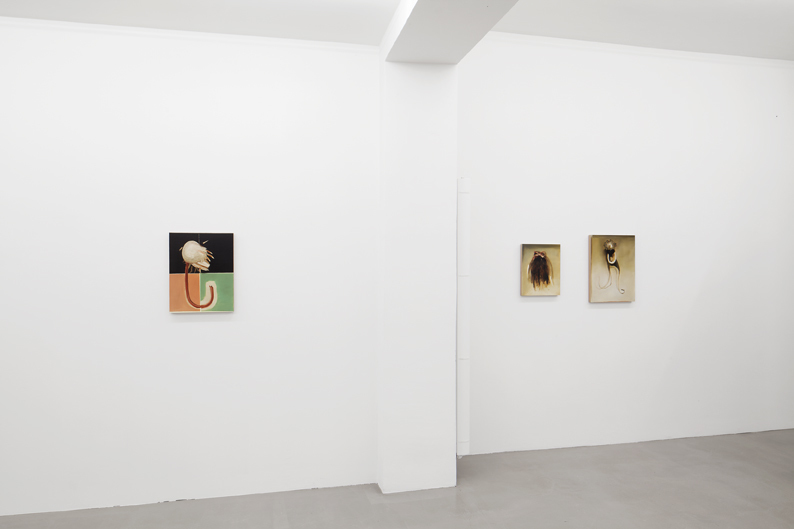 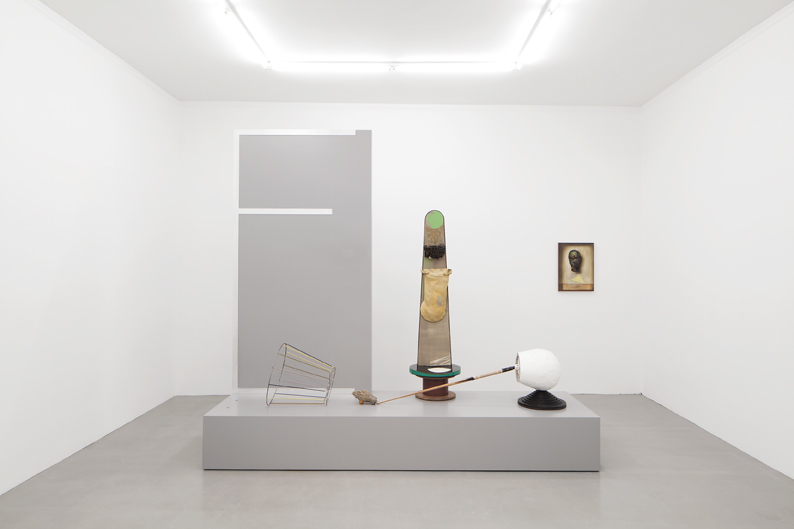 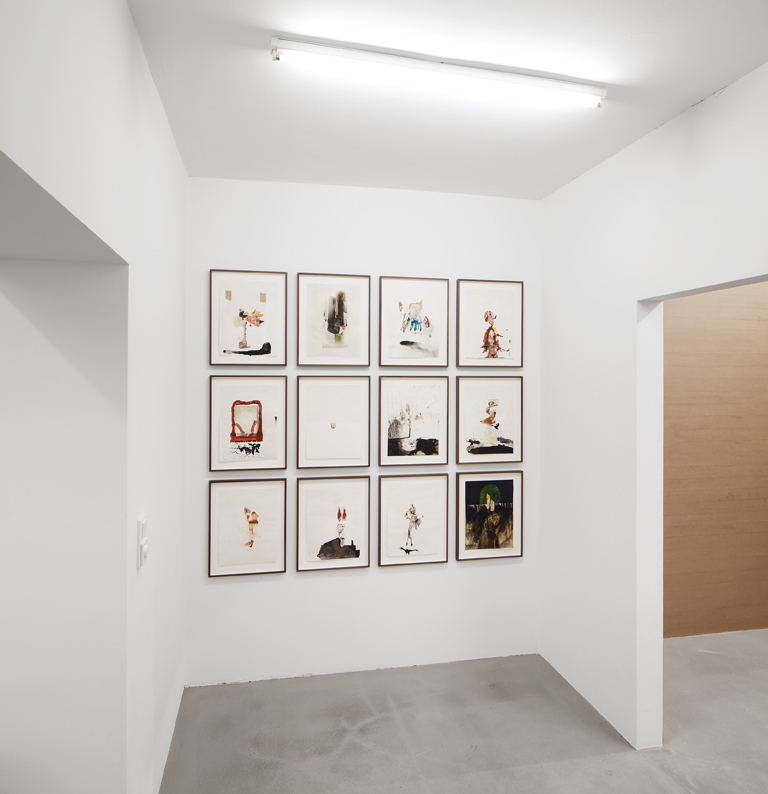 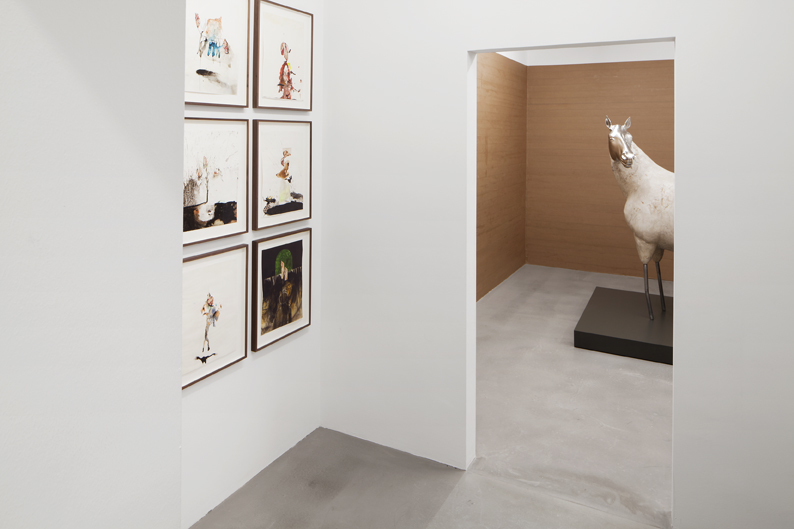 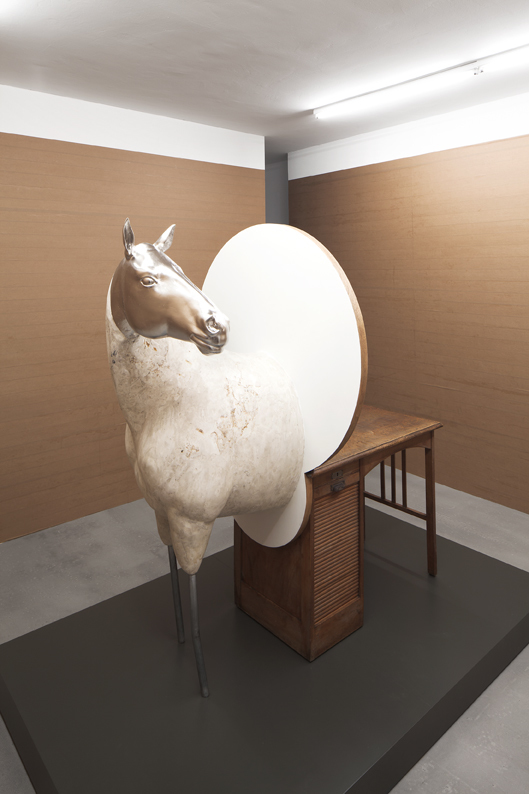 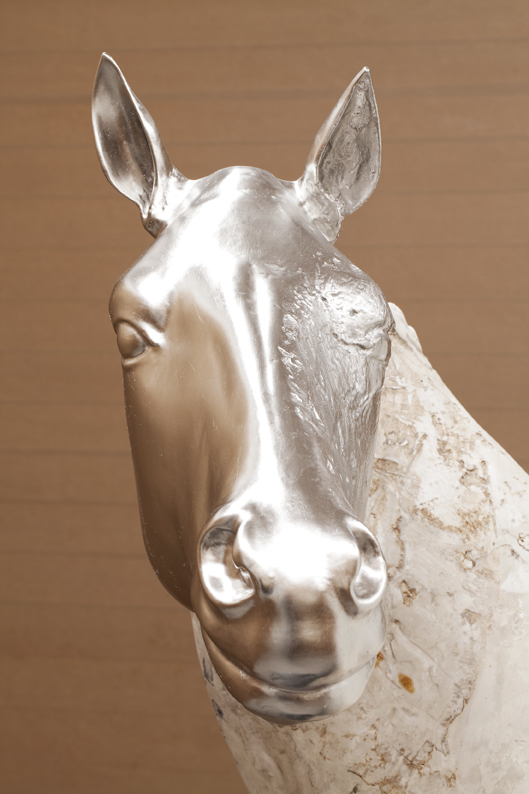 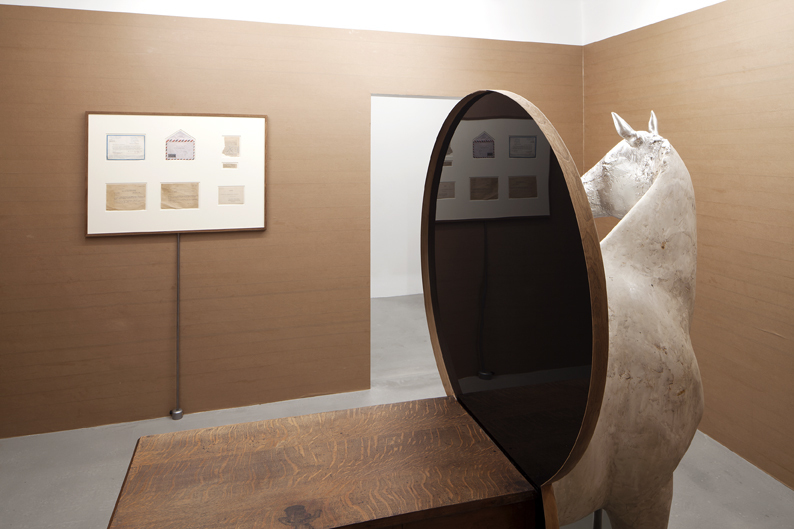 If one is only familiar with Benedikt Hipps early artworks, one will perhaps be surprised by this exhibition. While paintings with enigmatic stage situations in front of dark backgrounds were initially the main part of his work, what we now see is a more complex and variegated itinerary with small-format paintings in bright colours, drawings with embedded collages and installation-like arrangements of elements such as sculptures, ready-mades and objets trouvés. A metal linkage meets a bronze cast of two hands meets a golden, sack-like structure meets a stereometric structure of forms meets cheap plastic flowers (room 1), in the next room a silvered horses head grows from a 1930s desk like a feral reliquary (room 2). These are bizarre assemblages of found and made-up objects whose syntax suggests a narration and that can be analysed in analogy to parts of a sentence. But the meaning of this narration vaporises in the inner world of the images and artefacts. Hipp is not a linguist with a propensity for art but a phenomenologist conducting visual studies with pictorial means, so to speak. The faceless figures typical of his work, which we also encounter in the paintings of this exhibition, are therefore no identification figures for the beholders but in-dentification figures. They exacerbate projective contemplation, refer to the imagery of the picture and thus cast the viewers back to themselves, to their own situation, their own body. And where there is the body, there is flesh.

A further novelty is that Hipp, in his series Großes Fleischopfer (room 1) presents drawings reminiscent of votive depictions in which pieces of raw flesh flash like sparks. And yet it is not really surprising if one brings to mind Hipps fascination with the inner worlds and entelechy of the pictures. Their virtual worlds are only possible as long as a viewer of flesh and blood stands before them; a living being that perceives the iconic difference (Gottfried Boehm), meaning the virtuality of the picture objects, as such. But the matter is a bit more complicated. For the human, in his vanity, recognises the pictures as pictures only because he himself is already  a picture. He bears the iconic difference within himself, indeed in the sense of the Christian creation myth, in which, as is well known, God succeeds as the first bio-artist.

Since the trans-iconic experiments of the Almighty, man inevitably had to count as empirical-transcendental duplicate (Michel Foucault), as di-vidual composed of concrete matter and abstract form  or vice versa. Precisely in this sense, the pictures are also physical things constantly transcending their own flesh and revealing something that they themselves are not. It is pointless to seek to connect with them by searching for mimetic counterparts of our selves in them. Viewing the picture as such is essentially a deeply narcissistic affair, mental masturbation, as it were  to freely adapt Kurt Tucholsky: Man consists of bones, flesh, blood, saliva, cells and vanity. We identify the same via differentiation and what is different via the creation of analogies. The monotheist ban on image worship is de facto a ban on self-image worship. In this respect, the entelechy of the pictures is paradoxically fed by a code of law of foreign judges.

Now, when Hipp  like at a phenomenological-hermeneutic barbecue  places the meat on the grillage of colour and line, it is not to refer to the alleged other of the pictures, to life, to blood, to energy, to the body  just as little as the secession of his picture objects in the third dimension, which has been a common feature of his work since a few years, is a departure from his pictorial and visual studies approach. In the context of his works and interests until now, the new series instead suggests that the flesh has always already been in the image and abstract, just like the pictures have always already been in need of embodiment. Consequently, the pieces of flesh in Hipps work naturally appear as elements of abstract compositions. That we all are meat, as Francis Bacon once succinctly stated (we are meat), is a theological truism ever since the Gospel of John. Yet one would have to supplement the epochal sentence and the Word was made flesh with: And the flesh was made an image  and perhaps comment in a footnote that language is also intrinsically pictorial, namely, metaphoric per se. Even if the most radical materialists describe themselves as only-flesh, what speaks to us here is a flesh describing itself as only-flesh and reflecting in an eidetic way upon itself, a paradoxical flesh, then, that negates its immaterial side just like the pictures, in a reverse symmetrical manner, negate their material side in the act of perception.