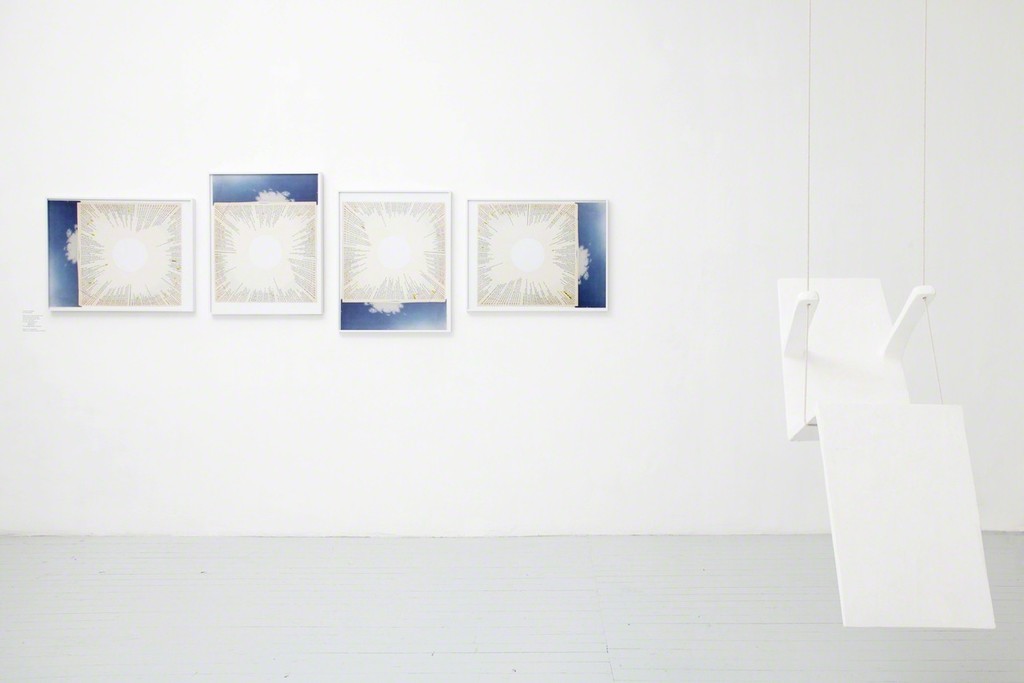 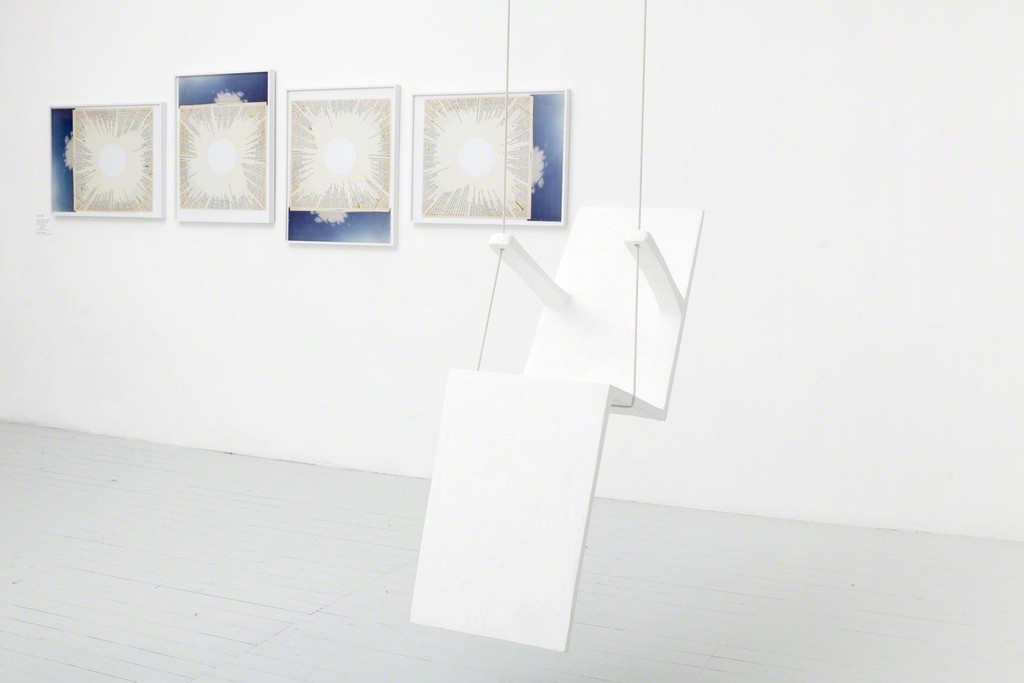 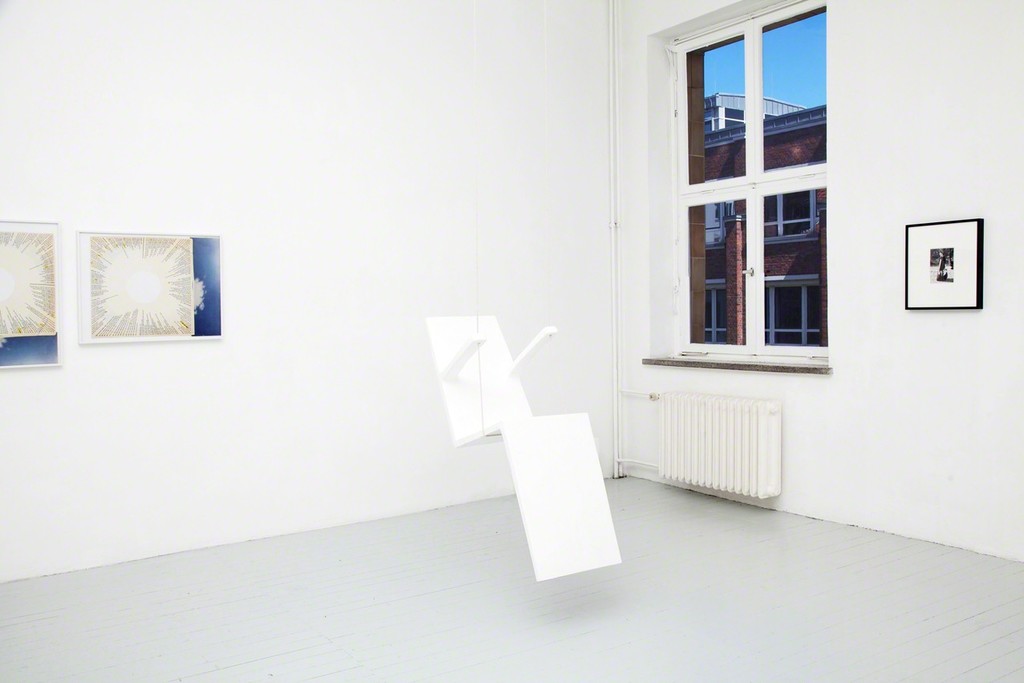 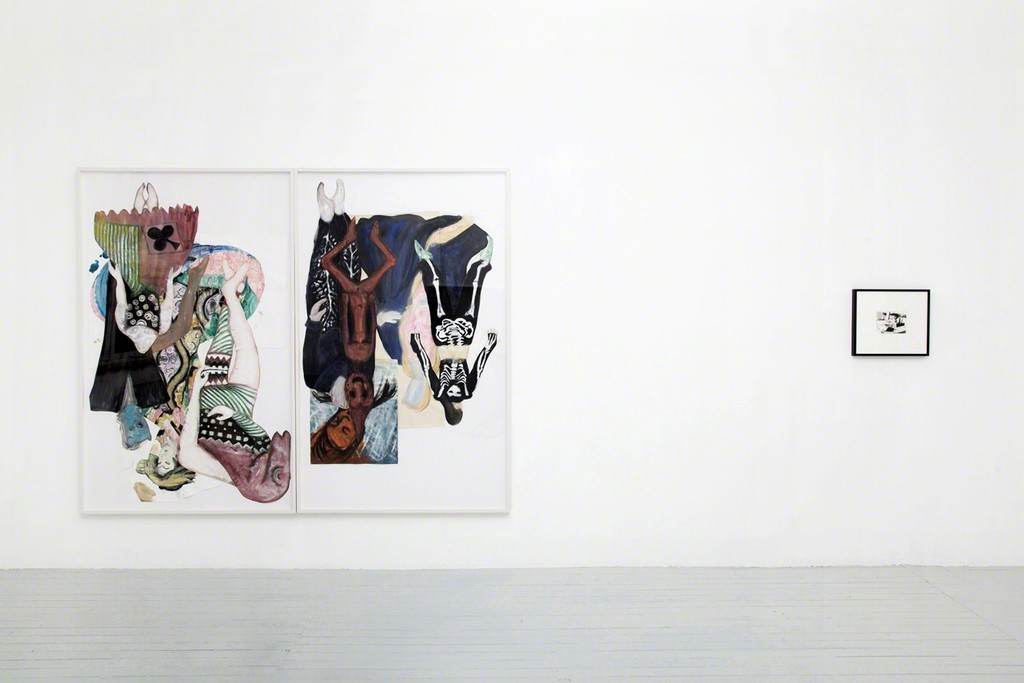 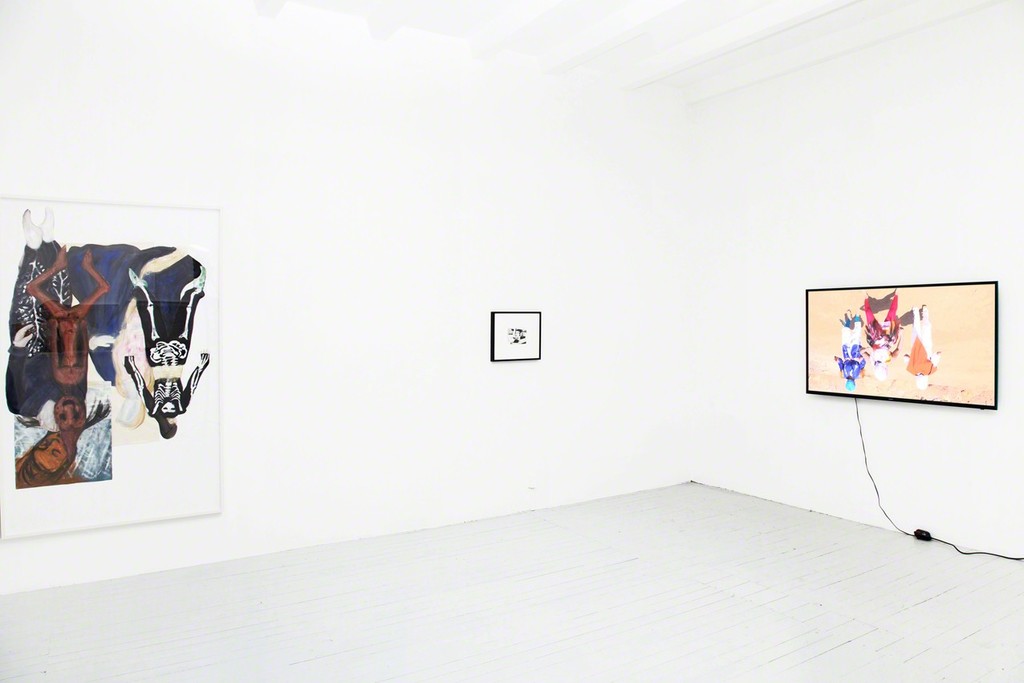 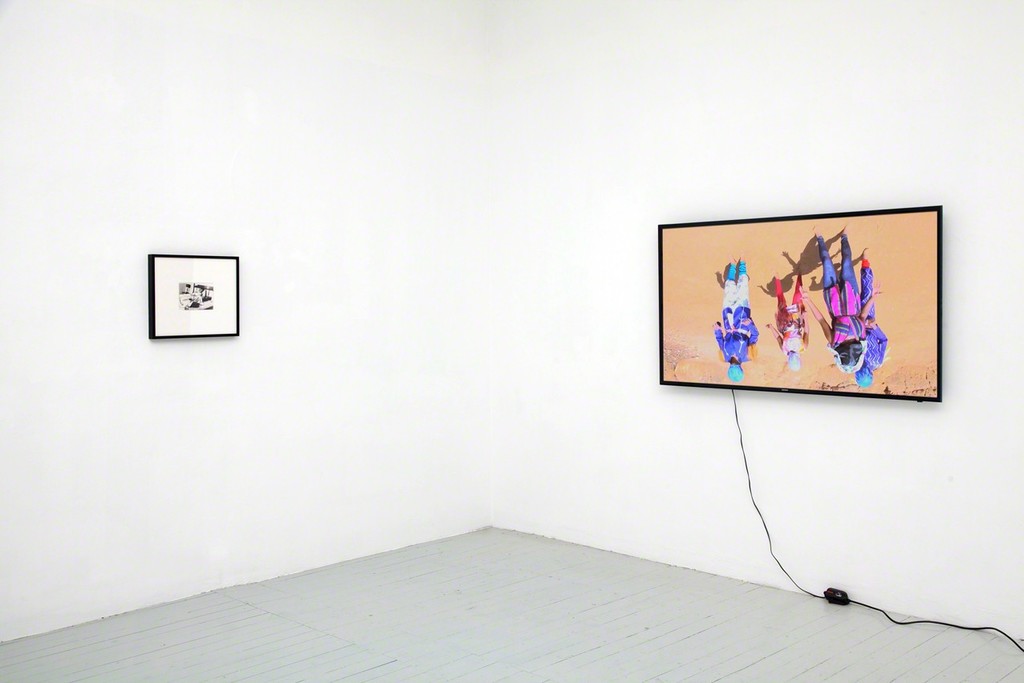 Ketty La Rocca (19381976) ranked among the most important proponents of Conceptual and Body Art in Italy in the 1960s and 70s. Based on a visual poetry, she radically dealt with the sociopolitical limits of the meaning of language and images in her collages, performances and photographs. A central aspect is the examination of the bodily gesture as an "original means of communication. The definition of the border between the self and the other as "you" is central to La Rocca's work. La Rocca's typographical sculptures "I" and "Virgole e Punti (Commas and Periods)" transfer this play of identity as "sculptural punctuation" to the real space.

It must first be said that despite or perhaps because of her early death in 1976, Ketty La Rocca created an oeuvre in just ten years, whose relevance for contemporary art is uncontested among the expert audience. Her works are included in renowned collections such as the Museum of Contemporary Art in Los Angeles, the Centre Pompidou, Galleria Nazionale d´Arte Moderna Roma, Museum Ostwall in Dortmund or the Galleria degli Uffizi in Florence. Already during her lifetime and until this day, her works have been on view in institutions such as the Biennale di Venezia (1972), the Camden Arts Centre London (1972), the Museum Ostwall (1974), the Fotomuseum Winterthur (1987), the Galerie im Taxispalais Innsbruck (2003), the MoMA/PS1 New York (2007), the Albertina in Vienna (2012), Kunsthalle Baden-Baden (2015), Kunsthalle Hamburg (2015), Kunstmuseum Krefeld (2016) or La Virreina in Barcelona (2017).

In Mathilde Rosier's films, performances, installations and paintings, stories are formulated by dance and music. However, sound, bodily gestures and symbolic motifs narrate without words, so
that the stories elude rational descriptions. Mathilde Rosier departs from the secure terrain of verbal rationality in her work and moves toward an understanding of the world through bodily experience.
Rosiers works have become known through international exhibitions. Solo shows and performances have been presented at the Museum Jeu de Paume Paris (curated by Elena Filipovic), the Camden Arts Center London, the Serpentine Gallery London, the Kunstverein Hannover, and the Kunst Institut Basel (curated by Chus Martinez), and others. Her works are included in the collections of the Kadist Foundation and the Museum Abteiberg.
Mathilde Rosier's film "Loose Alphabet" and the painting "In Revolution (the Alphabet)" were created in Marthare, Kenya. Upon the invitation of the Razem Pamoja Foundation, which runs an exhibition space in the local slum, Rosier produced costumes in collaboration with local tailors that were then worn by local dancers for the performance. Works from this series were subsequently displayed in Mathilde Rosier's solo exhibition at the Kunst Institut Basel, Switzerland, in June 2016. On this occasion, the curator Chus Martinez issued a publication with Sternberg Press.
The film "Loose Alphabet" and the painting "In Revolution (the Alphabet)" play with our collective knowledge of cultural symbols and narrations that are literally turned "upside down". In both the film and the painting, the dancers stand on their heads. Mathilde Rosier says: Every figurative image tents to tell a story and every costume carries also a narration for the body which wears it. Upside down, the power of the image and the power of the costume do not rely anymore on the representation, it quickly becomes abstract. According to neurosciences, the analytical brain, or the "verbal" brain, cannot sustain an upside down image too long, it has to pass on the task to the intuitive part of the brain which can deal with the information. For the upside down image to be accepted, we have to give up the will to grasp it intellectually. So, confronted to an upside down representation, the intellect is silent. And this is what I want to reach in the viewer. By working with upside down images, there happens a renouncing of representation as a form of narration. It is like a short story that does not make sense, that one can only understand when one gives up the will to understand.

Inge Mahn (DE 1943) is a path-breaking artist of "Social Sculpture". Her work has influenced several generations of young artists. Inge Mahns sculptures restate the world of everyday objects as pictorial projections since the 1970s. Her sculptures are based on acute observations of fundamental interpersonal actions and their social context. The materiality of white plaster and the altered scales detach Mahn's motifs from their original functionality. Her works are subversive "gestalts" communicating to the outside what is tacit, excluded, worrying, and weird. Die Schaukel (The Swing), 1978, is one of Inge Mahn's most remarkable pieces of the group of chairs revealing the potential of human interactions. As a playful site of observation, it hangs slightly higher and eludes the "dominating" order "down there". It appears singular, while simultaneously offering one to "take a seat". With the "load" of the second "vis-a-vis", it begins to sway, but ultimately returns to a secure balance.

In 1972 Inge Mahn already participated in the documenta 5 curated by Harald Szeemann, right after her studies with Joseph Beuys. Renowned museums have dedicated solo exhibitions to her such as Tranegarden Kopenhagen (1976), Kunstmuseum Düsseldorf (1980), PS 1 New York (1981), Lenbachhaus München (1983), Künstlerhaus Bethanien Berlin (1985) or Württembergischer Kunstverein Stuttgart (1990) or Kunstverein Braunschweig and K21 Kunstsammlung Norrhein-Westfalen Düsseldorf (both 2017). Her sculptures are included in collections such as at Hamburger Bahnhof Berlin, Kunsthalle Helsinki or Kunstmuseum Düsseldorf.

Natalie Czech's conceptual photography literally "curates" existing images and texts, placing them in a dialogue with each other. The simultaneous acts of "reading" and "viewing" reveal the complexity of interpreting the meaning of what one believes "to see or understand". The new works of Poems by Repetition are a continuation of the series she began with in 2013 and now also subtly play with the interpretation of icons, symbols, slogans and existing poems of the 21st and 20th century, which are characterized by the stylistic principle of repetition. On packages and product specifications of electronic goods, album covers and advertising articles, Natalie Czech "finds" poems by Vsevolod Nekrasov, Charles Bernstein or Tom Raworth and makes them "readable" through markings. The methods of photographic reproduction employed by Natalie Czech resemble the rhetorical repetitions used by the poets. Czech translates the specific type of repetition of the respective poem into a number of individual photographs comprising the work. She photographs the source images several times, either with altered details, exposure times or format sizes. The poems made visible by the markings not only relate to the surrounding original text and the product itself, they also enter into a playful, associative dialogue with the originally depicted symbols, icons, and slogans, and their supposed meaning.

Natalie Czech's artworks are represented in institutional collections including the Pinakothek der Moderne Munich, the Fotomuseum Winterthur and the MoMA New York, and have been presented to an international audience in her solo shows Heidelberger Kunstverein (2017), CRAC d'Alsace (2016), the Palais de Tokyo Paris (2014), Kunstverein Hamburg ( 2013) or Ludlow 38 New York (2012). Her works have been included in renowned international exhibitions such as "Art and Alphabet", at Kunsthalle Hamburg (2017), "New Photography" at the Museum of Modern Art in New York (2015/16) or "No Man's Land", Rubell Family Collection (2015), amongst others.