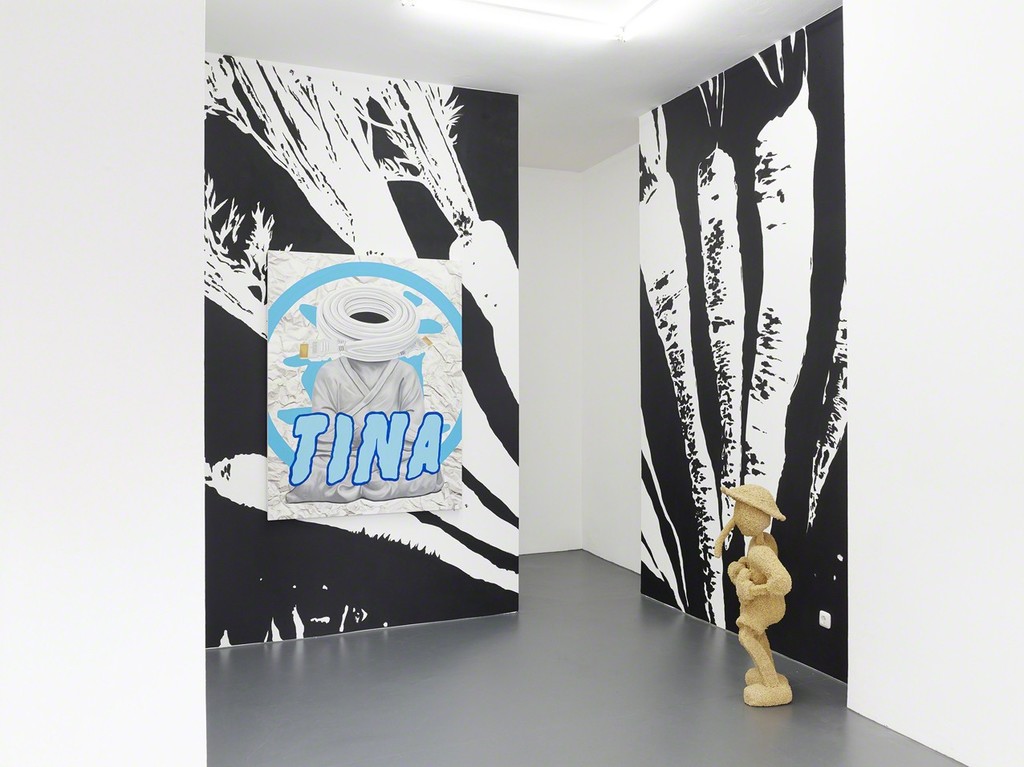 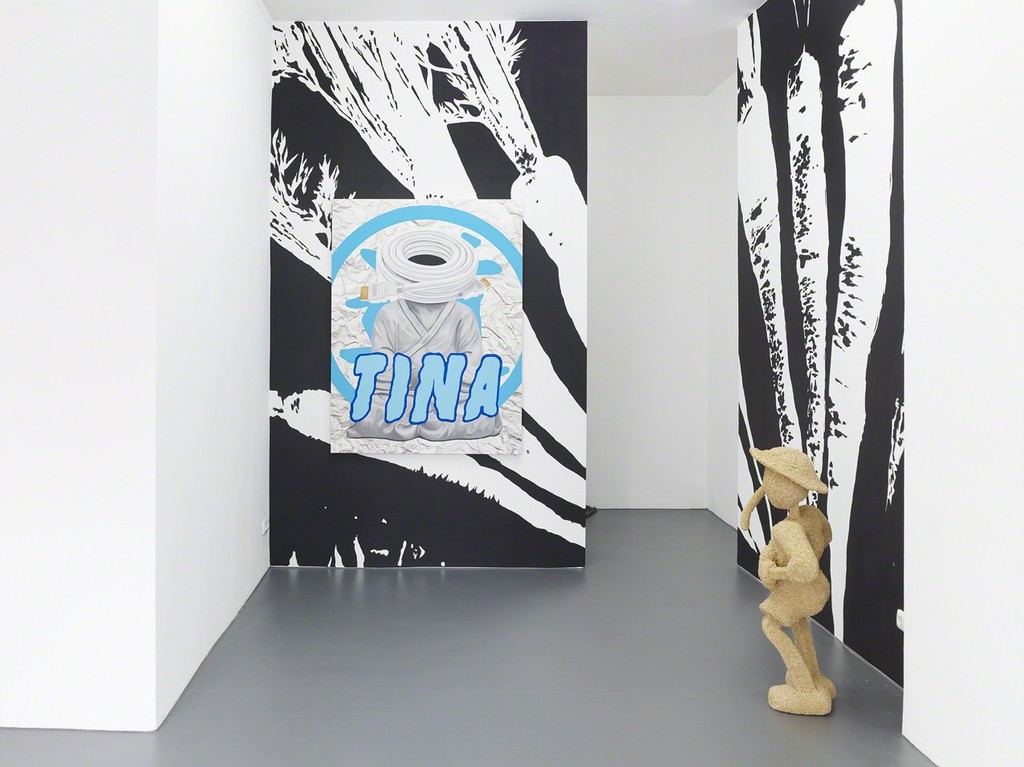 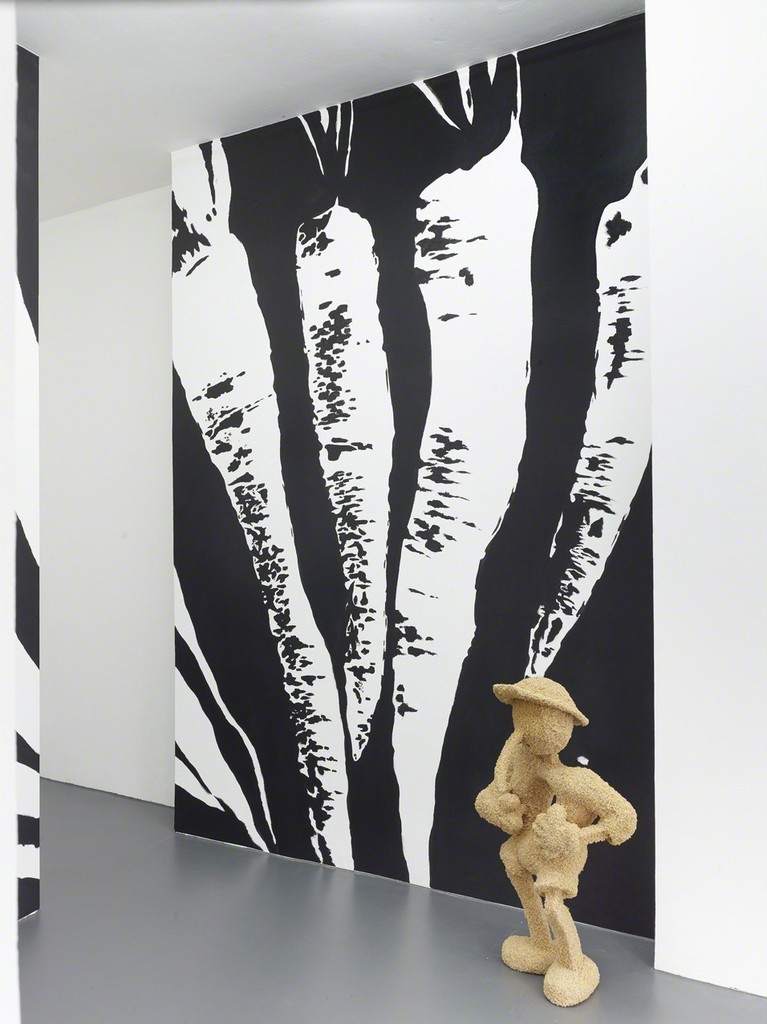 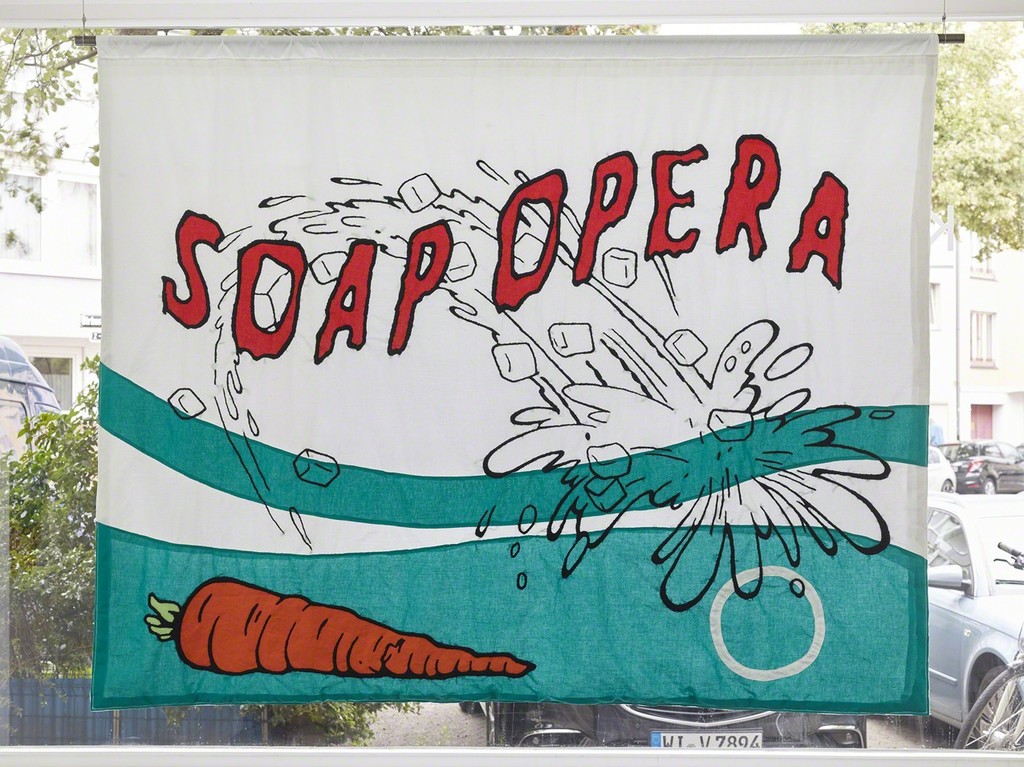 Fragmentary appropriations of everyday culture, art history, and politics are brought together to form a conglomerate of open narrations and meanings in Yoan Mudrys collages, objects, and in situ pieces. His works are hybrids between familiar imageries and disturbing "mash-ups". On the one hand, they reflect the numerous impressions of a "digital native", but on the other, they also remind the viewer of a rhizomatic network that dissolves hierarchies, calls existing codes and structures into question, and places them in a new context.

The title of the show serves as an associative metaphor of Mudrys working method: The artist slips into the role of a storyteller, confronting us with a large amount of intermingled information, without clearly defining a beginning or end. He calls the characters of his soap opera "Kevin" or "Tina", common and banal names of his generation. Yet a second reading must also be considered in order to understand Mudrys complex work: "TINA" written in a comic font on the painting "When Maggie met Steve" refers to the so-called TINA principle ("There is no alternative"), a slogan used by Margaret Thatcher to legitimize her policies. The acronym floats in front of a figure sitting in prayer; instead of a head it wears a turban made of a rolled-up HDMI cable. Mudrys bricolage technique is thought-provoking and always implies a humorous component.

His sculpture entitled "Kevin" for instance, satirizes the Disney character Pinocchio, which he forms out of alphabet noodles. Like Pinocchio, they are an anecdote of his childhood. But they are also a cheap, industrially manufactured product reminiscent of the materials used by Arte Povera. Seemingly outdated styles and influences are reprocessed and attain a new level of meaning in the context of "Generation Y": Little "Kevin" has a hole in his stomach. He has literally lost his words.

Empty surfaces and holes are recurring elements in Mudrys "Soap Opera" that possess a narrative potential. Their "filling" counterpart can be found in the oversized carrots of the wall painting and on the banner, the front side of which can only be seen from outside the exhibition space. Both site-specific works play with motifs of Pop Art, including citations of the Coca Cola and Aspirin logos, while the charged gesture of raising flags relates a different story.

Mudry consistently adheres to the principle of (re)appropriation in his creative process. The models are first created in Photoshop and then traditionally painted on canvas or embroidered on fabric by hand.

The linking of tradition and new technologies also characterizes the performative installation of Italian coffee machines singing a song against work. Progress and production, post-Internet art and other trends in the contemporary art scene are caricatured with a wink. The coffee machines sing the song of a soap opera that factually depicts our reality and is constantly called into question by Yoan Mudry.

Yoan Mudry (CH 1990) lives and works in Geneva. In 2014 he completed his studies of visual art at the Haute école d'art et design de Genève (HEAD). Solo exhibitions at Nicolas Krupp (Dirty like a smiling fish, 2014) and Marbriers 4, Geneva. His works have also been on view in group exhibitions at, among others, Kunsthalle Freiburg (Fri Art), the Astrup Fearnley Museum in Oslo, the Pace Gallery in London, and New Jerseyy in Basel.