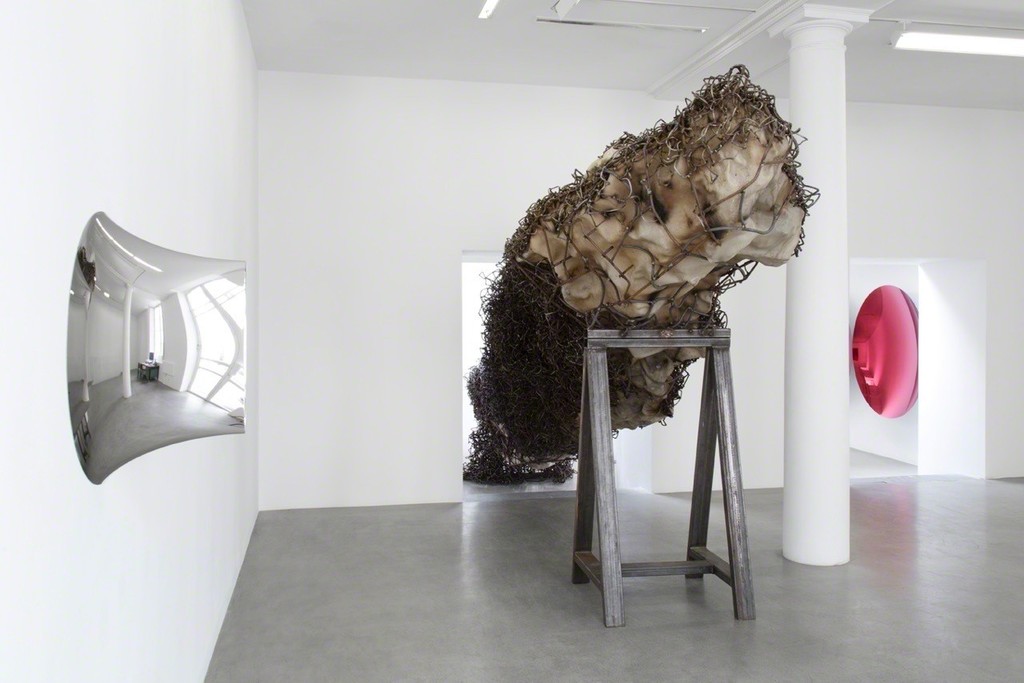 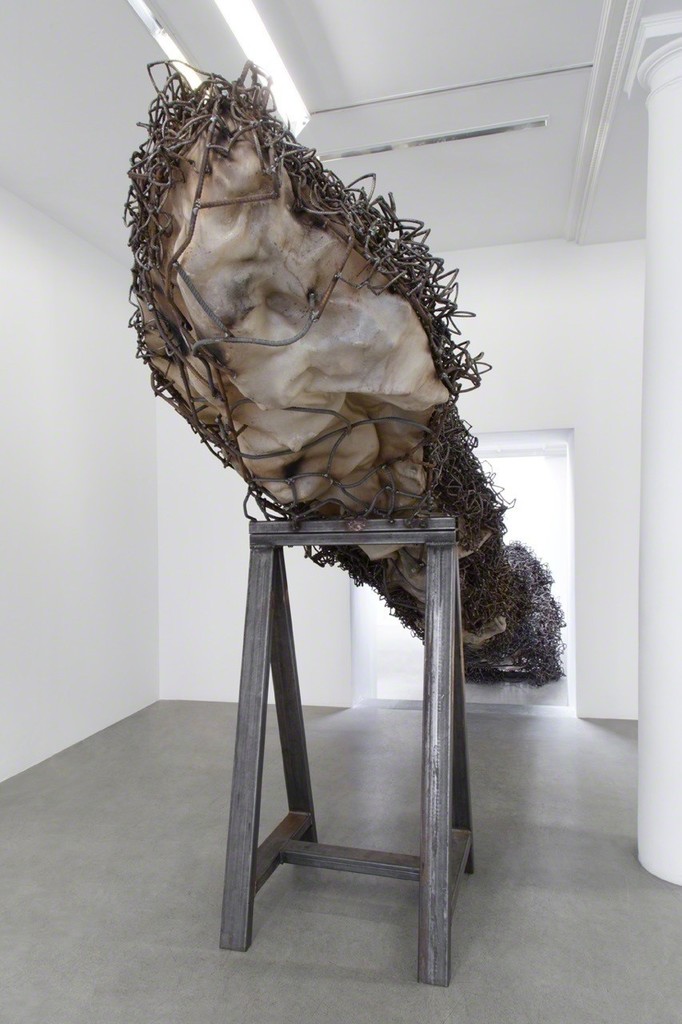 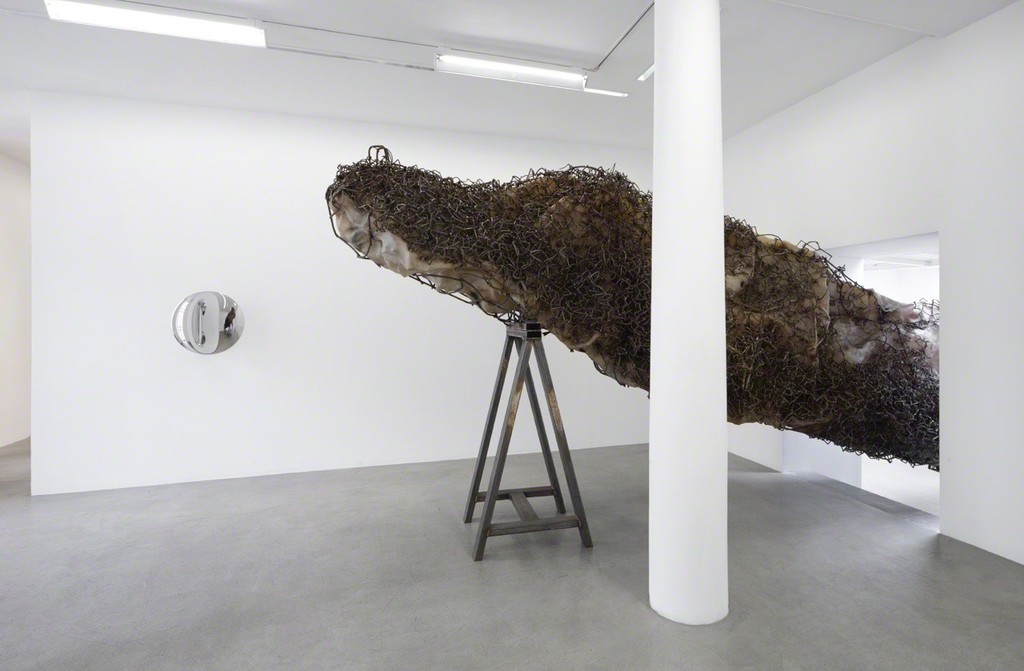 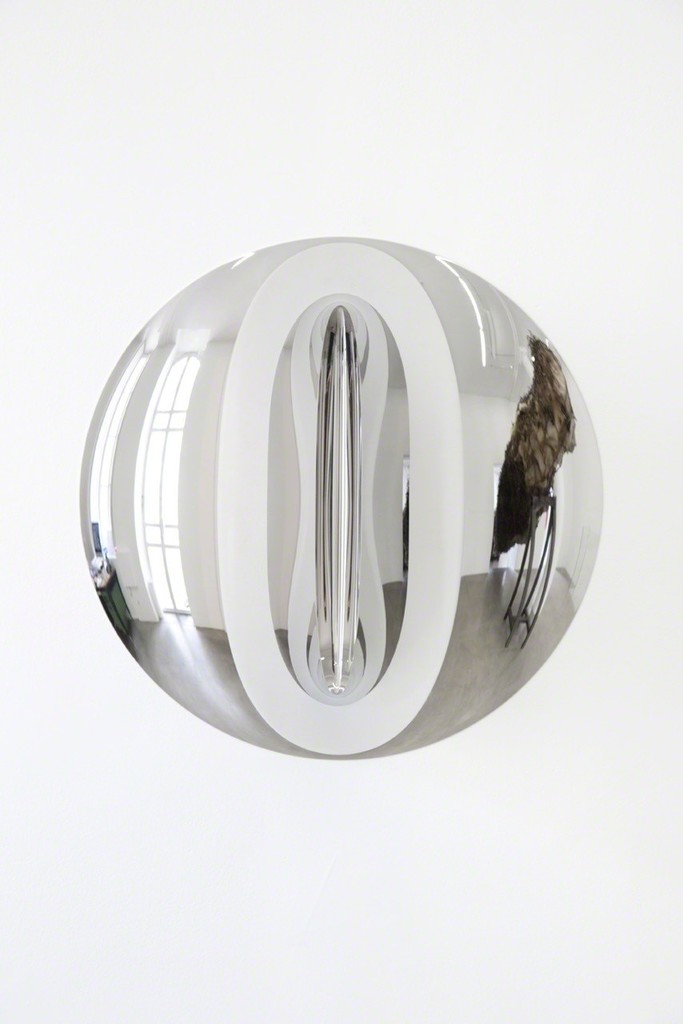 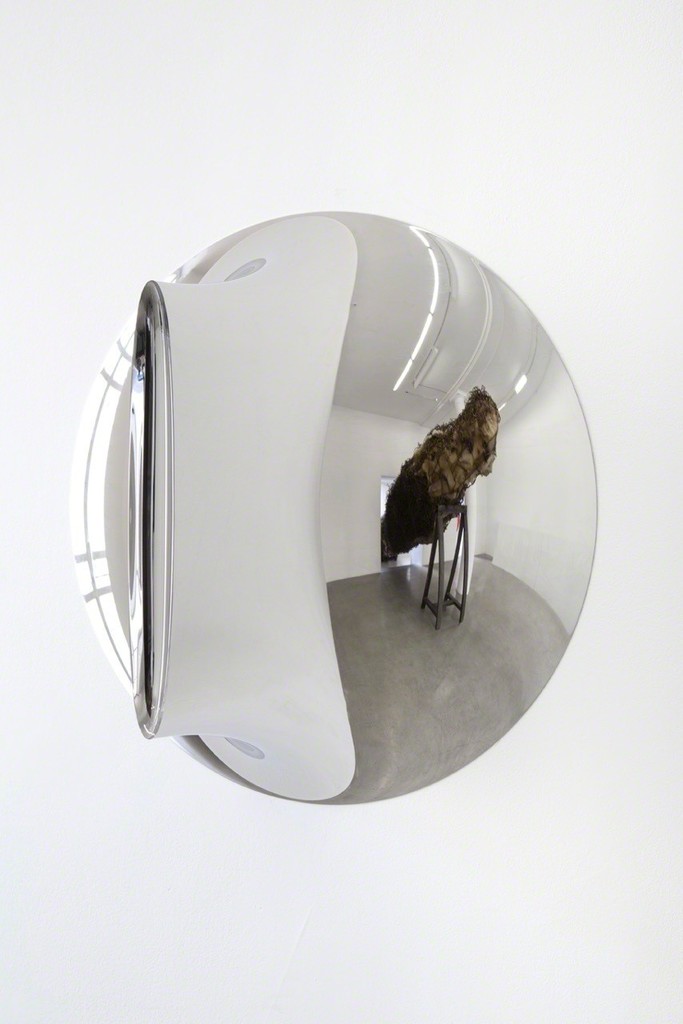 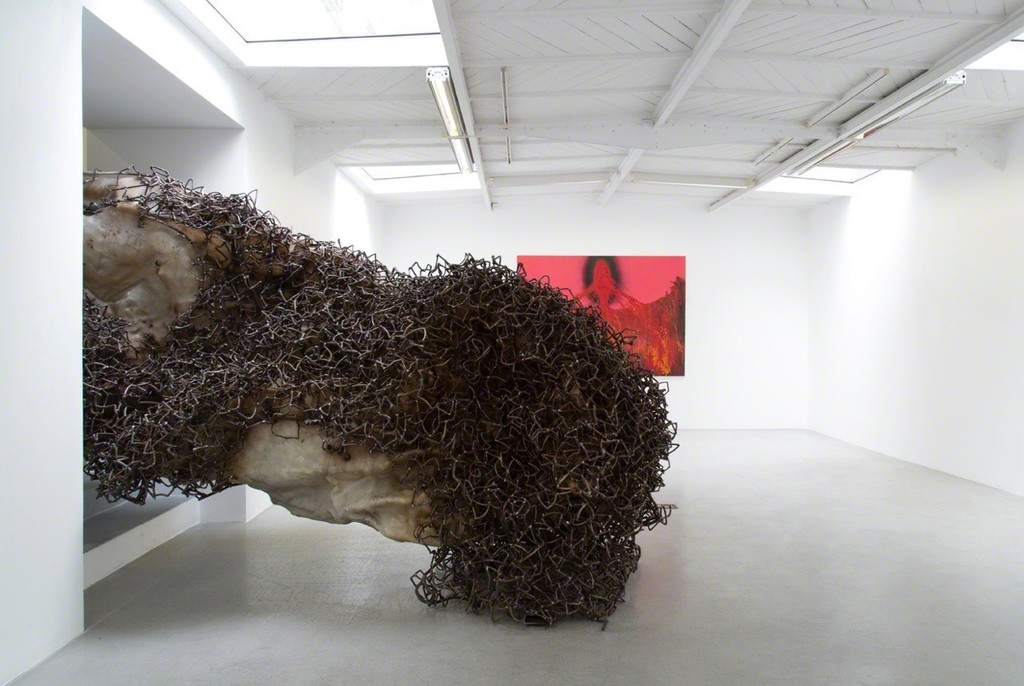 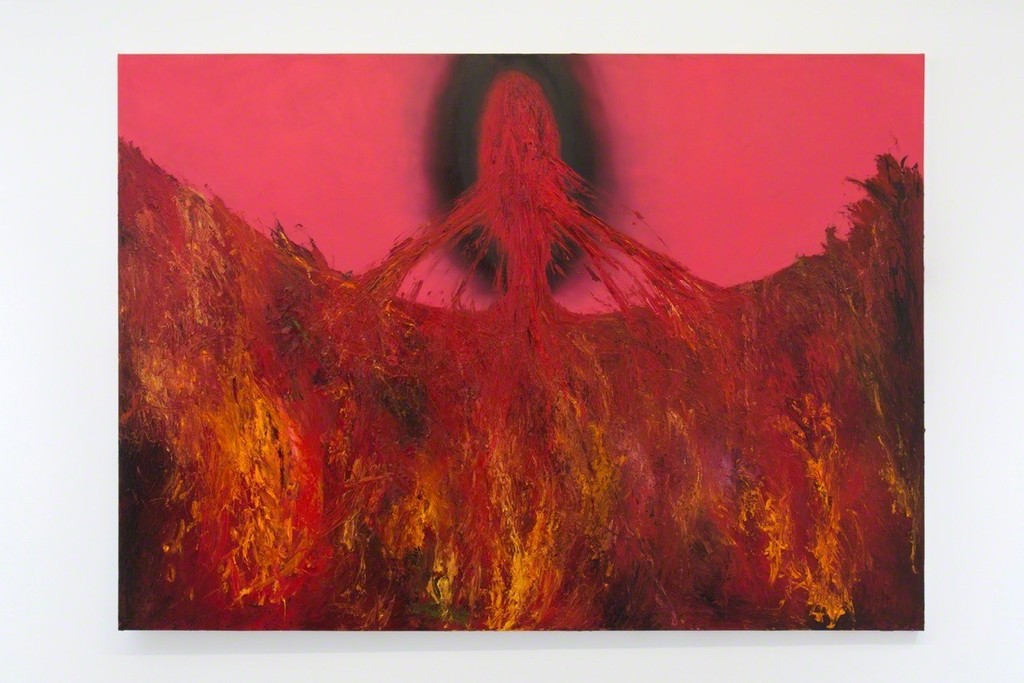 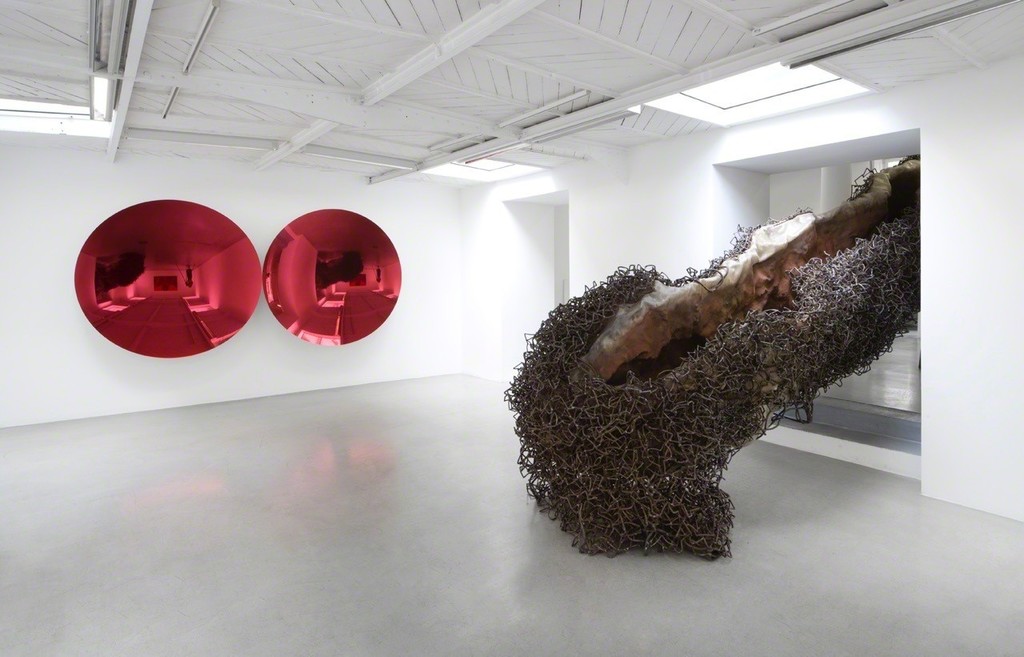 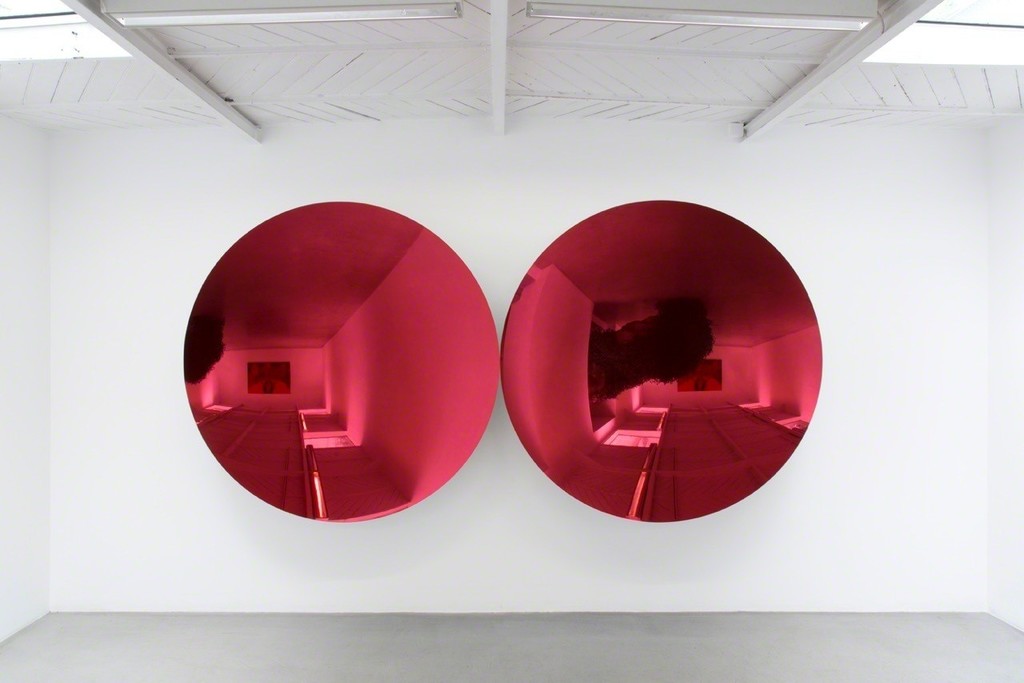 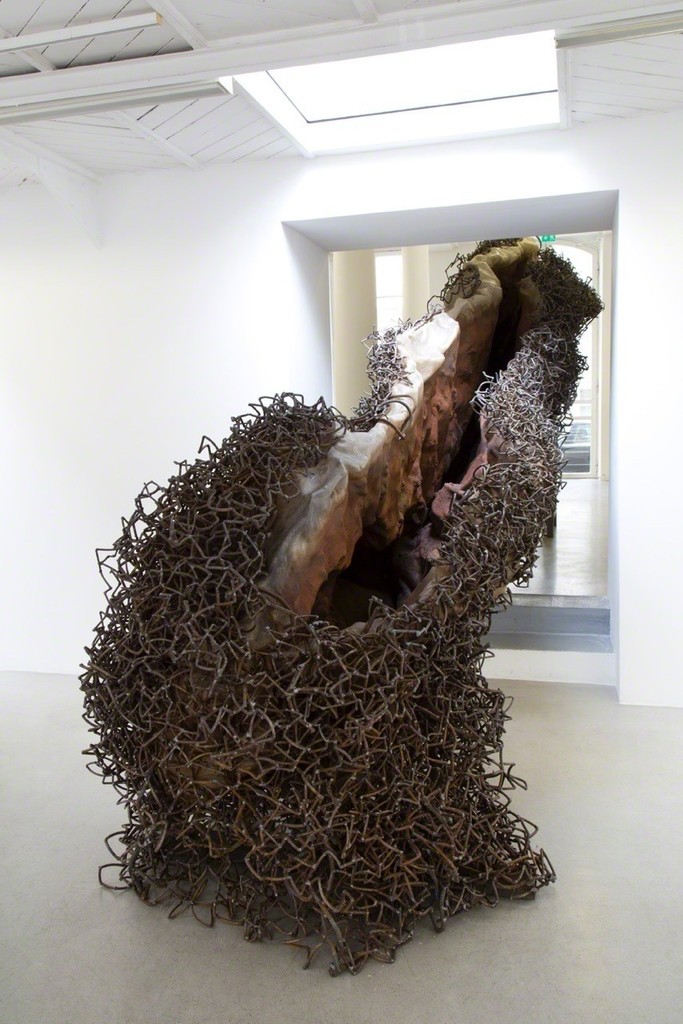 Kamel Mennour is delighted to present a new exhibition of recent works by the renowned British artist, Anish Kapoor.
The exhibition will take place across both the gallery’s Paris spaces. In this, Kapoor’s most visceral exhibition to-date, the artist’s sleek geometric forms and geological materials now disclose an intense sexual and physiological charge. Fresh iterations of the artist’s engagement with process-led series, which often feature new departures in material and form, are charged with a provocative eroticism and the desire, as the artist puts it, “to see the body, shrivelled up in all its naked vomiting nastiness, somehow emerge out of the imposed order of life.”
The works include mirror pieces, in which pairs of the artist’s immaculate concave surfaces are brought together for the first time in corners of the gallery, while others curl up into the form of lipped openings. Lying astride two different rooms, a large floor-standing sculpture, made of exposed welded metal and fibreglass, looks in turn like a munition, decaying felled tree trunk and phallus. A silicone work is set against a wall —in the artist’s words, “an ooze of the semi-described.” There are also two paintings in the surprisingly conventional medium of oil on canvas —a part of the artist’s practice for many years, but one which he has rarely put on public display.
All works reflect Kapoor’s distinctive thematisation of the unfixed nature of objects, as he puts it, “hovering angelically between the physical and the no-thing” – a challenge to the conventional notion of their permanence. Kapoor’s is a world of emergence, metamorphosis, alchemy and entropy. In recent years his sculptures and paintings have become ever more corporeal and animate, a trajectory continued in this exhibition. It is as if his sleek geometric forms have begun to evolve, by some mysterious Darwinian process into messy organs and anatomies; and as if his precisely-incised impenetrable voids have suddenly begun to disgorge what they had previously hidden, a surging mass of the internal body, of entrails and fleshiness. The deep, pungent crimson hue, inevitably evocative of blood, which has dominated Kapoor’s palette in the last decade, is omnipresent in the exhibition.
Anish Kapoor is one of the emblematic artists of our age, leading the re-purposing of the language of Minimalism, which has defined a large area of art practice since the 1980s. Kapoor’s critical innovation has been, put simply, to place minimalism at the service of meaning. Judd, Morris, Le Witt and the first generation of the sixties intended to create art that evaded all meaning, making the work a formal, often typological exercise in shape, material and context.
Like them, Kapoor does not produce the work with meanings in mind, but, unlike them, he recognises they are unavoidable and desirable. As he says “Artists don’t make objects. We are in pursuit of mythology.”1 Kapoor’s primal forms draw into themselves psychoanalytic, sexual, and reproductive dimensions as well as destructive, even apocalyptic forces, and reflect on the experimental nature of the production of art. His development over the past forty years constitutes a project to test and expand the capacity of art to contain meanings. There is even a contemporary political resonance: as he presents us with the ‘nomadism’ he perceives to be inherent in objects, he is reflecting on his own status as the immigrant child of refugees.
Kapoor’s work has always absorbed and alluded to diverse art historical references. So it is surely no coincidence that the selection here conjures up moments from Paris’ own cultural history. The silicone paintings which the artist calls “interior objects”, offer Soutine-like seething expanses of flesh. Kapoor’s resin lips form a vaginal ellipse, or, if viewed sideways, a mouth-with-tongue and eye —a mapping of body-parts, which recalls the Surrealist Georges Bataille. The unstructured informe of Kapoor’s work evokes the post-war School of Paris, while Kapoor’s compression of psychological, political and aesthetic meanings into each work may remind us of the syncretism of Gustave Moreau and the Symbolists, who integrated Classical, Christian and Asian mythology in their imagery.
The Sorbonne historian of science Gaston Bachelard also comes to mind. In his epistemological text “The Poetics of Space,” Bachelard enumerated, through literary references, the thick layers of sensation and meaning, which accrue to different kinds of spaces. Looking at Kapoor’s two concave mirrors, discretely situated at right angles in the corner of the gallery, one observes how they pull the entire space of the gallery into the smallness of a corner, evoking Bachelard’s sensation of “intimate immensity,” fusing the “corner in a house, every angle in a room, every inch of secluded space in which we like to hide, or withdraw into ourselves, … a symbol of solitude for the imagination” with the vastness of a forest, a maze, the night or, indeed, a mirror which “accumulates its infinity within its own boundaries.”