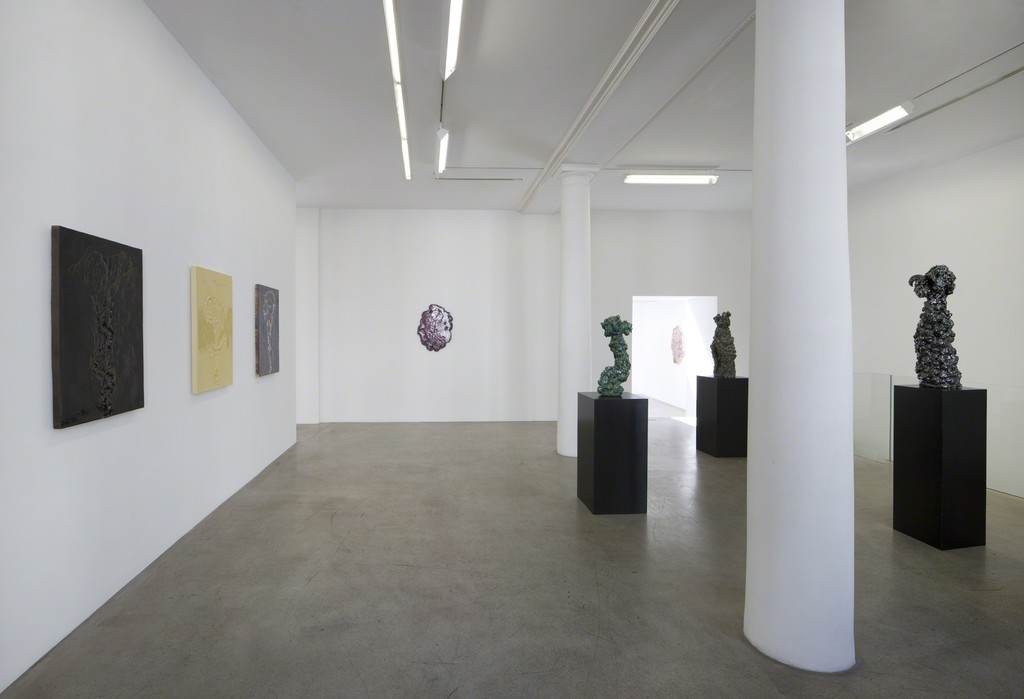 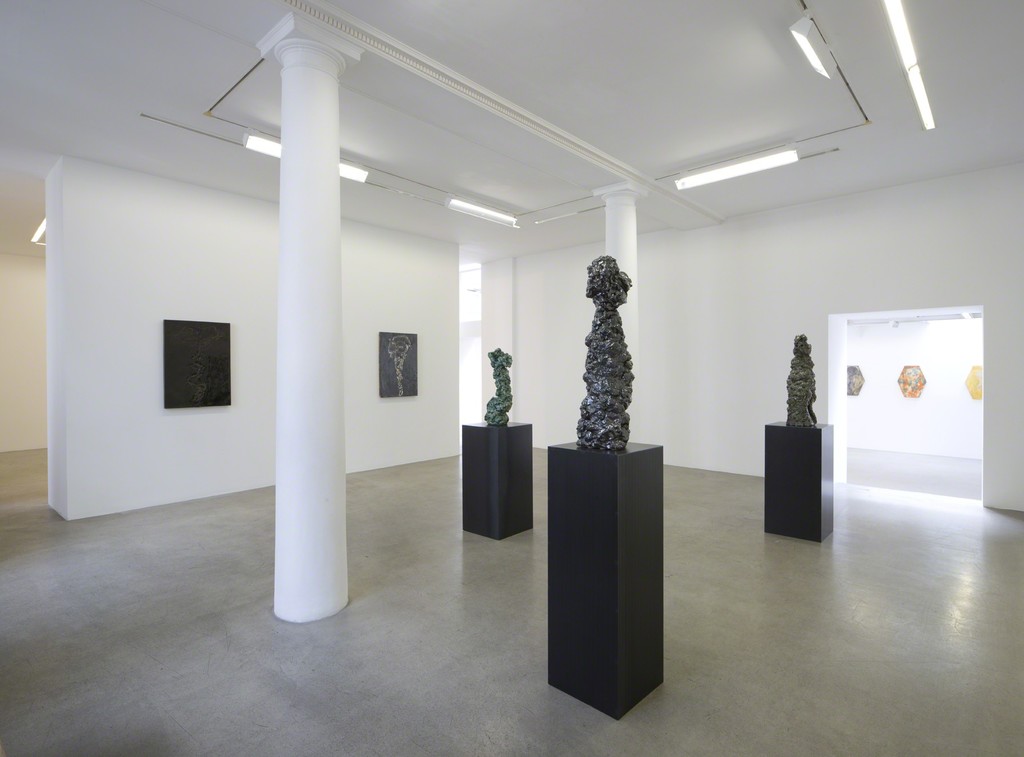 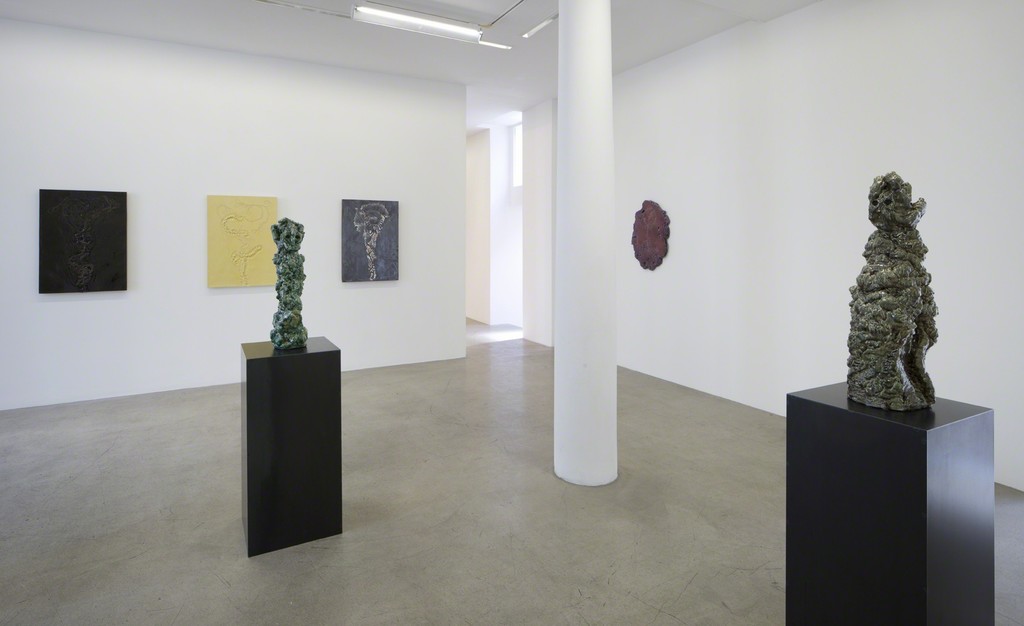 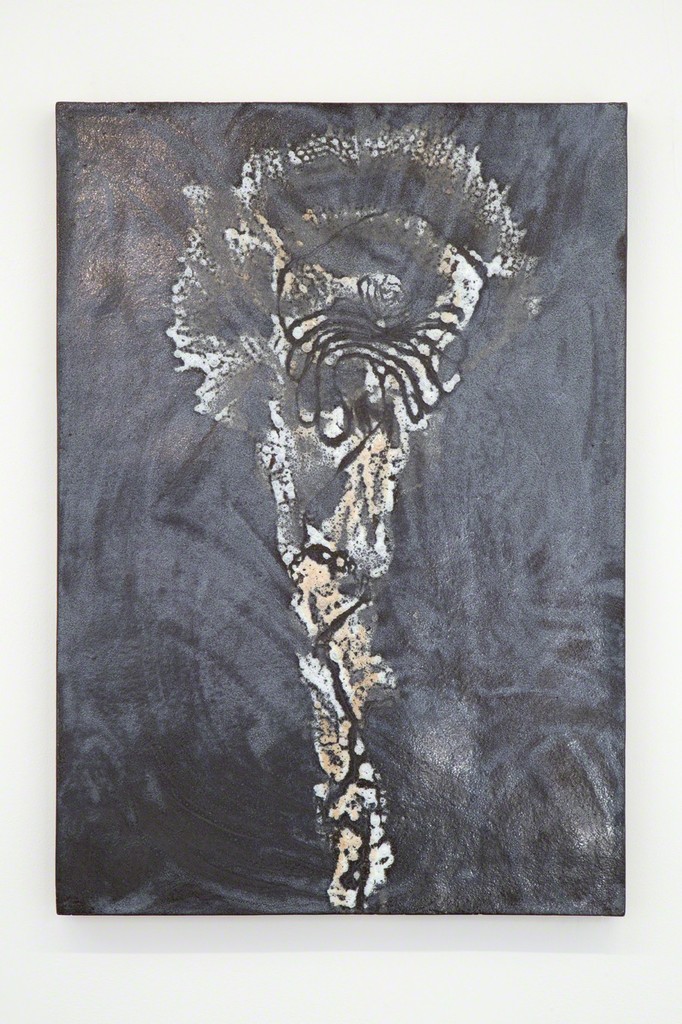 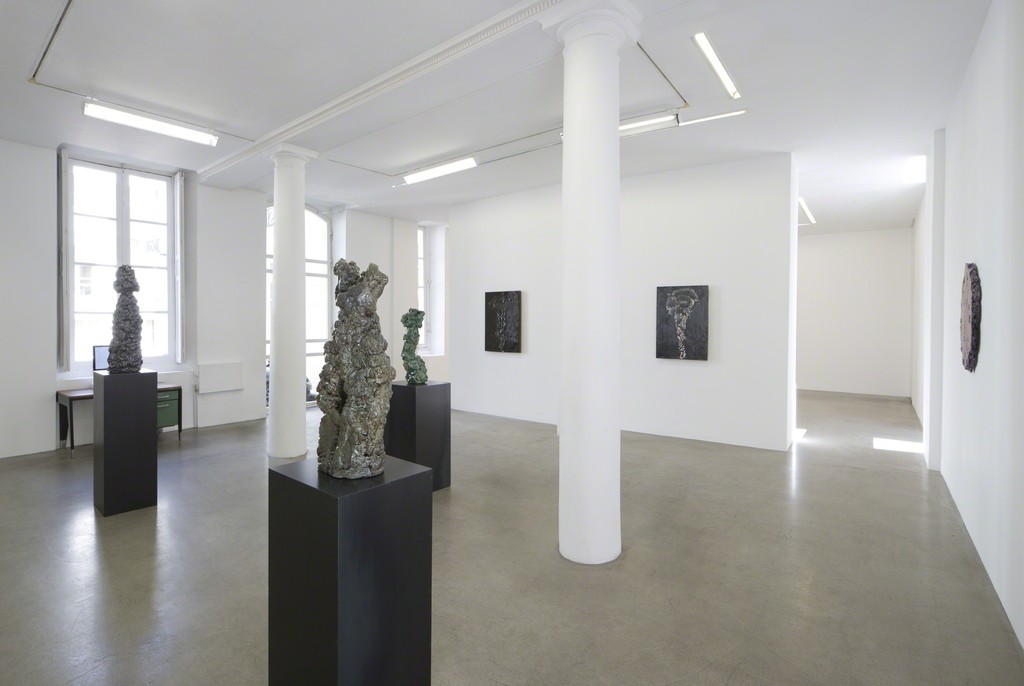 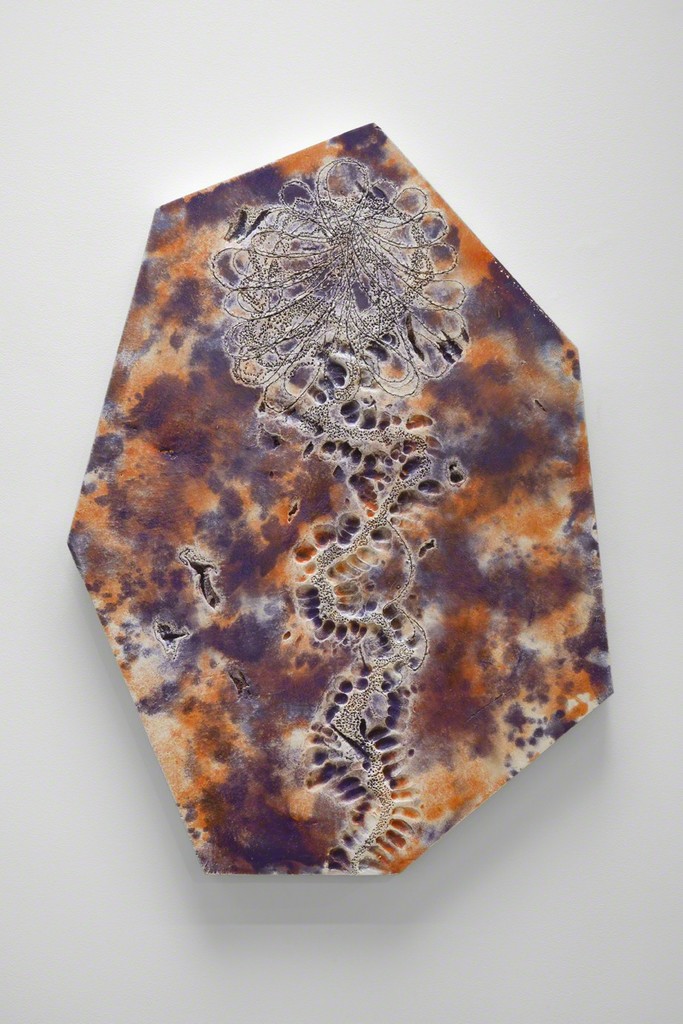 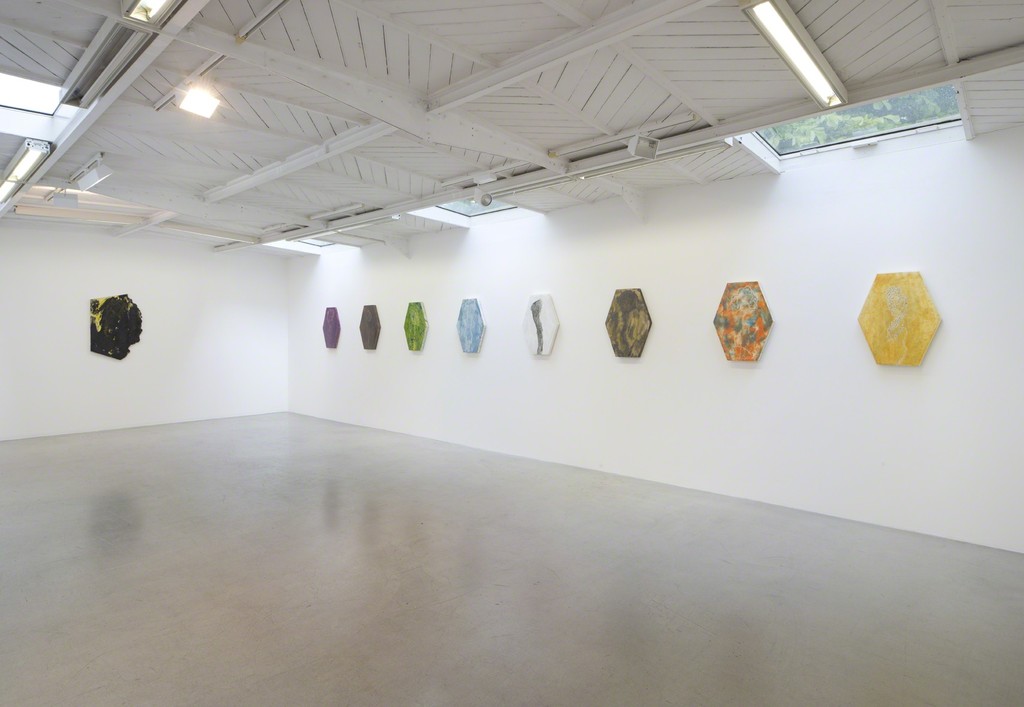 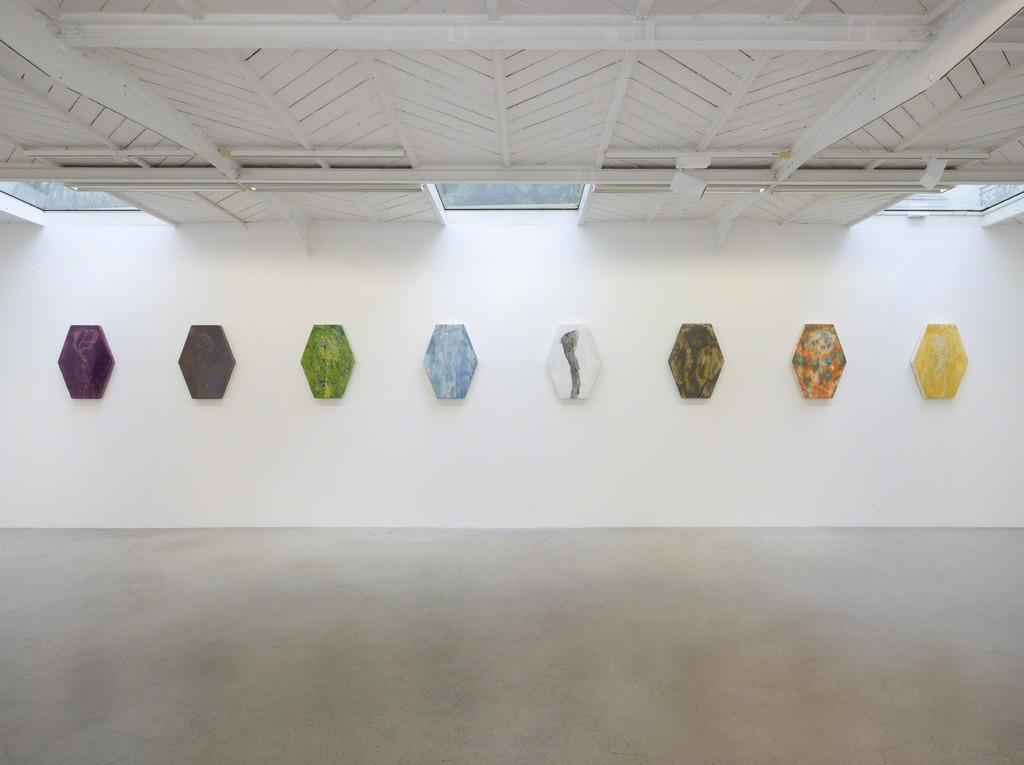 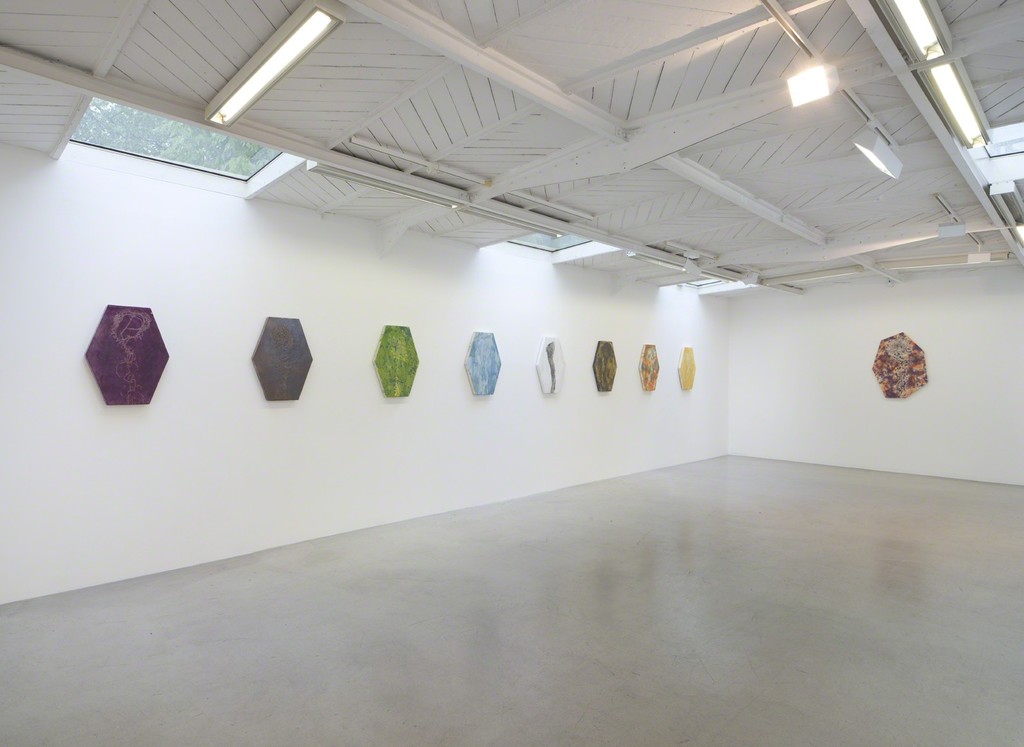 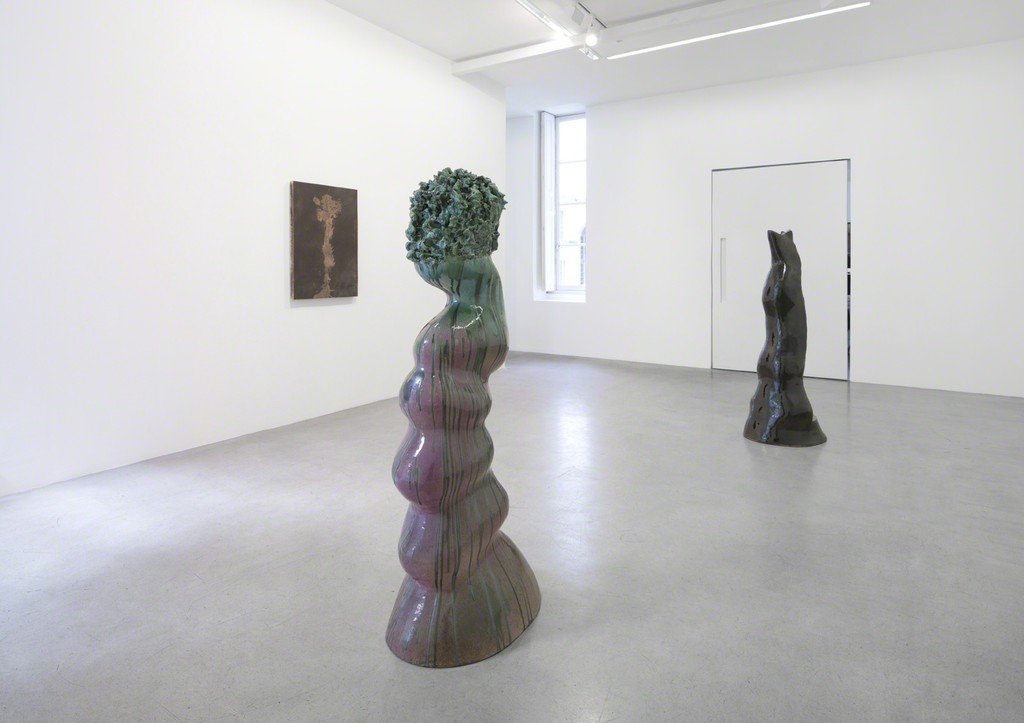 Kamel Mennour is pleased to present American artist Cameron Jamie’s first solo exhibition at the gallery. In his latest exhibition, Jamie is exhibiting his new series of ceramic works which he has expanded and
merged into his own personal language as an extension of his graphic and sculptural disciplines.
With his video works, photographs, performances, sculptures and drawings, Jamie has been a major figure on the international arts scene for the last thirty years. His practice, enriched by appropriations and collaborations, has often been compared to anthropology, and continues to stretch the notion of identity, highlighting the resurgences of myth and fantasy in everyday life and popular culture.

His investigations into ritualistic practice in marginal or underground cultures deconstruct the overarching processes of normalization. His most recent work, however, forces us to rethink his role as the amateur
documenter of backyard and urban culture that he has been assigned. Though his work has often been explained by his own biographical context (the loss of meaning and the desperation that came out of a normative life in the sterile suburbs of Southern California), he freed himself from this through a wider reflection on the conditions of life in a total society of the spectacle. Like an antidote to mass culture, he has been developing an intimate cosmology that transcends the death of the subject, and sublimates expressions that come from so-called
minor forms of expression.

Jamie has been working actively in ceramic again for the past decade, the material he originally trained in during his early school years which allows him to work through successive additions and effacements.
Jamie draws on large smooth plates of wet clay, by reacting to draw lines and create forms using both his hands, fingers, and a large needle to mark shapes as he etches incisions, scratches, or stipples, which he then quickly scrapes or smooths out, in order to start again. He uses and mixes a vast range of bright, often acidic and highly contrasting glaze colours which are layered upon one another through successive firings, each firing putting them at risk and finally saturating them in vibrant colours.
On these ceramic plates, the imagery of Jamie’s automatic drawings of the interior and exterior of his figurative art (heads, guts, organs), real matrices of his whole body of work, have been replaced by more slender, ethereal signs. From these mind maps, it is often the image of a flower that emerges, the scrollwork, fluid lines suggesting a head mounted on a graceful body. For Jamie, this is Georges Bataille’s flower, an idealised and therefore misleading form, the medium for a symbolic projection of the idea of beauty, born, however, of compost. An image of impermanence and fragility, it can also be seen as a vacillating body. Like his earlier imagery, from the wrestler’s mask to the deconstructed interior and exterior of the face, his figurative alter egos are always figures in suspense, mediums for generic representations that make it possible to fix a temporary, uninhibited state.

The skillfully choreographed exhibition space is filled in the centre with large ceramic sculptures. Somewhere
between totemic forms and mounds, these organic forms materialise in their own way an idea of the shapeless.
At times their surfaces are smooth, or carry the imprint of the full-body grip of the artist in the throes of this
vaguely anthropomorphic presence, topped with profiles in the shape of a bird’s beak. A projection of an interior
self, the animal is here another variation in his effort at disfigurement.
One of the new large sculptural pieces has been vertically sliced in two in order to reveal their insides, like one
splits a gemstone rock in two. With a surgical gesture, the artist reveals a second anthropomorphic form and
figure inside the architectural interior cavern. Reminiscent of the concretion of material in the ritual ablutions
of African bolis, the overabundance of glazed material layered through successive firings, creates a feeling of
mysterious emotion and beautiful intensity as one examines and explores the frozen form of the cavernous
figure.

A true sculptor, Cameron Jamie massages earth like he kneads history in a continuous cycle of construction and
deconstruction. Creation in the widest sense of the term is an exact product of these contradictory psychic
forces.
Constantly somewhere between letting go and control, figuration and abstraction, Jamie formulates a precarious
balance between the sublimation of an interiority and the serial processes of conceptual art. By inscribing his
works in a temporality made up of successive instants that also signal his ties to cinema, and in the malleability
of Earth, he opens the way for a wider conception of drawing as a medium rooted in time and space.