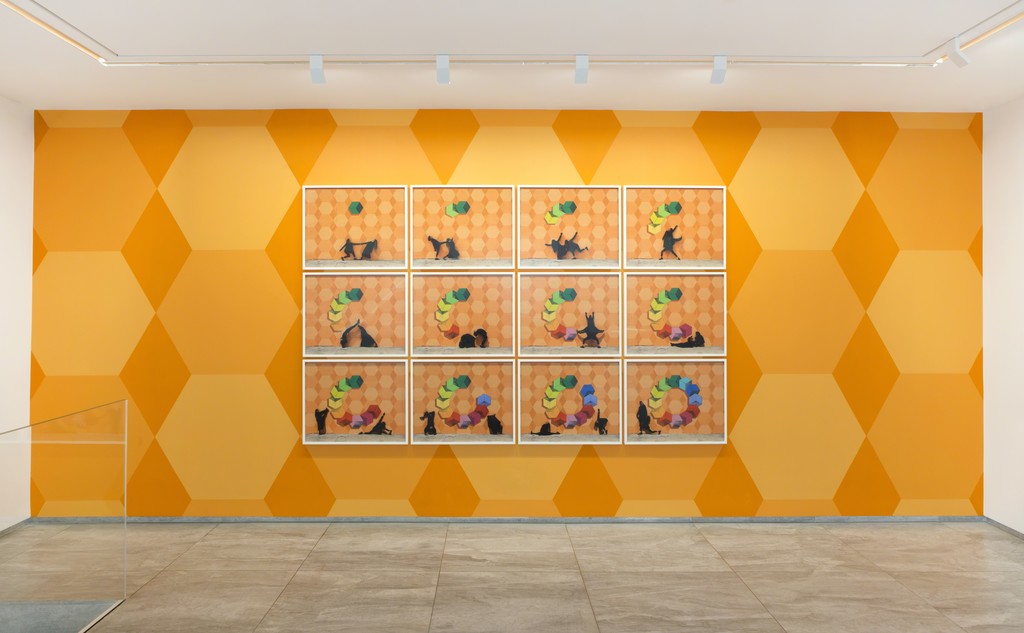 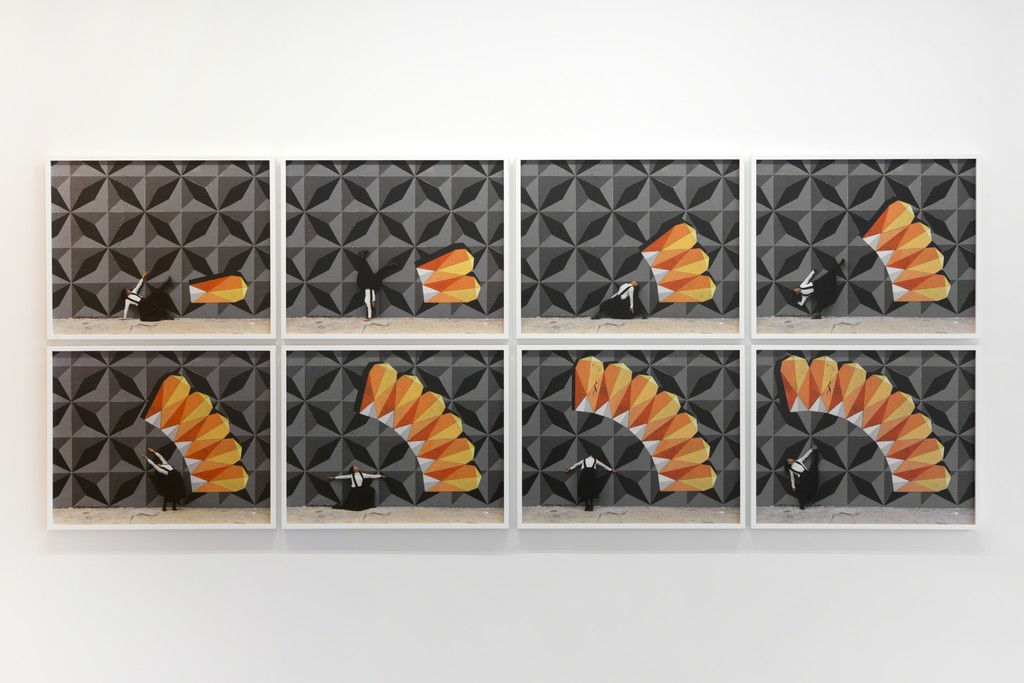 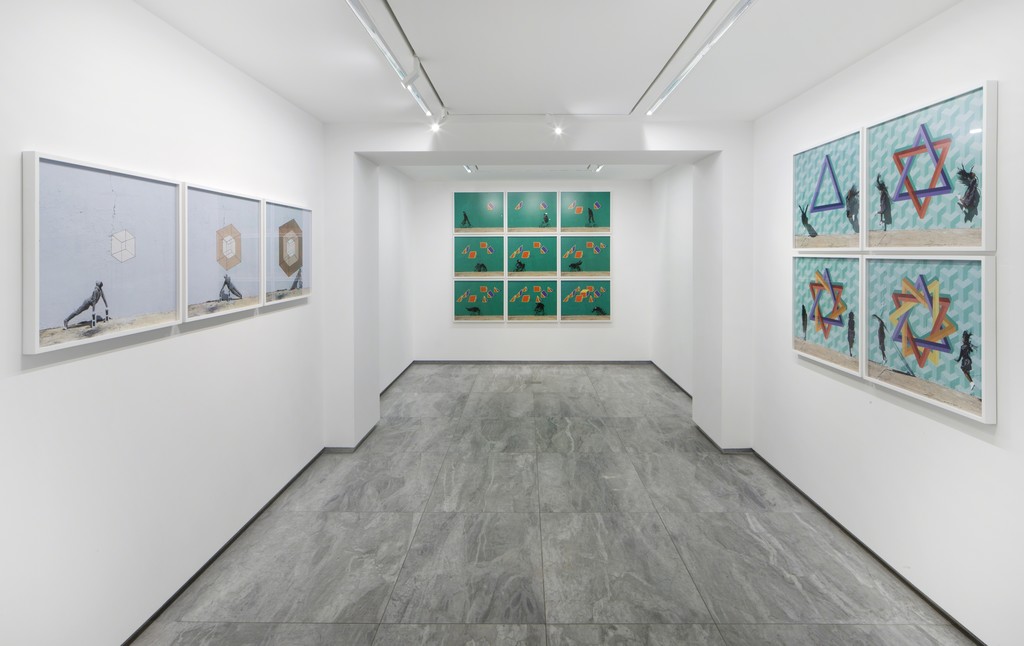 Violaine Boutet de Monvel: The Broken Wall, your second solo show at Kamel Mennour, follows up on your exhibition a plan of the soul, for which you were awarded the 2018 Zurich Art Prize at the Museum Haus Konstruktiv. What are you presenting at the gallery?
Robin Rhode: I present three recent photographic ensembles from Haus Konstruktiv, along with older ones. They were all produced outside, against the same broken wall in the Johannesburg suburb of Westbury, in South Africa, where I grew up. I’ve also included a wall painting to echo the geometric tiling that appears in Nigerian Sands (2018). Manifesting this motif into the exhibition space allows the audience to have a stronger physical relationship to my work. It activates the surface of the gallery’s walls in a very subtle way, like a soft whisper blurring the notion of fictional space.
What is the process behind these photographic ensembles, in which performers playfully interact with figurative or abstract wall drawings in the making?
I’ve been working on this particular wall in Johannesburg for seven years. My team includes about fifteen persons now, mostly young people from the community. I always sketch and develop the concept behind each work beforehand. The notion of physical interaction between the performers and the wall drawings is crucial. From one photograph to the next, there is a transient, almost spiritual shift, when the drawing becomes alive, breaths, gets a heartbeat and develops a soul through the performers’ engagement with it.
The sequences of interactions that these works unfold, respectively, often read as if you were catapulting dancing bodies into drawing fields. What is your relationship to choreography and narration?
I’ve never formally studied choreography, but I have an immense appreciation for dance and performing arts. I come from a very gestural society, where the movement of the body speaks louder than words and conveys more than language. It breaks down communication barriers between cultures, especially those as complex as South Africa’s. Narration comes organically through drawing. Each mark carries a storyline, and each photograph is a steppingstone towards a broader narrative that extends beyond the picture frames.
Drawing and photography poetically encompass your performances here, which are both staged and documented. What importance do these two mediums have in your overall practice?
I consider here photography only in terms of capturing a wall drawing and the performance that animates it. Drawing is really at the core of my aesthetics. It is the central narrative towards which everything else gravitates. I currently feel the urge to make art with all the visual lexicons at my disposal and I flirt with many mediums to do so, but my ultimate wish is to draw, become an abstract painter and find inner peace in the process.
This show was titled after an essay by Sean O’Toole, in which he draws parallels between your work and Johannesburg. The city was shaped throughout the Apartheid era. Having relocated to Berlin, do you believe your practice still relates to the wall as a possible symbol of ethnic or political segregation?
My work has considerably evolved since I moved to Berlin, seventeen years ago. As a South African artist, I feel almost compelled to produce works that engage with identity politics or the issue of decolonization, which dominate the art scene in my home country. However, due to my geographical distance, I was led to embrace new forms of inspiration. Among them, colour theory, architecture and mathematics have been a breath of fresh air to me, away from the overly political, but I still use humour to poke fun at aspects of power.
Born in 1976 in Cape Town (South Africa), ROBIN RHODE lives and works in Berlin (Germany). His work was part of major solo and group exhibitions at a number of important museums around the world such as the Museum Haus Konstruktiv, Zurich; the Haus der Kunst, Munich; the Los Angeles County Museum of Art (LACMA); the Museum of Modern Art (MoMA), New York; the National Gallery of Victoria, Melbourne; the Hamburger Bahnhof - Museum für Gegenwart, Berlin; the Centre Pompidou, Paris; the Wexner Center for the Arts, Columbus; the Hayward Gallery, London. Furthermore he has participated at the 51st Venice Biennale, the Biennale of Sydney and the New Orleans Biennial. His work is part of various public collections: the Centre Pompidou, Paris; the Julia Stoschek Collection, Düsseldorf; LVMH Moët Hennessy – Louis Vuitton, Paris; the National Gallery of Victoria, Melbourne; the Solomon R. Guggenheim Museum, New York; the Museum of Modern Art (MoMA), New York; the Walker Art Center, Minneapolis.
Robin Rhode was the eleventh winner of the internationally renowned Zurich Art Prize in 2018.