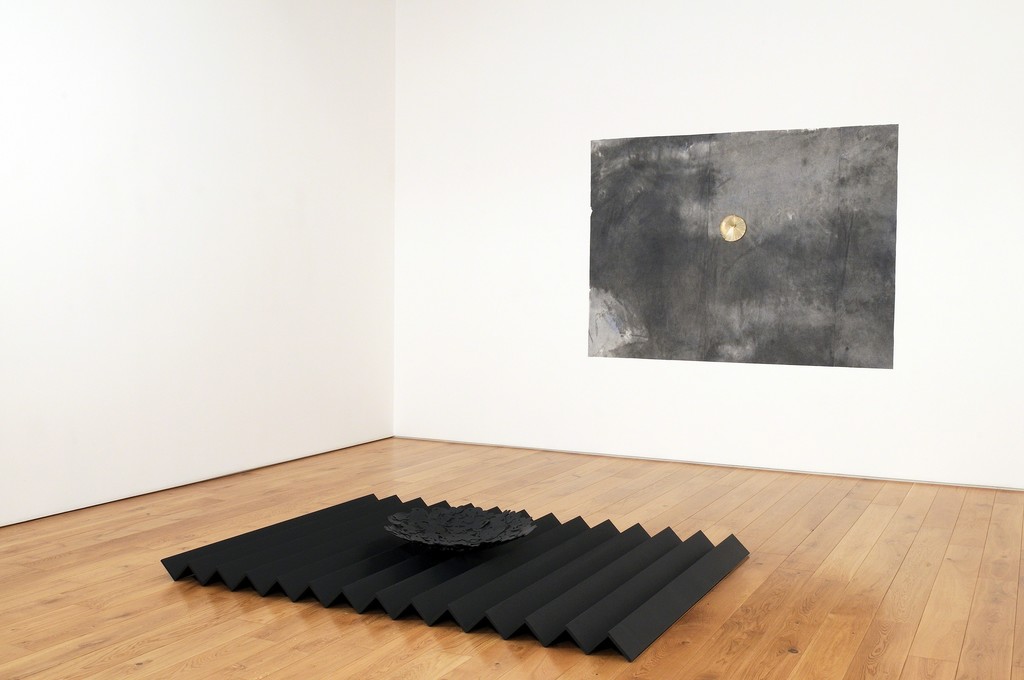 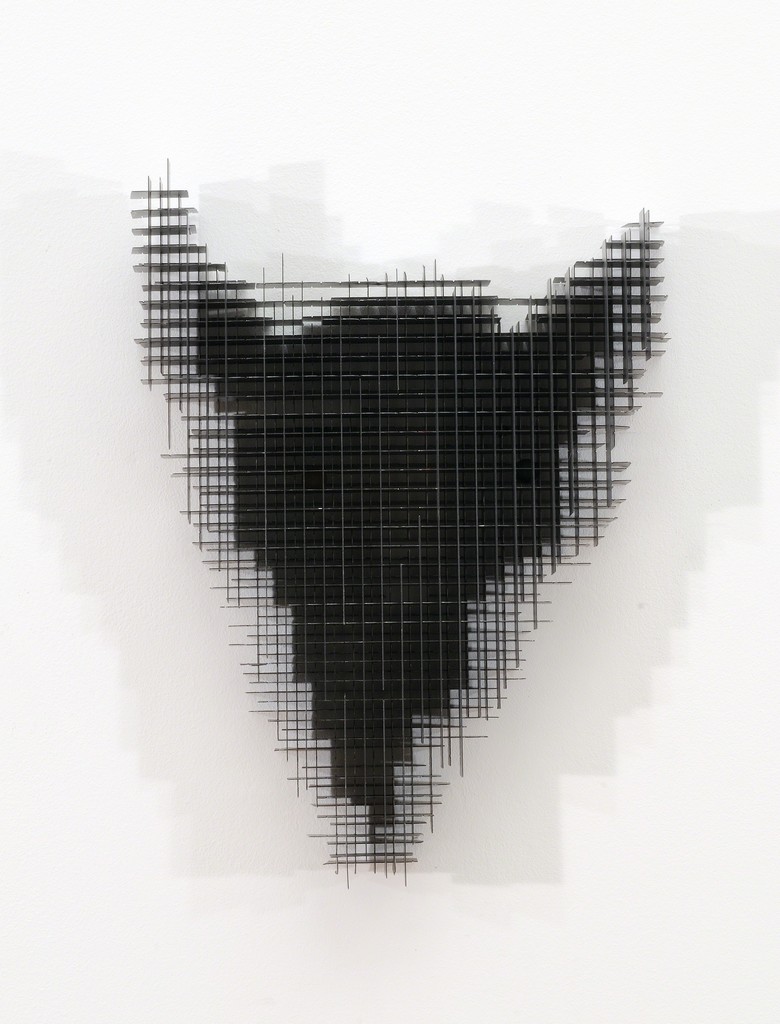 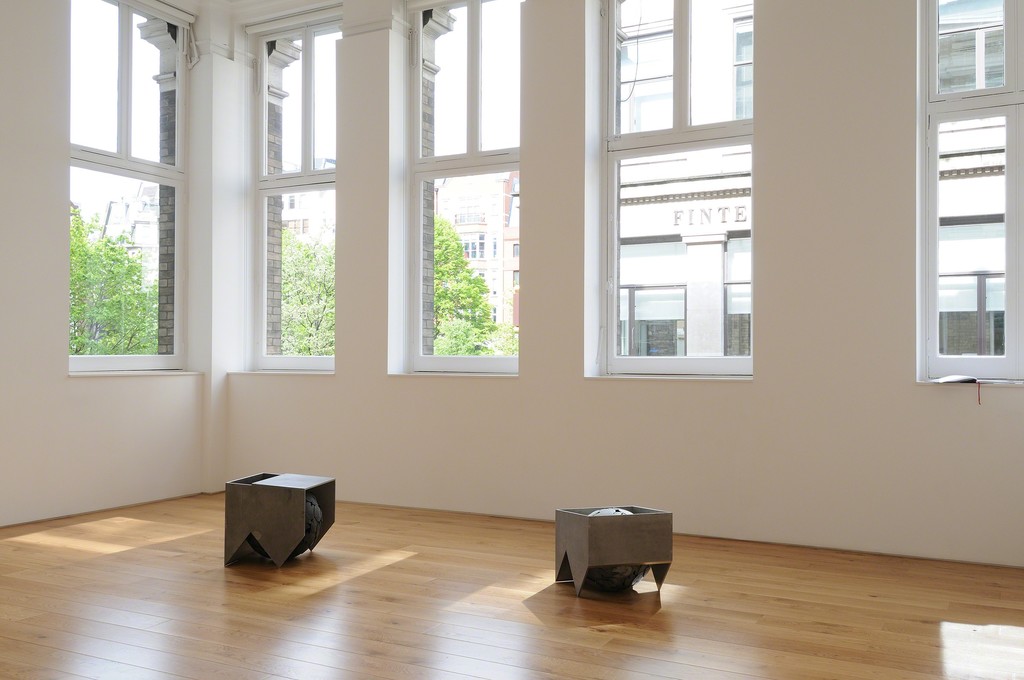 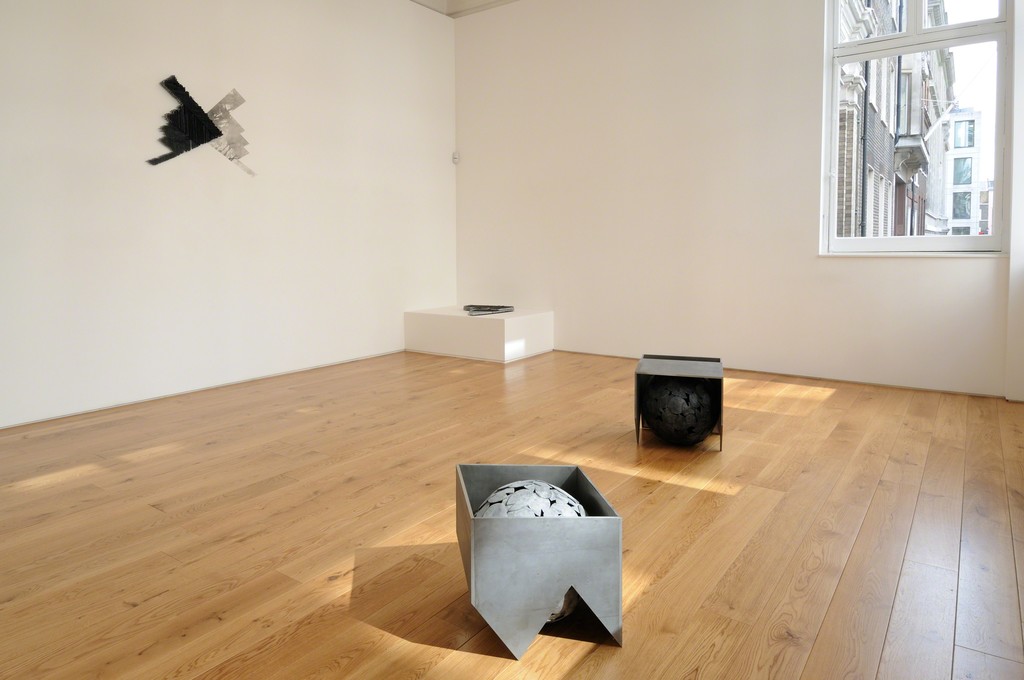 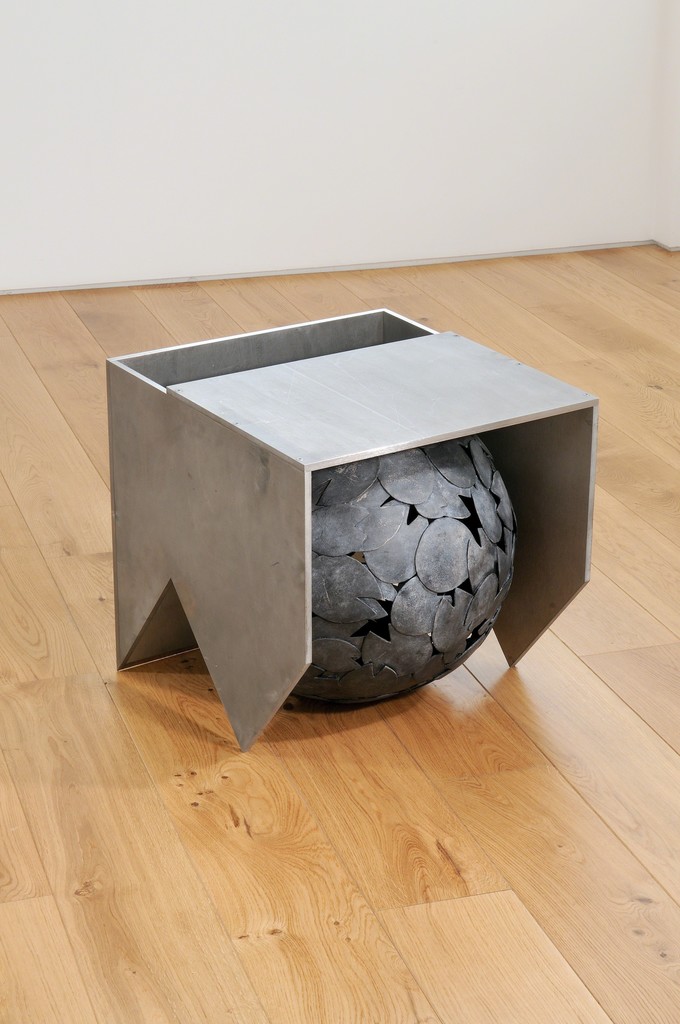 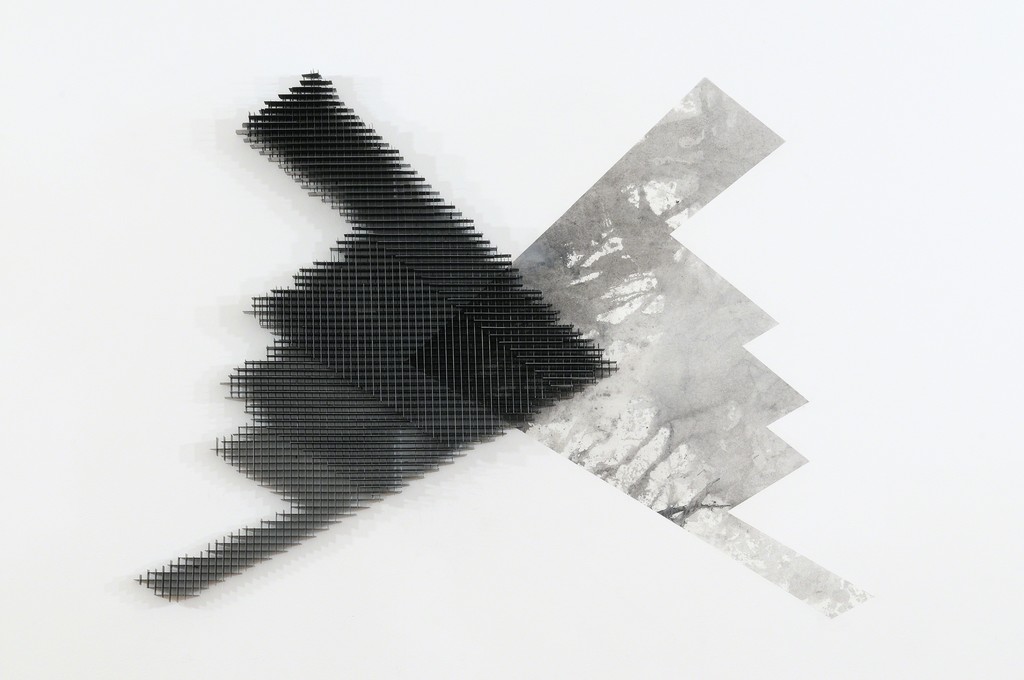 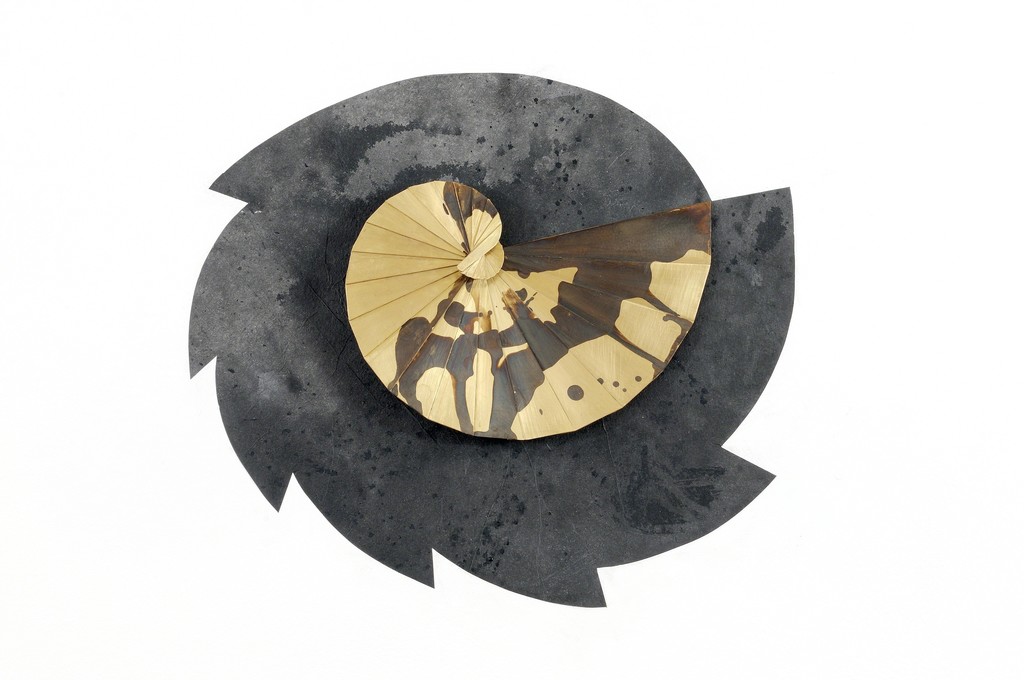 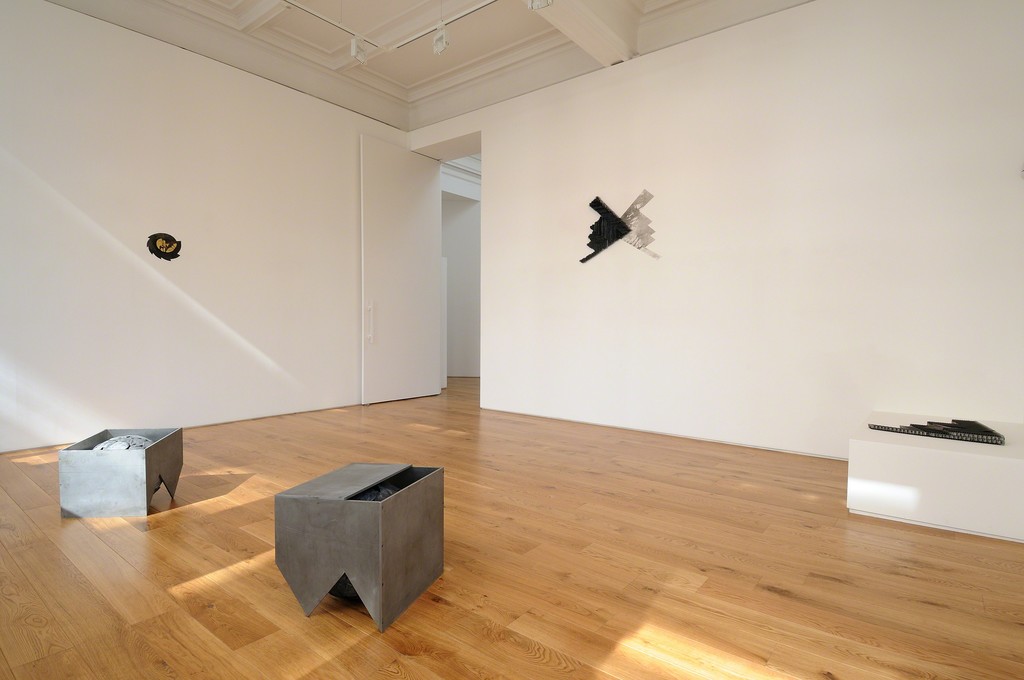 Karsten Schubert is pleased to announce an exhibition of new sculpture by Alison Wilding to open at the gallery on March 31 2008 and continuing until May 23 2008.

Eloise Hawser writes:
Planes orbiting a core, and binary juxtapositions (ceramic and stainless steel, Japanese paper and brass) are pairings that characterise the force of Alison Wilding’s new sculpture. Yet this body of work also problematizes these binaries into a total product that is more obdurate and complex: In 'Waterbox 1', for example, a sphere is trapped by an angular oddity - between a box and something more ornate - that grounds it, oddly immobile. The metal slats of 'Aerial' are densely interlocked and seem to emanate out from a central depth, but surprisingly they effect something as transient as a shadow, or a vibration. The artist is interested in the quixotic effects of nature; the appearance or disappearance of the sun can scramble relationships that had appeared stable. It is her peculiar talent that she is able to spread this sense of dissolution through her work so that our perception of surfaces and structures dissipate as soon as you get wind of them.

The piece 'Rust', which shares the basic unit of an abstracted stealth bomber plane with its sister piece 'Aerial', embodies an ambiguity between cohesiveness and volatility. Whereas 'Aerial', a wall work, suggests a state of synthesis, within the grid -field of 'Rust' Wilding has embedded an actual model of a nighthawk bomber, although its particular shape seems to being turning into a recurrent avian type. Half secluded in a moment of amniotic stillness, it reveals itself just as an object emerges from examined space in an archaeological site. The model is not entirely submersed, and there seems to be some resistance to such an absorption; the tip of the plane and the point of the field face in the opposite direction, as if striving to separate themselves. This operation is central to a strand of Wilding’s work: a paradoxical moment where elements simultaneously begin to cohere into a continuous, discrete thing yet slip into dissociation.

'Tracking' consists of three sections of Japanese paper glued across the wall to form a dark skin, in whose centre a brass disc is uneasily pinned. This foreign body calls to mind the motions of a spool, a disjunctive event unfurling or winding up in the midst of a blue/grey expanse. However, our understanding of these components’ apparently troublesome relationship is enhanced if we consider another piece 'Zoom'. There is a feeling of temporal sequence, that the dark field has been drastically reconfigured by some latent power in the disc, and has lost is status as an independent, regular field. Its reduced shape now suggests saw teeth, turning inwards, a disappearing bird. This is indicative of the recurring internal logic where one piece generates the possibility of another permutation, a cousin with a different mood. A spiral that stands for infinity but is composed of blades enacts an important contradiction where any relationship that approaches closure must meet with scission.