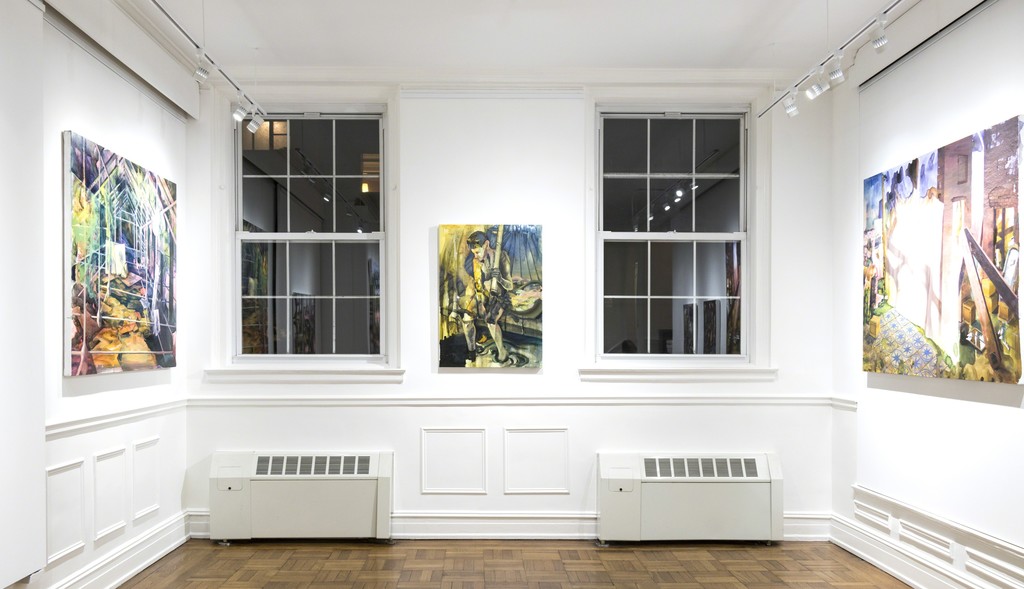 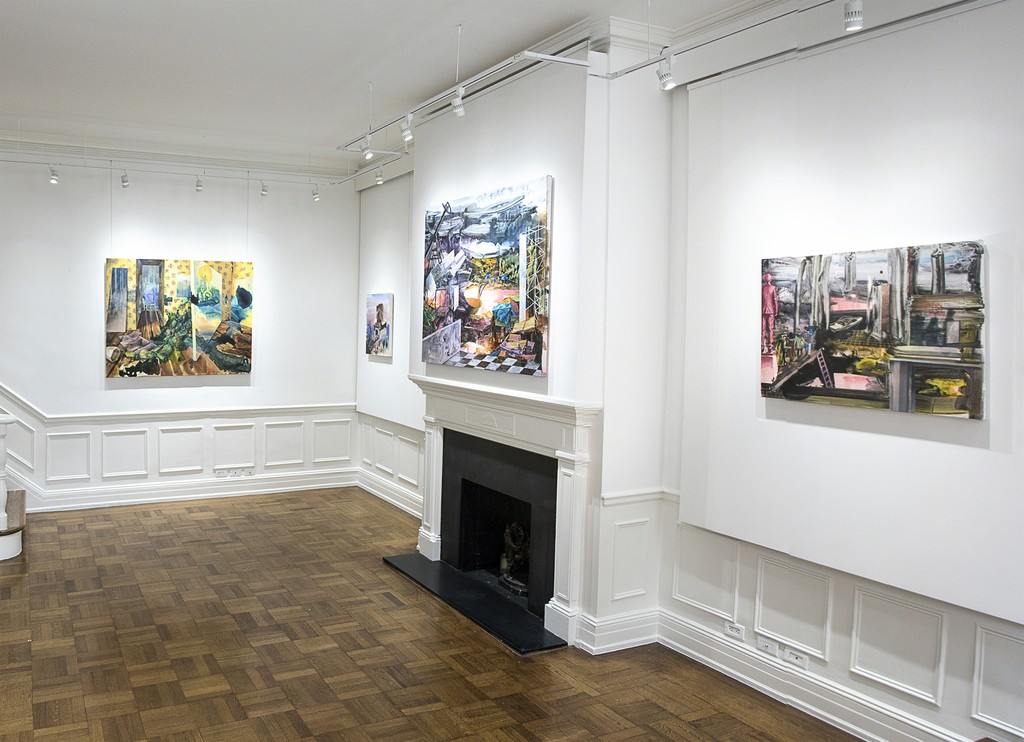 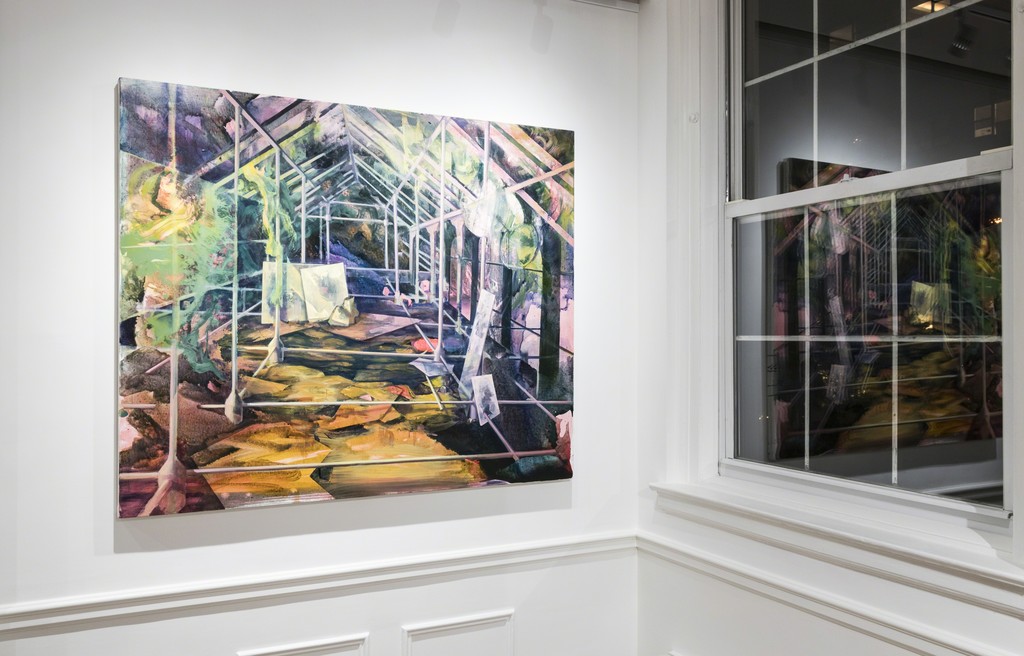 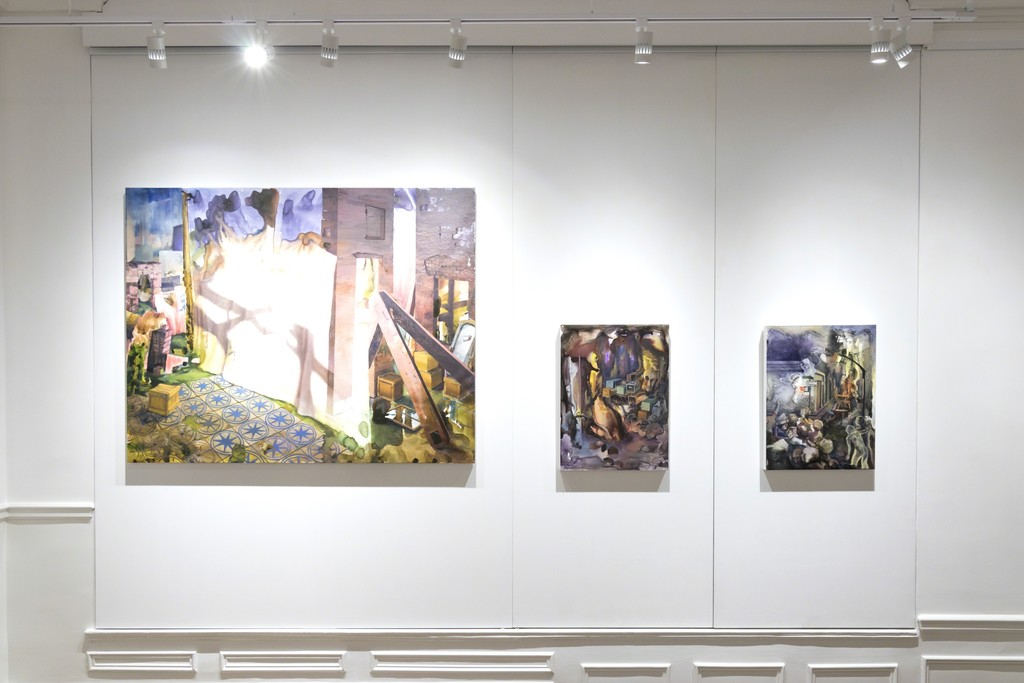 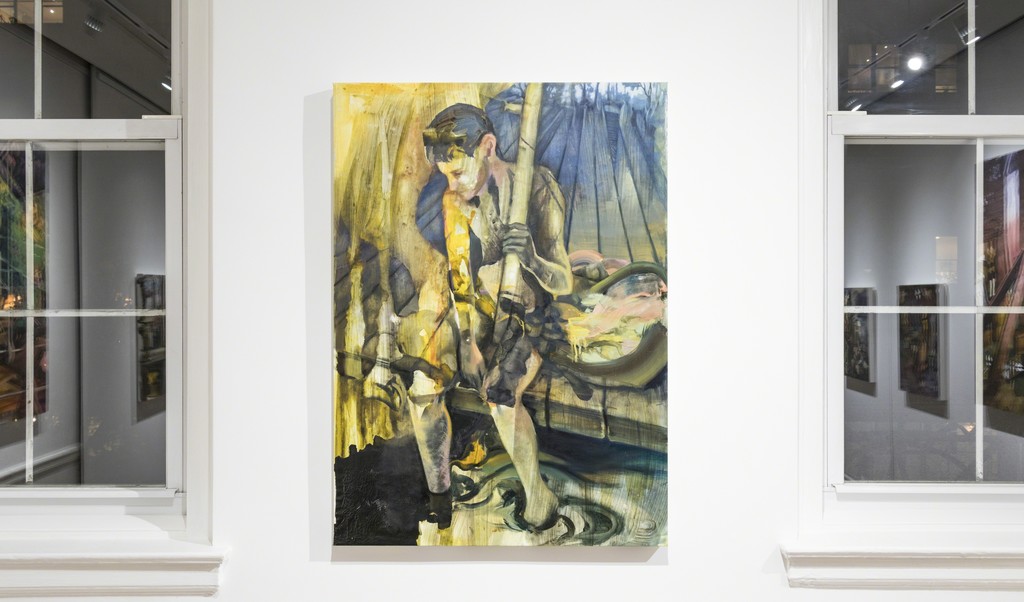 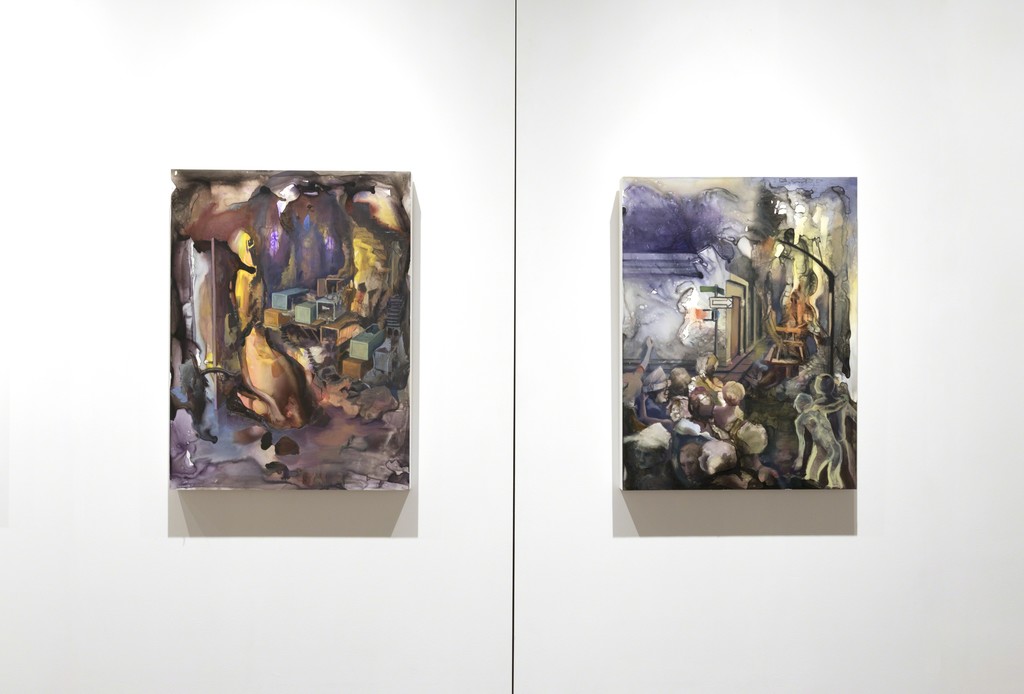 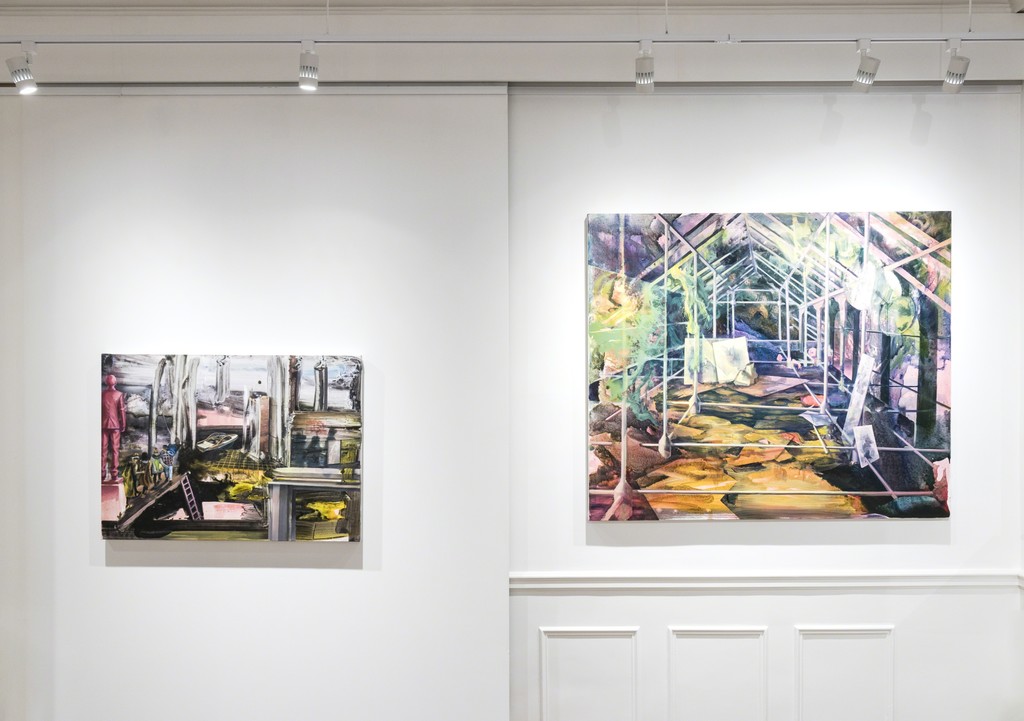 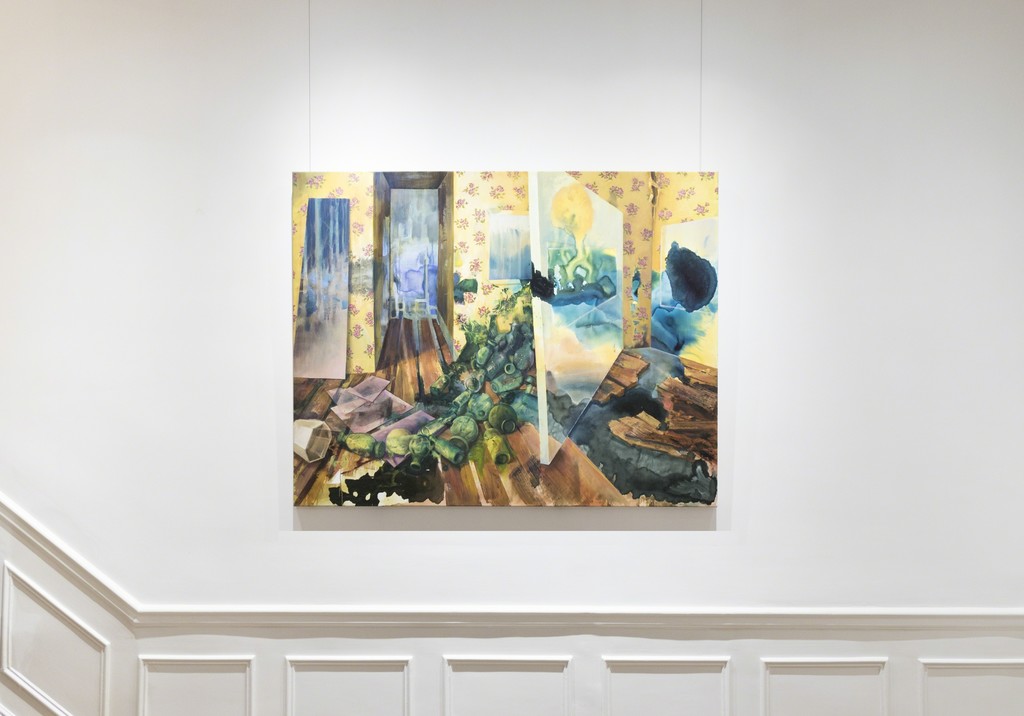 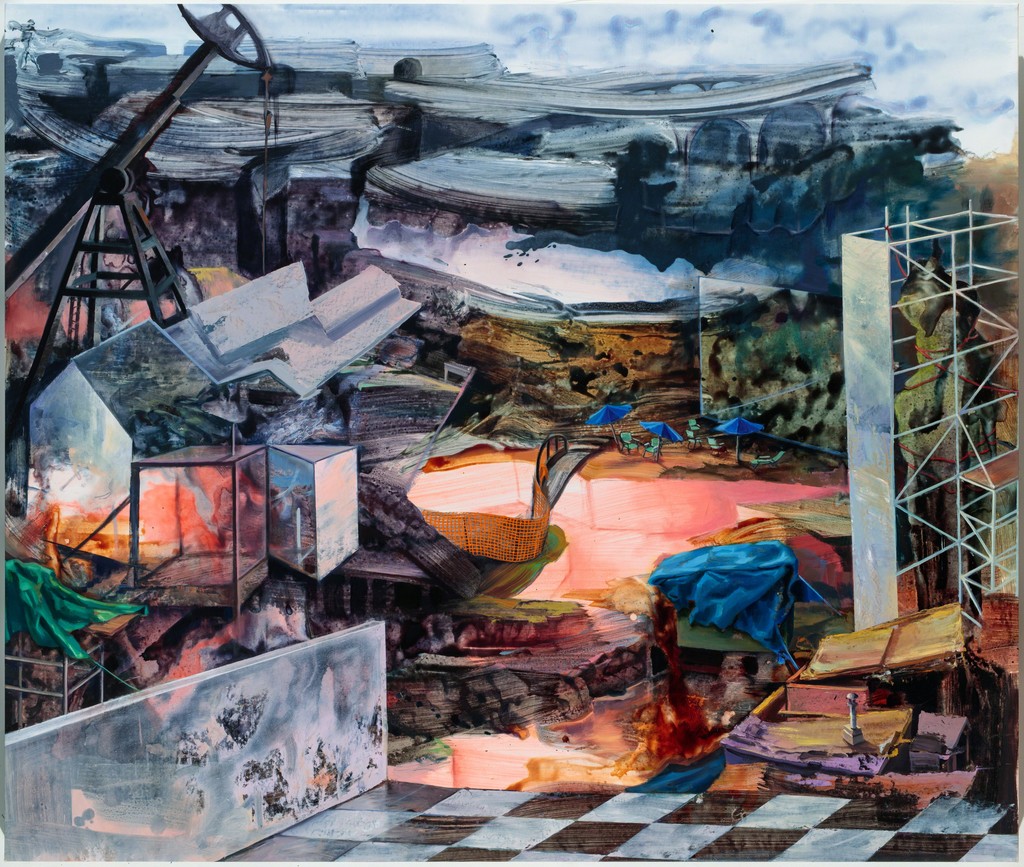 The Kate Oh Gallery is pleased to announce its inaugural solo exhibition, Metropolis, featuring new paintings by Virginia Wagner. The exhibition takes its name from the 1920’s German film that presents a dystopic world of inequality between the glass and garden city of the wealthy and the underground, flooded city of the workers. Wagner turns this lens onto our own cities.

The paintings pit glass structures and scaffolding against stripped, volatile environments. Wagner is interested in cycles of human production and environmental devastation. The work looks at what is left over, after the storm or the natural erosion of time, and what might built from it.

In these paintings, the collaboration between chaos and form takes center stage. Wagner begins each piece on the ground by pouring ink and acrylic house paint. This process allows her to give nature a voice and capture the intricate randomness in organic forms. She then uses oil paint to develop the spatial and architectural structures, the human intrusions that reign in the disorder, creating recognizable forms and rational compositions. The resulting paintings are rich with surprises and the energy that comes from improvising with randomness.

There are many scale shifts in the figural and architectural elements in Metropolis. Wagner sees this as a reflection of how technology is changing the way we think about our relative size as well as the distances between us. The grids, screens, and frames in the work speak to our human methods of mapping and making connections. Her schematics are often imperfect, cracked, as if not everything she invites into the work fits neatly into a mathematical system.

Wagner began these paintings working in an art collective in an industrial area of Berlin. The work is informed by German painting, from Romanticism to Neo-Expressionism and the Leipzig School. Wagner was also influenced by the raw, creative spaces of Berlin, a city that is redefining and rebuilding itself as a place of inclusion after many dark chapters in its history.

Metropolis looks to an unstable future but is grounded in the now. As Margaret Atwood said about The Handmaid’s Tale, “I made nothing up.” In such a time as now, Wagner doesn’t have to either. Her images help us understand what it feels like to live in a time of both unprecedented loss and extraordinary innovation.

Virginia Wagner is a painter and writer living in Brooklyn, New York. She received the 2016 Lotos Prize in Painting and has been granted residencies at the Edward Albee Foundation, Jentel Foundation, Ucross, Vermont Studio Center, and Yale Norfolk. Her portrait series, Outlaws, was made into a short documentary by Joe Rubenstein and was featured on BBC Radio’s Cultural Frontline. Wagner currently teaches fine art at Pratt Institute and Montclair State University.