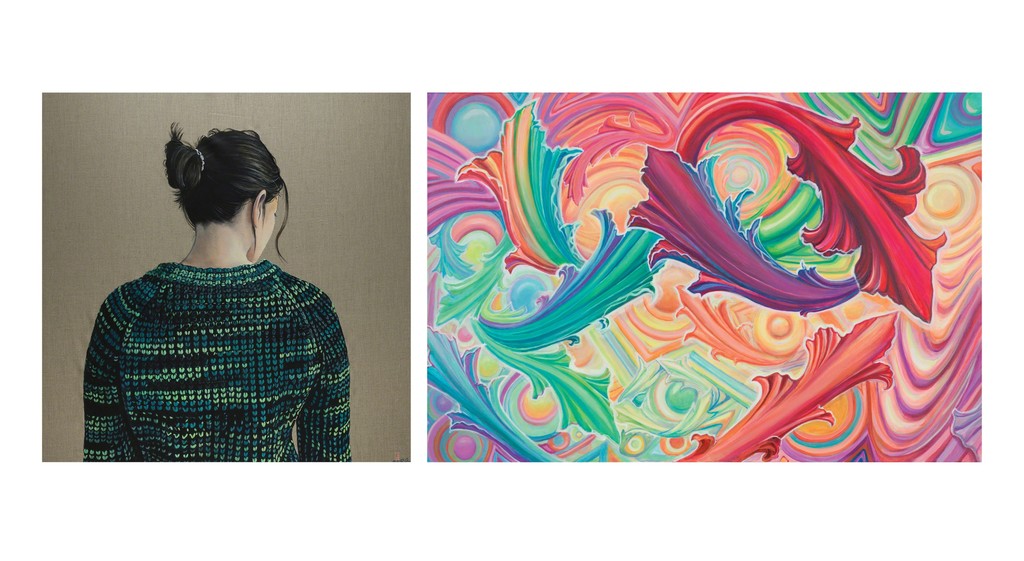 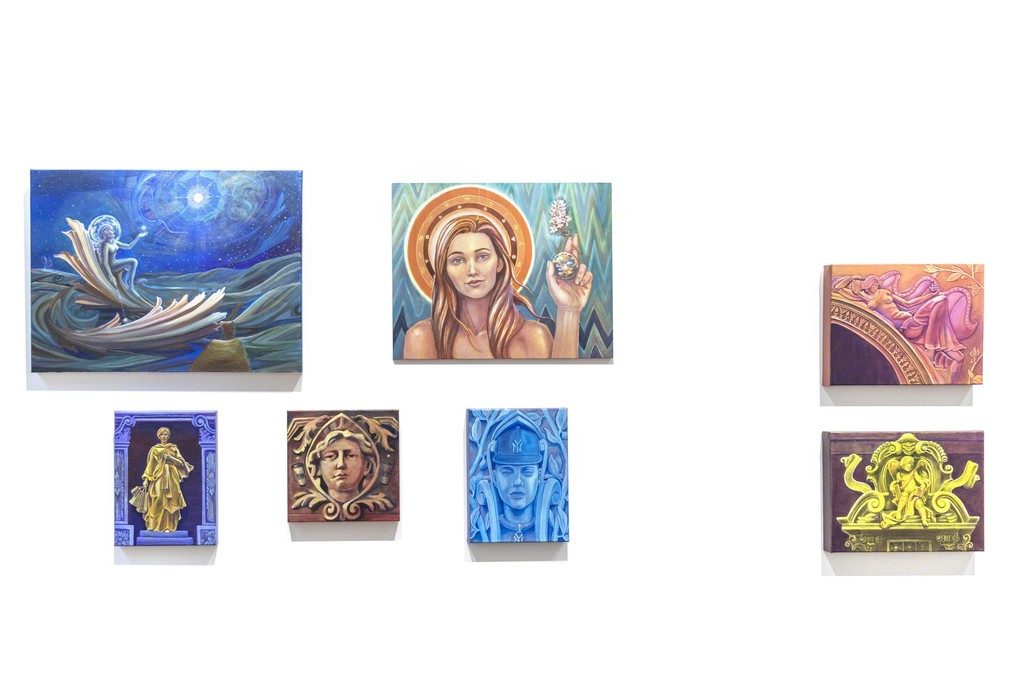 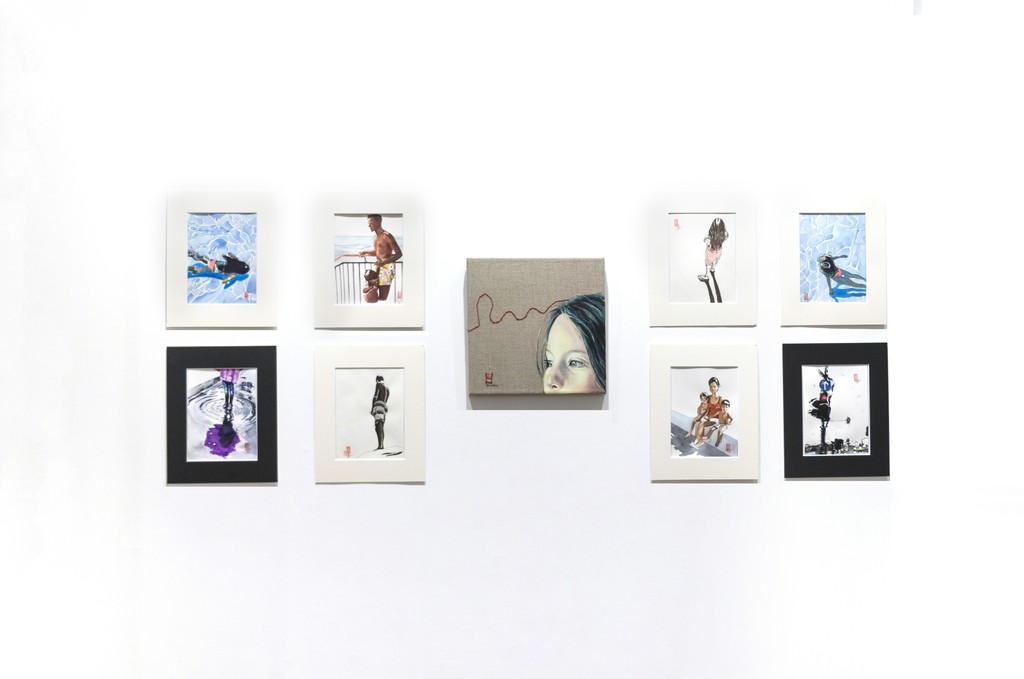 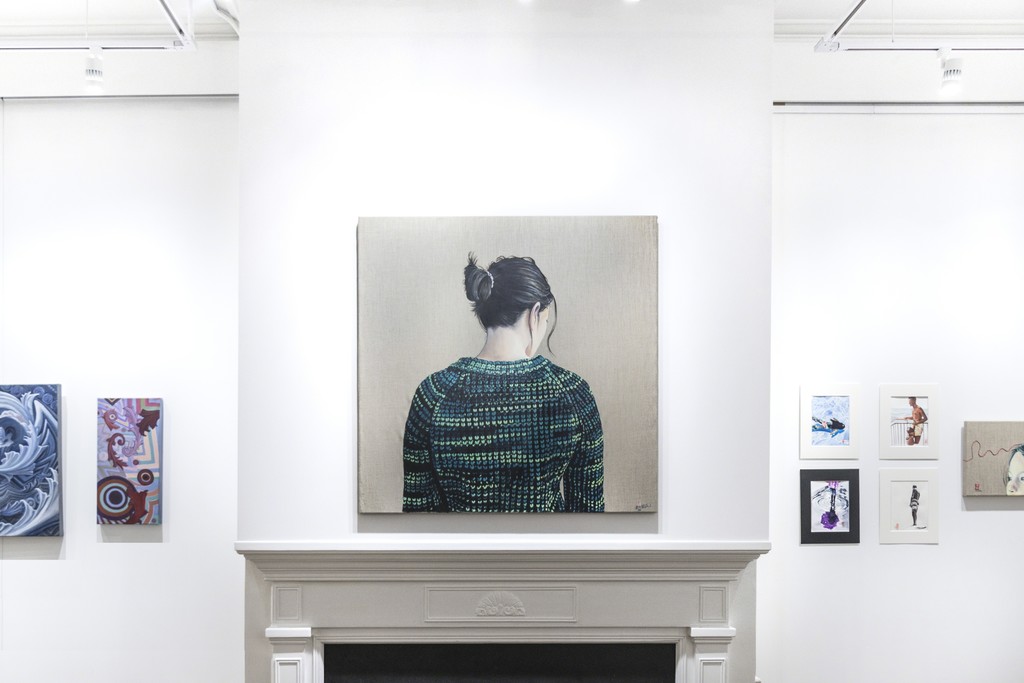 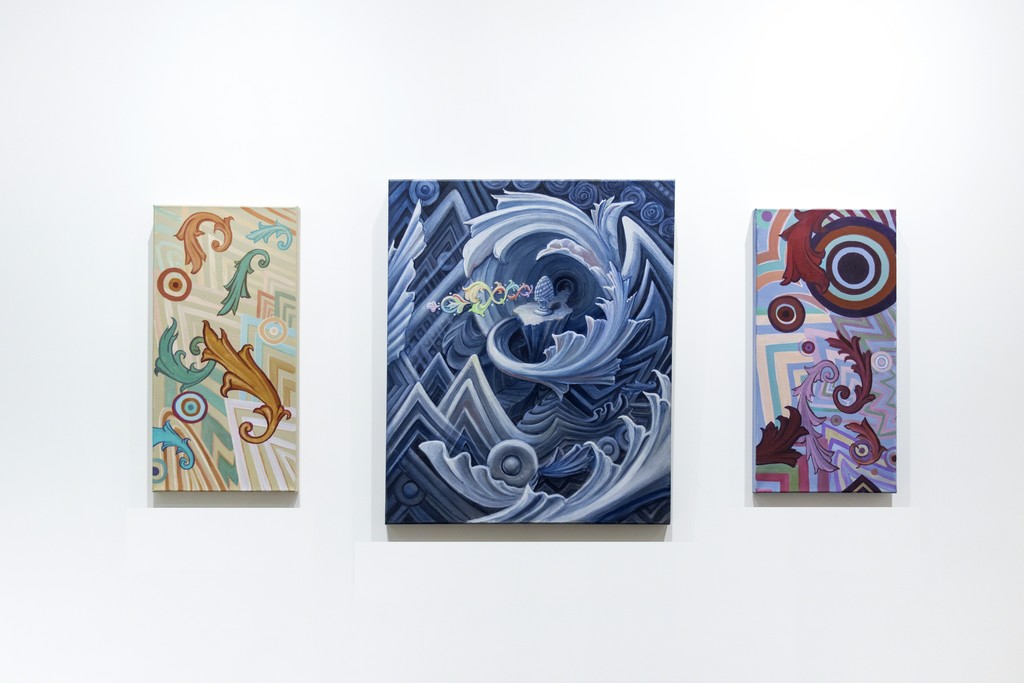 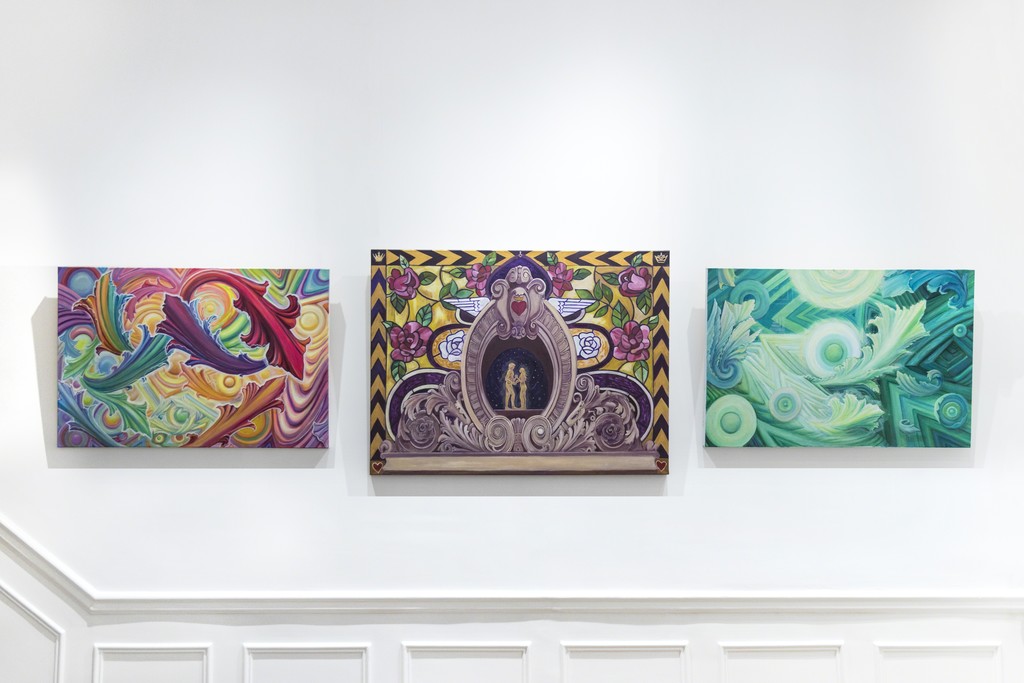 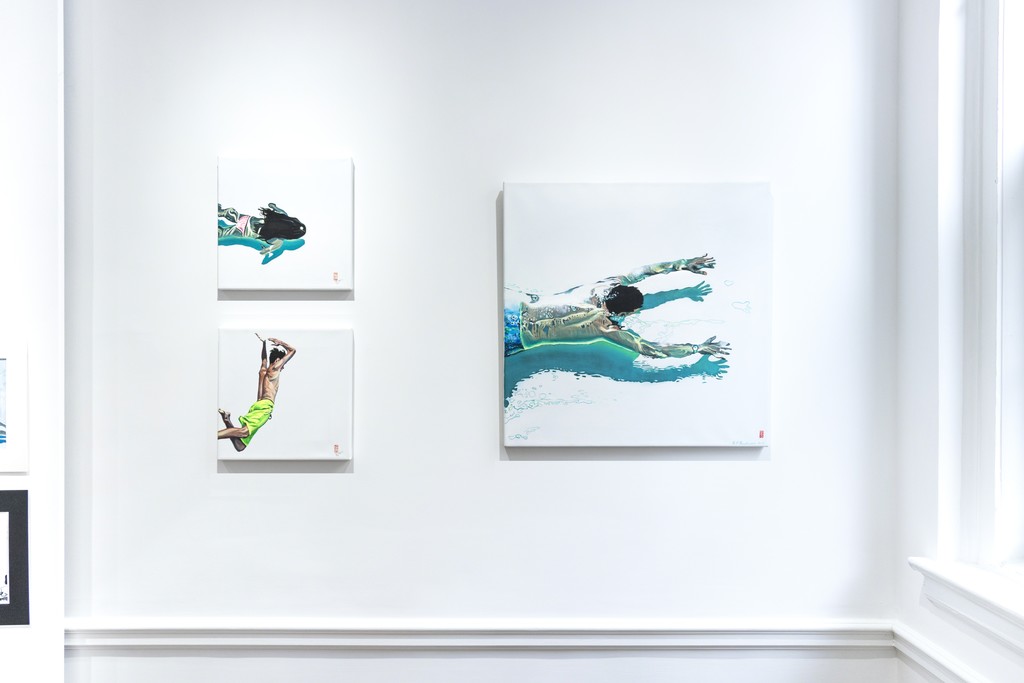 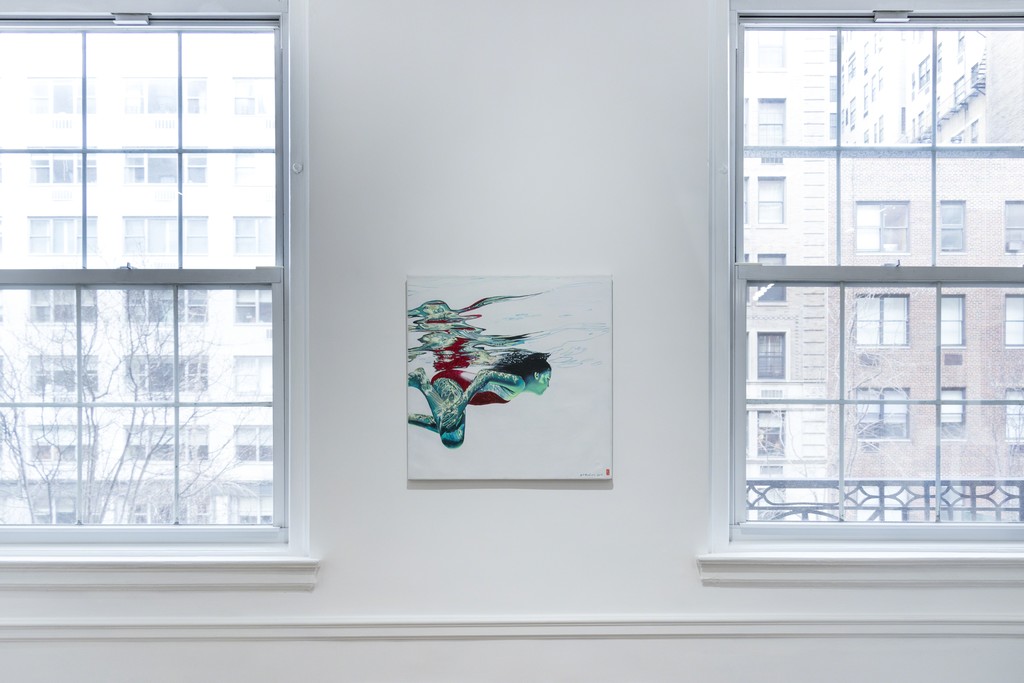 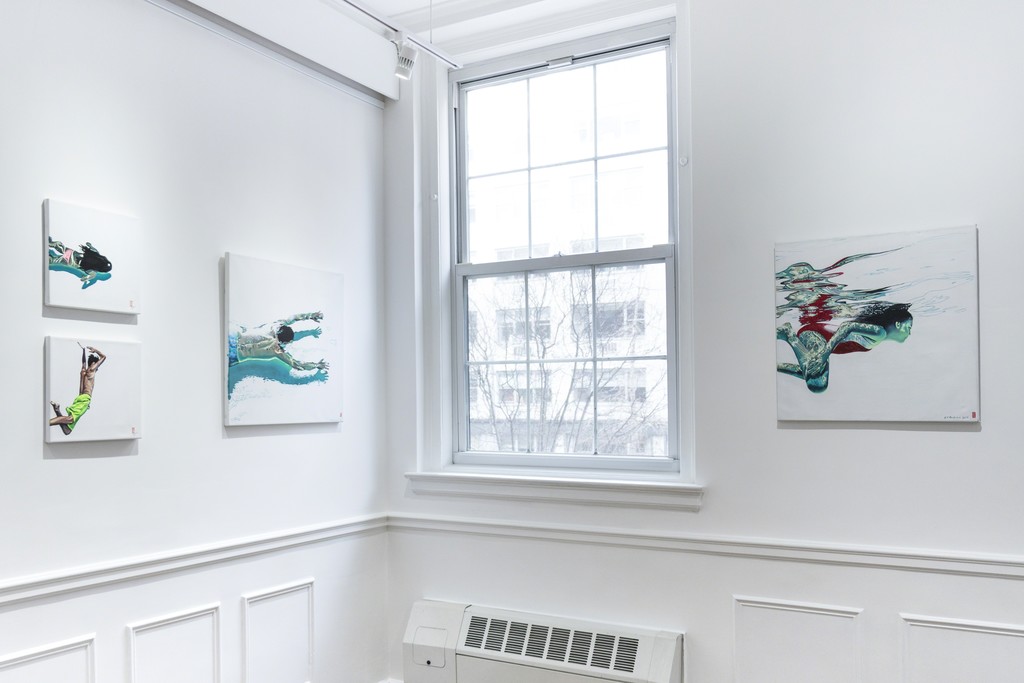 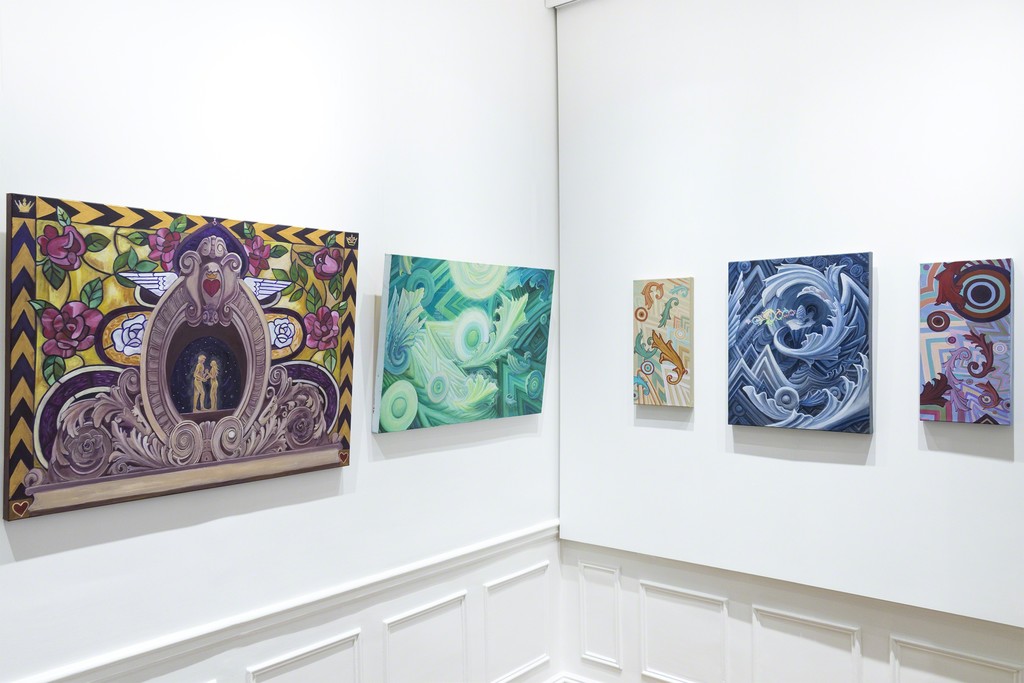 The Kate Oh Gallery is pleased to present the exhibition, Reflection, a two-person show featuring works by Brigitte Yoshiko Pruchnow and Joness Jones. Join us for the opening reception on Friday February 23 rd from 6-8pm. To view the show, please schedule an appointment with Kate Oh Gallery via email ([email protected]).

The title of the show, Reflection, represents the importance of light found in both artist’s work.The colorful, bright patterns, and dreamlike scenes of Jones’ artwork compliments the mesmerizing, reflective, and fleeting moments shown in Pruchnow’s artwork. Both artists aim to capture a sharpened perception of reality and the beauty of visible light and shadows. Like our eyes that can only see our surroundings if light reflects off the objects around us, their artworks reflect the light they see in the world around them. Visible light, or rainbows interweave throughout their work for all rainbow hues are hidden in white light and usually only a part of this ribbon of light can be seen. However, sometimes the whole bouquet of rainbow colors is seen once the light is fractured, which is embodied in their most colorful works.

Brigitte Yoshiko Pruchnow chooses ordinary moments as subjects for her paintings and drawings. At first sight they seem like photorealistic renderings of snapshots similar to those, which seem to stream endlessly through our life via social media. Each scene possesses a cinematic quality in its cropping of subjects, capturing of fleeting moments. But through the prolonged process of painting she aims forthe exact opposite, stretching the fleeting instant, making it special and outstanding. She reaches this effect by emphasizing the things, that onlookers are usually unaware of, like distortions, reflections, and shadows.

As a subject for her painting or drawings, she chooses shiny and reflective surfaces, such as water, glass, metal, views through windows with raindrops on them. But also, people, whose
appearance is affected by the surrounding light and shadow. Her works are imbued with tranquility that allows the onlooker to deeply submerge into a certain moment depicted. While mostly isolated in water or captured in a moment of loneliness and stillness, the people in her pictures still appear free and at inner peace, filling a void with their presence. If we then take illumination as a state of being, bathing in sunshine or looking at scenes with light streaming through them becomes an allegorical demonstration of inner brightness.

Brigitte Yoshiko Pruchnow is a German-Japanese painter living in Munich, Germany. She holds a diploma of the Munich Film Academy and a master degree in Japanology, Philosophy
and History of Art of the University of Munich. She used to study Japanese calligraphy in Japan, Chinese traditional ink painting and traditional Japanese painting technique (Nihonga) She was active in the graphic novel scene of Munich in the 1990s with several publications in magazines.

She also worked as a writer and director for documentaries, short films, and commercials. Pruchnow has had both group and solo exhibitions in Germany and Tokyo, and has had work
shown at art fairs in London, Paris, Tokyo and New York. Her works are found in collections all
over Europe, Asia, the U.S., Australia, New Zealand, Dubai, and Kuwait.

To Joness Jones, the ornate walls of New York City all but talk. They silently tell stories of Gods, Goddesses, heroic archetypes, and strike a chord within our subconscious as symbols of strength, mystery, and beauty. Created by the hands of immigrants and the following generations of their natural-born American families, these architectural icons are an immortalization of a past that we are born out of, and the groundwork for the future we are building.

Past &present, intellect&intuition, art&life all come together in unity through the latest collection of paintings by Joness Jones. The splendor of past generations takes on new life, as contemporary New Yorkers are invited to see themselves as the living embodiment of the greatness that surrounds them. The paintings honor the legacy of the determined creatives and dreamers who literally paved the way make the metropolis what it is today.

Joness Jones is fascinated by the idea that everything arises seemingly out of nothing, to be seen for a time, before disappearing again. The ephemeral, ever-changing nature of life became the subject of her works. To symbolize this abstract concept, Joness developed a pattern language of chevrons, circles, and ornament.

Joness Jones is a painter based in Woodstock, New York. Her first major works were murals,
and live performance paintings produced at more than 100 global festivals and concerts. To
advance her skills, she began ongoing studies at CoSM, an art center in the Hudson Valley of
New York from 2012 - 2017. Her work is dedicated to the exploration of the infinite patterns
found in nature and humankind. She is on a mission to showcase the interconnectedness of all
life.