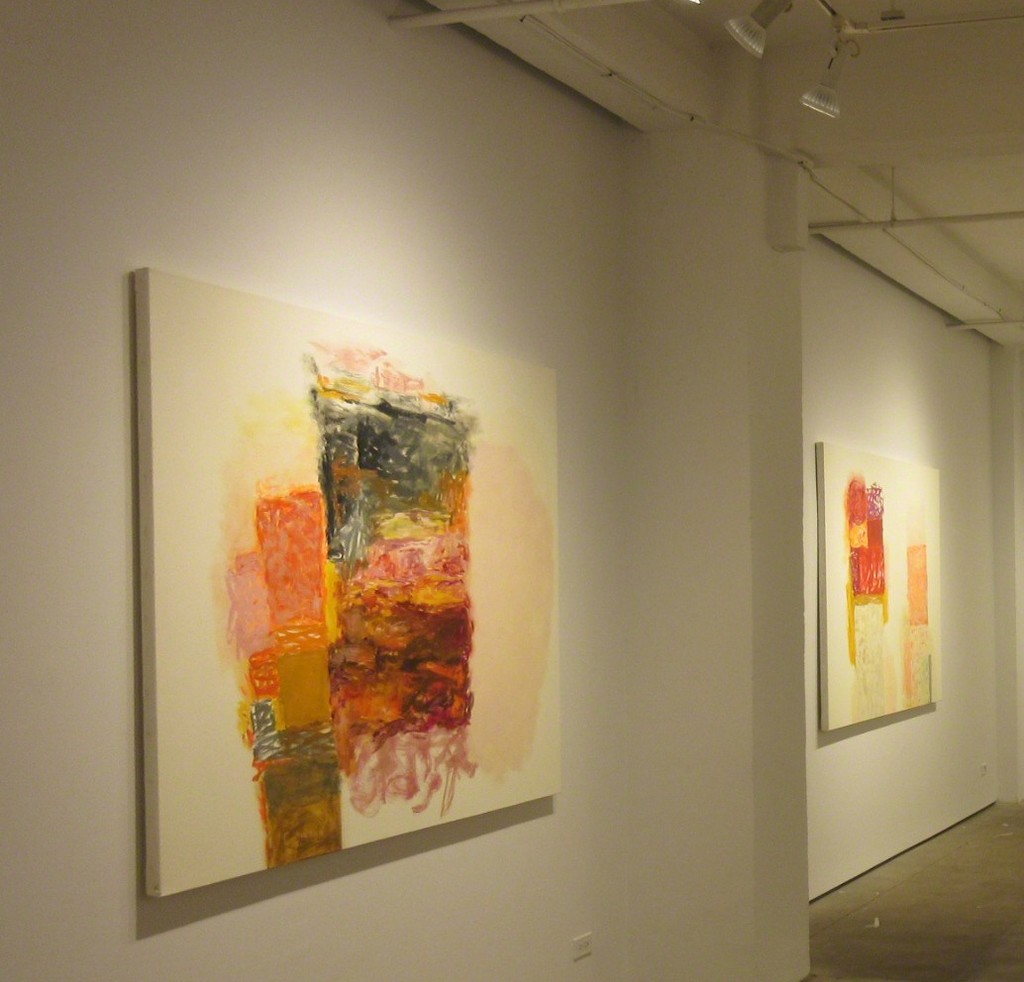 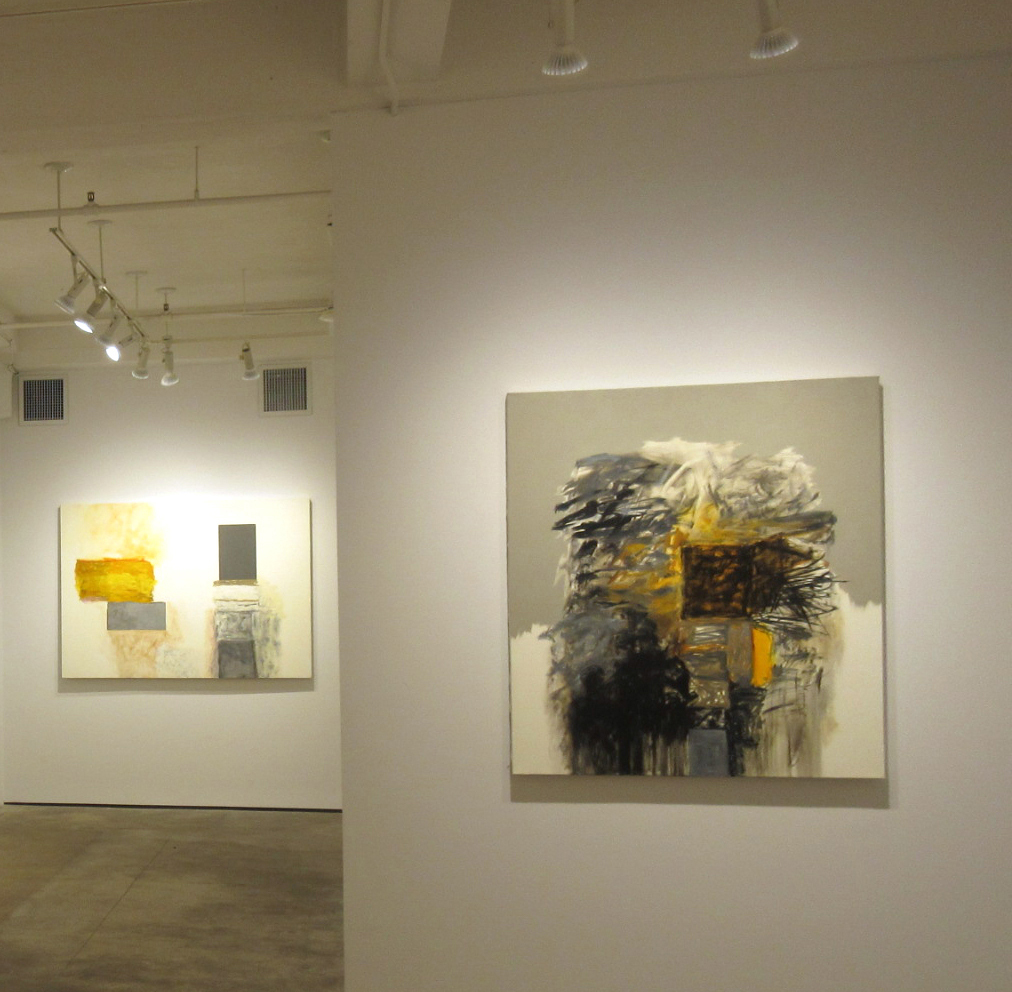 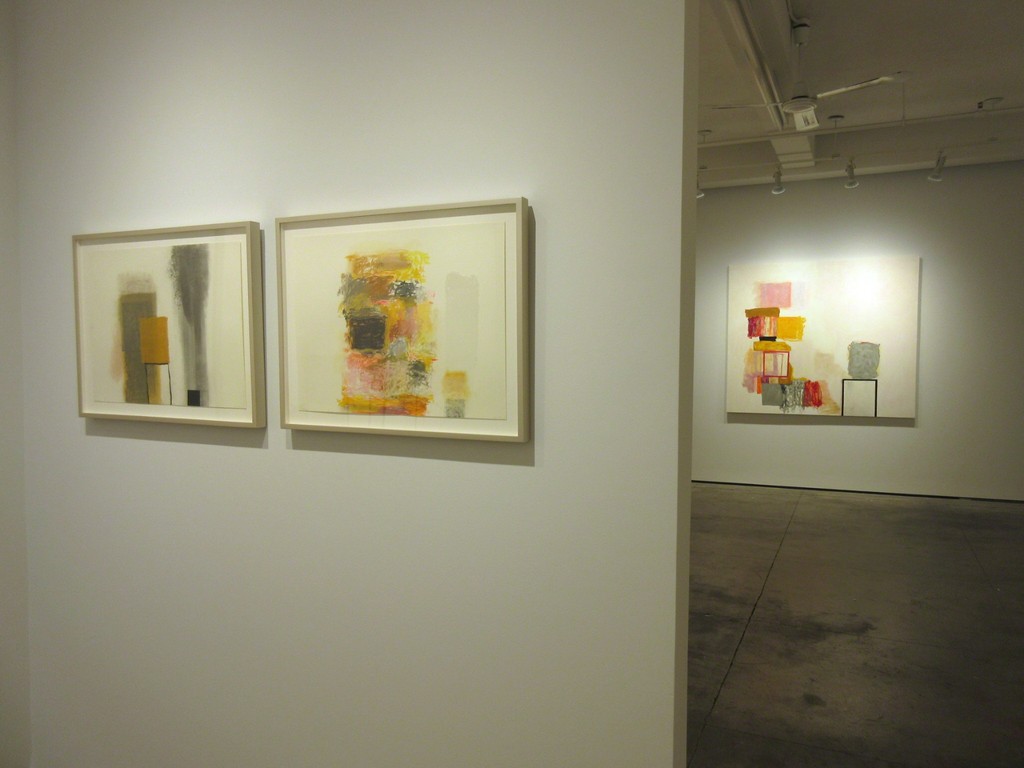 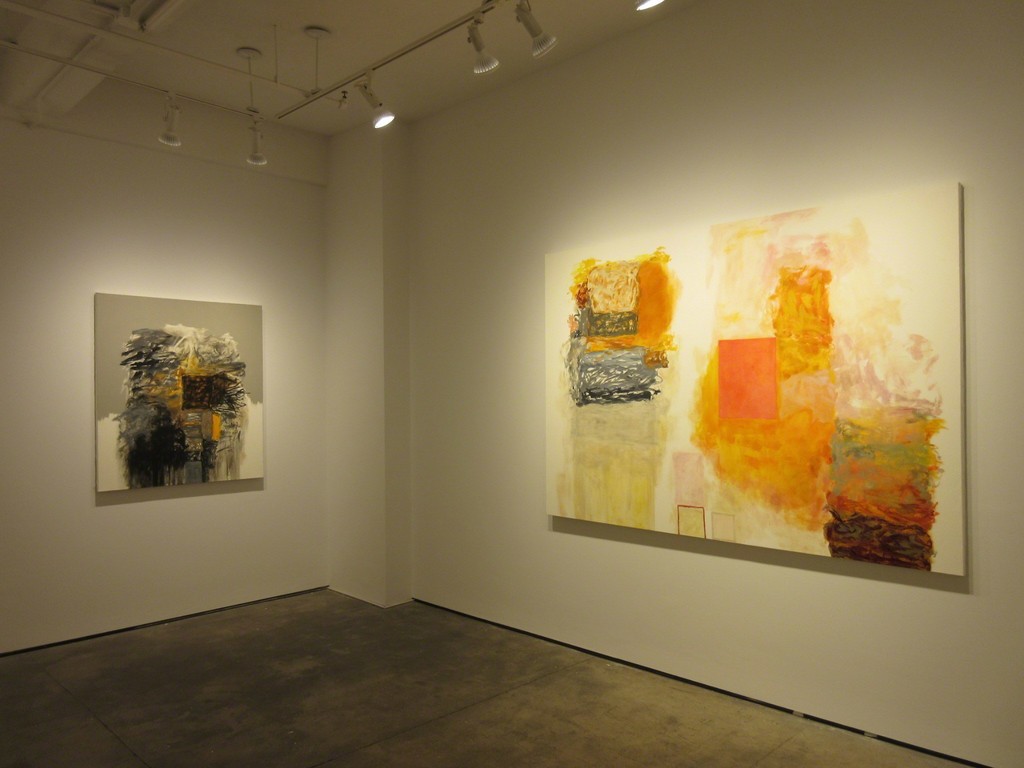 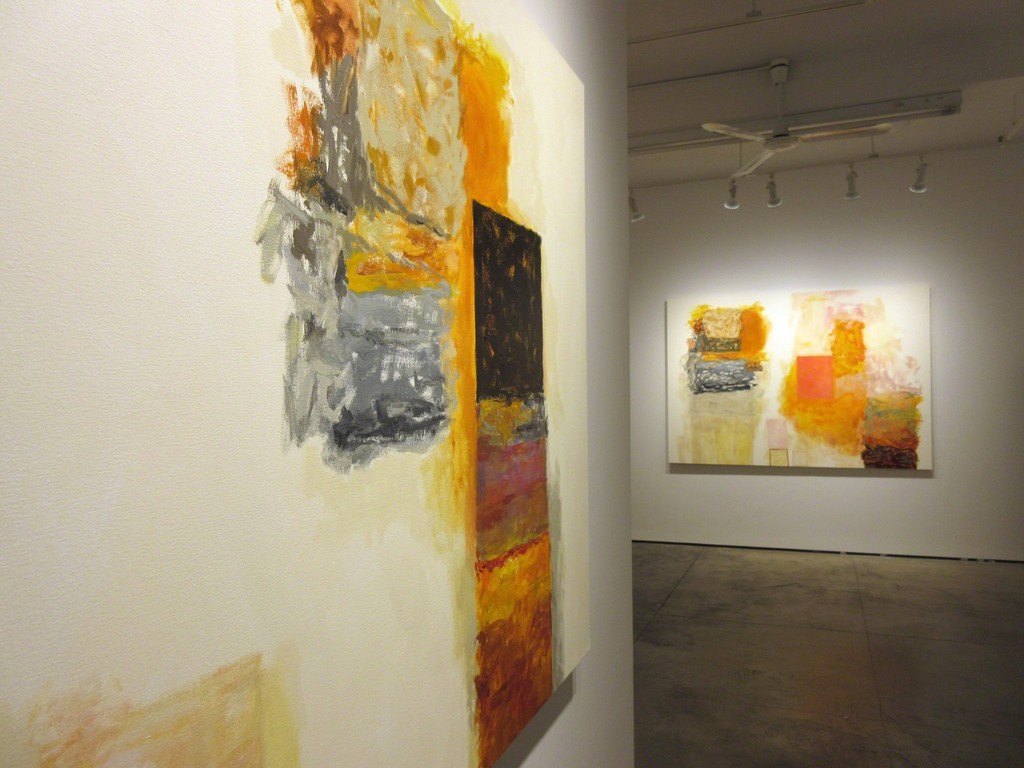 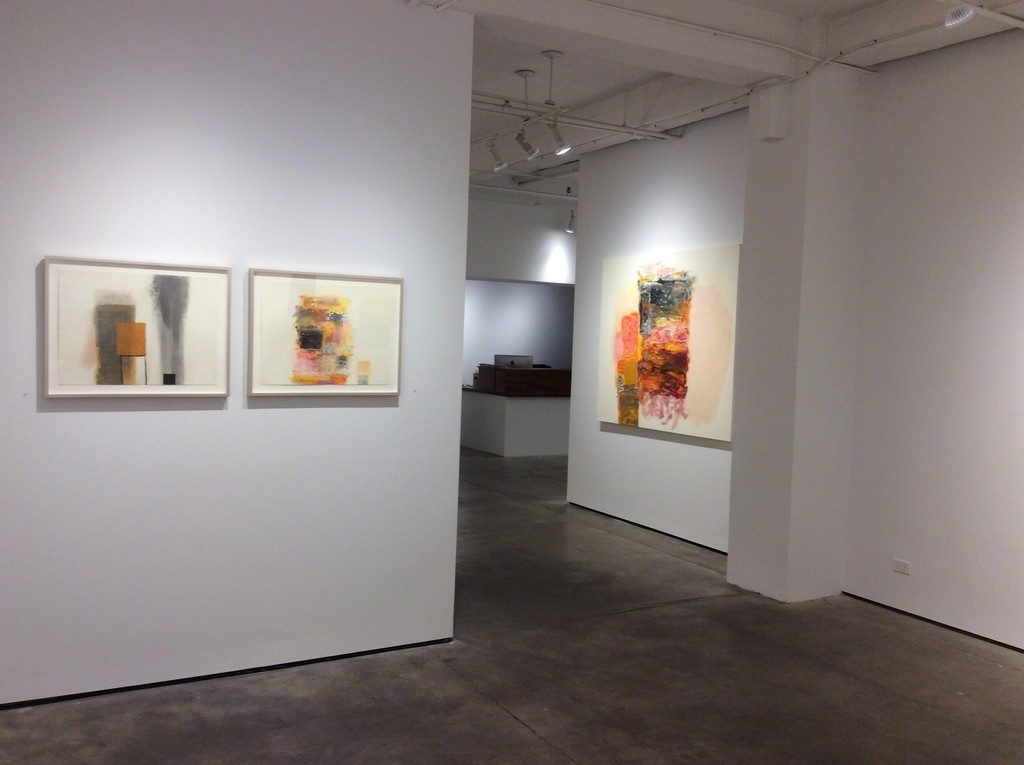 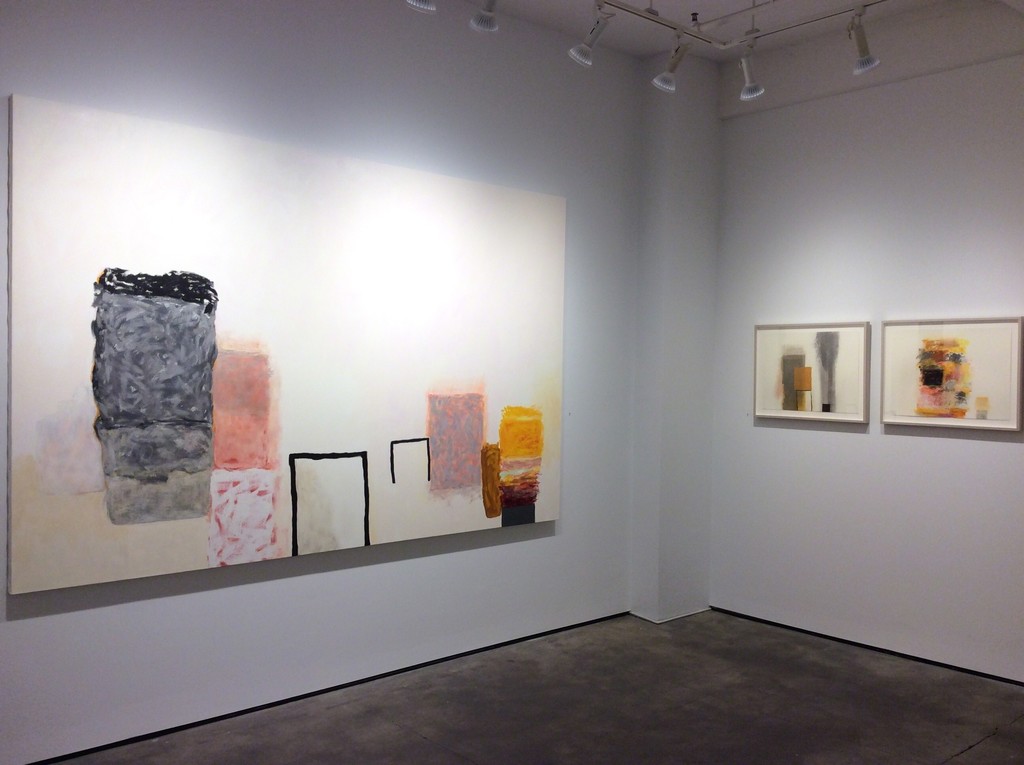 Kathryn Markel Fine Arts is pleased to present "Neither Here nor There," a solo exhibition featuring new paintings and works on paper by Rocío Rodríguez.

Rocío Rodríguez began her current body of work by re-examining her practice of loose narrative abstraction. She drew freely through her ideas, like diary entries, breaking down her visual language into its constituent parts. Out of this process, singular forms and shapes appeared, that occupied fixed and transient spaces on the same picture plane. What evolved was a new series that examines abstraction as representation. They do not tell a story, rather, they discuss the nature of painting itself.

The series distills the image into Rodríguez’s elements of mark making. These elements are stacked up and totem-like, to elevate the parts of a whole. Frantic, gestural crescendos are questioned by quiet, solid rectangles. The rectangles seem to be floating while others are anchored to a horizon, edge, or pedestal in various states of appearing. The indeterminate spatial references, and fractured mark-making create equivocal metaphors within the work. The images are resolved by the revelation that nothing is everything, and eventually ephemeral. The title of the exhibition “signifies ‘the transitory’ and implies paradoxical space where abstraction and representation can meet to form a whole.” (Rodríguez).

Rodríguez recently completed a residency at Marfa Contemporary, TX, where the desert landscape inspired the palette and spatial relationships of the work in this exhibition. Along with paintings and drawings, past work in this series has also included temporary, large-scale, site-specific wall drawings. Notably, a 10 x 16ft work exhibited in July 2015 at Marfa Contemporary, and a 12 x 21ft wall drawing was commissioned for the High Museum of Art in Atlanta in 2013.

Rocío Rodríguez exhibits across the US and is the recipient of numerous awards and residencies, including Artadia Award in Atlanta, Artist in Residence at Fundación Valparaiso in Mojácar, Spain, and Visiting Artist at the American Academy of Art in Rome. Her work can be found in many prominent public and private collections such as the High Museum of Art, Atlanta; Hartsfield International Airport, Atlanta; Museum of Art, Fort Lauderdale, Fl; New Orleans Museum of Art, New Orleans. Rodríguez holds an MFA from the University of Georgia. She lives and works in Atlanta.