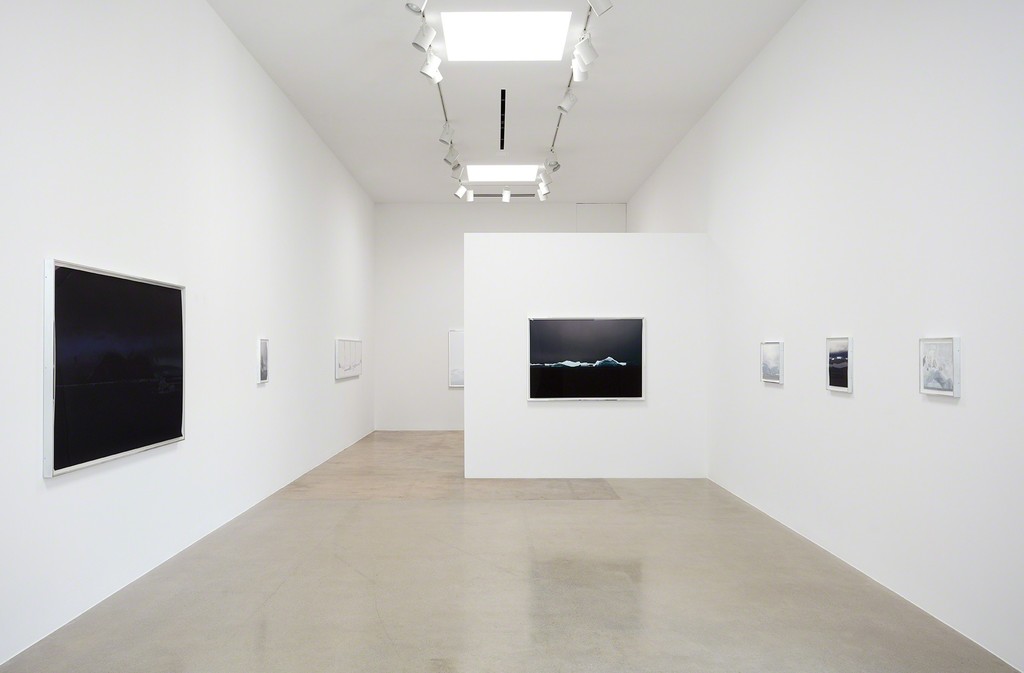 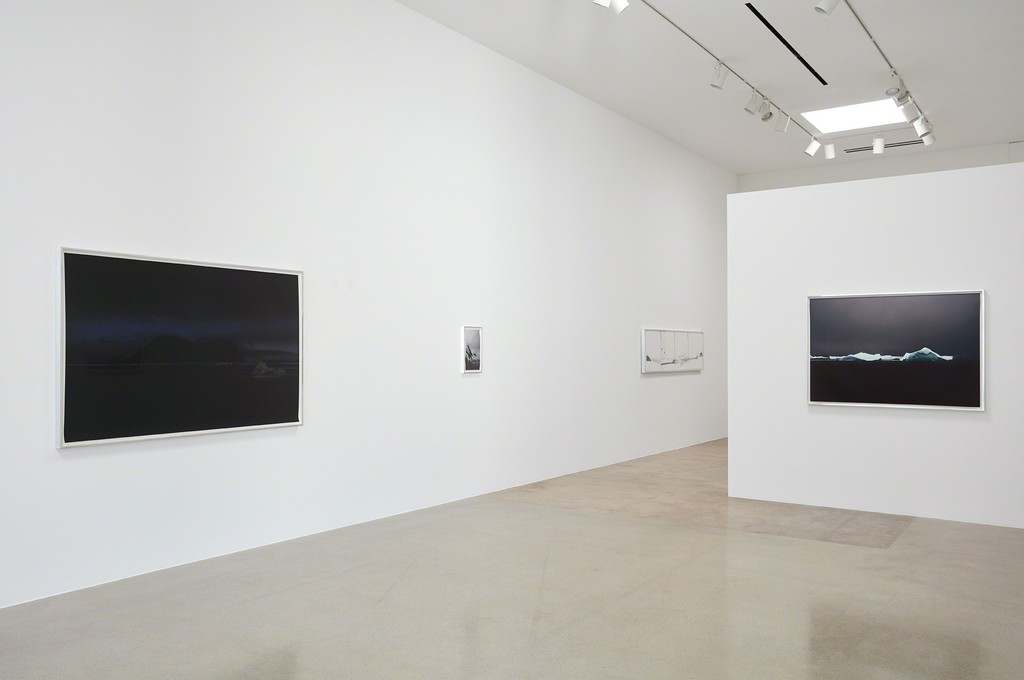 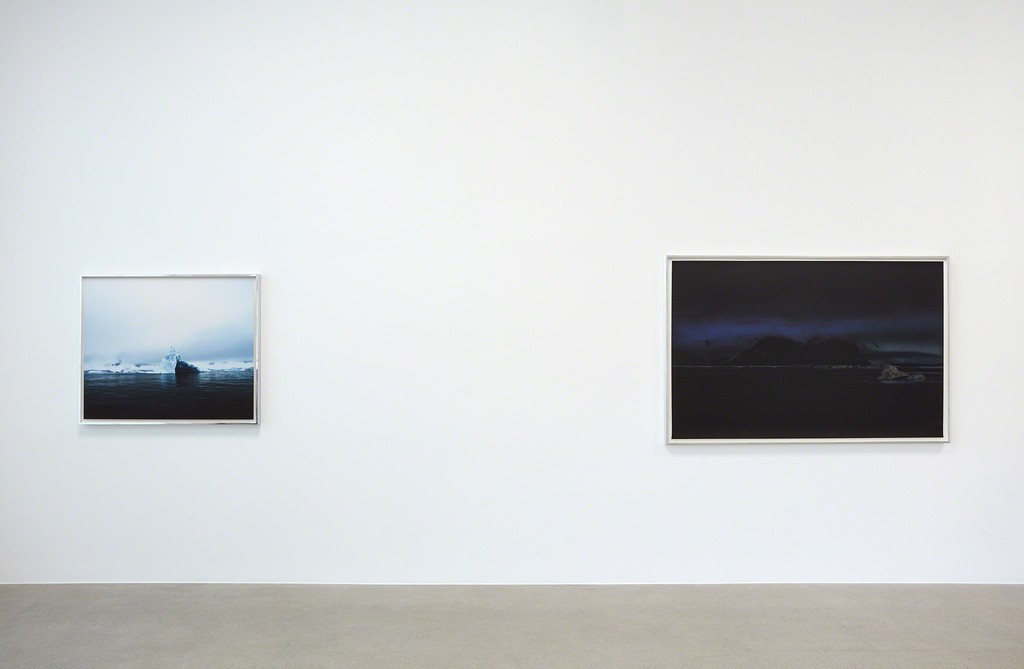 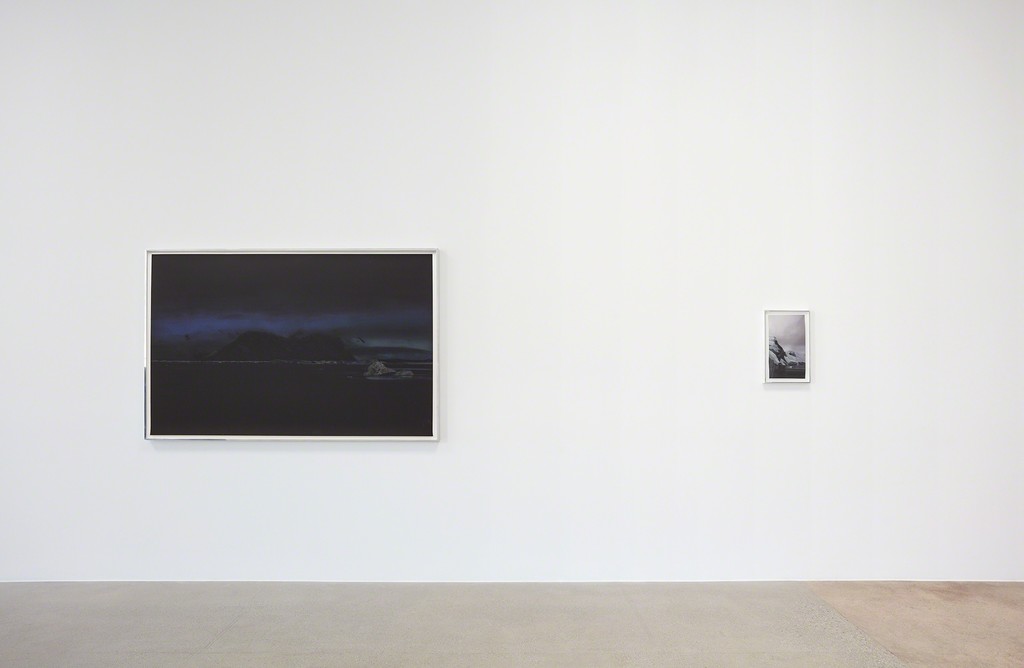 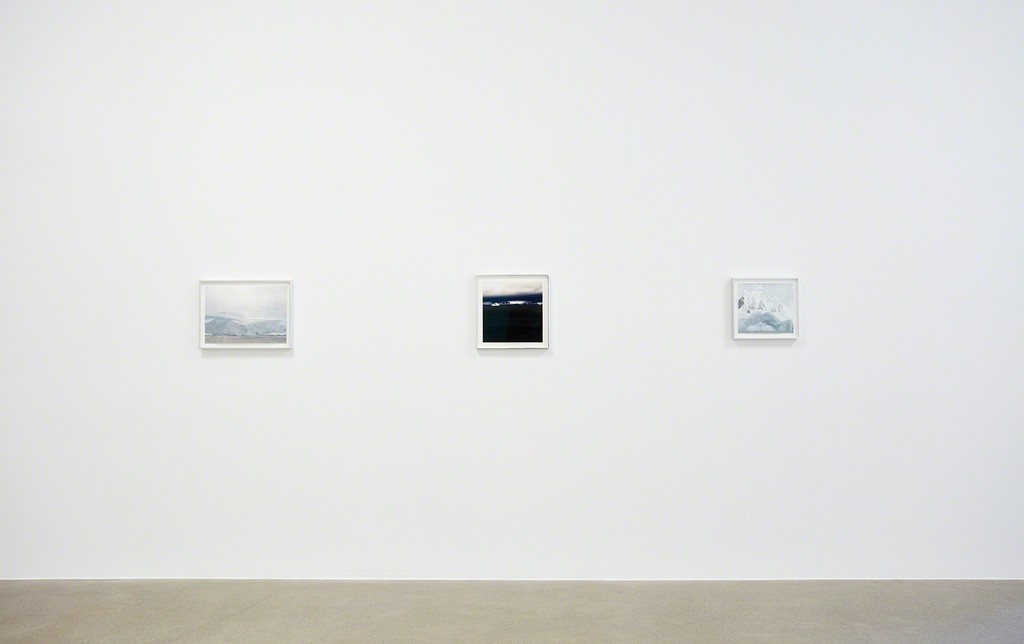 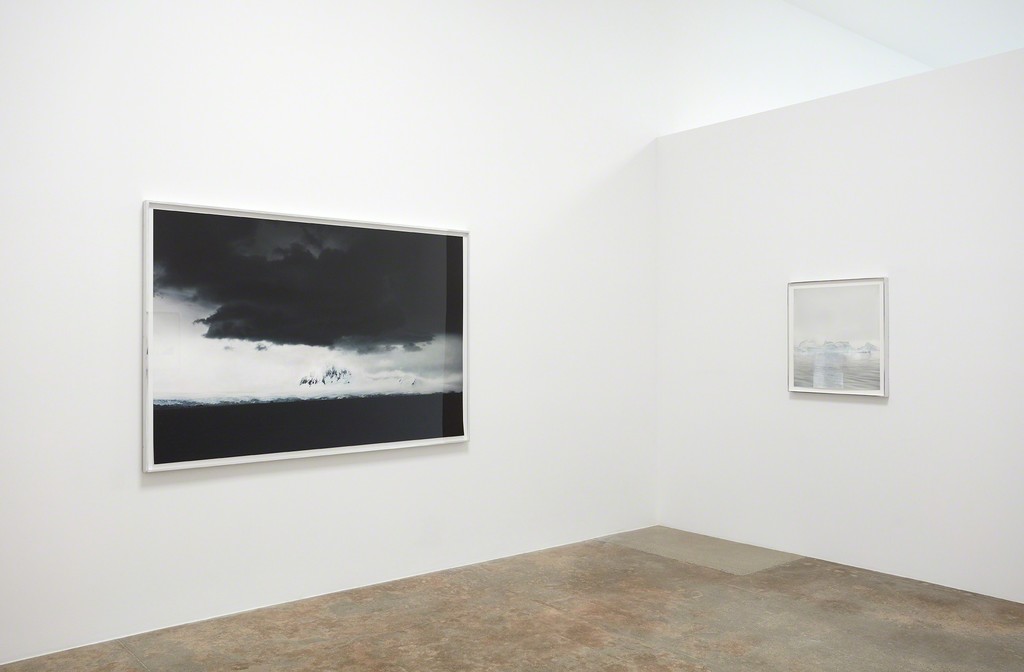 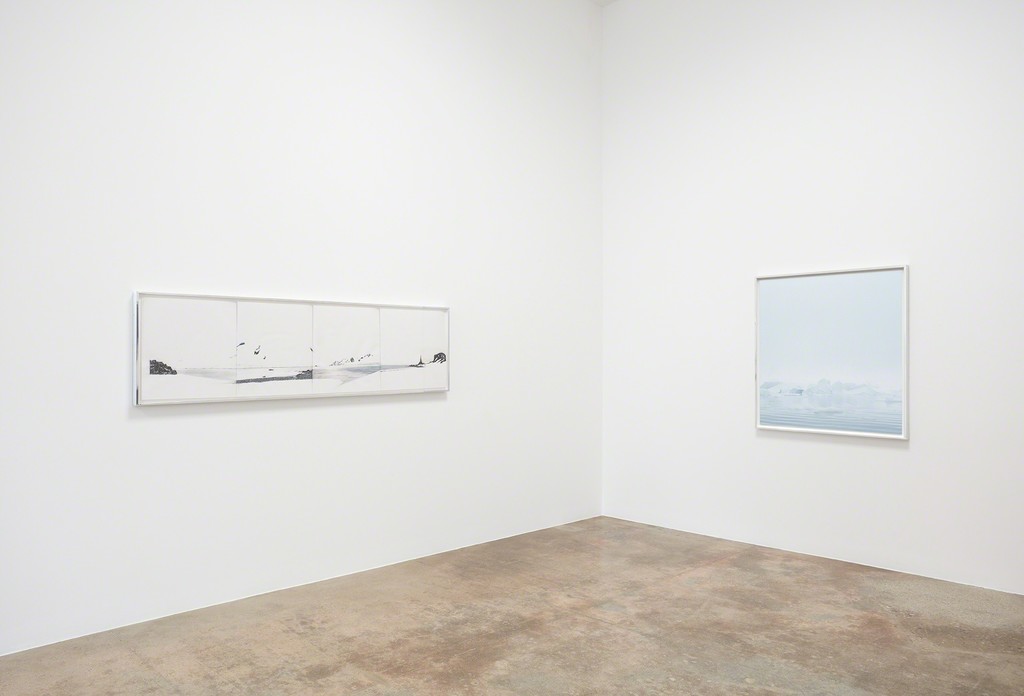 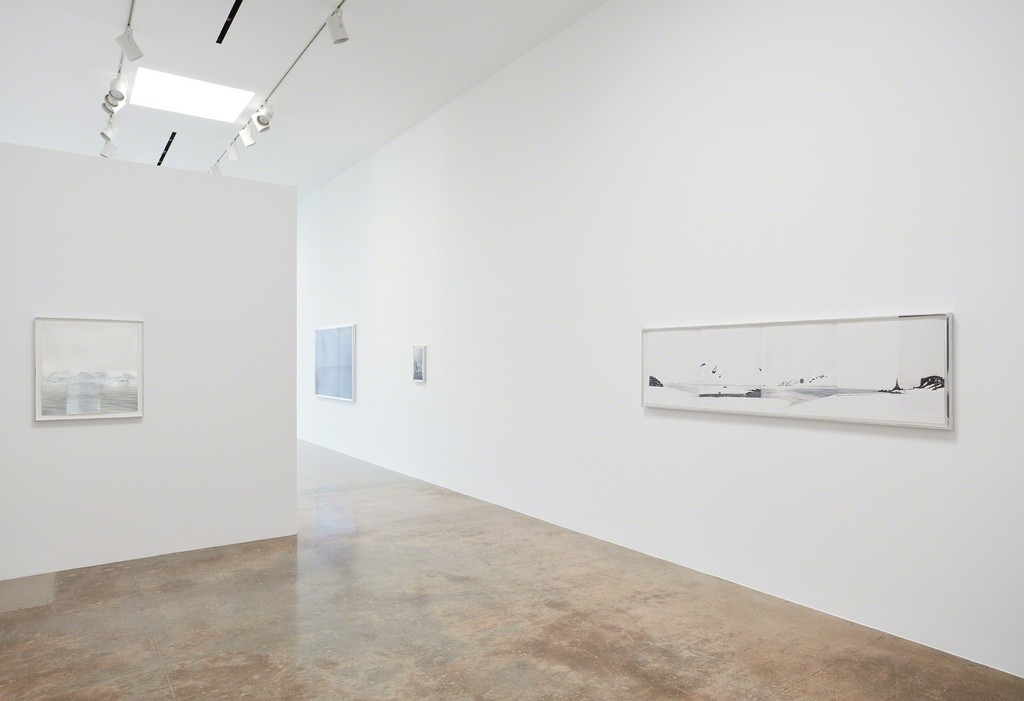 When she first encountered Antarctica, Ryan struggled to believe that the land she saw was real. After immersing herself in the landscape both on foot and in a kayak, she began to absorb the reality of the place, but her greatest challenge became how to document the experience. One cannot “capture” Antarctica on film or with anything else, Ryan recalls. Instead she chose to communicate how Antarctica feels by collaborating with the landscape in this continued body of work. She traces the curves of the glaciers and icebergs with charcoal, ink and graphite both to remember and to emphasize the preternatural architecture. She attempts to match the landscape’s palette with her markings and highlights shapes and colors easy to overlook in photographic documentation. This hybridization has long been part of Ryan’s process of combining her photographic imagery with drawing, painting and collage.

While her trip lasted only a few weeks, Ryan extended her stay in Antarctica indefinitely by becoming deeply immersed in her work in the studio. She has researched the area extensively through reading fiction, nonfiction and critical analyses. Now two years after being in Antarctica, Ryan is still exploring and trying to understand its impact. Antarctica activated a critical recalibration for the artist. Previous work obliquely referenced landscape and included intellectual questioning of environmental exteriors but was not directly concerned with landscape or environmental issues. The undeniable power and aliveness of the South Pole shifted Ryan and left her with a deep reverence and commitment to protecting the environment. Ryan believes it is her responsibility to share the complex, multi-faceted significance of this disappearing and critical continent.

A selection from the Antartica series will also be presented at Art Los Angeles Contemporary, January 25 – 28, 2018.

Liza Ryan uses her work in photography, video and mixed media to address a variety of intellectual pursuits. Her themes include redefining the terms: animate and inanimate and questioning established hierarchies, the presentation and disruption of the visual narrative, and the fluid psychological relationship between real and imagined spaces. Her work draws from research into subjects as varied as film, literature, music, dance, science, and poetry. Integral to her process is travelling to study her obsessions first hand, whether it be falcons or icebergs.

Liza Ryan’s work has been exhibited both nationally and internationally. She was selected to exhibit at the Biennale of Sydney (2006), for which she created the large-scale mixed media installation Something tells me she didn’t look back. Ryan has been included in museum exhibitions at The Rijksmuseum, Amsterdam, Netherlands; The Museum of Fine Arts, Houston; Los Angeles County Museum of Art; and Miami Art Museum. She has also been the subject of solo exhibitions at Reed College’s Douglas F. Cooley Memorial Art Gallery (cat.); The Herter Gallery at the University of Massachusetts and Hollins University Art Gallery in Virginia. Her work is also held in the permanent collections of the Los Angeles County Museum of Art; the San Francisco Museum of Modern Art; the Museum of Fine Arts, Houston; and the Maison Européen de la Photographie, Paris, among others. In 2009, The J. Paul Getty Museum announced its acquisition through a gift from Manfred and Hanna Heiting of a thirty-foot long multi-paneled photographic work which was included in a group exhibition at the Getty in 2016. A full survey of her work will be published by Steidl/IAR in 2018. Liza Ryan lives and works in Los Angeles.