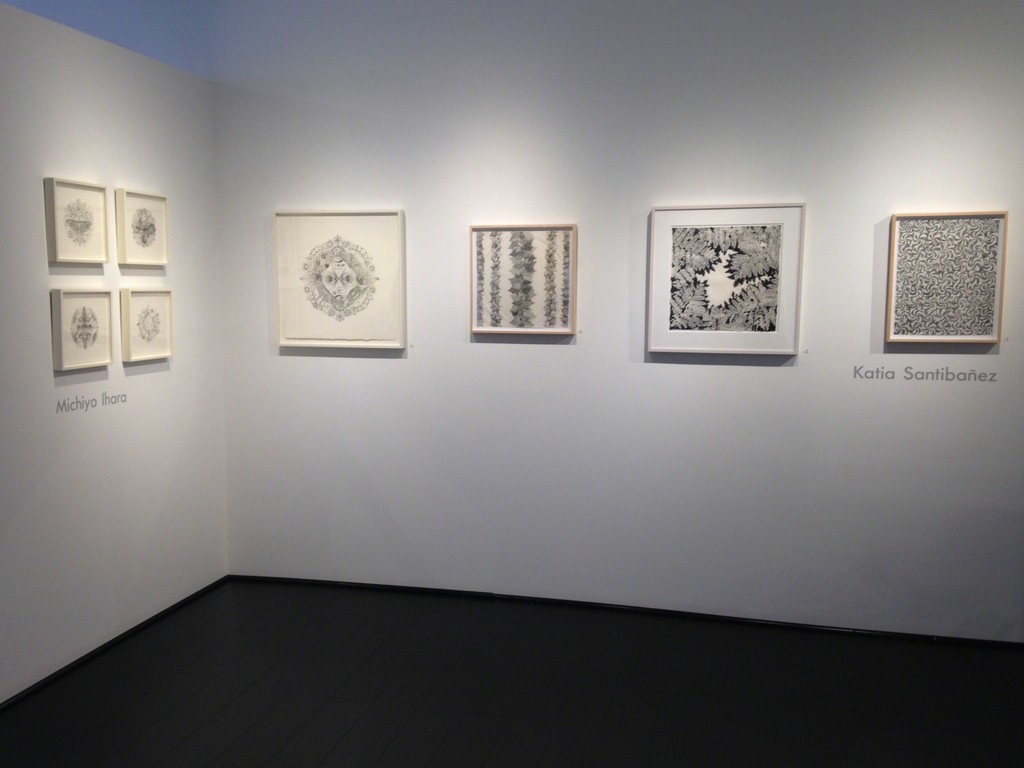 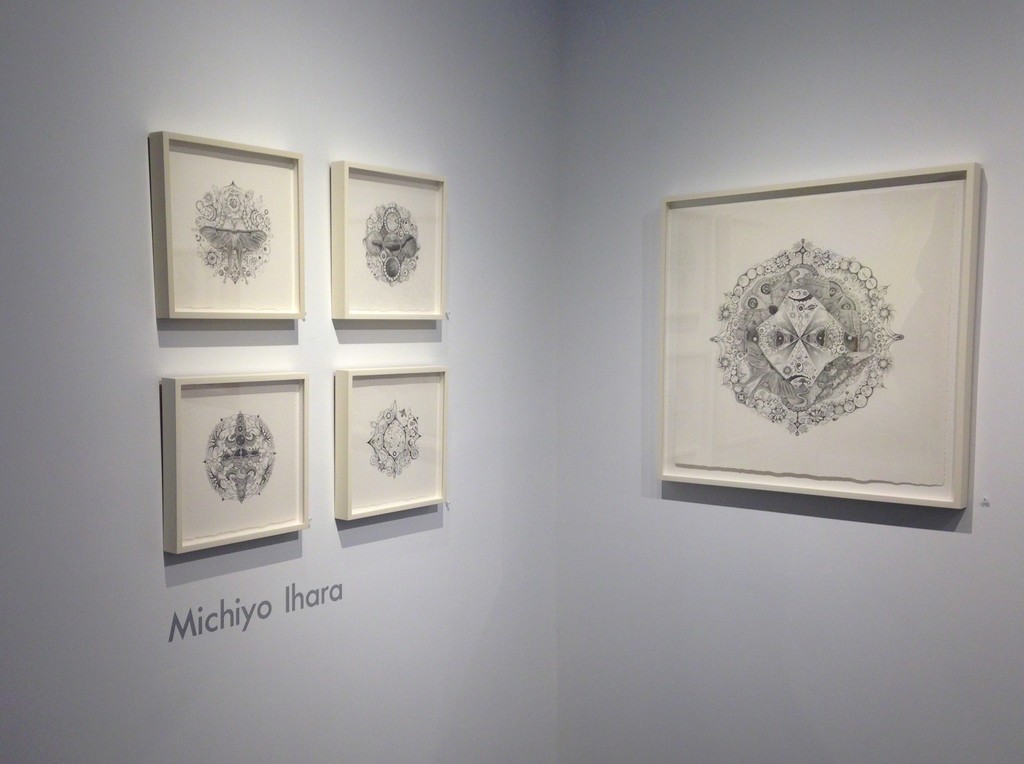 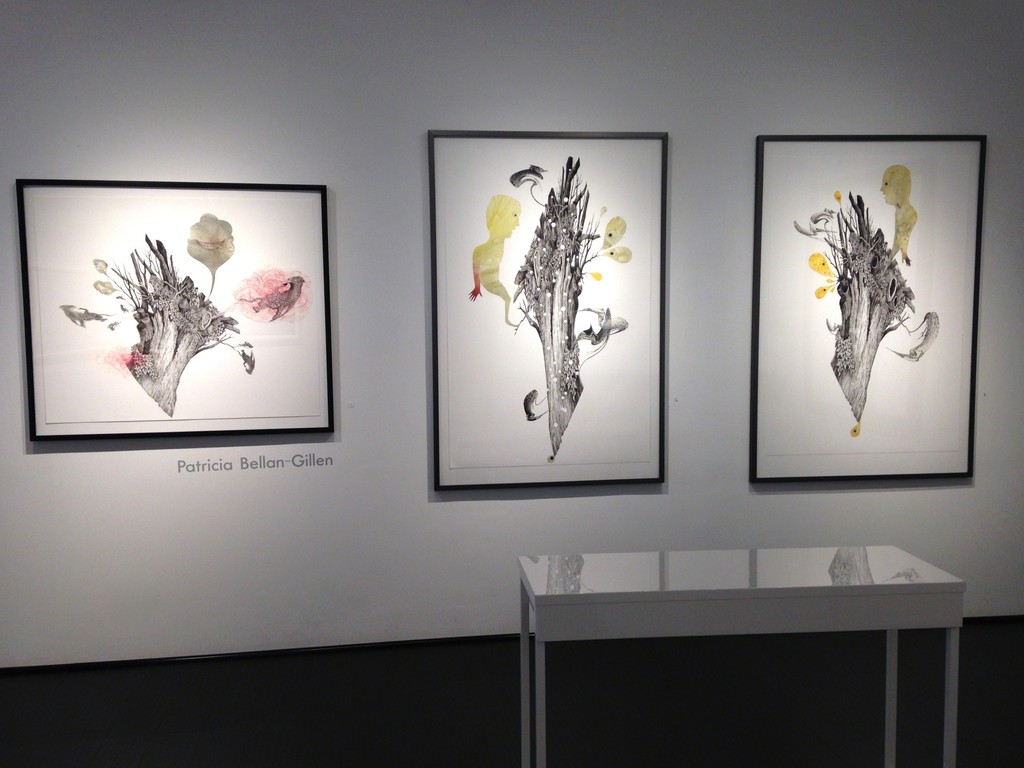 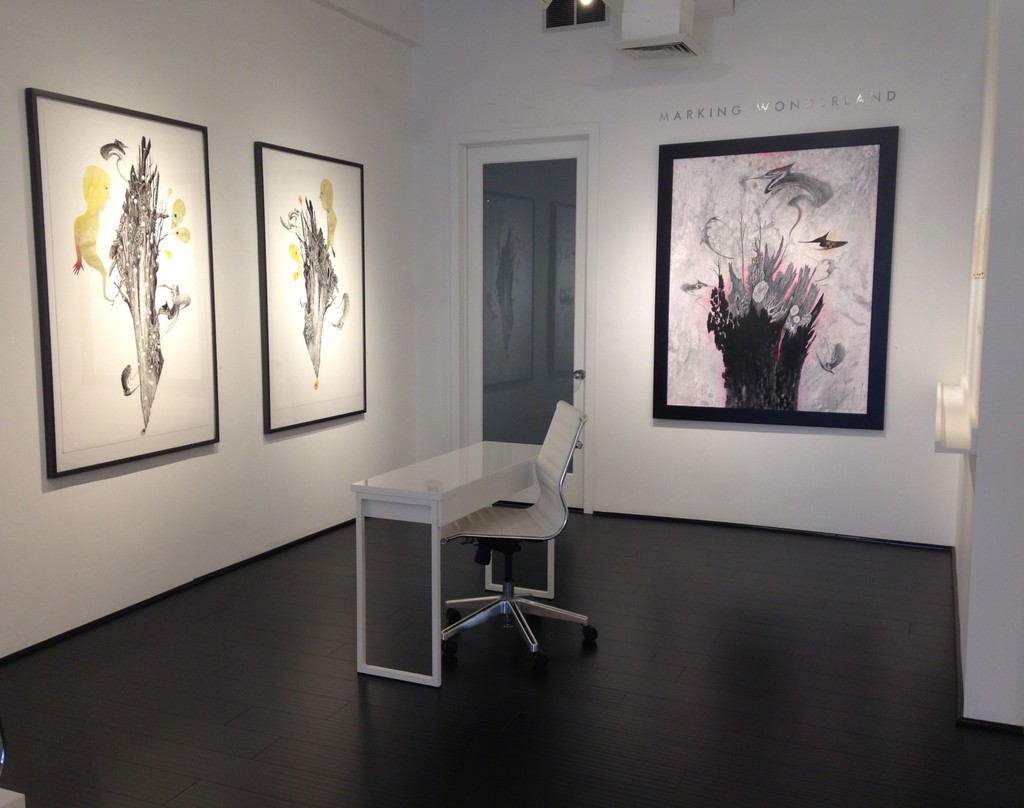 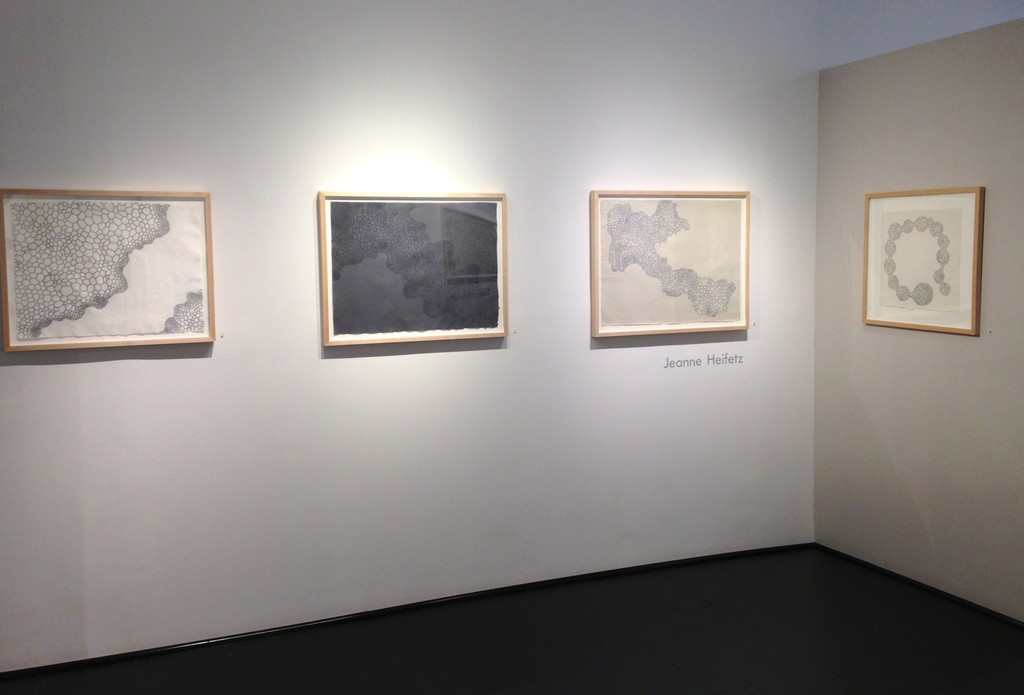 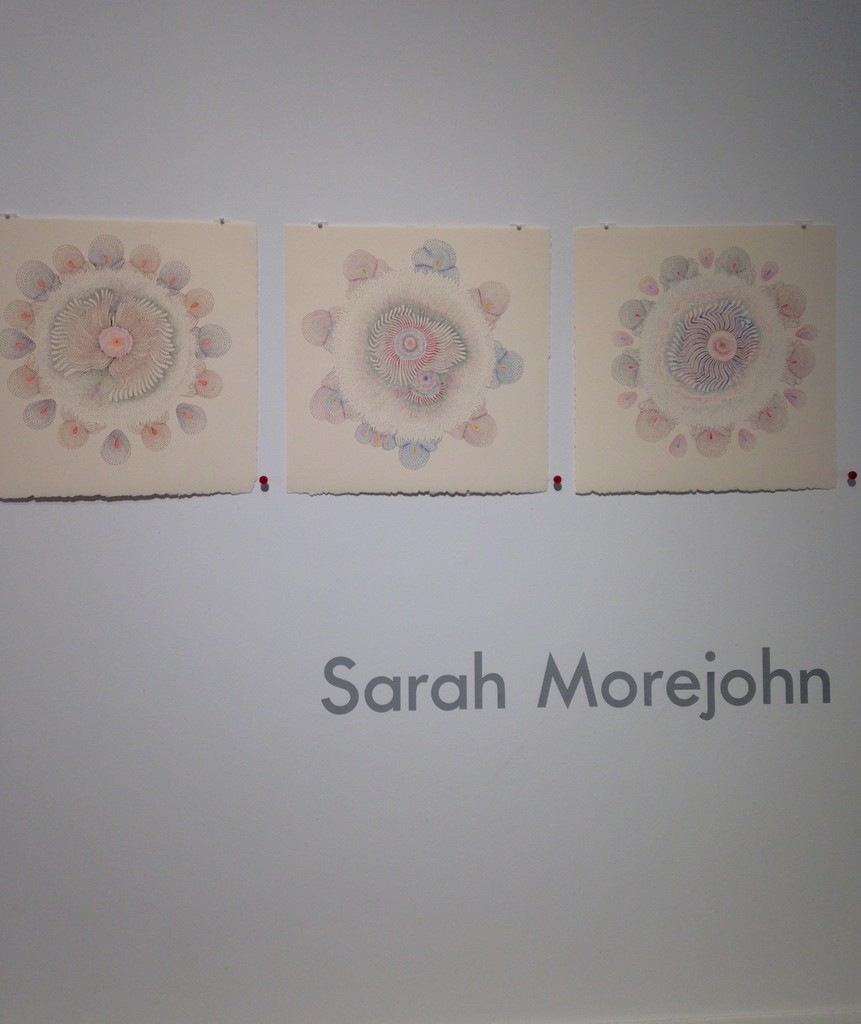 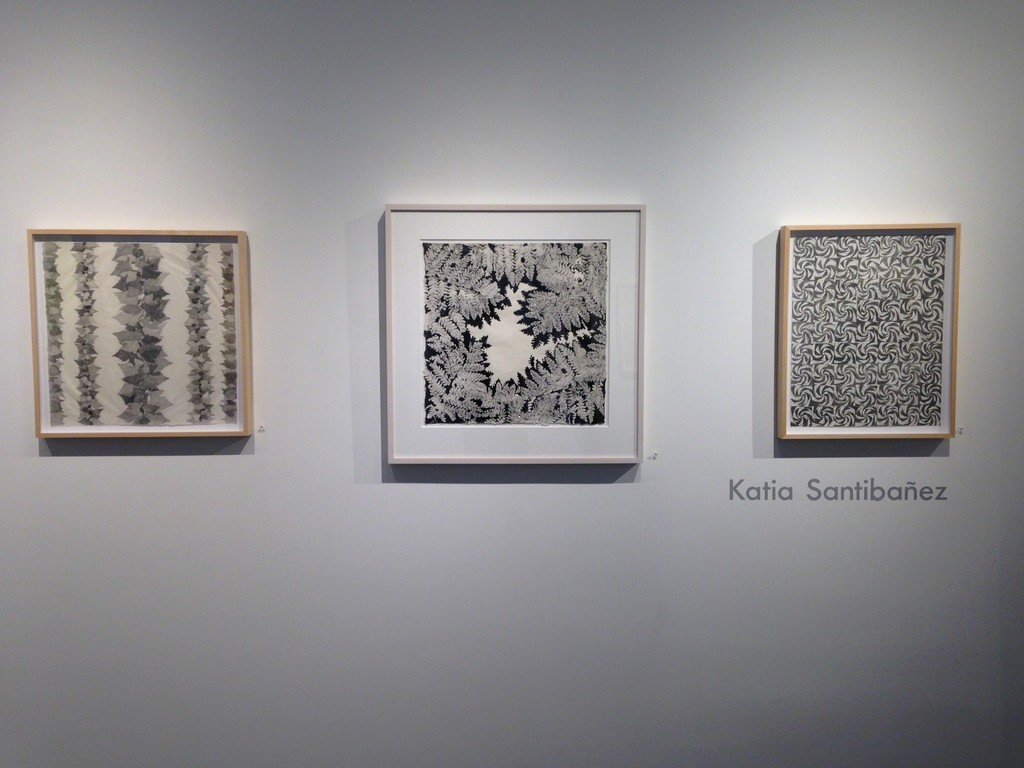 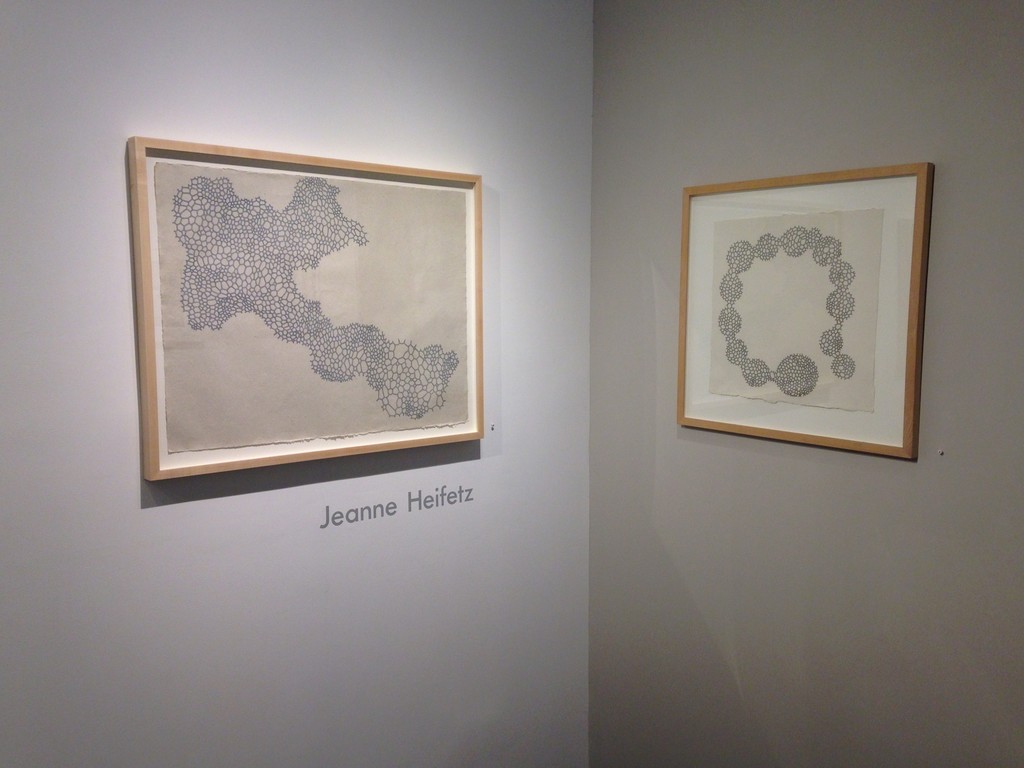 Patricia Bellan-Gillan’s drawings are the largest in the exhibition, made on a scale that has transitionally been more associated with painting than drawing. This work is from the Phantom Limb series, a body of drawings and prints that address the dichotomy between nature’s propensity to be both nurturing and destructive, often simultaneously. The curious drawings are both closely observed, nearly illustrative, representation of plant and animal life and the warping of recognizable forms and predictable interactions. The artist says, “I want to achieve a weird elegance. I welcome provocation and puzzles”. Well said, and well done, the drawings are mysterious indeed. Bellan-Gillan earned an MFA from Carnegie Mellon University in Pittsburgh where she was a professor of art until her retirement this year. Her work has been shown extensively in the United Sates as well as New Zealand, Belgium, Italy, Japan and Scotland, to name a few.

Jeanne Heifetz builds her drawings systematically. Borrowing from nature, she presses Plateau’s laws, which govern the branching and growth of many natural forms, into artistic service. In the self-imposed parameters between structure and improvisation, the artist makes hundreds of tiny sequential decisions. Each ink drawing grows mark by mar in slow accretion. Heifetz’s material imposes its own added limitation; the ink indelible and the drawn line irrevocable. In the process, each tiny decision is irreversible, like scars and other indices of the unidirectionality of human lives. Working for hours at a time at the micro level, the bigger picture, so to speak, does not coalesce until the artist steps back from her table. In this way, the making of work can be viewed as a metaphor for life: a series of incremental choices whose full import we may not know for years. Heifetz earned degrees in art from Harvard University and New York University. Her artwork is widely exhibited throughout the United States.
Michiyo Ihara continues her graphite snowflake series drawings, now numbering over 150. Ihara’s meticulous drawings are entirely hand-drawn; her draftsmanship and details are unmatched. Organized on a square sheet of warm white paper, the pencil drawings occupy the middle of the space and reach away from the center with nearly symmetrical, lacy, cell-like layers. The drawings describe contained worlds, each unique as snowflakes. Ihara holds dear the notion that everything in nature originates from the same source and is born in the infinite possibilities of the universe; from the microcosm grows the macrocosm. Ihara choses the snowflake as a familiar representation of this idea, so each tiny snowflake becomes a symbol of the entire universe, every one appreciated for its uniqueness and diversity. Educated in Japan, Ihara lives in Brooklyn and shows her work in both the United States and in Japan. The gallery has represented Ihara since 2008.

Sarah Morejohn’s petite ink and colored pencil drawings contain a universe in just ten by ten inches of paper. Delicate clusters of dots call to mind many things in the natural world: murmurations, constellations, bacteria, landmasses, a small spiraling shell found on a beach. Each of Morejohn’s tiny decisions, where to place the mark, where to begin, where to stop, reflect her perception of the patterns and rhythm of nature. Losing herself in the process of the making, the artist’s time and patience morph into observations like that of a scientist, explorer, astronomer. Her drawings allude to nuanced possibilities of emotions such as tenderness and longing. Morejohn earned a BFA in painting and drawing from the University of Oregon in 2011. The artist lives in Oregon.

In her drawing, Katia Santibañez finds the sweet spot between order and chaos, nature and man-made architecture and artifice. Beginning with the organizational structure of the grid, Santibañez explores different but complimentary visual language to find the place where the conversation about beauty begins. Building her drawings with repetition and structure, the artist brings geometric abstraction together with natural forms taken from leaves, ferns and trees. The mysterious worlds she creates lead the curious viewer to question the relationship between macro and micro, between the natural and the synthetic. The French artist was educated in Paris and lives in New York. Santibañez’s work is in the collections of The Morgan Library, New York, NY, Albright-Knox Art Gallery, Buffalo, NY, The Metropolitan Museum of Art, New York, NY, and The Museum of Modern Art, New York, NY.

Please contact the gallery with requests for images or further information.