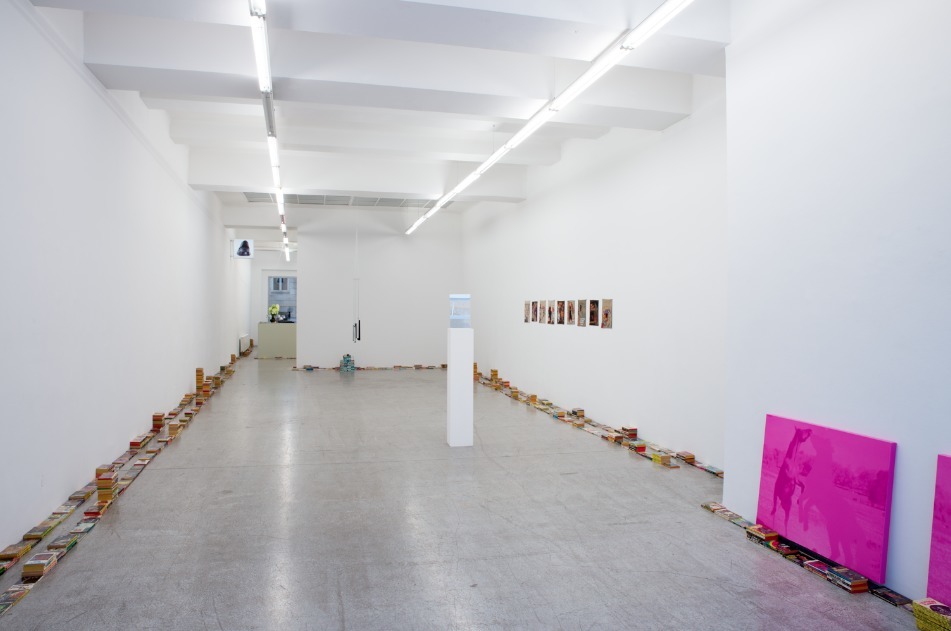 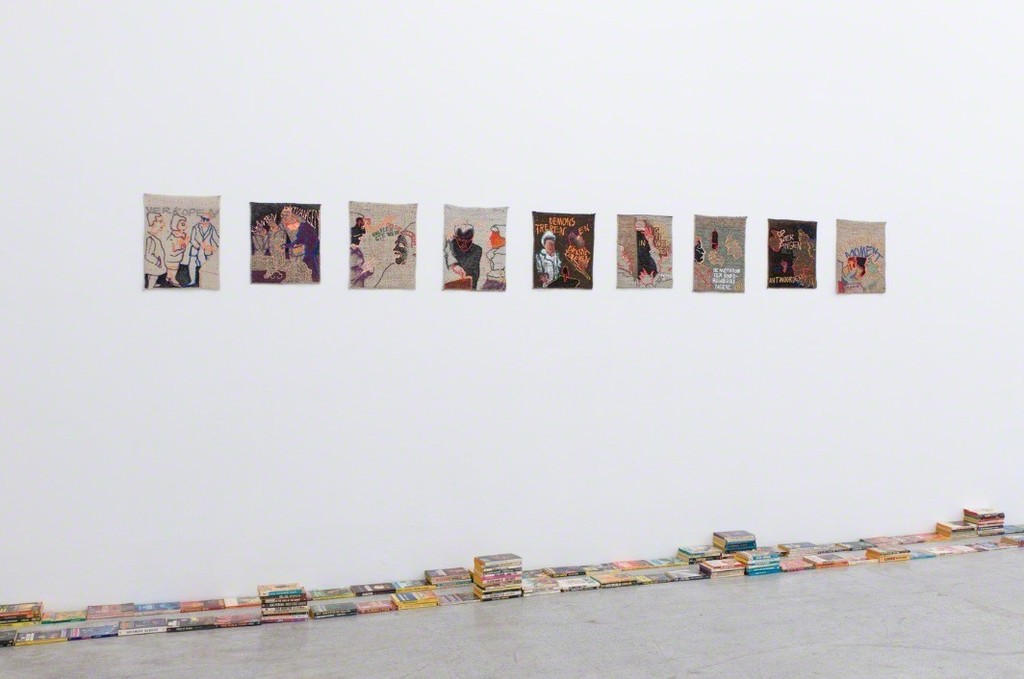 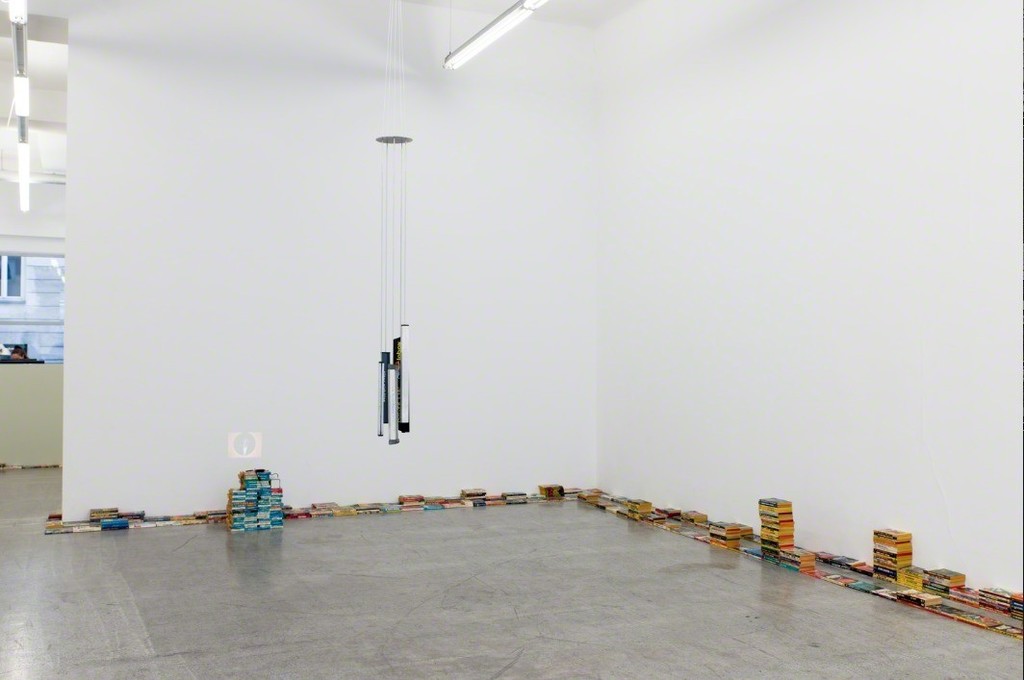 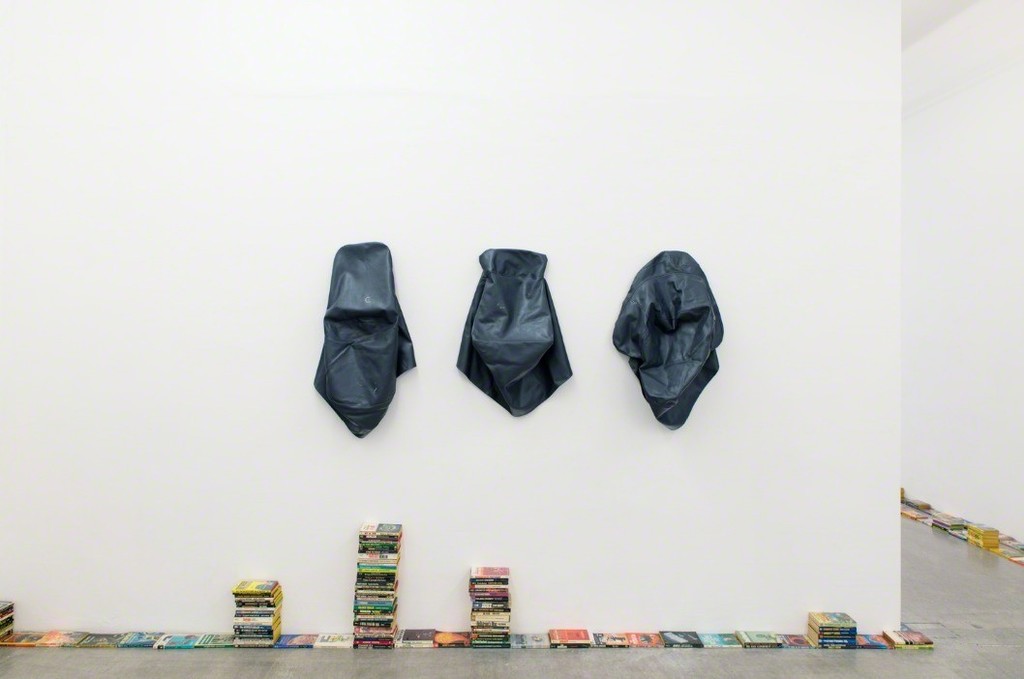 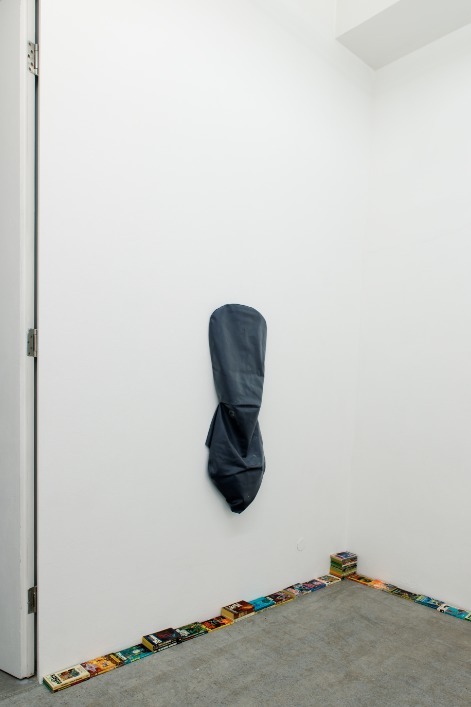 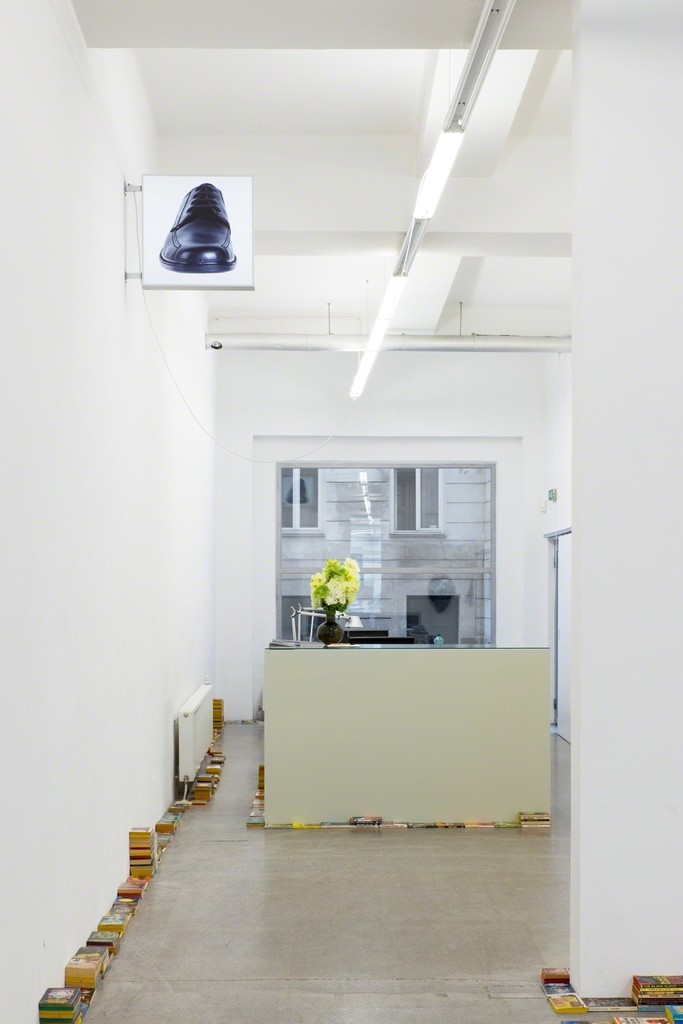 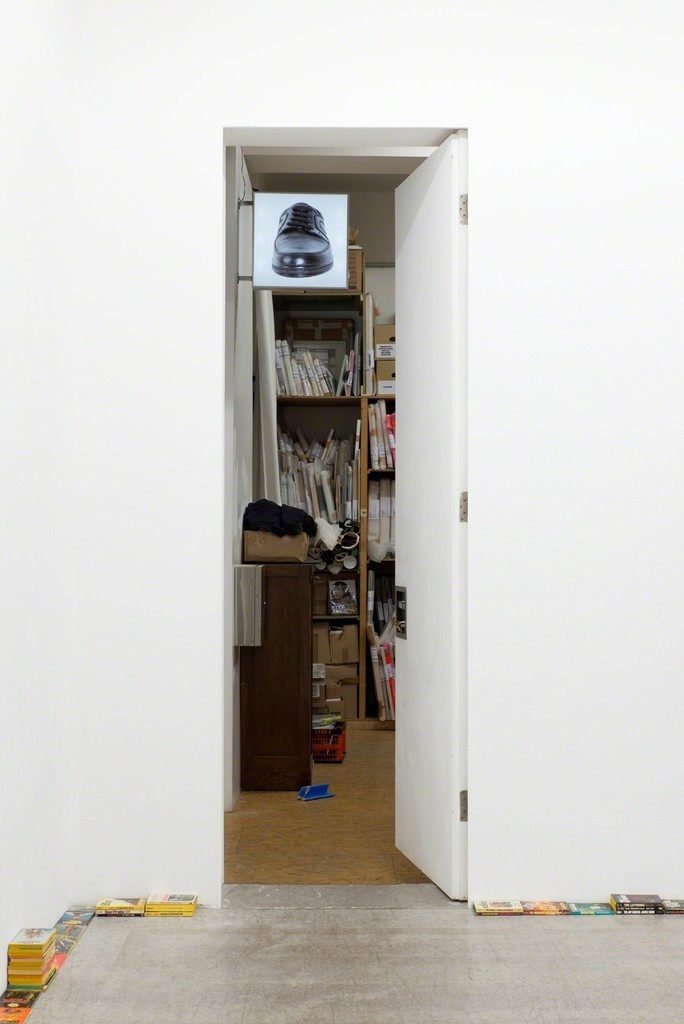 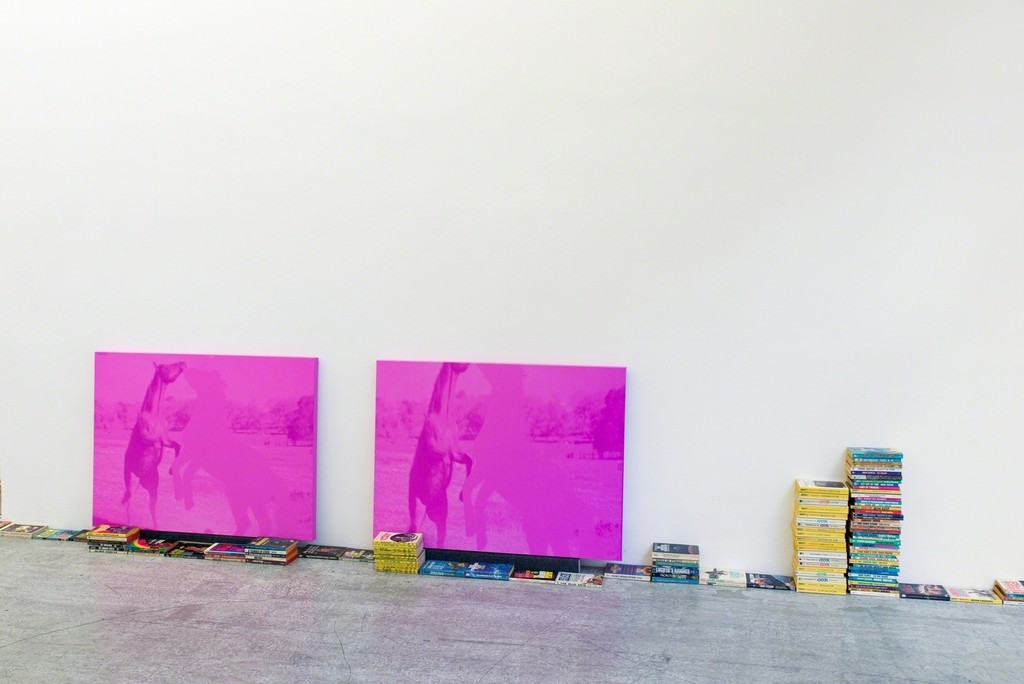 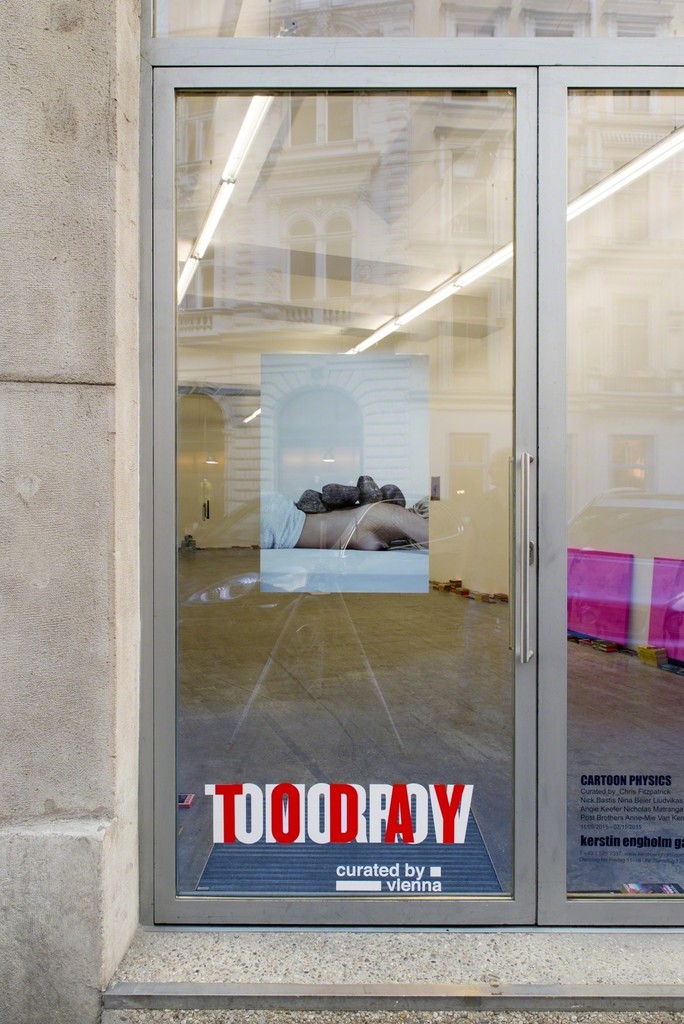 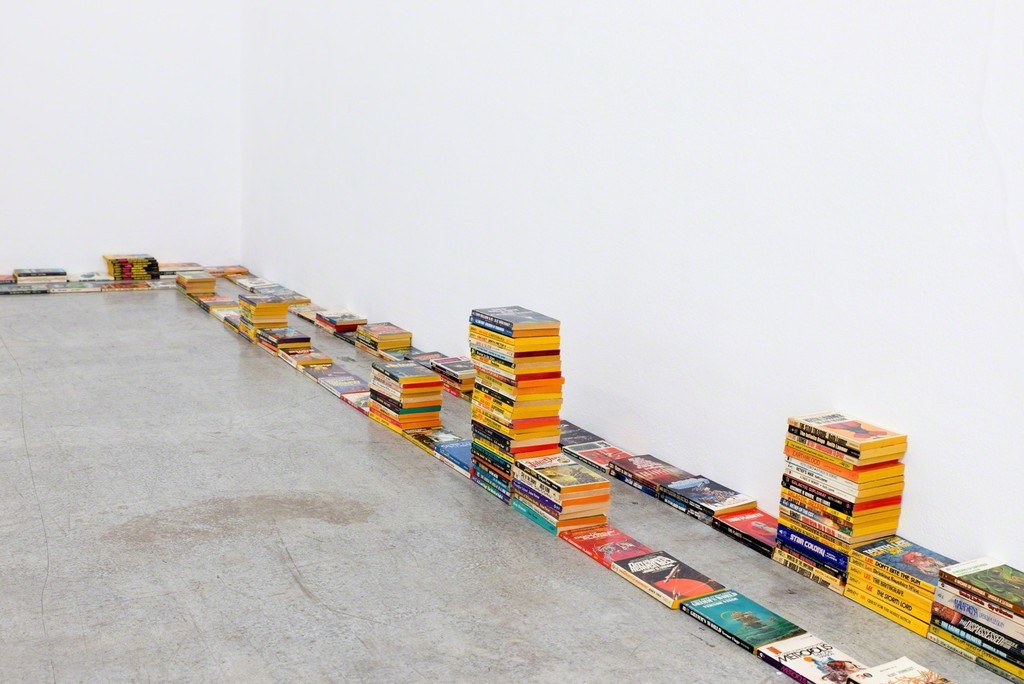 The laws of physics do not apply in cartoons. If we
stretch this lawless dimension off the screen, and attach its illogics to our realm, the limitless elasticity of cartoon physics offers a more fluid way of thinking about everything from the comical and sinister implications of artificial intelligence to the warped elliptical routes through which information is disseminated, from a waning anthropocentrism to the seemingly esoteric workings of speculative finance today (and whether or not today is even still a relevant temporal coordinate), and so on.
Contemporary art operates similarly. Opening 10 September 2015, Cartoon Physics is an exhibition of interdisciplinary work by Nick Bastis (US), Nina Beier (DK), Liudvikas Buklys (LT), Angie Keefer (US), Nicholas Matranga (US), Post Brothers (US), and Anne-Mie Van Kerckhoven (BE). It’s set within an alphabetized topography of nearly 2000 science fiction novels, which line the perimeter of the gallery, and which hosts a rather diverse population: 2 pairs of pink horses, mechanically printed (and misprinted) on 2 stretched canvases; a variable set of cryptic logos, silkscreened in copper on both sides of 400 gram business cards; 9 carpet samples, imbued with the psychology of sales in thick acrylic paint; a freestanding pane of teleprompter glass, offering a dual layer of opacity; 2 robotic vacuum cleaners, hacked with artificial intelligence to perform a choreography defined by the electronic noise in the air waves; snails sliming vinyl objects and storefront glass; serial posters parroting the grammar of empty metaphors that cannibalistically proliferate in stock imagery databanks; and all of this narrated by a talking head, projected in a cartoon world, where he correlates the workings of credit and financial speculation with the portable hole.

Chris Fitzpatrick (*1978) is since the beginning of 2015 the director of Kunstverein Munich. Previously he was director of the non profit art space Objectif Exhibitions in Antwerp, where he curated shows with Nina Beier, Bruce Conner, Mark Dion, Paul Elliman, Jos de Gruyter & Harald Thys and others. Independently from this, he curated shows like „Veerle“ at Fondazione Sandretto Re Rebaudengo, „The San Francisco Pavilion“ at the 9th Shanghai Biennale and „Sõida tasa üle silla“, as part of ART IST KUKU NU UT - festival in Tartu. International institutions, like CAC in Vilnius, Witte de With in Rotterdam and the Kadist Art Foundation in San Francisco, invited him to speak about contemporary art and his texts get published in international magazines like Spike Art Quarterly, Nero Magazine, Pazmaker, Mousse Magazine, Art Papers and Cura.