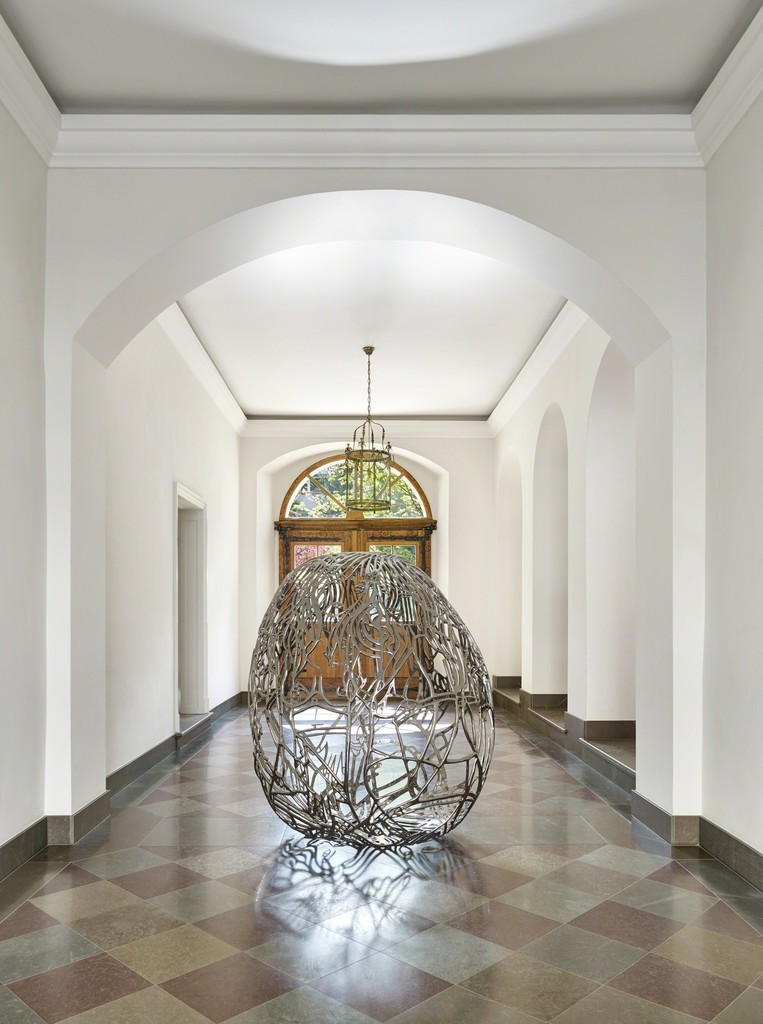 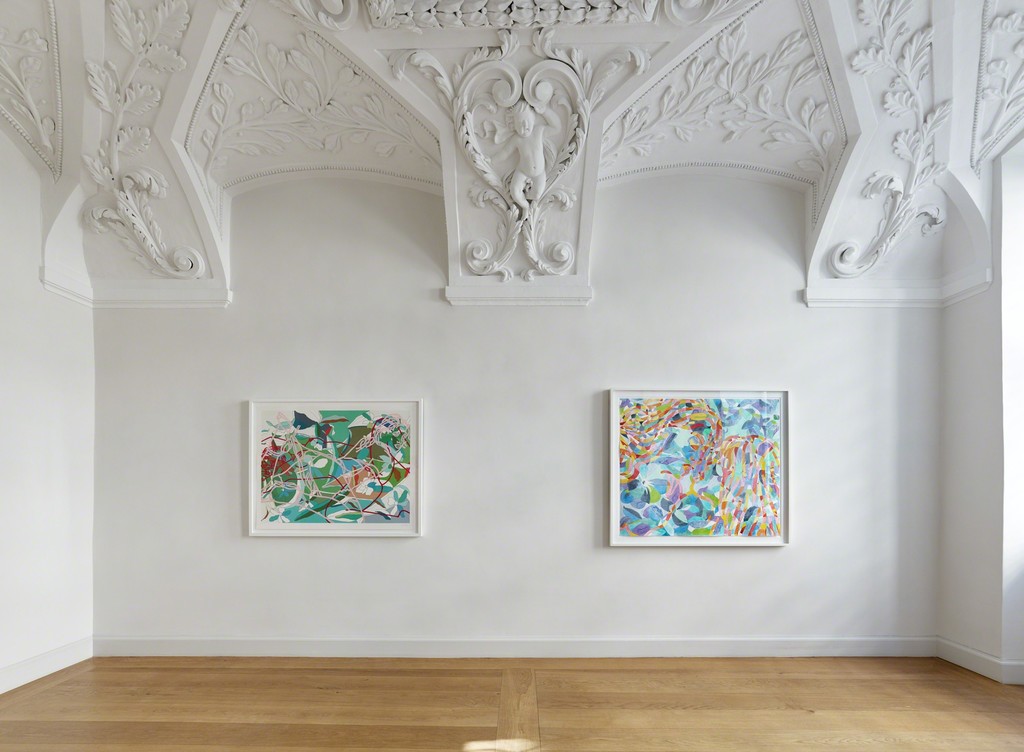 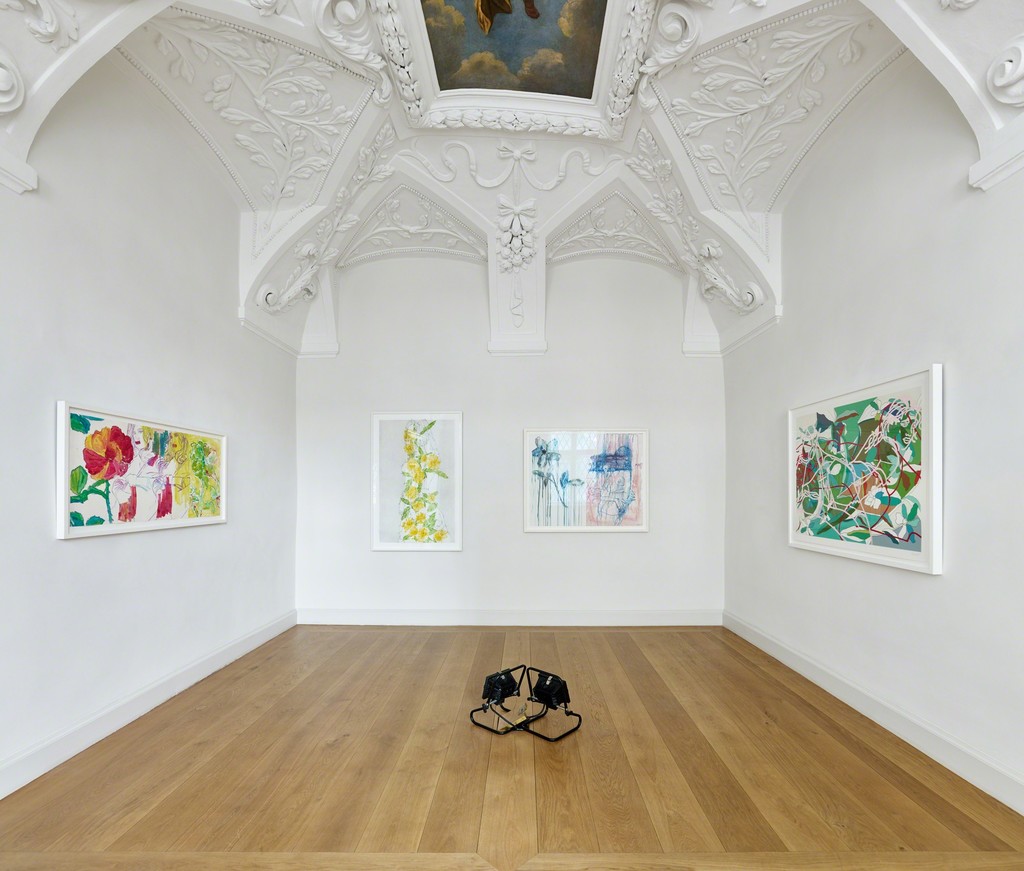 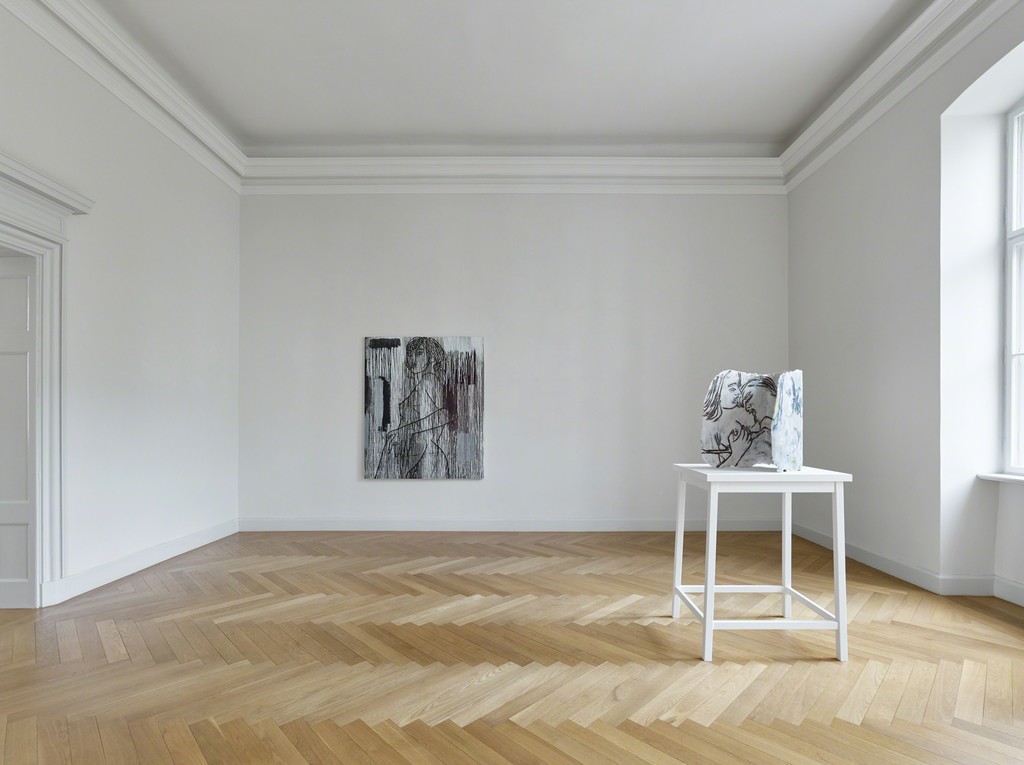 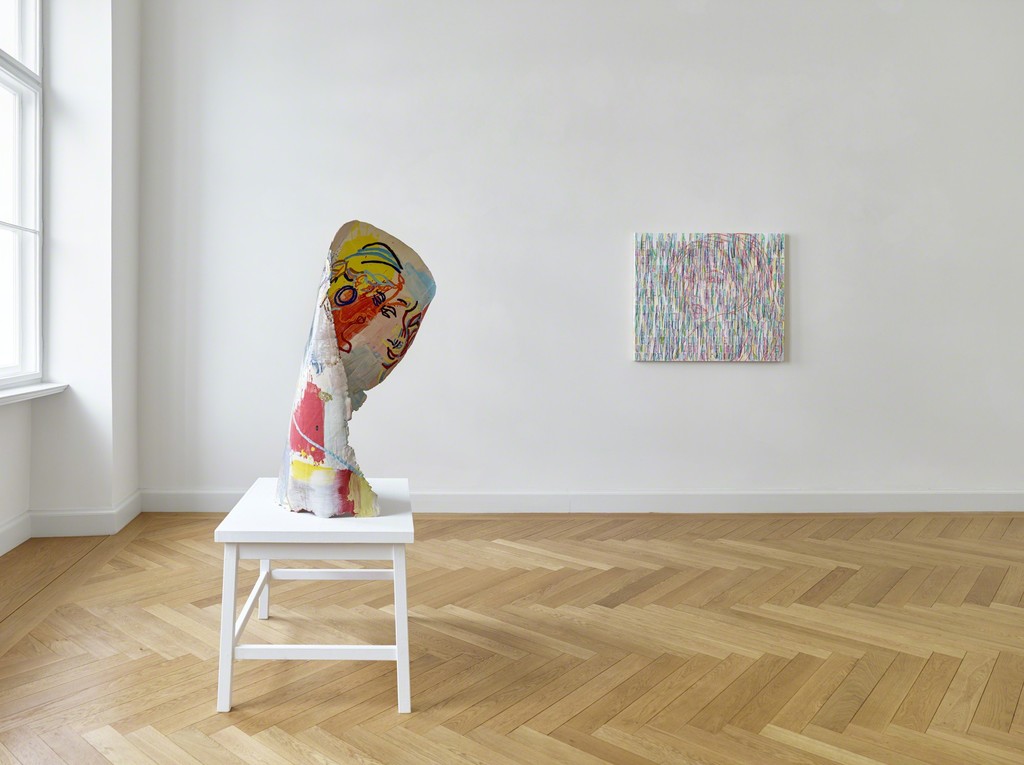 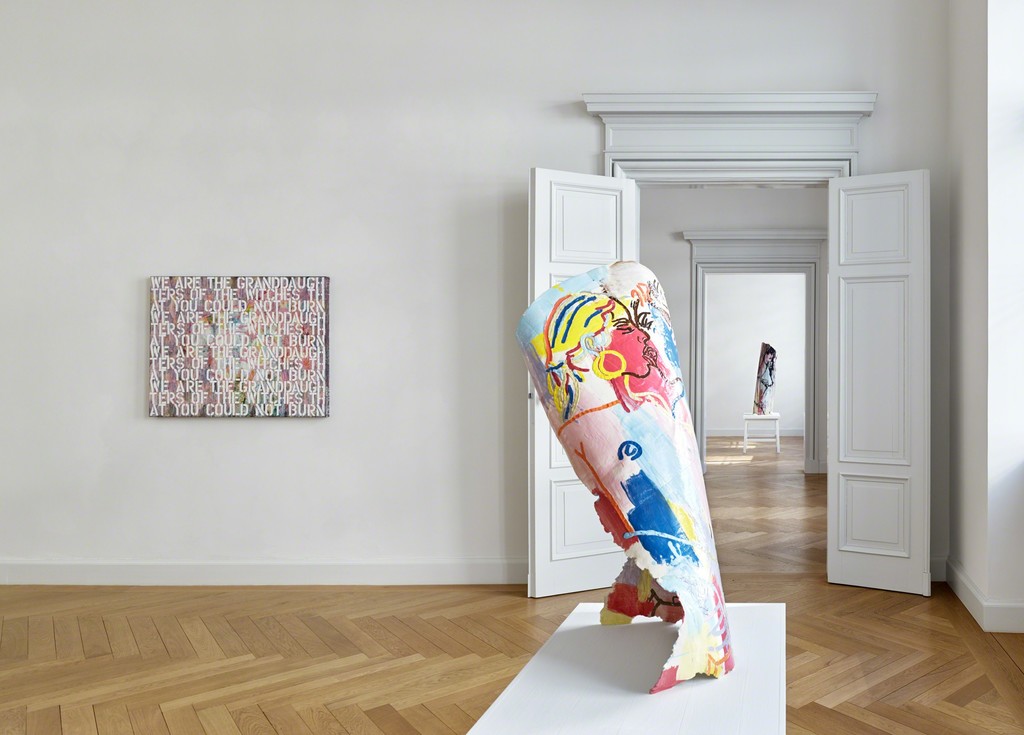 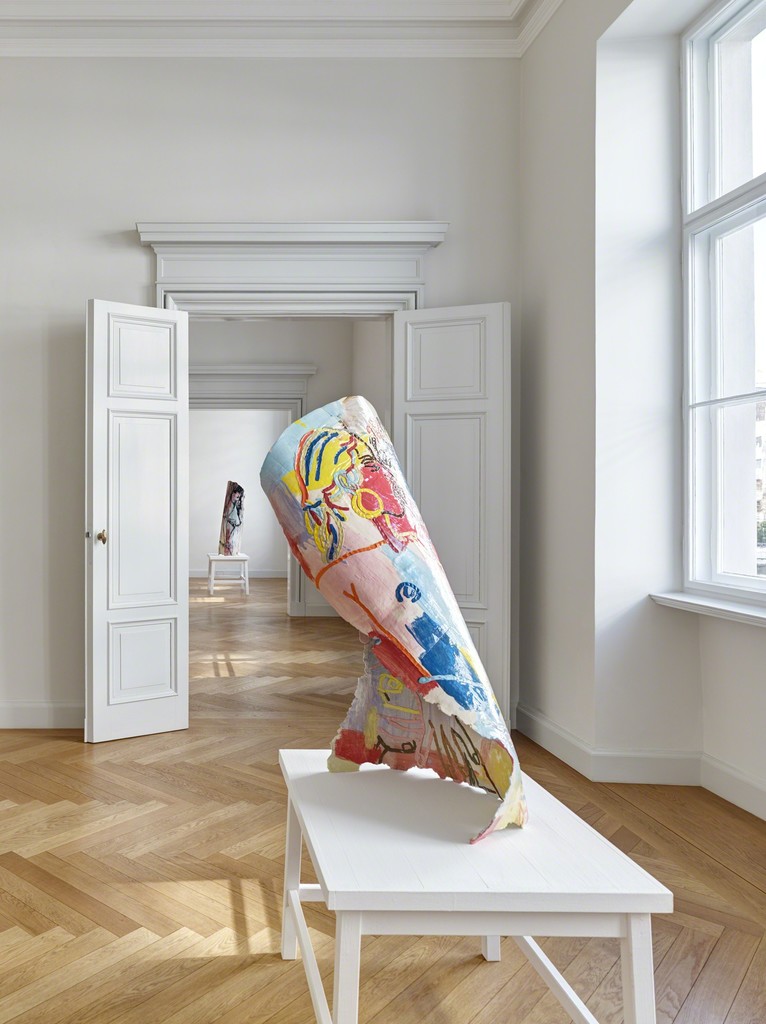 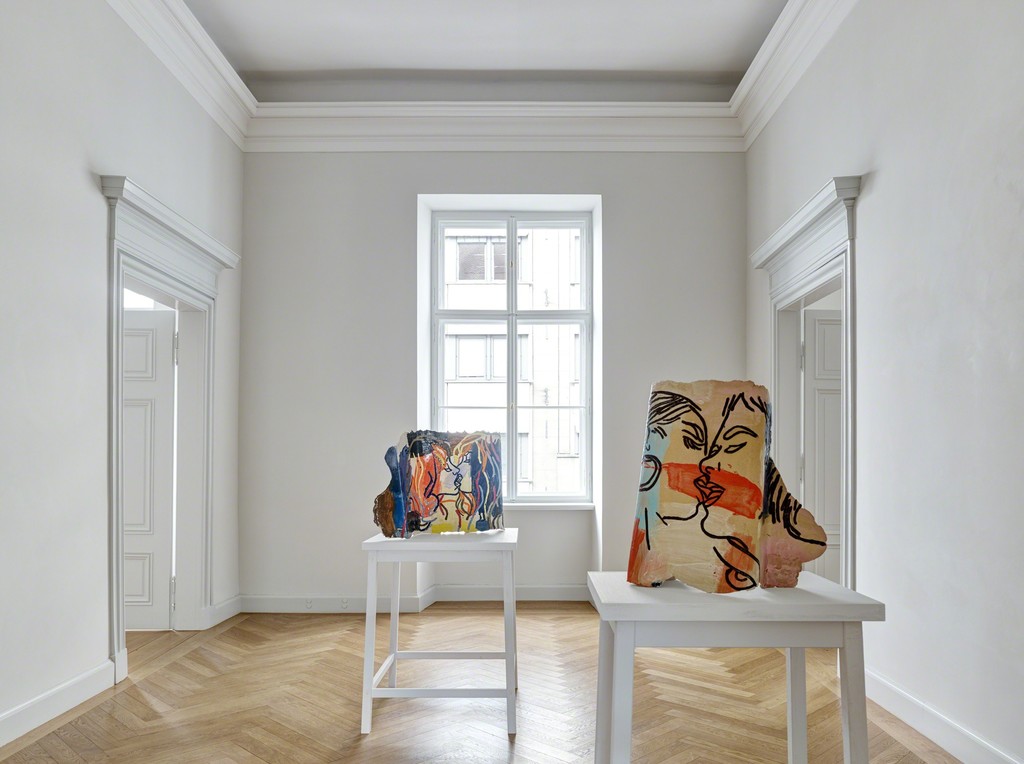 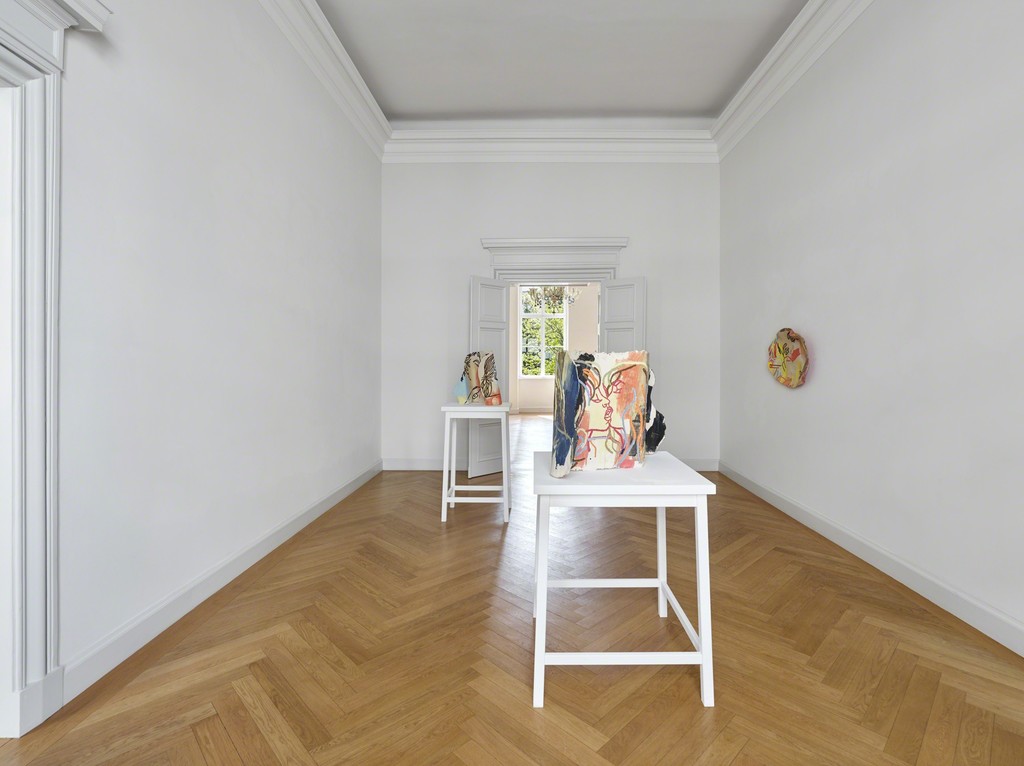 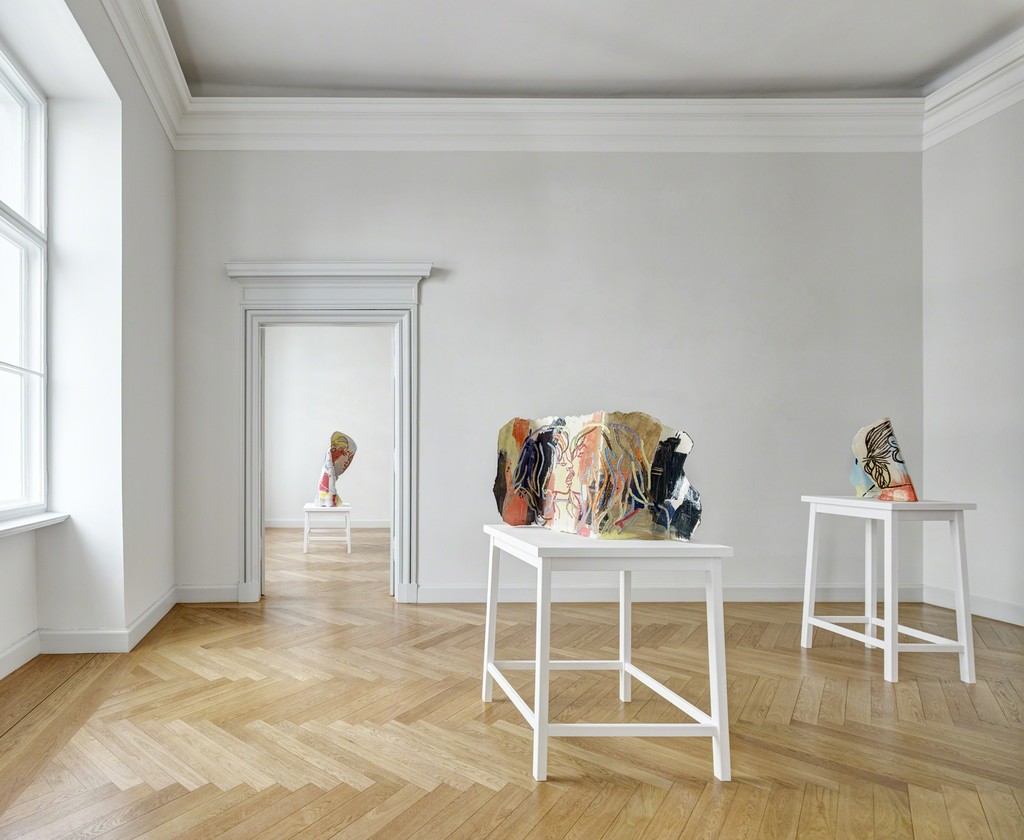 Kewenig is very pleased to open Ghada Amer’s first solo show in the Berlin Gallery and her first individual exhibition in Berlin in a long while. The artist became internationally known for her works that combine erotic motives and delicate embroidery. In them, she succeeds in her ironic commentary upon institutionalized role models, while self-confidently taking on painting as a medium. Amer combines painting and embroidery, because she considers the former a classically male medium, and the latter a kind of handiwork typically performed by women. “In my art history classes there were no references to female artists—just men, men, men. So I thought that would be a good way to talk about women and language,” says Amer, “and that’s why I wanted to paint and then sew on it [the canvas]—out of necessity, and not because I love crafts.”
She deals differently with clay. She is enthusiastic about the medium. Inspired by the models for her steel sculptures, she’s felt challenged by her confrontation of the material since 2014. Amer’s first works of art were large cuboids made of clay, although they weren’t realized for technical reasons. Disappointed, but undaunted, she turned to more natural shapes, and experimented with various additions, such as paper, in order to lend her abstract, colorful sculptures their rough contours, while at the same time stabilizing the material. During a two-year residency at Greenwich House Pottery, she created works that are unrivaled in the worlds of both art and ceramics. You can’t underestimate the difficulty of working with large, yet thin plates of clay, says Adam Welch, the director of Greenwich House, referring to Amer’s second, large group of works. Apart from the above-mentioned abstracts, Ghada Amer’s portraits of women are painted in liquid clay on both sides of the thin clay plates, which she bends until they stand upright.
With ceramics, canvases, a steel sculpture, and works on paper, the exhibition displays almost the spectrum of Amer’s oeuvre. The works on paper, made in collaboration with the Iranian artist Reza Farkhondeh, developed organically out of the close friendship between the two artists. They each add different elements to the drawings until they are both satisfied with the result. The egg-shaped, delicate steel sculpture “Blue Bra Girls” (2012) was named after the anonymous demonstrator who was brutally beaten in front of the world press during the Egyptian Revolution of 2011. In the media she was called “the girl with the blue bra,” since that was the only feature by which she could be identified. The girls seen ornamenting the sculpture are not victims. Rather, they pose self-confidently, giving their viewers a challenging look. Nudity never makes Ghada Amer’s figures seem vulnerable or shameful, because in all of Amer’s work, regardless of the medium, style and political demands assert themselves. Questioning power structures, gender stereotypes, and the depiction of female sexuality are some of the themes that form the basis of each of her works. With her images of self-confident, tantalizing women, Amer opposes institutionalized sexism. She finds her source materials in magazines. She’s also been using more motifs from erotic magazines, which she copies several times by hand in drawings, making them her own. Amer is interested in shifting and testing the boundaries between pornography and nudity. What makes something obscene or pornographic? How does the female gaze differ from the male observer’s? How does this influence the way in which both genders view the world? And how do they perceive art?
Ghada Amer was born in 1963 in Cairo, Egypt, but currently lives and works in New York. She and her parents moved to France in 1974, where, a decade later, she studied art at the Villa Arson in Nice. Amer’s works have been seen at exhibitions such as the Venice Biennial (1999), the Sydney Biennial (2006), the Whitney Biennial (2000), the Istanbul Biennial (1996), and the Gwangju Biennial (2000). She’s had solo shows at the Tel Aviv Museum of Art in Tel Aviv and at Kunstwerke Berlin (both 2000), the Museum Kunstpalast in Düsseldorf (2001), the De Appel Foundation in Amsterdam (2002), the Museo d’Arte Contemporanea Roma in Rome (2007), and the Whitney Museum of American Art in New York (2010, along with Reza Farkhondeh). Her art can be found in the following public collections: Art Institute of Chicago, Chicago; Centre Georges Pompidou, Paris; Detroit Institute of Art, Detroit; Fond National d’Art Contemporain (FNAC), Paris, France, and in Auvergne and Provence-Alpes-Côte d’Azur, France; Guggenheim Museum, Abu Dhabi; Israel Museum, Jerusalem; LaM Museum, Sammlung Goetz, Munich; and the Samsung Museum, Seoul.