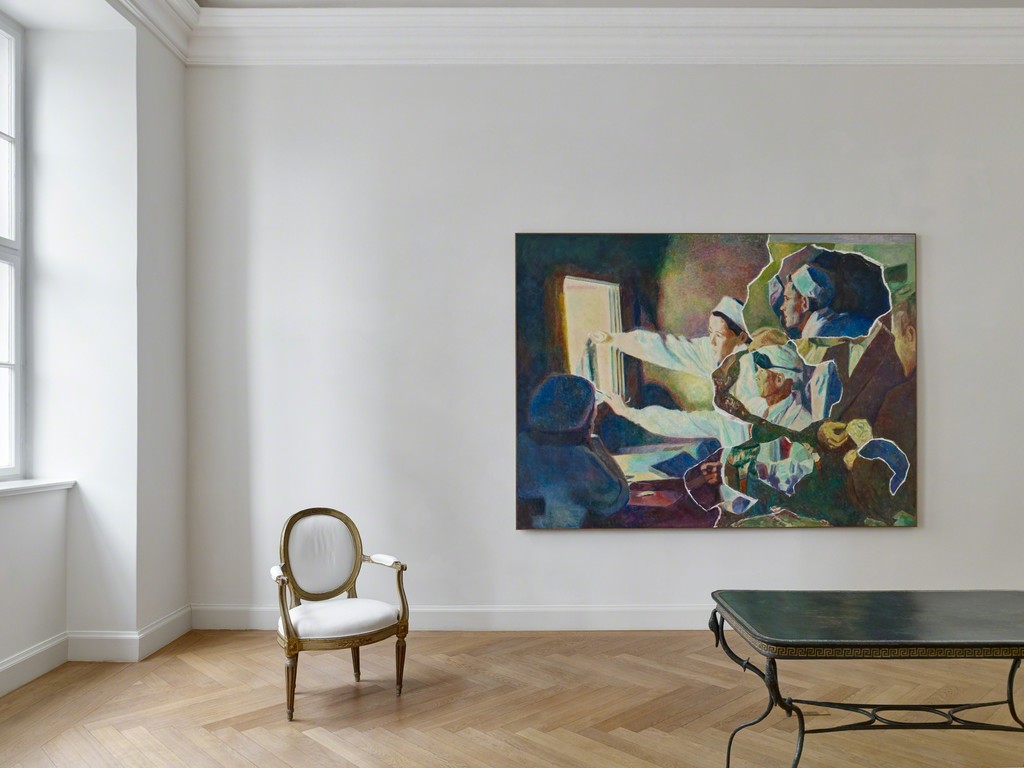 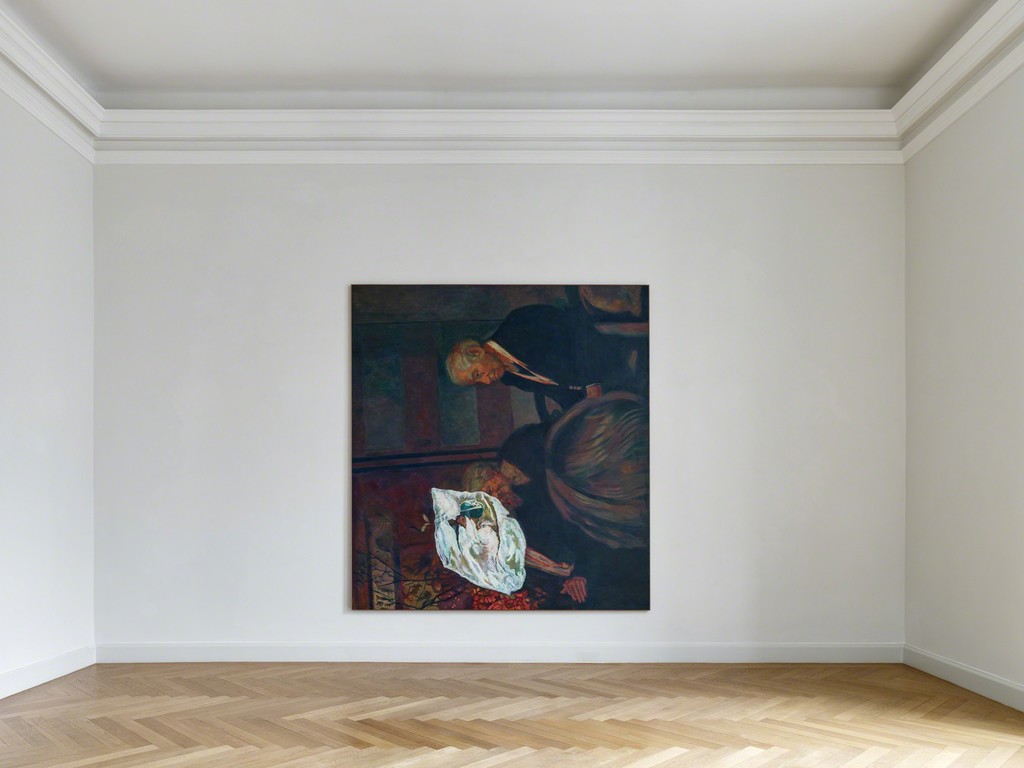 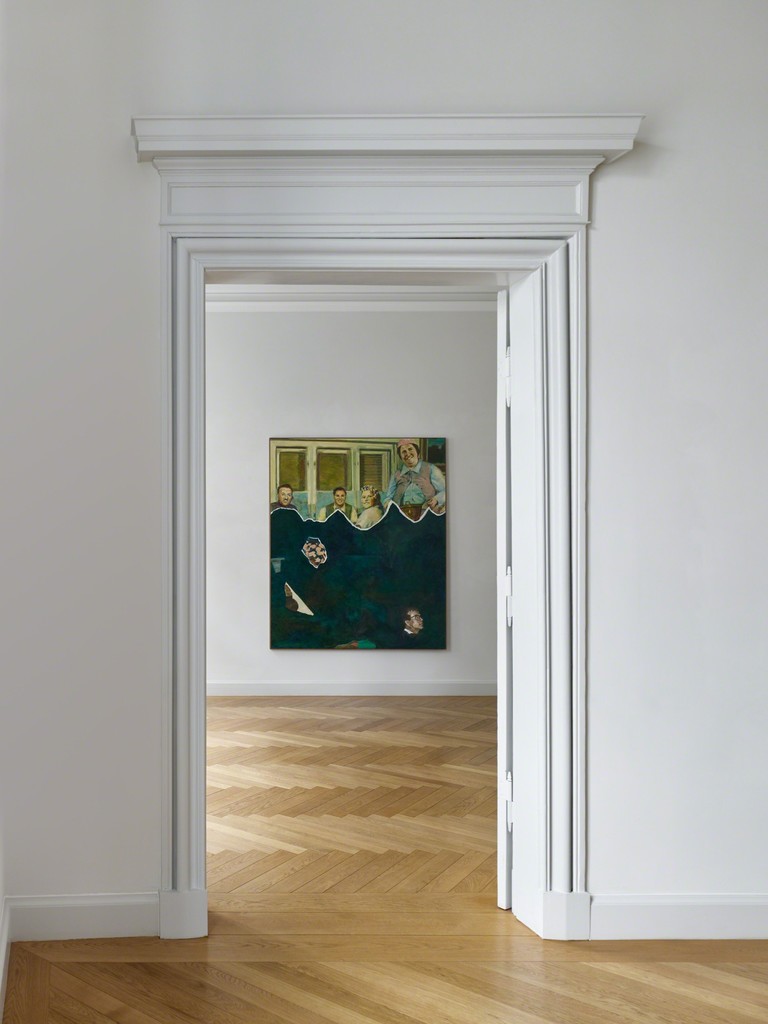 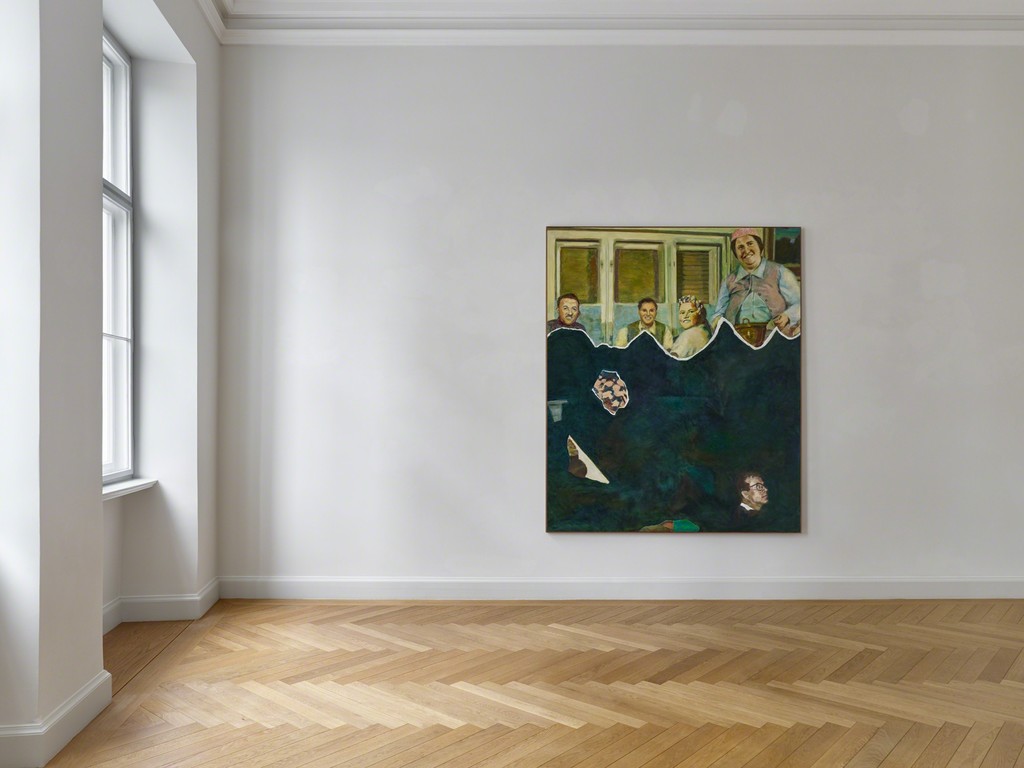 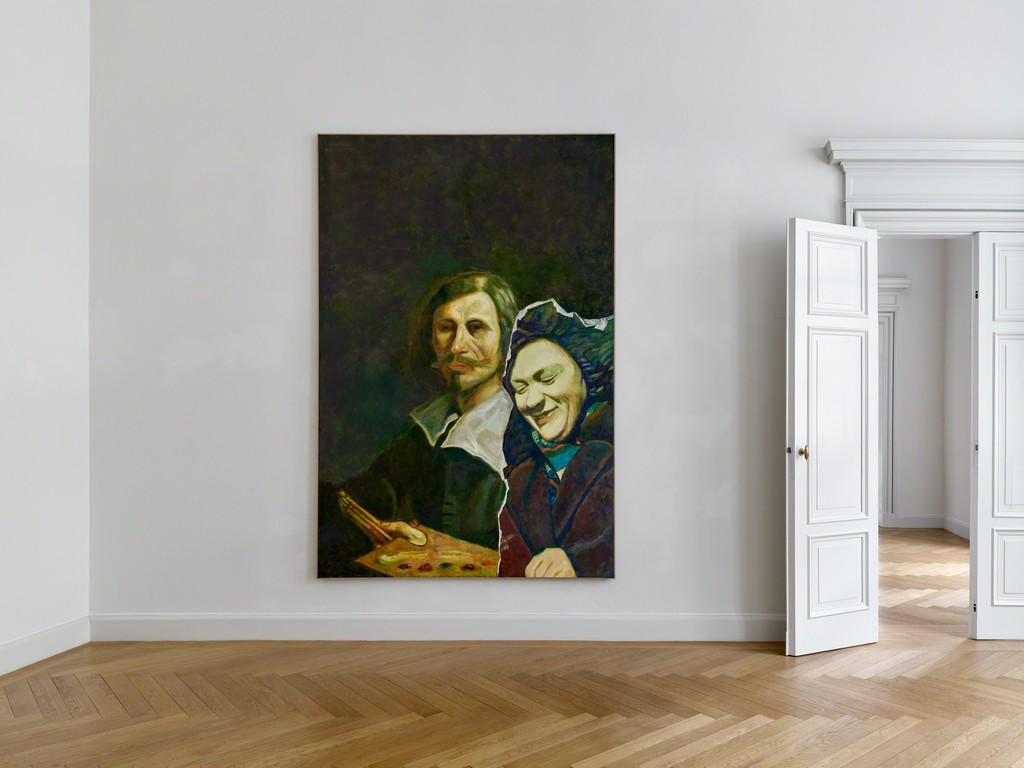 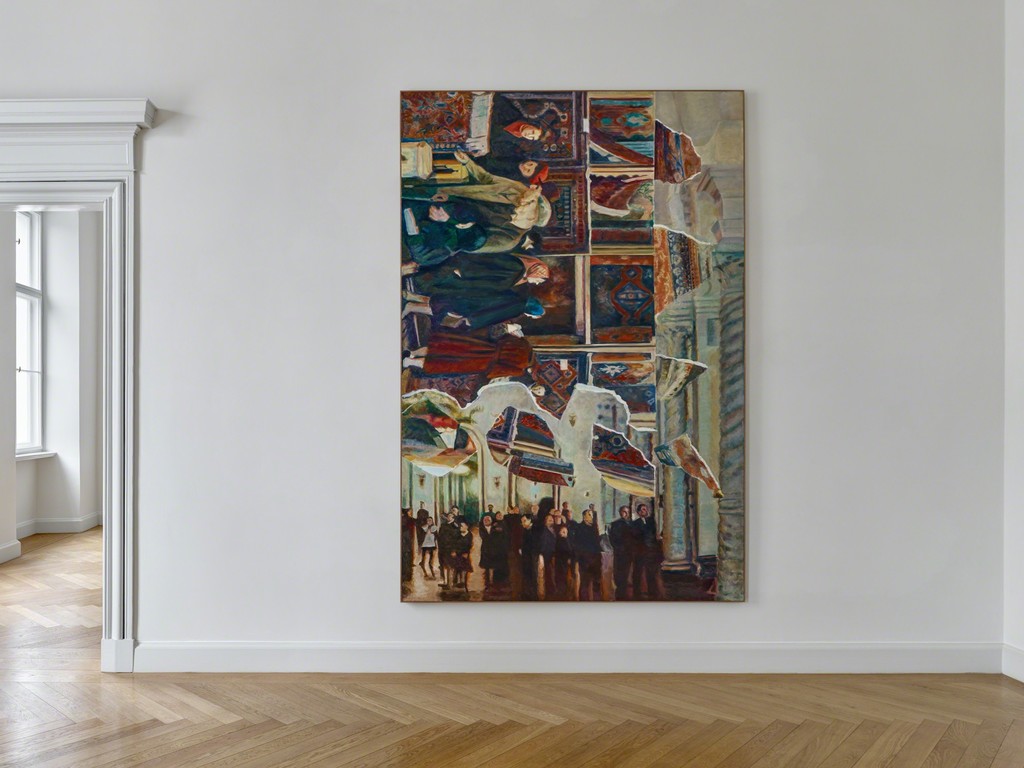 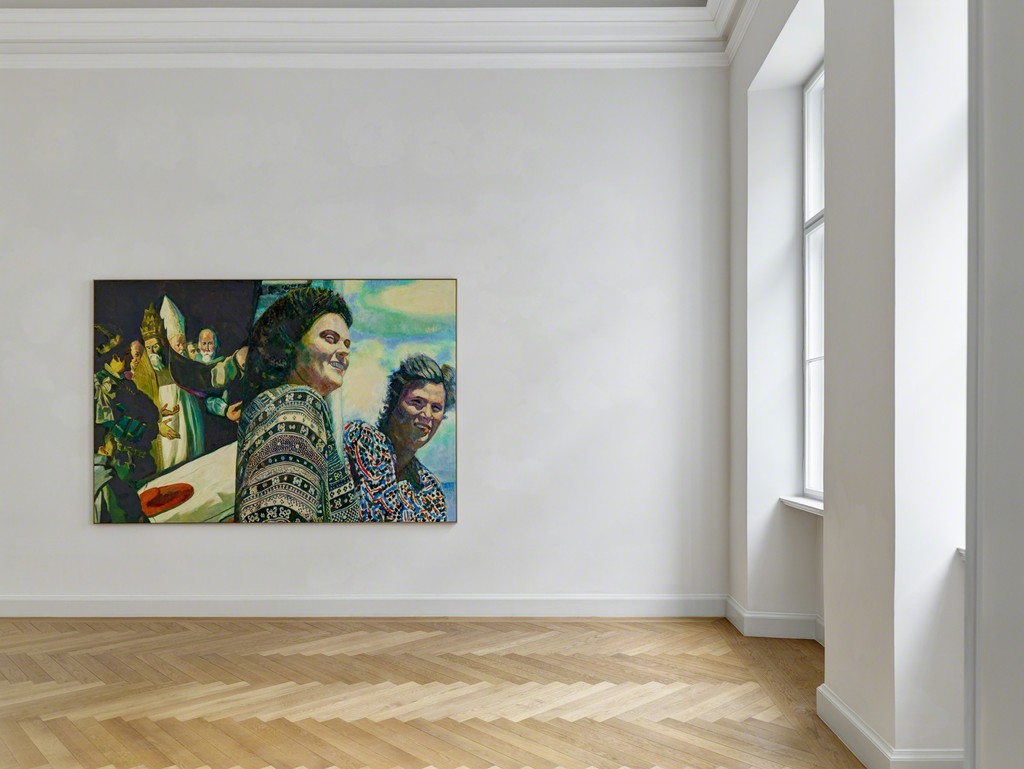 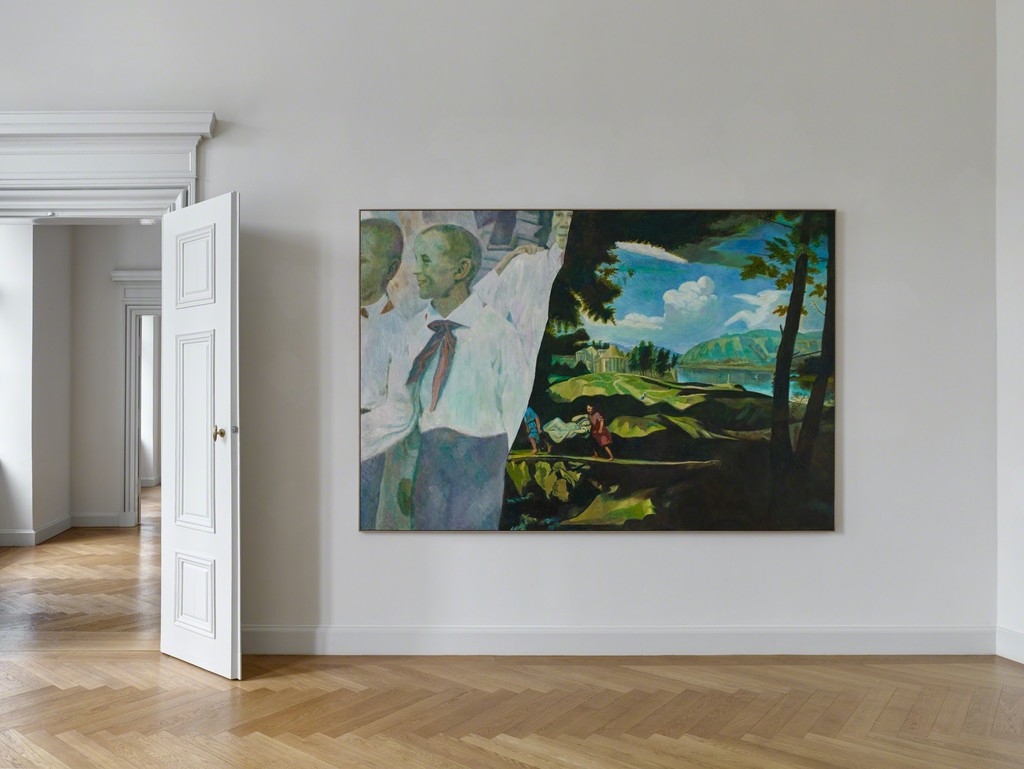 Kewenig is pleased to show paintings by Ilya and Emilia Kabakov from the years 2012 to 2015. The exhibition gathers together works from four major series by this pair of artists: The Appearance of the Collage (2012), Vertical Paintings (2012), Dark and Light (2012), and Two Times (2014-15), which reflect upon the perception of reality and the illusion of time and space through painting.
Even after emigrating from the Soviet Union to New York City, where Ilya and Emilia Kabakov have lived since 1988, their memories of their homeland’s socialist environment remain a persistent reference point in their paintings, sculptures, and installations.
Ilya Kabakov has always employed theory to reflect upon his work. He’s recently categorized the art he’s produced since 1970 under the title The Great Arc, dividing it into five acts of different significance and aesthetics. Whereas the white paintings initially contained small excerpts from the real world, the second-act paintings incorporate larger portions of reality. In the third act, reality ultimately blankets the entire picture surface, while in the fourth act a darkness opens up behind the reality of the paintings, which ultimately takes over the entire painting in the final, fifth act.
This show begins with the third act of the Kabakovian arc. It begins with The Appearance of the Collage #12 (2012), a painting that incorporates fragments of two different visual narratives—introducing what look like torn-edged magazine clippings of people into the different reality of another painting. Countering the demand for an unambiguous reading, Kabakov presents a fragmented approach to a world, portions of which can only be visually perceived by viewers, who can link them to the patchwork that they’re actually seeing when they believe they’re “getting the whole picture.”
Located in the first room on the upper exhibition floor, Dark and Light #10 (2013) is a self-portrait of both artists, who are surrounded by nuanced darkness and flipped onto a horizontal plane. The strong contrast between dark and light is especially effective in the section where a white surface overlaps Emilia Kabakov’s head. In Vertical Painting #5 (2012), too, the pictorial space conquers the vertical plane. For Ilya Kabakov, the lower half of the picture corresponds to what the viewer finds “correct,” while the upper half is turned ninety degrees. The pictorial events vanish upward, and sections of the painting are lost in the rapid movement, like torn-out clippings sinking toward the bottom.
In the Kabakovs’ latest series Two Times (2014-15), the artists allow two epochs of cultural history to collide sharply. One side features subjects of classic art history, while the other is of a personal memory of Kabakov’s Soviet homeland. In contrast to the supposed stability of the world, the fragmented character of reality and art is in the foreground. Ultimately, the paintings from the Two Times series are also reflections upon memory, life, death, and, above all, upon the artist’s doubts and fears about the place of his work in the history of art.
Ilya Kabakov (b. 1933 in Dnepropetrovsk, USSR) studied fine arts and illustration at the VA Surikov Art Academy in Moscow, and began his career as a children's book illustrator during the 1950's. As one of the major figures of Moscow Conceptualism, he worked outside of the official Soviet art system. He and his wife, Emilia Kabakov (b. 1945 in Dnepropetrovsk, USSR) have lived in the United States since 1988 on Long Island, New York. Emilia Kabakov studied music at the Moscow Music School and at the Irkutsk Music Academy, Dnepropetrovsk; she also studied literature and Spanish at the University of Moscow, before going to New York in 1975 to work as a curator and art dealer. In 1989 Ilya Kabakov received a grant from the DAAD, and that same year his works were shown at the Centre Pompidou in Paris. While he taught at the Städelschule in Frankfurt am Main from 1992 to 1993, his works were presented at the Documenta IX in Kassel (1992) and at the 45th Venice Biennial (1993), where he represented Russia in the Red Pavilion. Among the many distinctions the Kabakovs have received are the Kunstpreis Aachen (1990), the Max Beckmann Prize (1993), the Joseph Beuys Prize (1993), an honorary diploma at the Venice Biennial (1993), the Goslar Kaiserring (1998); the French Chevaliers des Arts et des Lettres (1995); the Oskar Kokoschka Prize (2002); the Russian Order of Friendship, Moscow (2008); the Praemium Imperiale, Tokyo (2008), and the French Commandeur de L'Ordre des Arts et des Lettres (2014).
A comprehensive retrospective honoring the Kabakovs’ work will open at the Tate Modern in London in October 2017. Since 2000 their works have also been seen in more than one hundred exhibitions, including shows at the Power Station of Art in Shanghai (2015); as part of the Monumenta at the Grand Palais in Paris (2014); at the Multimedia Art Museum, Moscow (2013); the Sprengel Museum Hannover; the Hermitage in St. Petersburg (2005, 2005, 2010); the Maxxi - Museo Nazionale delle Arti del XXI Secolo, Rome (2004); the Chinati Foundation, Marfa (2002); the Contemporary Art Center, Art Tower Mito, Japan (1999); the Museo Nacional Centro de Arte Reina Sofía, Madrid (1998); the Centre Pompidou, Paris (1989, 1995); the Stedelijk Museum, Amsterdam (1993), and at the Hirshhorn Museum und Sculpture Garden, Washington, D. C. (1990).
The Kabakovs’ works can be found in renowned collections around the globe, including the Centre Pompidou, Paris; the MoMA, New York; the Sprengel Museum, Hanover; the Hermitage in St. Petersburg; the Stedelijk Museum, Amsterdam; the Tate Modern, London; the State Tretyakov Gallery, Moscow, and at the Van Abbemuseum, Eindhoven, Netherlands, to name just a few.