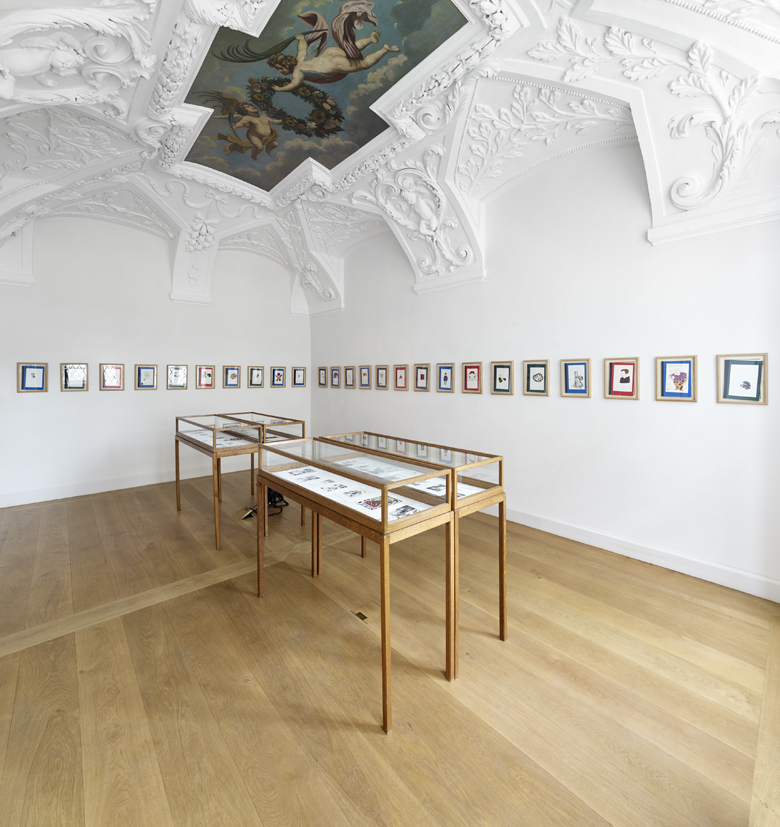 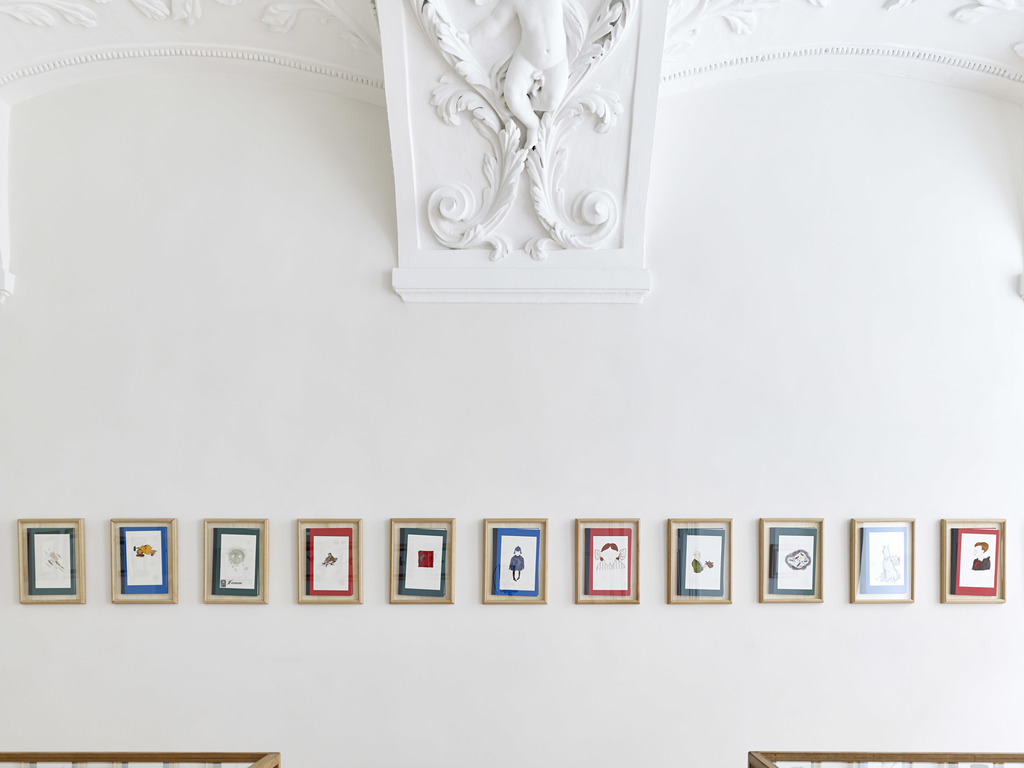 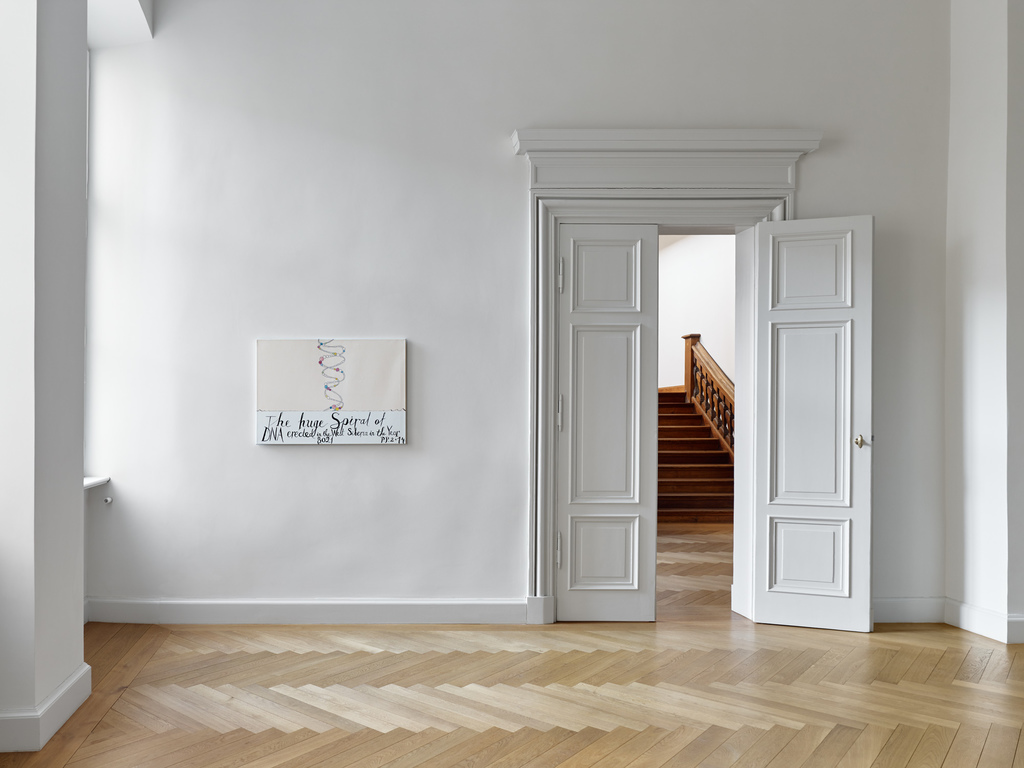 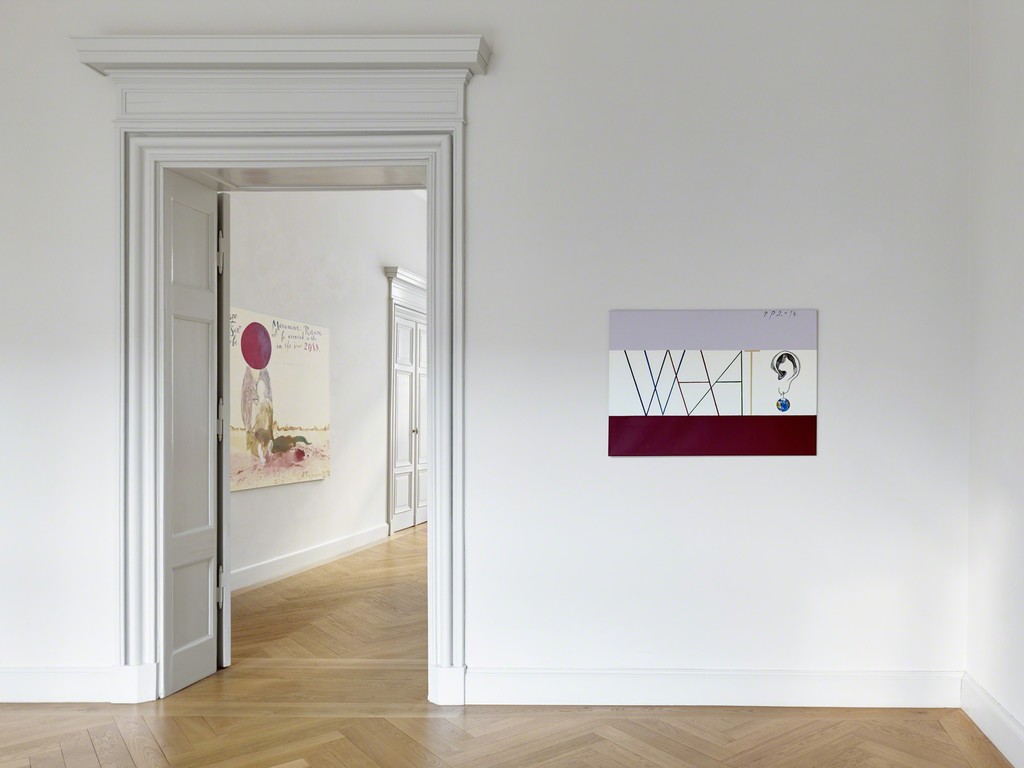 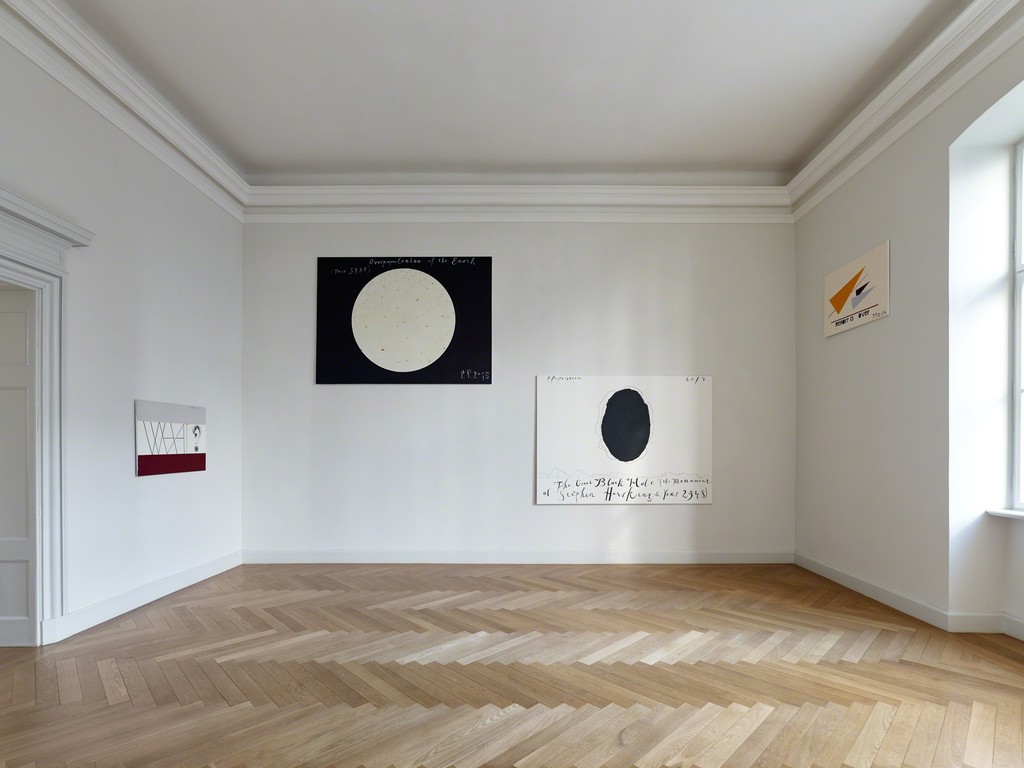 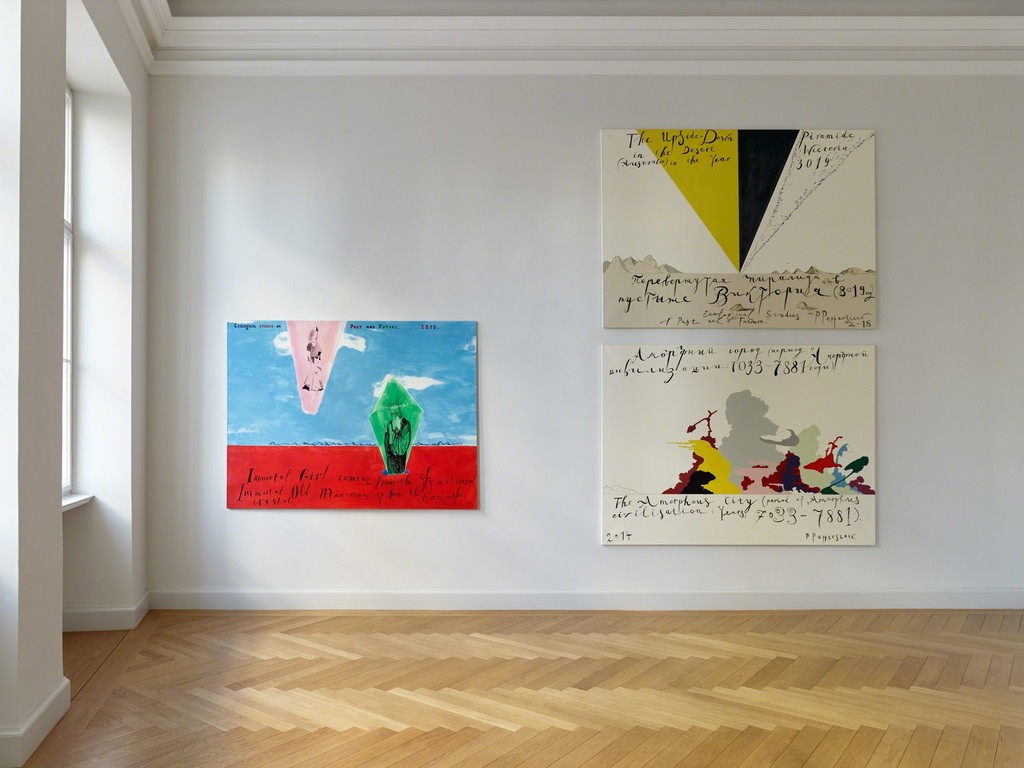 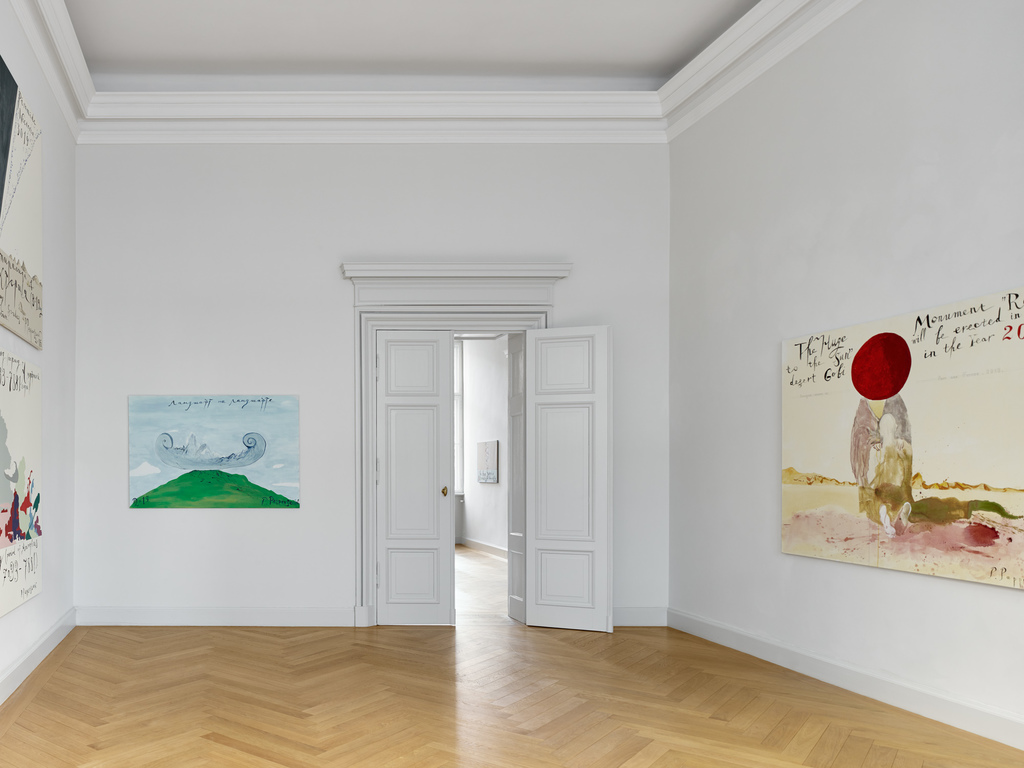 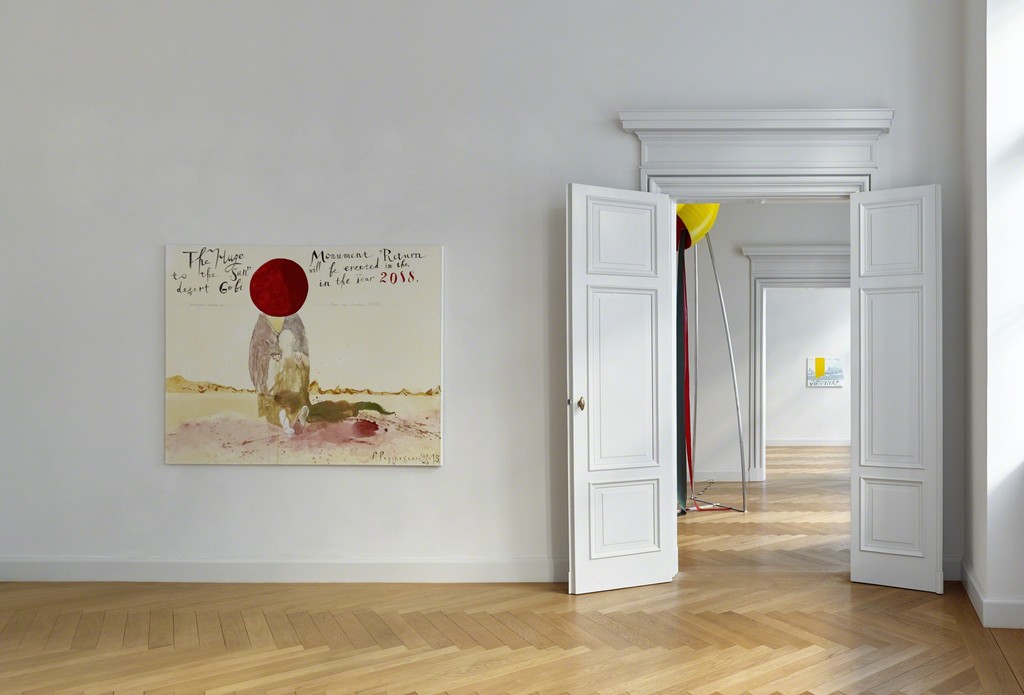 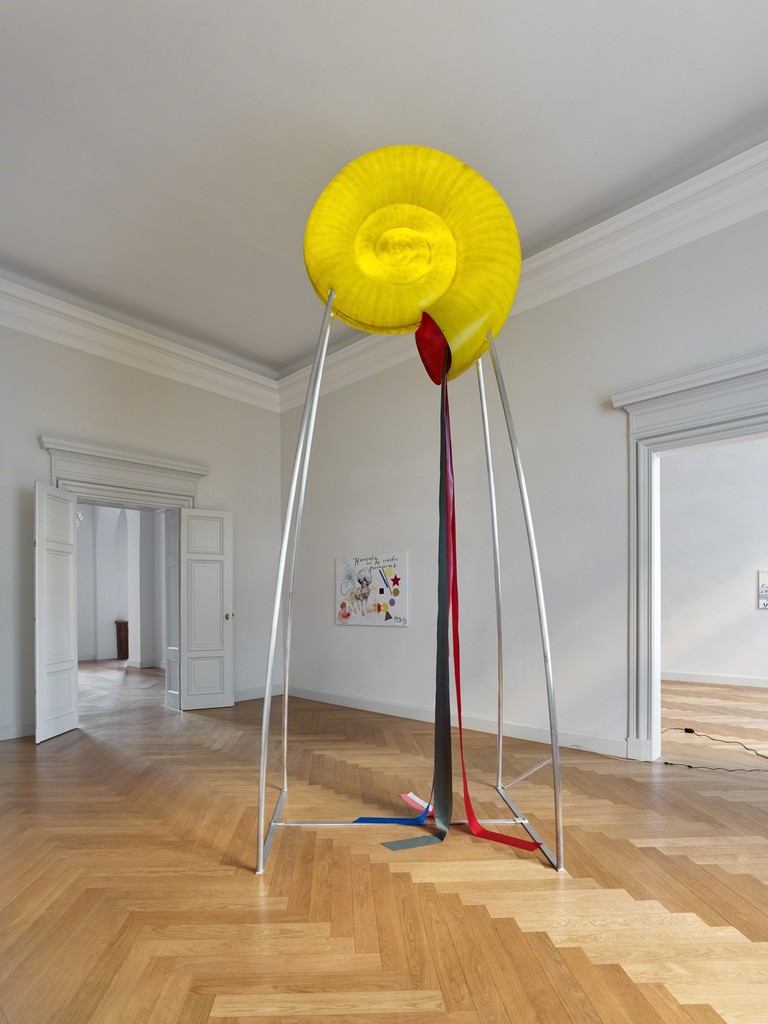 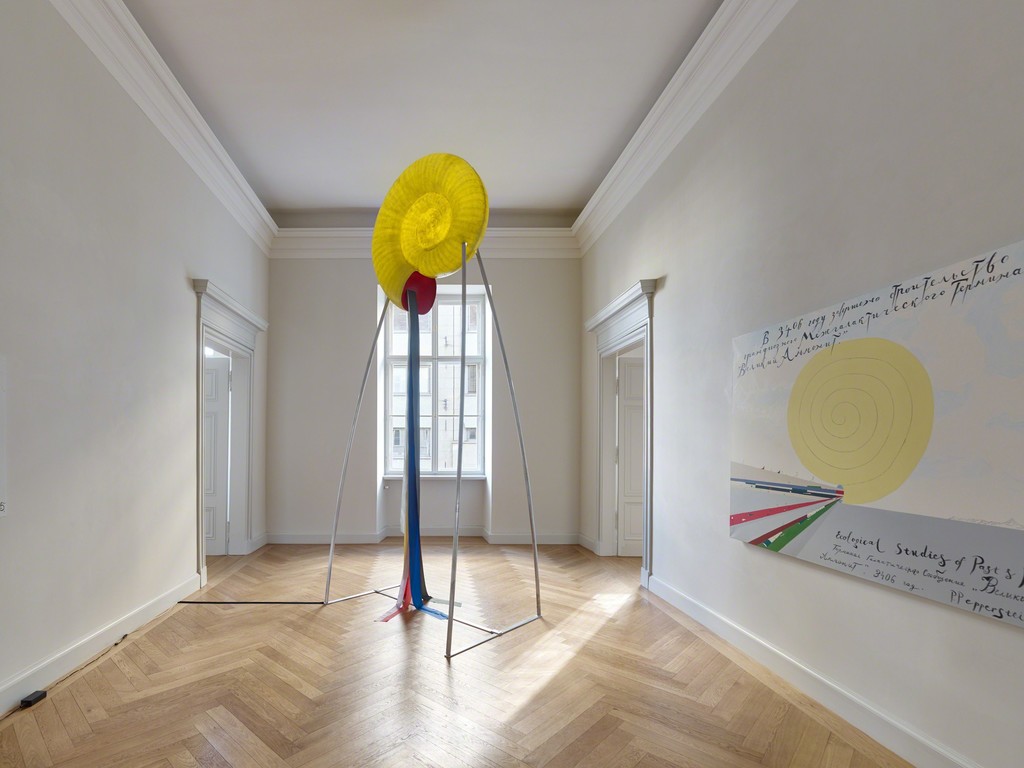 Kewenig is delighted to announce the opening of the solo exhibition “Abstract Memories” featuring works by Pavel Pepperstein (born in Moscow in 1966) in its Berlin gallery. In an interplay of text and image, the sensitive poet and virtuoso draughtsman Pepperstein creates imaginary utopias and surreal narratives. The exhibition will concentrate on works on canvas and paper of the years 2014 and 2015, supplemented by one sculpture. A number of these works were shown last year in the artist’s solo exhibition “The Cold Center of the Sun” at the Musée d’Art Moderne et Contemporain in Saint-Étienne and the Multimedia Art Museum in Moscow. After the Berlin venue, the works will be presented at the PLATO – platform for contemporary art in Ostrava in the Czech Republic.
Pavel Pepperstein, whose pseudonym was inspired by a character in Thomas Mann’s Magic Mountain, is the son of the artist Viktor Pivovarov and as such closely acquainted with the exponents of Moscow Conceptualism. Ilya Kabakov, Erik Bulatov and Dmitri Prigov were among his father’s friends and artistic companions. As a co-founder of the group “Inspection Medical Hermeneutics”, Pepperstein is considered one of the prominent figures of the generation of Russian artists who grew up in the Soviet Union and witnessed the system’s collapse. His interest in political and social constructions may have been inspired by that experience. The canvasses and drawings on view in the show depict scenes from Peppersteins collection of short stories titled “The Secret of our Times.” In his tale War Stories, Pepperstein recounts the history of the war between the elements of painterly abstraction (the black square, the red triangle and the yellow circle as basic geometric forms in elementary colours). Inspired by El Lissitzky’s lithograph Beat the whites with the red wedge (1919), the forms of the suprematist avant-garde become protagonists of intergalactic worlds – for example the yellow circle in the work The construction of the grand Intergalactic Terminal ‘Great Ammonite’ was completed in the year 3406 (2014). With his narrative drawing style, Pepperstein combines elements of the Russian fairy tale, the Russian novel and Russian art with pictorial motifs of Zen Buddhism and the comic book in his independent “calligraphy”.
With his œuvre, Pavel Pepperstein works in the void left behind in Russia after the fall of the Soviet Union: “It was not Soviet power that suffered a defeat in the putsch. ... It was the utopia of making
Brüderstr. 10 D-10178 Berlin T. 0049.30.3988 0380 [email protected] www.kewenig.com
KEWENIG
ideology aesthetic and ‘artistic’ that had been embodied in a unique way in the material signs it had itself created, in monumental architectonic complexes, in the whole geopolitical space of the USSR.”1 Pepperstein fills this void with his imagination and takes the aestheticization of utopia into his own hands. His work ironizes the contradictions and complexity of historiographies and reveals theories and utopias for what they always initially are: products of fanciful, far-reaching, and non- conformist thought.
The exhibition “The Cold Center of the Sun” was accompanied by a catalogue published by Hatje Cantz which not only features Pepperstein’s most recent works but also excerpts from his short story collection entitled The Secret of Our Time.
Pavel Pepperstein lives and works in Moscow and Prague. He studied at the Prague Academy of Fine Arts from 1985 to 1987. In 1994 he taught at the Städelschule in Frankfurt a.M. as a guest professor, and from 1997 to 1998 he attended the Akademie Schloss Solitude in Stuttgart within the framework of a grant. In 2014 he was distinguished with the prestigious Moscow Kandinsky Prize in the category “Project of the Year” for his project Holy Politics. The same year he participated in the Manifesta 10 at the State Hermitage Museum in St Petersburg. At the 53rd Biennale di Venezia in 2009, the Russian Pavilion featured his installation Landscapes of the Future. In the past his work has been presented in institutional solo exhibitions at the Kunstmuseum Liechtenstein, Vaduz (2010), the Museum für Gegenwartskunst in Basel (2006), the Russian State Museum in St Petersburg (1997), the Kunsthalle Düsseldorf (1990). Pavel Pepperstein has participated in group exhibitions worldwide. Examples of the international collections that have purchased his works are the Centre Georges Pompidou in Paris (the Florence & Daniel Guerlain Collection), the Moscow Museum of Contemporary Art, the Tretyakov State Gallery in Moscow, the Kunsthalle Düsseldorf, the Sammlung Deutsche Bank, the Swiss Kunsthaus Zug, the De Pury Collection and the Teylers Museum in Haarlem.