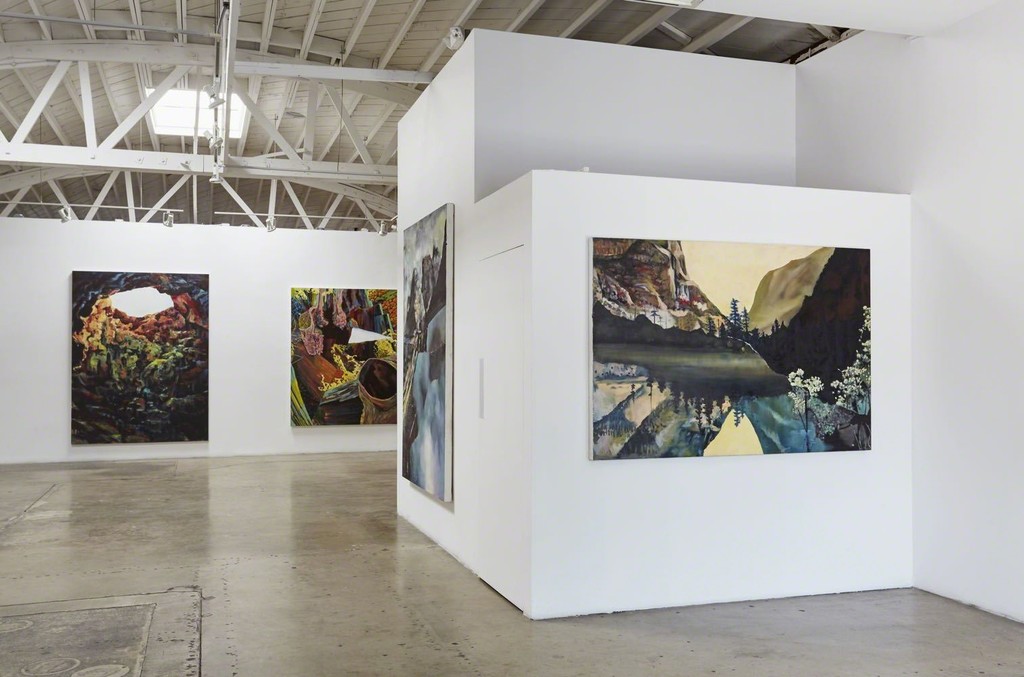 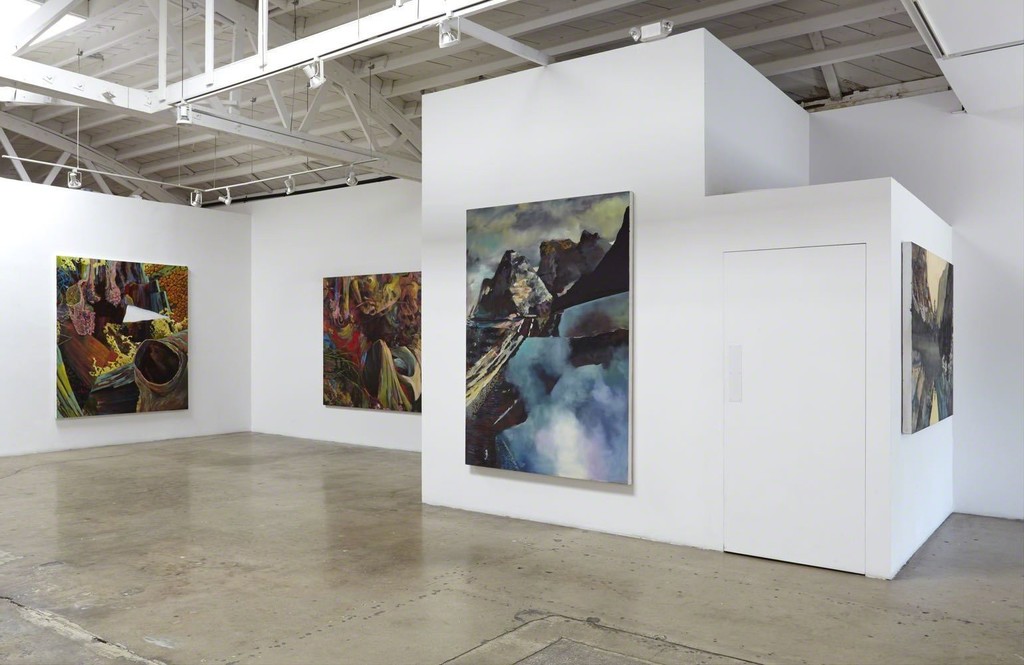 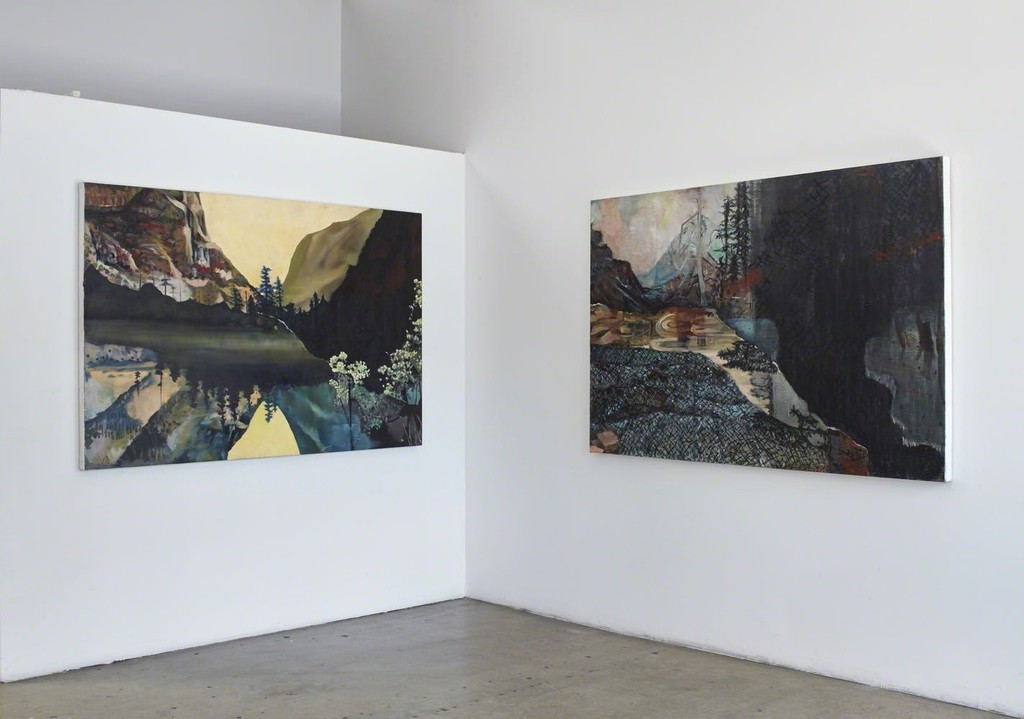 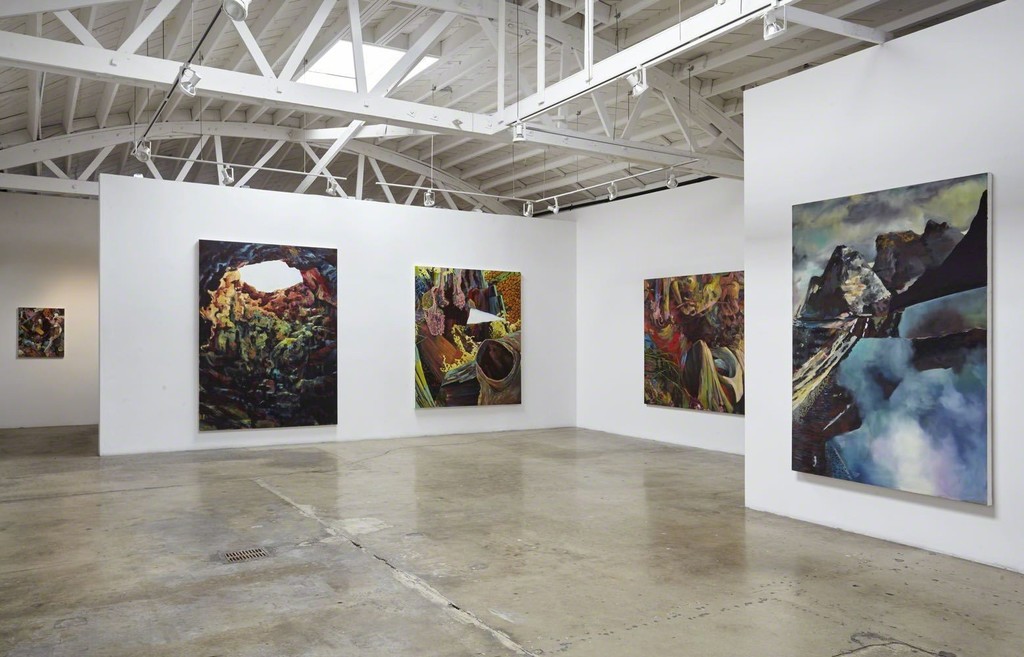 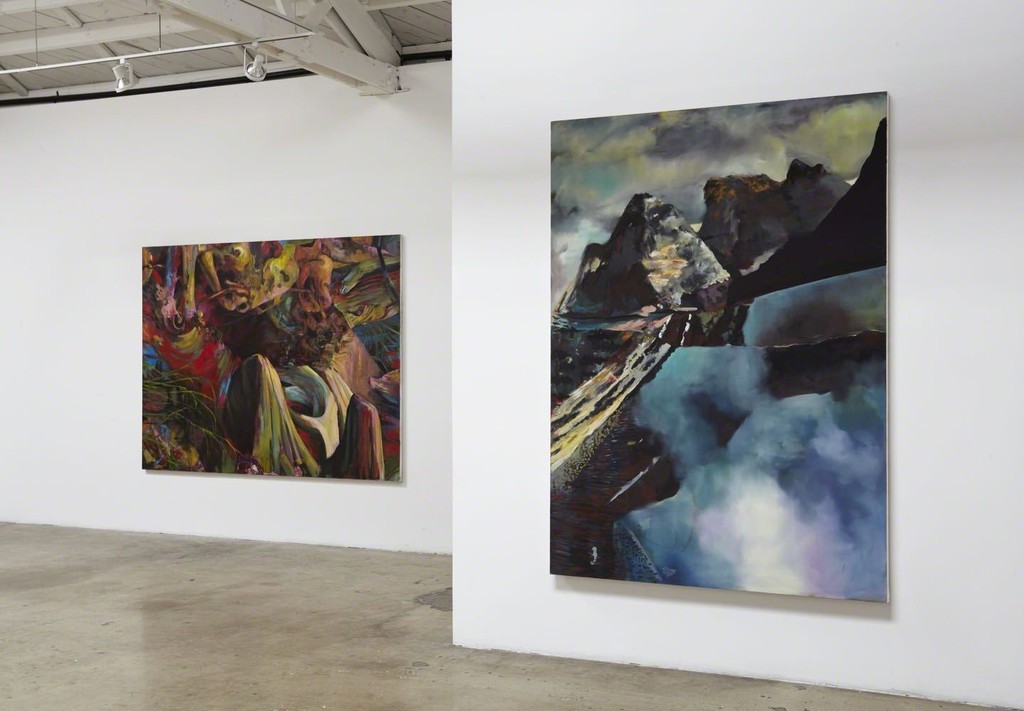 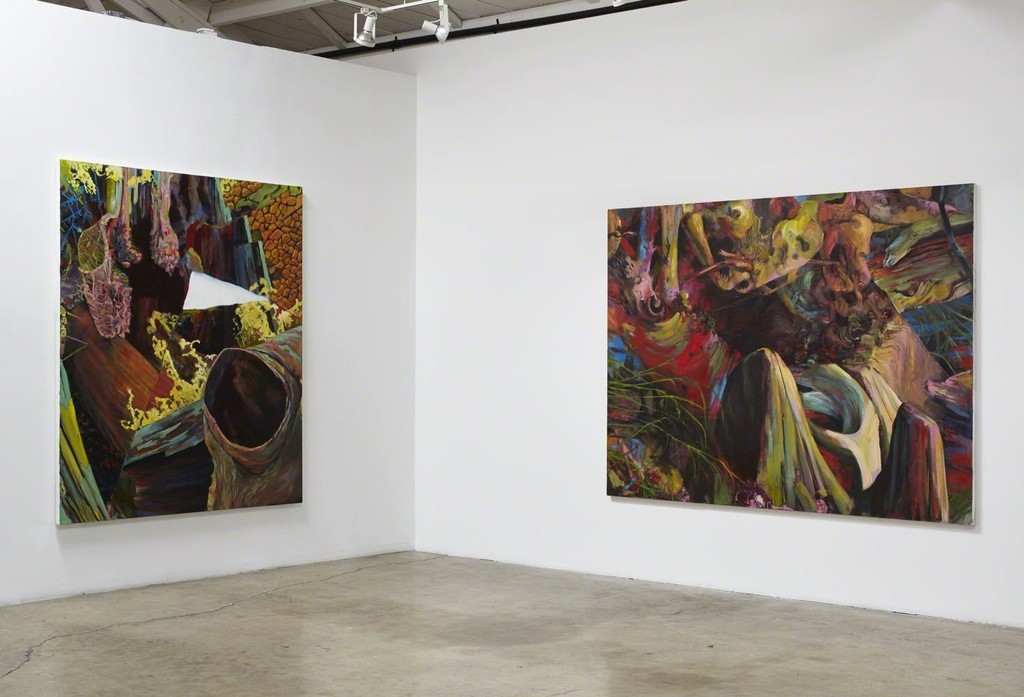 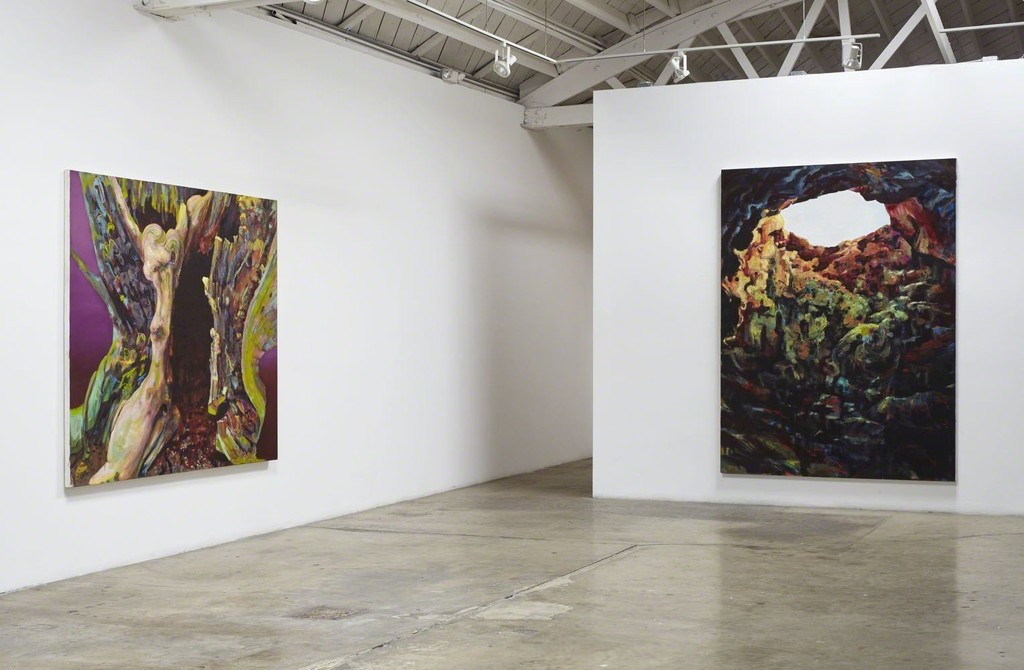 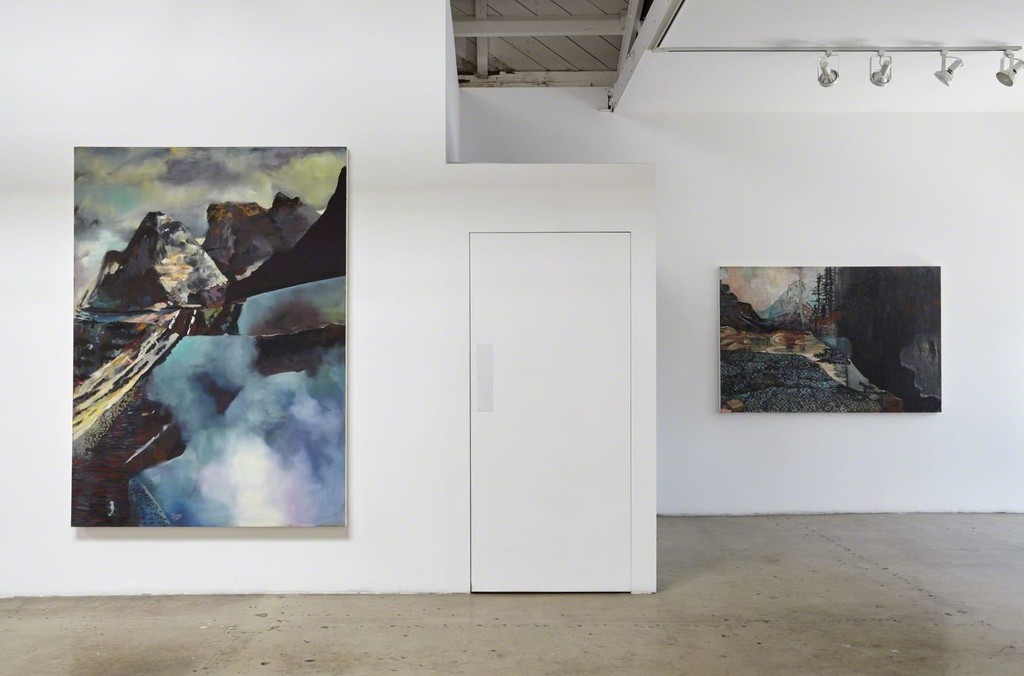 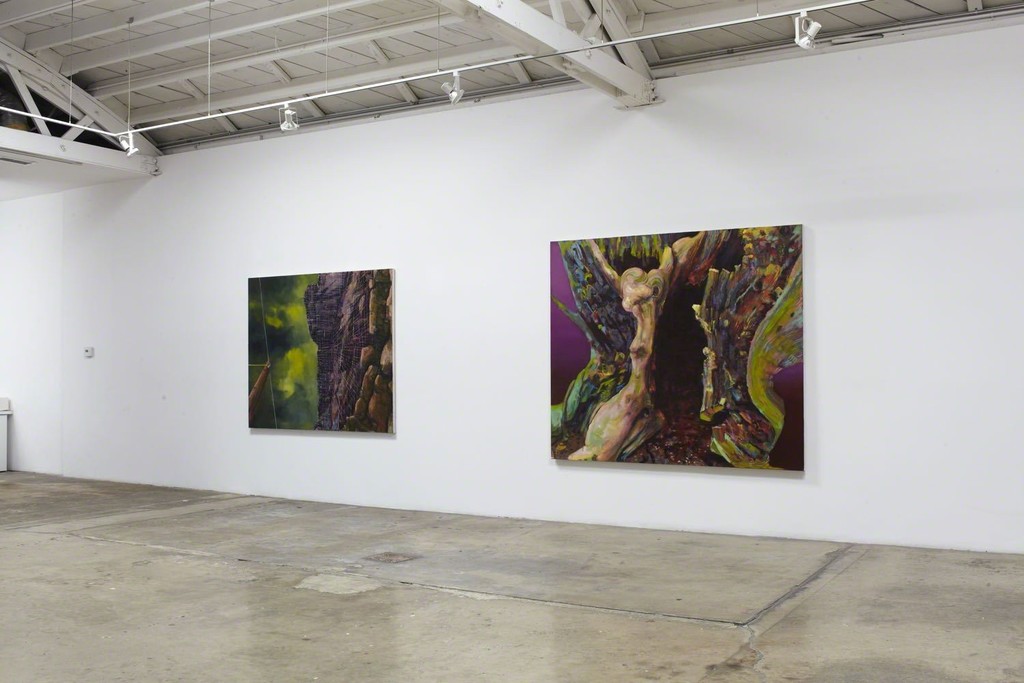 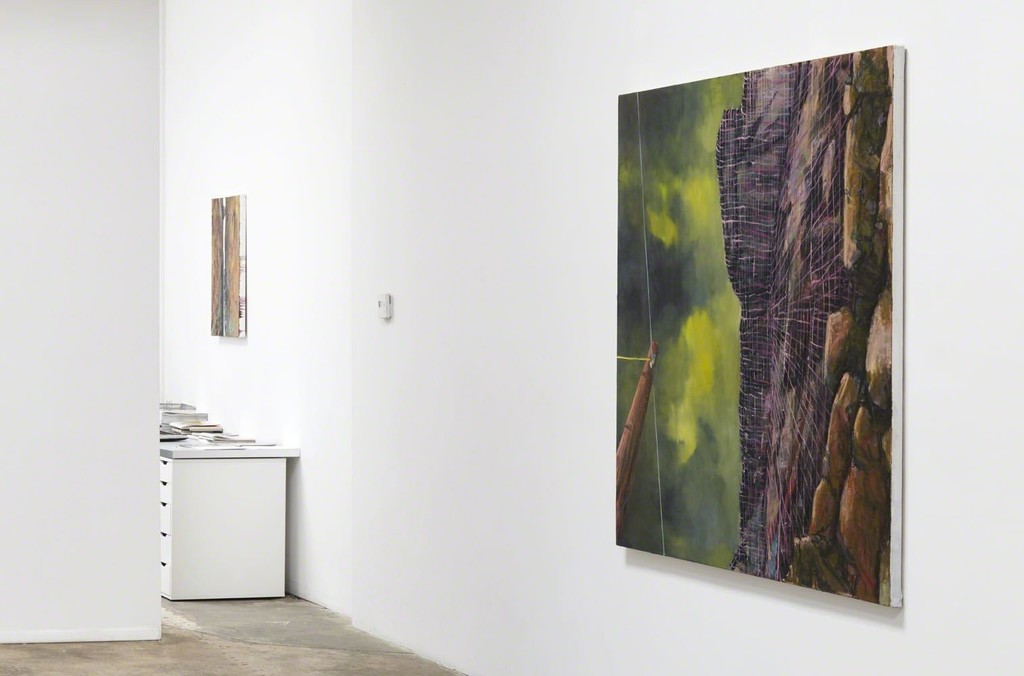 Klowden Mann is thrilled to present when i when if when lie when life (Xavier Villaurrutia), an exhibition of new paintings by Alexandra Wiesenfeld. Wiesenfeld’s third solo show with the gallery offers a meditation on landscape, desire, human presence/absence, and the nostalgia and longing embodied by natural landscape at a moment in which human history faces a growing recognition of its own eventual erasure. The exhibition, featuring large scale works in oil on canvas, is on view from April 18th through May 30th, 2015, with an opening reception on Saturday, April 18th, from 6-8pm, and an artist talk on Saturday May 9th, at 4pm. A catalog is being published on the occasion of the exhibition, with an introductory essay by Christopher Russell.

Wiesenfeld’s newest oil paintings are luscious, vibrant and often uncomfortably intense, showing glimpses of a hyper-realized natural world, with each canvas rendering that world in seductive color and form, while simultaneously addressing its impossibility through instances of purposeful slippage. Many of the paintings appear as if the scene on display has been ripped into two or more parts and then re-assembled slightly off-register. Some of these instances are subtle—the mis-registration of the upper right corner of “Nocturne” is easy to overlook amidst the deep crimsons and heady dynamism of the composition, in which a tree trunk can easily begin to be read as human bone. In others, such as “Slippage,” Wiesenfeld forefronts the shift and erasures, so that they becomes less the occasion for an un-locatable disorientation, and more of the painting’s core experience.

These formal acts of dissonance act to disorient the viewer but also provide an unexpected invitation and point of access. Wiesenfeld states that she manipulates her own and found photos as a source material for paintings in order to “subvert [her] own subjectivity.” By questioning her own authority in this way, as well as that of the “original” image itself, she opens a space for the viewer’s entry. Vertiginous as she intends the paintings to be, they are also a beckoning into her space, an invitation to engage, a call to agency—even if that call carries within it the disbelief that any engagement can prevail.

As Russell states in his catalog essay for the exhibition, “In “Dedicated to X. Villaurrutia,” Wiesenfeld seems to understand that an atheist can dismiss the wrath of god, but cannot escape the inevitability of nature. While taking a very different tone, she revives the Romantic fight of Isidore Ducasse, weighing her own sense of freedom, that internal sense of personal agency, against the brutal realities of the natural world. Wiesenfeld lashes out, tearing naturalism from its visual moorings; painting allows the possibility of preemptive revenge.”

Wiesenfeld has named this body of work in reference to Xavier Villaurrutia—a poet, critic, playwright and significant voice in the Mexican and international literary world of the first part of the 20th century. In so doing, she refers not only to Villaurrutia’s frequent use of landscape as a metaphor for human experience, but also to her own interest in representation in poetic form; in her commitment to the image while always encouraging it to refer outside of itself.

Alexandra Wiesenfeld is a German-born, Los Angeles based artist who has exhibited throughout the United States and in Europe, at venues including Klowden Mann, Happy Lion, Angles Gallery, and the Eagle Rock Cultural Center in Los Angeles, The Irvine Fine Arts Center and the Torrance Art Museum in California, the Dactyl Foundation in New York, the Roswell Museum of Art in New Mexico, the Missoula Museum of Art in Montana, Anton Gallery in Washington, DC, Kunst Karlshütte and Landshut in Germany, and art fairs in San Francisco, Miami, Dallas, and London. She has received a National Endowment for the Arts fellowship, and her work is held in public and private collections nationally and internationally.