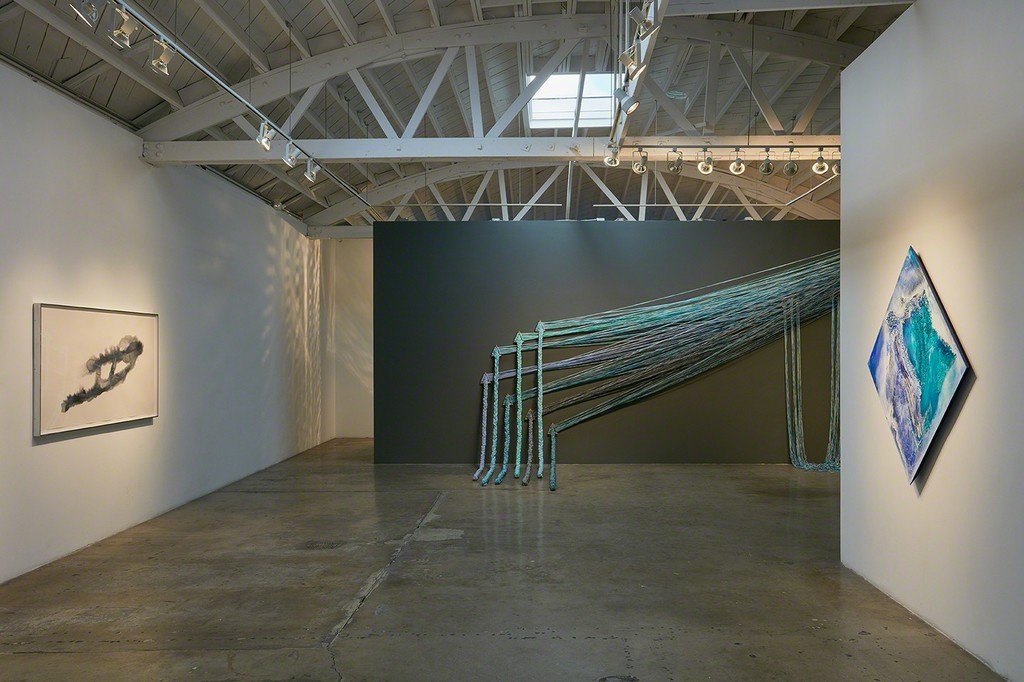 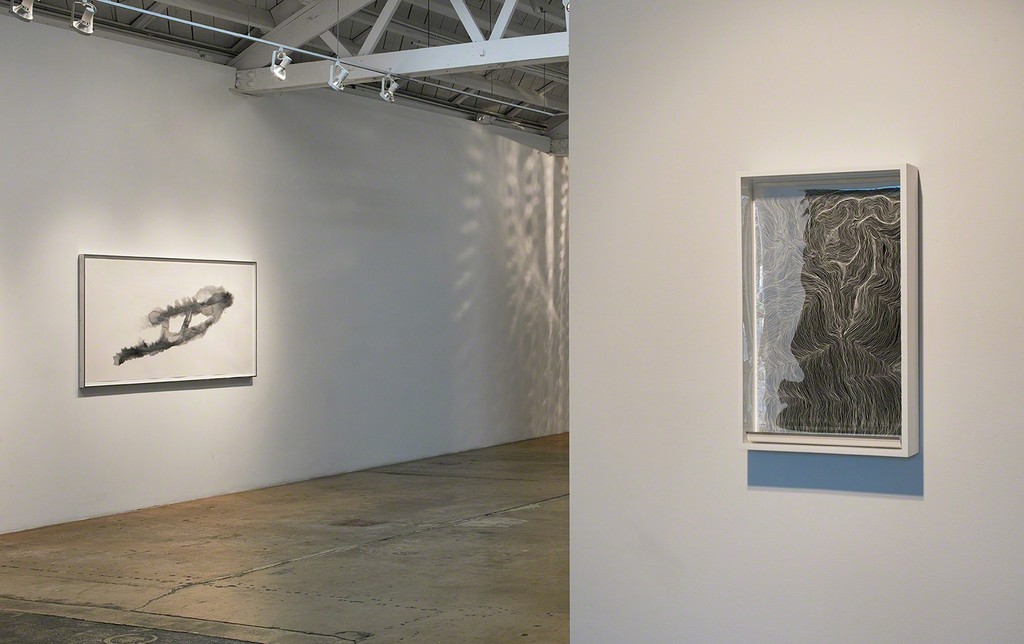 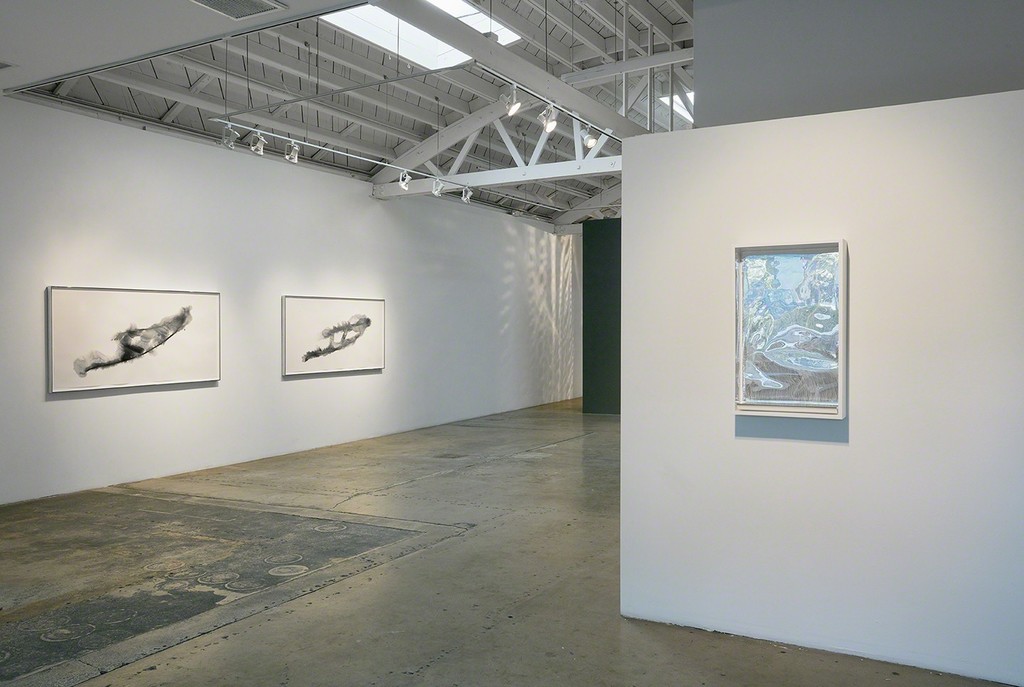 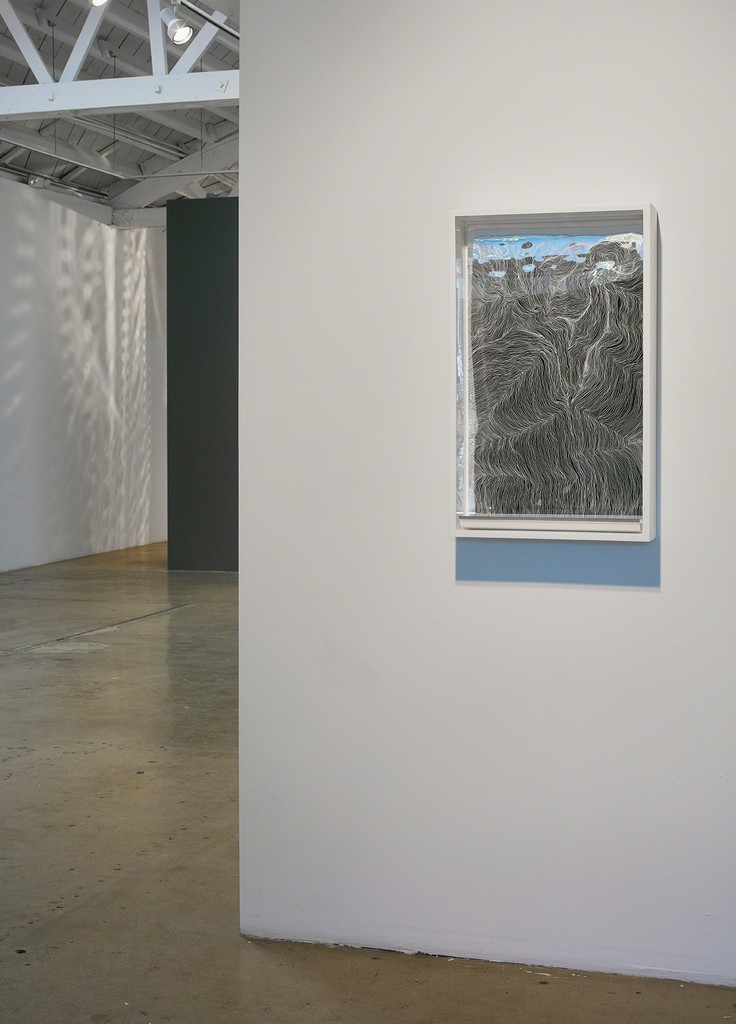 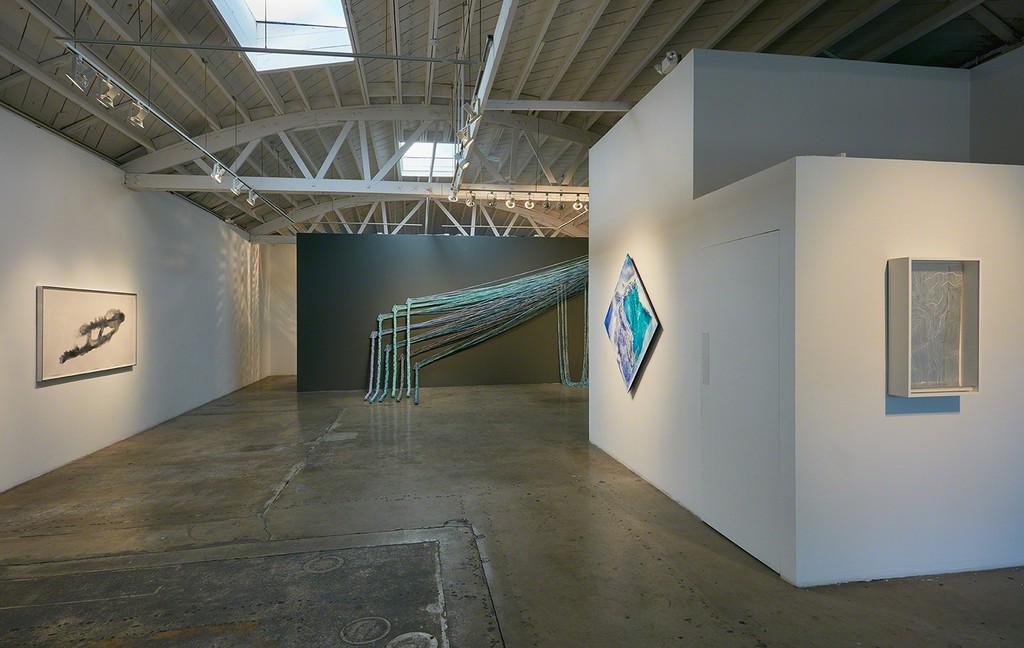 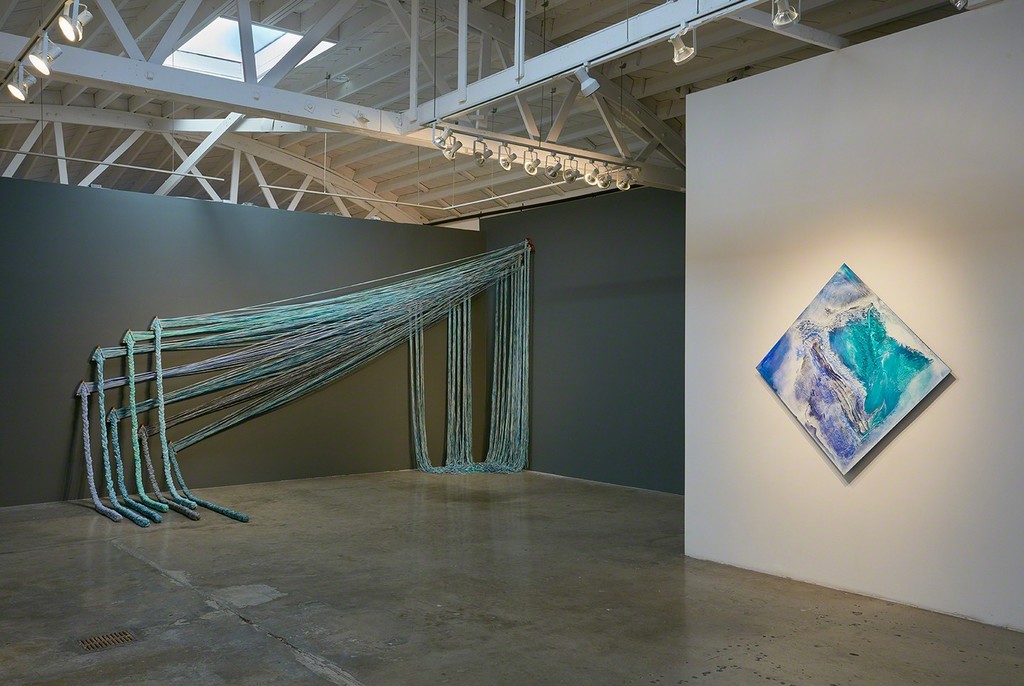 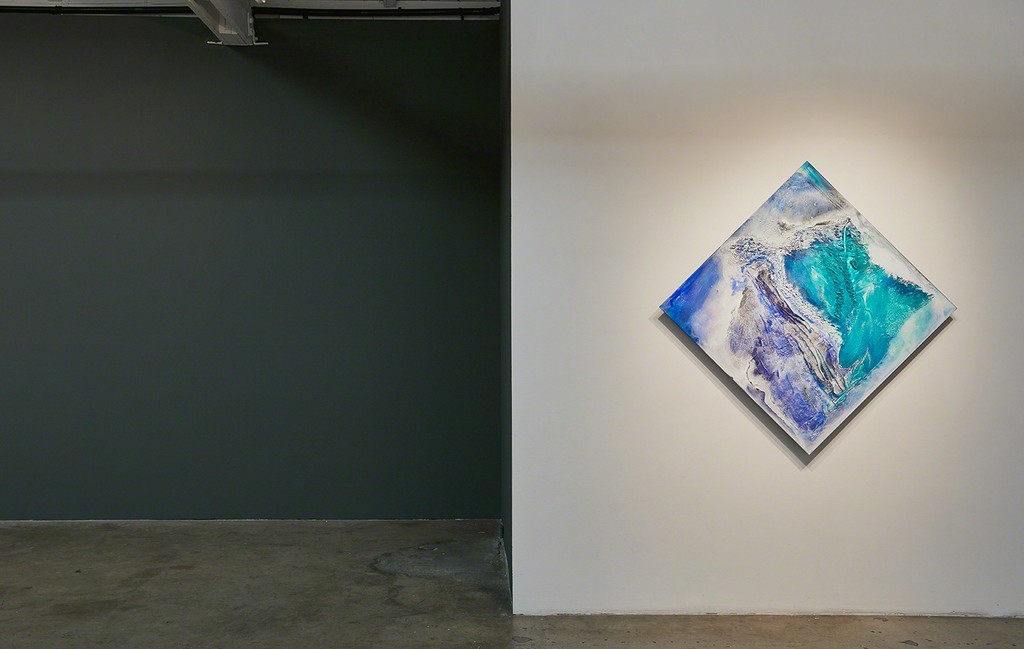 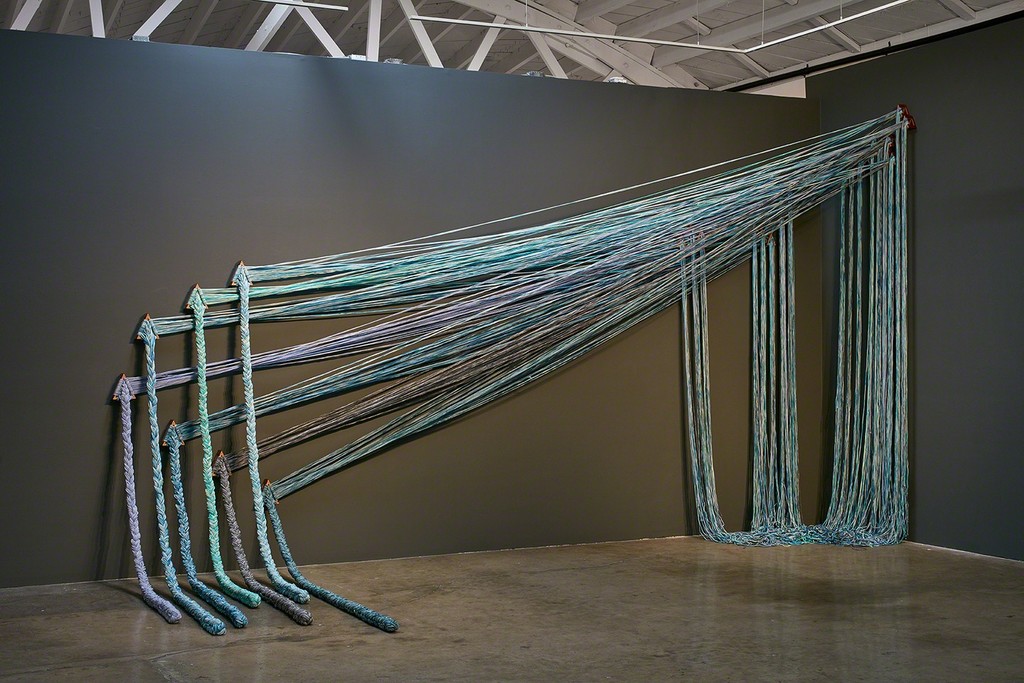 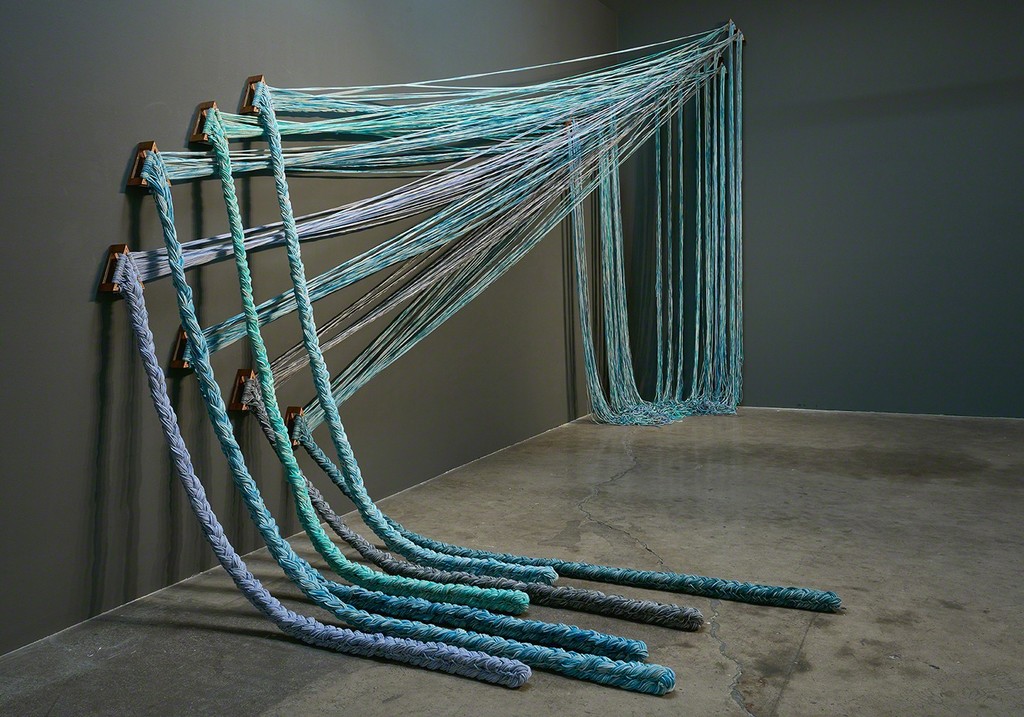 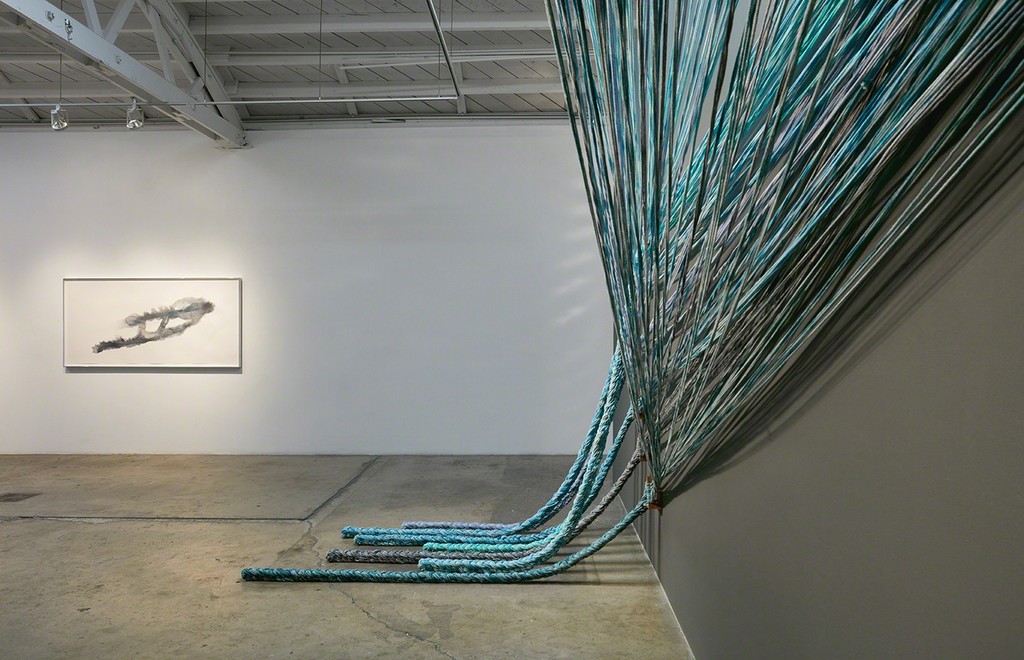 "Many immigrants had brought on board balls of yarn, leaving one end of the line with someone on land. As the ship cleared the dock, the balls unwound amid the farewell shouts and fluttering of handkerchiefs. After the yarn ran out, the long strips remained airborne, sustained by the wind, long after those on land and those at sea had lost sight of each other."

Klowden Mann is proud to present The Letting Go, the gallery’s first solo exhibition of work by Los Angeles-based artist Debra Scacco. The work discusses the impossibility of truly releasing our personal geographies — the trinity of time, memory and place that form our individual identities — while giving voice to the compellingly unattainable fantasy of fixing our complete personal history into one singular place. Composed of a central installation of rope and wood, and large-scale works on paper, board, and mirrored film, the exhibition will be on view from November 7th through January 9th, with an opening reception on Saturday November 7th from 6-8pm, and an Artist Talk on Thursday, December 10th, at 7pm.

Scacco approaches the contemporary experience as one of collective isolation. With the prevalence of individual migration, we carry the weight of our families, the geographies of our youth, our nationalities, ethnicities, and histories with us without the corresponding stability that a rooted multi-generational history might provide. This is a concept born of, and reinforced by, her own personal narrative: born in New York to an Italian immigrant family, with a childhood relocation to the American South, Scacco later spent 16 years abroad in London before her recent move to Los Angeles. In response to these personal migrations and multiple cultural shifts, for the past ten years she has habitually and obsessively striven to understand the geographical markers and movements of her own history, and the corresponding emotional consequences of a life that feels lived in transit even when remaining in place. The result is a consistent return to multiple sets of maps detailing locations that are significant to her cultural narrative.

"Perhaps there is no past or future. Only the perpetual present that contains this trinity of memory."

The works in the main gallery trace the artist’s past according to emotional intention, physical location and fictional projection. The exhibition is anchored both visually and conceptually by The Letting Go, a piece composed of nearly 20,000 feet of hand-dyed nautical rope tethered into an expansive spacial exploration across two of the primary gallery walls. Inspired by the Luciano De Crescenzo quotation written above, the piece is an exercise in connection that is articulated across both specific points and physical planes. The architecture of the work is formed from the seven points of origin Scacco consistently uses in her practice. These points, which represent her emotional geography, are then connected by rope to 19 destination points, each corresponding to a physical location. On the wall, a series of minimal wooden sculptures act as anchors between these points. The rope, dyed in seven shades of blue (each referencing a single point of origin), is wound into three loosely woven parts representing the intertwined relationship of time, memory and place. For Scacco, our impressions of our lives are a direct reflection on the interdependency of these three elements; they cannot be separated or weighed independently, and their impact on our lives is unquantifiable.

Two large-scale works on paper represent the emotional intention of Scacco’s past; a diptych entitled Paralysis of Place. With panoramic dimensions inspired by the proportions of sailor’s maps, the contours are formed from flight paths articulated in washes of paint, and repeated phrases of personal writing inked in the artist’s hand — This is our past in the first piece, and This is our future in the second. Across the gallery space, Sedimentary, a work on sculpted board, relies on layer after layer of application and build-up that creates highly saturated blue tones and textures to form a navigable topography built from spliced histories. The Sedimentary works explore the idea of creating a longed-for fiction from a combined past, while the topography of their textured surfaces allows us to be seduced by the possibility of these utopias despite their clear otherness.

Finally, in the gallery project room, Scacco offers us her rumination on her present: Rio de Porciúncula (1769 - present day). The large drawing, formed with ink on mirrored film, cascades over the top of the gallery wall and curls onto the floor of the space. The drawing begins by mapping the Los Angeles River in its various states—from pre-channelization, to where our intervention has forced its route. This initial shape then echoes out, line by singular line, to create a completely new landscape. The highly reflective nature of the material means that the drawing on its surface is often obscured by the reflected image or light, just as the full picture of the present is impossible to comprehend or capture as it occurs.

Driven by the persistent need to (re)discover permanence in a contemporary life that is by nature always in transition, Scacco’s work is both overtly emotional and highly systematic. Hers is a syntax that remains faithful to sets of rules she has created, where materials and process continually echo intention. Though the specific language is hers, the sentences she forms are ours; she speaks to the overarching feeling of placenesness that has become a shared cultural experience, particularly in larger metropolitan areas, but one that tends to be experienced in isolation. The pieces may begin and end with concrete locations and history, but the story—and meaning—is found in the spaces between.

Debra Scacco (b. 1976, New York) received a BA in Studio Art from Richmond University, London in 1998. She has exhibited extensively, including solo exhibitions at Marine Contemporary (Los Angeles), and group exhibitions at Royal Academy of Arts (London), Charlie James Gallery (Los Angeles), Patrick Heide Contemporary (London), and Royale Projects (Palm Desert). Scacco's work has been written about and featured in the Los Angeles Times, Huffington Post, and Art in America. In 2012 she was the first Artist-in-Residence at the Statue of Liberty National Monument and Ellis Island Museum. In 2009, she was nominated for the Jerwood Drawing Prize (UK). She currently lives and works in Los Angeles.