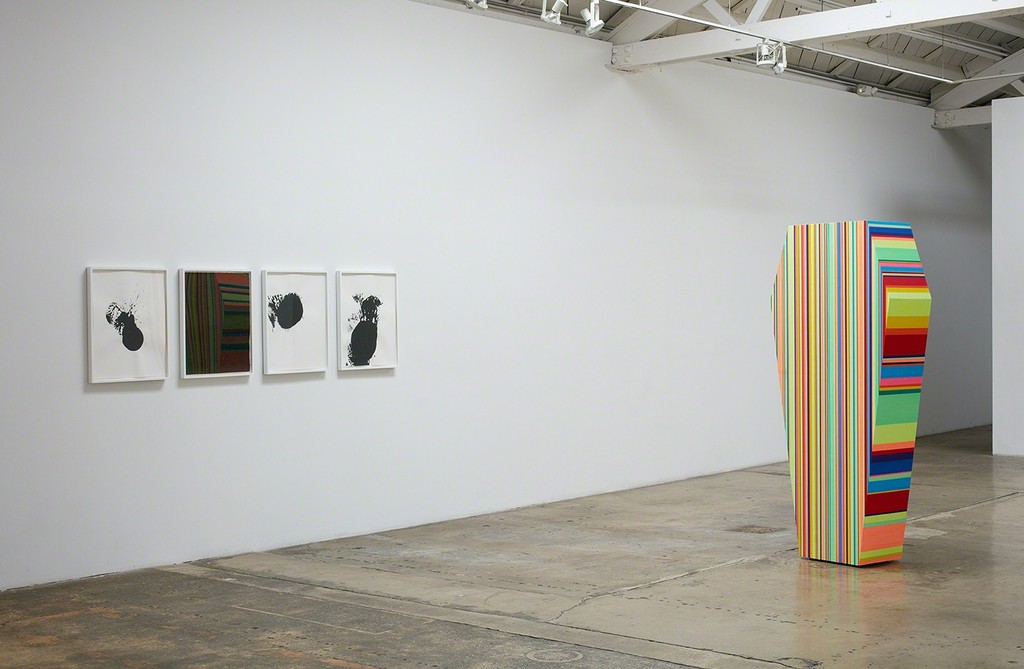 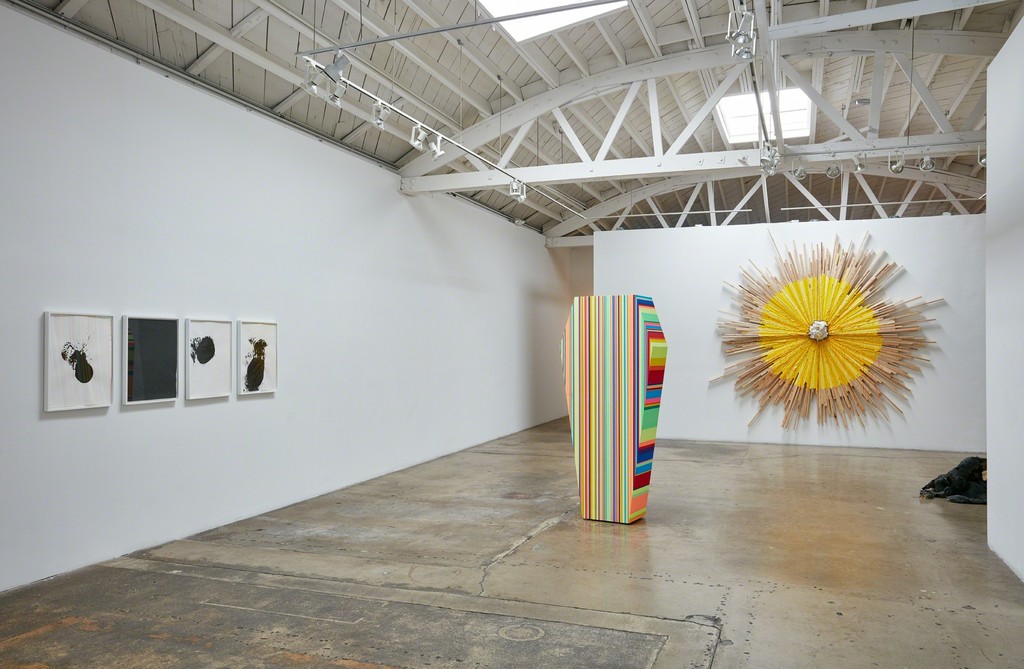 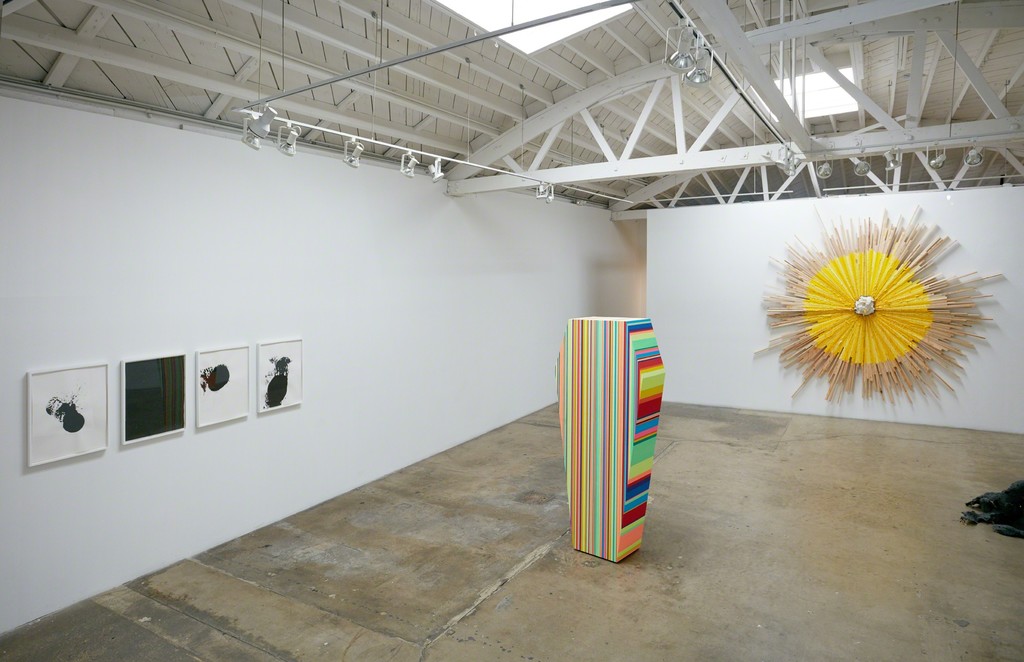 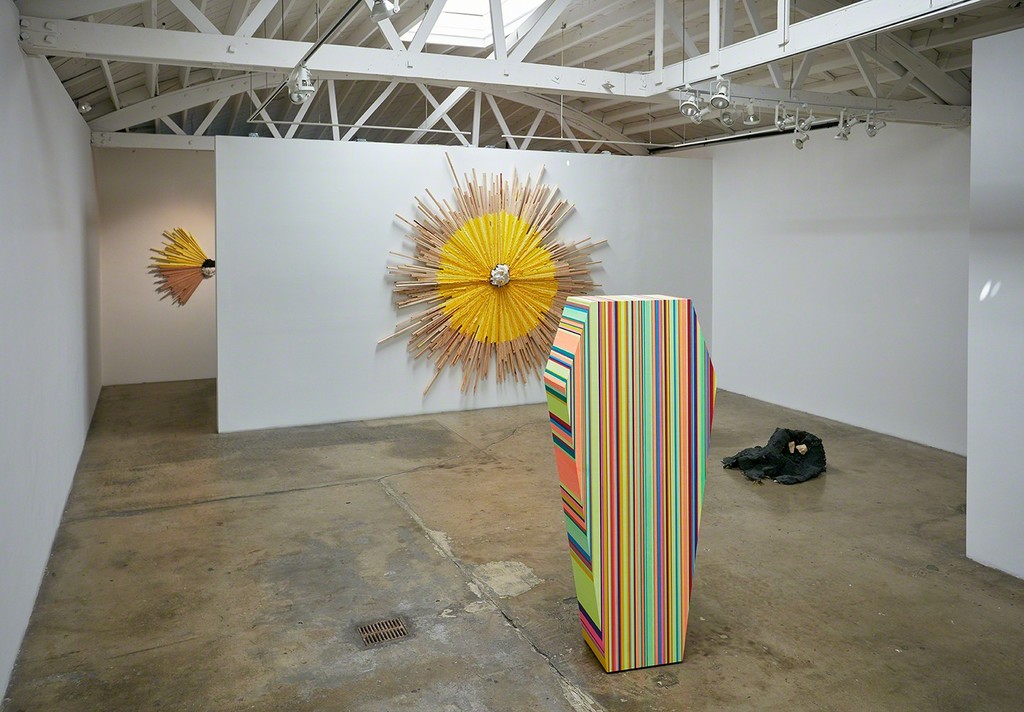 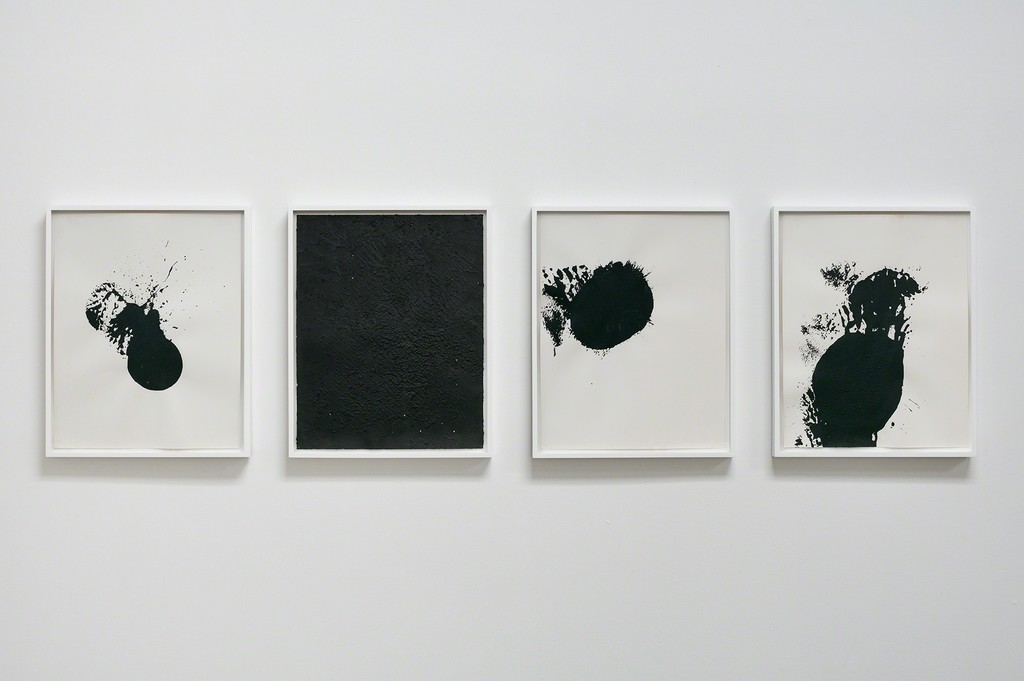 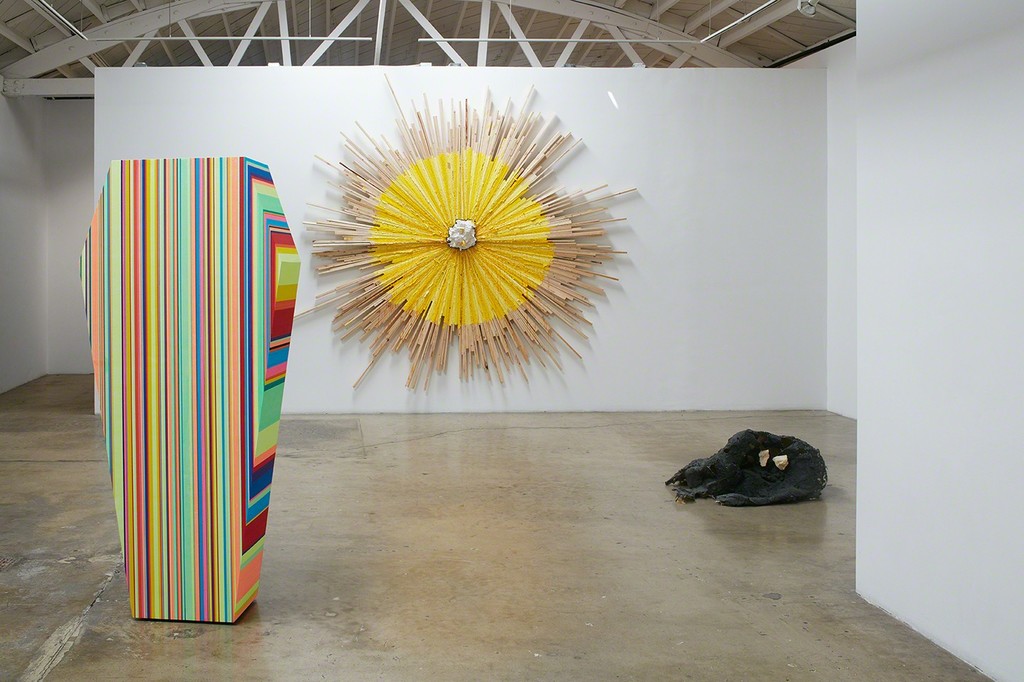 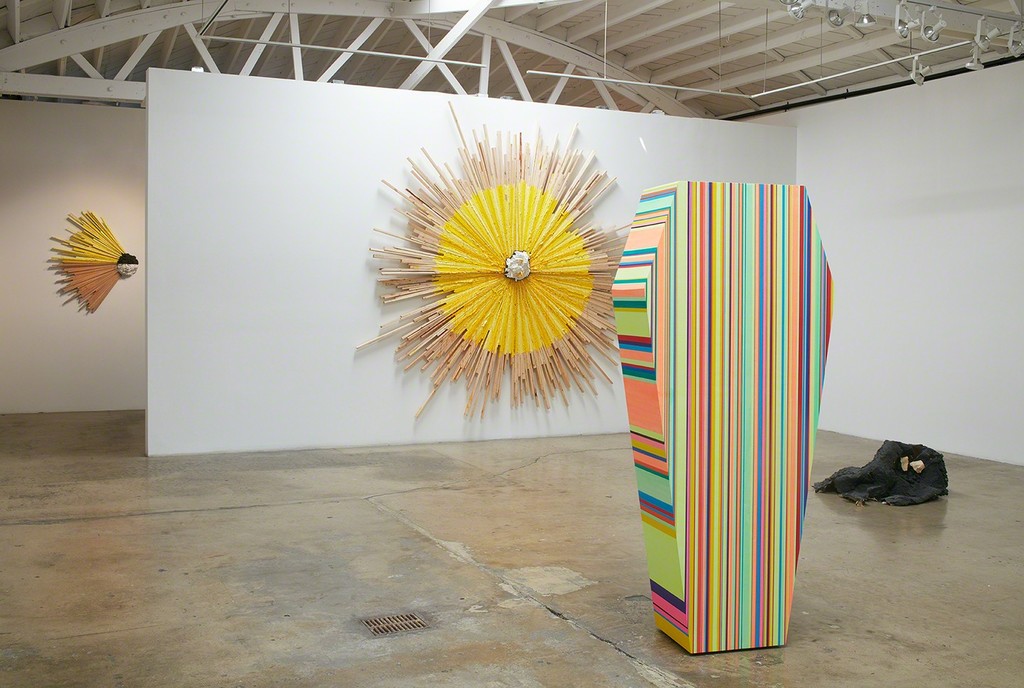 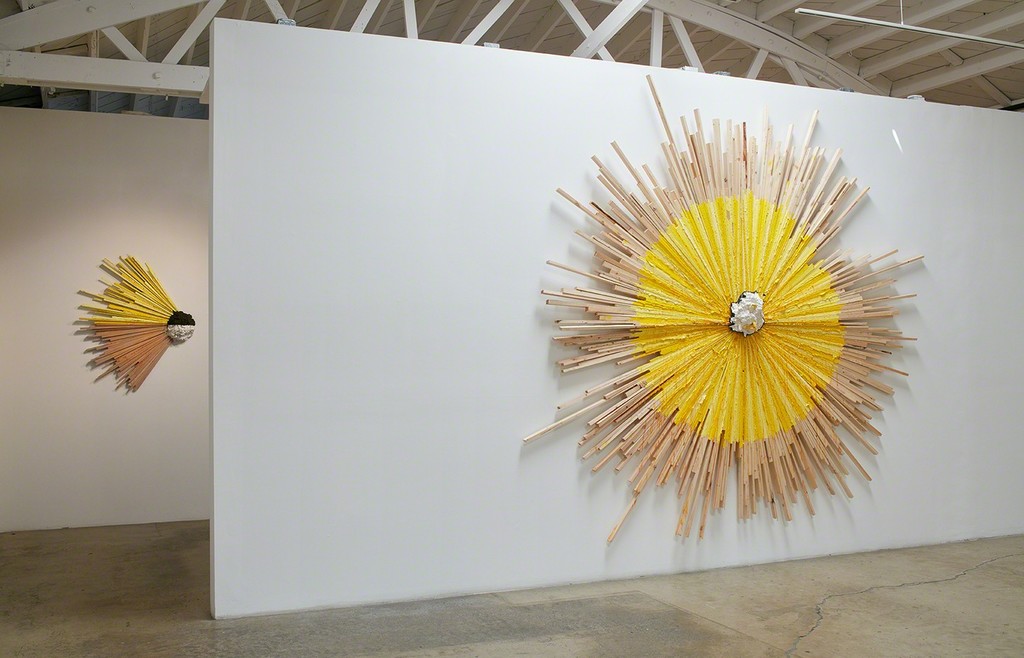 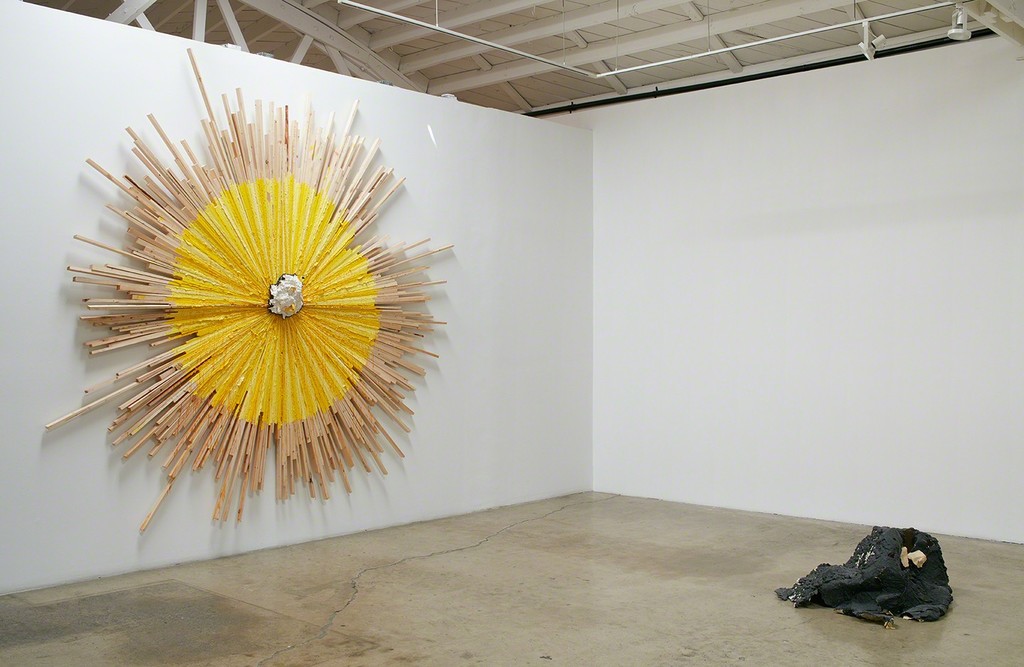 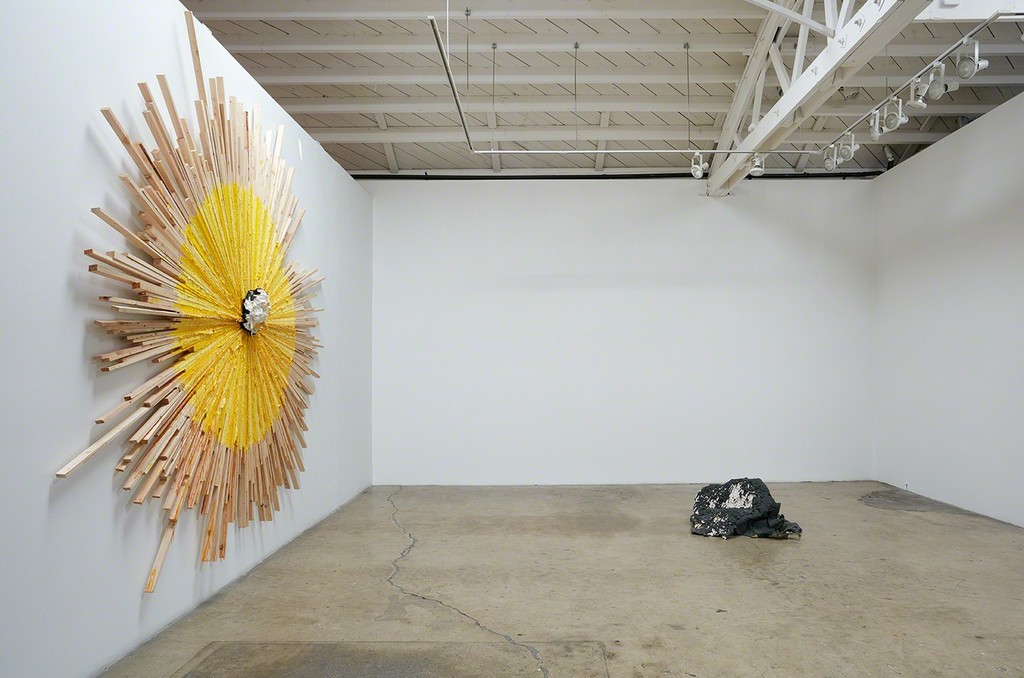 Klowden Mann is proud to present A Cold War, the gallery’s second solo exhibition with Los Angeles-based artist Jamison Carter. The exhibition will be on view from September 12th through October 24th, 2015, with an opening reception on Saturday September 12th, from 6-8pm, and a catalog published on the occasion of the exhibition.

The exhibition features six new sculptural works, freestanding as well as wall-mounted, and four black-on-white monoprints. Carter’s interest in material investigation is at the core of this body of work, as is his commitment to highlighting and extending points of tension between formal elements, and their conceptual/intellectual/visceral counterparts. Working with hand-cut wood, hand-moulded plaster, paint, paint pens, colored glue, and paper mache, Carter utilizes a system of purposefully imperfect repetition to present tangible, pared down representations of dichotomy, time-based perception, and the space where rigidity and fluidity find uneasy interdependence. Expanding upon his visual and thematic vocabulary from his prior body of work, which focused on the meeting point and reconciliation of dark visceral form and controlled light elements across space, this new body of work moves in the direction of their contentious integration.

Throughout the show, Carter’s individual pieces invoke symbols and concepts that are culturally ubiquitous and ground them in tangible form. Upon entering the gallery space, the viewer is confronted with O Superman, a life-size wooden coffin, standing on one end, covered entirely in Carter’s rigid, yet hand-drawn, fluorescent lines of varying widths and hues. This is a contemporary sarcophagus, and a kind of self-portrait. At just over 6’3” tall it is made to fit Carter’s height, and yet there is no lid, no point of entry, and from every perspective its intensely directed fluorescent lines seem to propose an insistence on surface. At the same time, the verticality of the lines on the coffin’s front and back assert the invitation—demand, even—to look up. The piece seems to ask: if this is a container, what is it meant to contain? Unlike the Pop Art its consumable surface may bring to mind, Carter is not invoking repetition to argue for the primacy of surface, he invokes repetition for the sake of direction; he is not refuting depth, but referring outside the object as the site of its determination. The title of the piece references Laurie Anderson’s 1981 song O Superman (for Massenet), which spoke to the fallibility of the dominant God, country, and technology ethos of the time, and unexpectedly hit the top of the pop music charts. Carter’s O Superman argues that we are both grounded and compelled by our endpoint, and that during a time that is (still) defined by tension, we are simultaneously unified and isolated in our desire to deny our eventual demise.

Carter's wall-mounted sculptures, ranging in size from 3 by 4 feet to 10 by 10 feet, take on the alchemical notions of night and day as overarching examples of dichotomy, each containing its opposite. The largest of these pieces represents the sun, ten by ten feet in size, forming a gritty and expansive halo of plaster and wood shards, partially painted and partially raw. The smaller two pieces offer the sunrise and moonrise, with drips of colored glue directing our gaze towards gravity (or defying it) even as we look up, and the plaster center out of which the shards form is split in two halves of black and white. In their radiating repeated lines and their response-inducing grit, these pieces nod to the Baroque—Bernini’s Ecstasy of St. Teresa has presence here—and that period’s distillation of human experience to the hyperbolic point at which identification becomes simultaneously impossible and inescapable, an uncontrollable recognition of self and other, and an invitation to exist in the awkward, potent, potentially transcendent space in which the two meet.

Jamison Carter (b. 1973, Winston-Salem, North Carolina) received his MFA from the Cranbrook Academy of Art in 2001, and currently lives and works in Los Angeles. Solo exhibitions in Los Angeles include Klowden Mann, California State University Northridge, and MorYork Gallery, and he has exhibited in group exhibitions at galleries and public institutions throughout California, and in Italy at the Museo Archeologico in Amelia. His work is currently on view in the exhibition We Must Risk Delight: Twenty Artists from Los Angeles with Bardo LA as part of the 56th Venice Biennale in Venice, Italy. He has exhibited at art fairs in Brussels, Chicago, San Francisco, Houston, and Miami. His recent two person exhibition at LAX Airport with Bardo LA was the subject of a feature on KCET’s Artbound, and his work has been reviewed in New American Paintings, LA Weekly, and elsewhere. Along with numerous private collections, his work is held in the permanent collection of Weatherspoon Gallery, The University of North Carolina at Greensboro. He teaches sculpture, drawing, and three-dimensional design at Los Angeles Valley College.