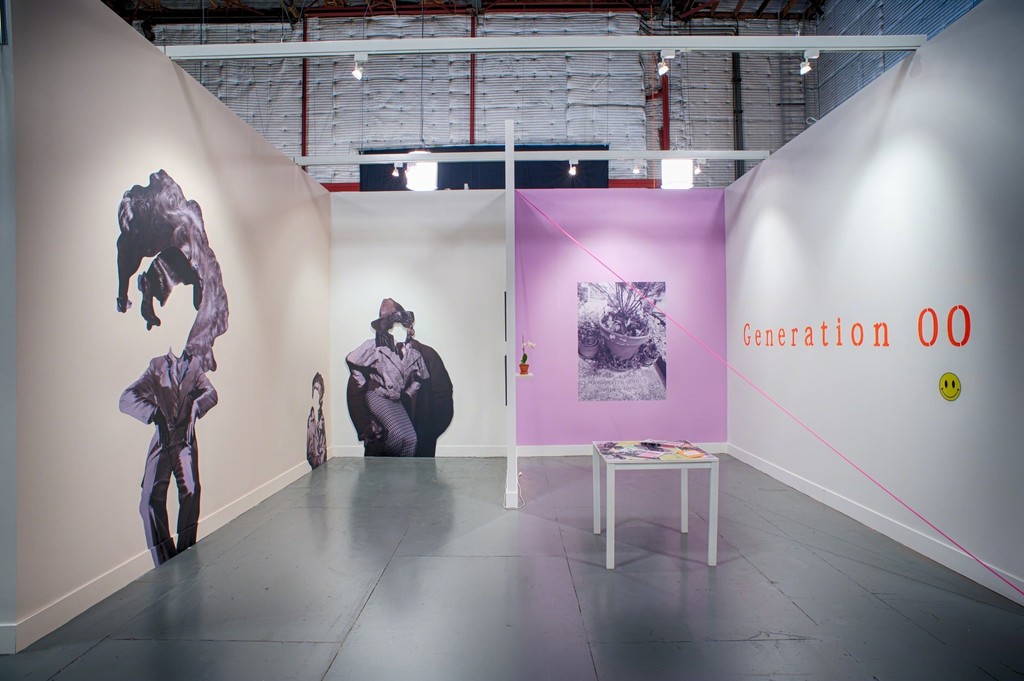 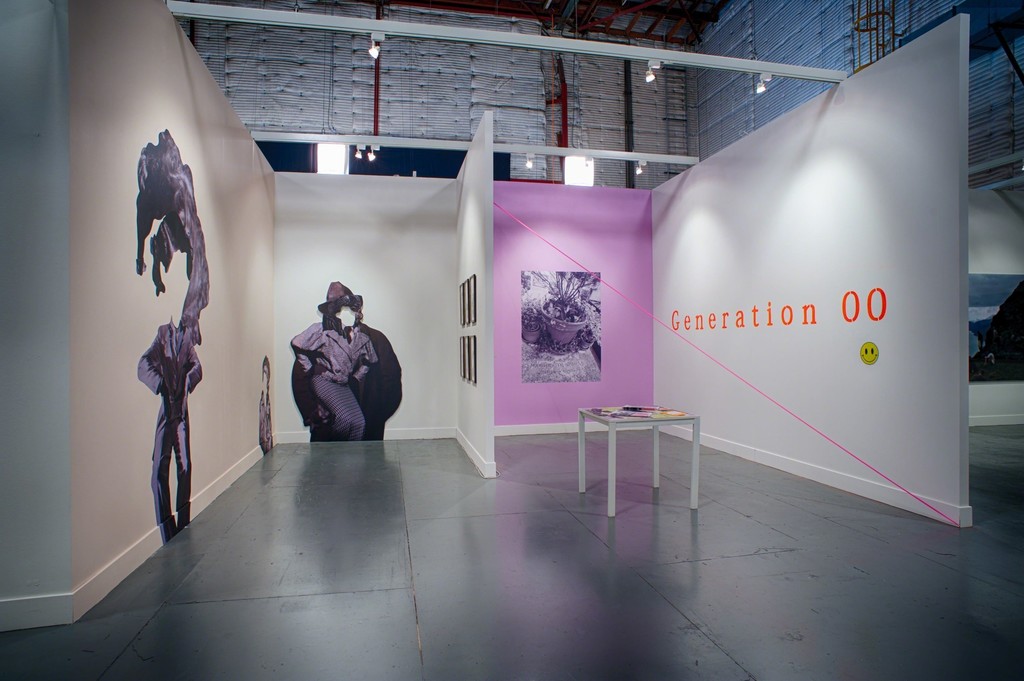 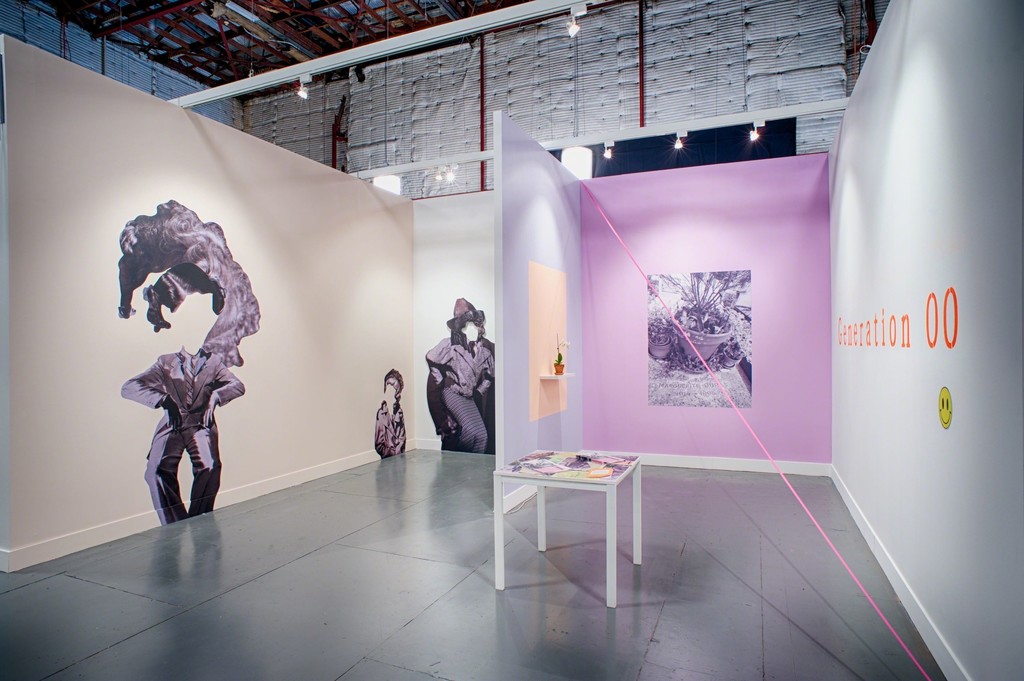 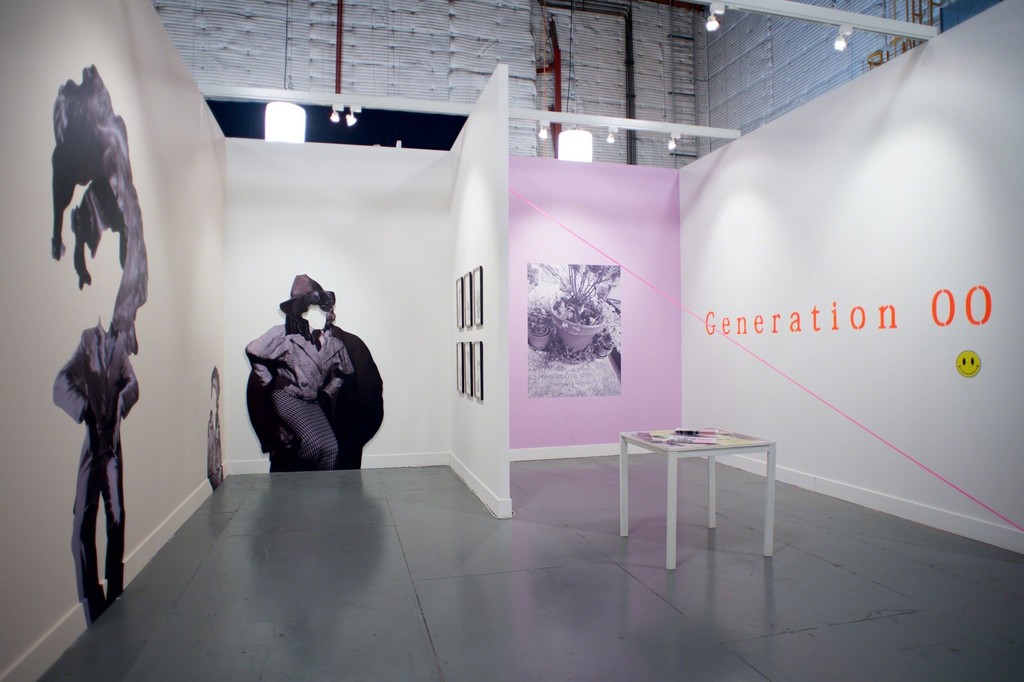 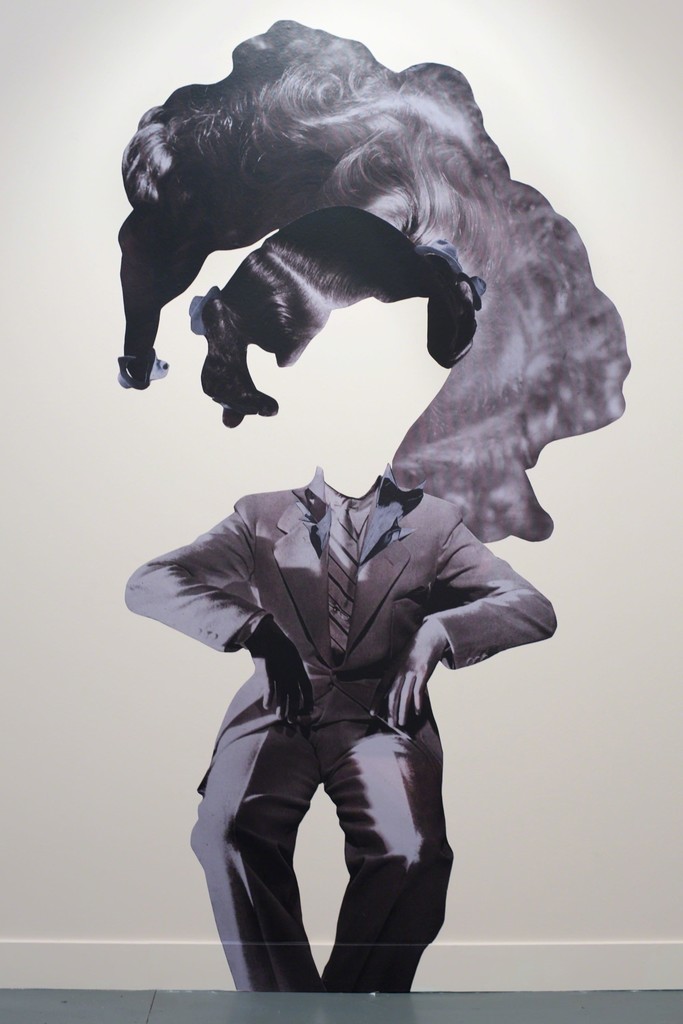 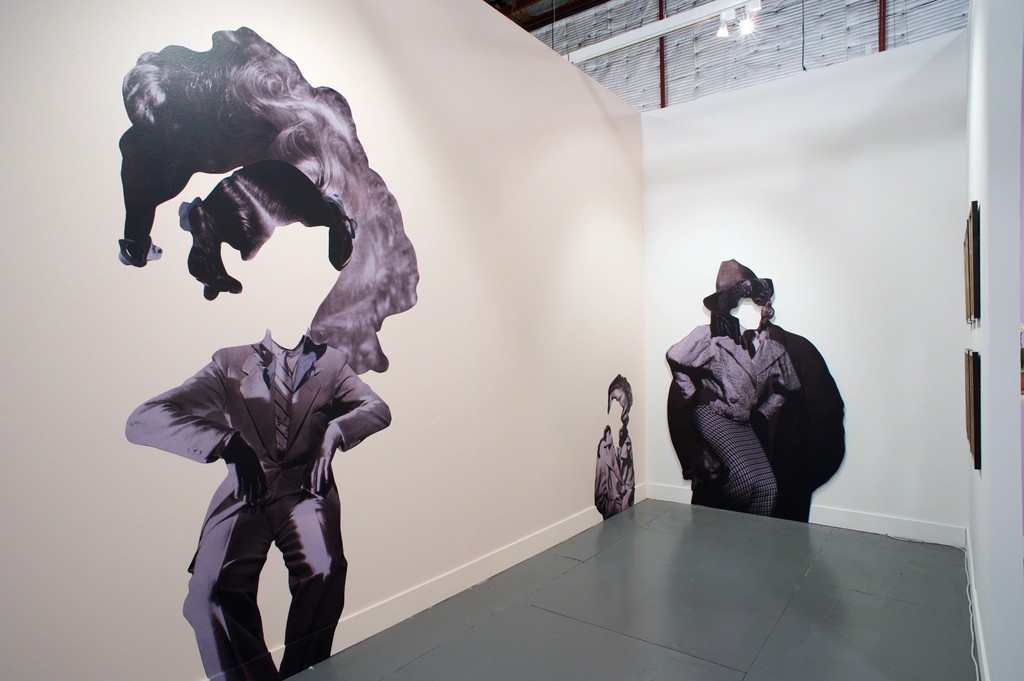 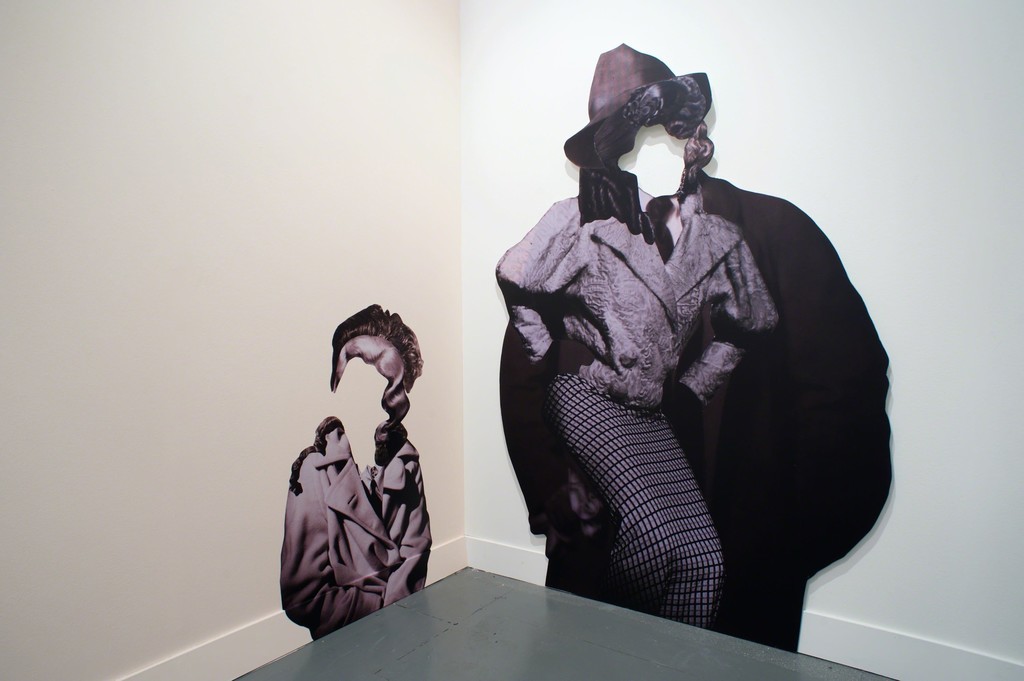 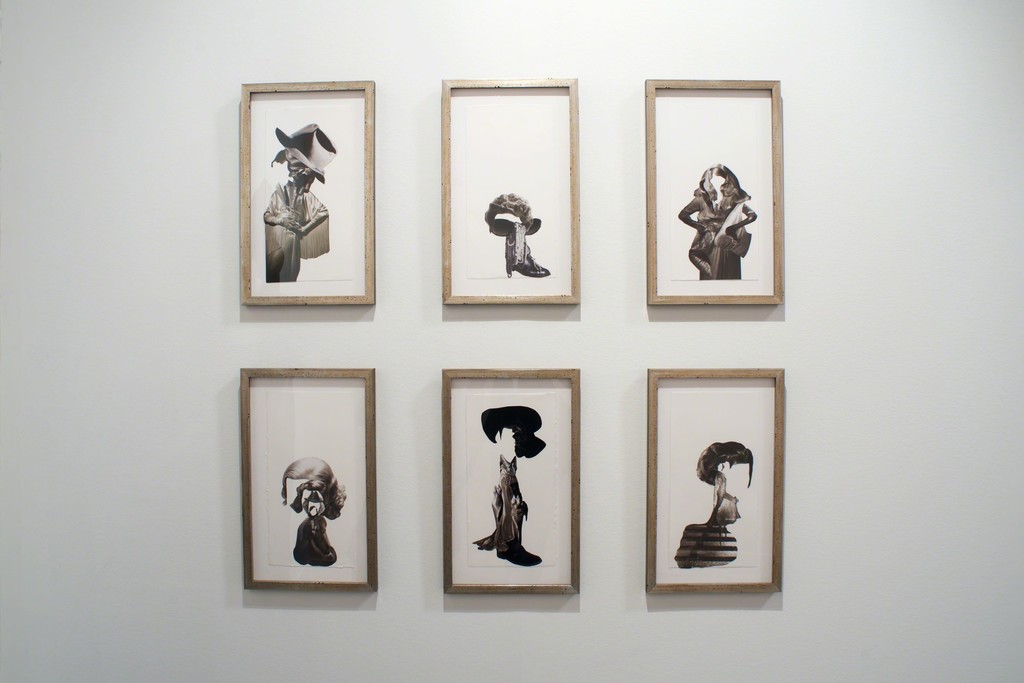 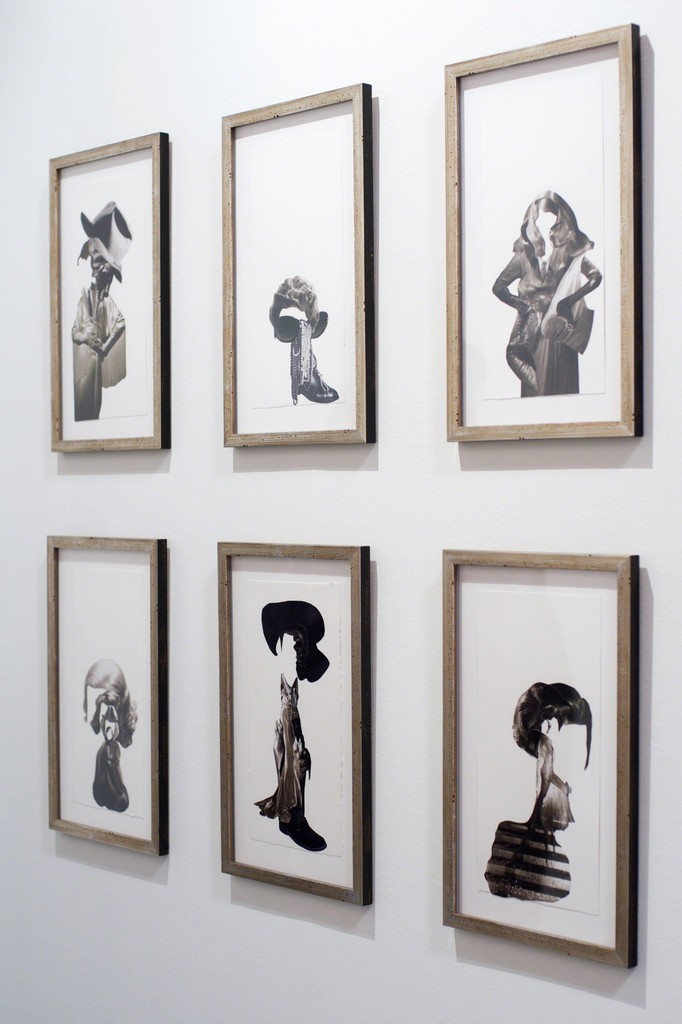 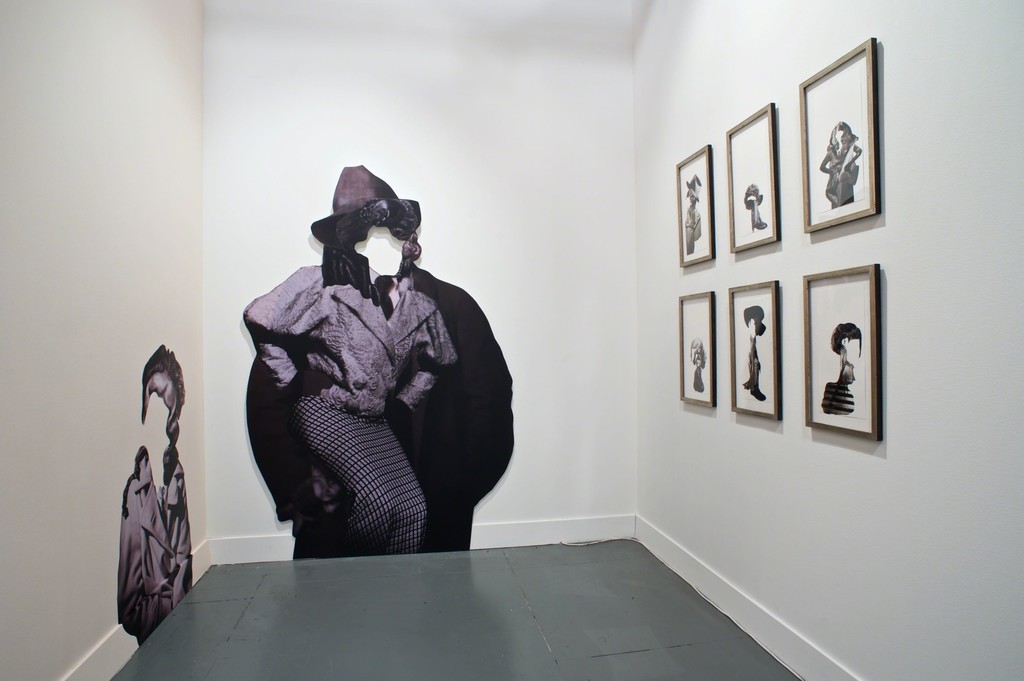 Klowden Mann is very pleased to announce our participation in Paris Photo Los Angeles, with an exhibition of new and site-specific work by gallery artists Bettina Hubby and Grace Ndiritu. Paris Photo Los Angeles takes place from May 1st to May 3rd 2015, presenting historical and contemporary bodies of works, cutting edge solo shows, and book projects by renowned and emerging artists in the legendary Paramount Pictures’ soundstage and the New York Street Backlot’s exclusive movie set replicas of New York City streets. Presented as two solo exhibitions within one booth, Hubby and Ndiritu each speak directly to the fair as exhibition site, with Hubby offering a presentation of work that takes the embedded history of the Paramount movie studio is its catalyst, and Ndiritu installing work that engages with the power dynamic of the art fair itself. Paris Photo is located at Paramount Pictures Studios.

Bettina Hubby’s photo collages take images from the golden age of Hollywood as their starting point, reconfiguring black and white photographs from Paramount’s heyday in the 20’s, 30’s and 40’s to create physical forms that redefine their own boundaries while offering insight into the communal and individual construction of identity, the power embedded in play, and the play of power. Hubby’s presentation will include both framed original works, and large-scale vinyl decals mounted directly to the walls. Titling the series, “Come Up and See Me Sometime,” Hubby states of the work “I used Mae West as the muse for the work due to her sharp wit, bawdy honesty, and bombastic glamor. All of the works are titled with quotes by the famous female stars of Paramount’s screen. By using hair-do upon hair-do and suit upon gown I created ‘glamorousities', or ‘glamonsters' that resonate to me, the fixings, the facade, but also the allure and dreaminess of fame. Its about the 'gown' of fame that seems so effortlessly draped on these seemingly blemishless beings and the siren song of that era that is photographically and filmicly preserved, but can never be relived. They are also about the strong females that fought for their place in the male dominated 'producership' of their time, the suits that backed the stars and the handshakes that sealed the deals.” Figures expanding upon the walls invite viewers into recognition of the history of the studio, while Hubby also forefronts the way in which cultural and artistic production is a constant interplay between presence and nostalgia. Beautiful, menacing, and humorous, the pieces expand upon the language of her applauded exhibition at Klowden Mann in 2013, building upon her consistent ability to simultaneously support, engage with, and challenge the conventions of the exhibition setting.

Grace Ndiritu’s “AQFM VOLUME 5: PARIS PHOTO LOS ANGELES” is the fifth edition of Ndiritu’s A Quest For Meaning (AQFM) series, and the first to be exhibited in the United States. Of the series, Ndiritu states “A Quest For Meaning is a universal narrative, a creation story from the beginning of time. Told through photography it tells ‘stories’ between similarly disparate objects and events from the Big Bang until now, by conjuring up and making new connections between them.” Closely connected to her interests in the moving image, the various themes in AQFM perpetually expand to create photographic constellations. For this fifth edition, Ndiritu has expanded her vision into the future of a new generation of artists, known as ‘art ravers’, who enter the art world to usurp the authority of the art market. Ndiritu began working with this idea by spray painting the text ‘Generation 00’ on walls during previous editions of AQFM in Rabat and Buenos Aires in 2014. In this iteration, Ndiritu celebrates the ‘Mindless Optimism’ of the art market while simultaneously critiquing what she presents as the death of the art, in relationship to its unwieldy hegemony over artistic production in today’s world, She references the menacing smiley face symbol of the ‘art ravers’, now removed from its original warehouse party context and instead transported to its new home of high production at Paris Photo LA. Ndiritu forefronts her large scale photograph of Marguerite Duras’ gravestone, taken at Cimetière du Montparnasse in Paris, as a way to utilize the platform of the commercial art as a theatrical stage in which to enact the complex power dynamics between the different players of Artist and Gallerists, Collectors and Institutions. Duras was a leading commentator on human relationships, as demonstrated powerfully in her novel and film ‘The Lover’, and by referencing her work Ndiritu reflects on the passionate yet complex love affair between Art and Money. For each edition of AQFM Ndiritu produces a periodical, and has produced a new edition for the fair, this time featuring an interview between herself and Turner Prize nominee Marvin Gaye Chetwynd about the current wave of government funding cuts for art, and the hierarchies of power concerning craft (female labour) and high production (masculine values) and how the lack of regulation of the art market affects artists’ earning power.

Bettina Hubby (New York) received her MFA from the School of Visual Arts in New York. Her practice is wideranging, encompassing curatorial and project-based work as well as more traditional media such as collage, drawing, printmaking, sculpture and photography. Hubby’s projects engage diverse communities and often exist in settings that challenge the conventions of exhibition spaces, celebrating collaboration and resisting easy categorization. Her work and projects have been featured at in Los Angeles at Klowden Mann (2013), Thanks for the Mammaries at ForYourArt (2014), The Grinstein Artist Invitational at Rosamund Felsen Gallery chosen by Ed Ruscha (2014), installation and curated show 8th + Hope + Hubby with Side Street Projects (2014), The Property Group show curated by Chris Olivera (2014), Dig the Dig the Santa Monica Museum of Art (2013), Were Not Now at Klowden Mann (2013), Get Hubbied book launch at LACMA (2012), Site two person exhibition at Paris Gallery at La Verne University (2013), The Eagle Rock Rock and Eagle Shop (2012), The Call of the Wild curated by Leonardo Bravo at LA Mart (2012), Five Spot curated by Shana Nys Dambrot at Andrew Shire Gallery (2012), in Home Show at the California Arts Foundation in Santa Barbara (2011), curated conceptual and celebratory wedding at the Center for the Arts in Eagle Rock Get Hubbied (2011), A Picnic in Eden with the Company Gallery (2009), multi-disciplinary project and homage to the ideal city Co-Tour (2008), Forming Storming Norming and Performing at Circus Gallery (2008), co-exhibition of garments and photography Double Fantasy at Naked (2008), with Klowden Mann at art fairs in Dallas (2014), San Francisco (2013), Miami (2012). She was featured in Wallpaper Magazine as one of the top creative talents in Los Angeles (2015), ArtForum’s best of 2014 (2014), has been featured on NPR (2013), and her work has been written about in LA Weekly (2014), New York Magazine (2014), L.A. Times (2013), Artslant (2013), the Huffington Post (2014), and many others.
Grace Ndiritu (Kenya/UK) studied Textile Art at Winchester School of Art, UK, De Ateliers, Amsterdam 1998-2000, UK studio residency, Delfina Studio Trust, London (2004-2006) International Residency, Recollets, Paris (2013), MACBA & L'Appartement 22, Rabat, international residency (2014), Galveston Artists Residency, Texas (2014 -2015). Upcoming solo exhibitions will be taking place at the Glasgow School of Art (Sept. 2015) in conjunction with the Turner Prize 2015, and at Klowden Mann in Los Angeles (April 2016). Ndiritu’s recent solo exhibitions took place at La Ira De Dios, Buenos Aires (2014), Chisenhale Gallery, London (2007), the 51st Venice Biennale (2005) and Ikon Gallery, Birmingham (2005). Recent solo performances and screenings include Museum Modern of Art, Warsaw (2014), Musee Chasse & Nature and Centre Pompidou, Paris (2013), ICA Artist Film Survey, London (2011), Artprojx at Prince Charles Cinema London (2009).Upcoming and recent group shows include MAC International Art Prize, Belfast (2014), Kulte Gallery, Casablanca (2014), MACBA, Barcelona (2014), 9th Bamako Biennale (2011), International Center of Photography, New York (2009), 8th Dakar Biennale (2008). She was awarded 1st Prize for Landscape Video and Photography, at the Centre for Art and Nature, Spain (2010). Her work has been commissioned by Glasgow School of Art (2015), MACBA, Barcelona (2014), Bluecoat Gallery, Liverpool (2010) and Glynn Vivian Gallery, Wales (2006). Her work has been featured in Apollo Magazine 40 Under 40 (2014); Phaidon: The 21st Century Art Book (2014) and is also housed in museum collections such as the Metropolitan Museum of Art, New York and private collections such as the Walther Collection, New York and Germany. Her experimental art writing has been published by Animal Shelter Journal Semiotext(e) MIT Press, Metropolis M art magazine and Oxford University Press.