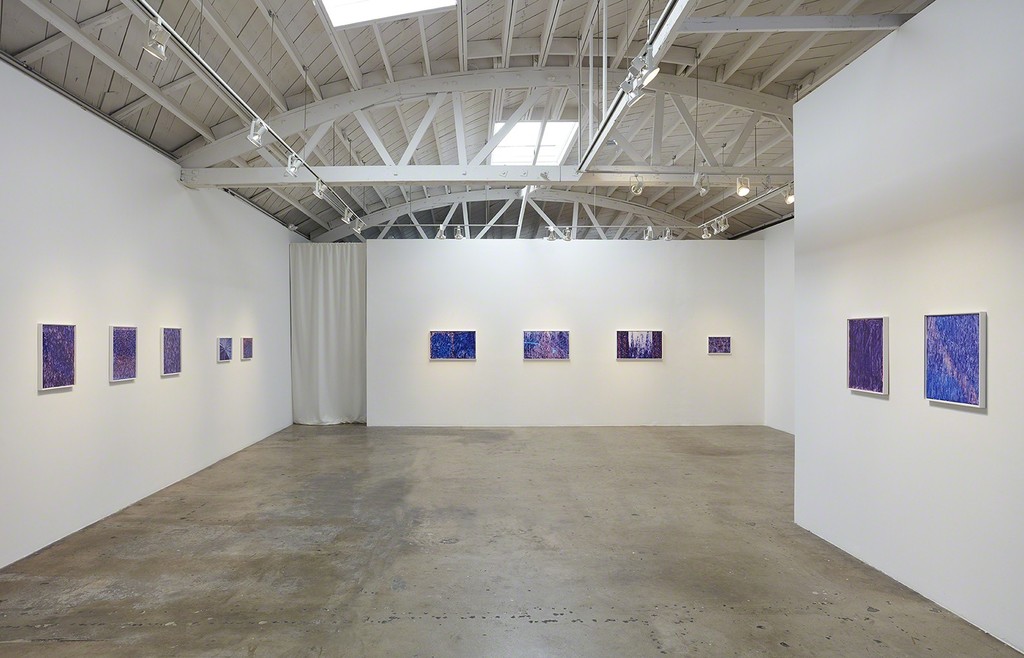 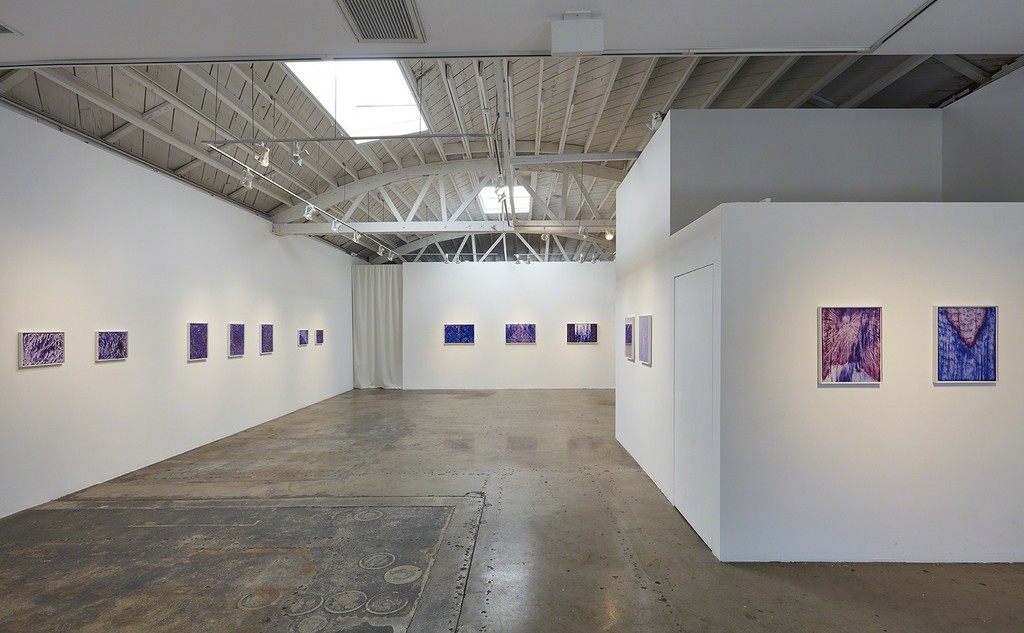 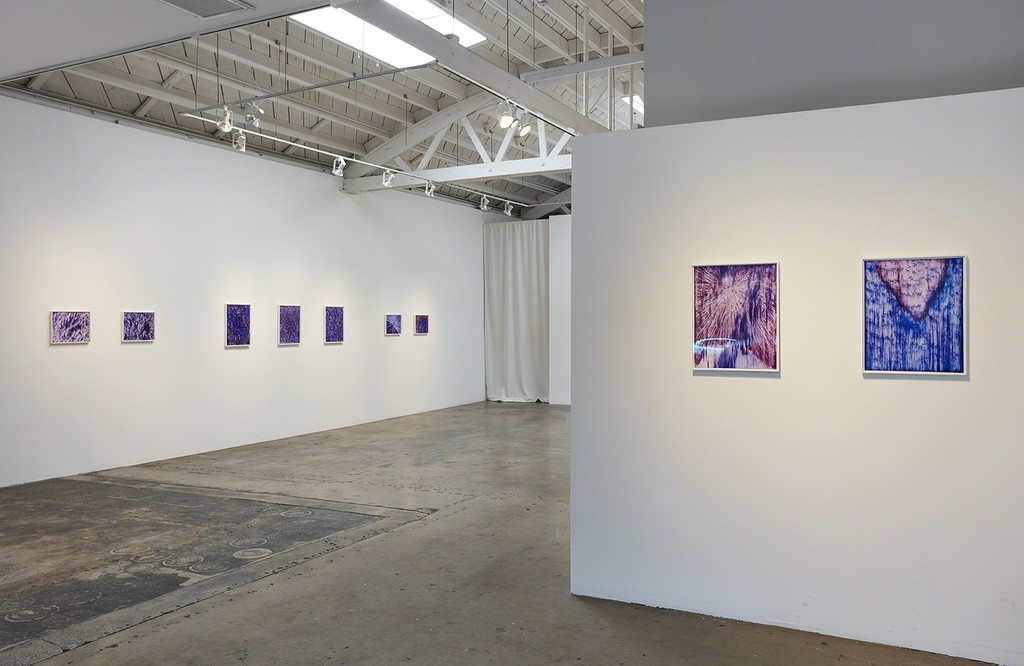 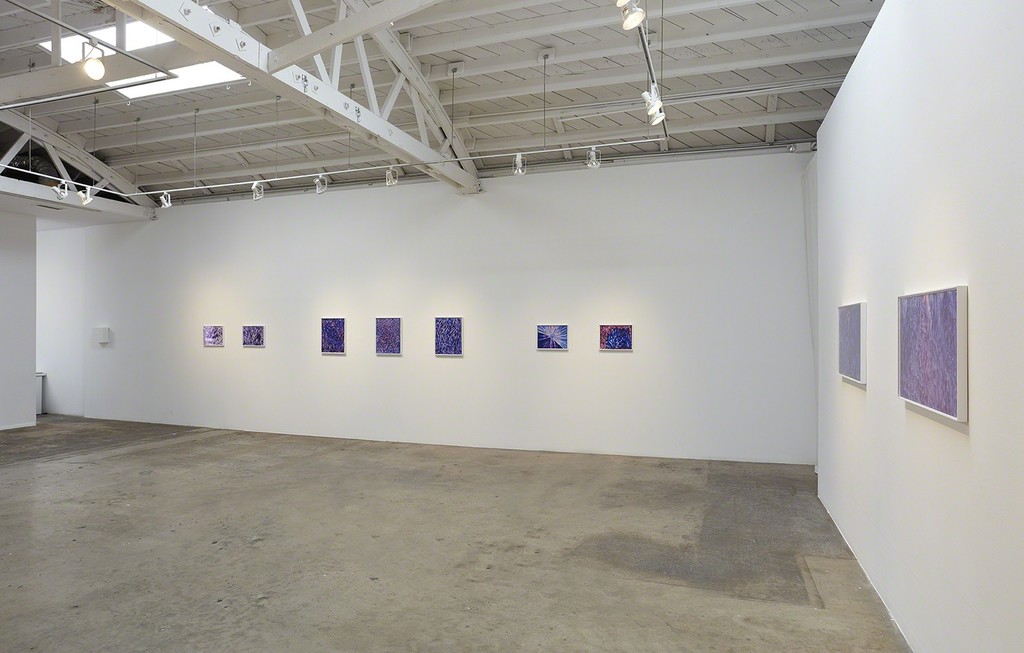 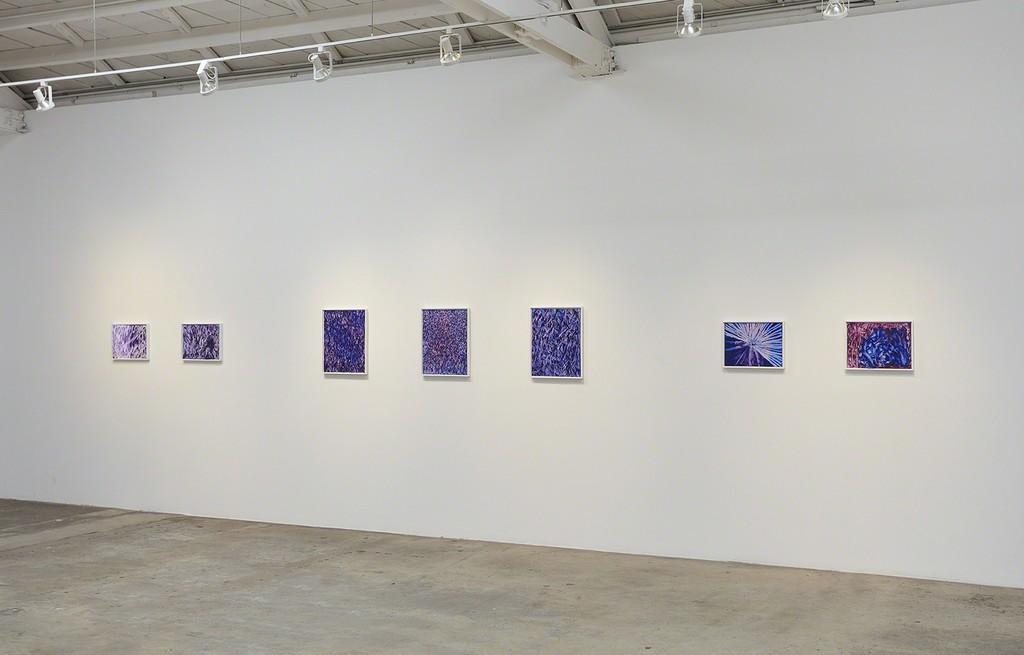 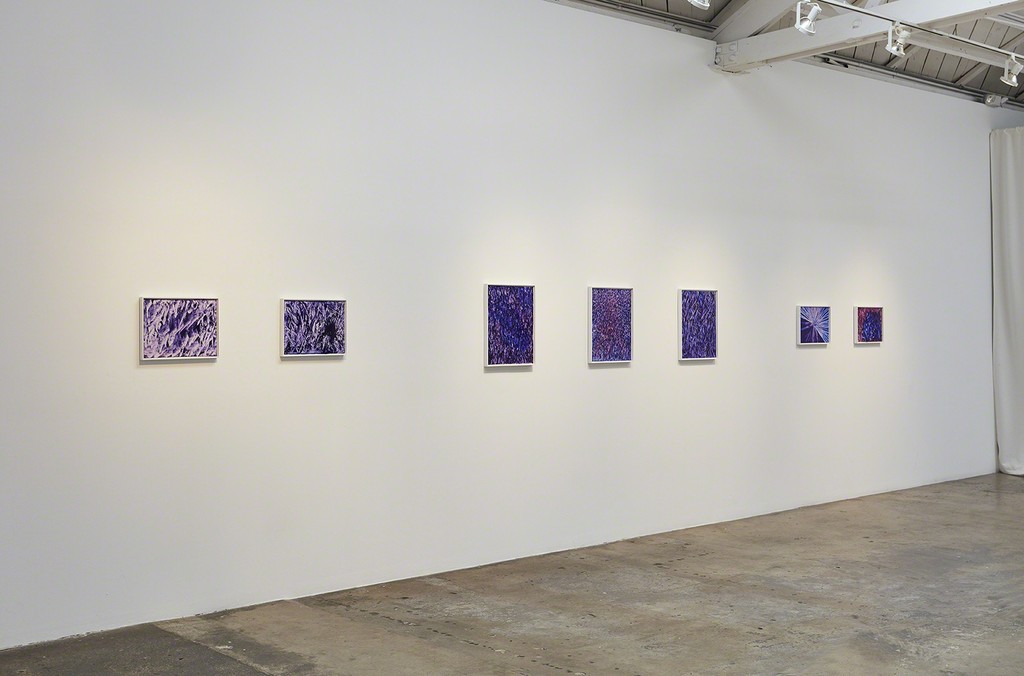 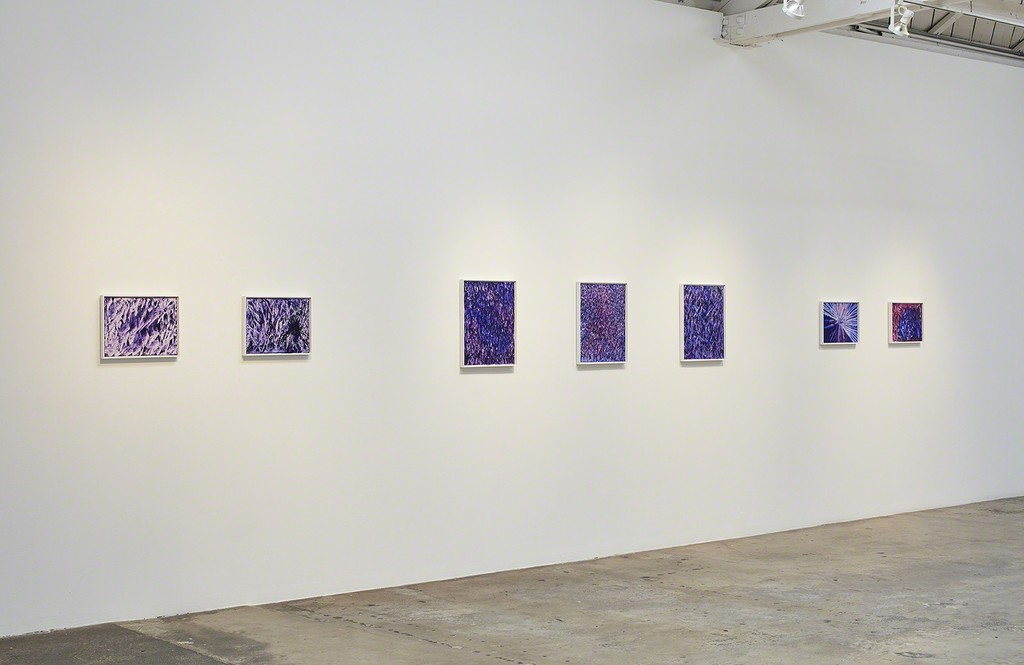 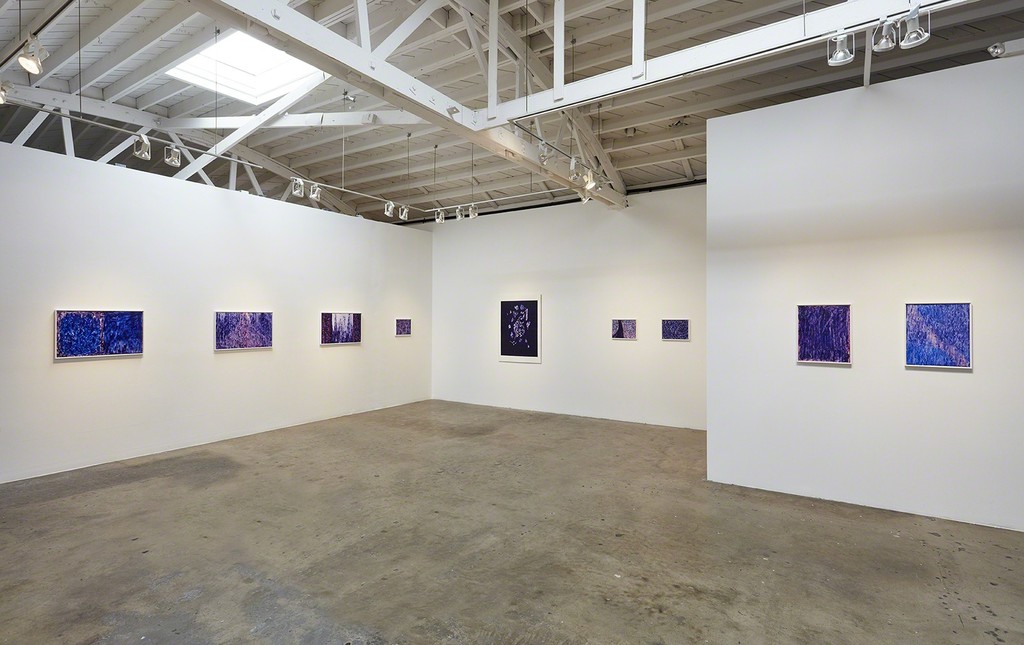 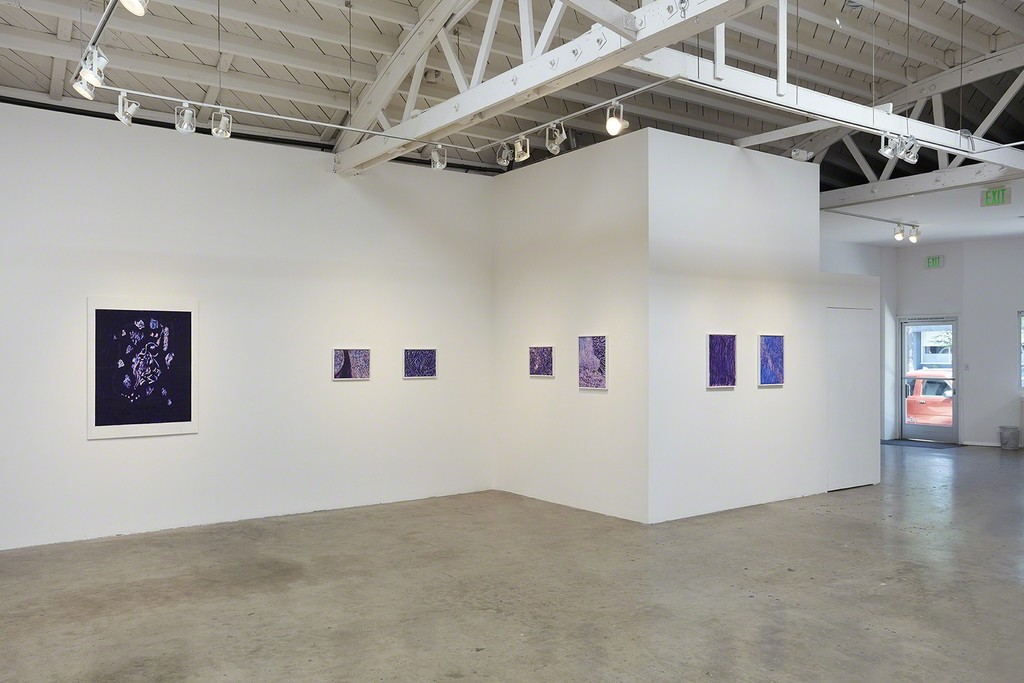 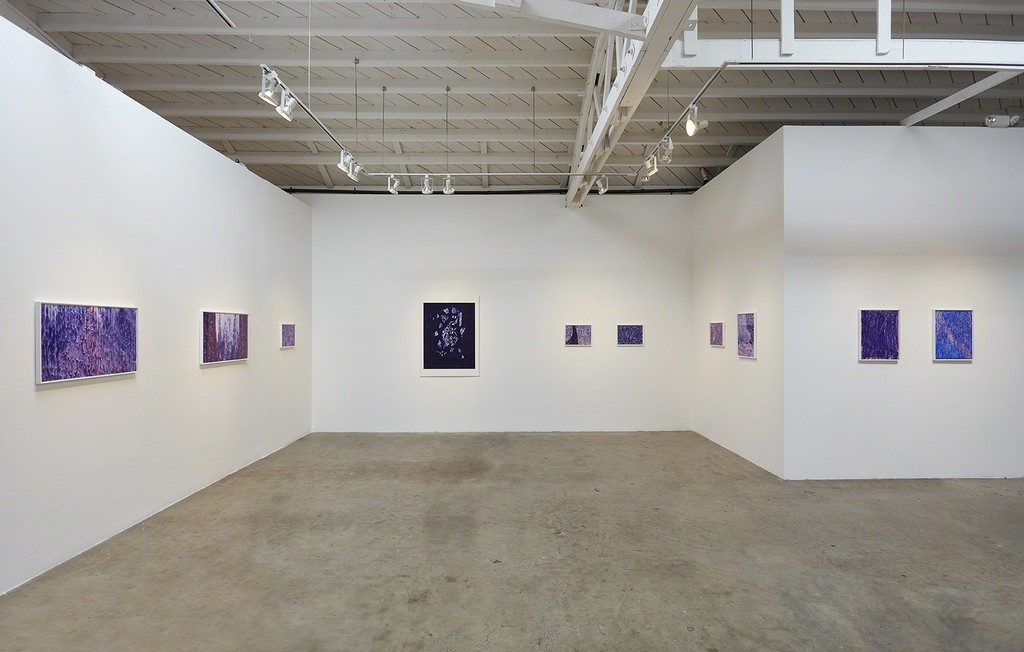 KLOWDEN MANN is proud to present First Paintings, our second solo show with Los Angeles-based artist L.E. Kim. The show will consist of framed oil paintings on palette paper, and will be on view from July 23rd through August 20th, 2016, with an opening reception for the artist Saturday, July 23rd, from 6-8pm.

Using shades of ultramarine blue, violet, and rose, Kim paints by placing and scraping oil pigments on palette paper with a palette knife, and then continuing to add and remove color repeatedly; some areas are scraped down to the surface of a worked and exhausted paper with just the remnants of color remaining, where others are built up to a high level of texture and dimension.

Despite the physical and gestural execution of these abstract works, the finished form presents in a way that confuses our expectations about medium. These are oil paintings that feel at first like photographs taken of textured surfaces, or manipulated digital images.

Kim’s past work has often walked a similar line between the expression of digital and physical experiences of seeing. Her early works in video used the medium to explore abstract sensations of time, form, and emotion: constellations being removed one by one in a progression of the night sky, a slideshow of 77 slides that she ran through a sewing machine and then projected, with light creating burned form through film that was no longer there. Likewise, past bodies of static work have also traced the physical hand across the digital realm, and vice versa; large digital prints in which she removed pixels one by one from scans of light; small, highly reduced geometric paper forms in dense digitally printed black ink sewn together by hand and floated without context.

Here again, Kim plays on the experience of sight and sensation as it exists across these now-intertwined ways of being. Ultramarine as a color has a history of preciousness, sacredness even. Before its synthetic version was introduced in the mid-1800’s, it was the most expensive of pigments—made from ground lapis lazuli and therefore often used to indicate significance, such as in the robes of queens or of the Virgin Mary. In the present day, one might argue that the color instead invokes the cool blue light spectrum emitted from the screens we now use to navigate and experience the world.

And yet, Kim’s paintings are resolutely tangible, somatic. Functioning consciously across this battle over embodiment, Kim does so without taking sides. She offers instead both the blue light we are now conditioned to seek, and evidence of the human hand as present and engaged in a process of visible making. Both are presented as valid, comforting even. The works bring us out of the embattled conscious space, and instead invite meditation on physical rhythmic movement and a sense of embodied sound in paint. That they are, truly, Kim’s “First Paintings”, makes the invitation feel that much more genuine.

L.E. Kim was born in Seoul, Korea, and lives and works in Los Angeles. She received her M.F.A from the California Institute of the Arts in 2009, and has exhibited at Klowden Mann and in group exhibitions in Los Angeles and New York.

In conjunction with First Paintings, L.E. Kim has organized a show of video works with artist Brica Wilcox. QUEUE is a collection of digital “slide shows” by 15 artists, each work an exploration of the maker’s own artistic concerns. In their techniques and source materials, these videos traverse the history of photography, film, and video, as well as crisscross the fine line between the still and moving image.

Brica Wilcox is an artist based in Los Angeles. She received her M.F.A. from CalArts in Photo and Media. She is part of the artist collective D3: Deliver, Document, Destroy and a member of X-TRA’s editorial board.