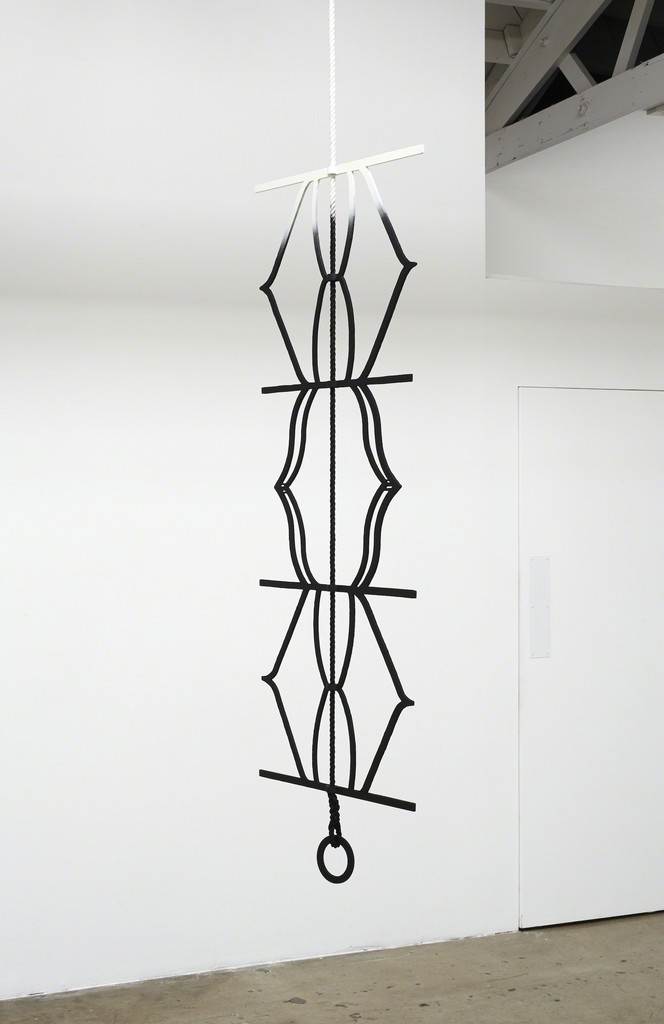 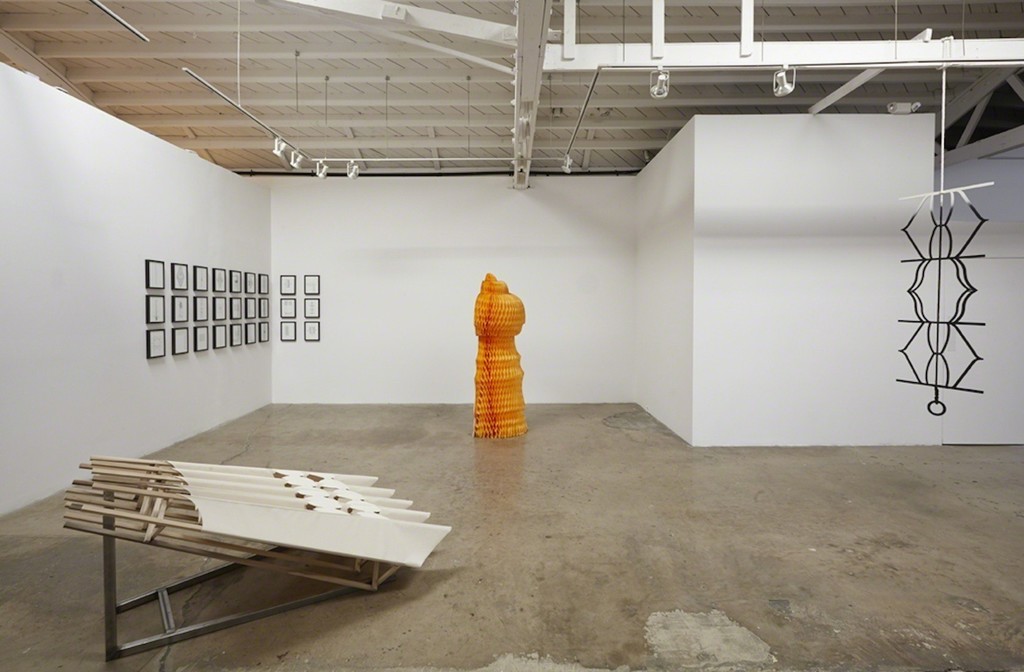 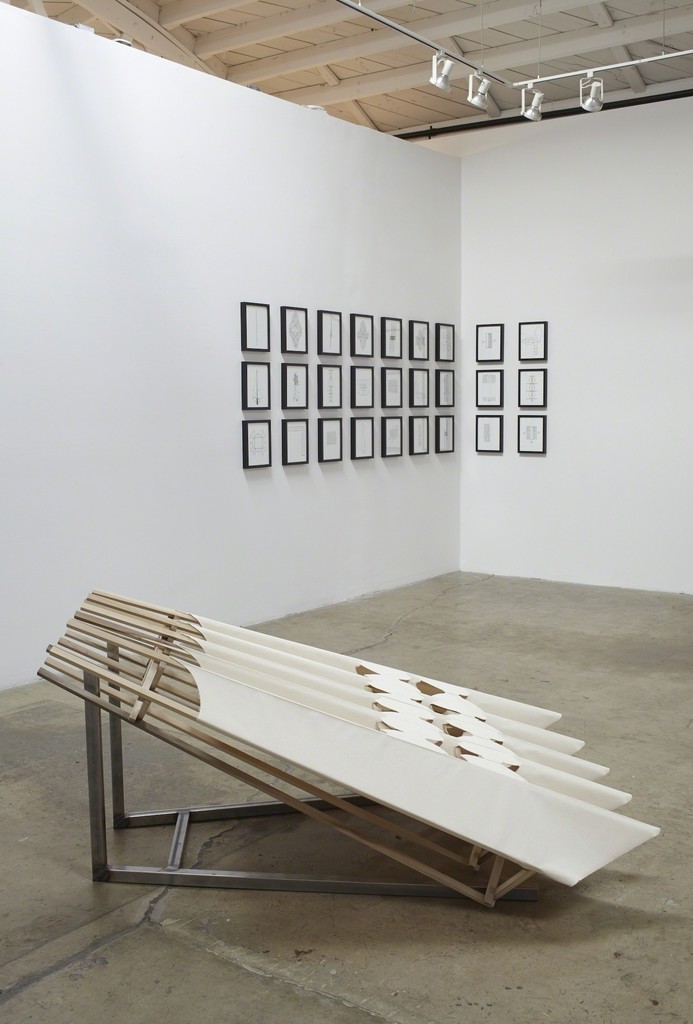 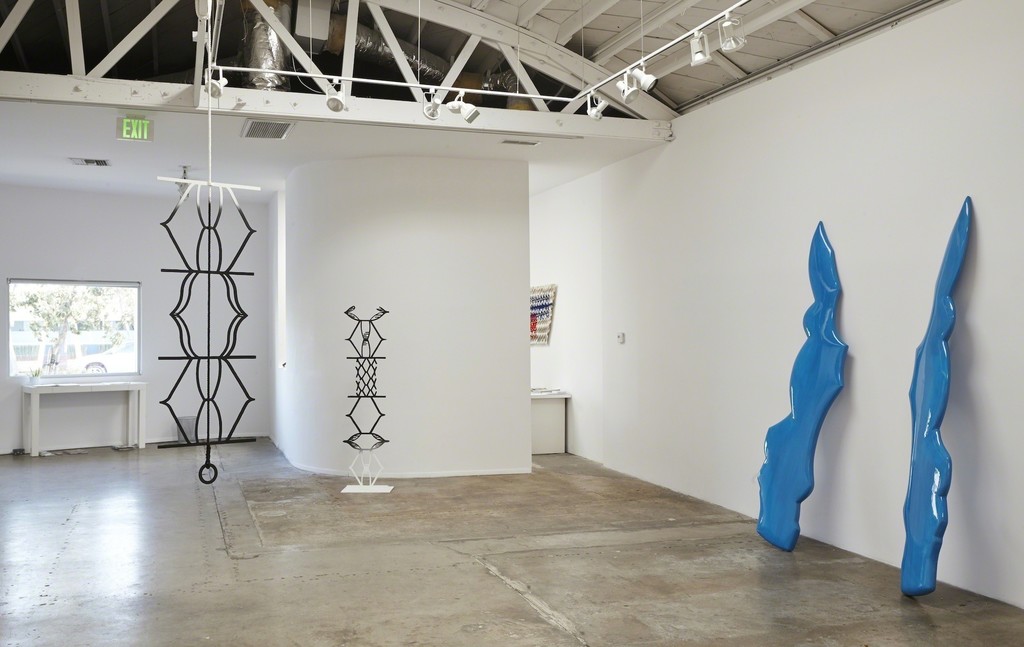 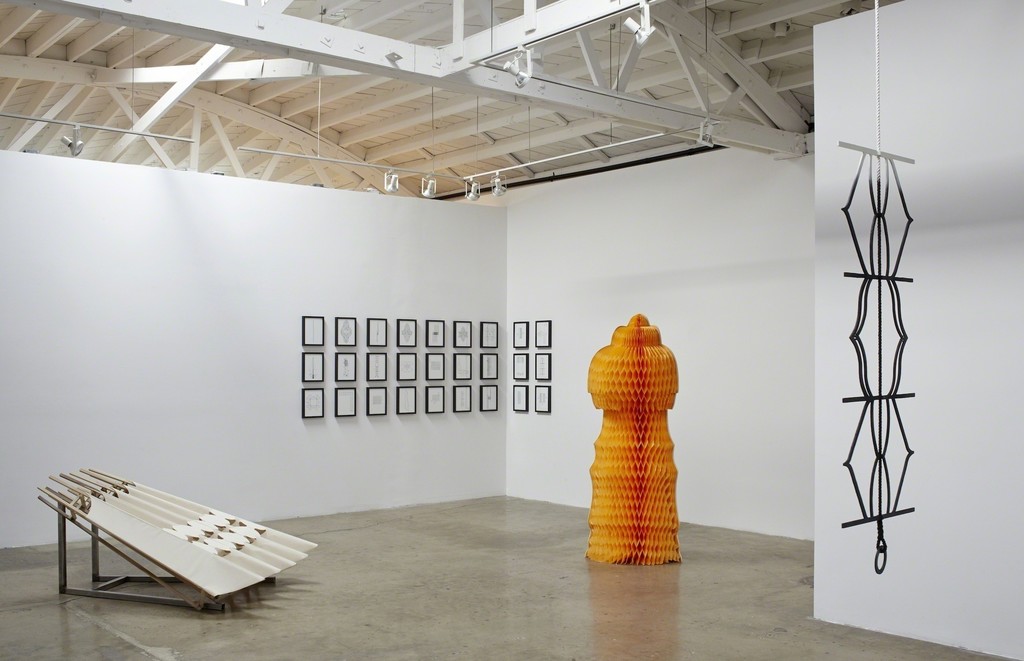 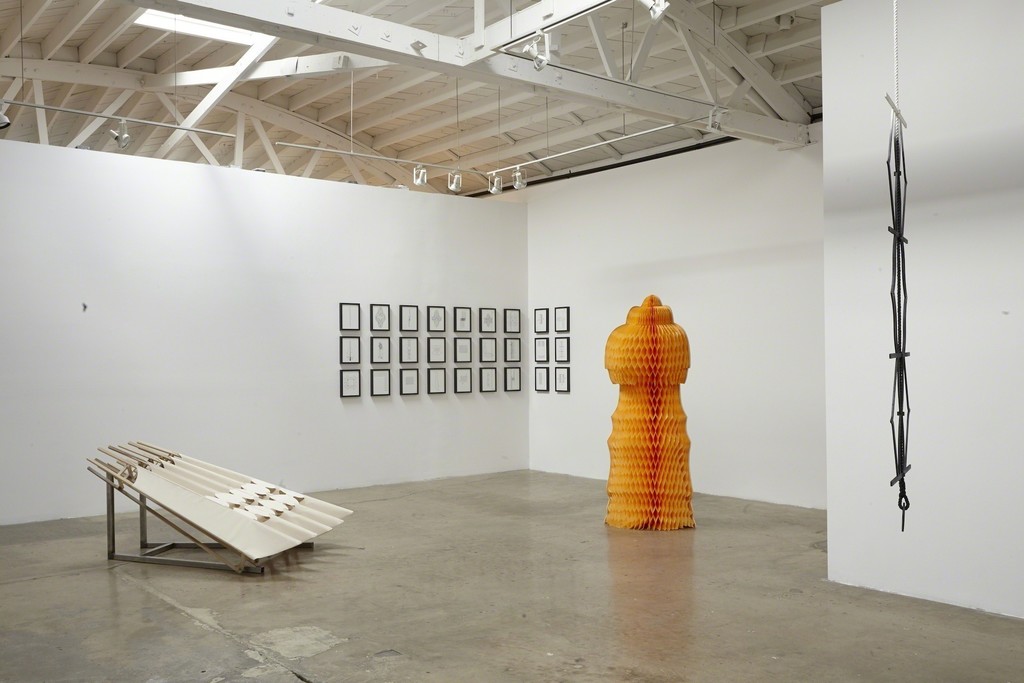 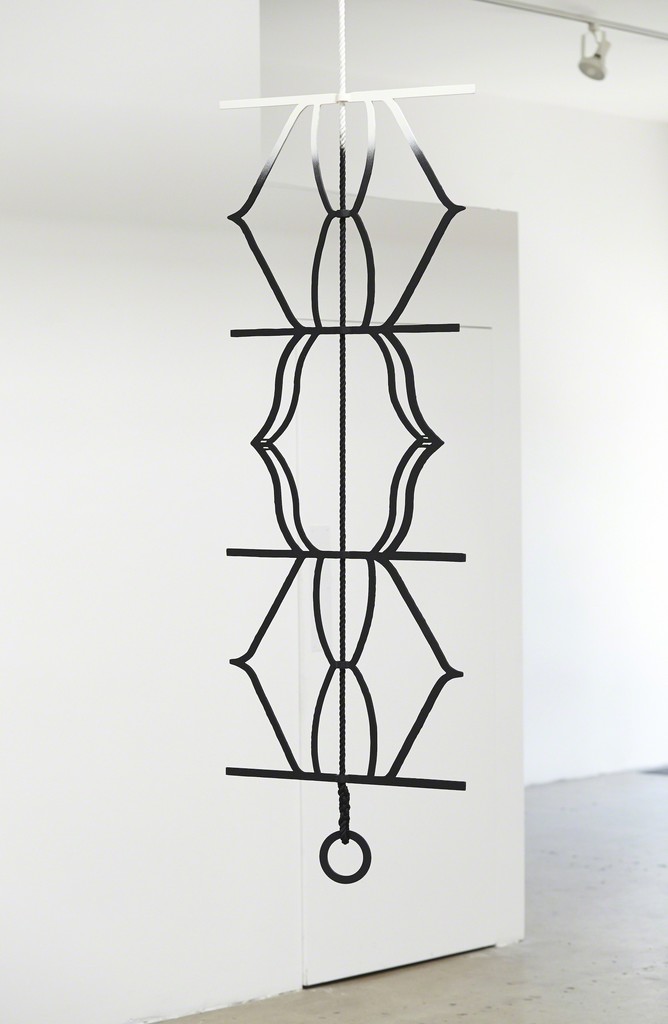 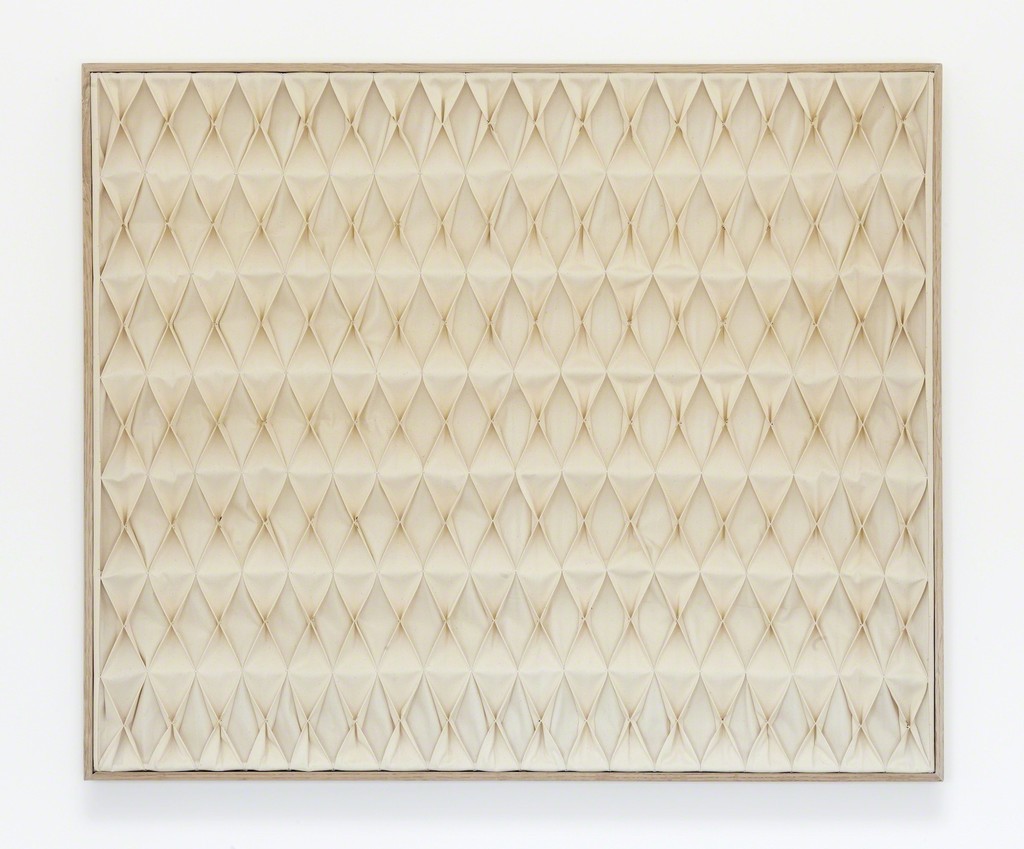 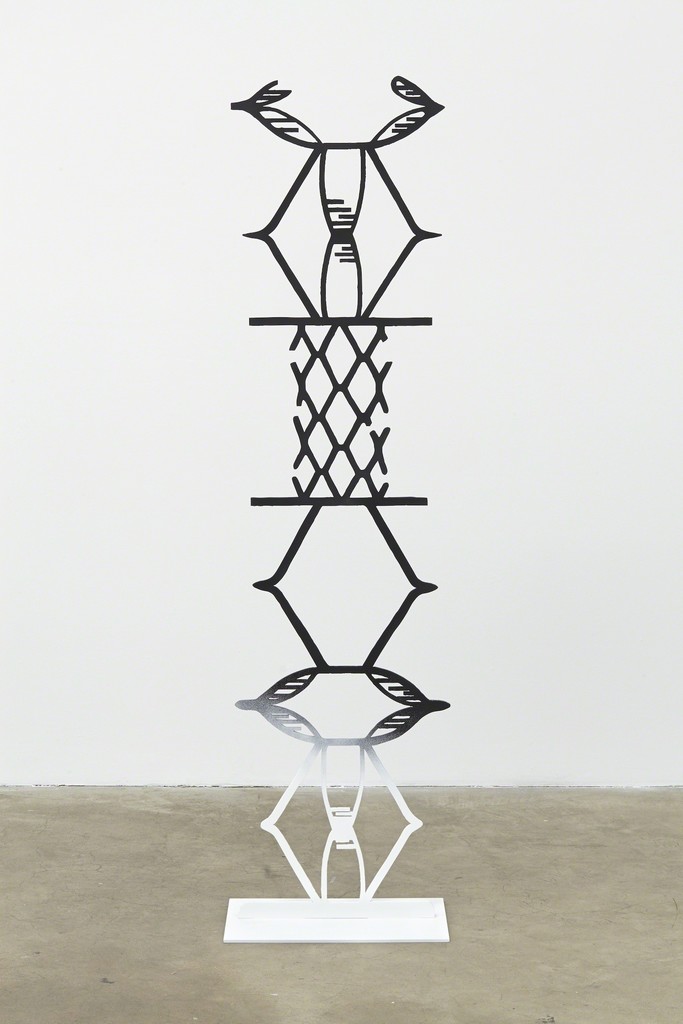 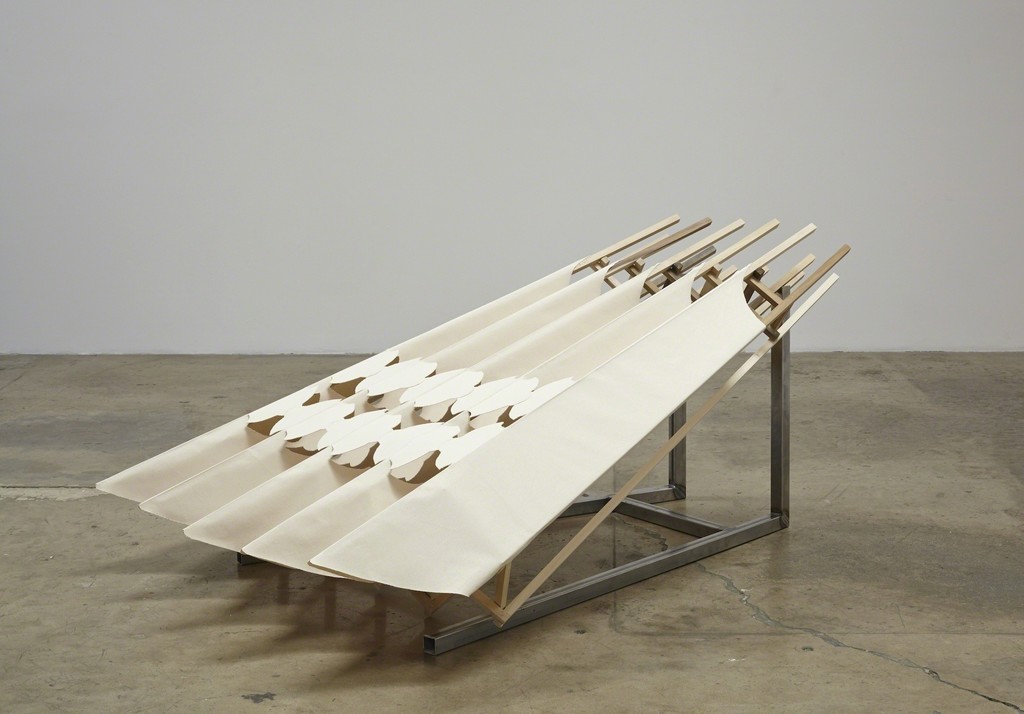 Klowden Mann is very pleased to present I love you Helen, the gallery’s first solo exhibition of works by Los Angeles-based artist Megan Cotts. The exhibition features three dimensional pieces constructed of varying materials including canvas, wood, aluminum, steel, rope, foam and epoxy, as well as a series of 27 small scale silkscreen prints. Based upon a series of patent drawings for honeycomb paper that originated in Cotts’ family in late 19th century Germany, the work in the exhibition approaches issues of labor, intellectual property, and the translation of family history through machinery and artifact into a process that re-embodies that history in the present. In conjunction with the exhibition, the gallery project space will also present a video piece by D3, an artist run service by Megan Cotts, Ali Prosch and Brica Wilcox, dealing in object divestment. The exhibition will run from March 15th through April 19th, with a reception for the artists on Saturday March 15th from six to eight in the evening.

The starting point for this body of work began in 2011, when Cotts sat down with her father's family scrapbooks from his parents' and grandparents' personal documentation of their lives in early 20th century Germany. In 1899, Cotts' great-great grandfather, Samuel Pinner, along with his partner Hans Heilbrun, filed the first patent for honeycomb paper technology. Soon afterwards, they opened a factory in the town of Halle, Germany producing honeycomb paper objects, with a popularity that then expanded the company to offices in Berlin, Paris, New York, and London. They continued operating their original factory until 1938 when, as Jews, their patents were nullified and the factory was taken over the Nazi party. The family left and moved to the United States, but the technology they had formed had expanded into multiple industries. Their original machines, which they had used to create decorative objects prized in middle-class households of the new increasingly disposable economy, were also being used to form identical structures in different materials for the airplane industry, including the construction of German bomber planes and the then-budding airplane industry in Los Angeles. The technology has since expanded into multiple areas, and continues to be used both in its original paper form and in the contemporary incarnation of the aviation and aeorospace industries.
The body of work in I love you Helen is based upon the individual patents that were once held by Cotts' family, with the series of silkscreens presenting a direct representation of patent drawings—a kind of building block language for the work as a whole—and the sculptures offering Cotts' reinterpretation of those forms in larger scale. The pieces speak to the direct process of translation at work in the original honeycomb product, working through machinery to move from two dimensions to three dimensions. Cotts' sculptures also often combine the handmade and the fabricated, in a way that focuses on the space where the two meet, and where they diverge. The physical reinterpretation of objects with both familial and historic potency offers a spacial consideration of family history as inextricably tied to politics, labor, technology and geography, while maintaining a grounding based upon the nearly-universal experience of family history imparted through personal objects.

Megan Cotts was born in New York, NY in 1979, and received her MFA from California Institute of the Arts in 2009. She has exhibited her solo work at Dan Graham and Compact Space in Los Angeles, Junior Projects and AIR Gallery in New York, TSA in Brooklyn, I-A-M Gallery and Atelierhof Kreuzberg in Berlin, Germany, and SIA Gallery in Sheffield, England, as well as exhibiting at fairs with Klowden Mann in San Francisco and Miami. She has participated in the Terra Summer Residency in Giverny, France, the Vermont Studio Center, the GlogauAIR Artist in Resicence Program in Berlin, Germany and the I-A-M Artist in Residence Program in Berlin, Germany. Cotts has also performed and exhibited with D3 at Machine Project and Human Resources in Los Angels, CCS Gallery at UC Santa Barbara, and Central Trak Gallery in Dallas. Concurrent with the exhibition, Cotts’ work can be seen in the inaugural group show of Junior Projects in New York.