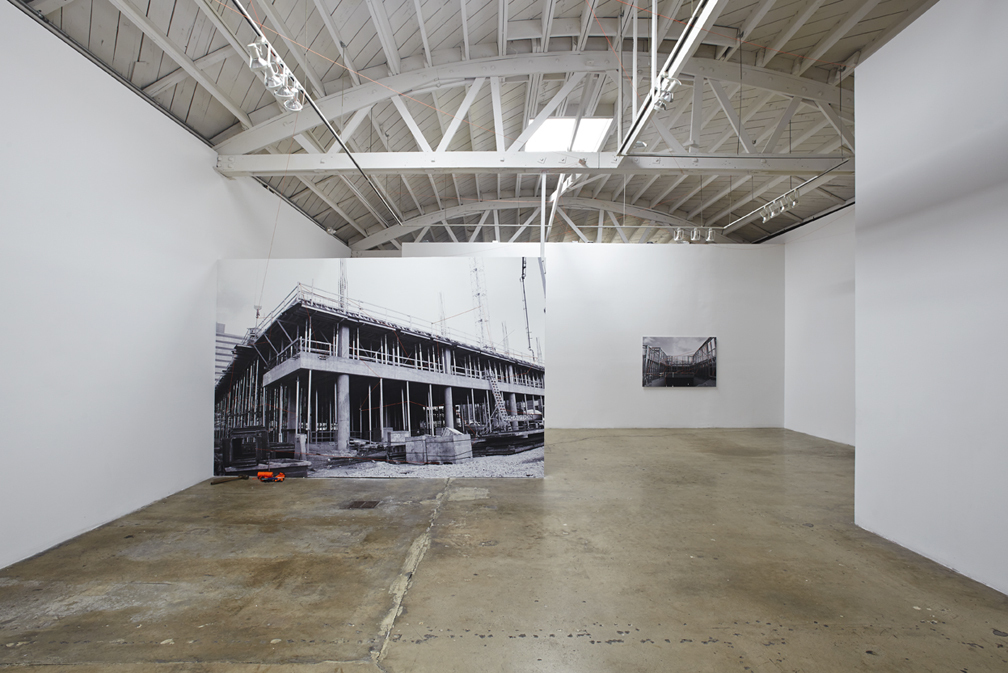 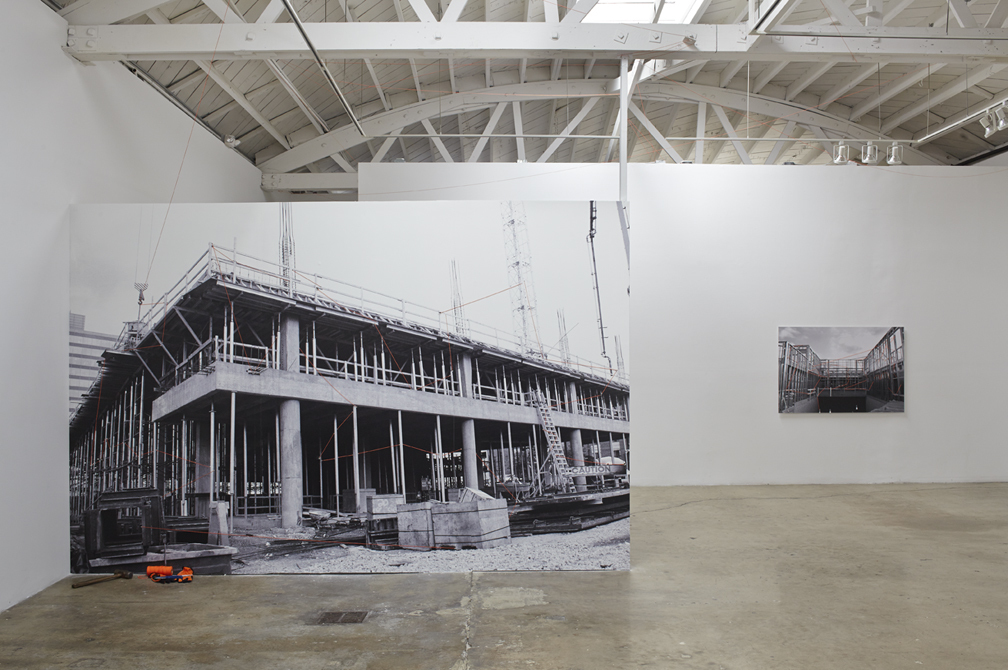 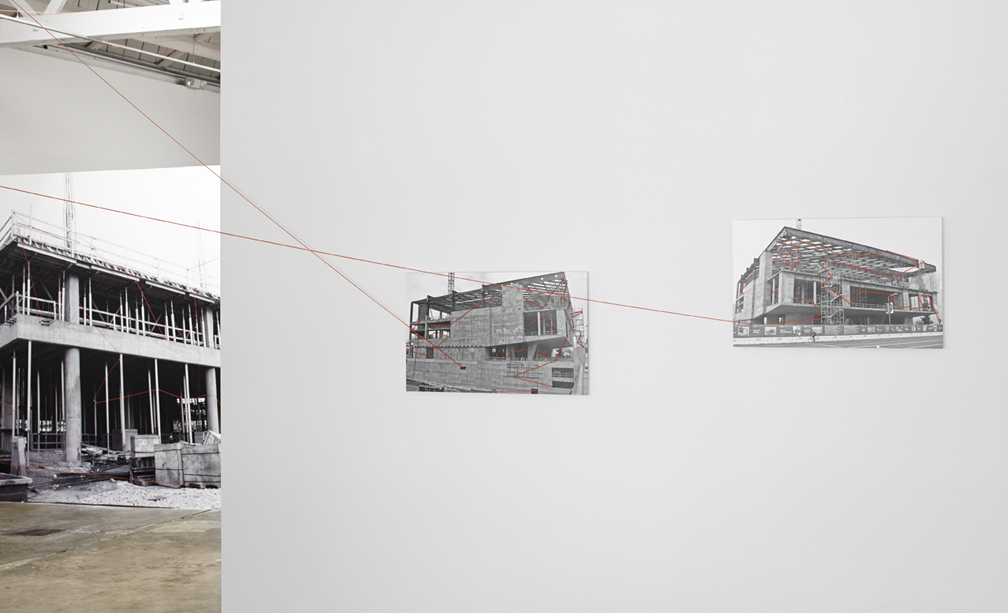 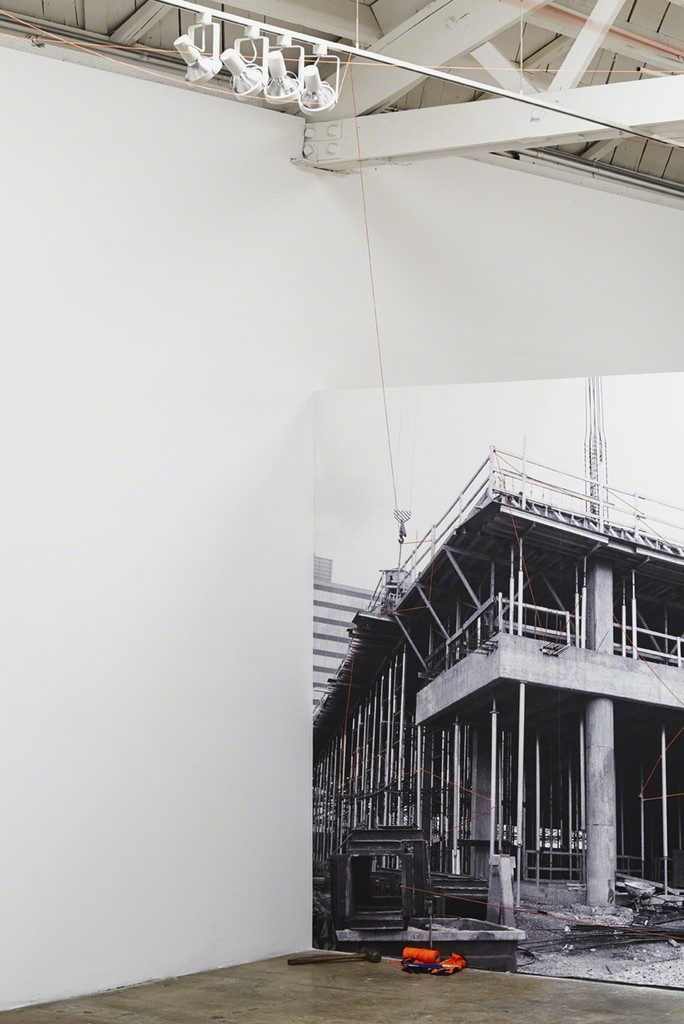 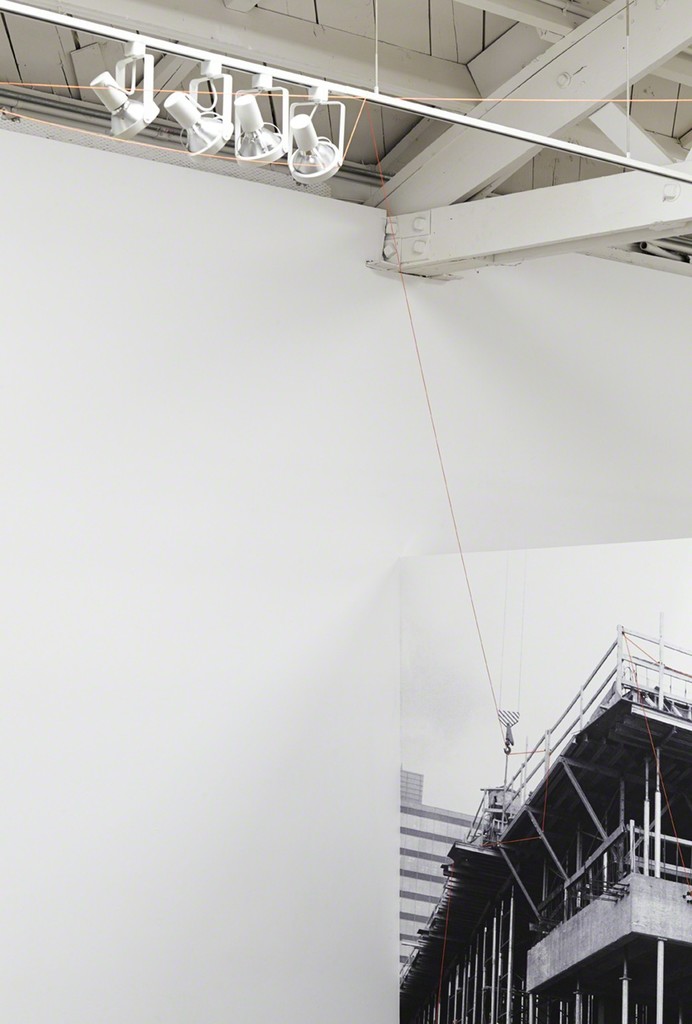 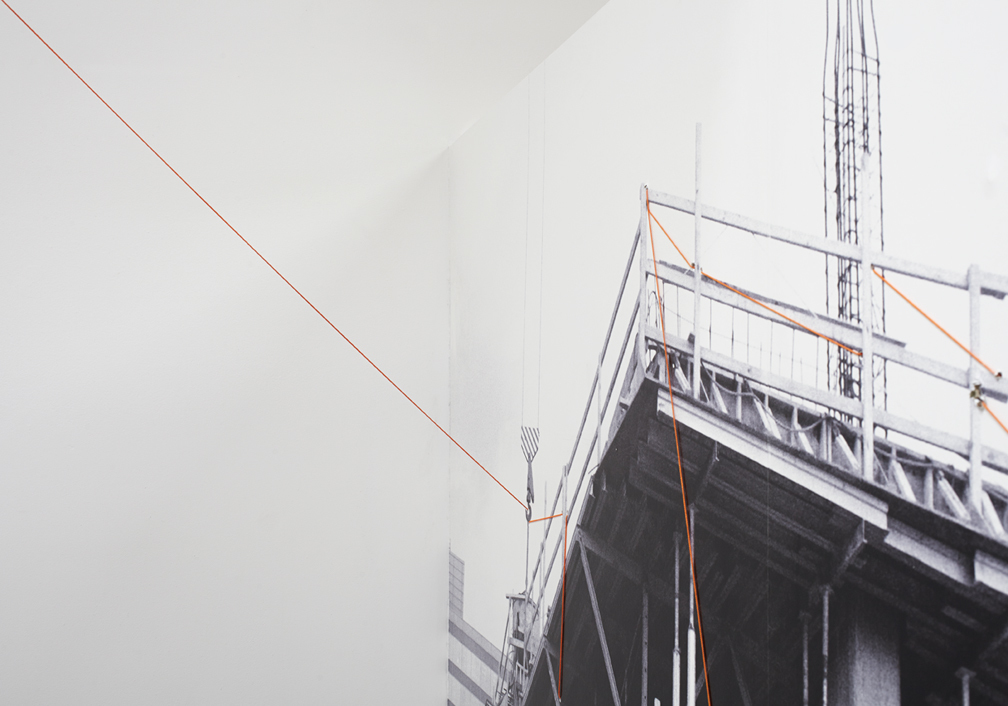 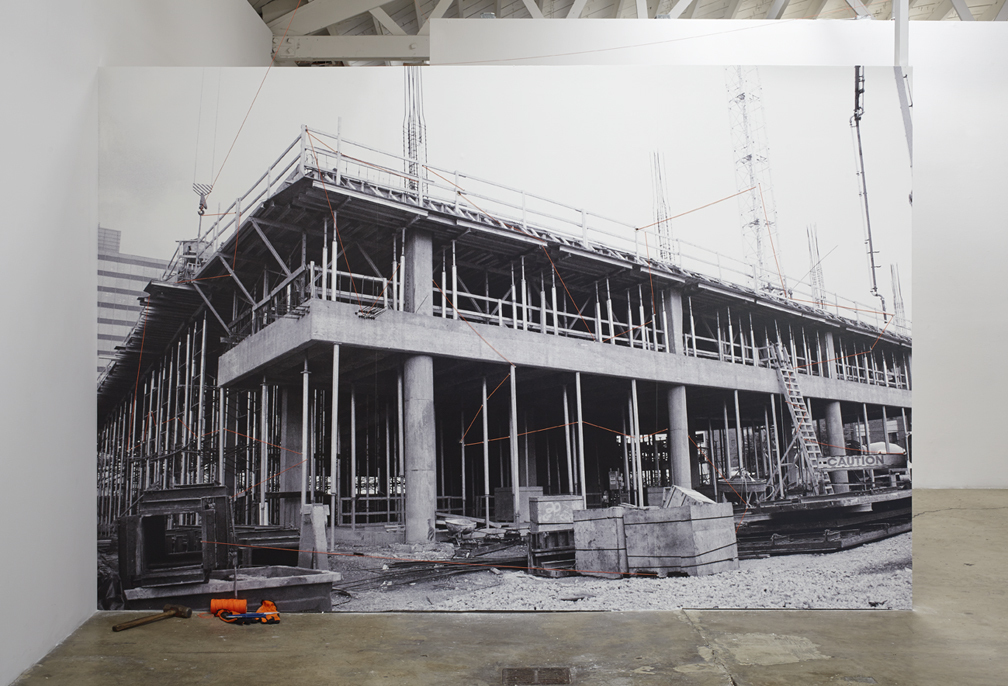 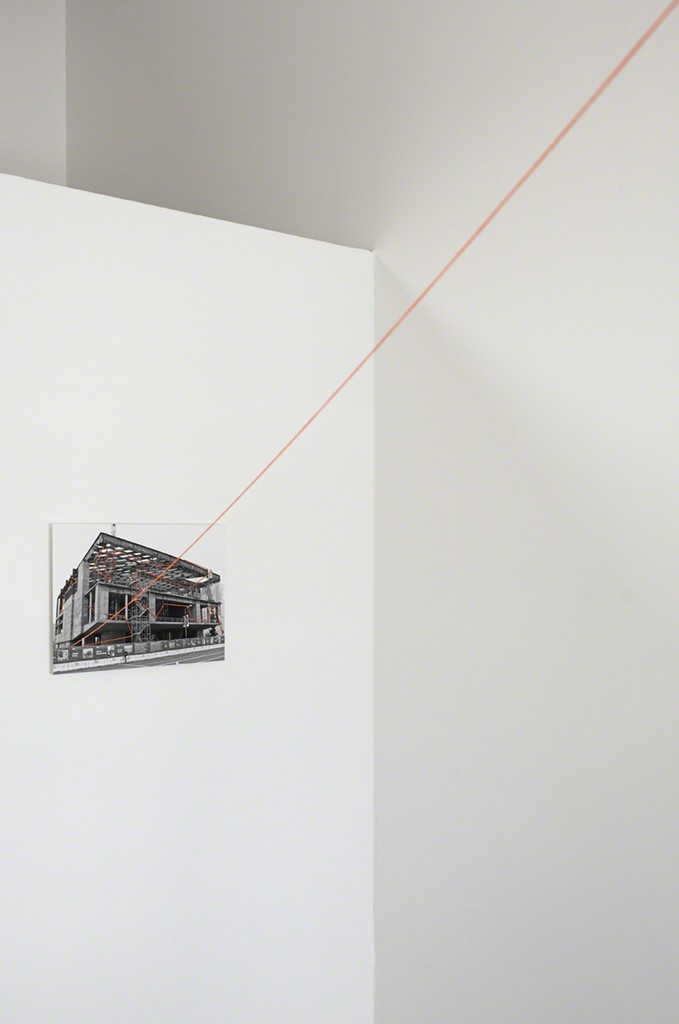 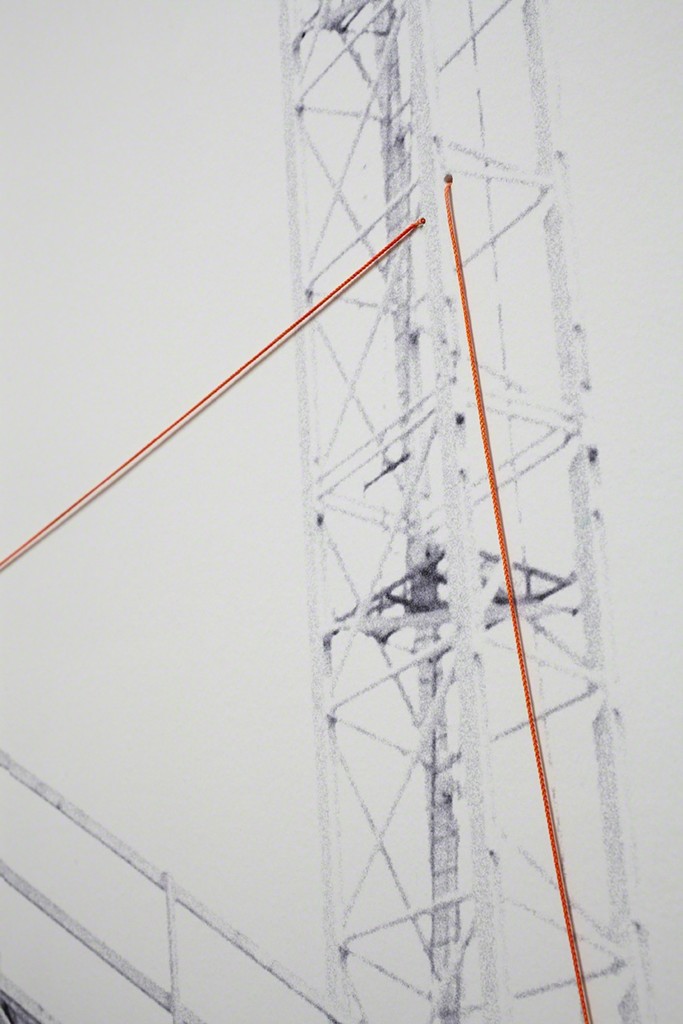 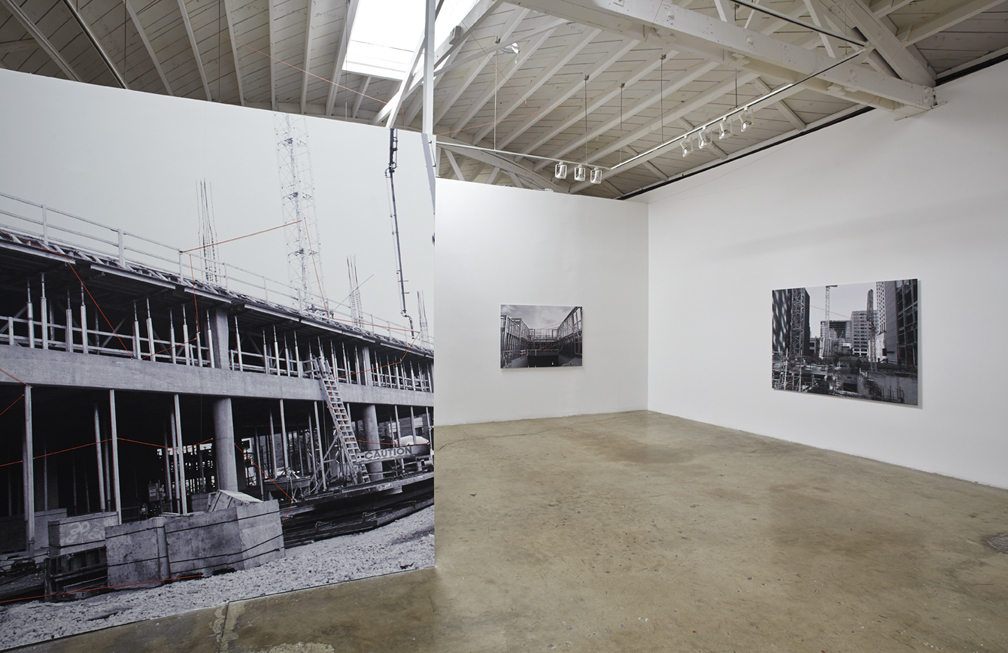 Klowden Mann is proud to present our first solo show featuring exhibition, performance, and intervention in the commercial gallery setting by Los Angeles-based artist Nancy Popp. The exhibition will include large-scale photographic prints of a selection of Popp’s performance sites in the main gallery space, one adhered as a mural to a wall built specifically for the exhibition, and others mounted on plexi-glass, perforated, and strung through with orange mason line that is then interwoven into the existing gallery architecture. The opening reception on June 28th from 6-8pm will include a performance by Popp in which she will drill in and perforate the built-out gallery wall and mural, performing the process of mason line intervention in front of the reception attendees. The gallery project space will exhibit photographic and video documentation of select previous performances. The exhibition will run from June 28th through August 9th, with a closing performance on August 9th in which Popp will physically deconstruct the mural wall featured in the opening performance.

Nancy Popp is a Los Angeles-based educator and multi-disciplinary artist. Her performances, videos, drawings, and photographs draw upon the rich traditions of durational, corporeal performance and political intervention to explore relations between body and site, incorporating public and architectural spaces. Collaboration is a long-term strategy she employs in her practice. She has exhibited at such venues as the 2014 Dallas Biennial, 2011 Istanbul Biennial, Turkey; the Manifesta 9 Biennial, Belgium; the Getty Center, Los Angeles; Atlanta Contemporary Arts Center; Rowan University, New Jersey; SUNY University, New York, numerous galleries in Los Angeles including a recent solo show at Monte Vista Projects, Düsseldorf, Belgrade, and Tijuana, and many other public sites and institutions. She holds degrees from Art Center College of Design, Pasadena and the San Francisco Art Institute, and is a recipient of the California Community Foundation’s Visual Arts Fellowship and a Lucas Artist Fellowship from the Montalvo Arts Center.