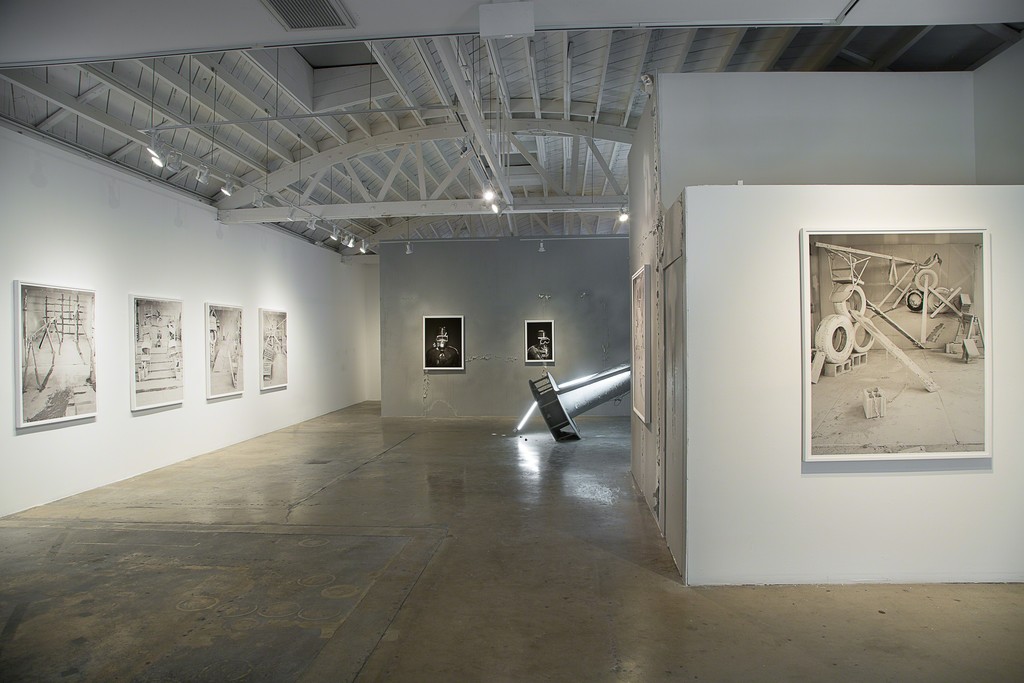 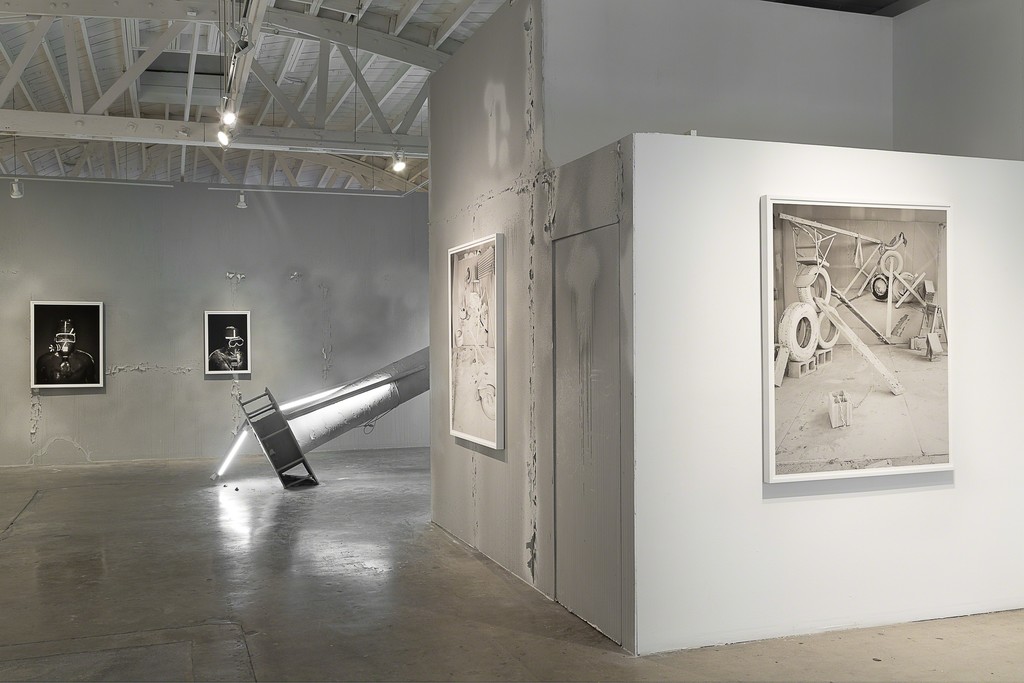 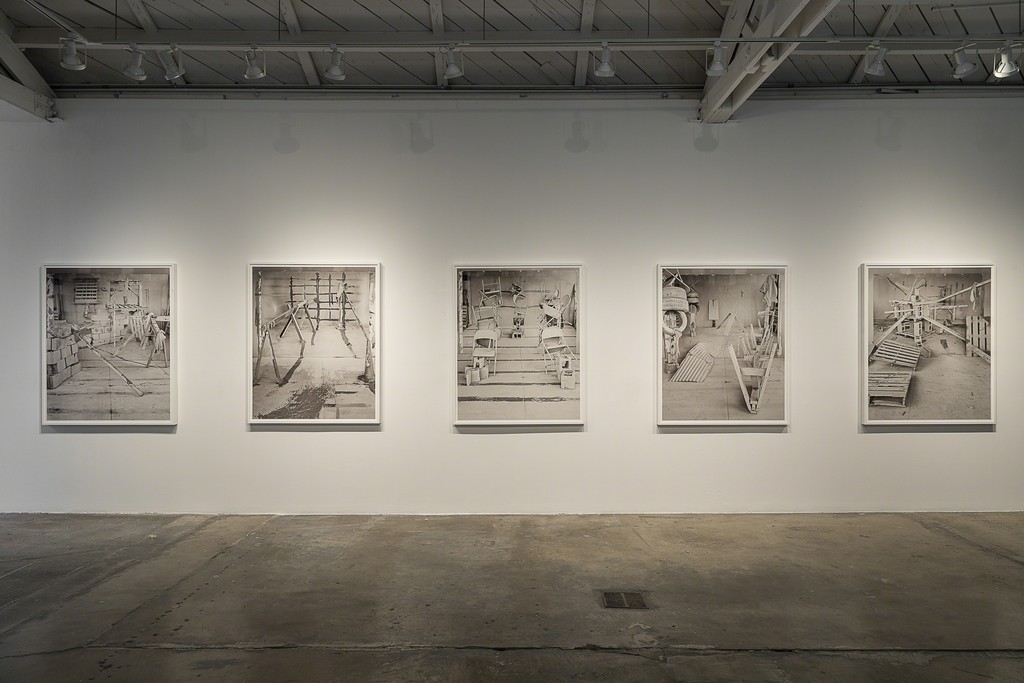 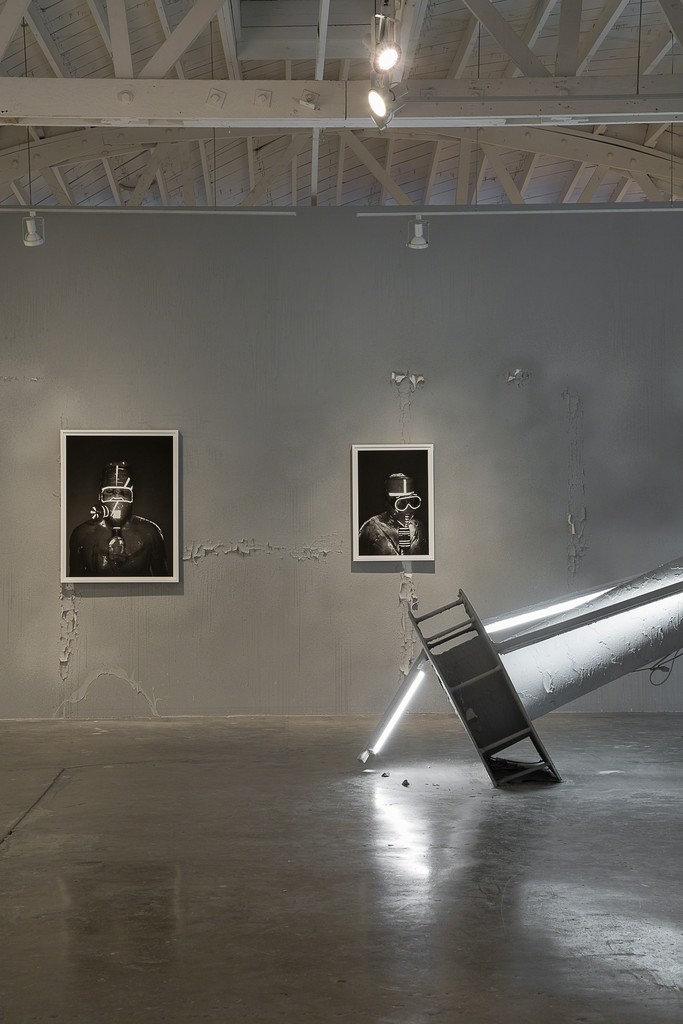 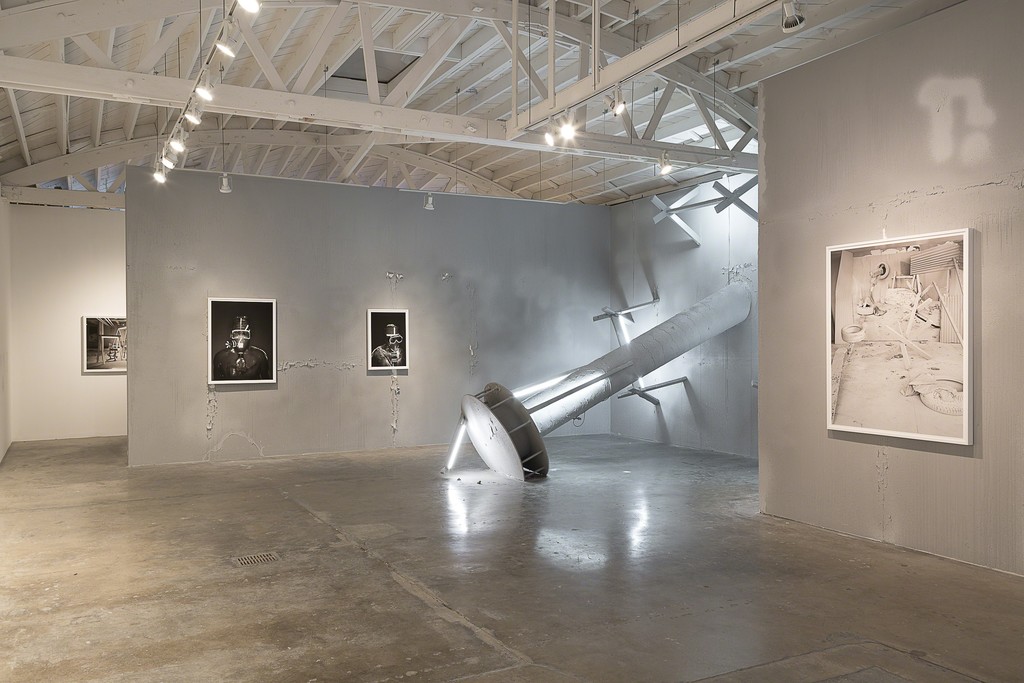 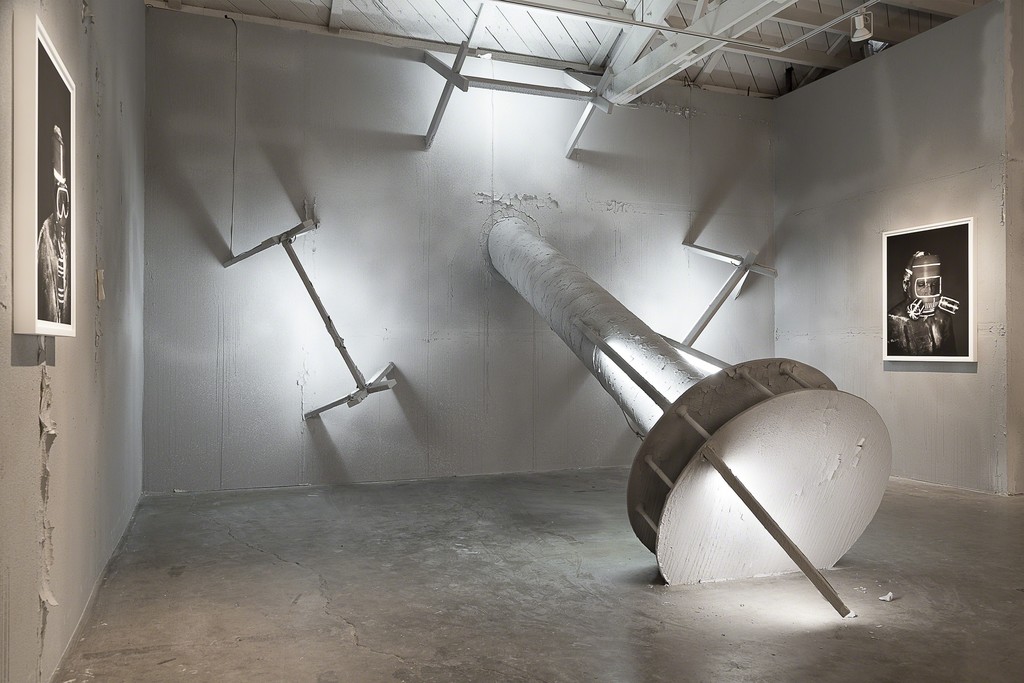 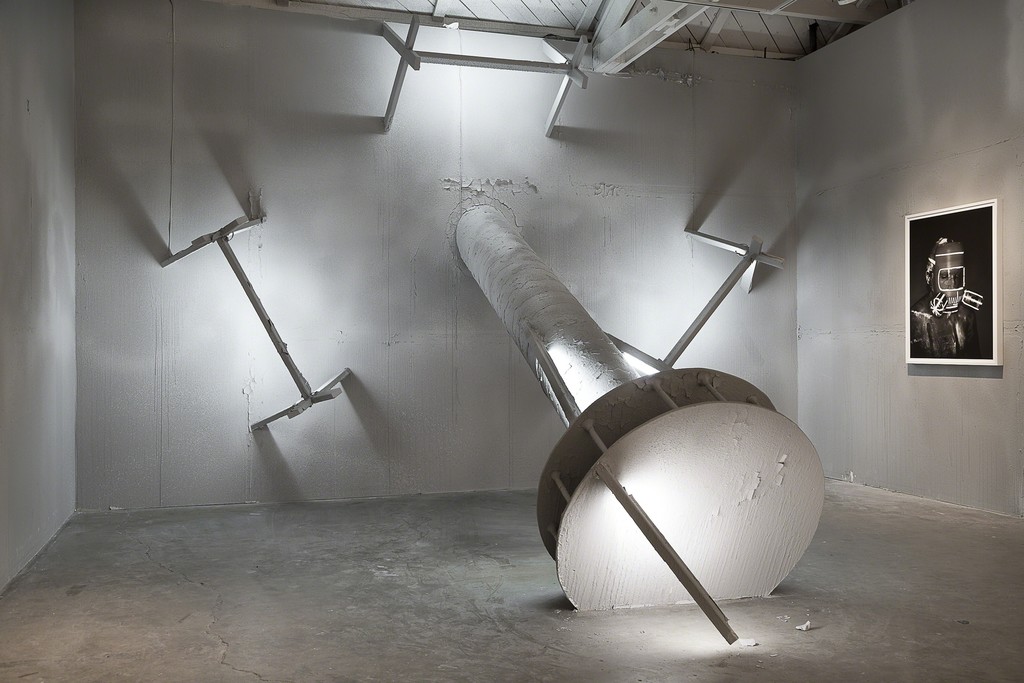 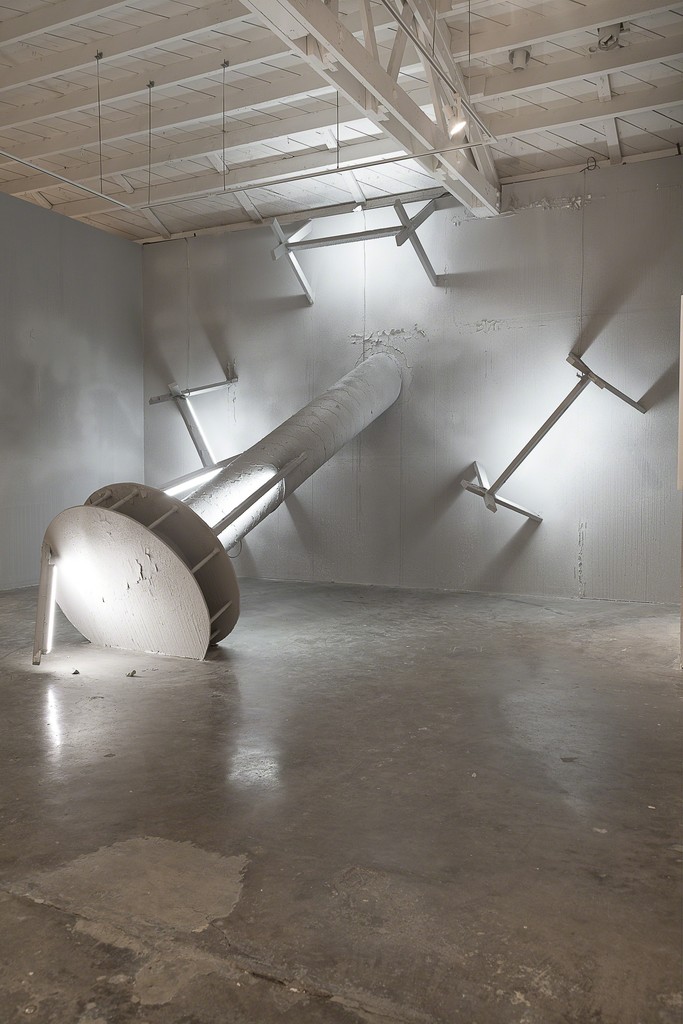 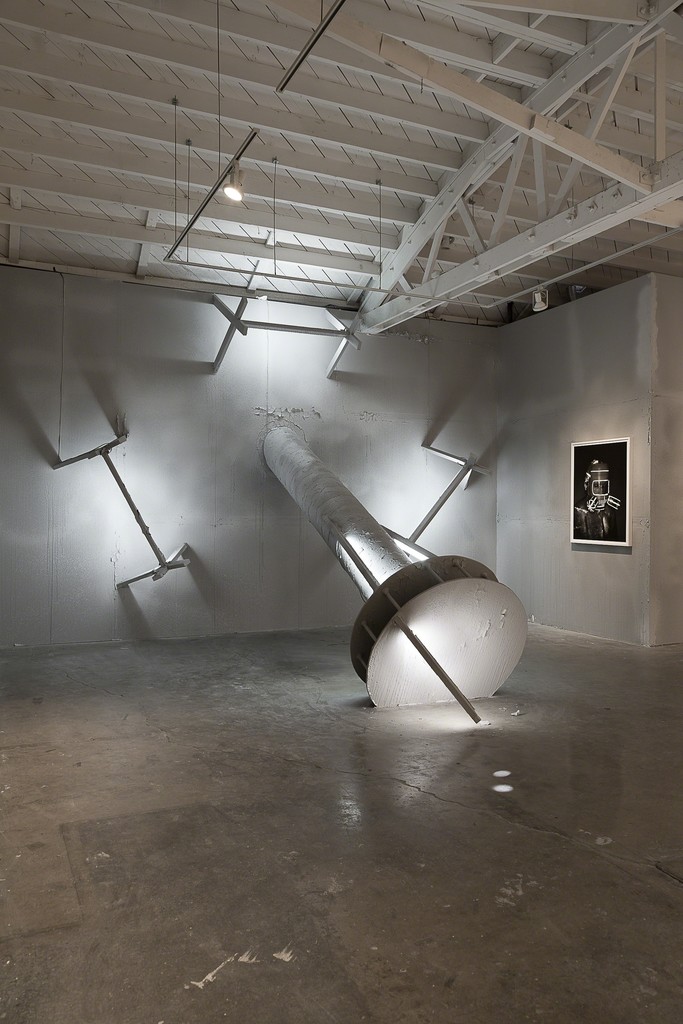 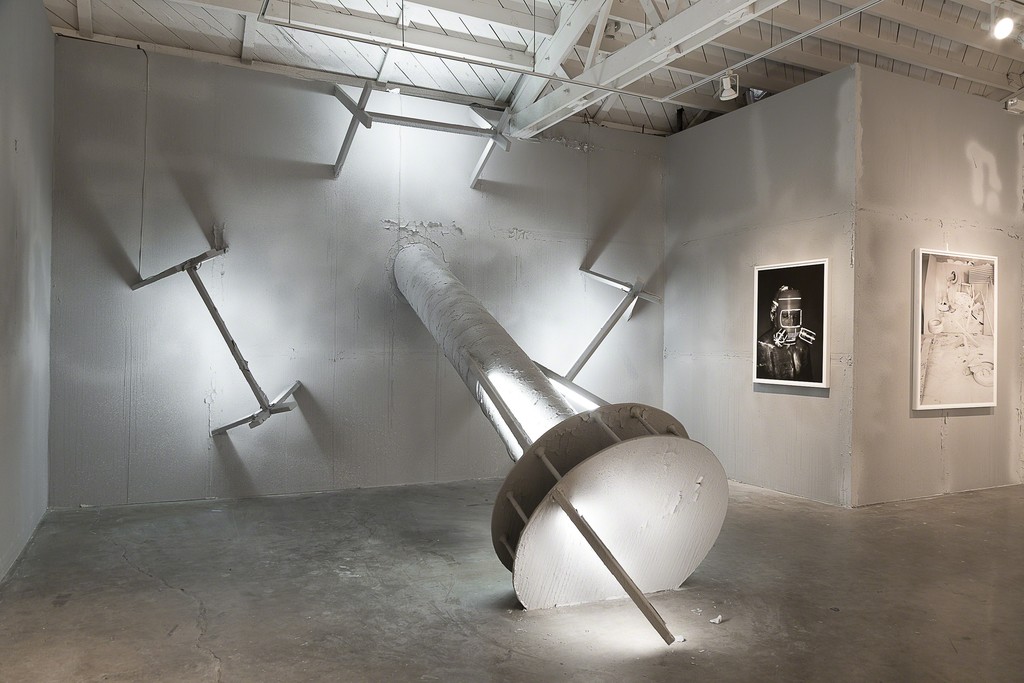 KLOWDEN MANN is proud to present General Song, the gallery’s second solo show with Los Angeles-based artist Rodrigo Valenzuela. The exhibition features Valenzuela’s 2017 photographic Barricade series, as well as new photographic works from his 2018 Mask series, a large sculptural installation, and two works from his 2015 series Trophy Room. The show will be on view from February 24th through March 31st, 2018.

In General Song, Valenzuela abstracts and adapts images historically associated with protest. Drawing on his longtime interest in poetic resistance and his experience growing up under the dictatorship of Augusto Pinochet in his native Chile—as well as research on resistance movements in countries such as the Ukraine and Venezuela—the artist focuses on simple physical structures that people build in times of oppression as a means to explore civil disobedience, as well as the masks worn to protect against the authoritarian response to dissidents. The title of the series refers to Canto General, Pablo Neruda’s volume of poetry which was first published in 1950, and narrates the history of the Americas from a Latin American perspective.

The exhibition is built around Valenzuela’s Barricade series, which began during his residency at Light Work in Syracuse, New York in 2017. Utilizing a process originally developed for his 2015 exhibition at the Frye Art Museum in Seattle, Valenzuela built barricades in his studio using materials historically associated with protest such as cinder blocks, pipes, wooden palettes, folding chairs, corrugated metal, and tires, Valenzuela photographed the installations with a medium-format film camera, then creating large-scale prints and affixing them to the walls behind the original constructions. Finally, he rephotographed them, creating the illusion of a deeper and continuous space. The finished works allude not only to protest barricades and political activism in Chile, but also to the boundary between reality and fiction in contemporary life—one that is increasingly difficult to navigate.

Recently appointed to the Department of Art faculty at UCLA, Rodrigo Valenzuela (b. 1982, Santiago) completed an art history degree at the University of Chile in 2004, then worked in construction while making art over his first decade in the United States, completing an MFA at the University of Washington in 2012. Valenzuela’s many residencies include a Core Fellowship at the Museum of Fine Arts, Houston; Skowhegan School, Maine; Bemis Center, Nebraska; MacDowell, and the Center for Photography at Woodstock, New York, among others. His work is in the collections of the Frye Art Museum, Seattle; Samuel Dorsky Museum of Art, New Paltz and Dimensional Fund Advisors, among others. Valenzuela was in Open Sessions 10 at The Drawing Center, New York and in the group exhibition Where Do We Stand? Two Years of Drawing with Open Sessions.